Armenia – a drive from South to Centre

When travelling, I tend to use more local means of transport like bus, minibus and train. In Armenia, however, it is organised in such a way that almost everything goes to/from Yerevan and you don’t have soooo many connections in between. And so it would have taken me quite a long time to get to my next destination with a diversion via Yerevan. I took a look in my wallet: I had spent much less than calculated (40,-/day). So I treated myself to a taxi ride – which is not particularly expensive. But it was also an experience I enjoyed.

I started in Goris and said goodbye to Mrs. Mira, owner of the hotel of the same name, which I thought was very good. And Mrs Mira is also a warm good woman 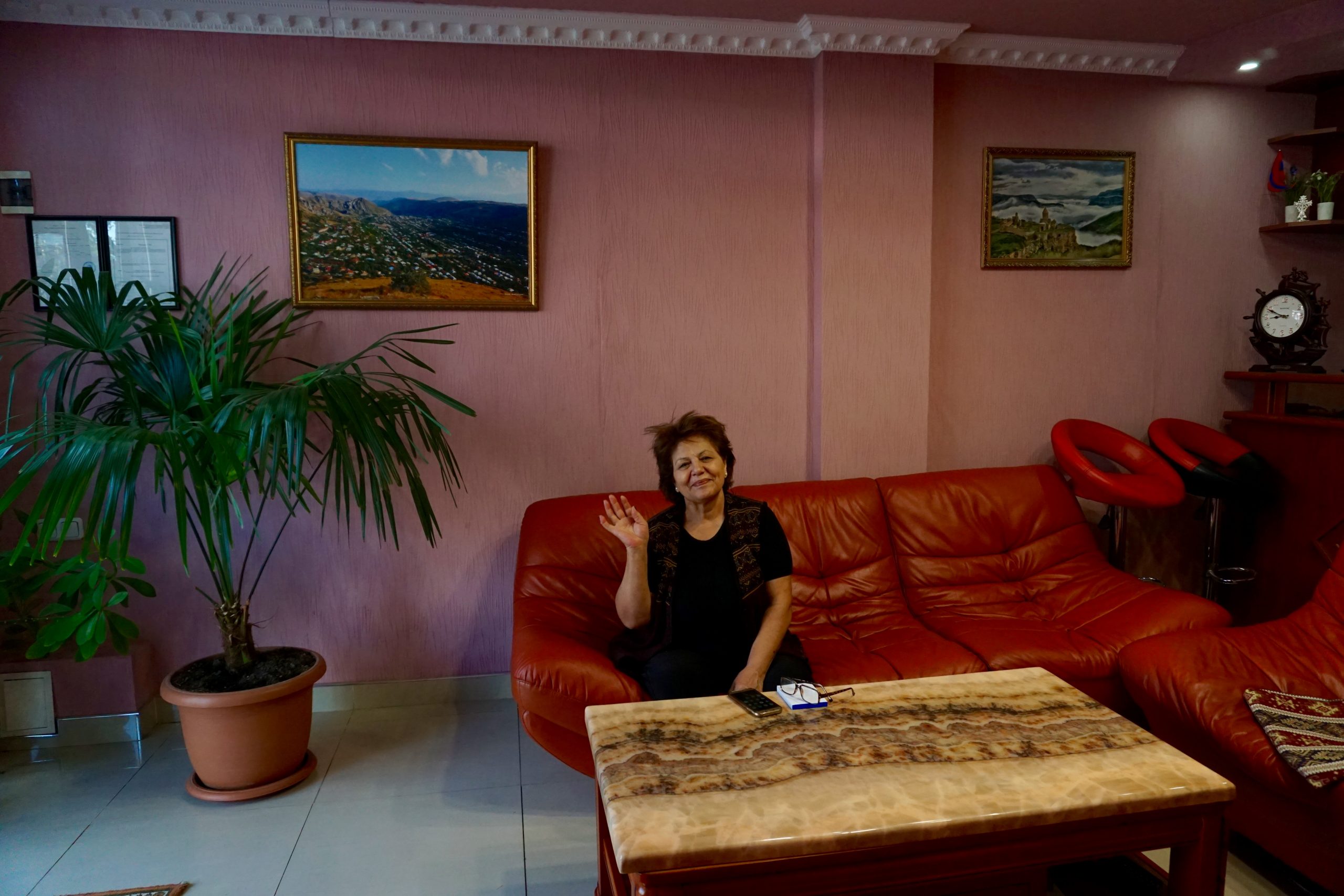 Mrs. Mira in her hotellobby

When you ask people to take a photo and they agree, they often raise their hands in greeting and beam into the camera. Not so my taxi driver. He roared up in a Mercedes, his trousers bristling and his face frowning. His name is Garik and he doesn’t speak English. 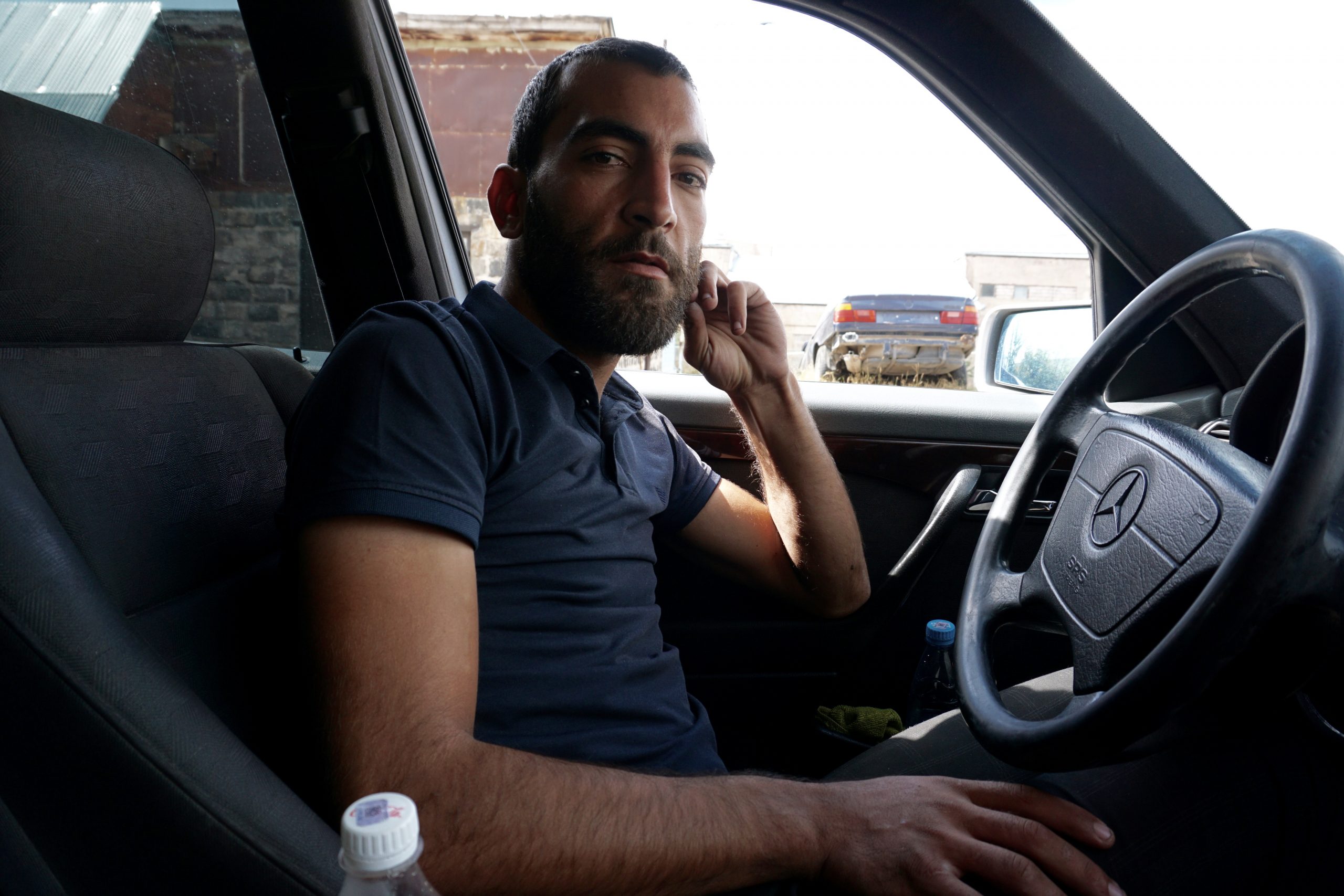 Garik drove very fast and snappy and I don’t know how fast because his speedometer was broken. He was good at multitasking, talked on the phone all the time and avoided all the pitfalls of the road brilliantly. Music was playing the whole time, very very sad-sounding Armenian songs. The sun was shining at the start 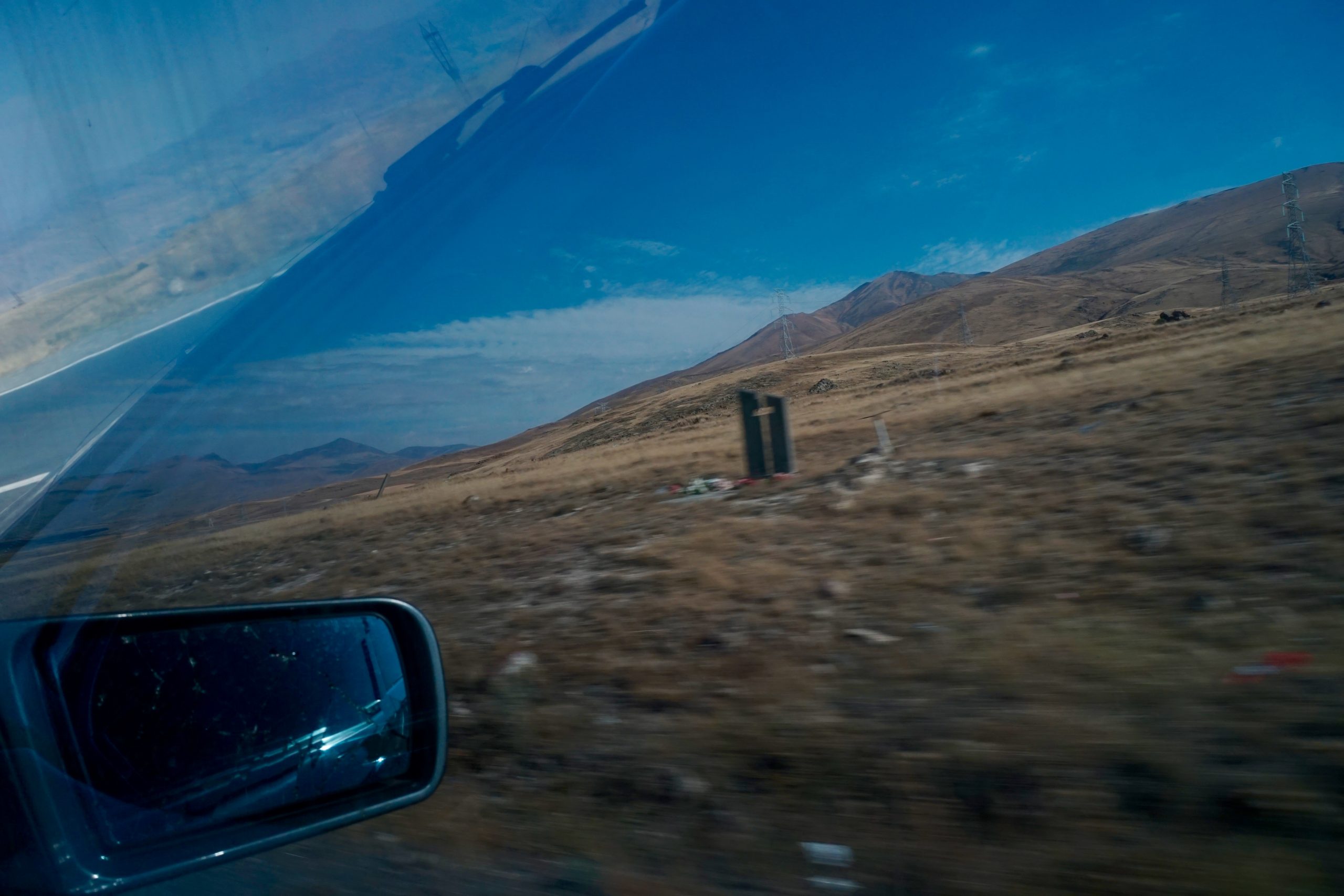 There were many Iranian trucks on the road – it is the best connection between Iran and Yerevan. 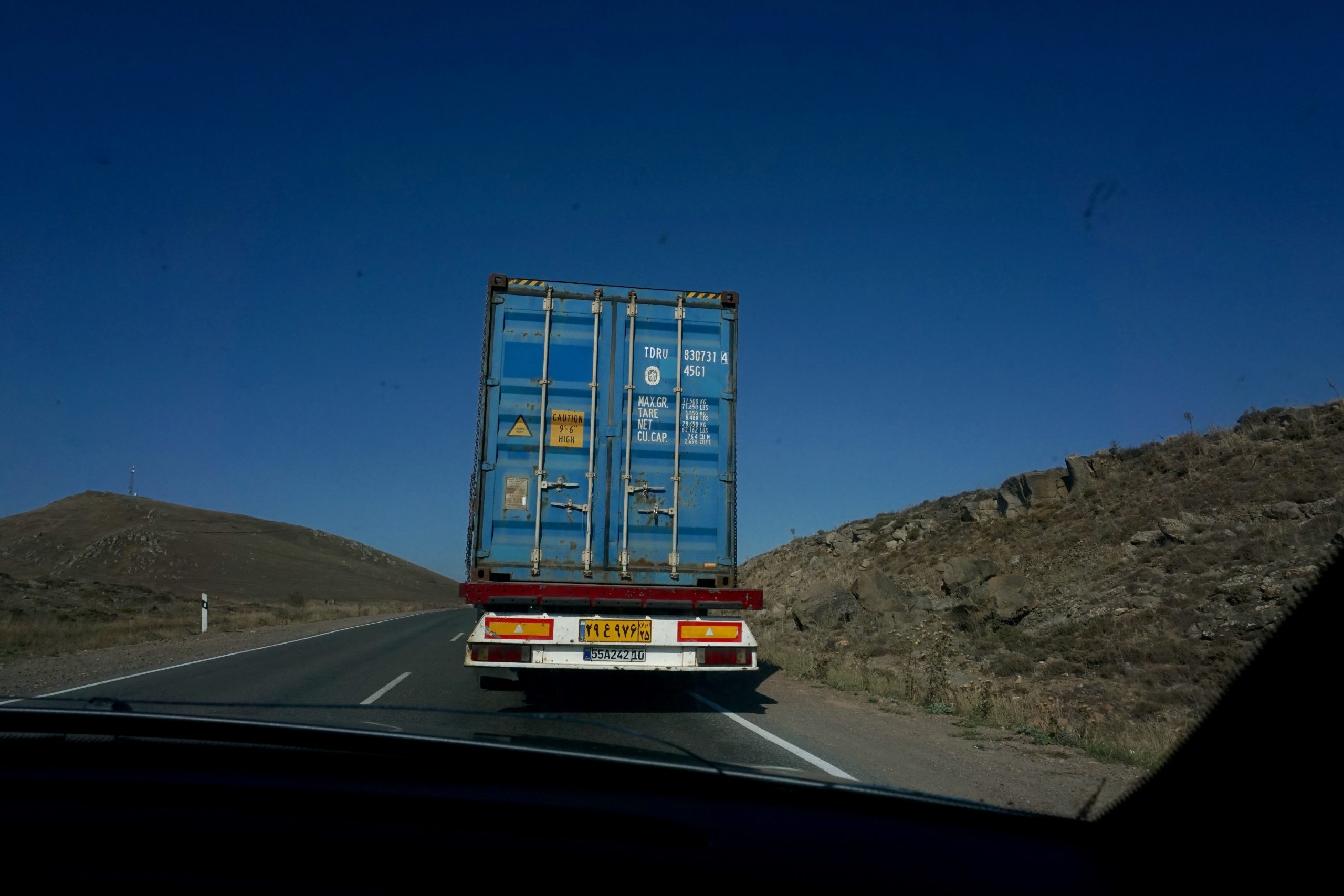 There was one place where they were all standing around and you had to stop. I don’t know why exactly. But small cars were soon allowed to drive on 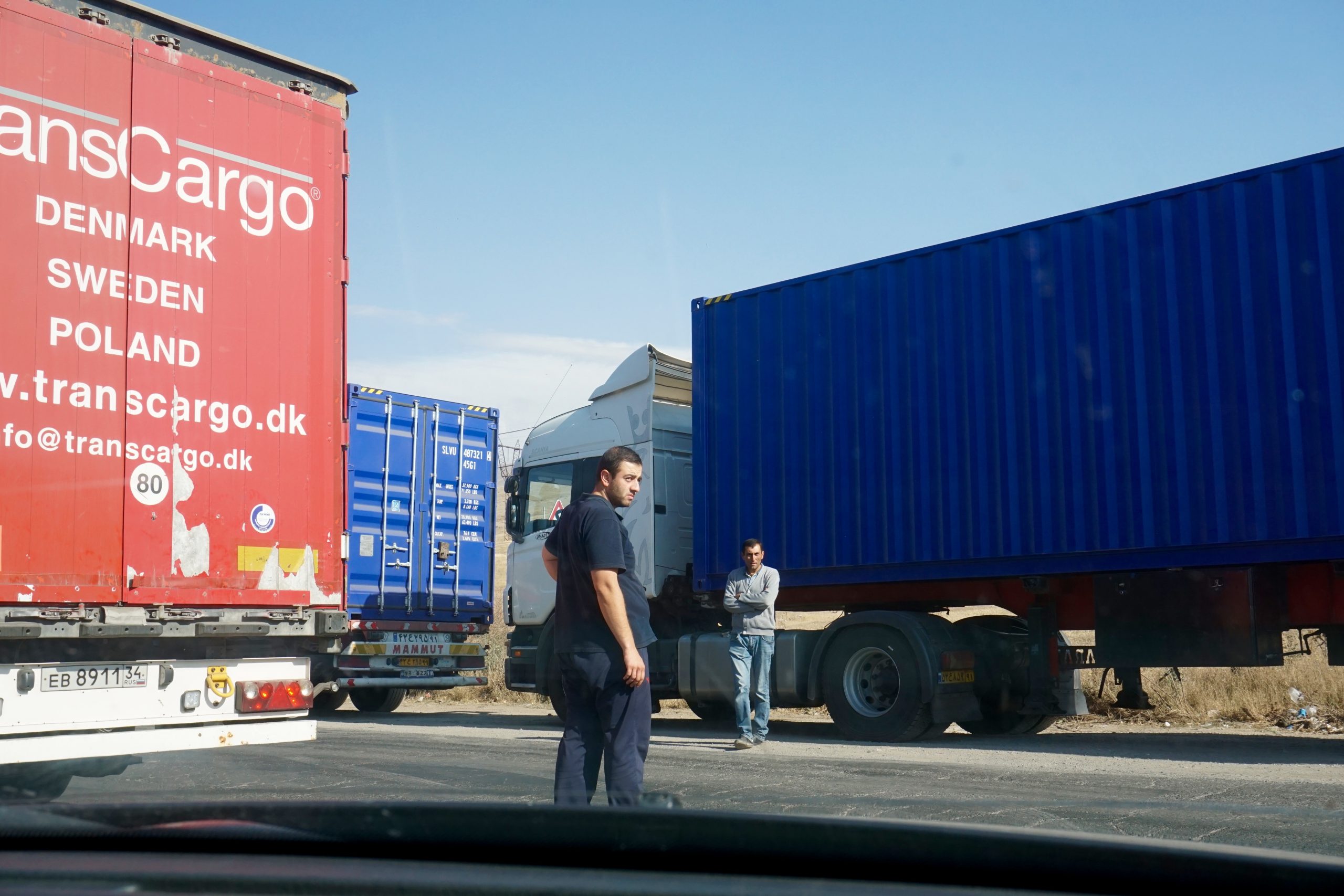 We also passed 2 big posters with Putin, but what exactly they said: no idea. 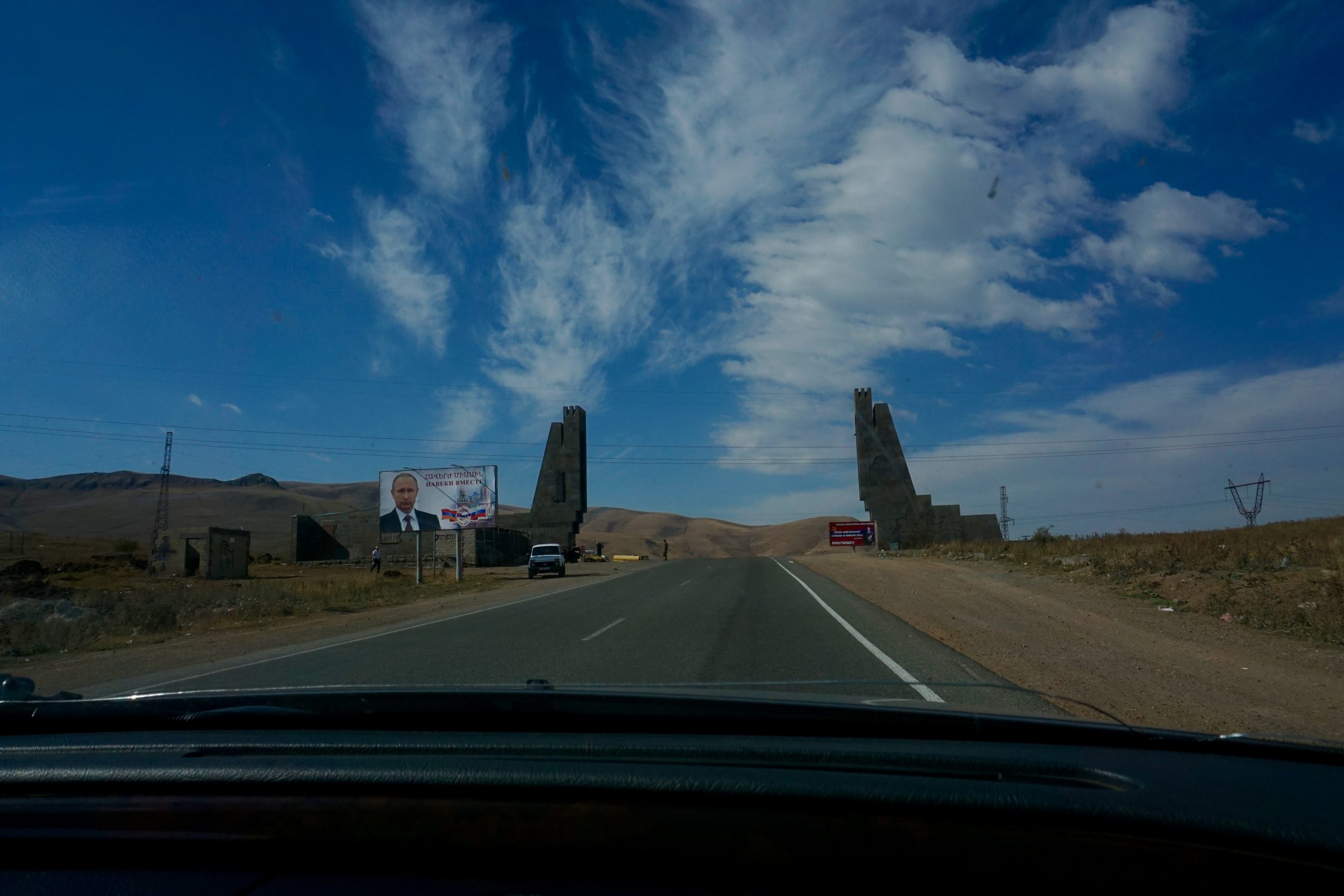 Putin on a poster next to a monument

And we met cows on the road which stopped us 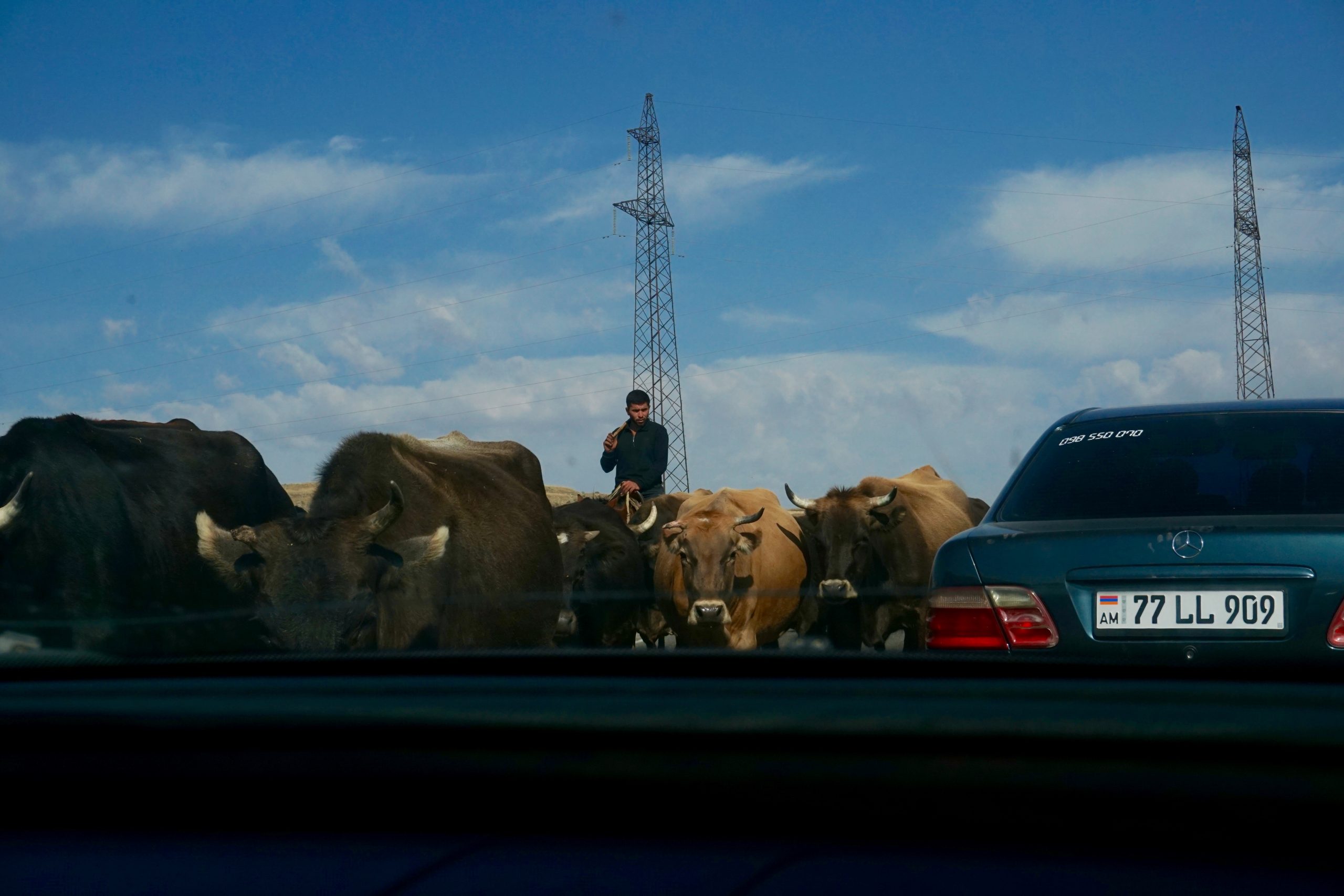 cows on the road

And then we met camels! A man was walking along the road with two of them. Garik also thought this was worth seeing and drove at camel pace speed for a photo. 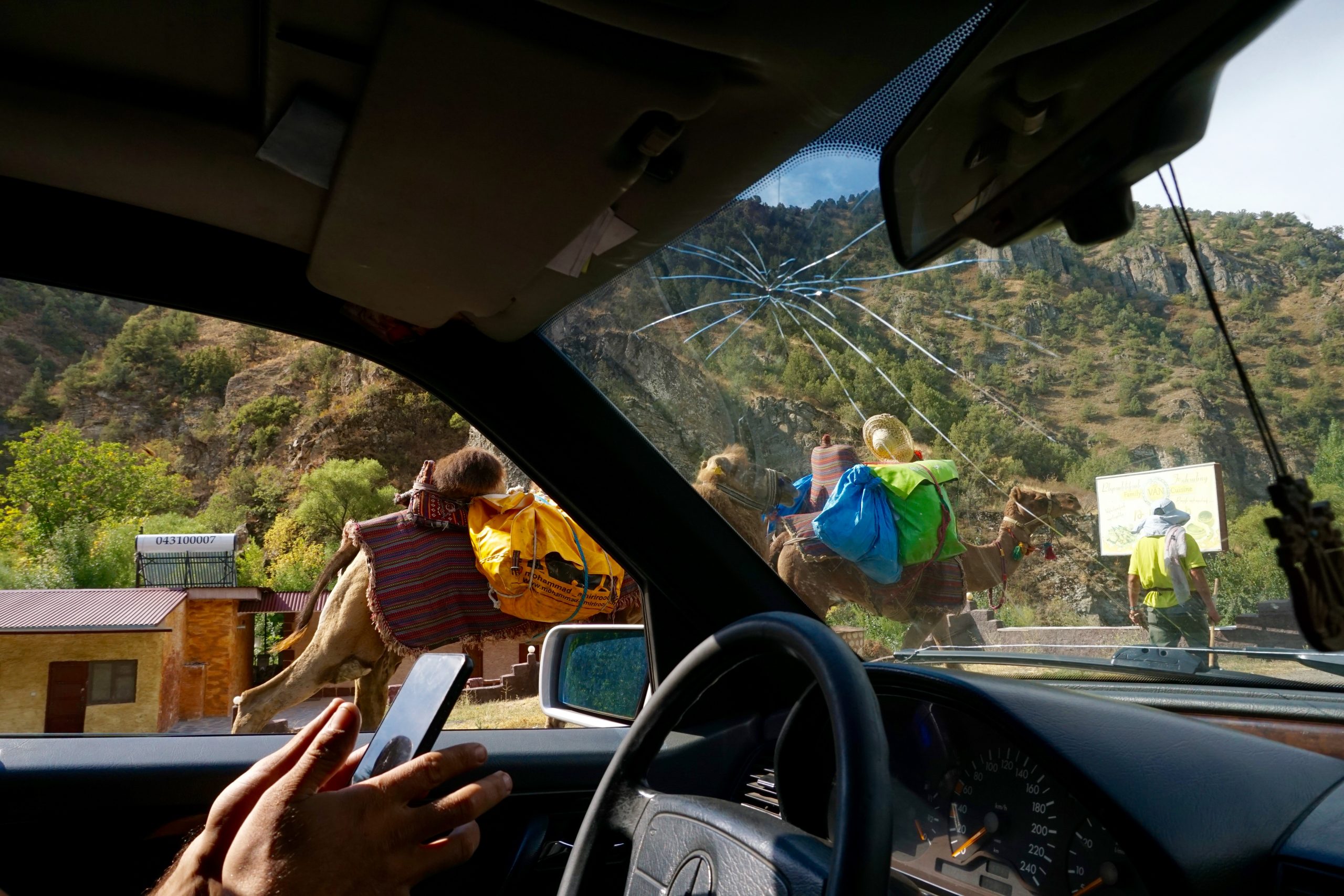 The only camels I saw in Armenia

We also saw herds of sheep, not on but next to the road. 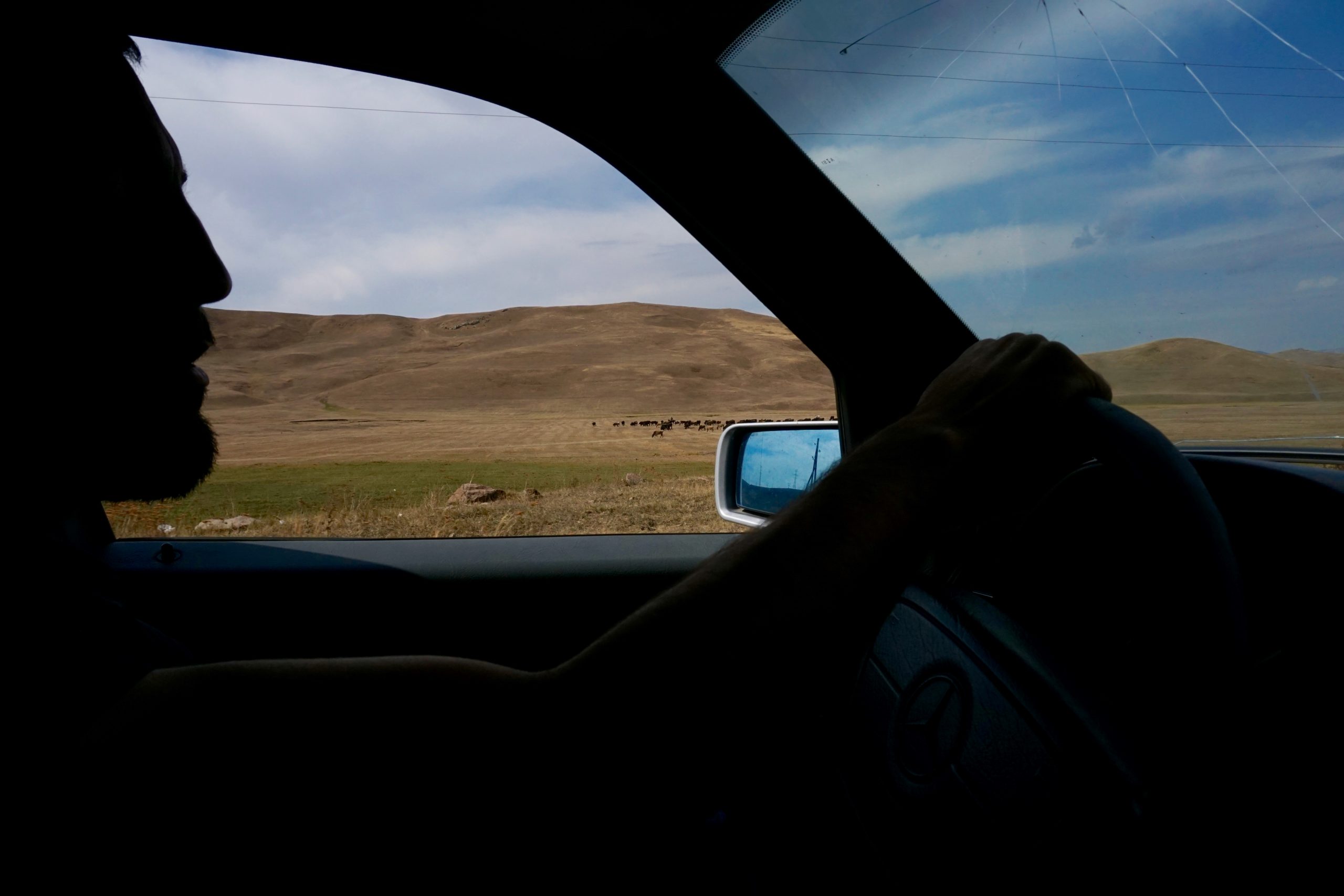 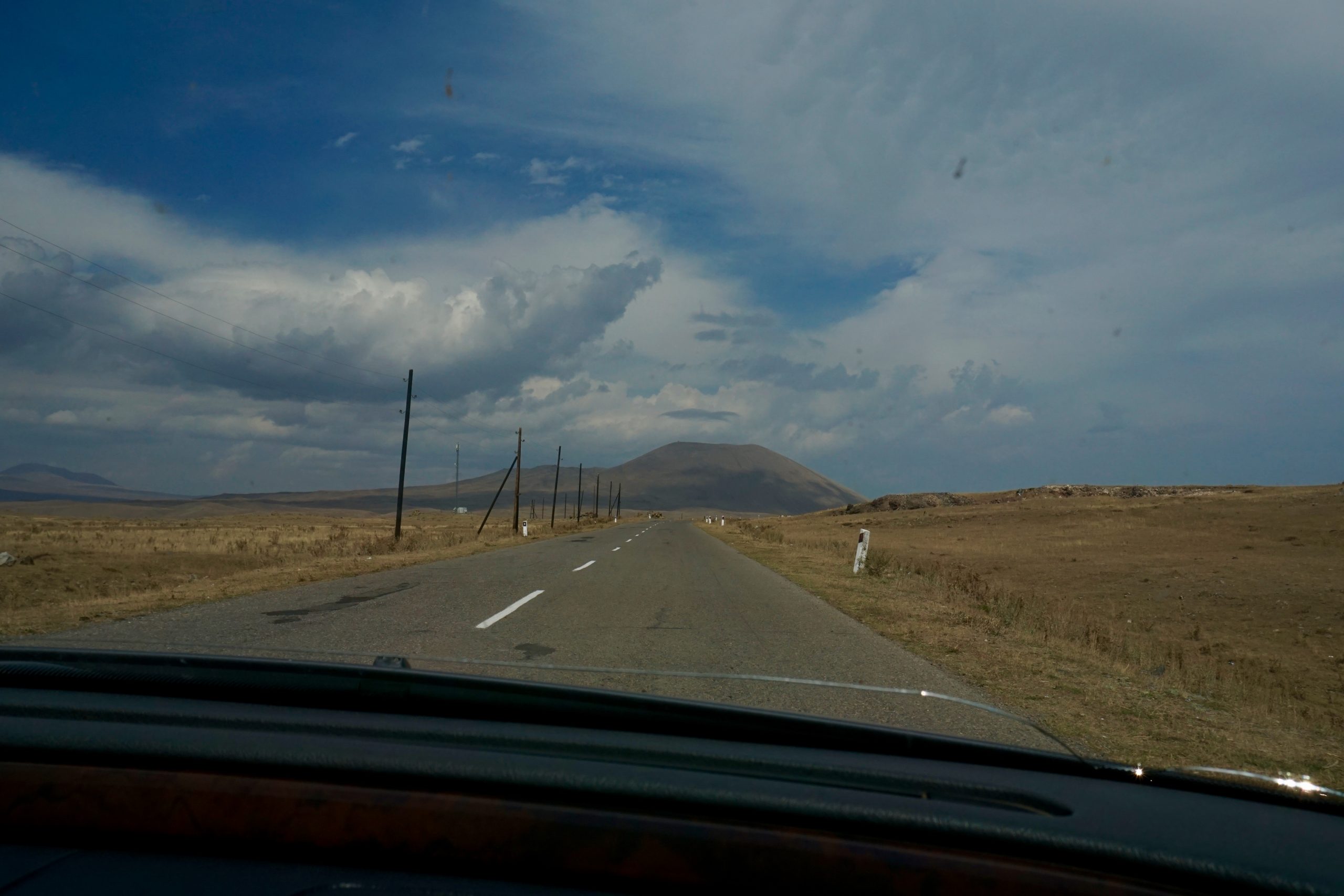 Here Garik was keen to stop and disappeared with the gentleman into his hut and soon came out again. Dubious business??? Otherwise, the gentleman sold dried or smoked fish draped along the road 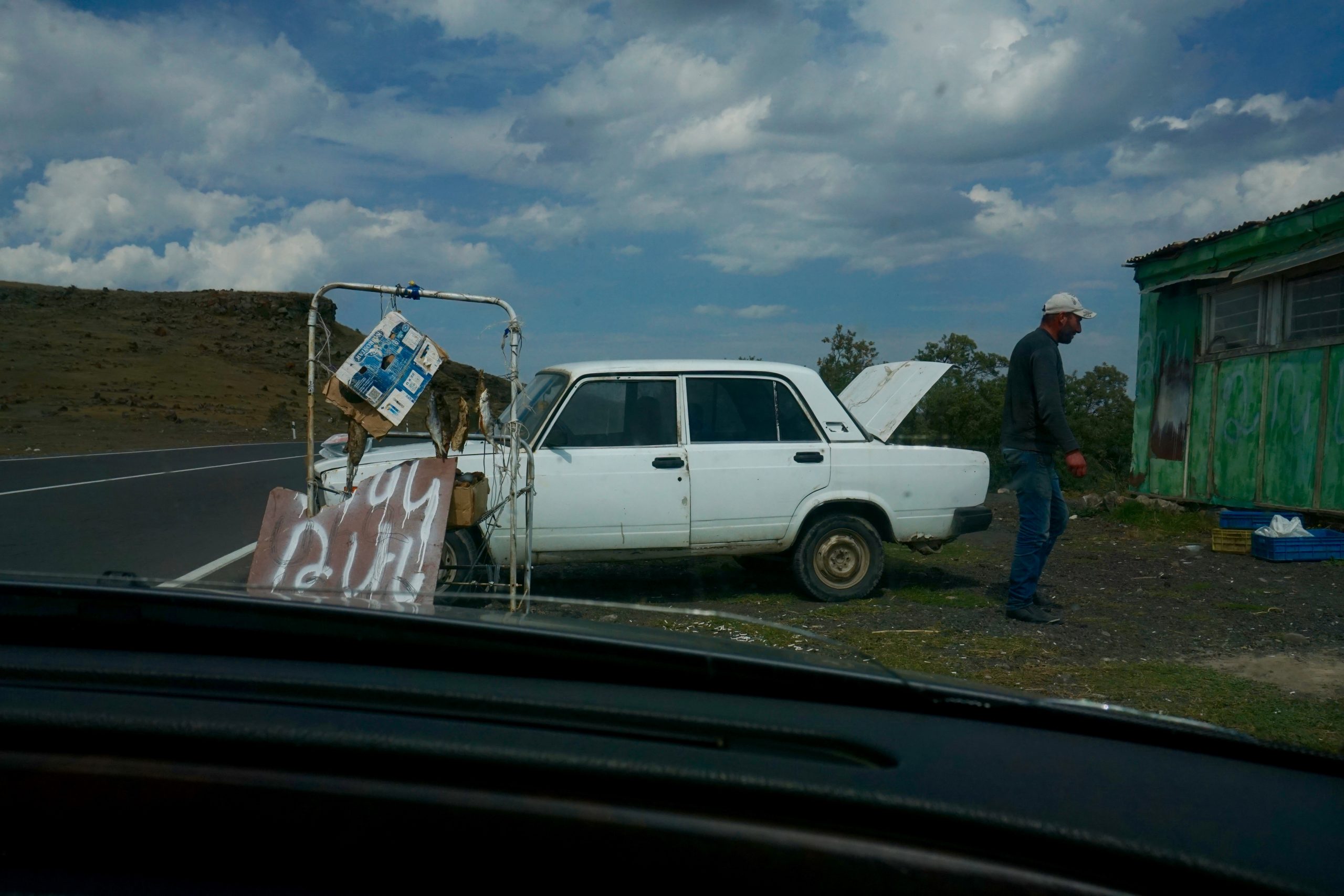 Do you have any idea now where I was heading? Yes! To Lake Sevan! One of the largest lakes, 78 km long and situated at 1,900 m. It is a protected area, which means that fishing is limited. The fish on offer were not too many either. 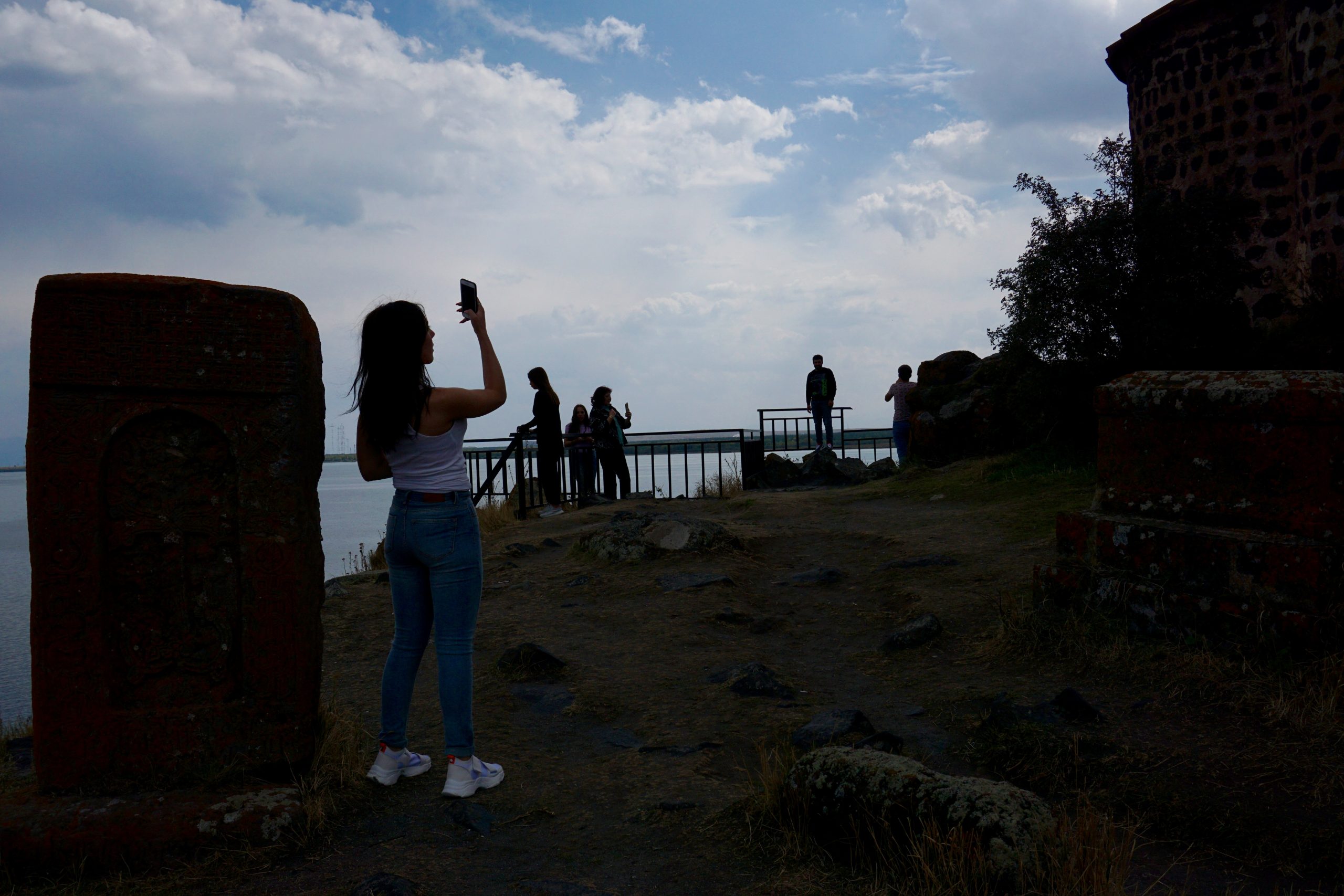 I didn’t find the monastery really remarkable and didn’t take a pretty picture, only of the few other tourists who were also there. I also took a picture of the lakeshore. In pictures, Lake Sevan always looks so pretty in turquoise blue. Not in overcast weather. 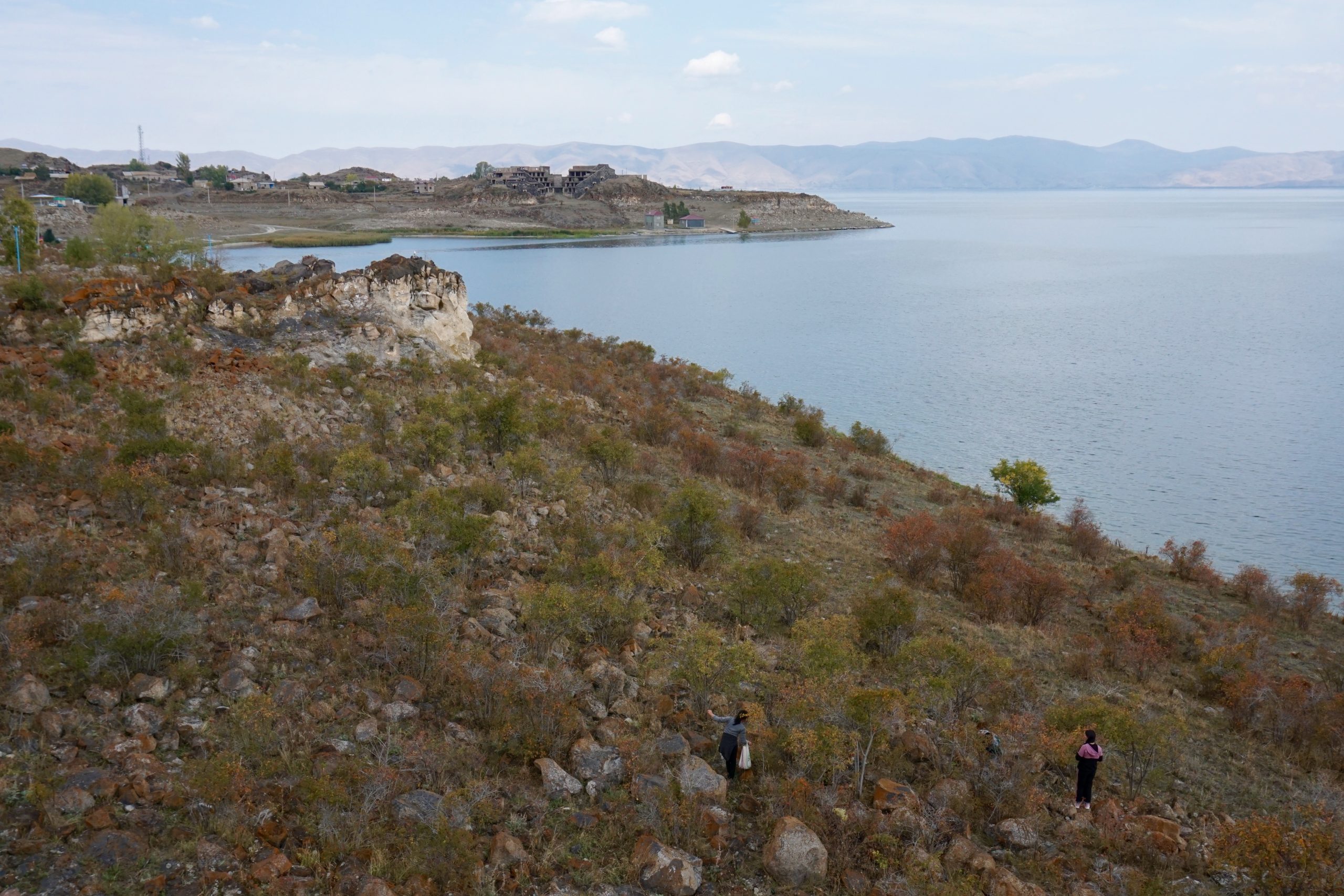 And then we were quite quickly in Sevan, a place in the northern part that I thought was the centre of bathing tourism. Whether that was true and what it was like there – that’s in the next blog post!