Armenia – … and deep inside is the sadness

Today is my last day in Armenia. There are thoughts about what I have experienced and I feel compelled to write them down and publish them now instead of keeping them chronologically for later. What lies between the taxi ride and today, however, will also be reported on.

Yesterday I took a taxi to Gyumri. Gyumri is the second largest city in Armenia and suffered greatly in an earthquake in 1988. 25,000 dead. When I told the older taxi driver that I was from Germany, he got all excited and tried to tell me something with gestures, a few English words and Armenian. His boy, he was – he pointed to his back with a bit like shooting – Karabakh. And then he scurried around on his mobile until he found what he was looking for: a video of a young man doing gymnastic exercises in a hospital bed. His boy. It stirred him up and he wanted to make sure I understood. Germania Doctor. I understood that he had a German doctor, but that was really a minor matter, the important thing was that his son had been injured in the war and was now struggling to get fit to carry on.

We passed what must have been a large military cemetery right on the road. I was told not to get out of the car, but to look and take pictures. In the short time, I only saw that at least the front gravestones all bore the date of death 2020. Some of the years of birth had a 2 in front – so they lived to be 20 years old at the most. 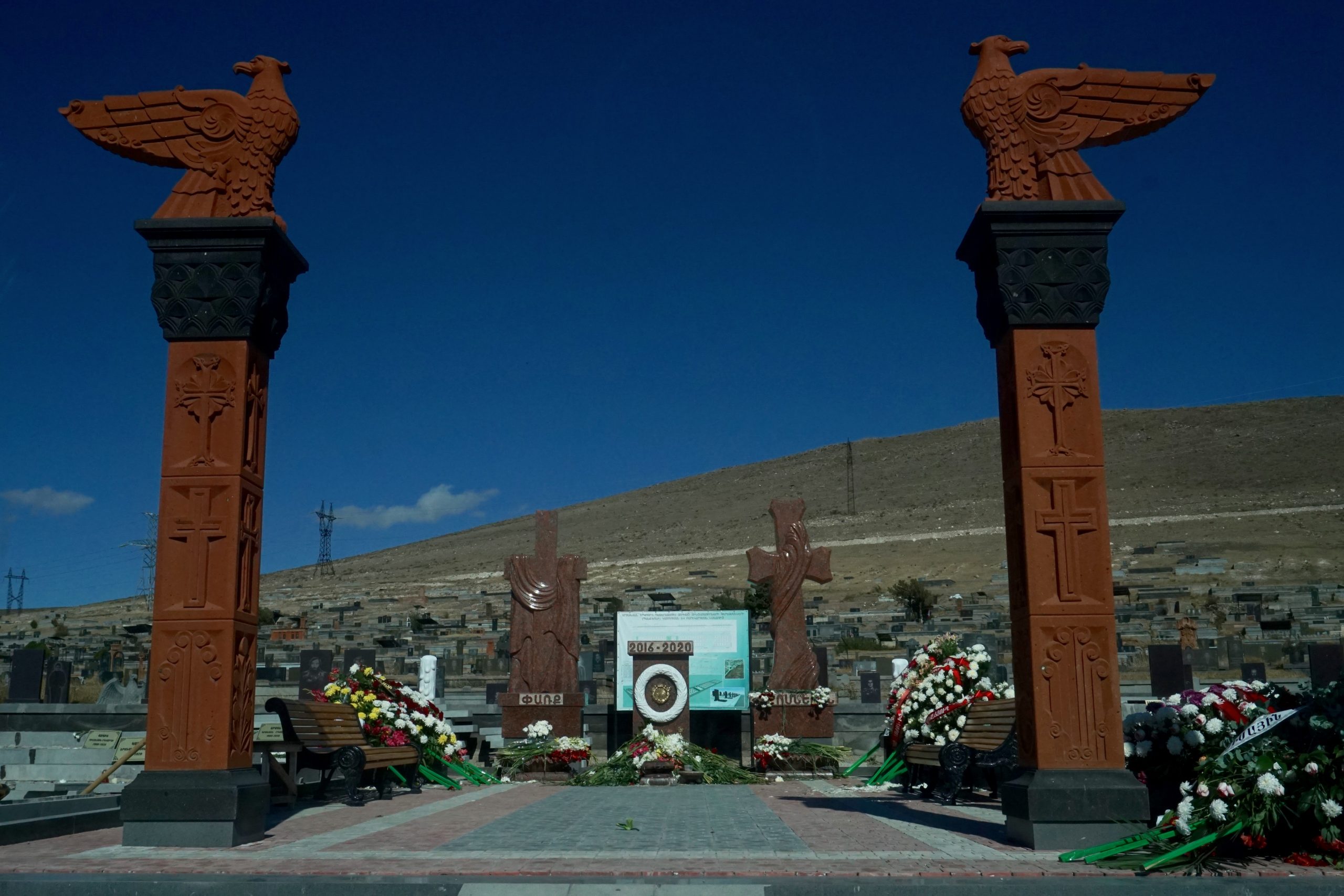 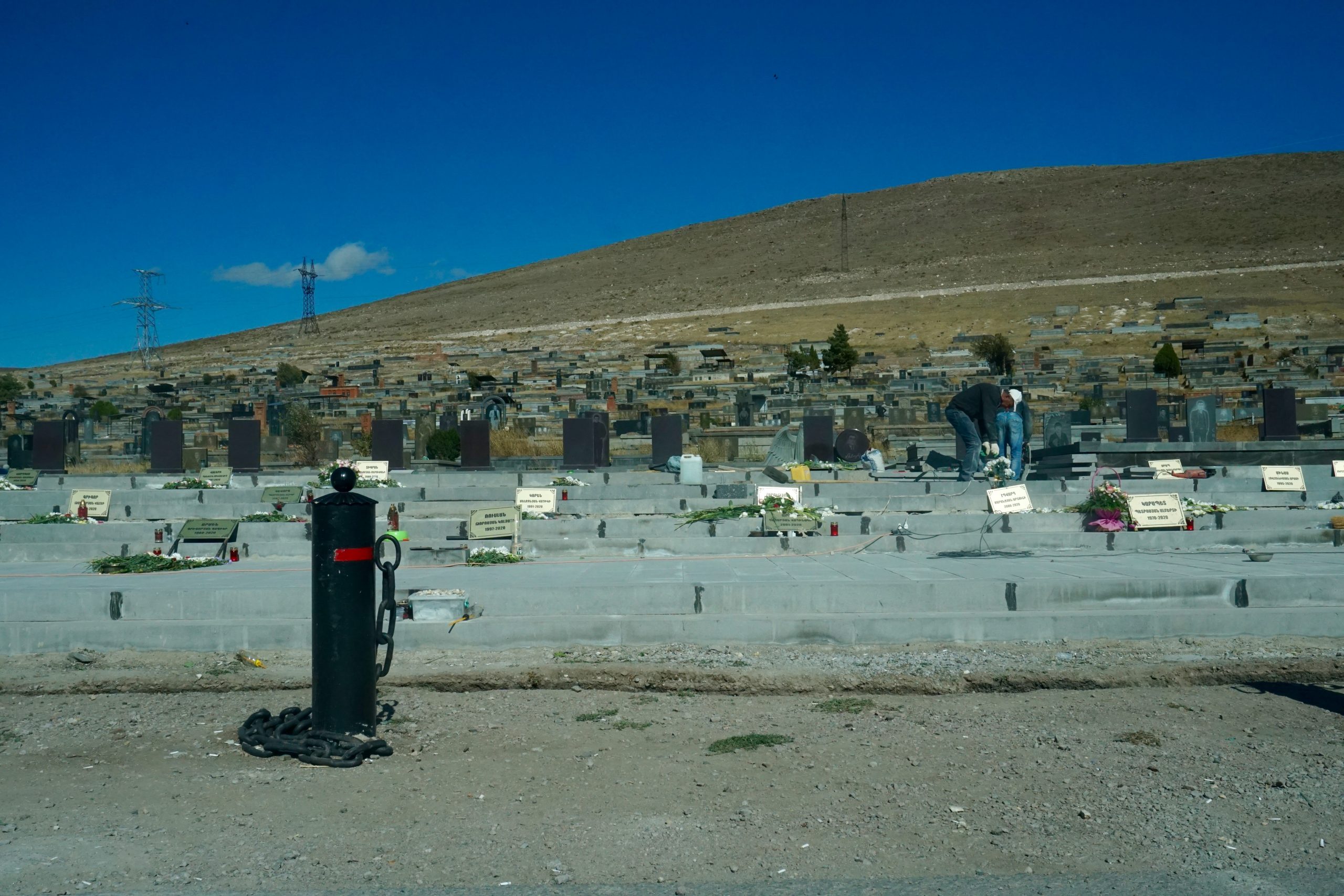 At least the front gravestones are from 2020

Radio Armenia also has an English-language website (herehier) – it said yesterday that Azerbaijan is being asked to release the prisoners of war.

The genocide, the occupation of the Soviet Union (although some see a positive side to it, there was an economy and the higher positioned were not only out to enrich themselves), Nagorno-Karabakh (since 2017 they call themselves the Republic of Arzakh) with the latest war in 2020, the earthquake in 1988, not as supported by the international community as they would like. Armenia is badly shaken and this sadness about it seems to me to be like a dark cloud in the country, inherent in the people.

That makes me rather sad, too. I have rarely laughed so little on a trip as I did here. At least in my memory. And I am always shocked by the facts. There’s a lot I didn’t know, some of it half-bakedly sorted away in the back of my brain – I have to be there to become more receptive and interested.

In my past, I have dealt extremely little with the Eastern Bloc. I grew up with the Wall and what was east of it didn’t interest me. Maybe a bit embarrassing, but that’s how it was. And now I’m taking it in slow doses – 1992 cycling tour through Mecklenburg-Vorpommern, 1998 car trip to the Czech Republic/Slovakia, 2005 Estonia, 2008 Georgia – 2021 Armenia.

That I wanted to go to Armenia, that stuck with me many many years ago. I didn’t know anything, didn’t inform myself, but it stayed with me (although there are other areas that are stuck there, too). I wonder today what it was that actually got stuck there. Reality certainly wasn’t. In contact with reality I realise that my expectations must have been different, otherwise I wouldn’t have been so surprised. But that’s also something I like in principle: not knowing much, going somewhere, looking – and then really getting interested.

But even when I’m sad – it pushes me to experience the realities elsewhere during my existence.  How differently life and the world can be seen and experienced from other angles and points of view. And I too can change my point of view and let my gaze wander here and there.

When I travel and photograph, I think about how I can summarise what I have experienced subjectively. A little with words, a lot with pictures. Here I had a photo series idea relatively quickly: window views like this: 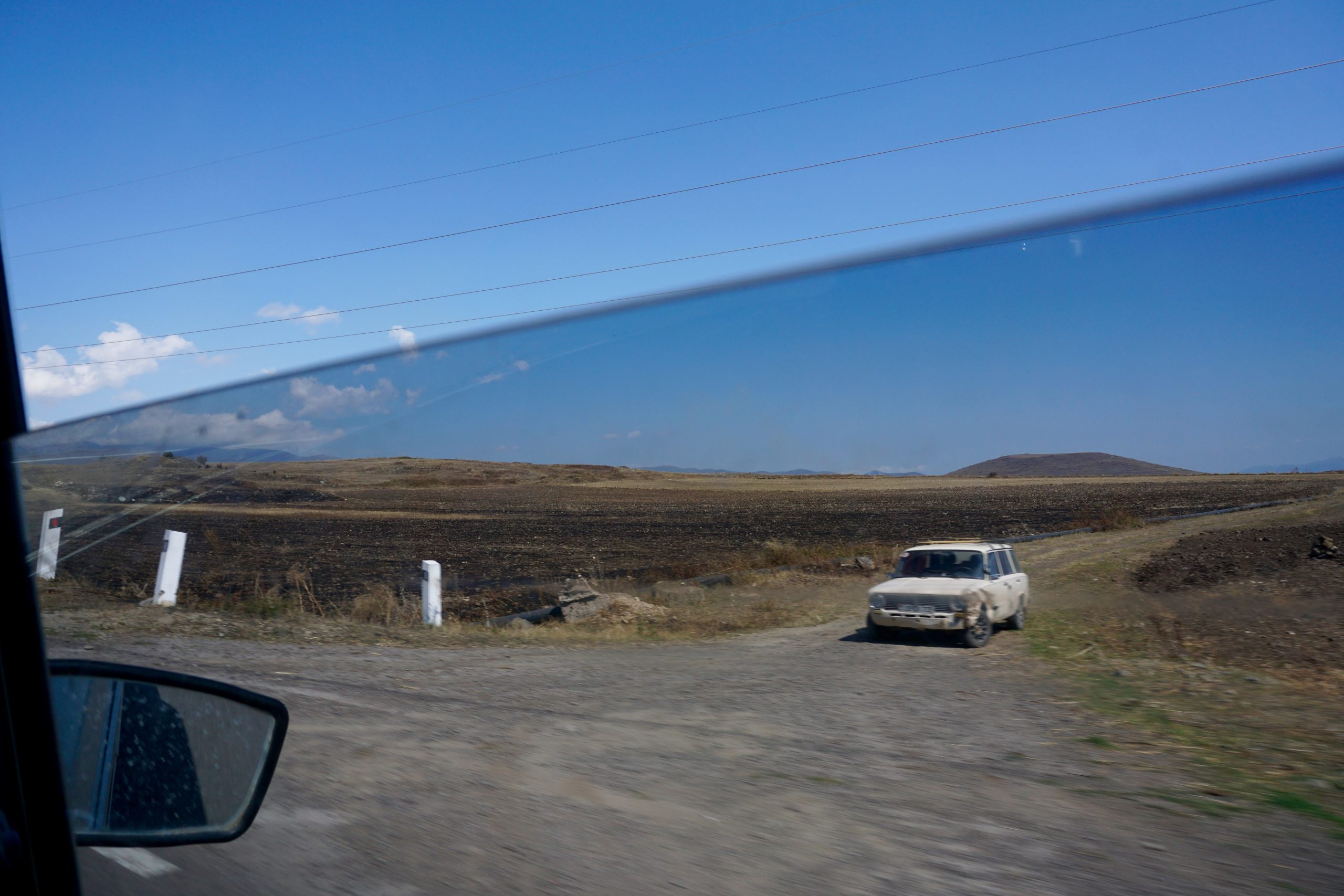 I have the feeling that I am not really getting close to Armenia – but experiencing it through a barrier. The lack of language is a big part of it (and not only the language itself, but also the content of what one could talk about). The different realities of life are another. Actually, this is true for most of my destinations except Central Europe – but here I experience it more clearly.

But I can also shift my point of view and perspective – and a different essence would come out. For example, that many things (opposites) can be there at the same time. I have seen many beautiful things here. I just remember a funny snippet of conversation about how I wanted to create common ground. Armine was complaining about the former olligarchs here who were pocketing the money and building themselves noble villas with golden lifts. I said that in Germany we had a cardinal who bought himself a golden bathtub. So we could shake our heads together.

I am satisfied inside when I can express myself and when I understand things. Tonight I was sleepless because I don’t really understand about Nagorno Karabakh/Arzakh. I have to look up so much and then make myself understand. At the moment, for example, I’m trying to understand international law. And to understand all these interests of Germany, Turkey, Azerbaijan, EU, USA etc. etc. in relation to Arzakh. Martin Sonneborn seems to have explained part of it quite well – unfortunately in german only

In a podcast, a woman said that someone from Armenia had said to her “We love to cry”. With the music during the taxi ride with Garik, it struck me as true. With the history and the present logical. And yet, I would also like to emphasise here: it is ONE point of view.

As I said, it makes me satisfied when I have found an expression. And it also gives me great satisfaction to have made a single image that represents Armenia as I see it at the moment: 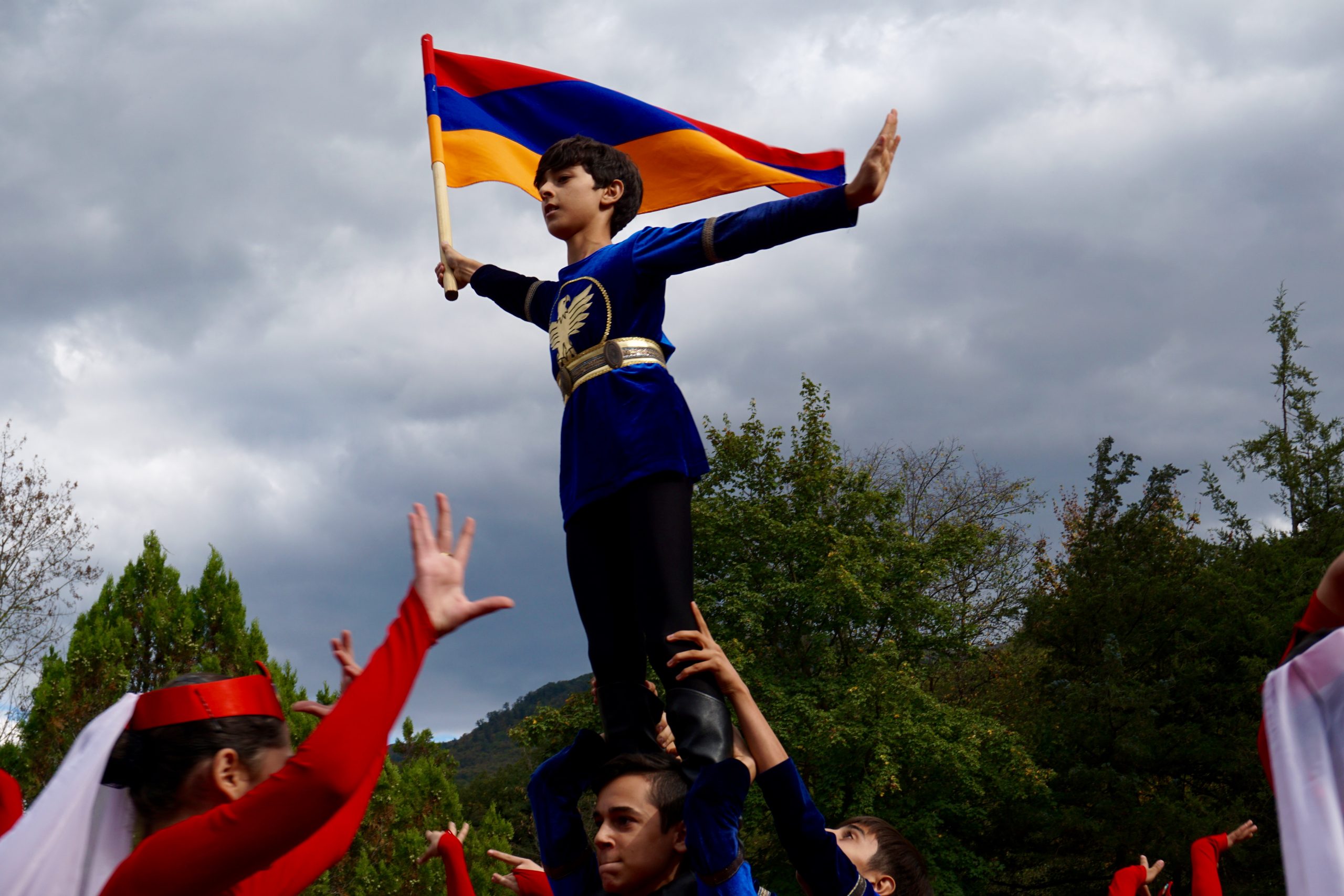 I had all the freedom on the trip to travel back to Georgia earlier. I didn’t want to and I am very happy about my decision. Including the sadness.

(I’m thinking: there will be an extra post about travelling and general – just this angle was important to me here).