I went to Armenia by night train. Back, I thought it would be nice to take a minibus during the day. That should work fine from Gyumri. First I needed a PCR test. While inTbilisi they are a dime a dozen in the city, in Armenia you have to look hard for one. I found a test centre that spoke very good English, was very neat and well equipped – but I have never had such a sloppy swab: poked into the front nostrils and wiped through the mouth (without the throat) – and in no time I was done and had the negative result the next day.

In principle, you can find the minibus departures on the internet, but the hotel staff told me to check the day before to see if there was really a bus. After some confusion, I found the minibus departure point, 3 men in a booth, one issued a ticket, the other translated briefly in English. Somehow it seemed dubious to me. According to the internet, the bus was supposed to leave at 10:00, 10:30 according to the man in the booth – and so I was there on time, was actually directed to a bus and sat there alone waiting and waiting. 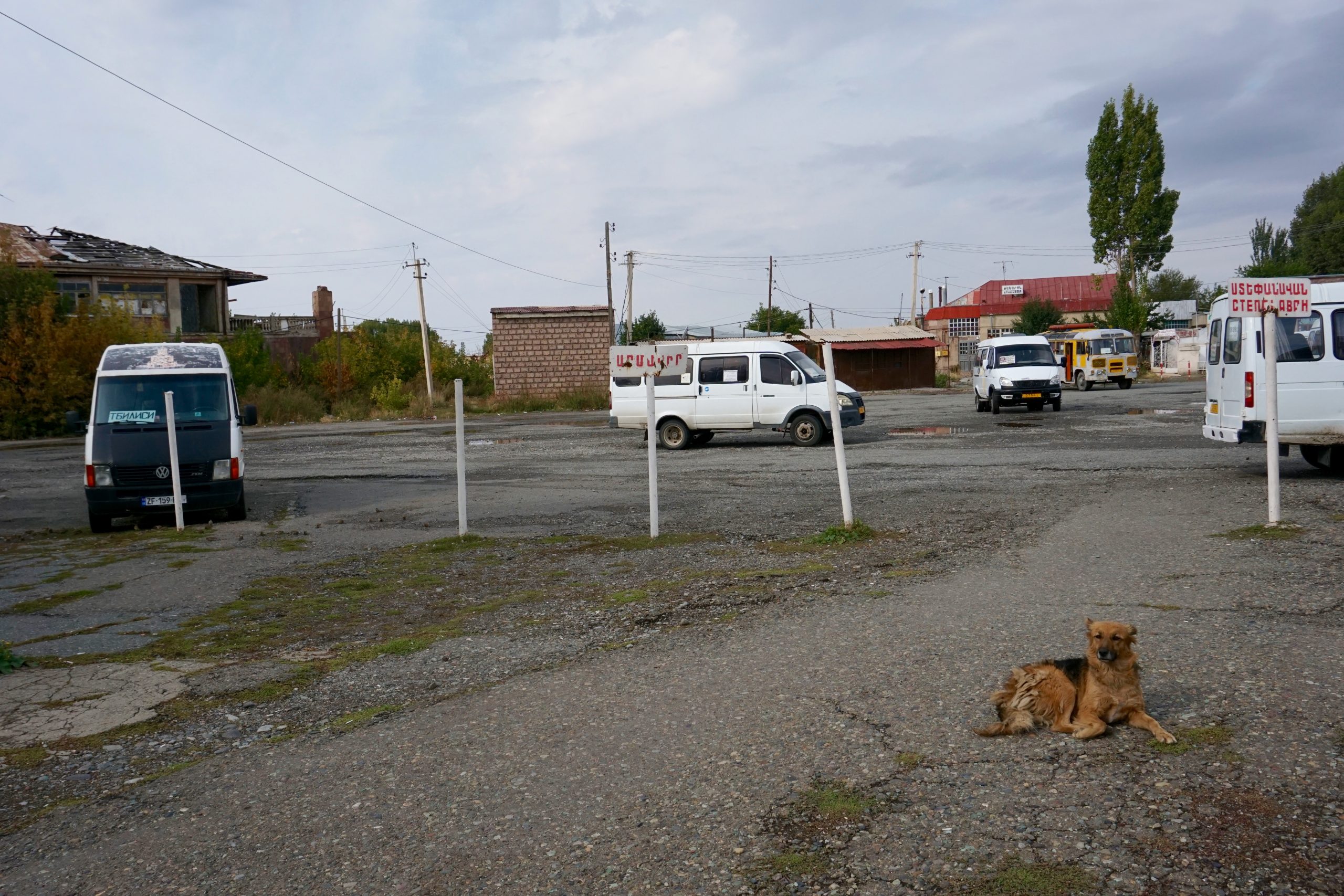 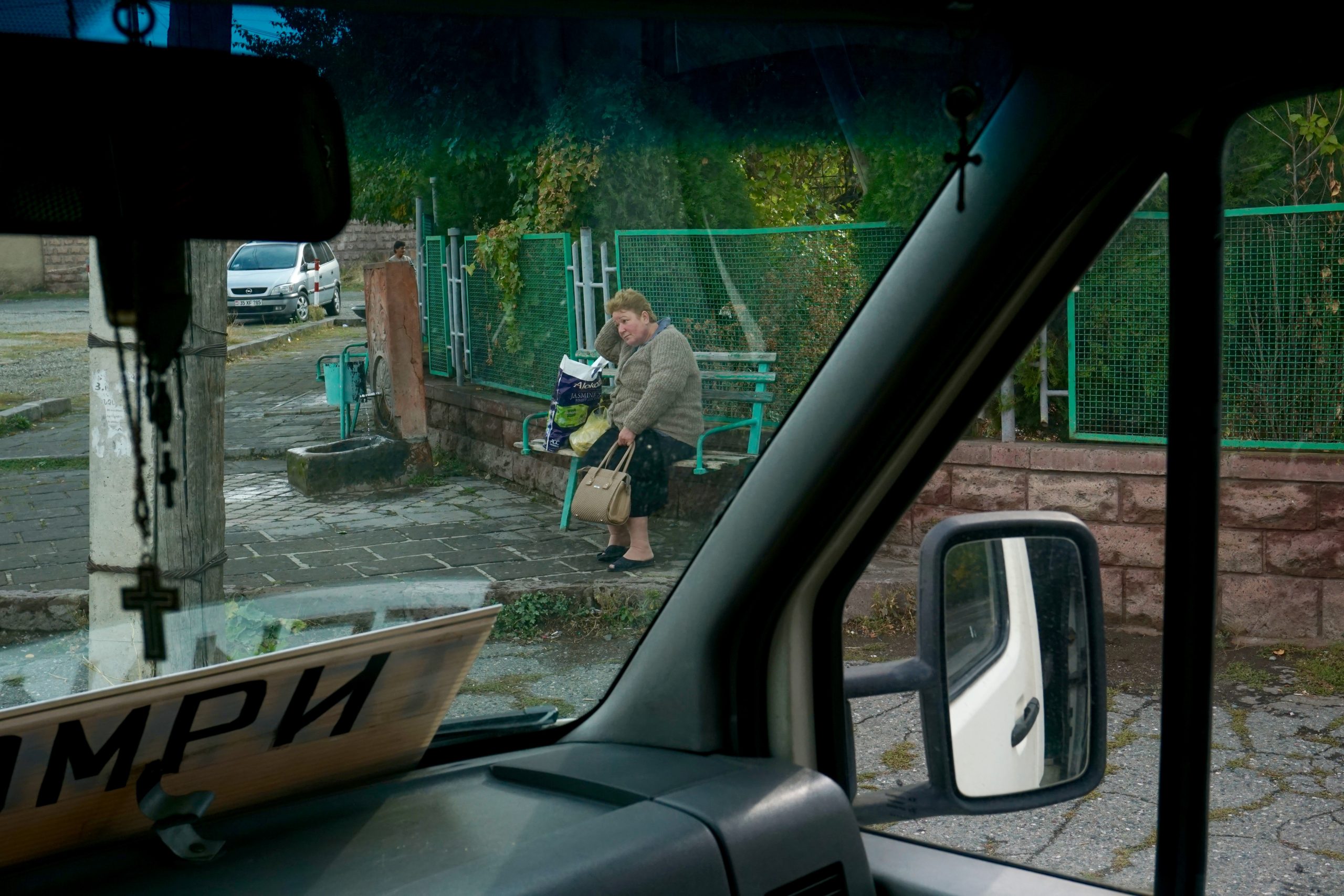 Waiting in the empty bus. The lady wanted to go somewhere else

Shortly before 11:00 a woman showed up, jumped on the bus, at 11:00 the bus driver too and off we went! First we drove to Gyumri airport – it had existed for the military for a long time and had just been opened for civil aviation. But there was no one who wanted to come along. 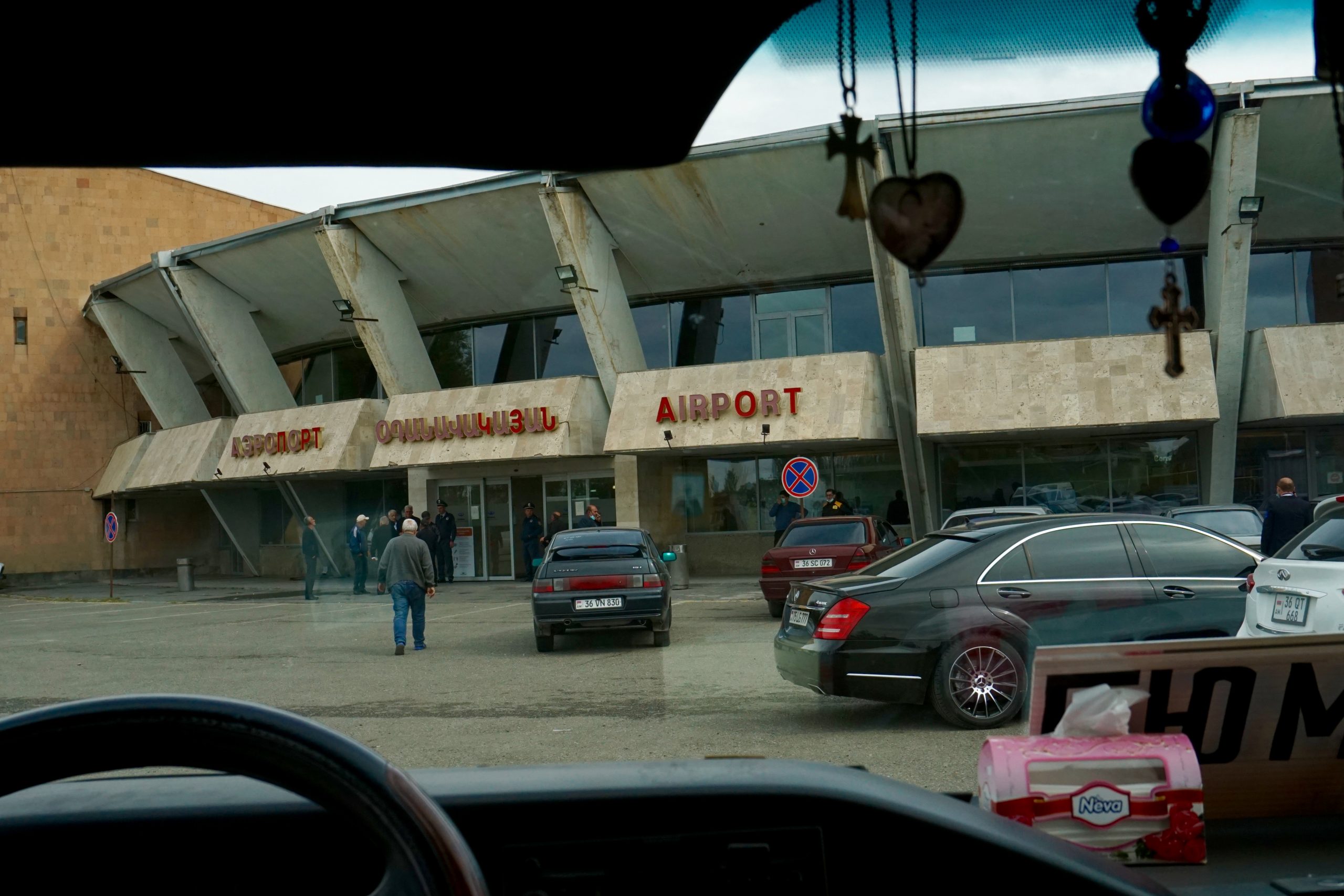 We drove back to the city and then towards Tbilisi. In the next town, the woman got out. Shortly afterwards we picked up a new woman. She really wanted to go to Tbilisi to visit her daughter. She didn’t speak English, but we became friends. She later guided me through customs and helped me a lot. But first we drove through the countryside. The landscape became more and more mountainous and looked different from the previous mountain landscapes. 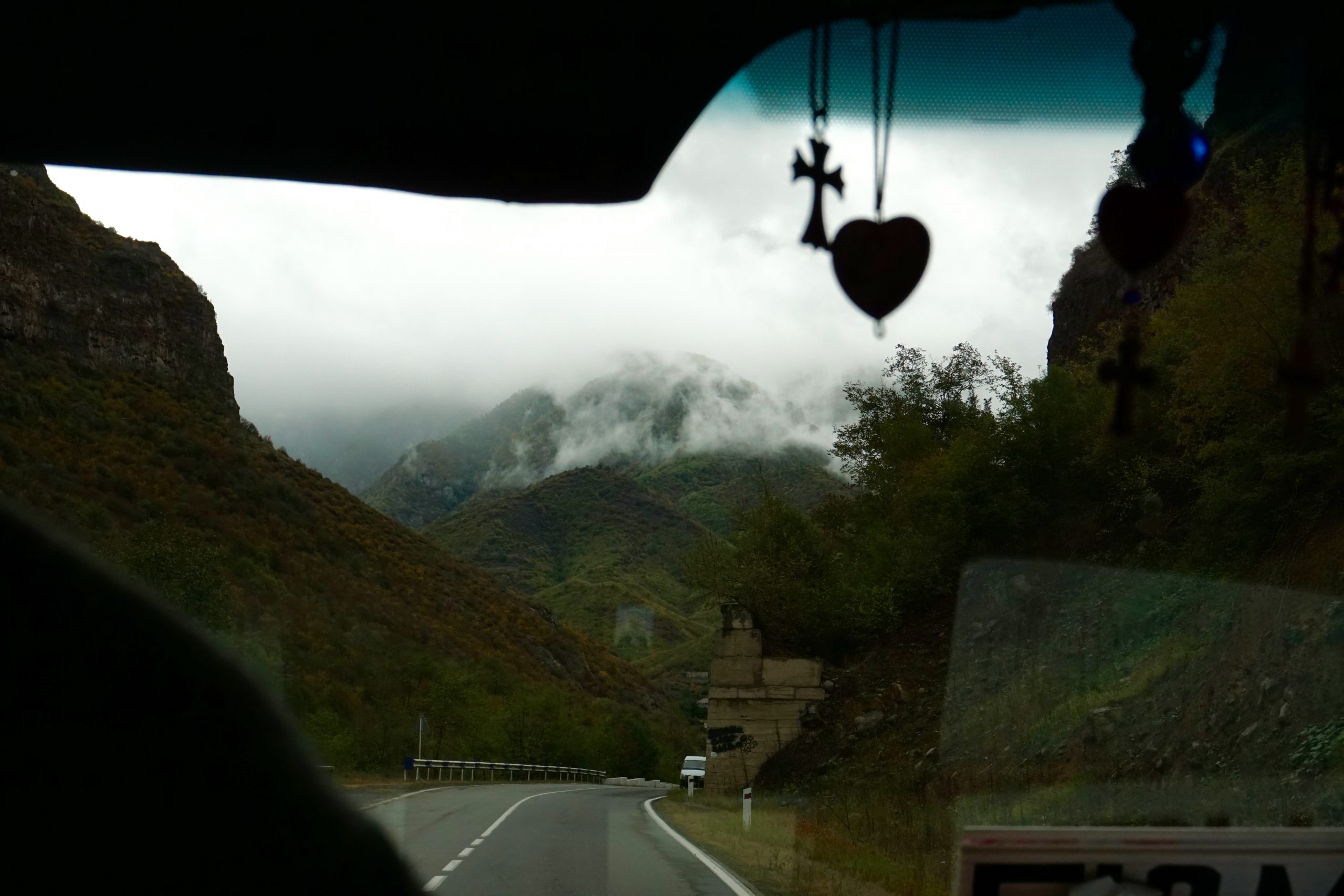 The driver obviously needed a little more faith in God in everything than others and had rigged his bus with symbolism: 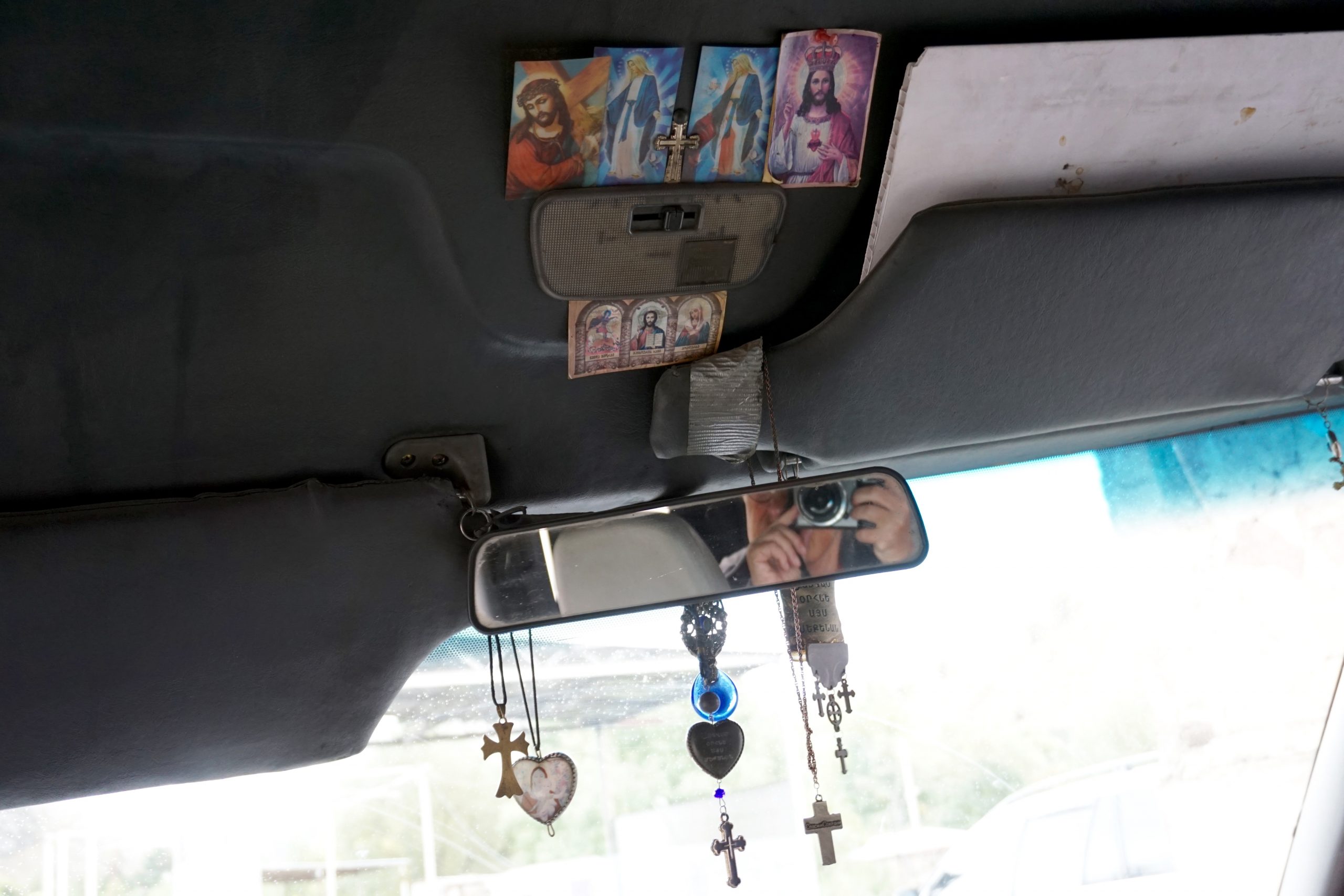 Unfortunately it was raining and very uncomfortable. I had entered the route into my mobile phone to see where we were going. It showed that: 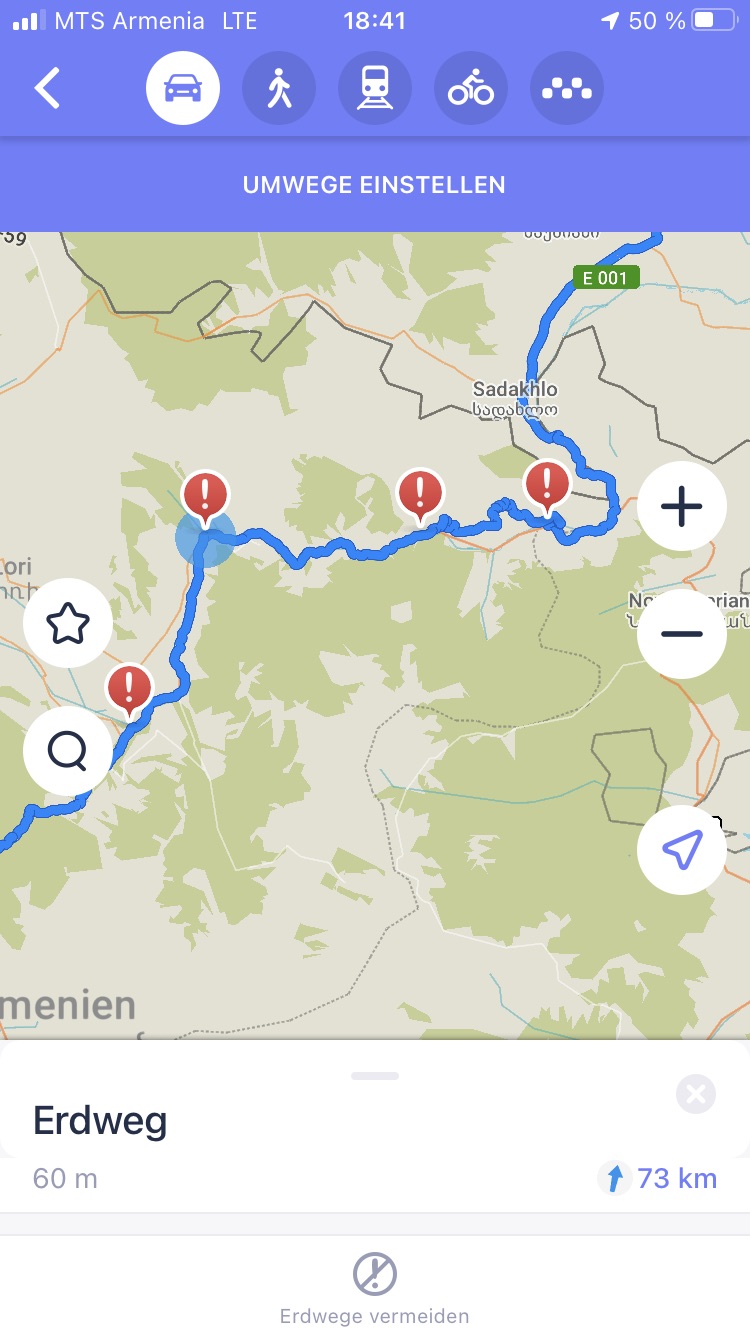 What is an Erdweg (earth way)?

Erdweg sounded very funny, but it simply meant that the road was without asphalt. That meant a lot of shaking in the car and also a lot of dirt on the car. The bus driver didn’t think that would work if you wanted to cross the border, so he went to a car wash and hosed down the bus. That was my last photo in Armenia: 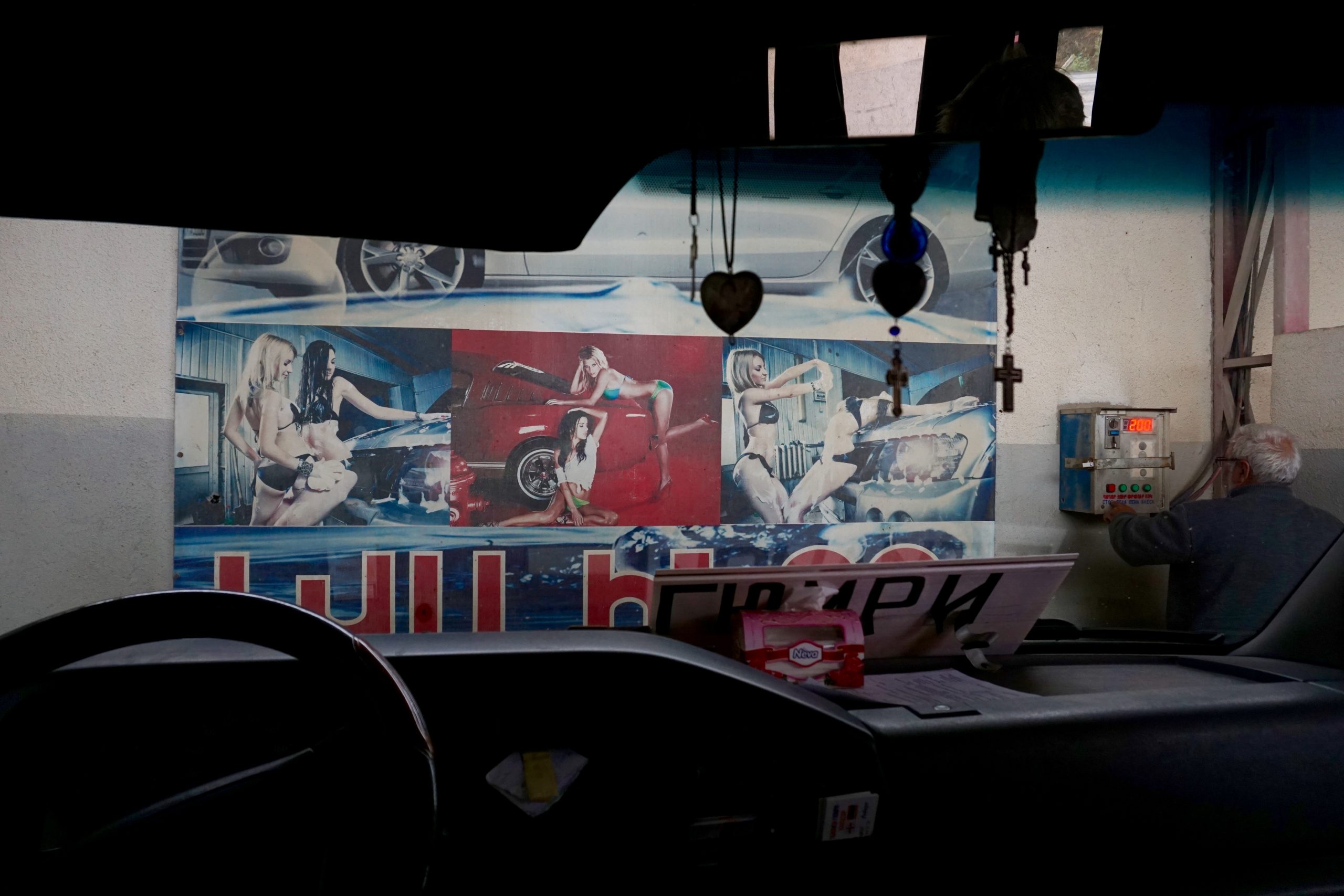 not beautiful decoration in the car wash

I didn’t take any pictures in Georgia, it was raining so much and I was sluggish. The road to Tbilisi was quite good. And there I noticed the difference even more than the other way round. The road was lined with shops, factories, pubs, etc. There were a lot of cars on the road. The absolute opposite of Armenia, where there are hardly any people and hardly any economy. And I could see – also in Tbilisi – much more Turkish. Company names, restaurants, products. I had a quick look at the relations between Armenia and Georgia and found the Wikipedia entry quite interesting: “Relations between the Republic of Armenia and Georgia are friendly but complicated. In short, Armenia is dependent on Georgia’s border for trade, as too much of their other borders are with Azerbaijan and Turkey. However, they do not like Georgia’s friendly relationship with Turkey and Azerbaijan. Georgia, on the other hand, does not like Armenia’s cozying up to Russia.

Tbilisi seemed relatively “easty” to me on my first visit. This time, with Armenia in the background, I found it to have a totally western, international feel. Unfortunately, it rained the next day and the weather was not good the day after neither. I wanted to take a bath in one of the hot baths, but you have to make a reservation because of Corona. But at No. 1 you had to have a working phone number (I didn’t – Armenia’s SIM doesn’t work here, mine charges too much), at No. 2 you had to book via Facebook and wait for confirmation of the appointment. But it didn’t come until 2 hours before the scheduled bath time – so I cancelled in a huff and went to one of the many Thai massages instead. It was actually very nice and relaxing. The next day I wanted to do a guided city tour – but that was cancelled because of babysitting. Then I wanted to go to a museum to see an exhibition on the Soviet occupation. Contrary to the information, the door was closed. Then I went to the Museum of Modern Art. And then it was already night and at 4:00 a.m. I took a taxi to the airport and arrived home in the afternoon. So that was it for the trip.

I want to write another blogpost with content about general travelling in Armenia. So stay tuned for more!