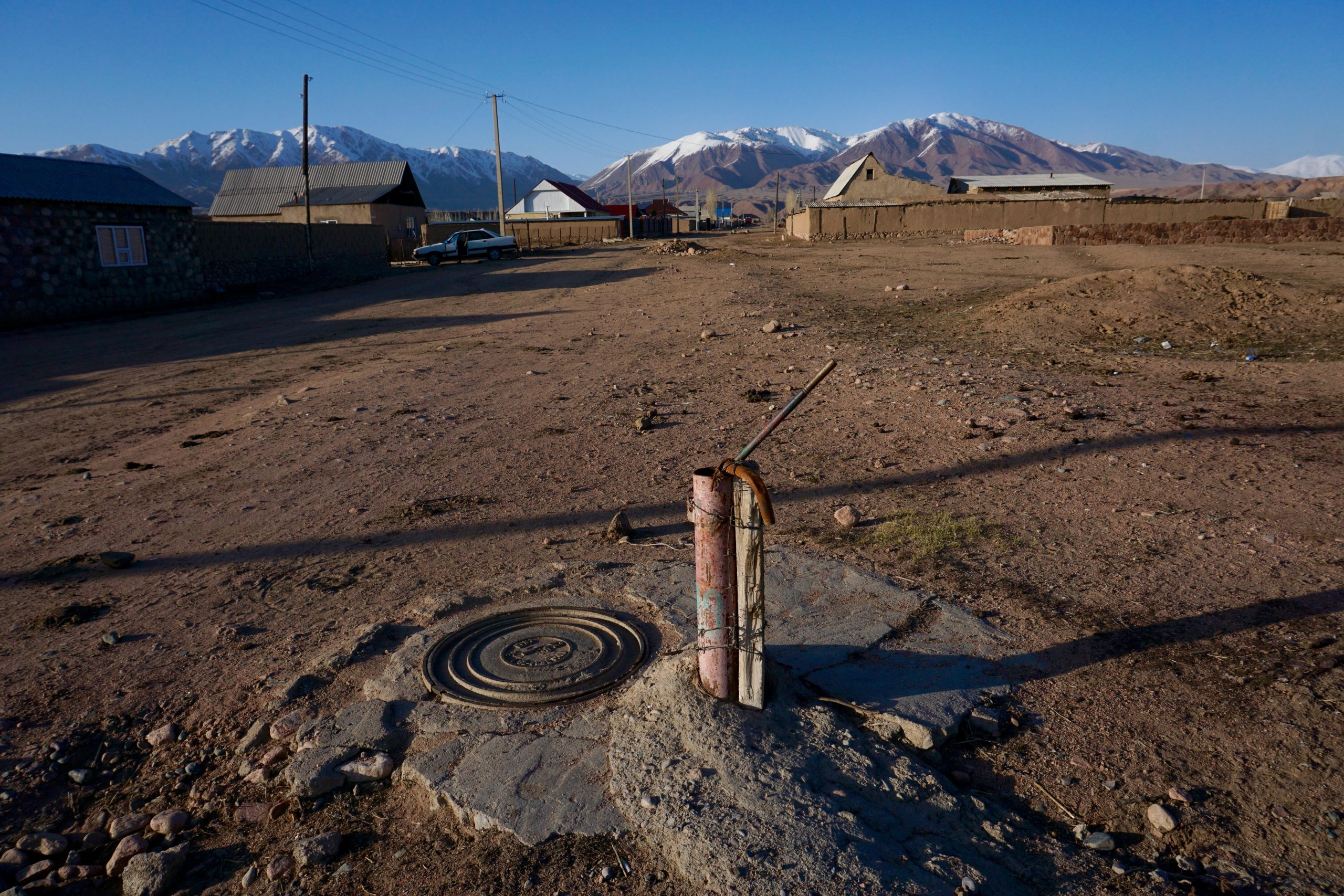 The next day we set off further west. We found a minibus where the driver was a bit confused about his seats and there was only room in the aisle. I squatted on a little stool and Rakhat stood partially. 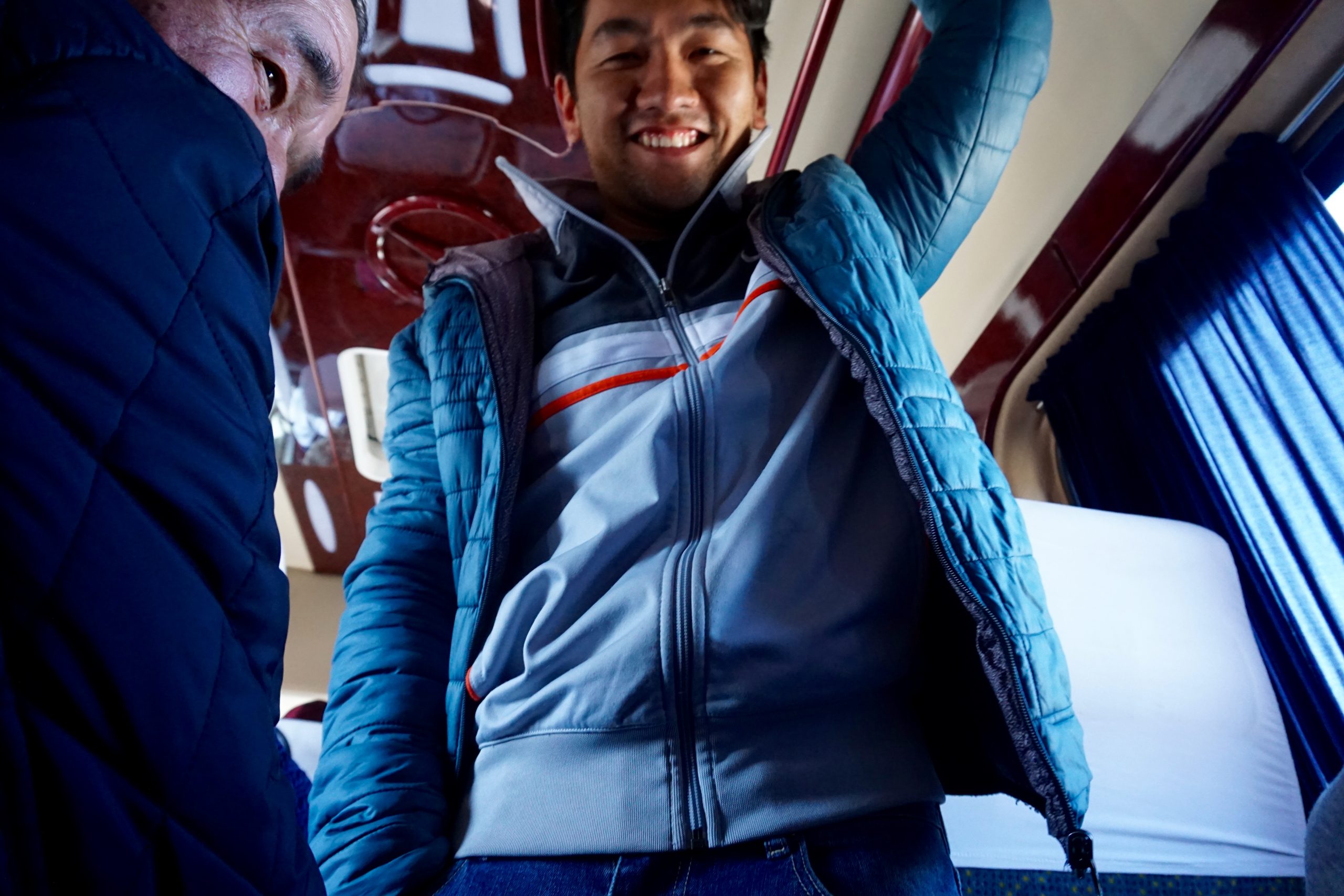 We crossed the Kyzart Pass, which was impassable a few days ago. But the sun was shining strongly and so there was no problem. However, I didn’t get to see much of it. Then people got off and I could sit in the 2nd row. 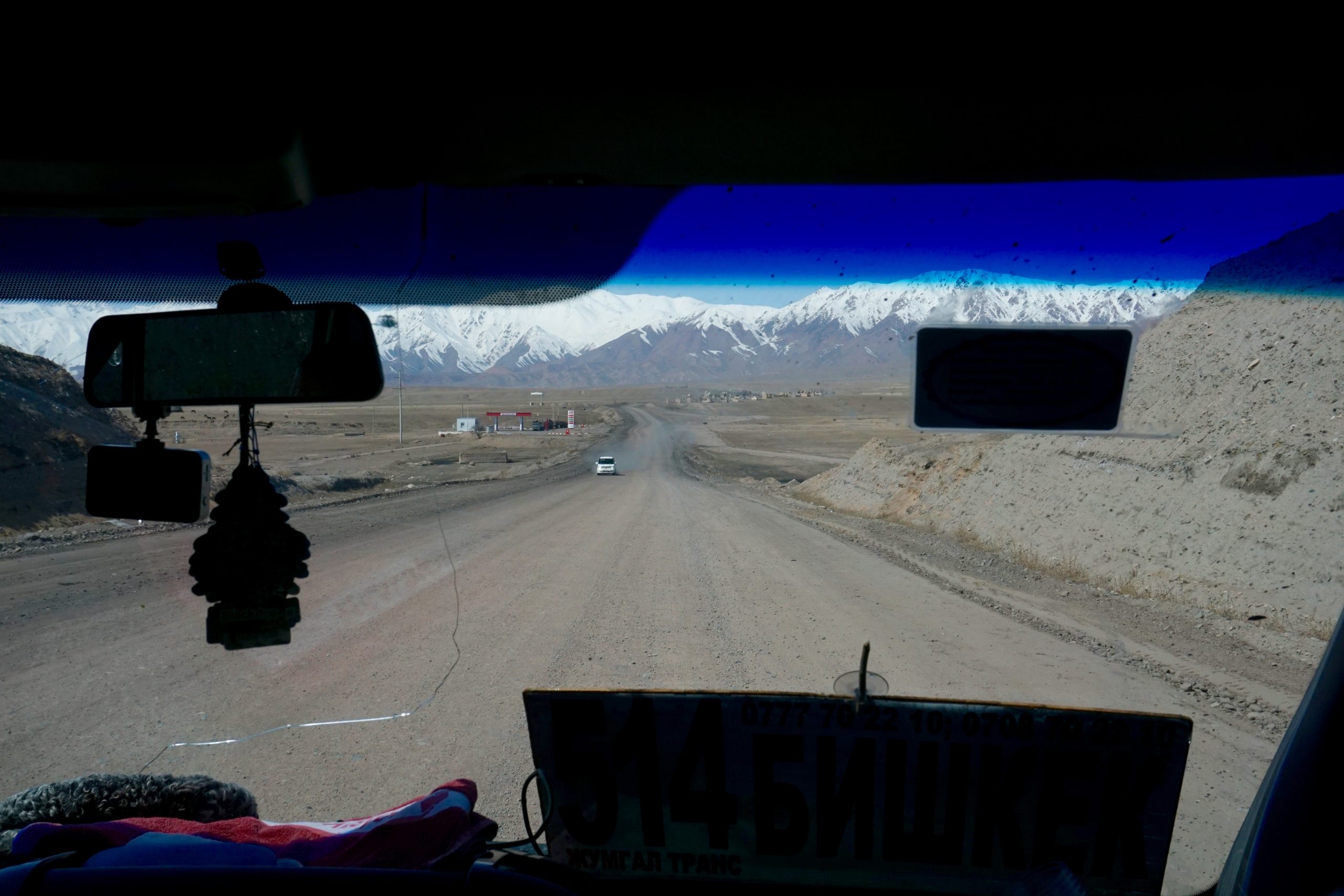 view from the 2nd row

The road was partly tared, partly not, and it took us about 2 hours to cover 105 km. To the left and right was vastness and behind it snow-covered mountain ranges. Super beautiful! 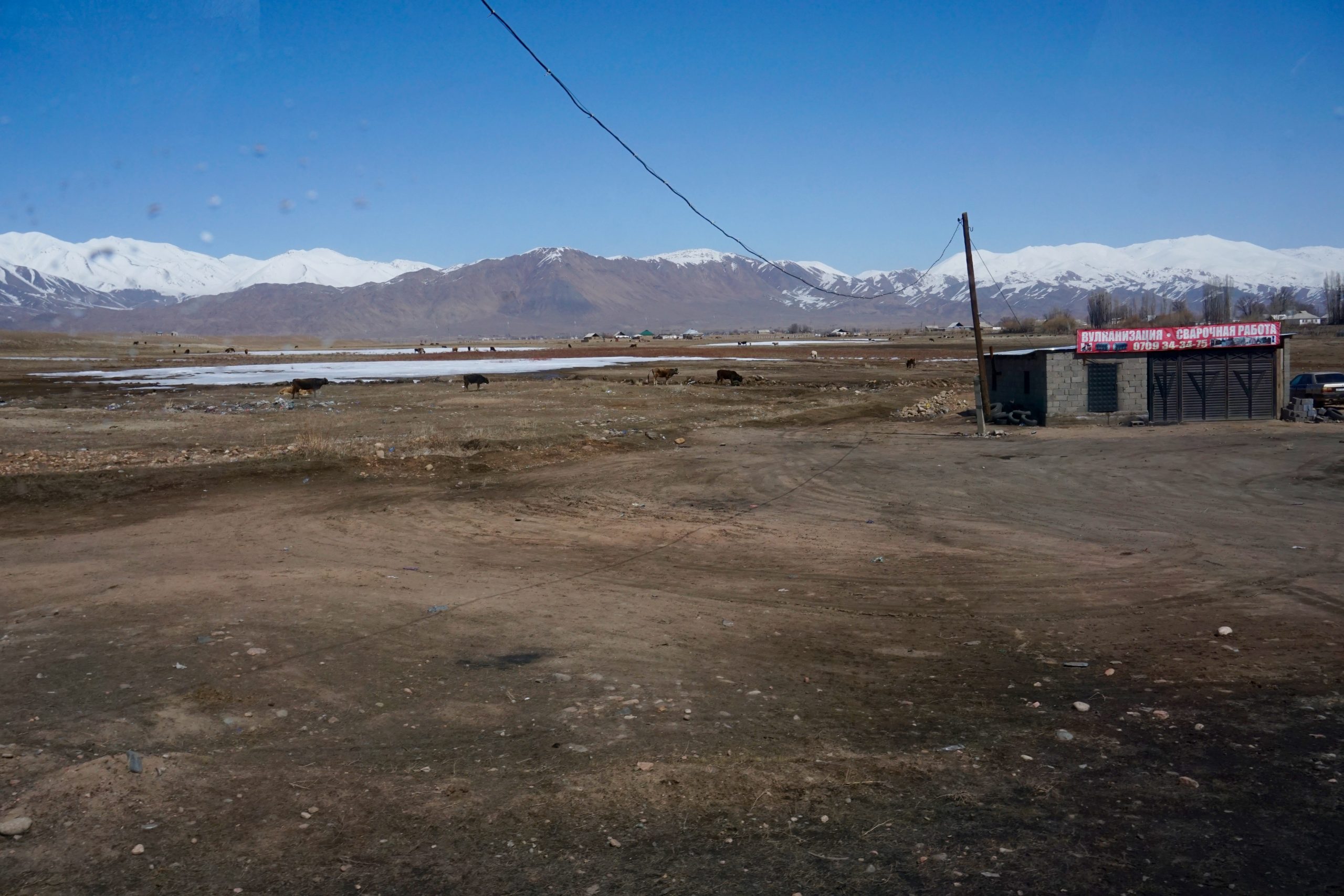 to the right from the road

Bash Kuugandy is a village of 3,200 people at 1,800 m altitude. There is black coal mining (the most common type of vehicles are trucks loaded with black coal) and most people have livestock (sheep, cows and chickens). An uncle lives here with his wife and a son, who is often on the road as a truckdriver. But we went out again straight away and headed for old ruins. 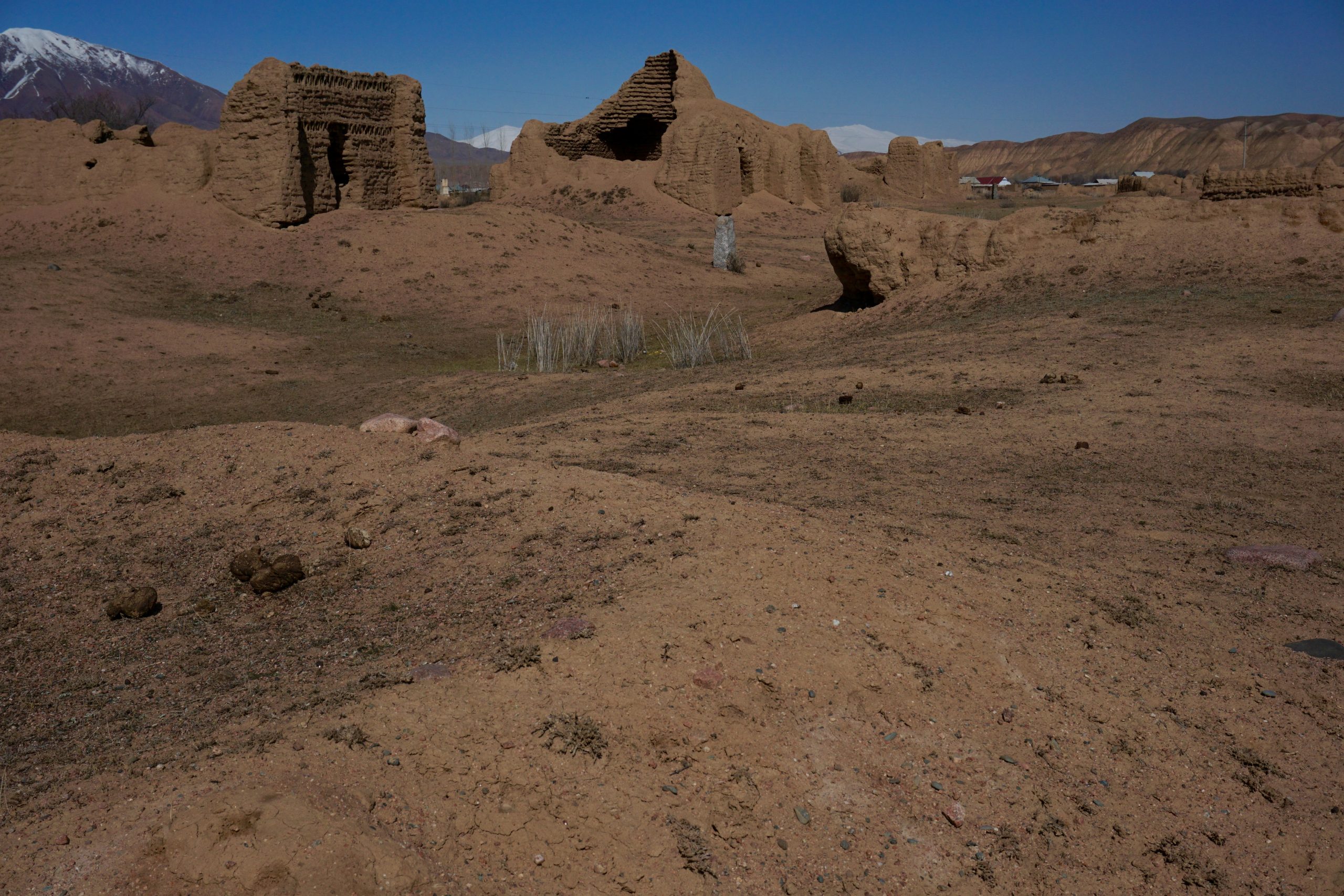 We didn’t find out exactly what it used to be and how long it had been there, but it was fun to walk around. 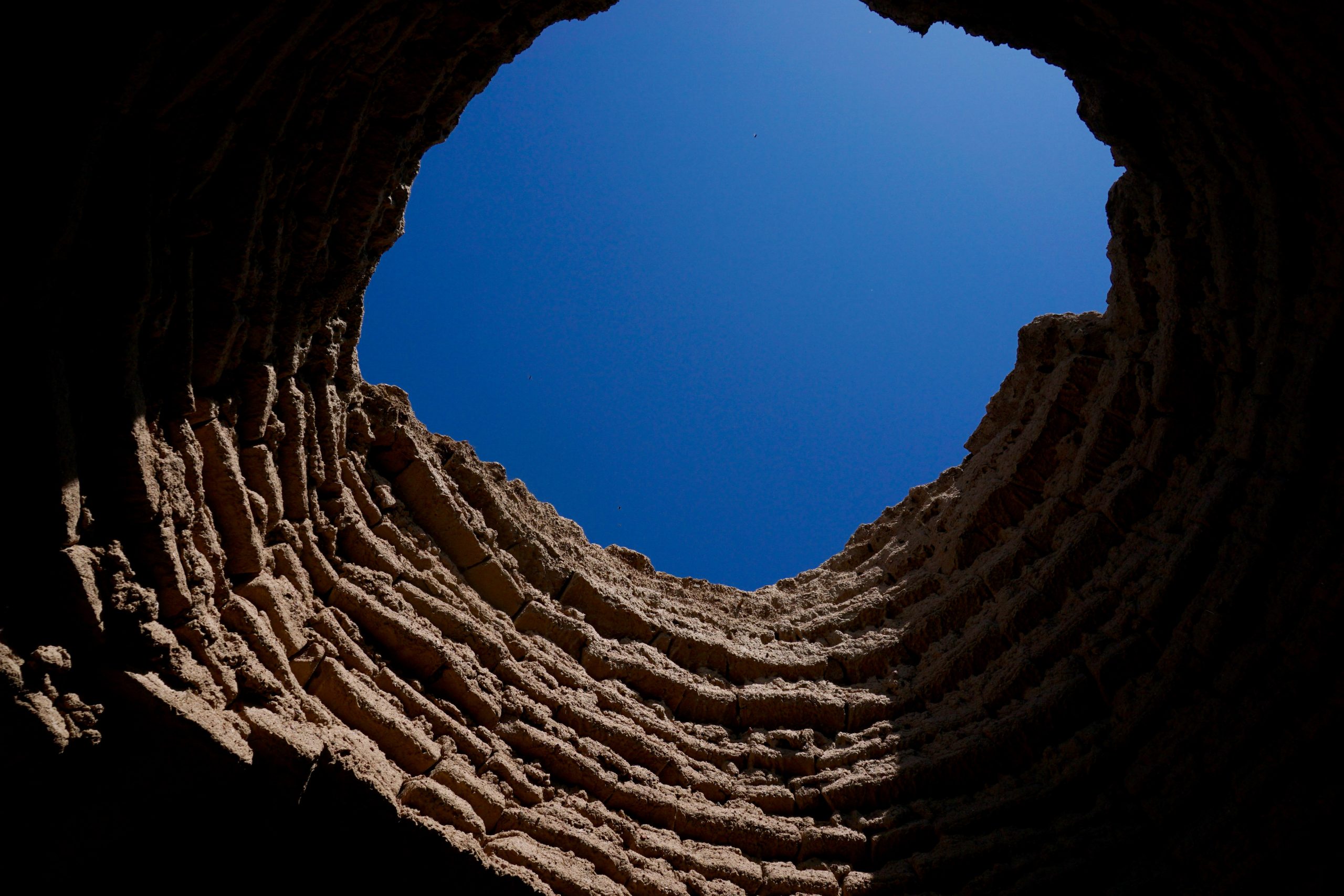 Next we met a shepherd with his small flock 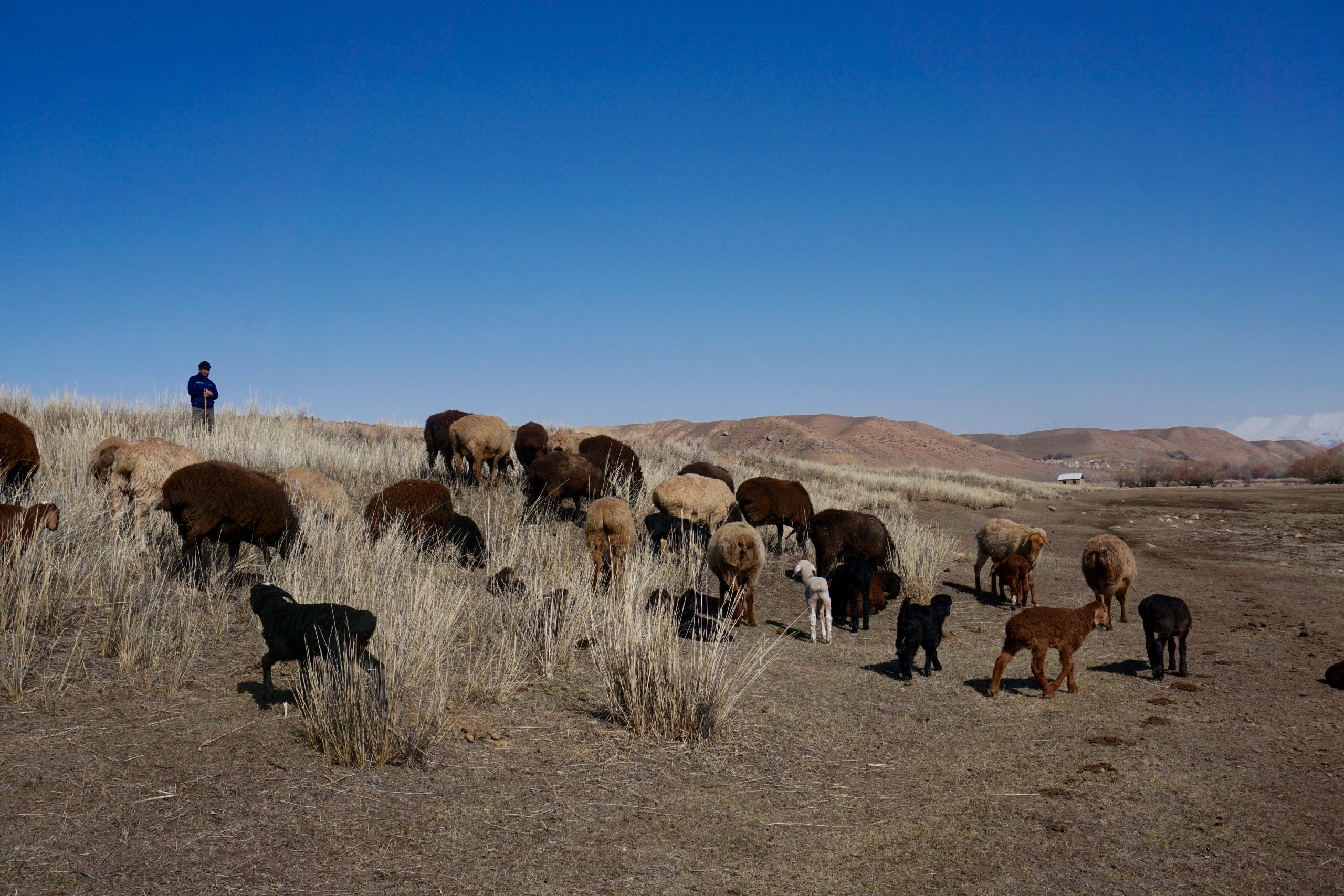 At the moment it is the time of the lambs. In his flock, some of the little ones had strange bands hanging down at the back: the male ones have their testicles tied off, which then fall off and they are castrated. 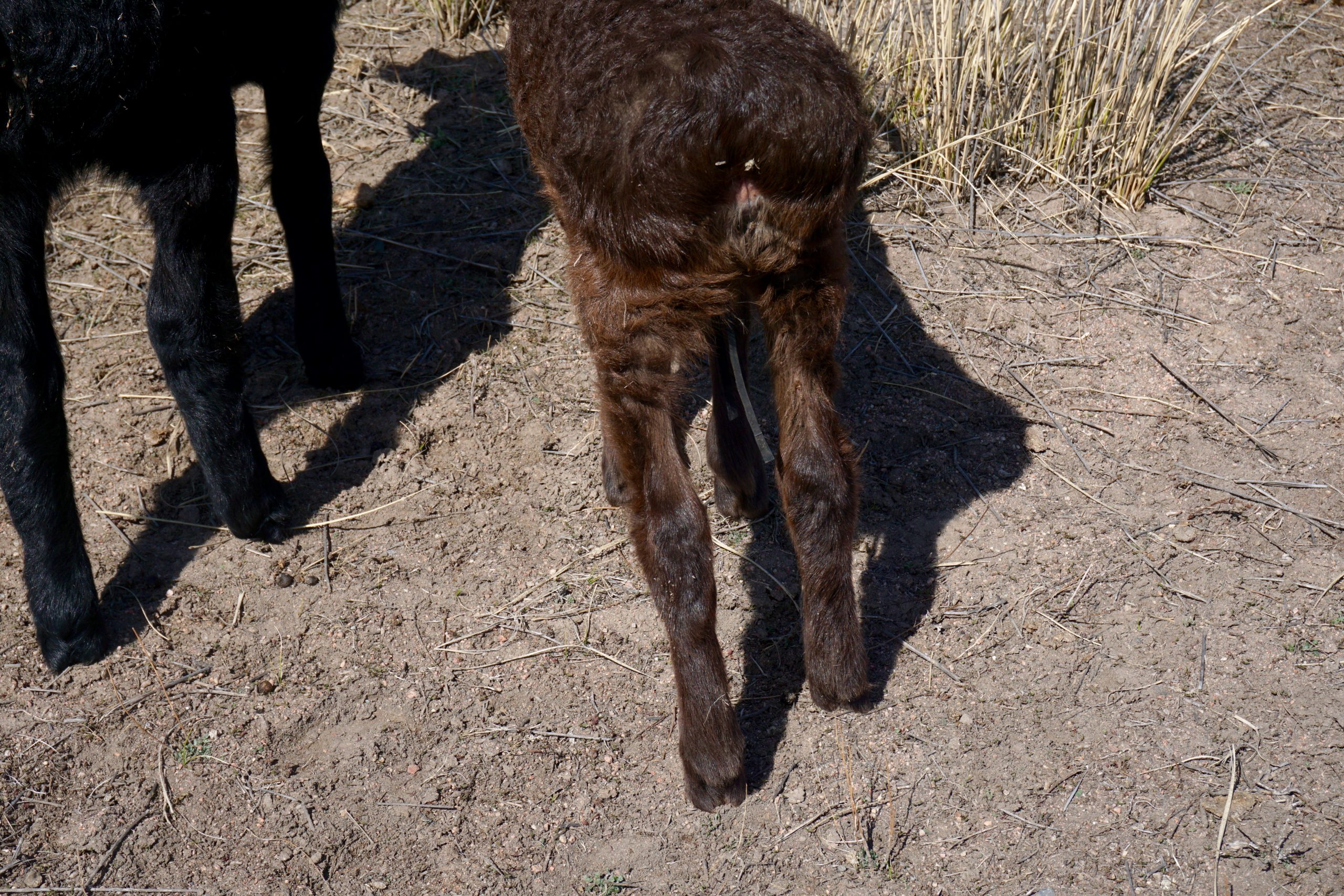 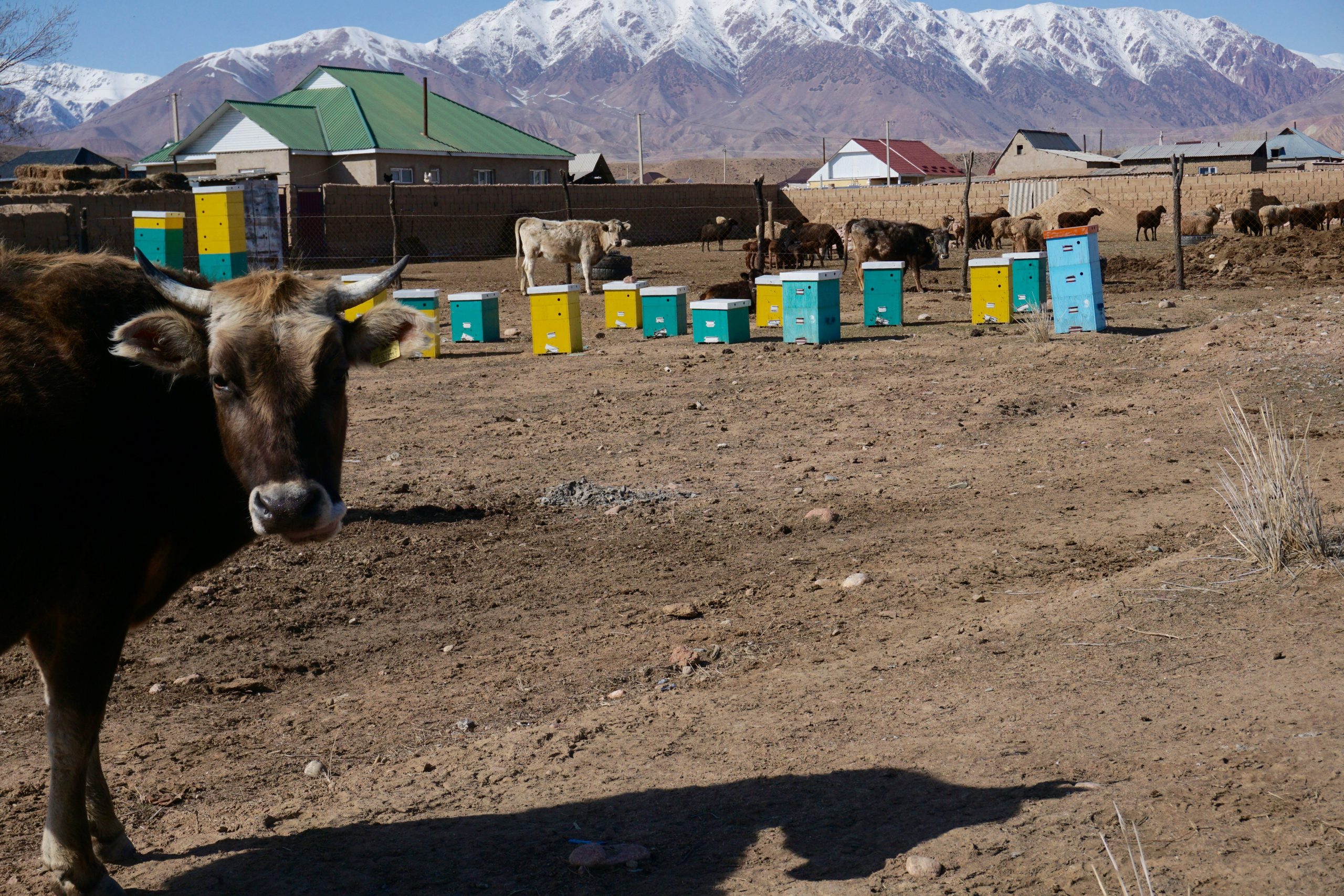 We visited another relative (but don’t know the degree of relationship), this was a man in his late 40s who lives alone. It is very unusual for someone to live alone here and he is not happy about it either. Many years ago he had an accident where one of his two children died. He himself was badly injured and it took them a long time to get him back into shape. After that, he often resorted to alcohol, had very aggressive fits and his wife found this unbearable and left him with the other child. Now he is sober and getting his life back on track, but he is unhappy about his loneliness and hopes for the return of his wife and child. We philosophised about life and happiness and being alone. For the vast majority of Kirgies, happiness lies in the family. And since I am not married and have no children, it is not easy for them to understand me. I guess I didn’t seem unhappy to them, just very strange. Why would I travel here at all, when there is nothing interesting? But they were surprised that I appreciated their everyday life and conversations so much, but in principle they liked it. The man was probably very happy that Rakhat and I came to visit him and that he could talk a little. 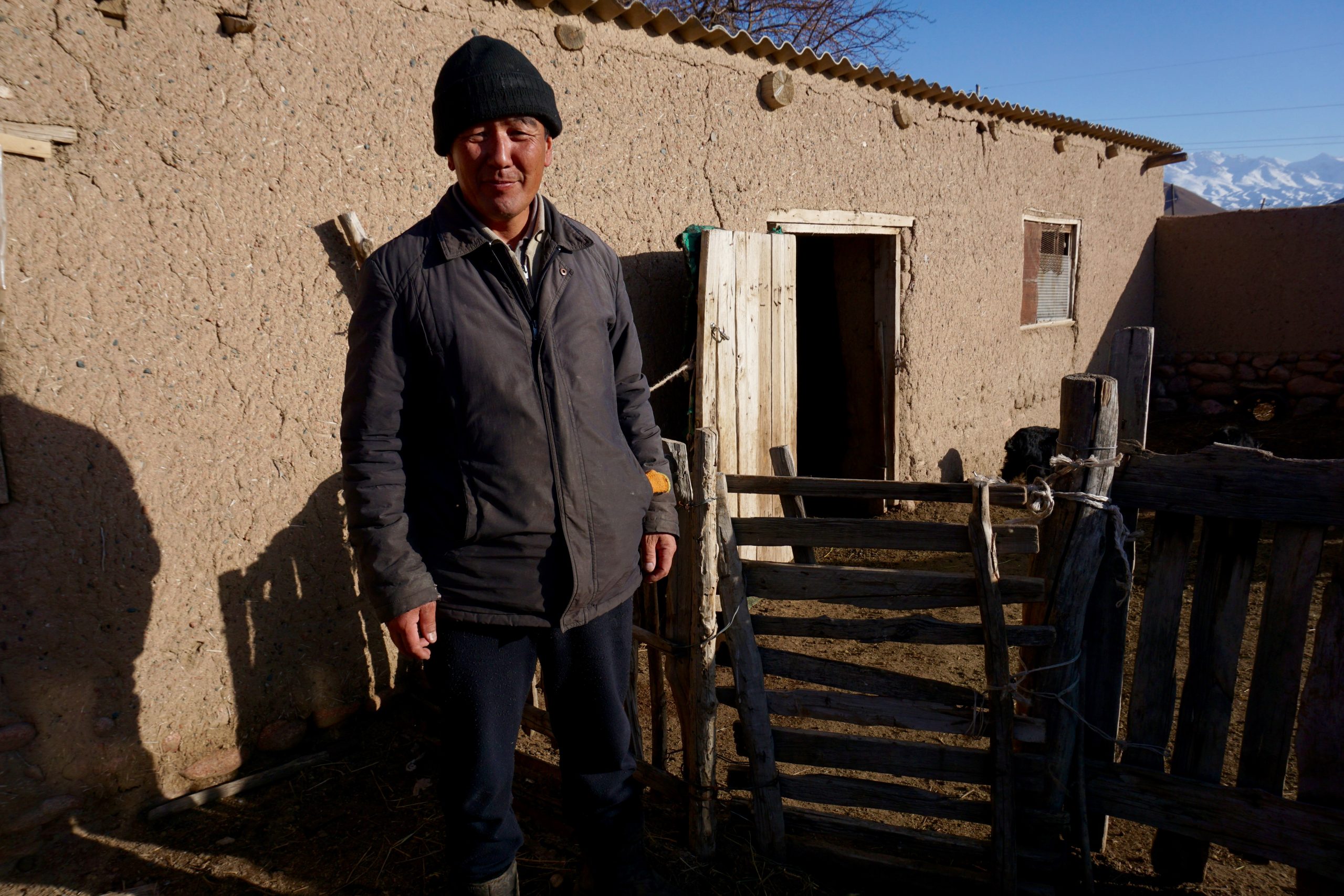 Then he had to look after his sheep and we went back to our hosts. There the wife prepared dinner. She made pasta herself, cooked potatoes and carrots and sheep parts and served it on a big platter around which we sat. 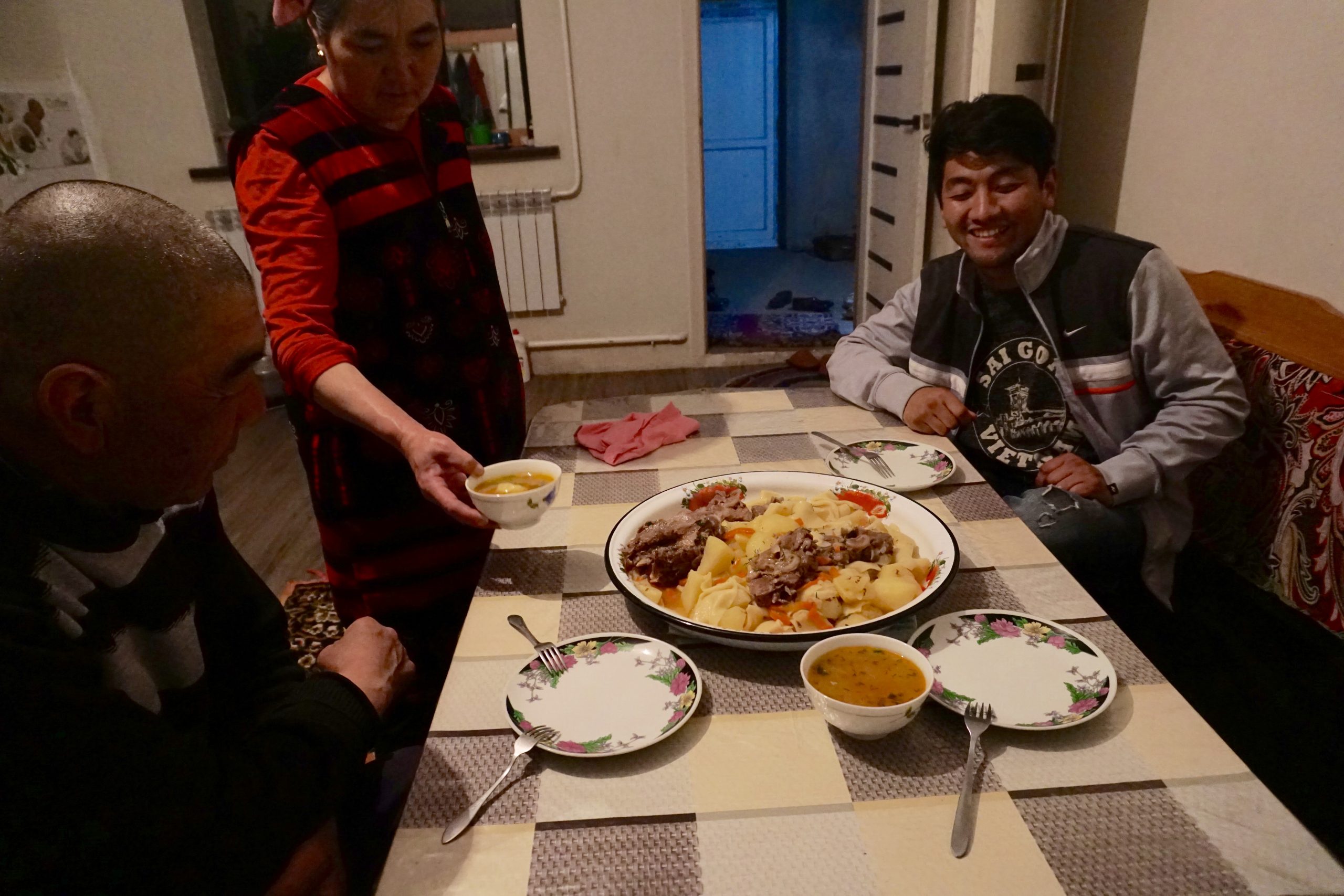 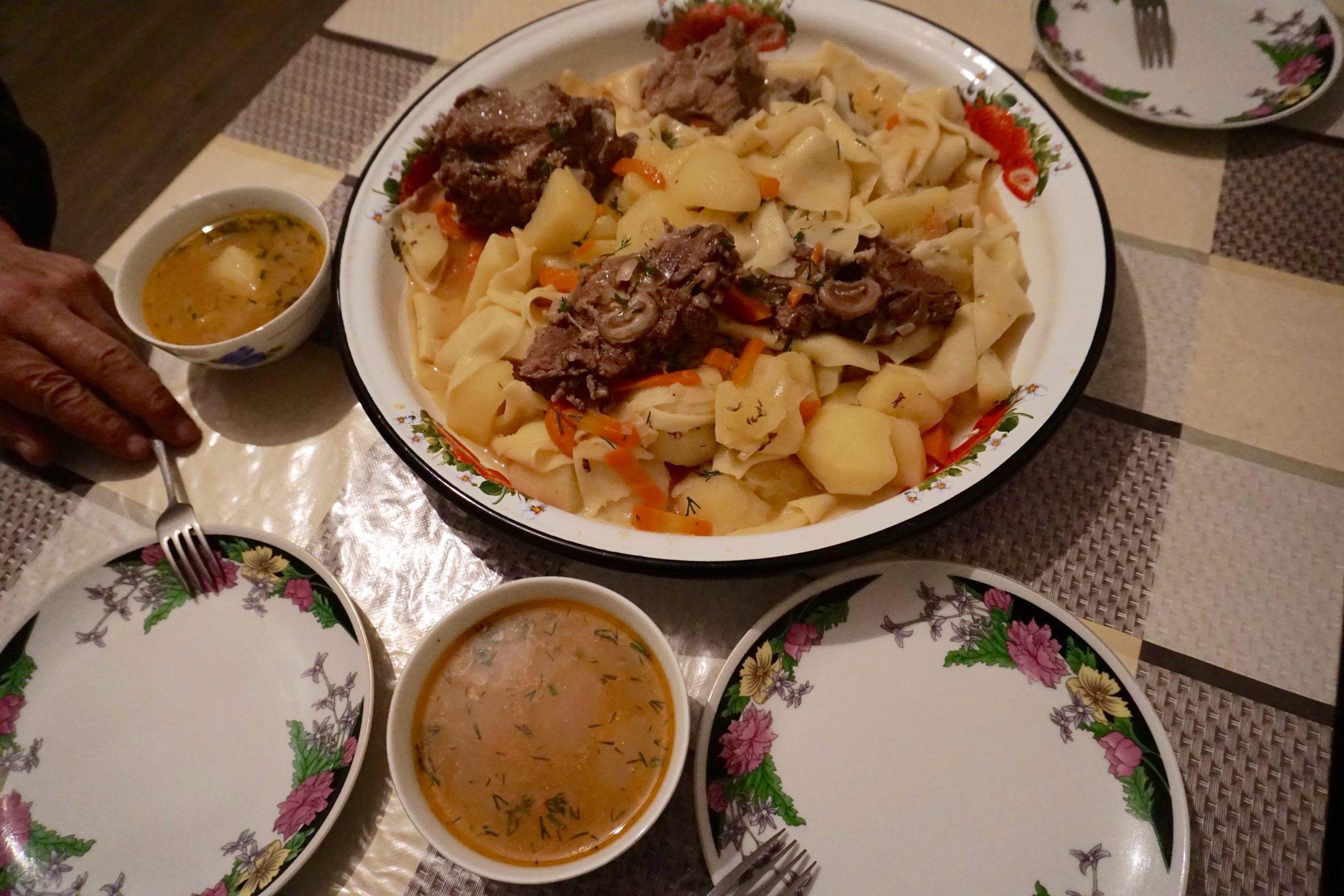 Here is the food in large. Those who know me will guess that this meat represents for me exactly what I was afraid of in Kyrgyzstan. I can’t bring myself to eat it. But luckily there were enough other things on the plate and I got around the meat. Some parts you clean and dry carefully and then you can play with them. 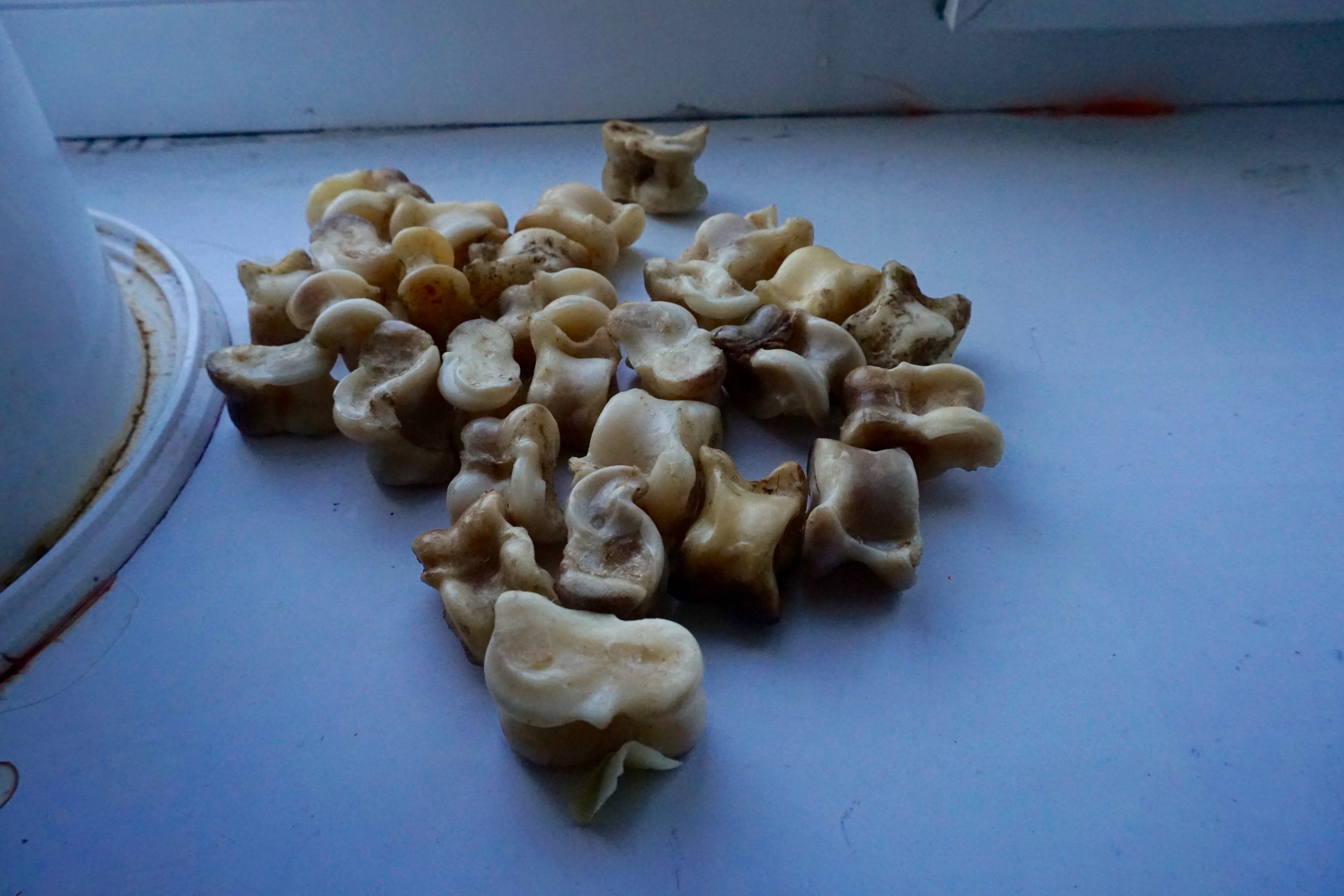 Incidentally, the couple met at the water vending machine. They were both students. At that time there were water machines where you could get drinking water for money. She didn’t have any, but she was thirsty and he helped her out. And that’s how the love started.

They have a small pipe where ice-cold water comes from the depths, but they fill it into a container with a tap for washing. No one has a toilet, so they always have to go to a squat toilet as far away from the house as possible. Here is such a small house (but not theirs). 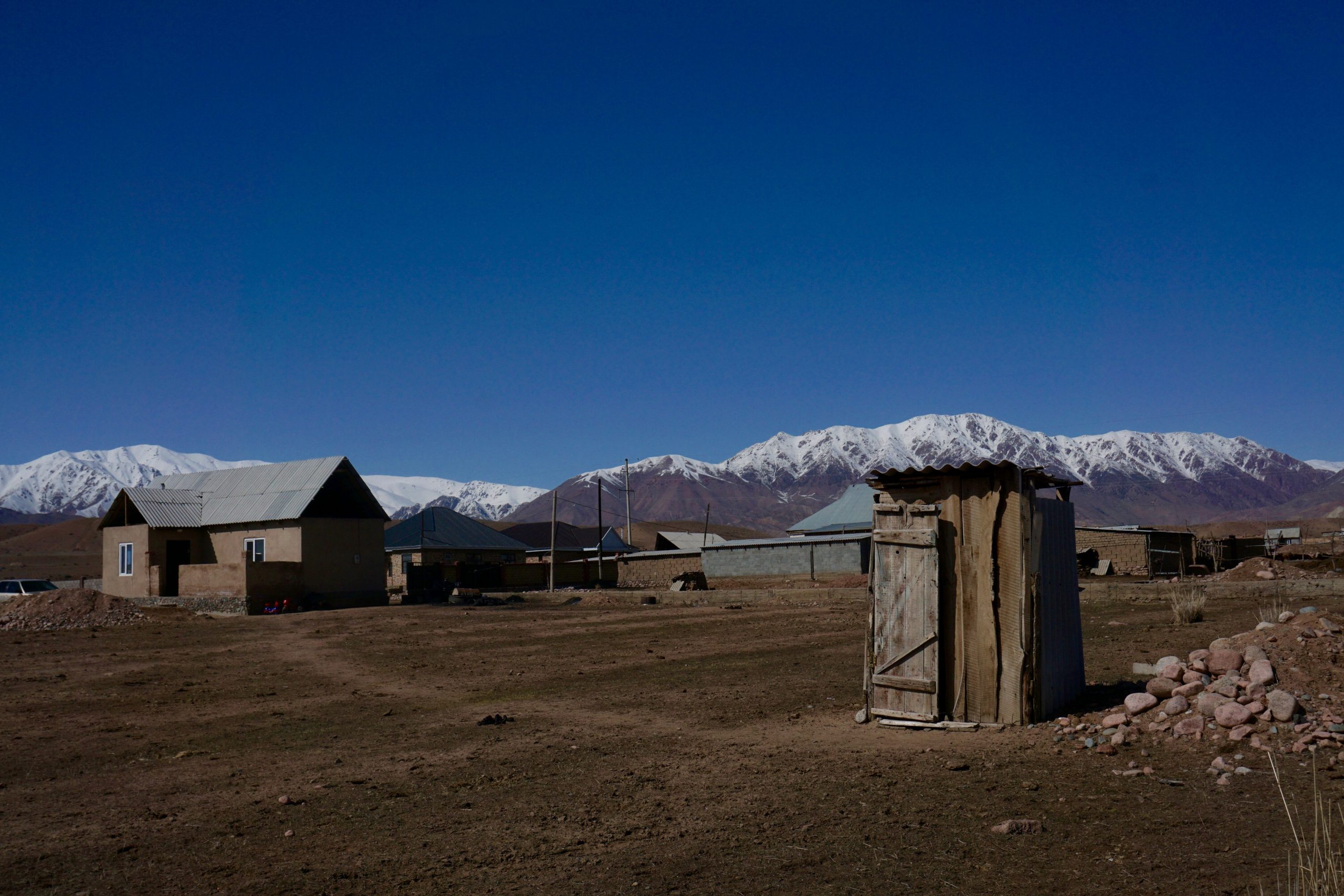 No joy for nightly toilet trips, but manageable. Then our beds were made up. There are quilts and blankets and duvet covers in each house and so it is easy to have visitors stay overnight. 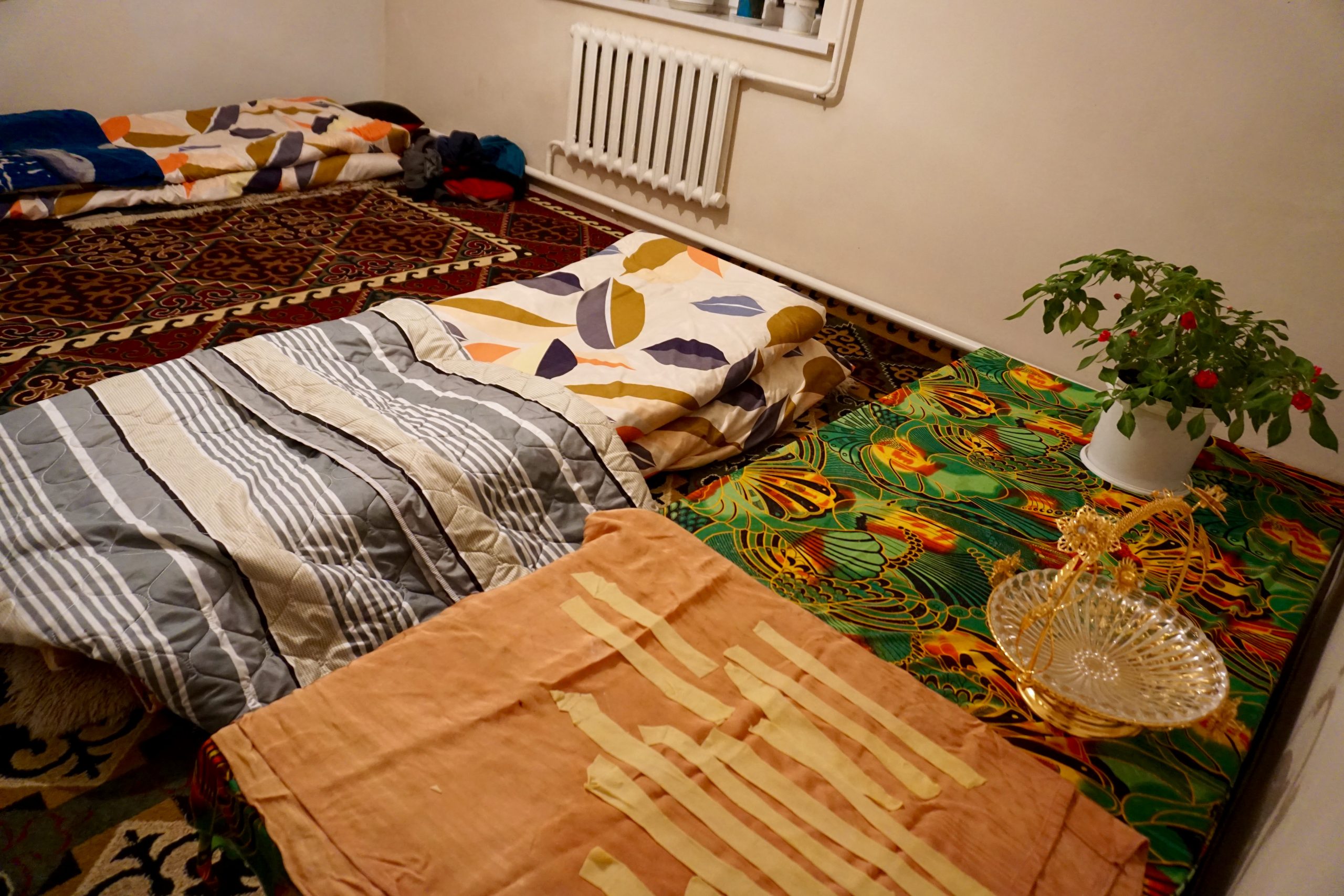 In the front of the picture, noodles are drying. And so another nice interesting day came to an end.