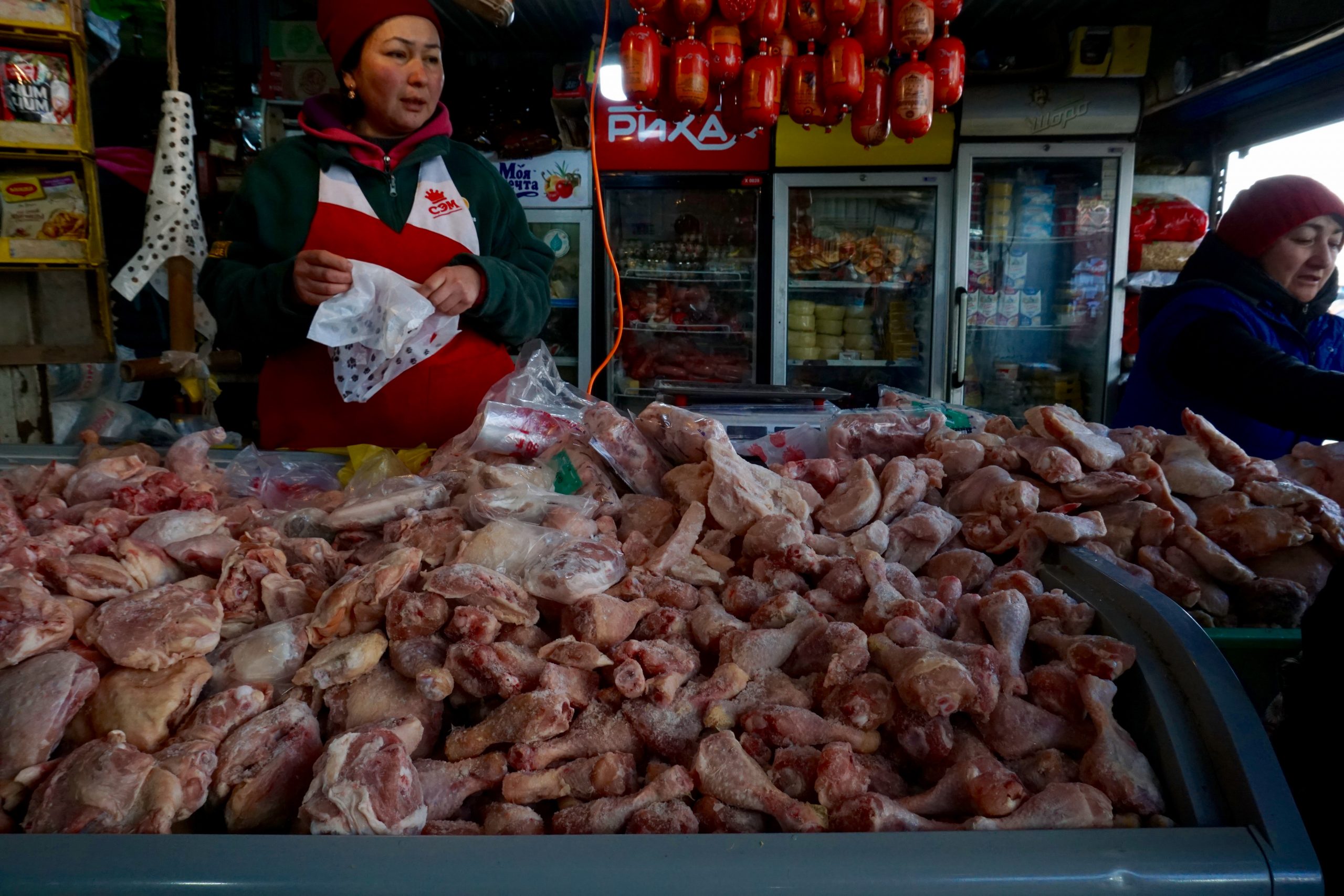 My first kyrgyz contactwas at Istanbul airport with two women who were also flying from Munich to Bishkek. One of them had previously gone to Miesbach as an au pair. She liked it so much that she went on to study in Munich and stayed there. She had to go to Kyrgyzstan for 2 weeks because her mother had died unexpectedly – at the age of 75. A bit too early. I told her she was the first person of Kyrgyz origin I would meet. She laughed: there are many – also in Germany. They were sitting far away from me on the plane and unfortunately I didn’t speak to them again.

Back to Bishkek. I woke up the next day and the sun was shining from the sky. I went on a city walk again – first to the iStore to take care of my picture problem. There were 2 very nice saleswomen working there, whom I unfortunately did not photograph. But on the way there I was able to catch a few more colourful pictures. 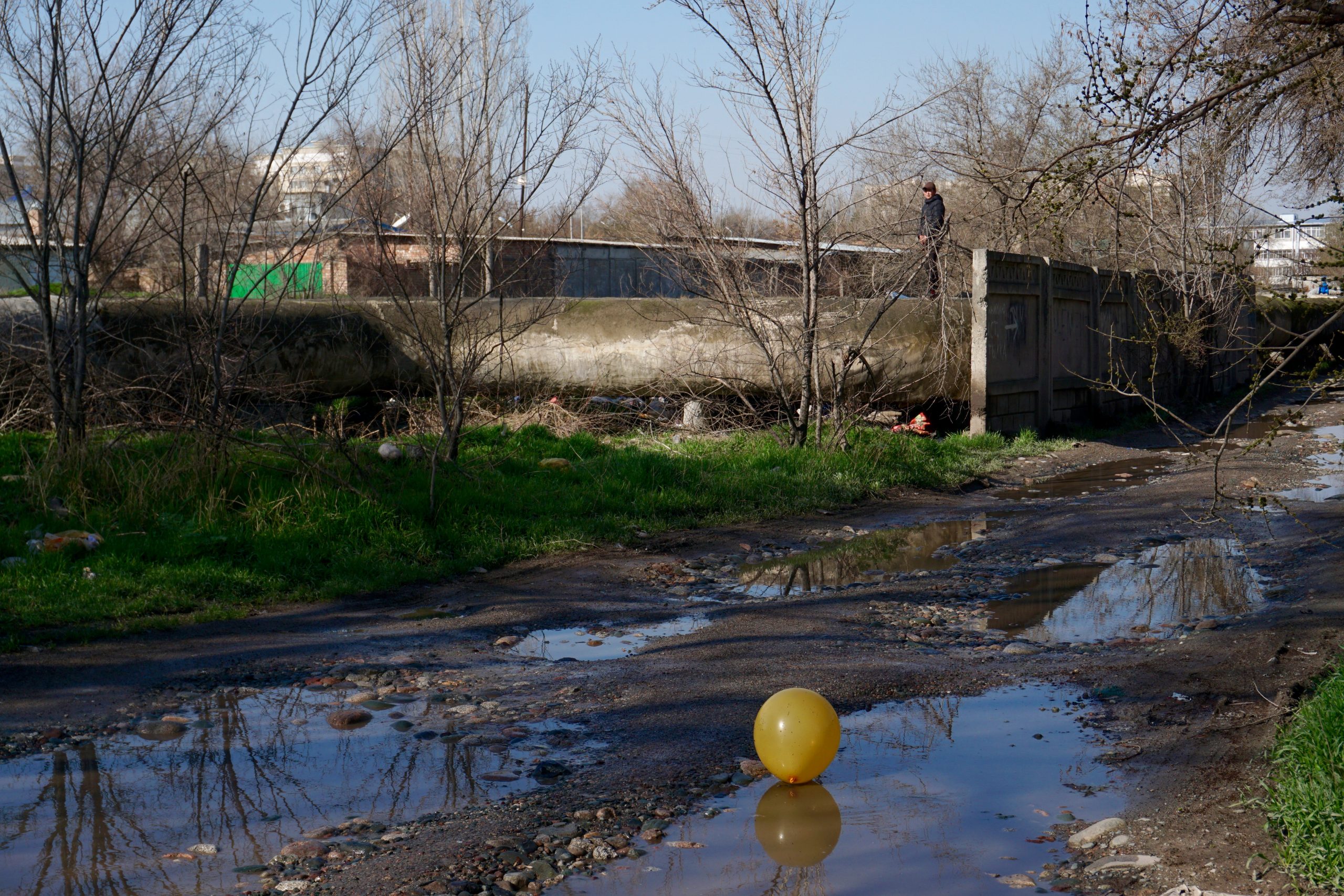 The shrubs are slowly budding tenderly 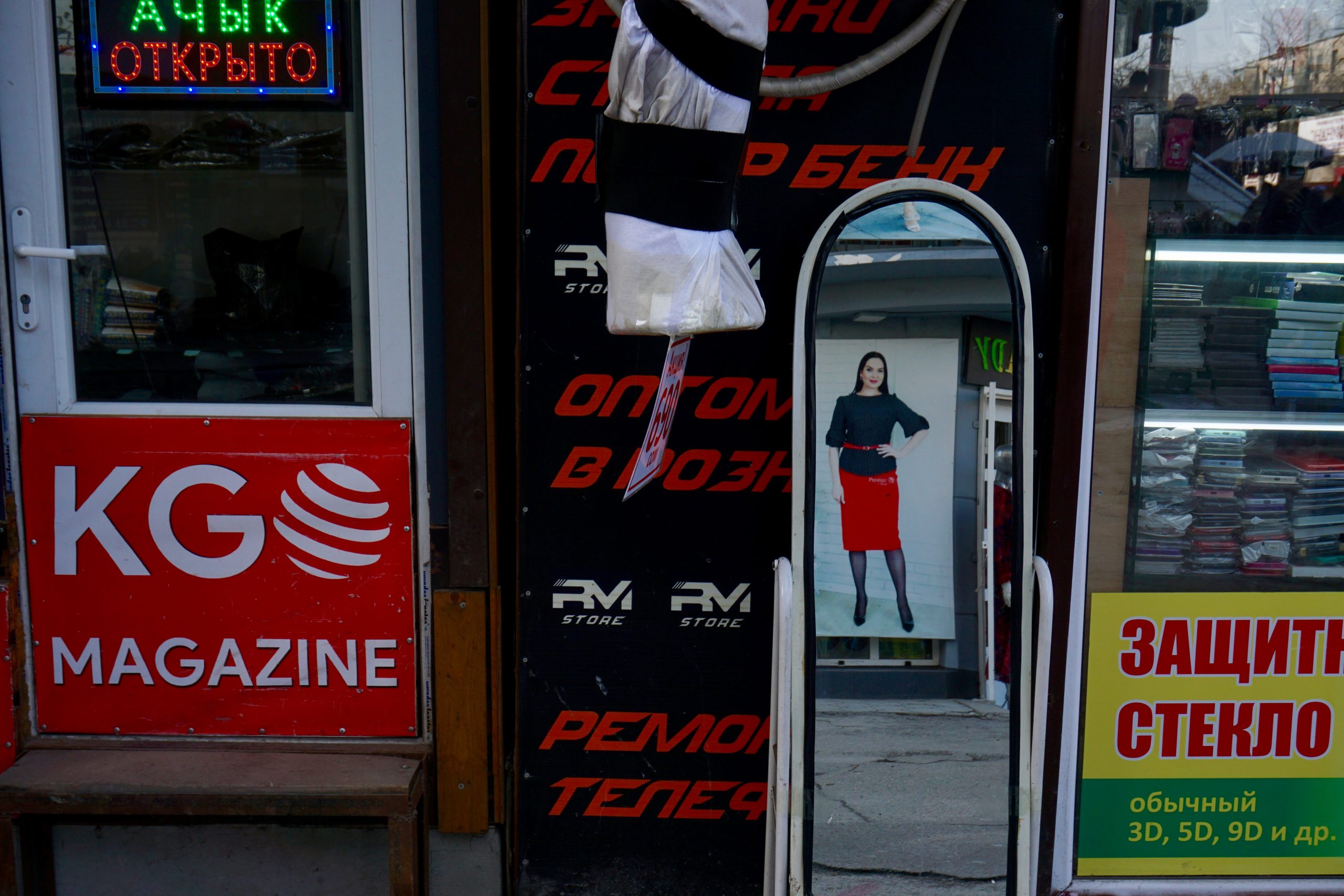 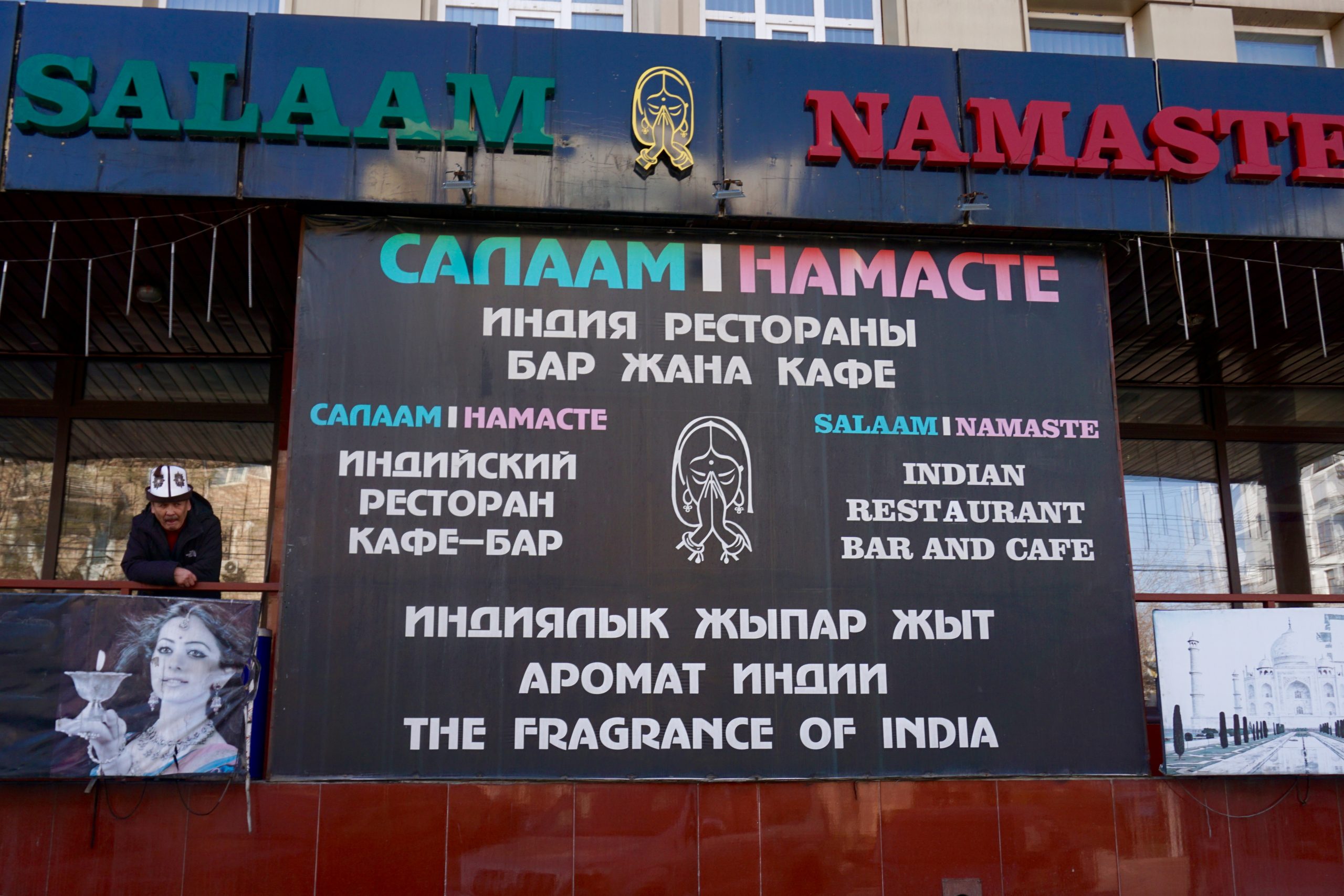 a bit of India

The next destination was the Osh market, which had been recommended personally and elsewhere. But it turned out to be different from what I had imagined. I imagined endless stalls in halls and outside – but it was rather manageable and very much empty and without a hall. 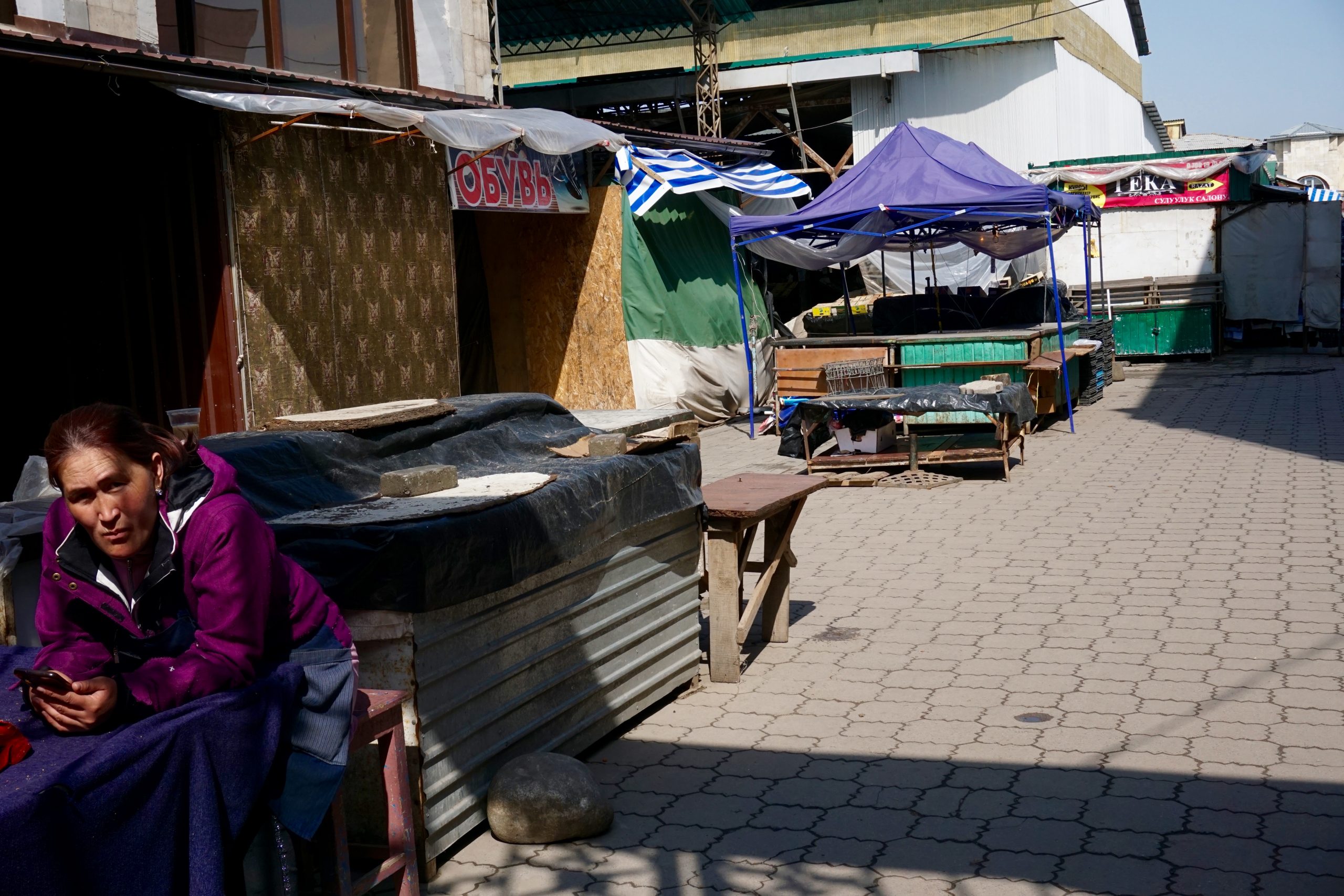 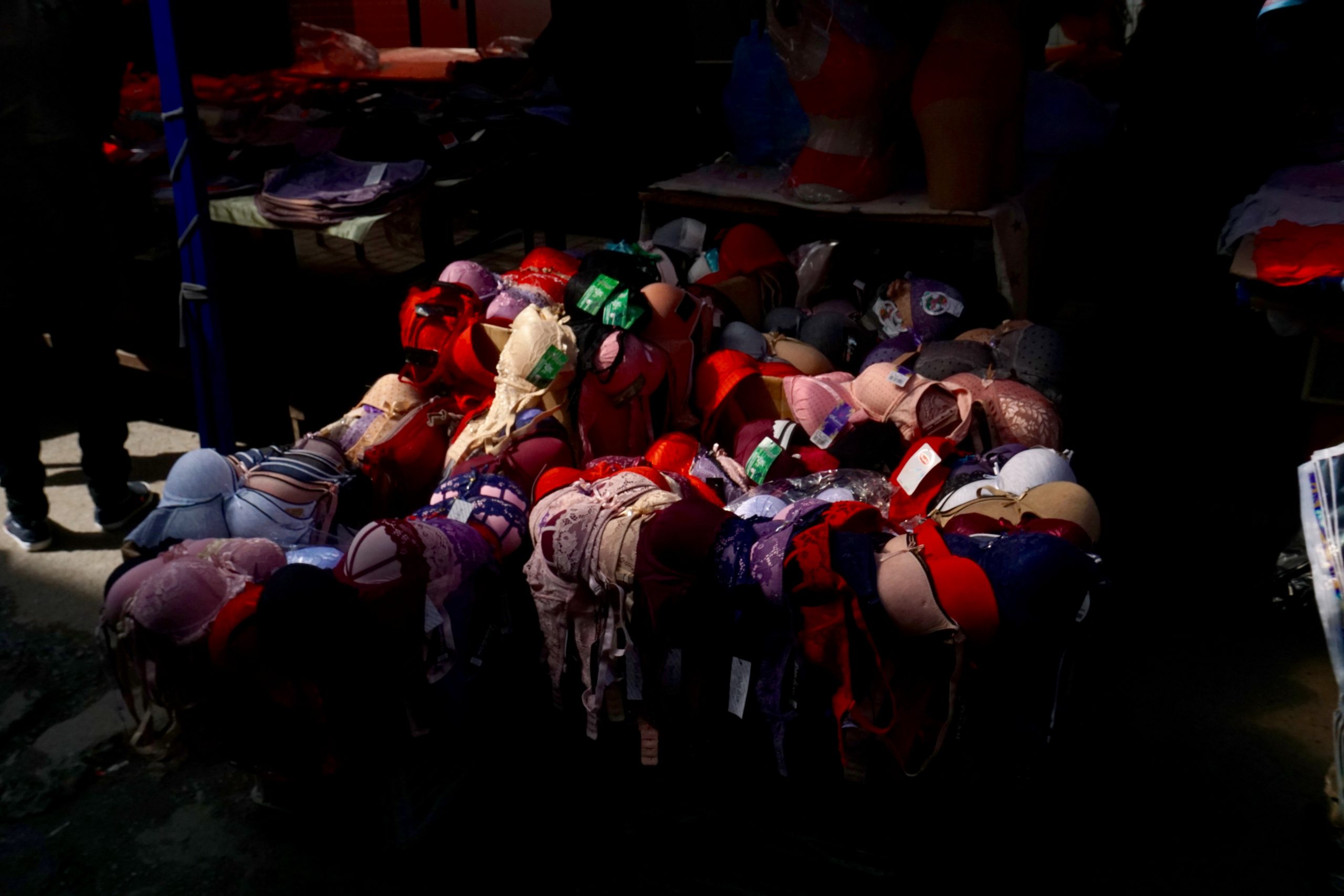 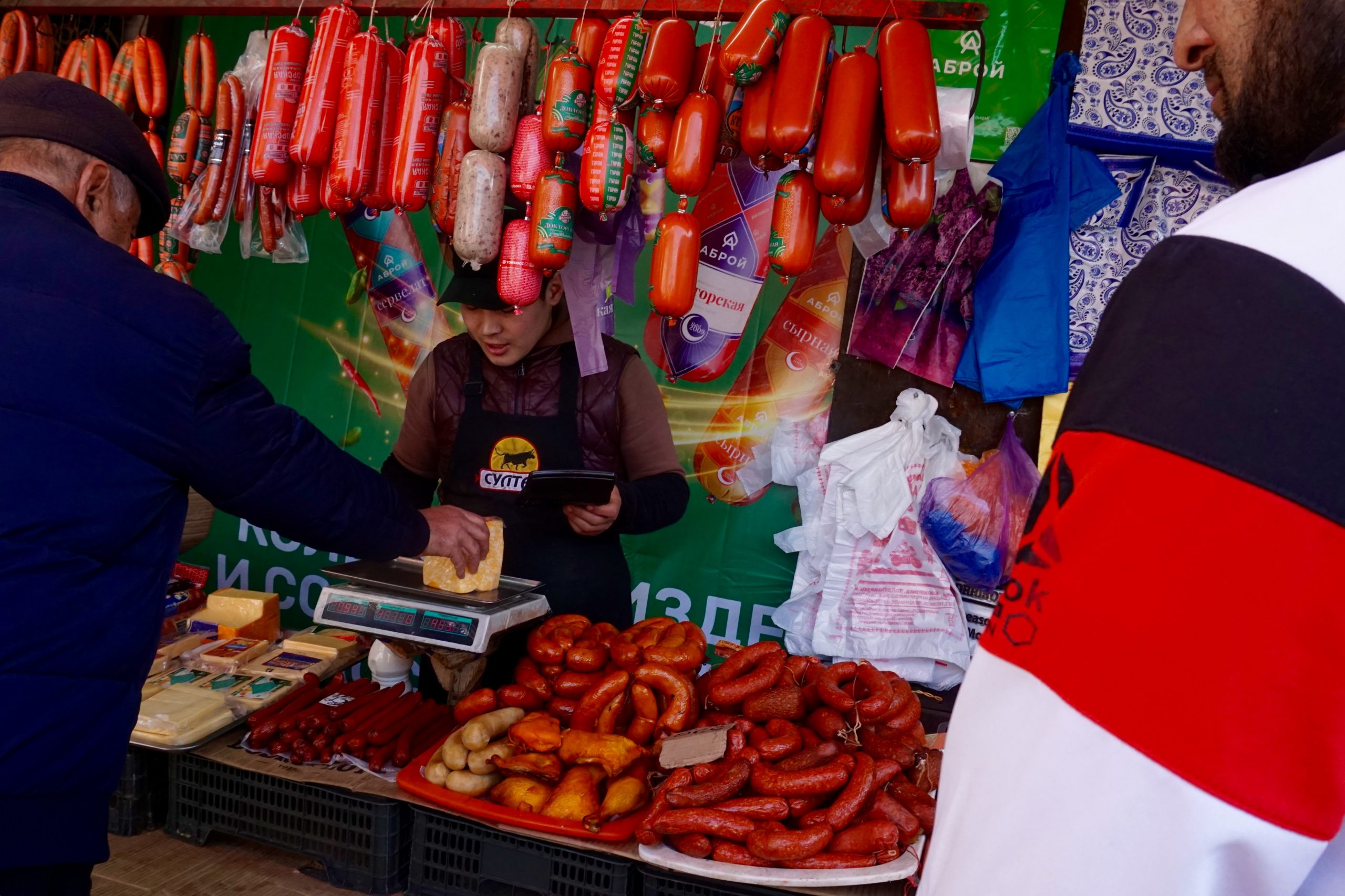 Kirghies eat a lot of meat. Preferably in the morning, at noon and in the evening. And as one Kirgie said: everything organic! But there are also fruits – although oranges and bananas are imported. Besides the fixed stalls, there are also wooden carts or goods arranged on the floor. 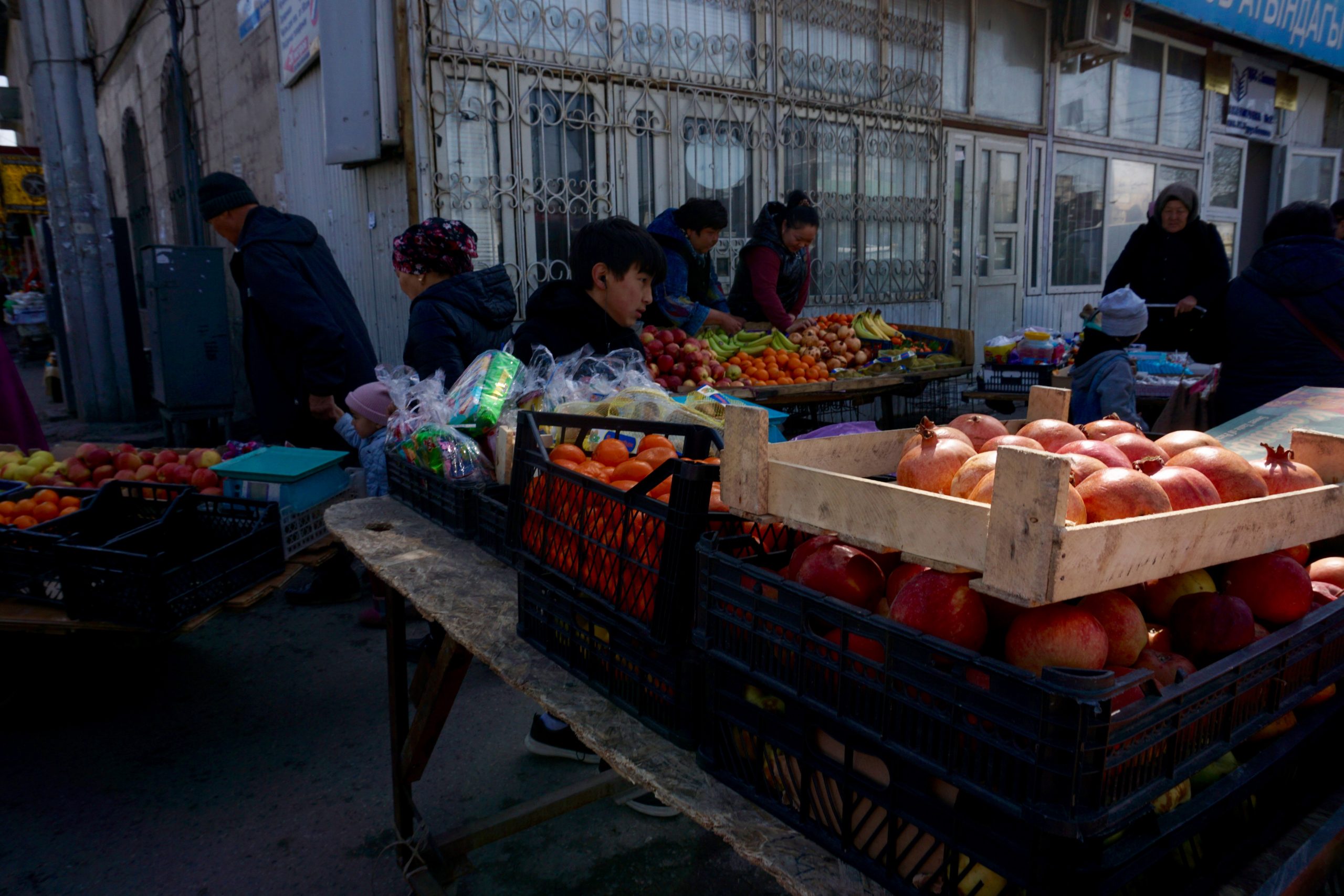 There are really a lot of women in the street scene. I like that. 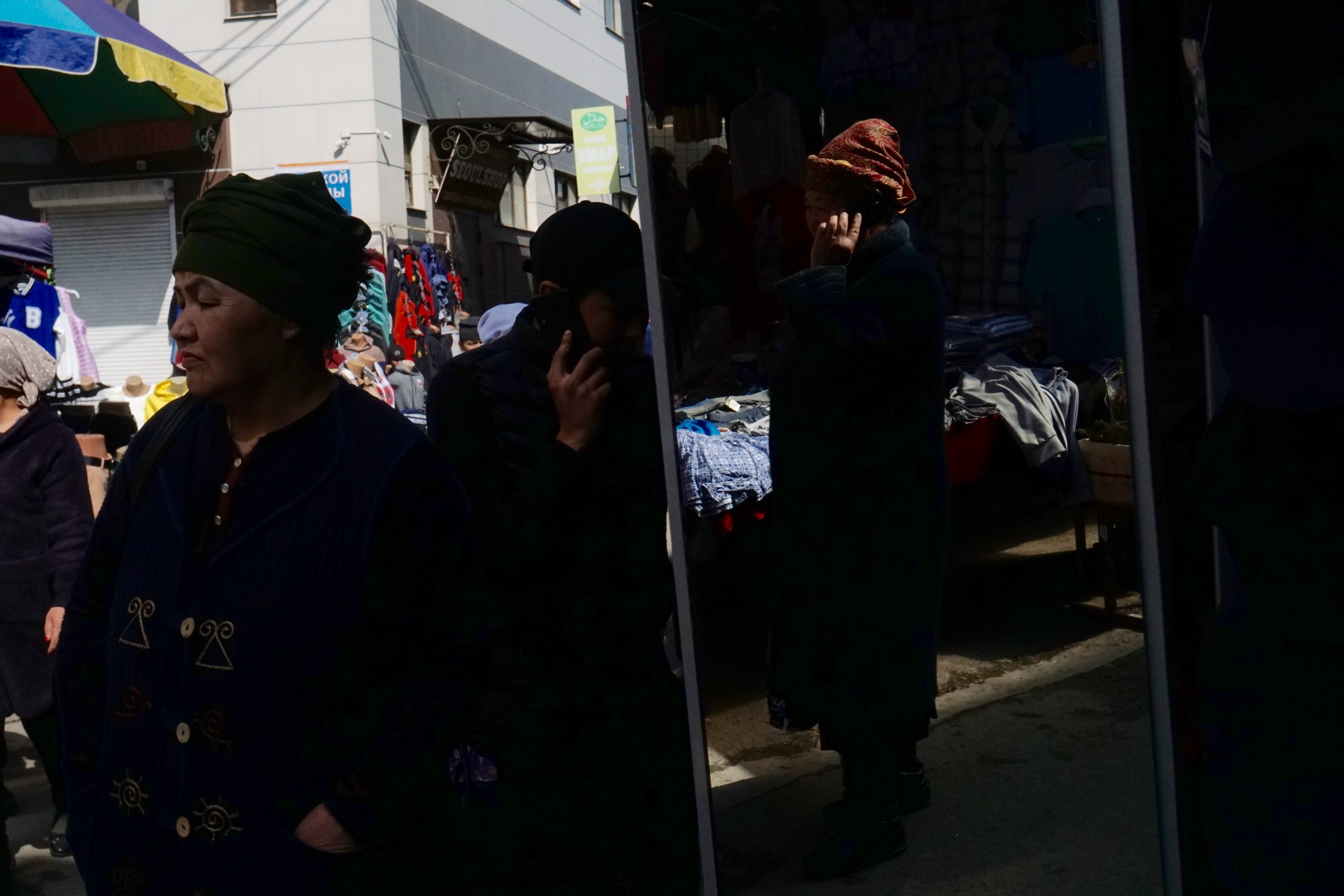 And after that I had a date with a Kirghiz woman under the red flag. And it happened like this: through a report about Ukrainian refugees I got to know the Facebook group “host a sister”. They were very committed to connecting refugee women and potential hosts. But it’s also a very big group for travellers anyway, who help each other, give accommodation or meet each other. I posted that I was travelling to Kyrgyzstan and would be happy to meet women there. The reactions overwhelmed me. More than 600 women liked my post, many made nice comments (also I belong to the rare species of “older sisters” – they are really mostly young women) and 2 offered to meet.

So I met one, Jarmilia, under the red flag. We walked around, she showed me some things (she is a culture enthusiast) and told me about her life. She studied history, but changed to yoga teaching, is 52 years old, divorced and extremely fond of travelling and has lived in other countries several times. It seemed like a stroke of luck to find her in Bishkek at all. 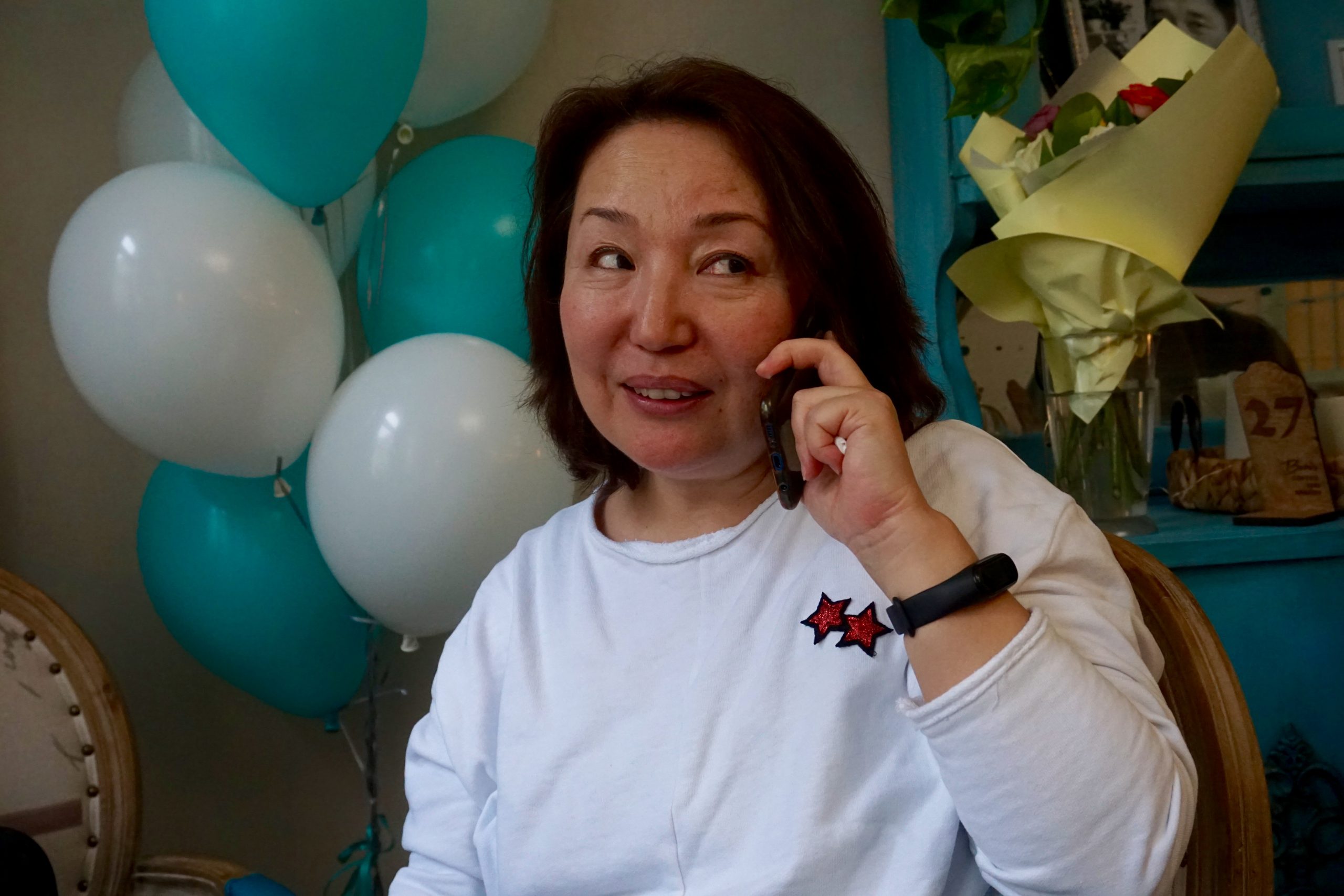 As mentioned above, I was not really aware of Kirgies, even in public life. There was only one – who I assumed was Russian. How embarrassing – far from it. At the end of the 90s, someone once recommended the book “Dschamlia” by Tschengis Aitmatov to me – as one of the most beautiful books with a wonderful love story. I read it, liked it – and forgot the content again. I definitely have to read it again. Because Aitmatov is Kirghiz and Jarmilia is also called like the title giving lady and there is a lot about Kyrgyzstan in it.

Aitmatov was probably a very popular guy with women, who could ensnare them with beautiful words and also led an otherwise influential and attractive life. He was married – but also had loves. His one great love was supposed to have been this lady: 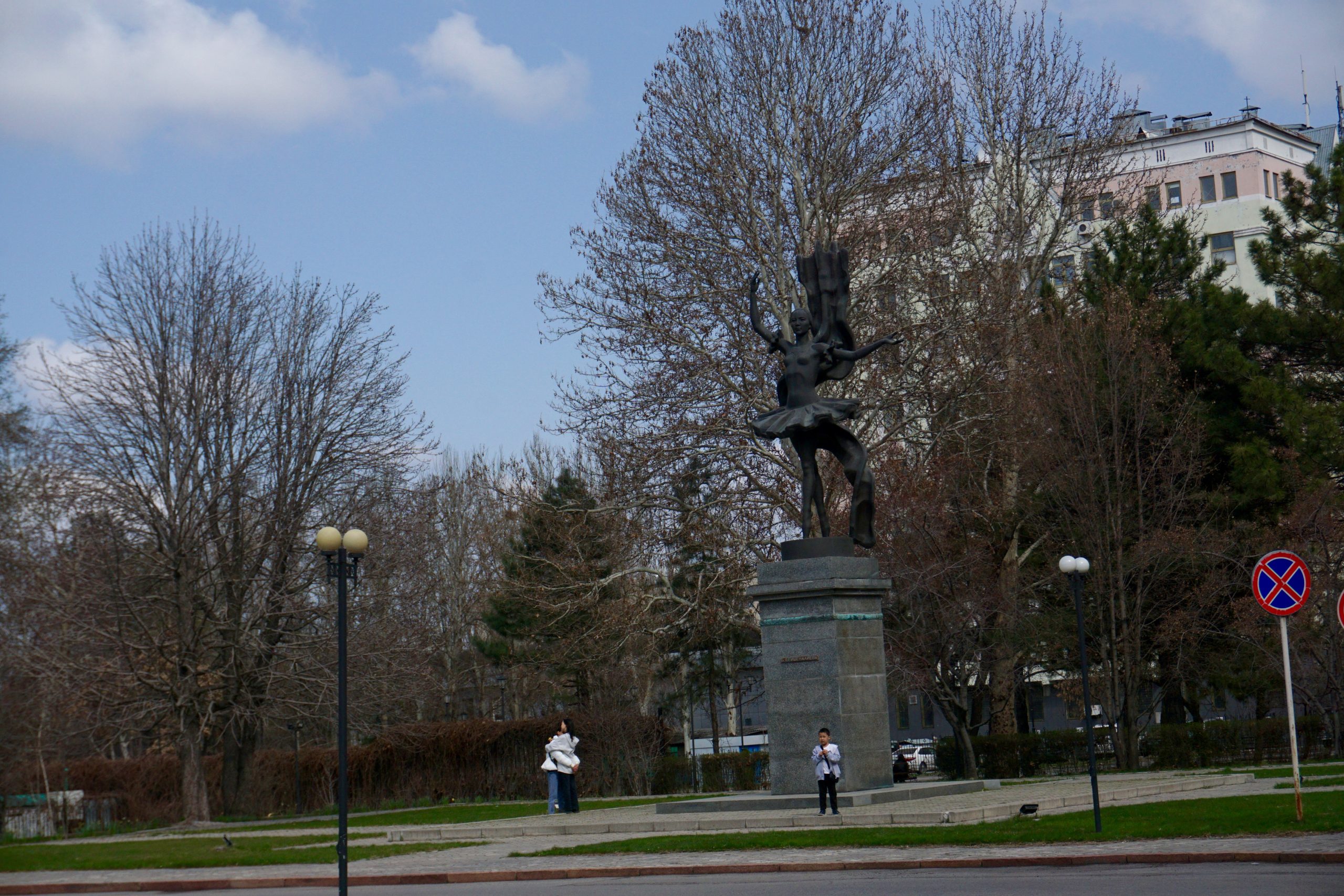 Her name is Bjubjusara and she was a famous ballet dancer and lived in the same house as Aitmatov and his family and the wife was said to have known about it, but Aitmatov did not want to divorce her (a quasi-honourable man, as divorce at that time had unpleasant social consequences for women). Then the ballet dancer got cancer and died too soon and Aitmatov was sad. That’s what Jarmilia told me.

At least in Bishkek, there are the largest number of statues of great people I have ever seen. It feels like you meet a new statue every few metres. Most honour men, but there are also a few women. This one Yarmilia called the first feminist of Kyrgyzstan: Urkuya Salieva. 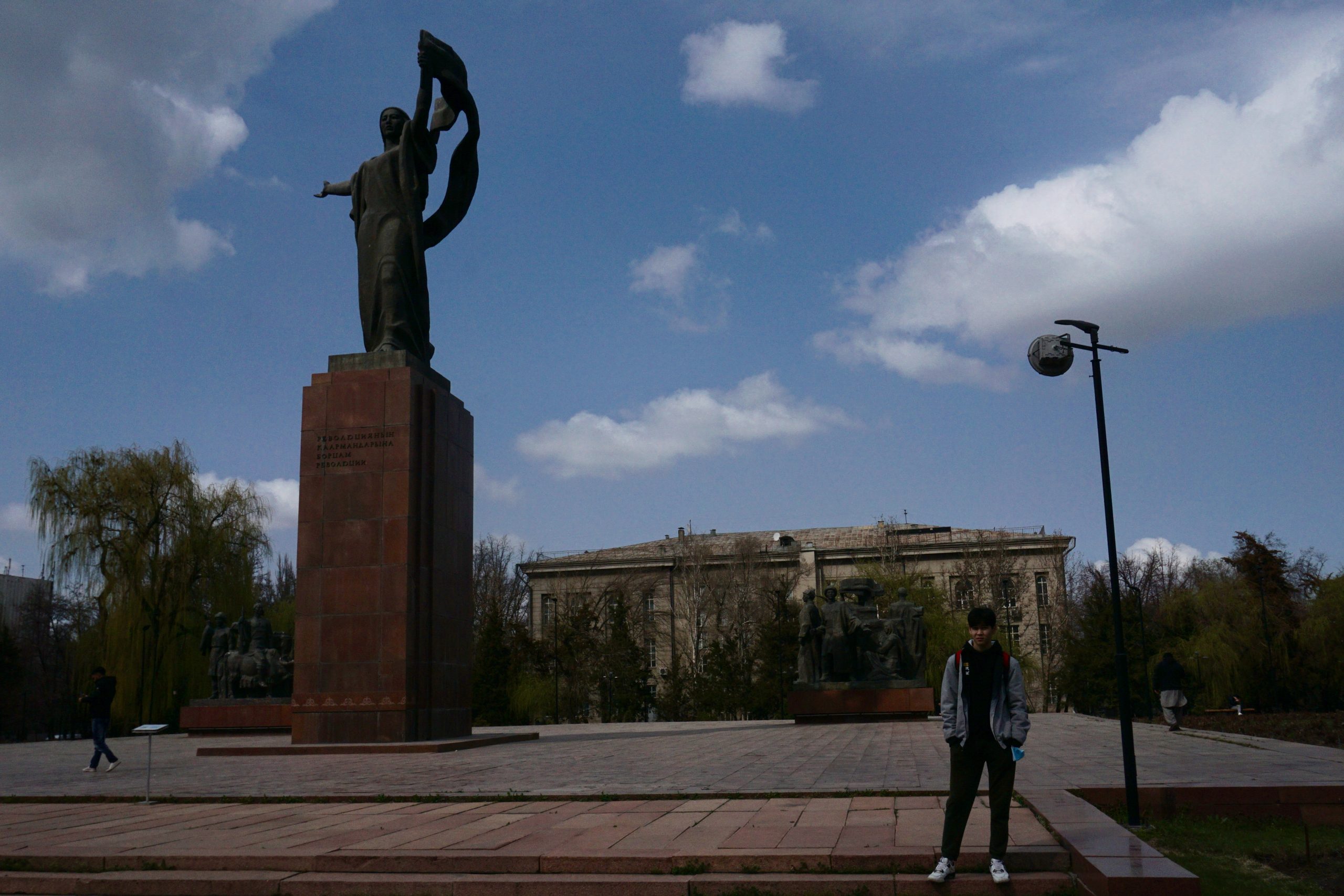 She was born in 1910 and joined the communist party in 1931, fighting tirelessly for more equality and equal rights for the poorer and women. The people followed her. Anti-Russian elements, however, did not like what she was doing – especially the collectivisation that had been decreed – and so they murdered her in 1934 (her husband at the same time). Some say, however, that it was rather because she was also so strongly committed to equal rights for women. So she only had a very short life, but in it she achieved quite a lot. (The people also received two statue complexes, but you can’t see them well in this picture, they are behind her). She is very important to the women of Kyrgyzstan today, many women’s demonstrations start at this monument. You can read more on Wikipedia.Wikipedia. 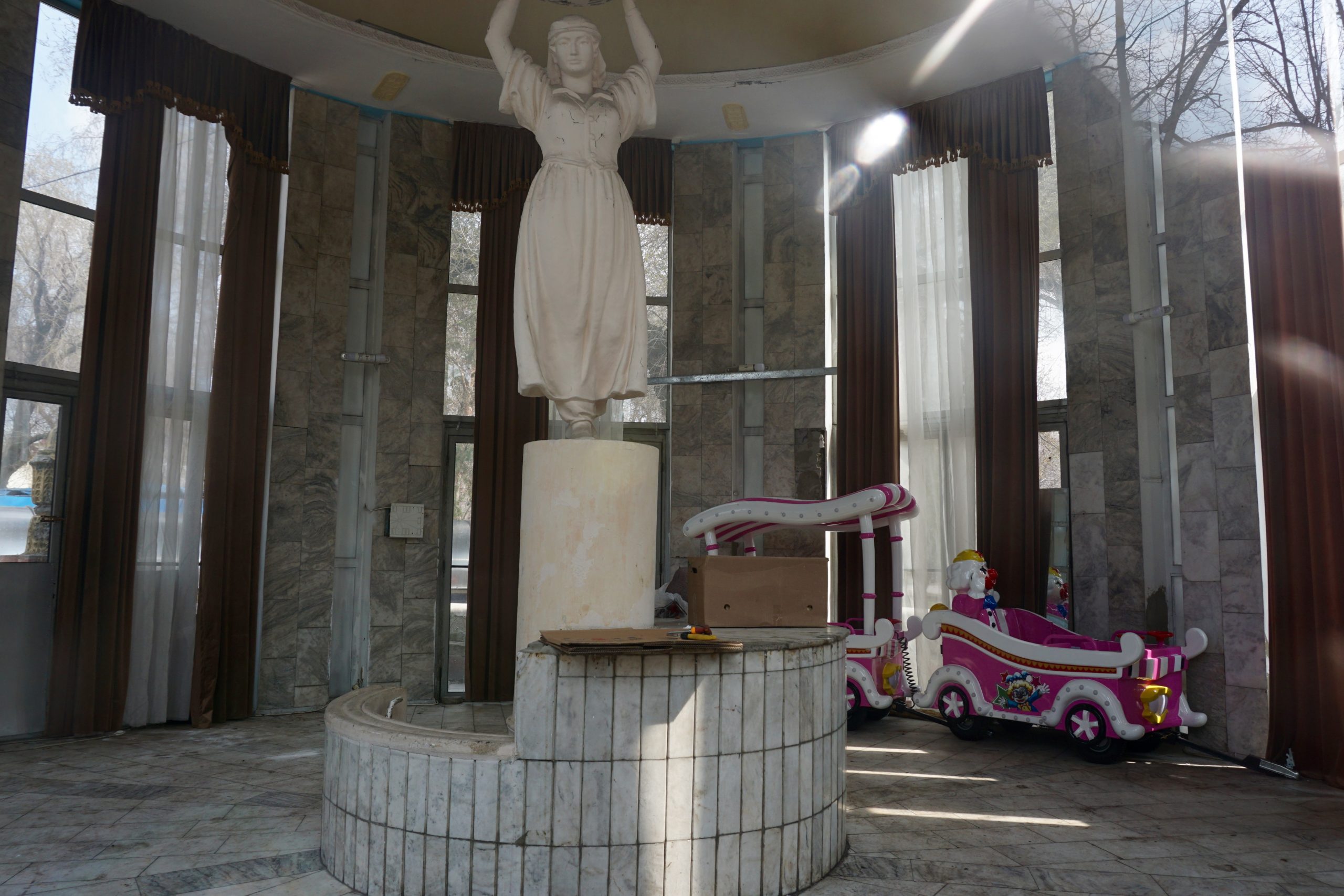 My head was rumbling a bit from all the impressions and my feet were hurting from all the walking, so Jamilia complied with my request for a nice café. I had already seen in other displays that there were fantastic looking cakes and tarts here. And so we enjoyed ourselves. 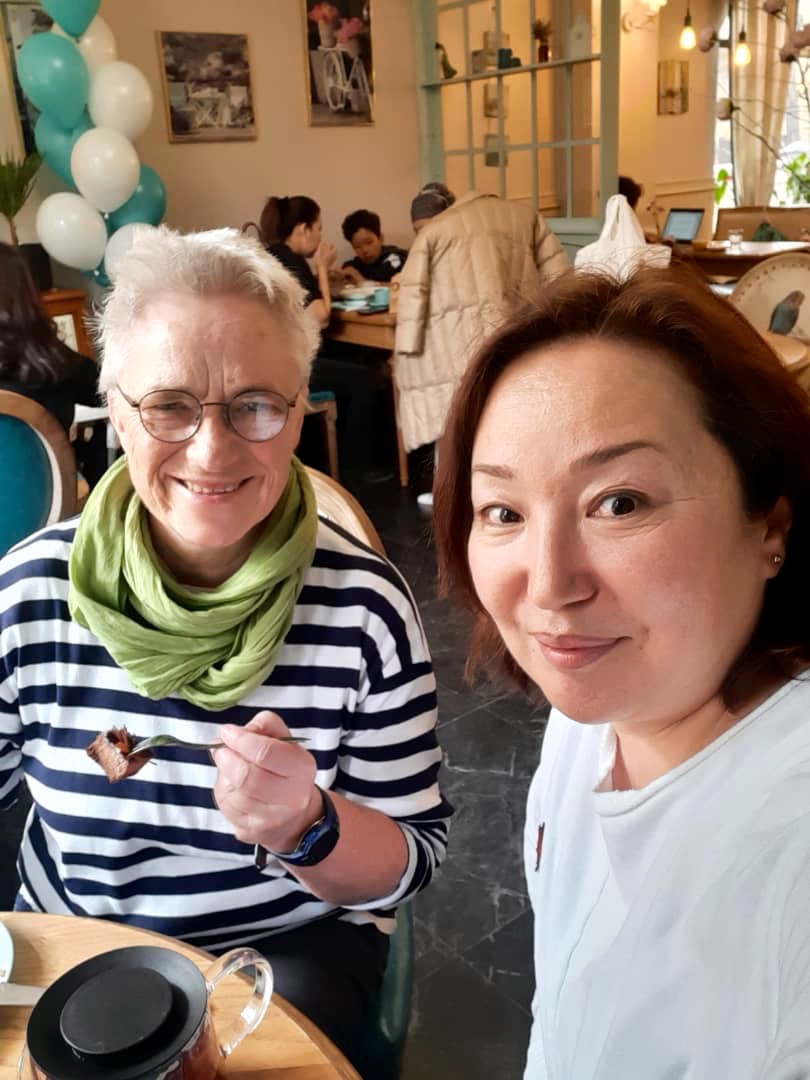 Today I am gong to meet more women. Excited? Me too!