After this tour, considering my limited time, there were only 2 directions I could aim for: Issyk Kul in the east or Osh in the west. For Osh, however, I would have to go back to Bishkek and from there in the other direction. So I decided for Issyk Kul, the second largest mountain lake in the world (the largest is Titicaca).

It seemed to me the smartest thing to do was to look for accommodation via booking.com – then you don’t have to search around for long and you know right away where you want to go. Important to me: internet, laundry service, someone who speaks English and not too expensive. Rakhat and I eagerly looked around on the mobile phones – and he then found the one I was travelling to and it was a good choice.

The accommodation was planned for digital nomads or similar. – People who need a good infrastructure for living and working. A new large building complex – and almost empty. 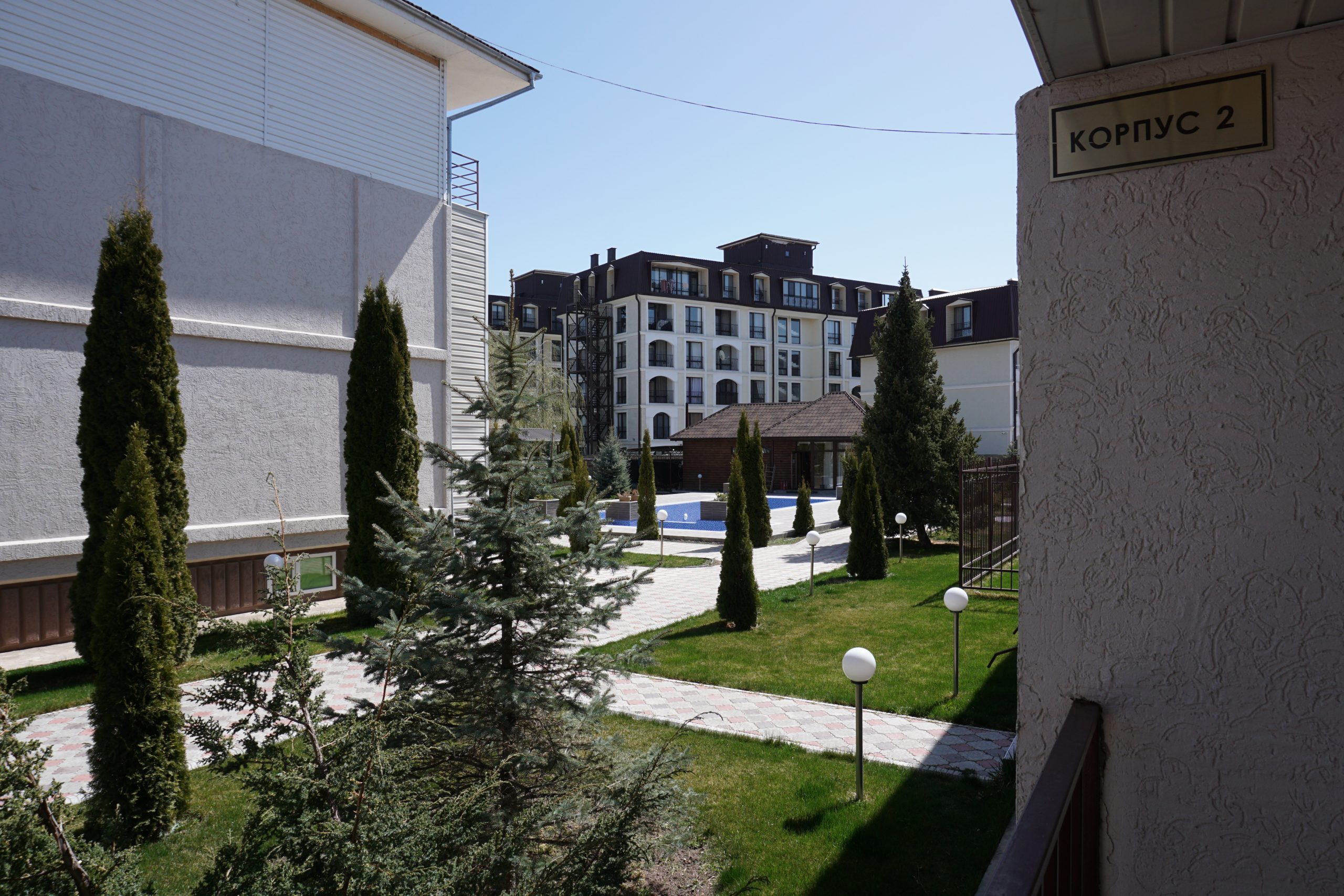 It was quiet there. Extremely quiet. Dead quiet. This was partly because the complex was flanked by 2 large holiday resorts that were still closed. And there were hardly any guests in this complex either. Despite the very nice (really good English speaking) manager and other staff, it had a strange atmosphere, but after these days in the mountains it was really pleasant to sleep in a tippy-toppy bed again, drink coffee in it in the morning, surf the internet and doze around. But I couldn’t stand the dozing for long, so I went to the beach first. The beach was populated by cows instead of people. 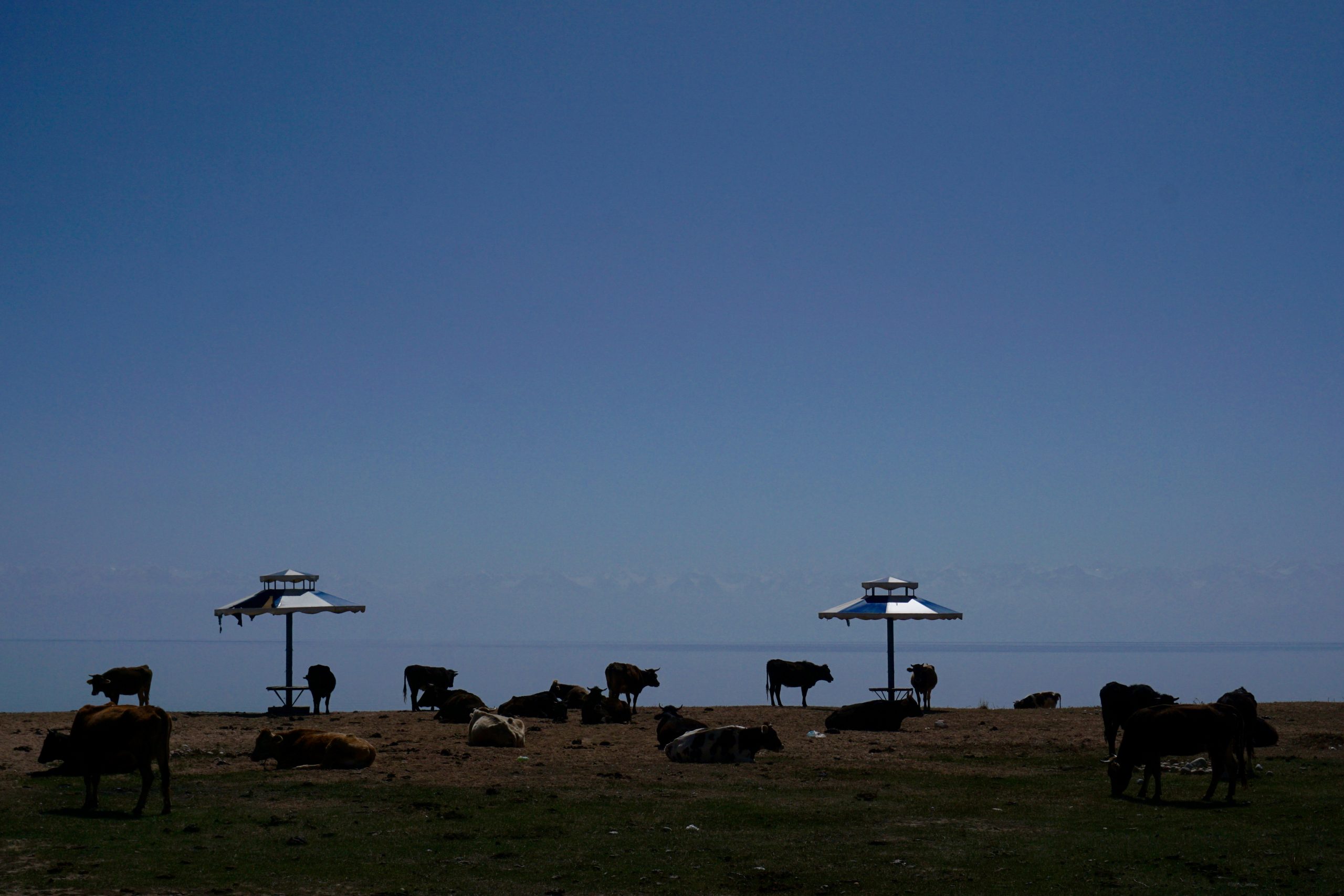 To the left and right were closed-off beaches from the resorts. 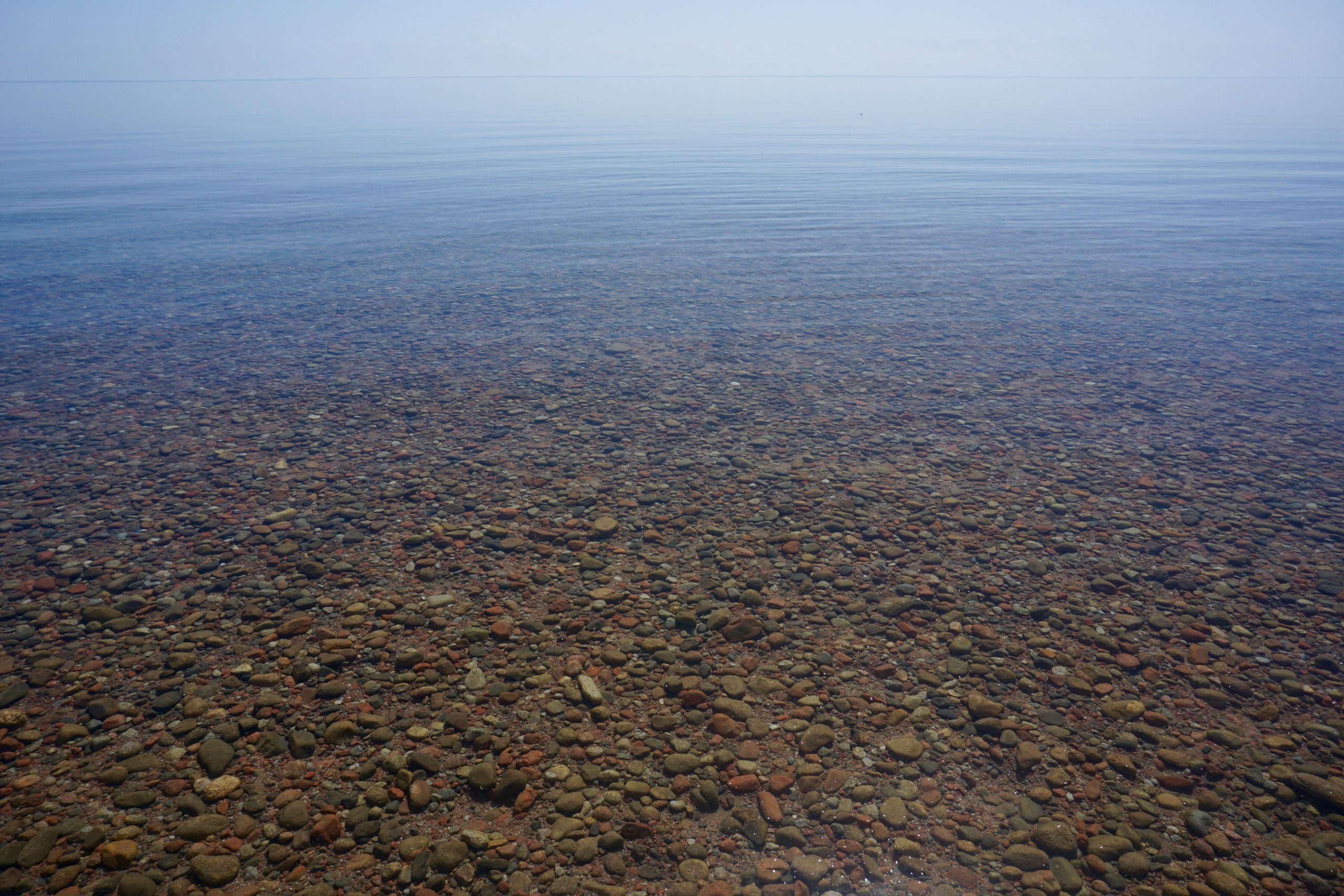 The water was inviting and clear – and even though the air wasn’t really cool, I couldn’t bring myself to take a dip. Instead, I set out to explore Chon-Sary-Oy. However, there was rather nothing there. The great non-seasonal emptiness. 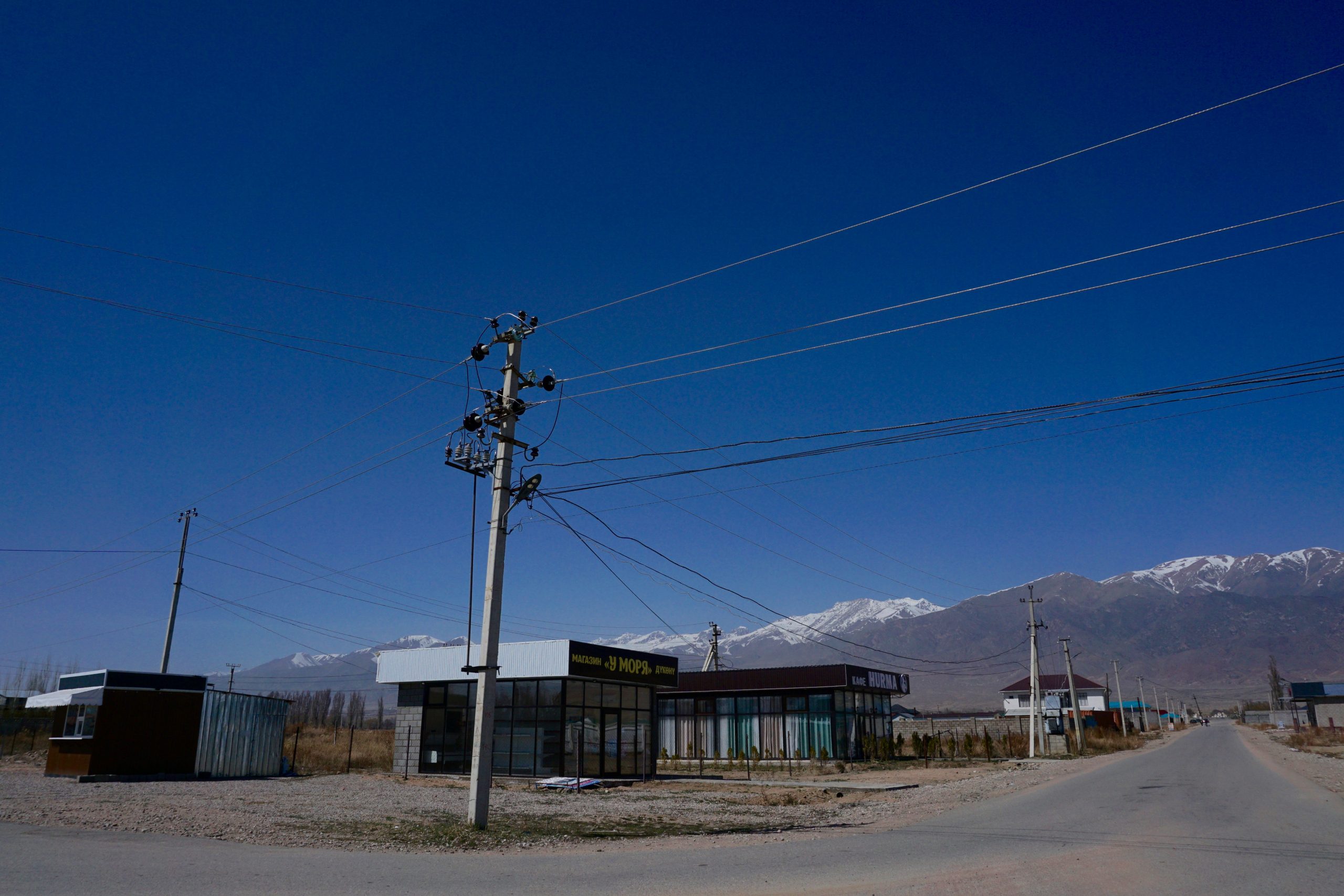 But I did discover something that I wanted to explore more closely: a cemetery! I had always seen them during the journey and was curious to take a closer look at one. In the past, the people here were mostly nomadic. And you don’t build graves with something to commemorate them, because you never know if and when you’ll pass by again. Unless you were a really great person, then you got something where people could make a pilgrimage.

But then the Soviet Union came and there were more settled jobs and more wealth. Although everyone was supposed to be equal, they weren’t, and it became fashionable to give the deceased a more magnificent grave. In the process, many remembered nomadic traditions and built a metal yurt over the grave. This looks like a birdcage and there are quite a few of them in the cemeteries. They also put pictures of the deceased, either old photos or carved drawings like I know from Armenia. In any case, there is a great variety of grave structures in such a cemetery. Here are a few examples. 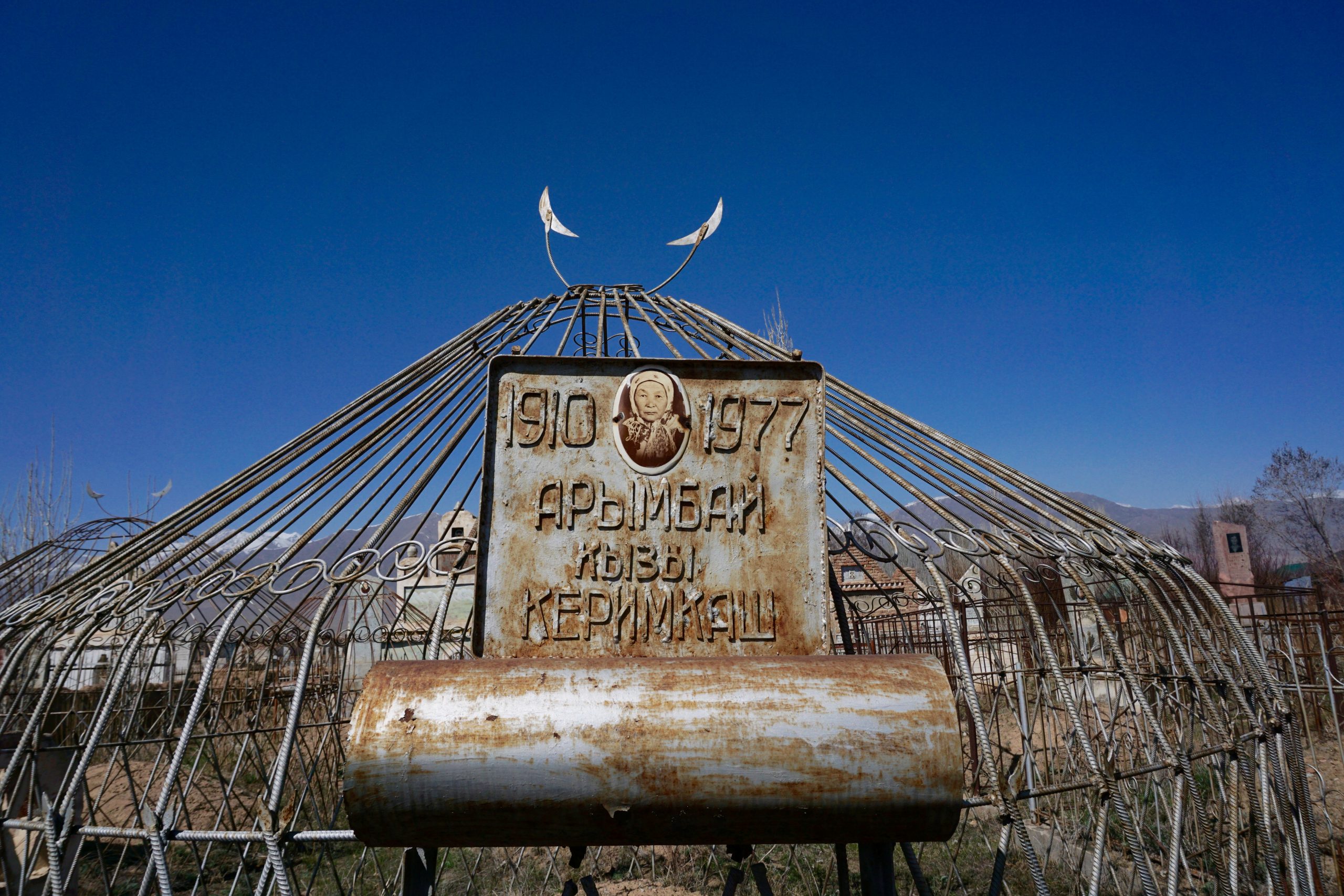 Yurt rack with a kind of mailbox? 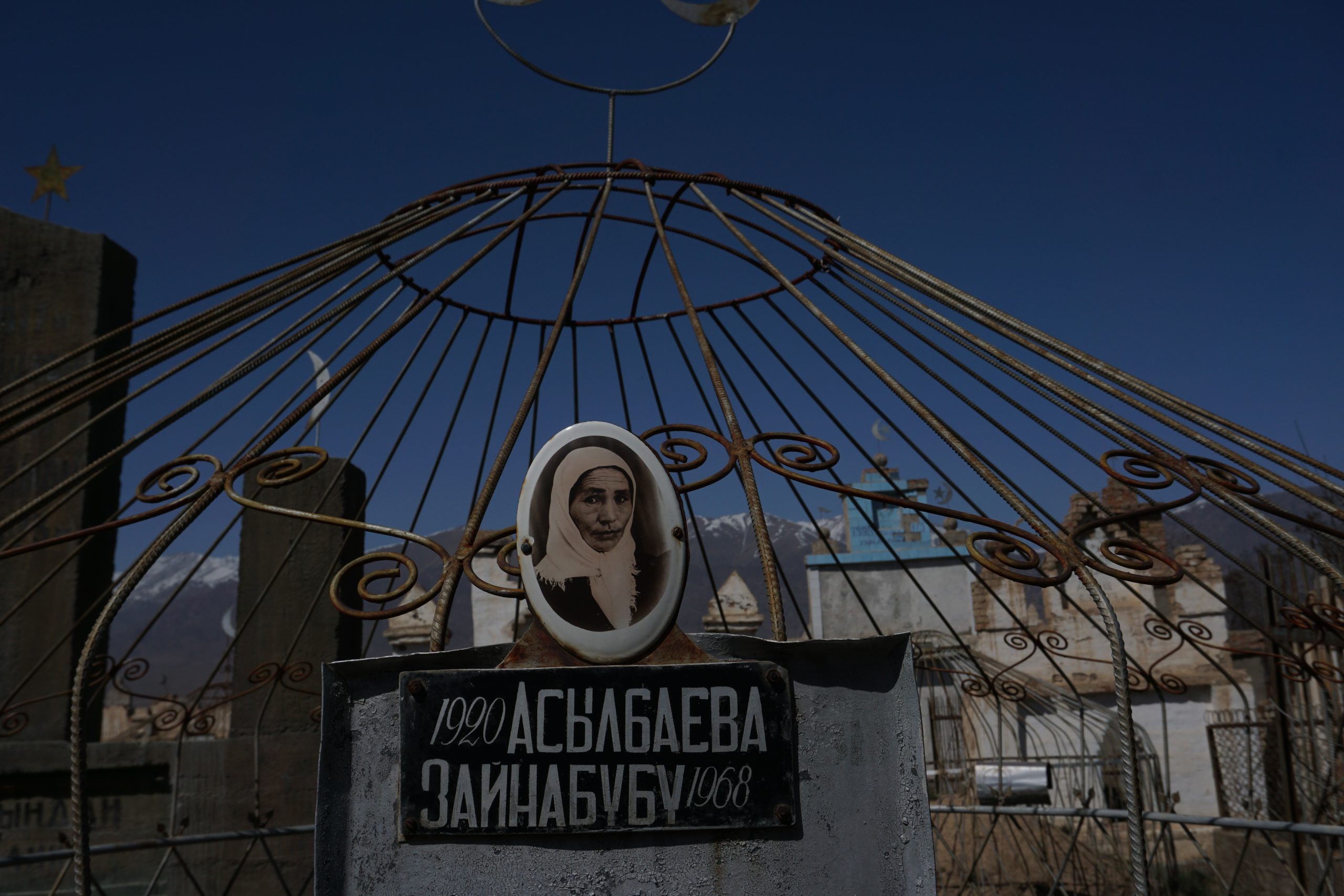 another yurt rack with a good photo 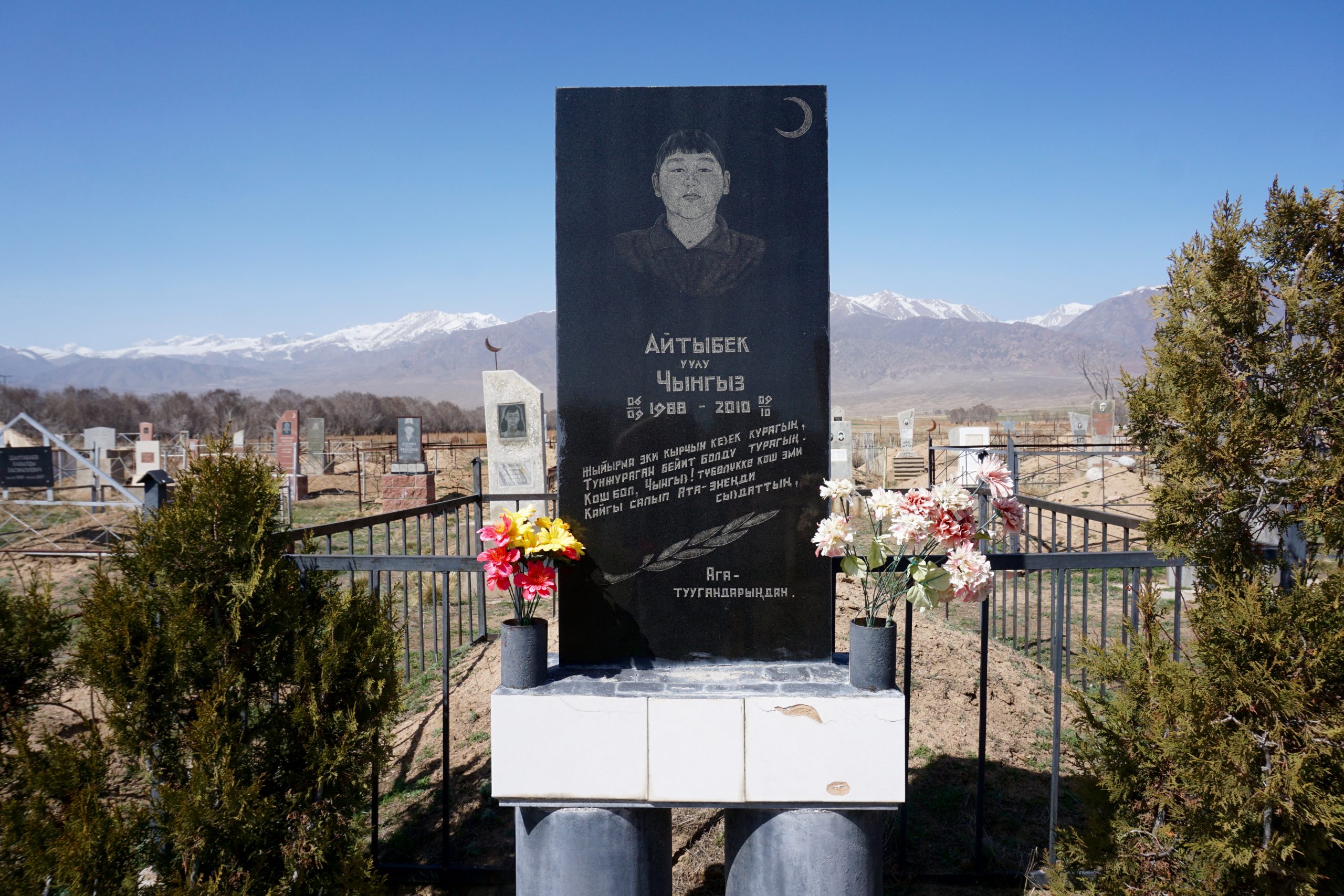 Usually, each person gets their own grave, no married couples or families who were together. 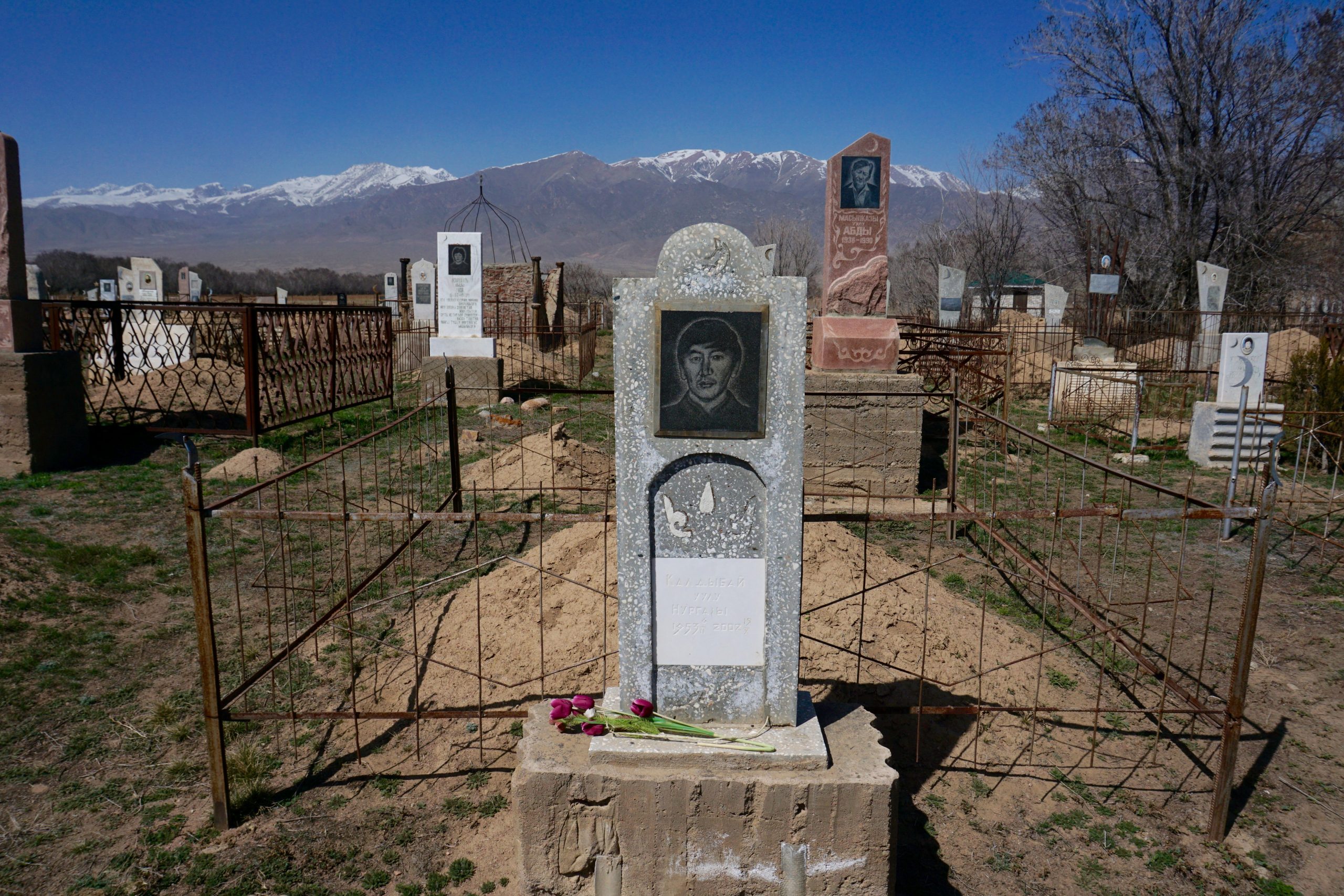 The exception was this grave, where the infant was brought together with the father. 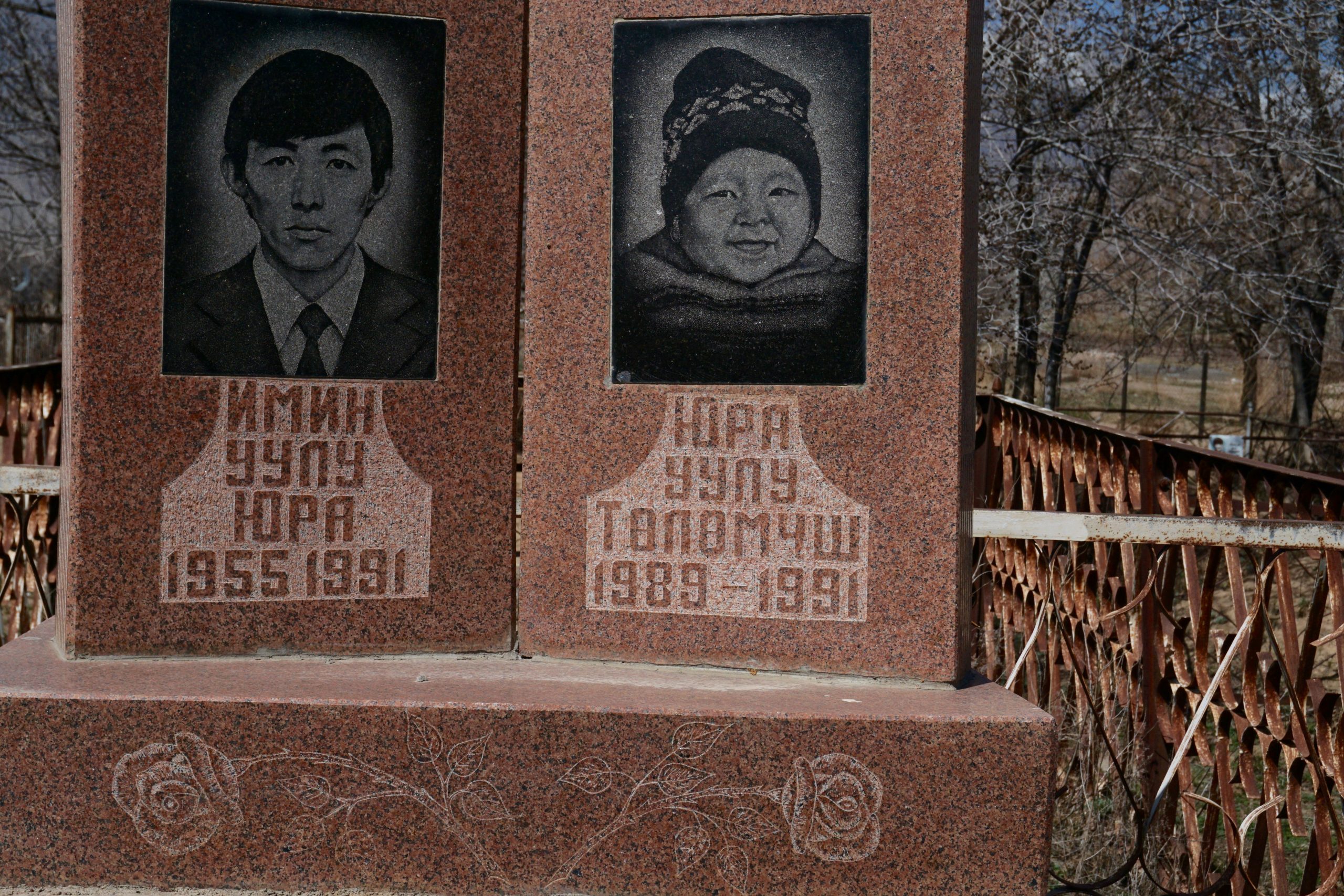 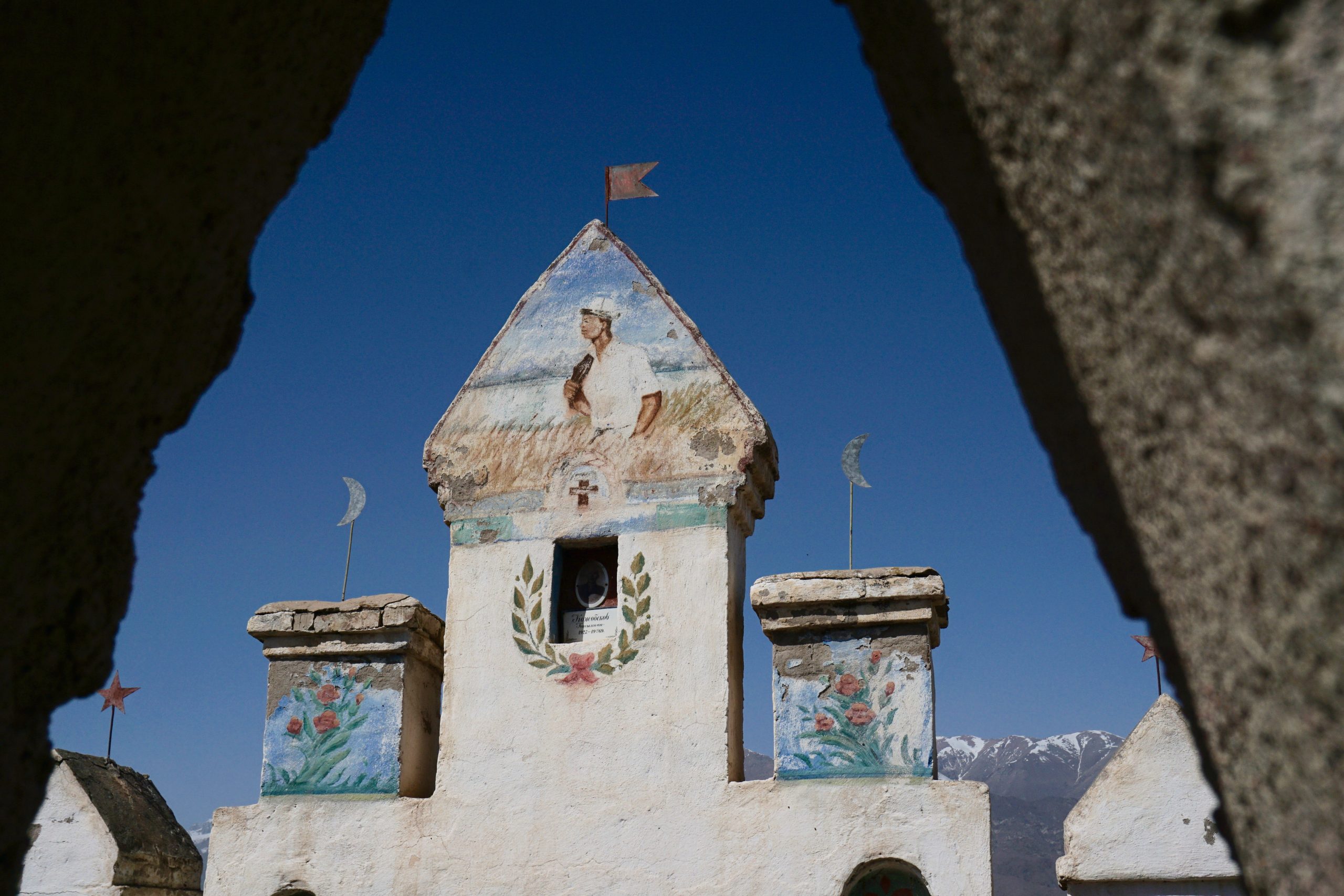 I continued my walk, but there was nearly nothing to see 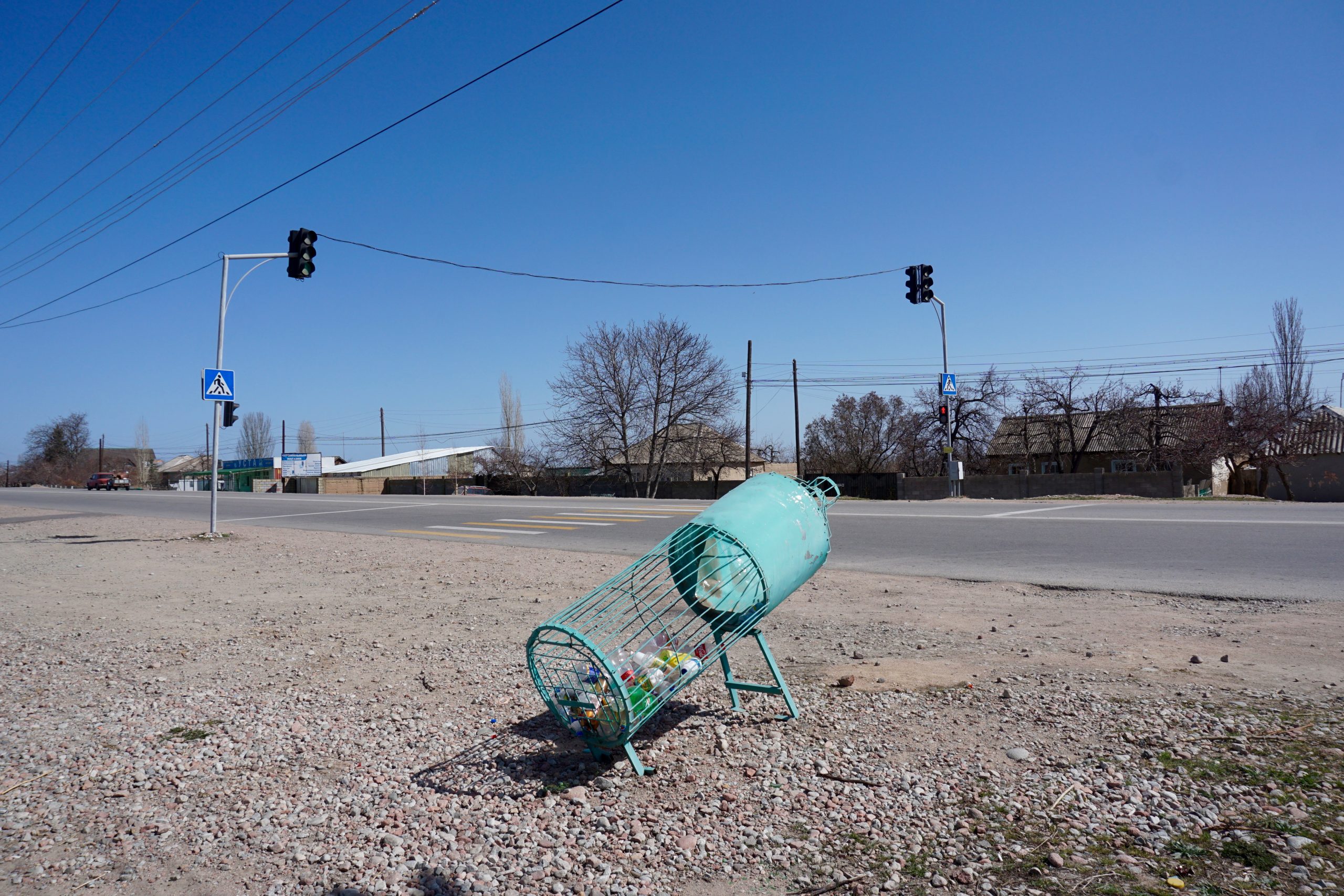 Not even the rubbish bins are full

I didn’t want soooo much lack of experience and so after 2 nights I set off to experience something very special. Two acquaintances had suggested it to me and even though I found it somehow strange, it would have seemed even stranger not to try it out. And I’ll tell you about it in the next post.