Life in the sanatorium is very regimented. I was given 2 slips of paper at the beginning, one for my room, another for meals. At the end I got them back and had to hand them in again at reception. Who knows what would have happened if they had got lost! There was also a booklet. In it were the time regulations and space for treatments etc. You had to carry it with you and then hand it in and then the data was entered. 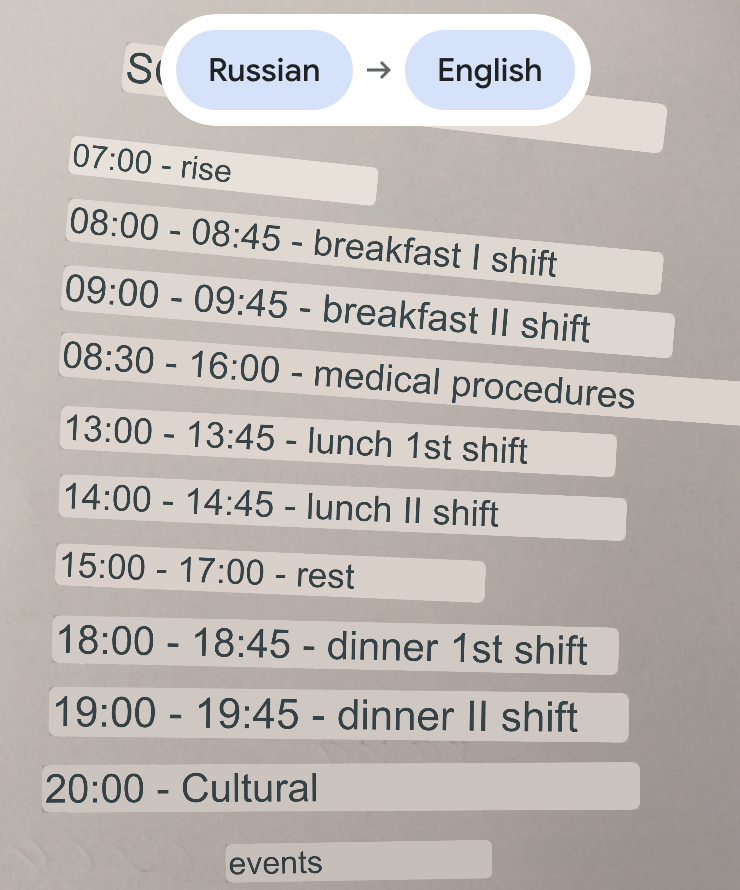 However, there was no second shift. Right on time for meals, the needy shuffled into the dining room, where the table was already set and the teapot was ready. Then women drove the food trolleys through the corridors and served the portions. My highlight every evening was a small salad plate. It was meat- and side dish-heavy – and not really a treat for me. 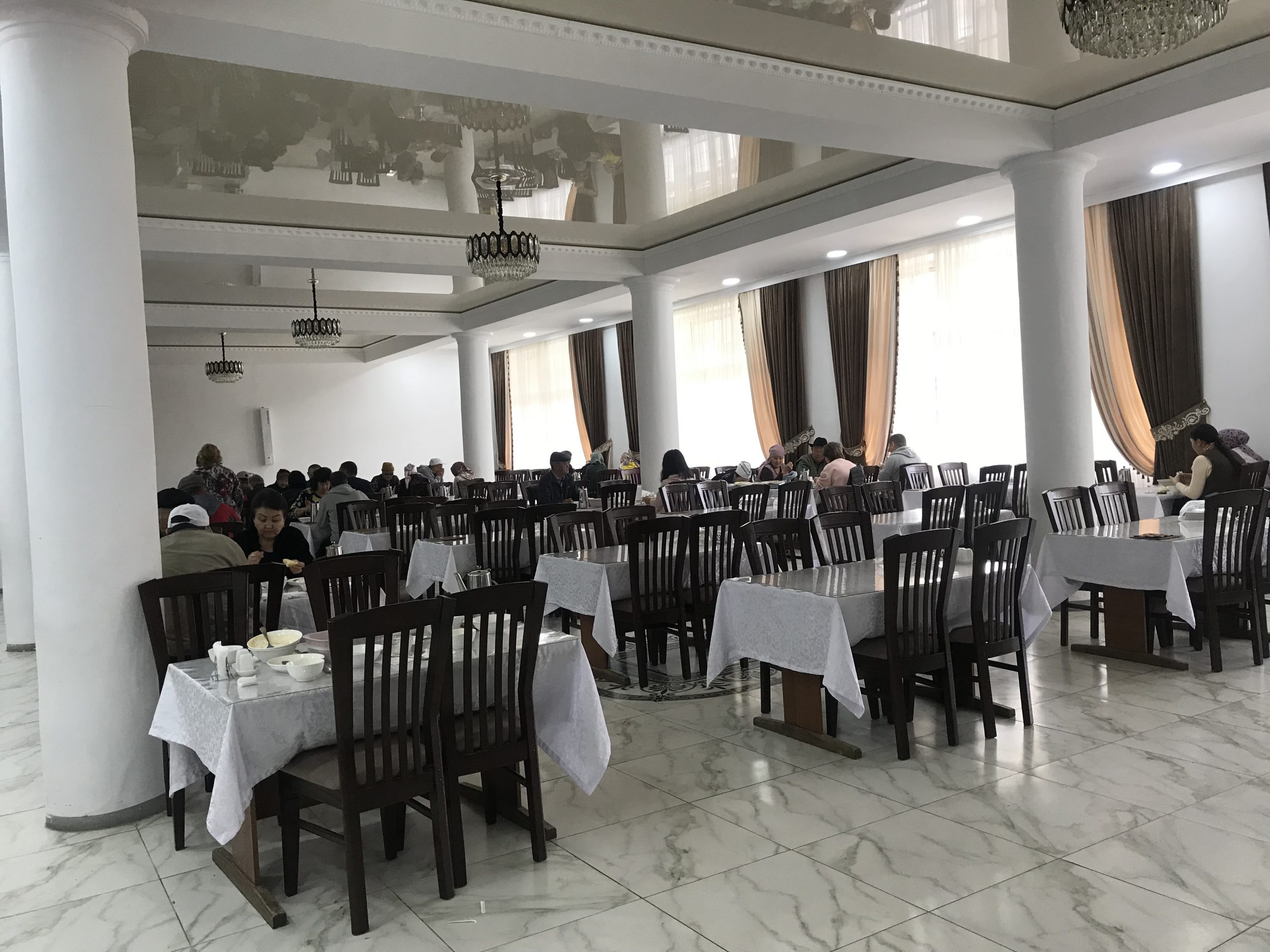 So I ate my breakfast and then went to see the doctor. But she didn’t want me and pushed me to her colleague, who spoke a little English. However, she was probably a bit inexperienced in taking blood pressure or too excited. The first test showed 60:20, which couldn’t be right, so she took my other arm: 80:40. Was I not dizzy at all? (I’m more like 120:90 or something). I pointed to my knees: Ouch! (They’re really hurting a bit right now). Is something wrong with my veins? I don’t think so. Then I got written up: ECG (done right next door – I don’t know the result, but it was obviously not worrying), swimming pool, Parrafin, mud, gymnastics and something else. And if I wanted a massage, that would be OK too, but I would have to pay extra.

So I wandered off with my booklet and found the building for the treatments, but it was closed. Strange. 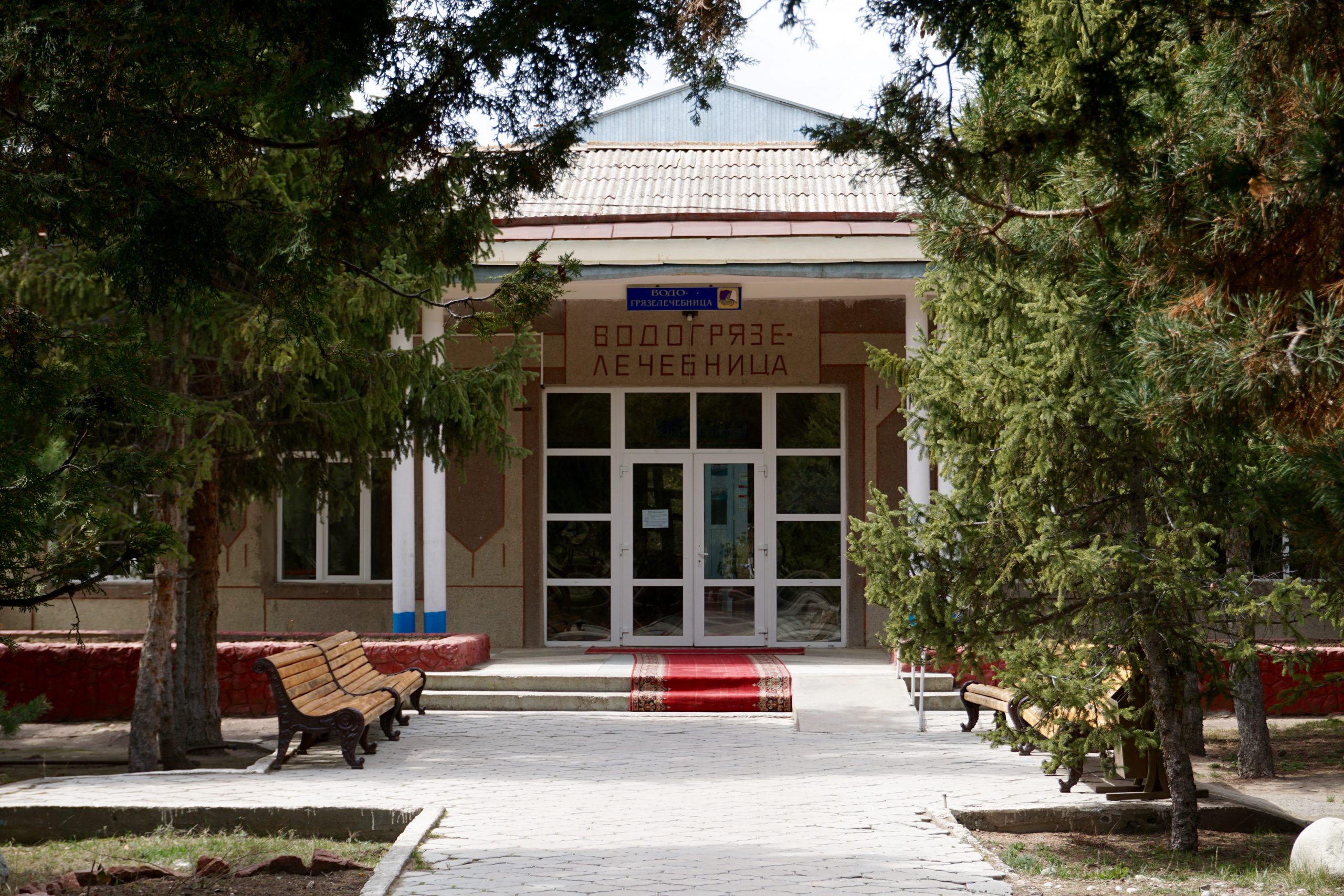 Only the massage wanted me (20,- Euro), but it was strangely dark at her place. I wandered around for a while and thought I was too stupid – but then a light came on: power failure! Nothing happened – not until after noon.

So the next attempt. First I was sent for a swim. For women, bathing caps were a must – even if the hair was as short as the men’s. Also bathing slippers (I had forgotten them in the room). The nice lifeguard found me some somewhere and off I went into the swimming pool! It was special. Very special. I don’t know how to describe it (I couldn’t take a photo), it was all very shabby and rustic, an approx. 15 m long pool filled with warm salt water. 3 gentlemen (without bathing caps) and I (with bathing cap) swam around a bit in the deeper water, many ladies and a few children stayed in the low area and actually stood around rather happily. There were a few plants in the crotchety ambience and I felt far from home.

Then it was off to the paraffin. My legs were hot-wrapped and blanketed and I lay there like that. 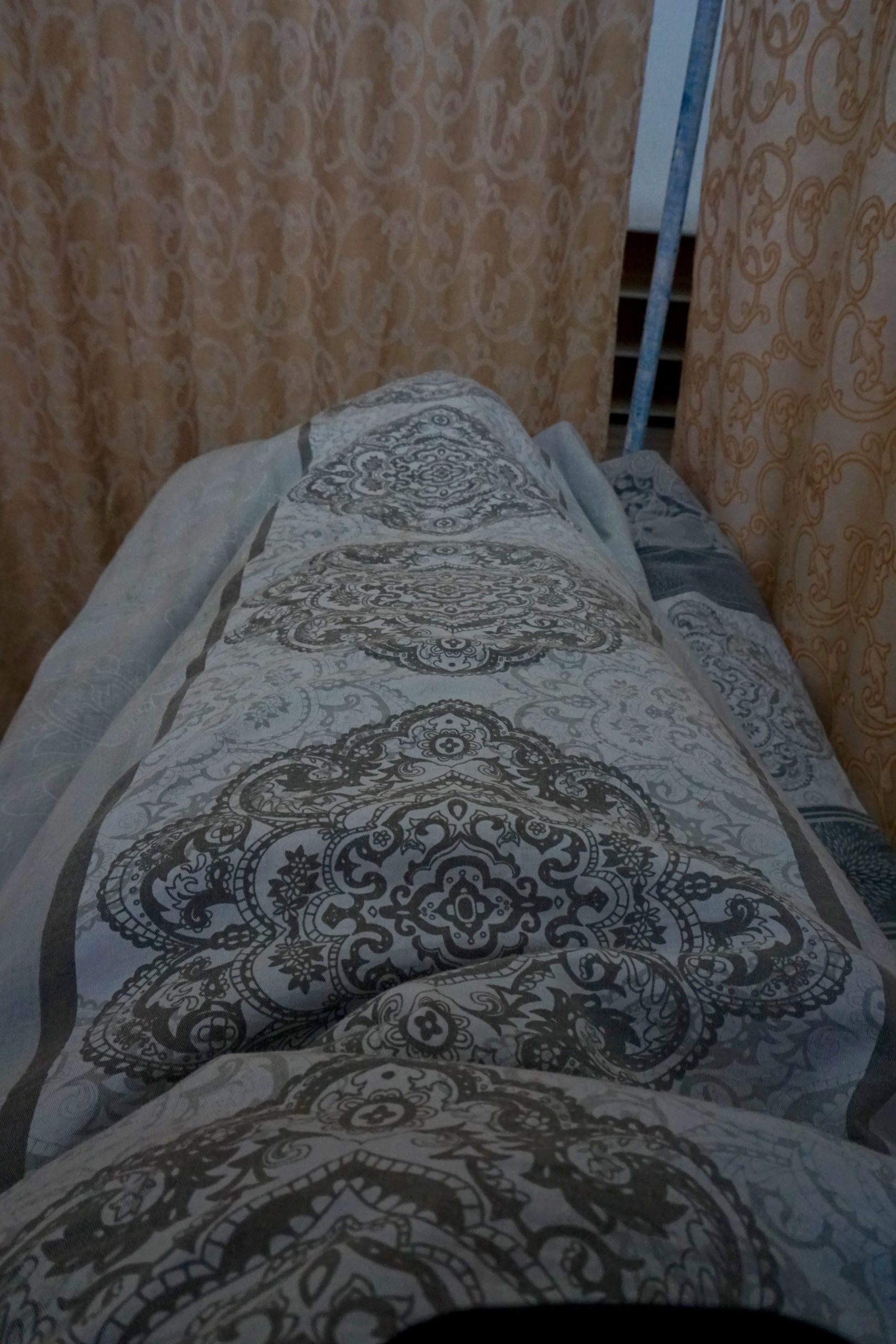 Paraffin wrapped legs under a blanket

That was actually quite nice. And then it was dinner time again. You always sit at the table with the same people. Nobody spoke English, but my neighbour was quite taken with me. She had been in Munich once, maybe to a sports event where she ran, but I didn’t really understand. Anyway, she told everyone that I was from Bavaria and was very happy. Her name is Sana, she lives in Bishkek and is 64 years old. She now has my Whatsapp and sometimes sends me little hearts or funny videos. Here is our farewell photo: 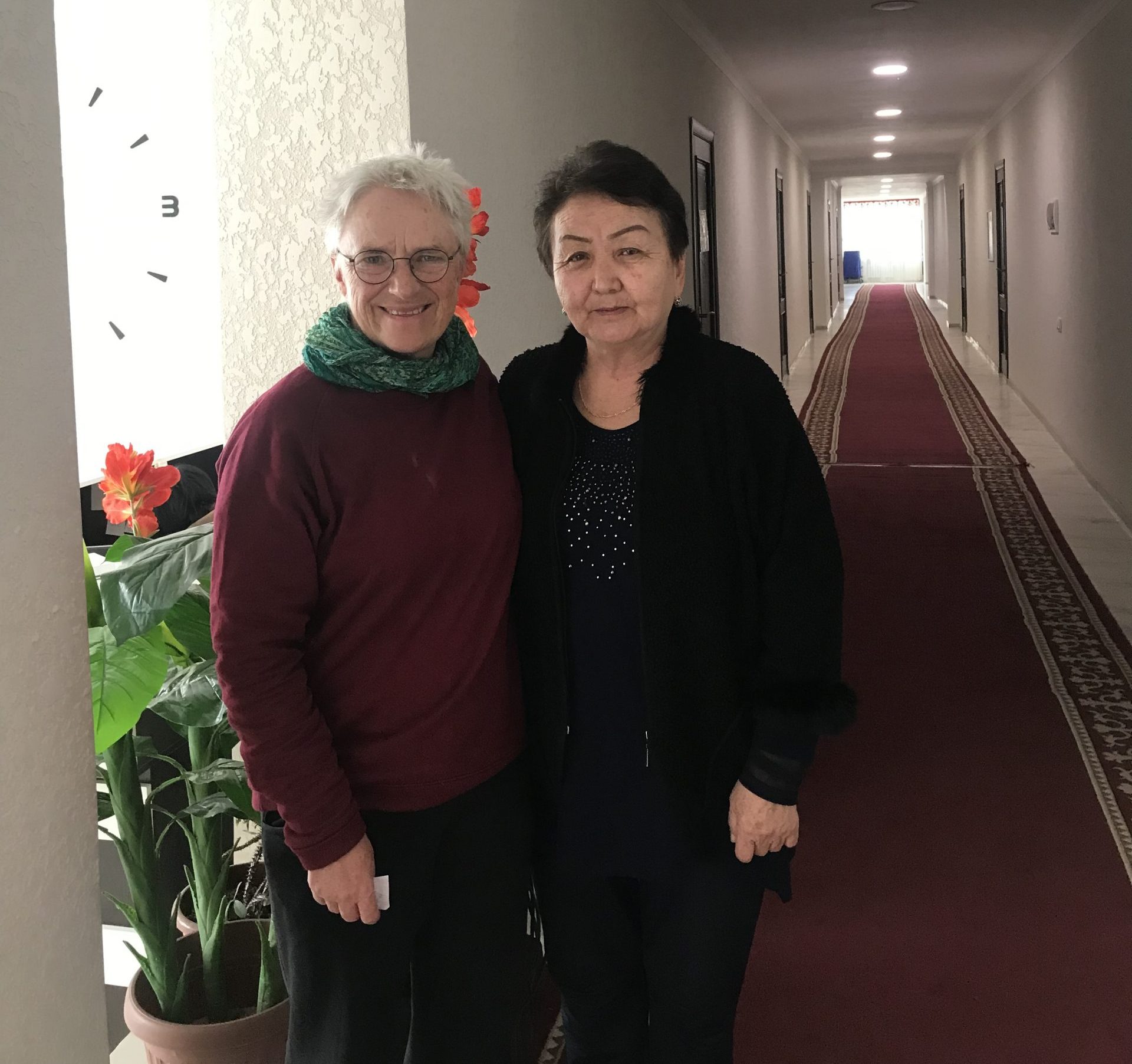 The next day I started my mud treatment. That was already very special. The mud master was young and nice and spoke a few English words. I had to strip down to panties + bra. Then a pipe was used to spread black mud on a steel bed covered with a sheet and I had to lie down in it. Then they put a plastic sheet around me and a woollen blanket on top and then I lay in the mud in this very shabby ambience with high humidity and had to giggle terribly. Next to me, the next woman was already coming in for a mud treatment. Here is the room with the woman wrapped up and the mud washed away. 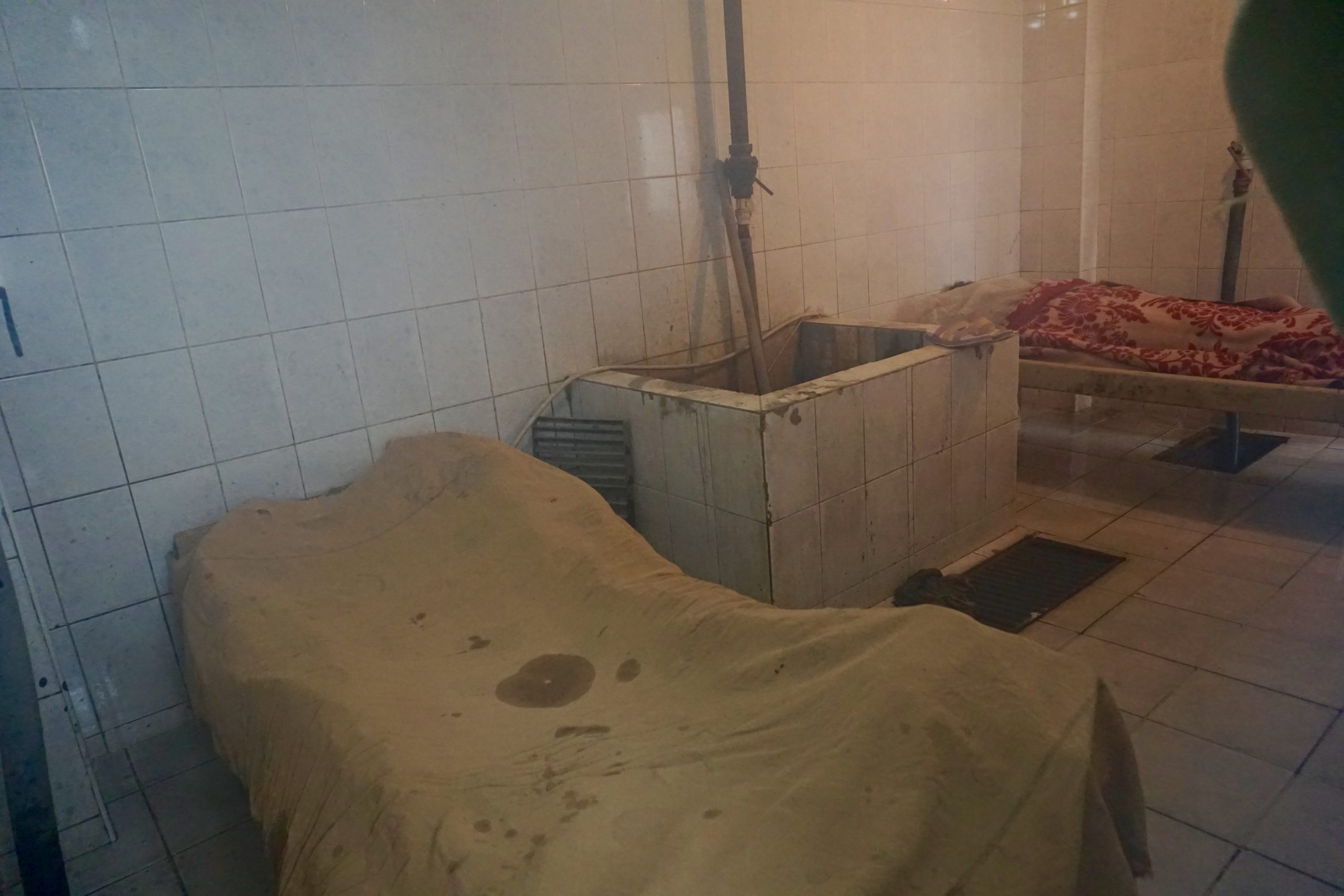 mud treatment room – waiting for the next person

Then I showered a lot and went to my suite and showered again and washed my panties and bra – and despite another wash they still smelled funny.

I decided: that was enough experiences! Treatment experiences, that is. My knees are still acting up. In the afternoon I did something else (next post) and in the evening there was another highlight: entertainment.

In the meantime I met another woman who spoke perfect French and I dug out my meagre vocabulary and so we communicated. She is a guide. And knows Rakhat. It’s a small world in Kyrgyzstan. We sent him a photo:

Her name is Meerim, she is 33 years old and has 6 children. She works for French-speaking tour groups as a guide and also at the high school as a teacher. Some women amaze me. She was here with her mother. She has 6 children and 10 grandchildren herself. Sana, too, something like that. We then went to the Saturday evening programme: a concert!

A lady came on stage, recited a poem and several songs. Then 2 women + 1 man came on stage and sang songs, the man playing the accordion and the woman Komüz. Then they all recited something individually and then the poetry lady again and so on. 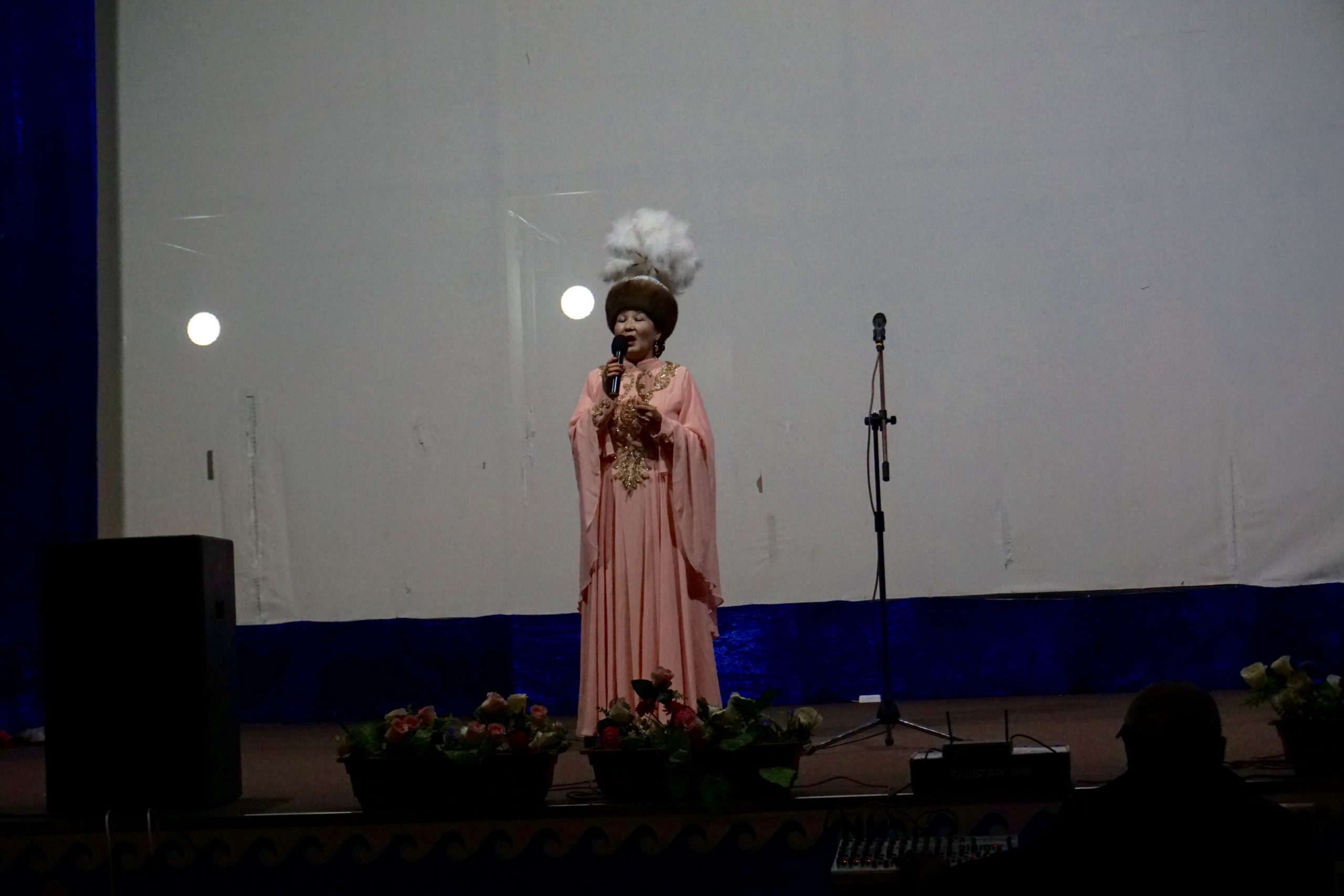 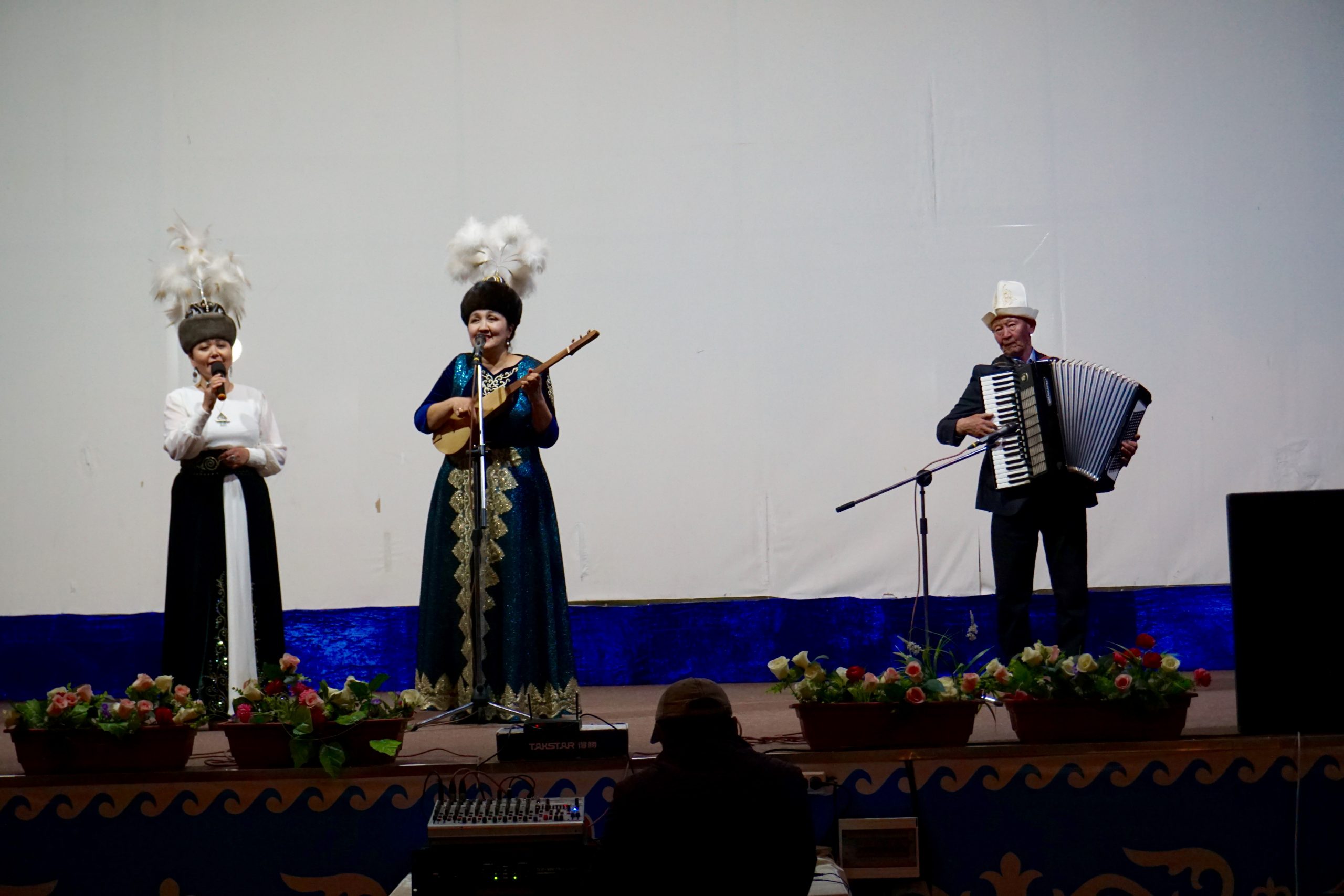 The audience was sparse (many had already left), but the mood was good. Meerim, Mama and Sana were singing and clapping along and 2 women were even animated enough to dance a bit. 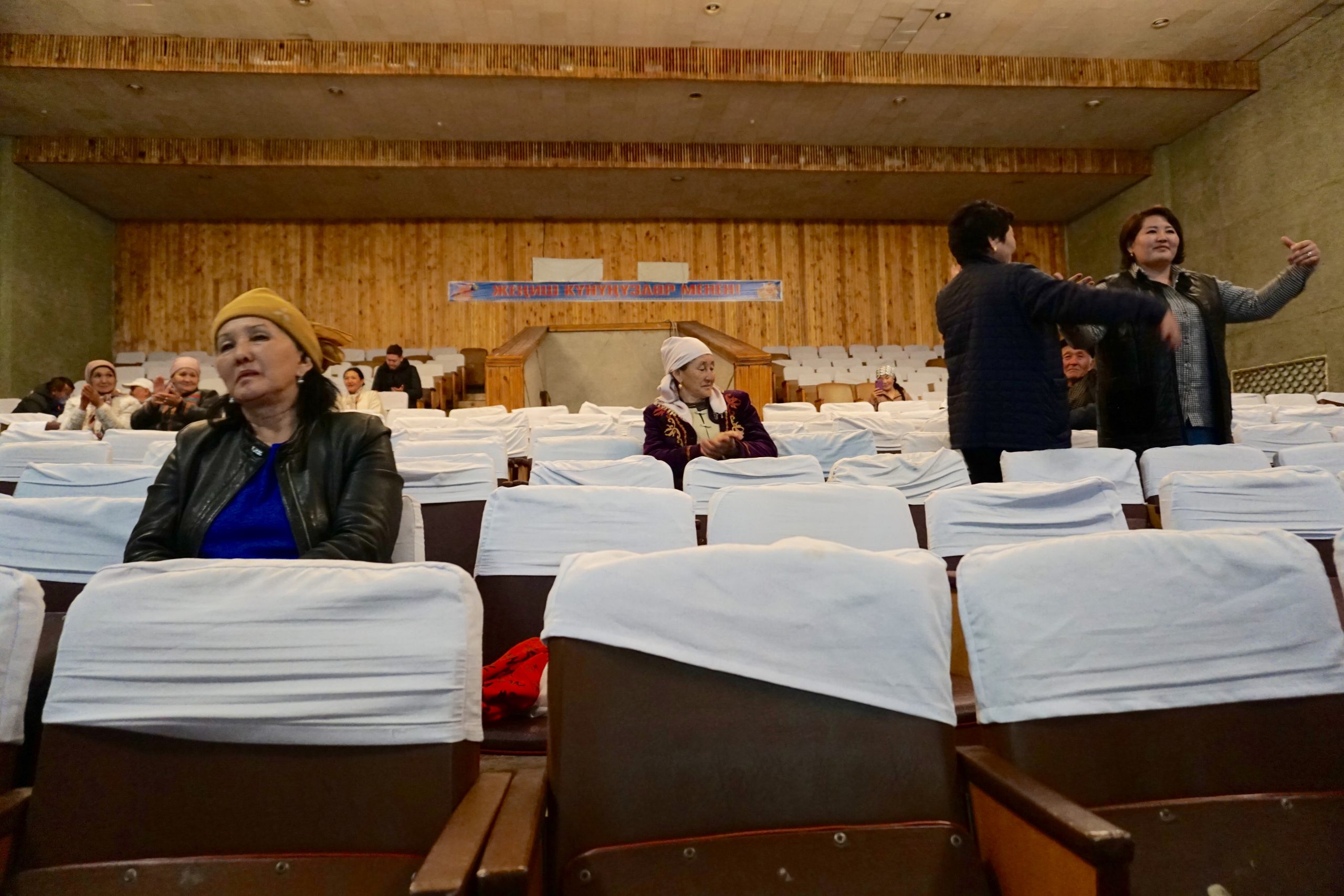 My conclusion: it was really worth it! Everyone somehow knows this legendary sanatorium, it belongs to Kyrgyzstan. And so I had the feeling of having experienced just a little bit more of them. Or rather: to have shared a little bit of life. I made new experiences. I am happy with my decision to do this.

But in the afternoon I did something else. And I’ll tell you about that in the next post.