Goris – chessboard, graveyard and other rocks

I sat down in a minibus again. And I learned something new about modern travel: a taxi app! At home I don’t drive a taxi and in India I’ve always negotiated directly, although I’ve already been shown Uber by locals. They don’t exist here, but something else and I’m mostly amazed. Driving a taxi is not that expensive and so it sometimes fits into my budget. But of the 5 taxi rides I’ve taken so far, I’ve only done one with the app. It’s handy when you’re in a place where there aren’t always people around who you could just flag down. So I took a taxi to the bus terminal and drove 250 km south by minibus.

There is the province of Syunik and, among other places, the town of Goris, where I wanted to start my trek. Goris has a population of over 23,000 and is strategically located on the Iran-Yerevan route and also Stepanakert, the capital of Nagorno Karabakh. Nagorno Karabakh is about 70 km away and Azerbaijan only 10 km.

The area was already settled in the Stone Age, at the beginning of the 19th century it came to Russia and with the help of a German architect they built the new city, nicely in a chessboard pattern. 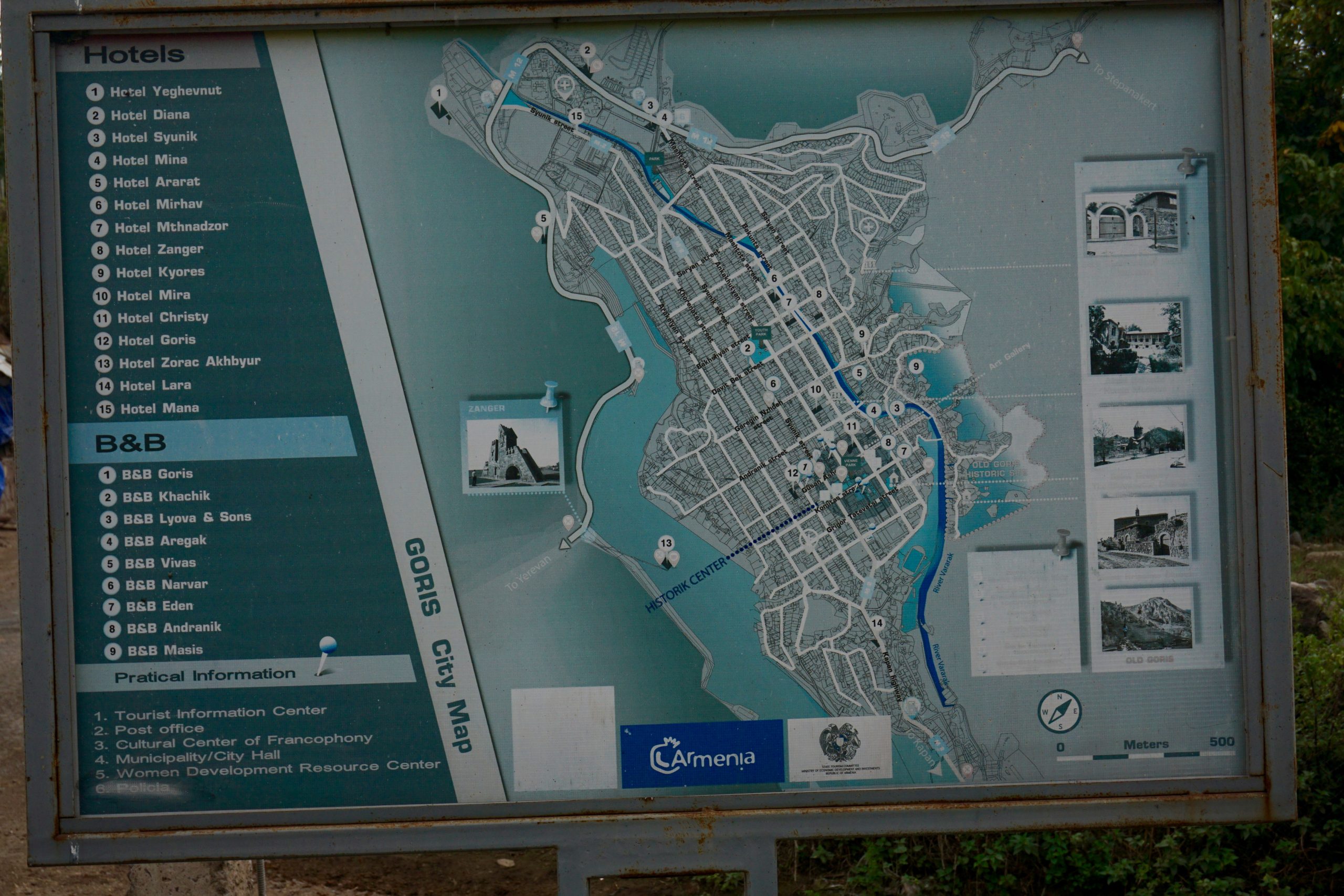 Tourists like to come here, the area around the town has a lot to offer and it is a good starting point for sightseeing in the region. There has been some investment, the cityscape has been spruced up and there is also nice accommodation.

I spent the rest of the day thinking I had lost my sunglasses and buying new ones (and back at the accommodation I discovered mine immediately….) and walking around a bit.

For the next day, the “Old Goris Walk” was on the agenda, also a tour prepared by HikeArmenia. First surprise: overcast weather! I haven’t had that since Tbilisi. But it was perfect for the day.

First I went out of the centre and there it was not yet so cheerful. 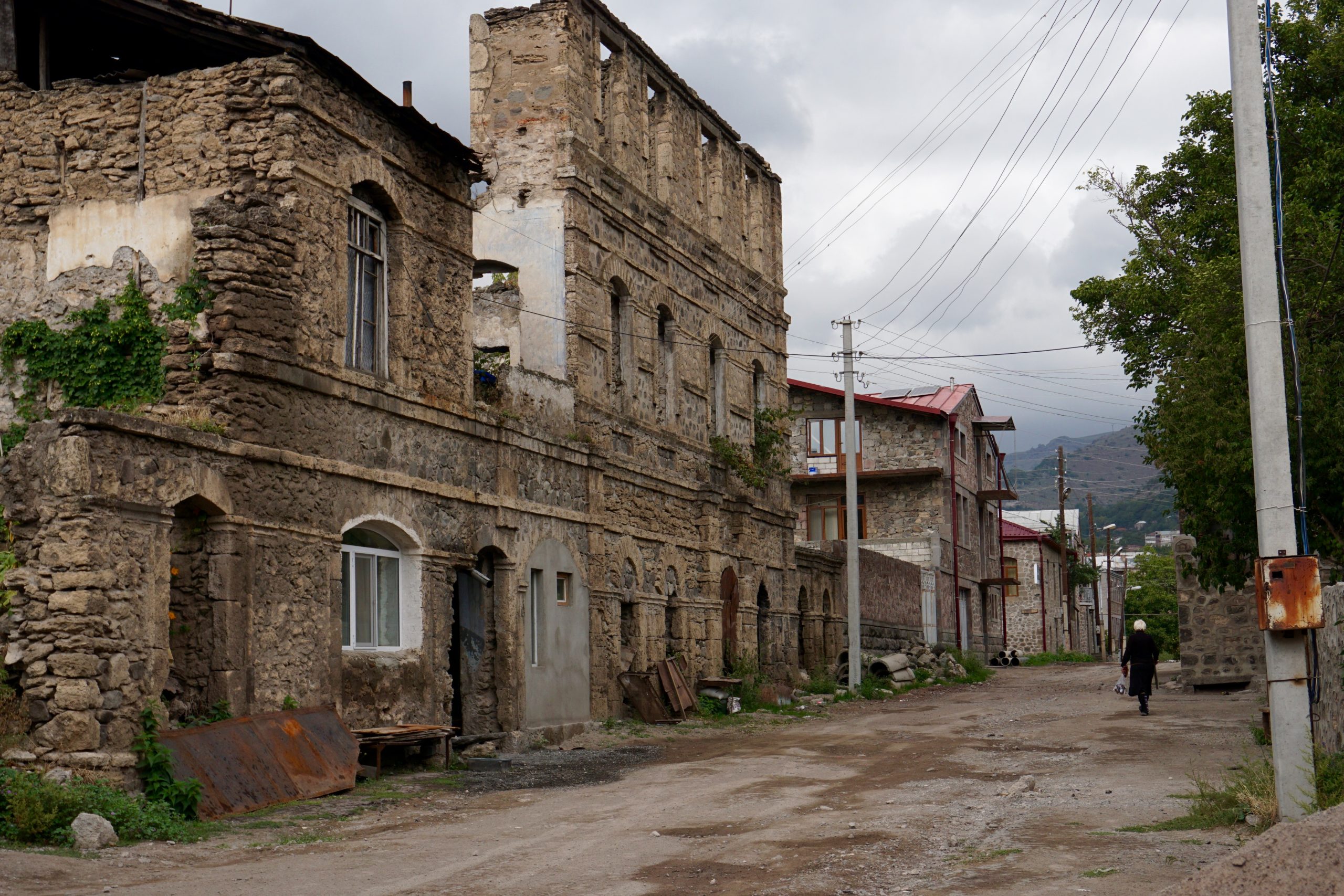 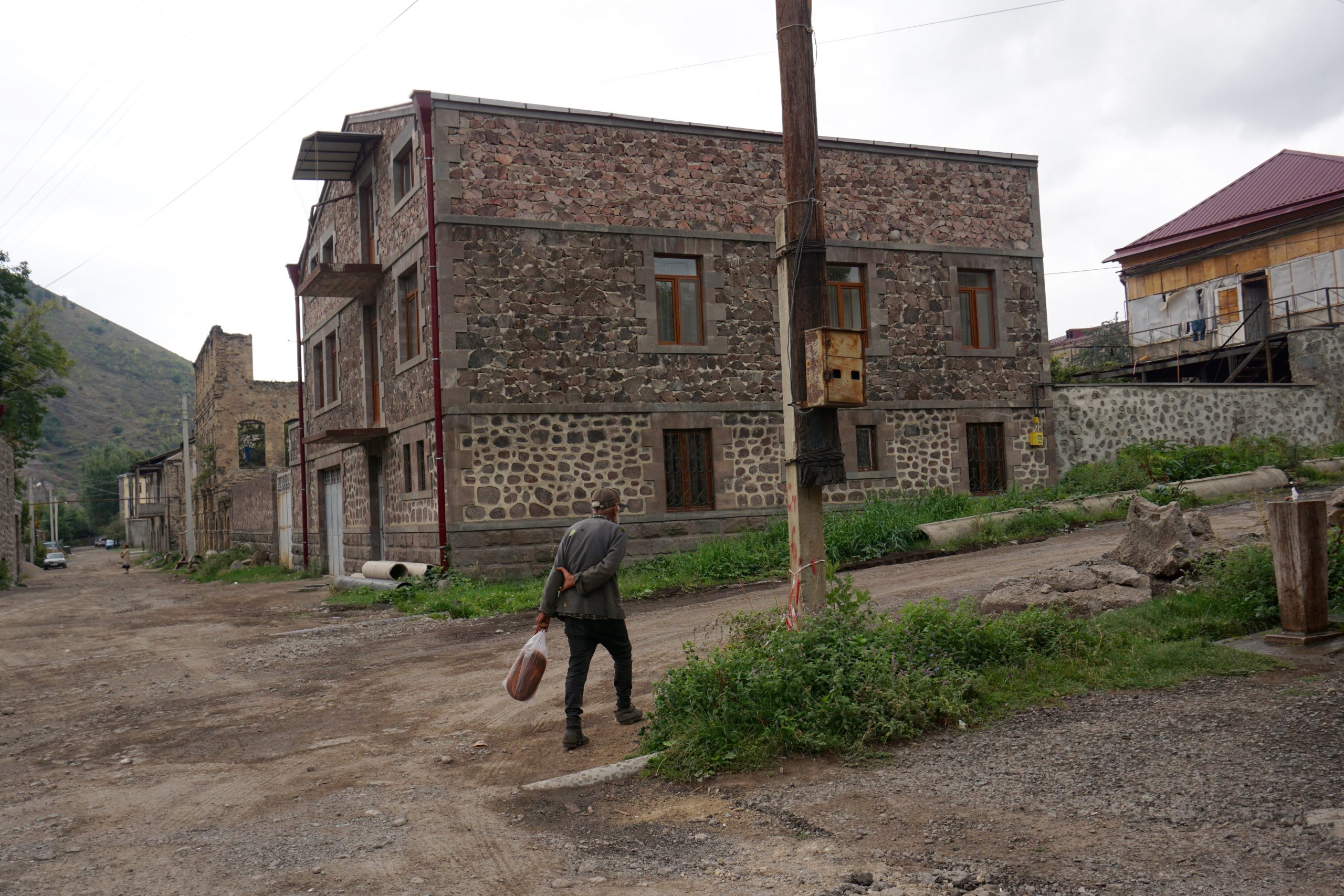 Shortly before the start, 2 dogs squatted in front of their house, ready to defend it against enemies, and suddenly the barking started as I approached. But the owners were nice, threw food from the balcony and the dogs forgot about defence and devoted themselves to the meal.

The starting point was at the cemetery. I delayed my start because I was so fascinated and jumped here and there at the graves to take pictures of the “best” ones. I had never seen that before, that the dead were “marked” on the stone! Here are two examples: 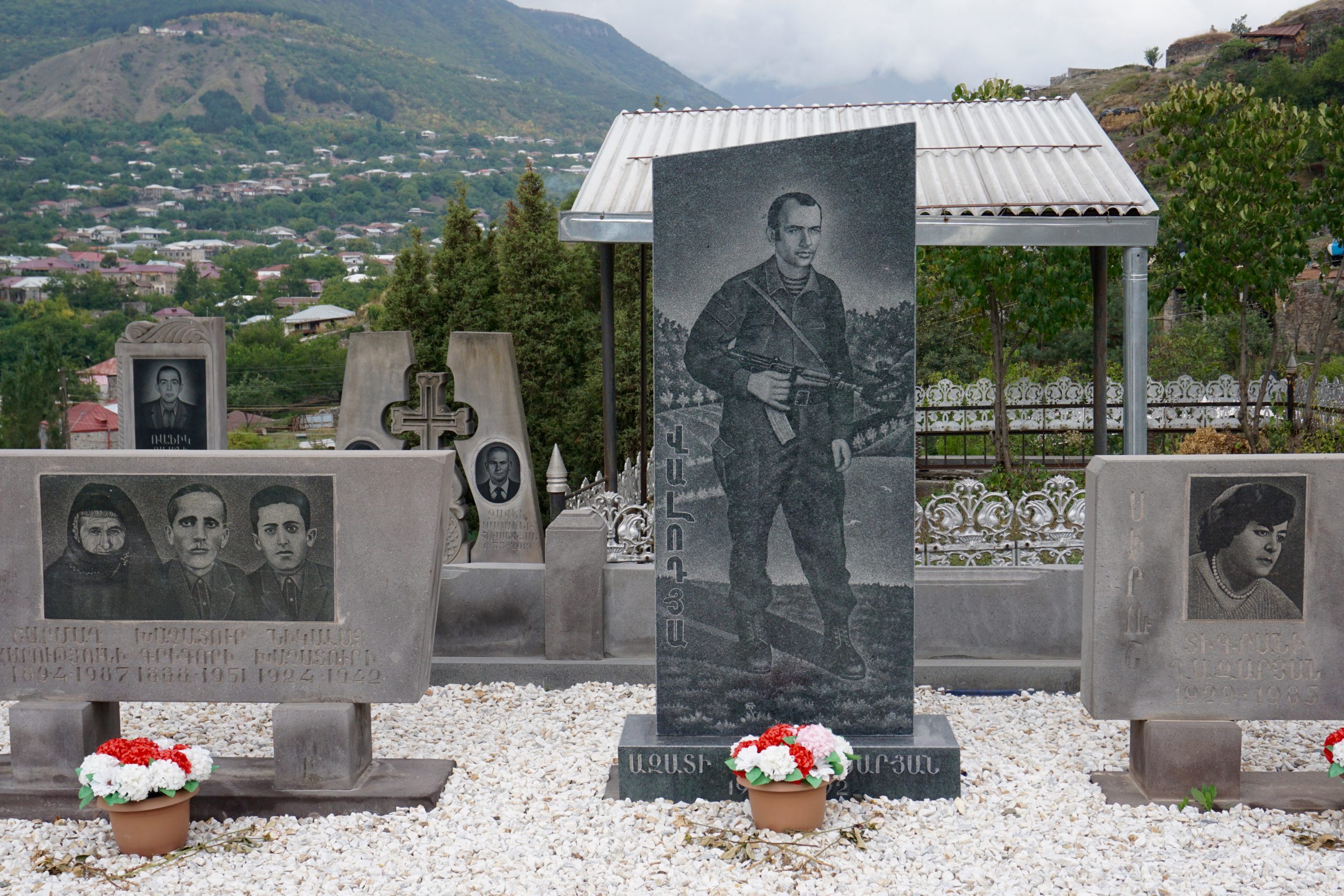 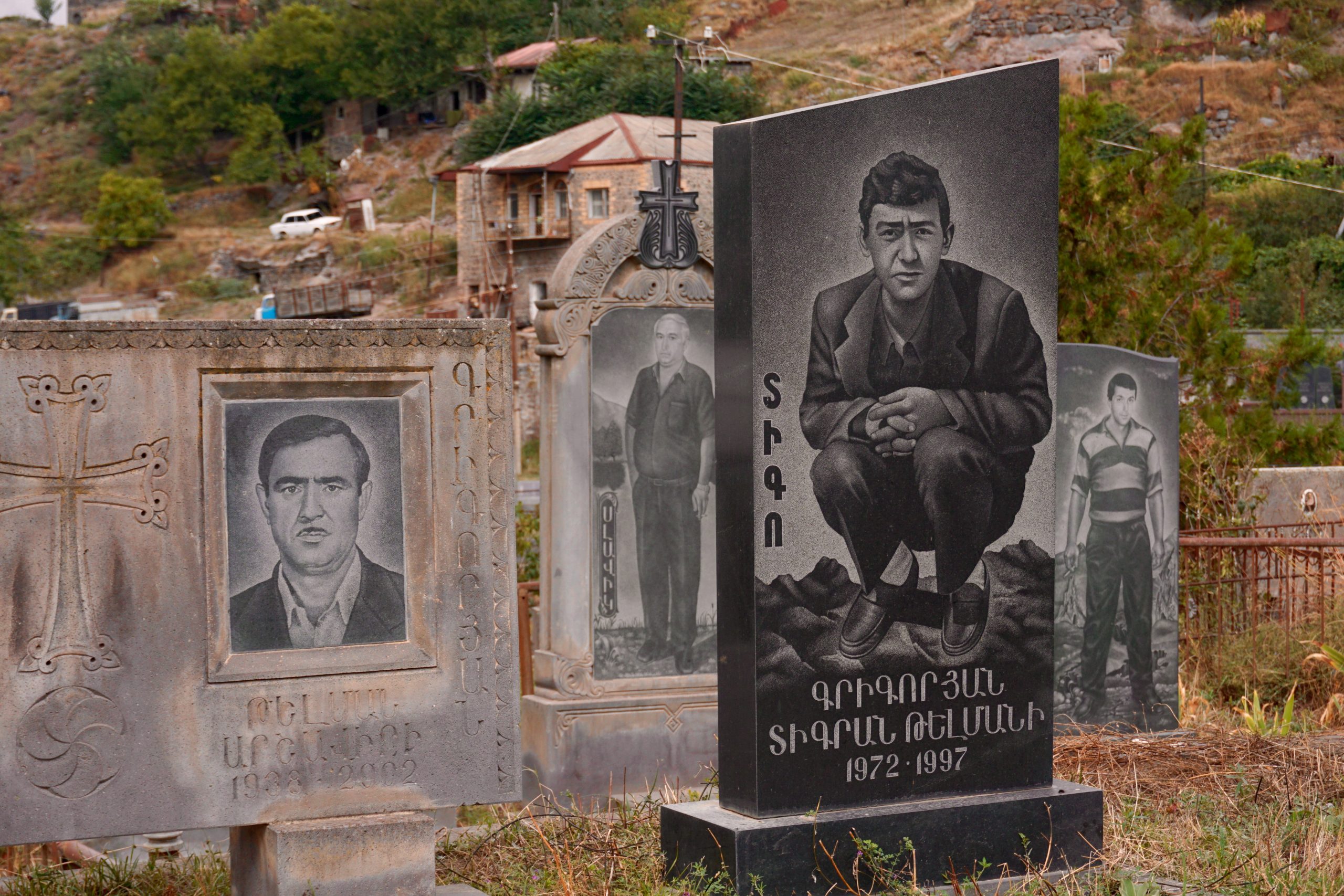 And then I entered the wonderful world of sandstones! There were the most amazing formations to discover! I hope I’m not boring you with my stone (snapping) enthusiasm. But I have to share some of the many pictures here! 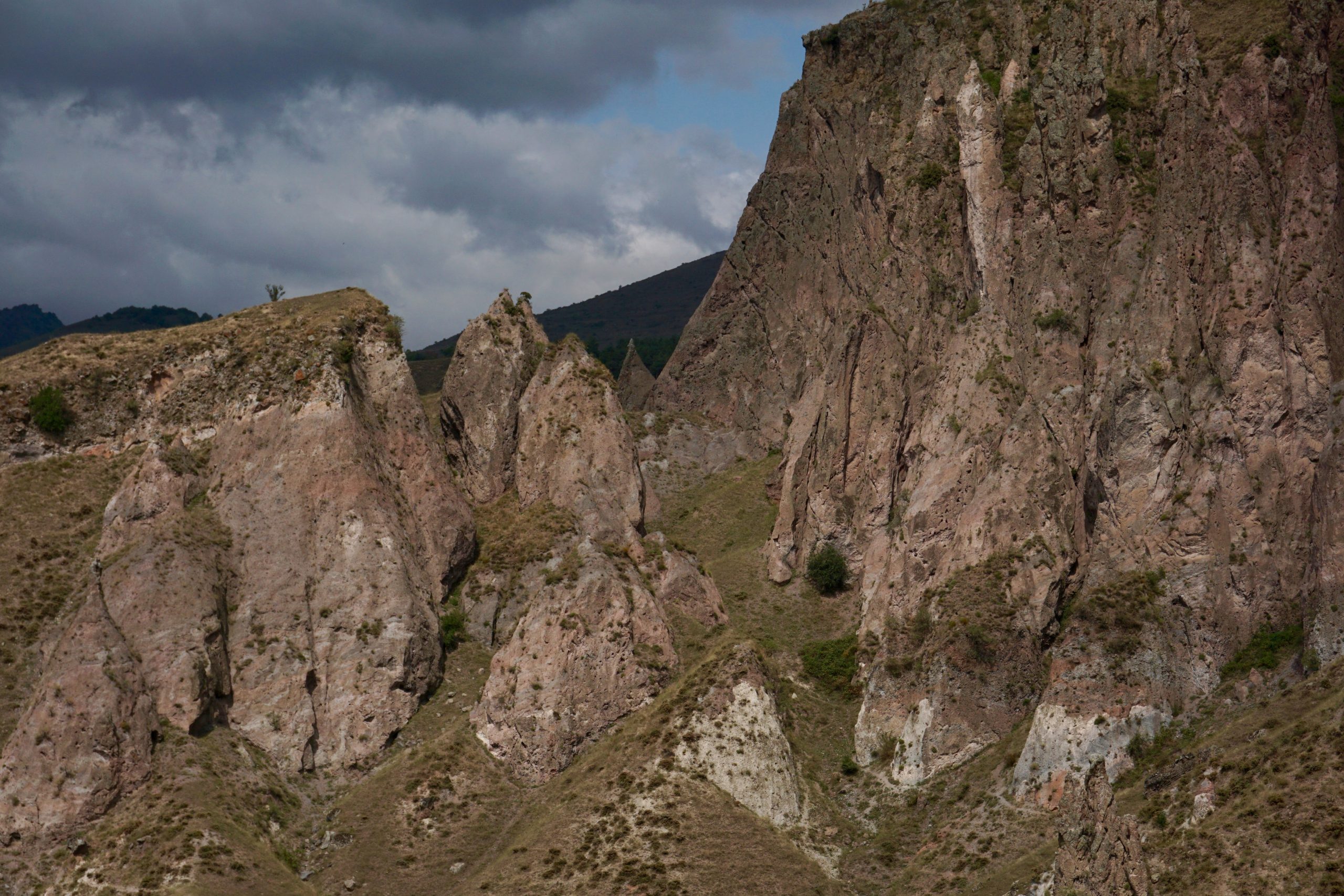 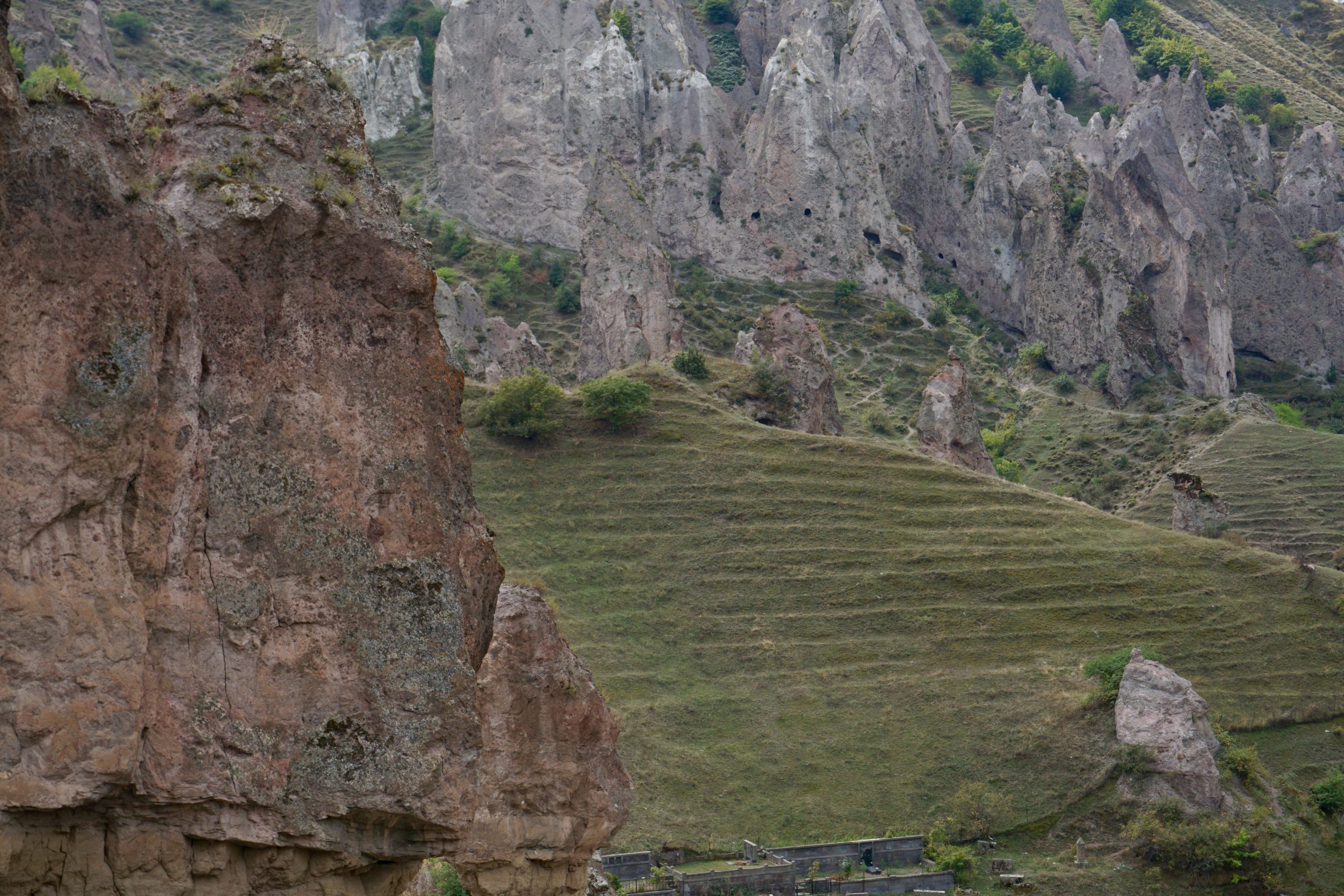 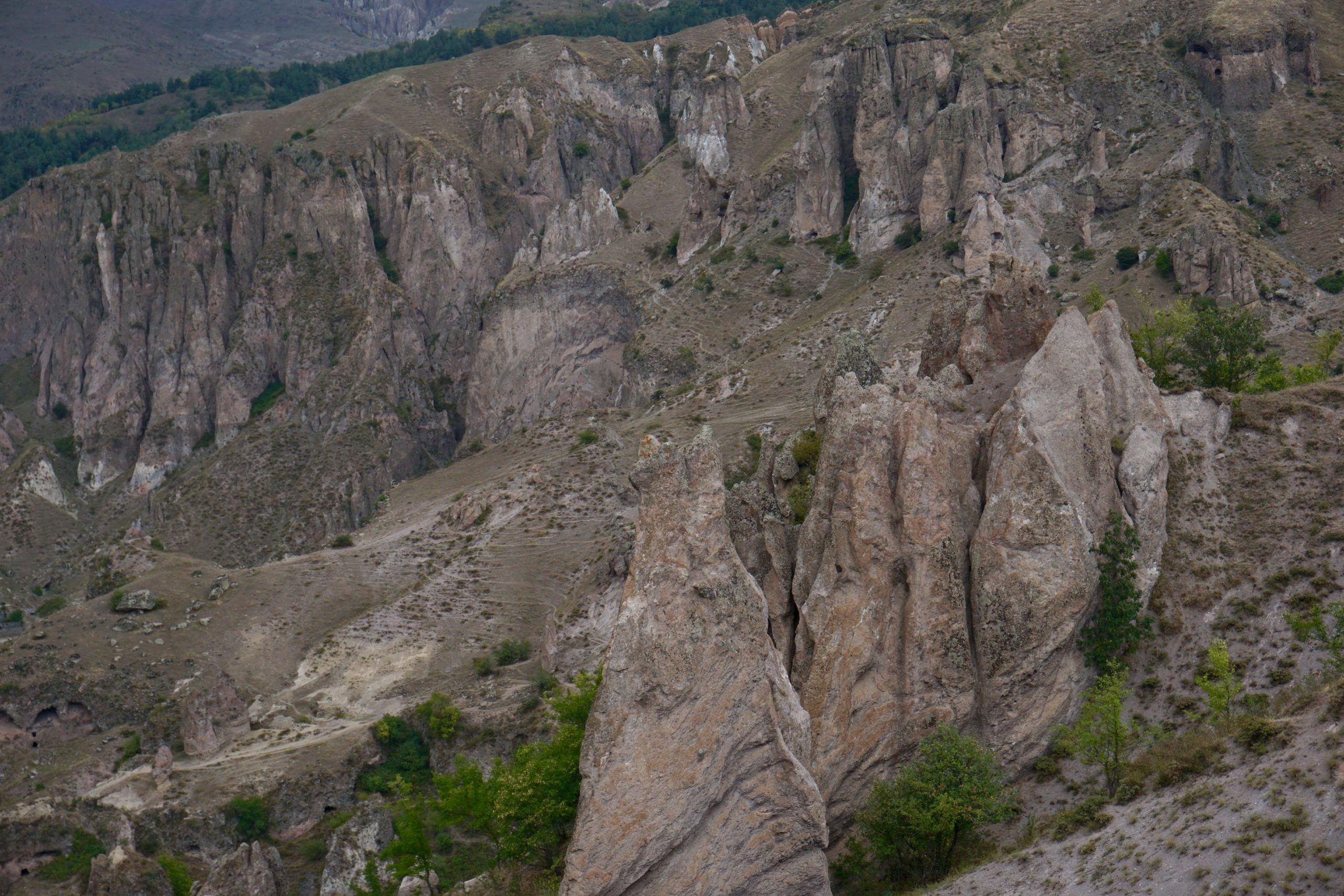 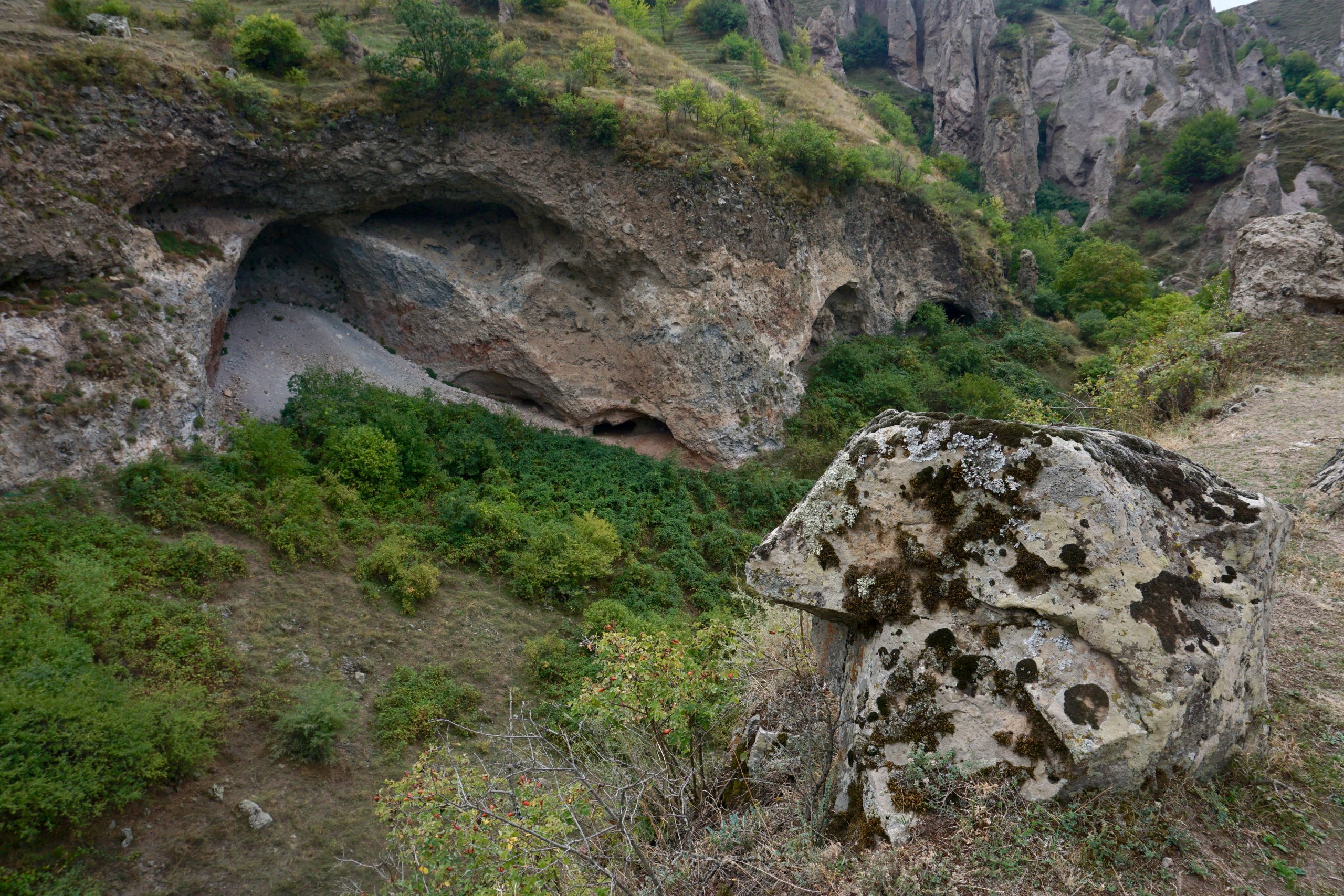 Here something with the city in the background: 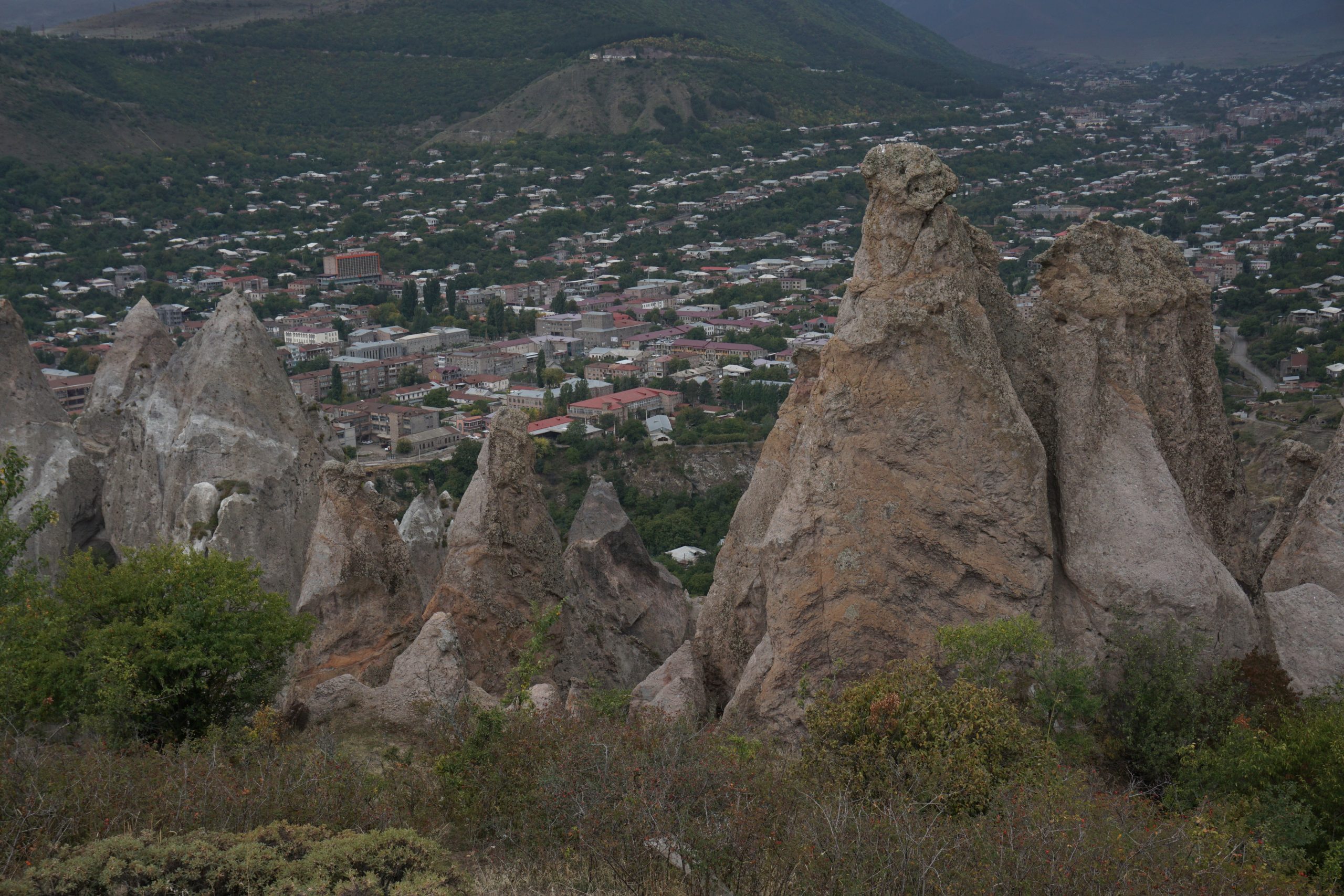 Mhm, I would have many more variations, but that would probably be too much. Or maybe something with a silhouette? 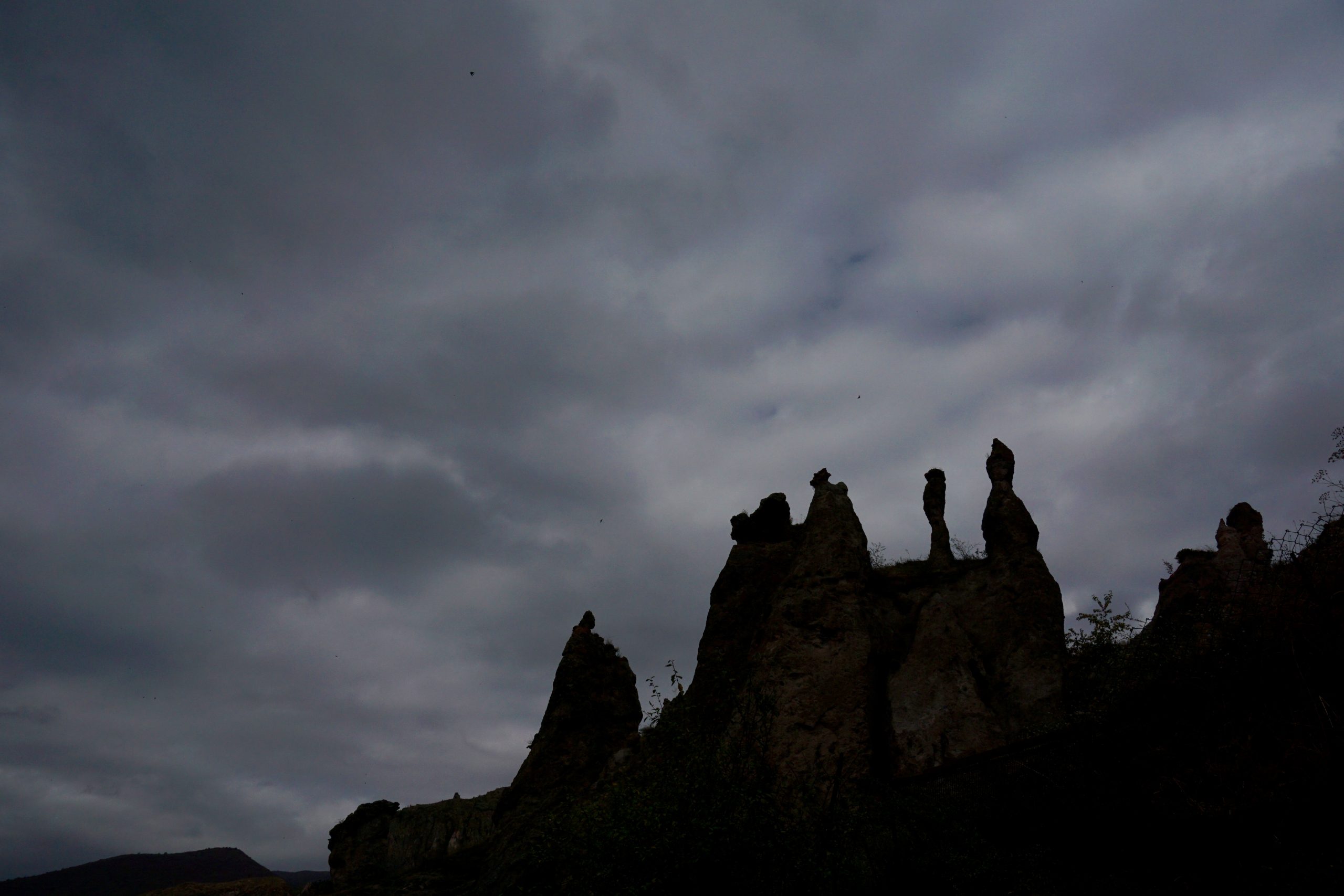 People continued to live in and near the stones until the 1960s. But then they probably found the other houses more comfortable.

Actually, the round tour should only take 1.5 hours, but with all my jumping back and forth, looking and taking pictures, it was already afternoon and I was hungry.