My last destination in Armenia was Gyumri. It is the second largest city in Armenia (170,000), just on the border with Turkey. It was built in 1837 by a fortress founded by Russians. It had many different names: Alexandropol, Leninakan and Kumajri – until the current name Gyumri was agreed upon.

The most formative event for the city seems to have been the earthquake in 1988. Much was destroyed and 25,000 people died. But there was a lot of international aid to help rebuild. Here is a monument to the earthquake victims: 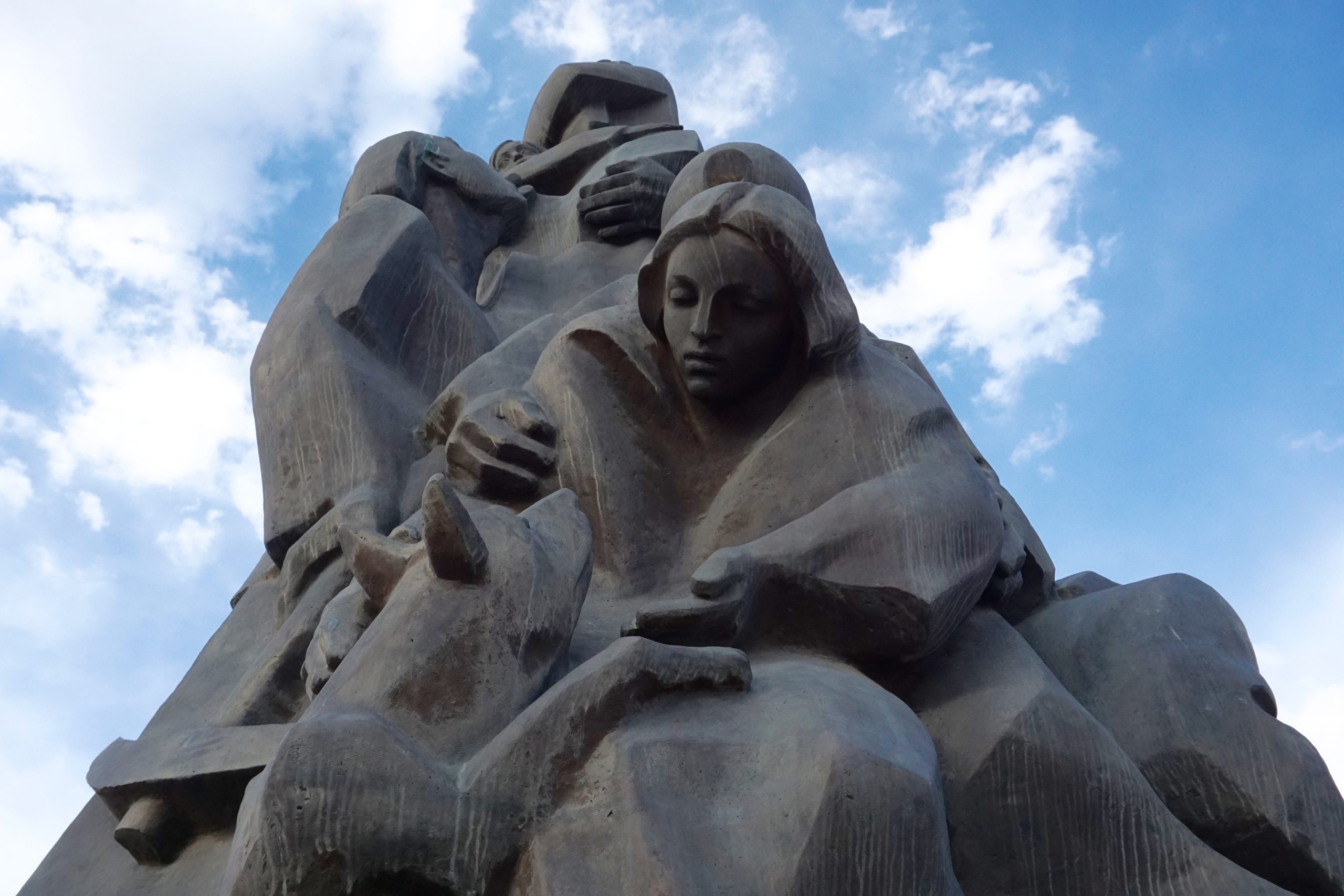 One particular central church has completely collapsed in the process, as you can see from the display board attached here: 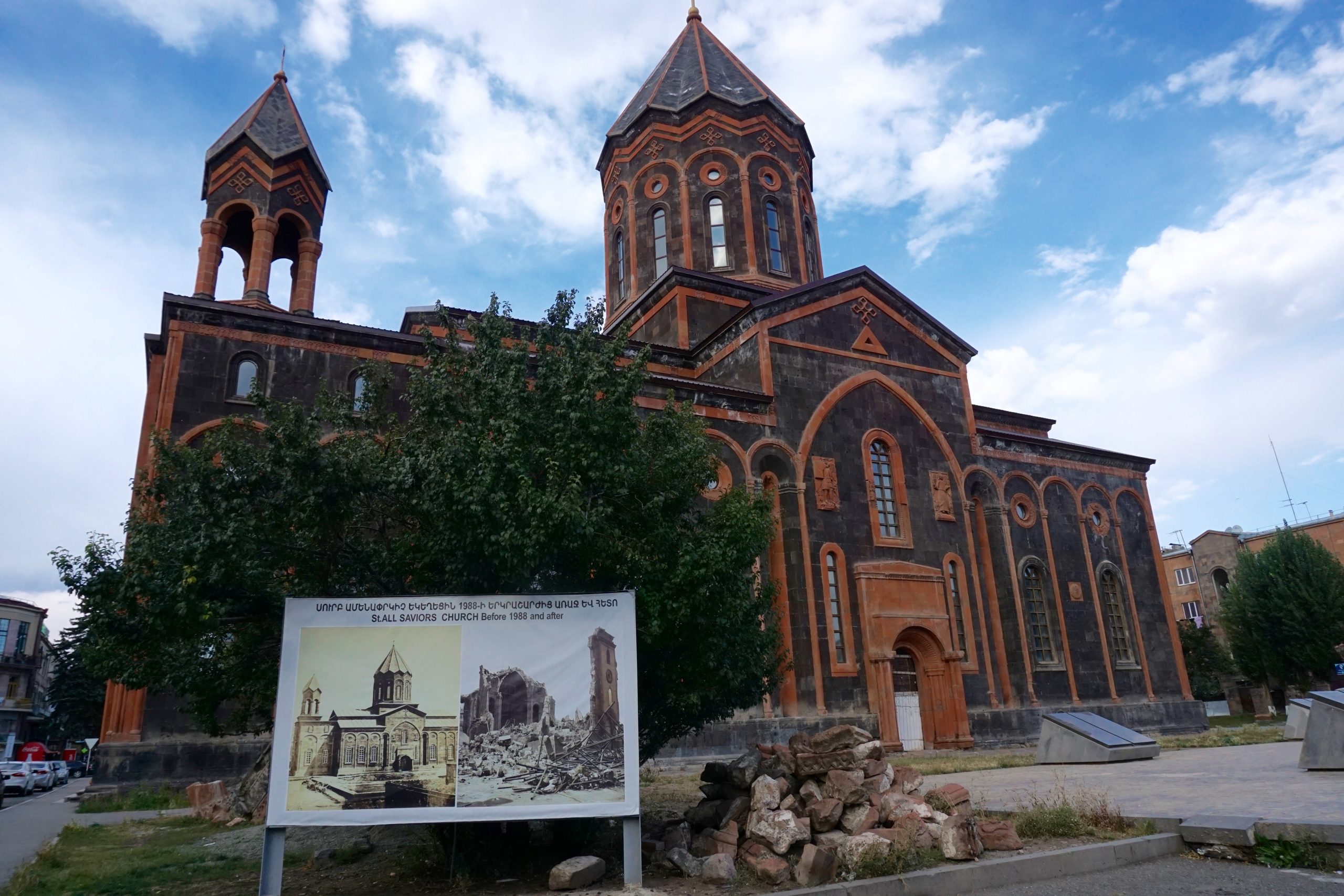 So the outside is already standing, the inside is still being worked on. An old roof spire has been kept 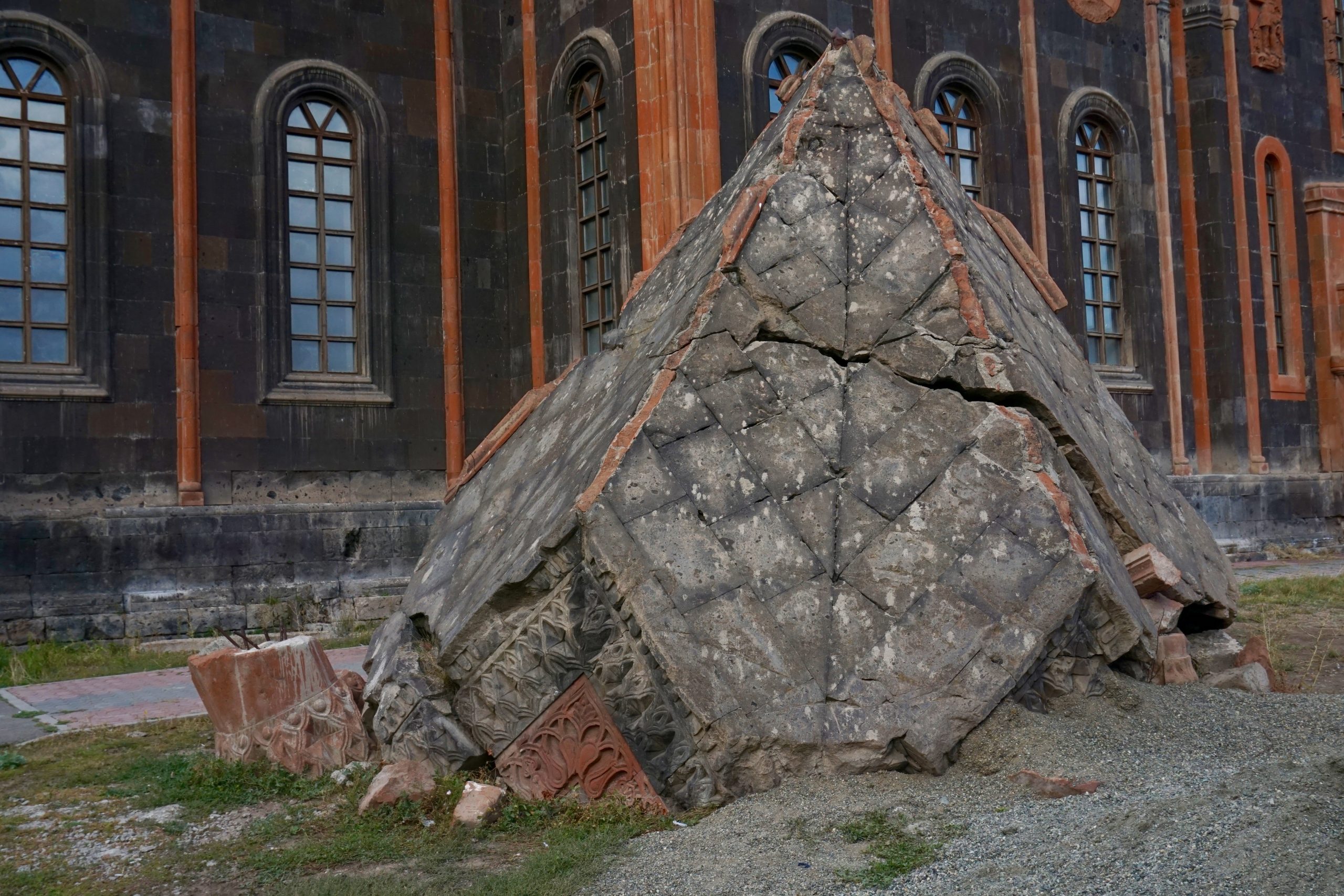 You can see a bit here how the city got its adjective – it is also called the “black city”. But not because of its sad past, but because of the black tuff rock that is used a lot for building. This can look a bit sad, especially in bad weather. 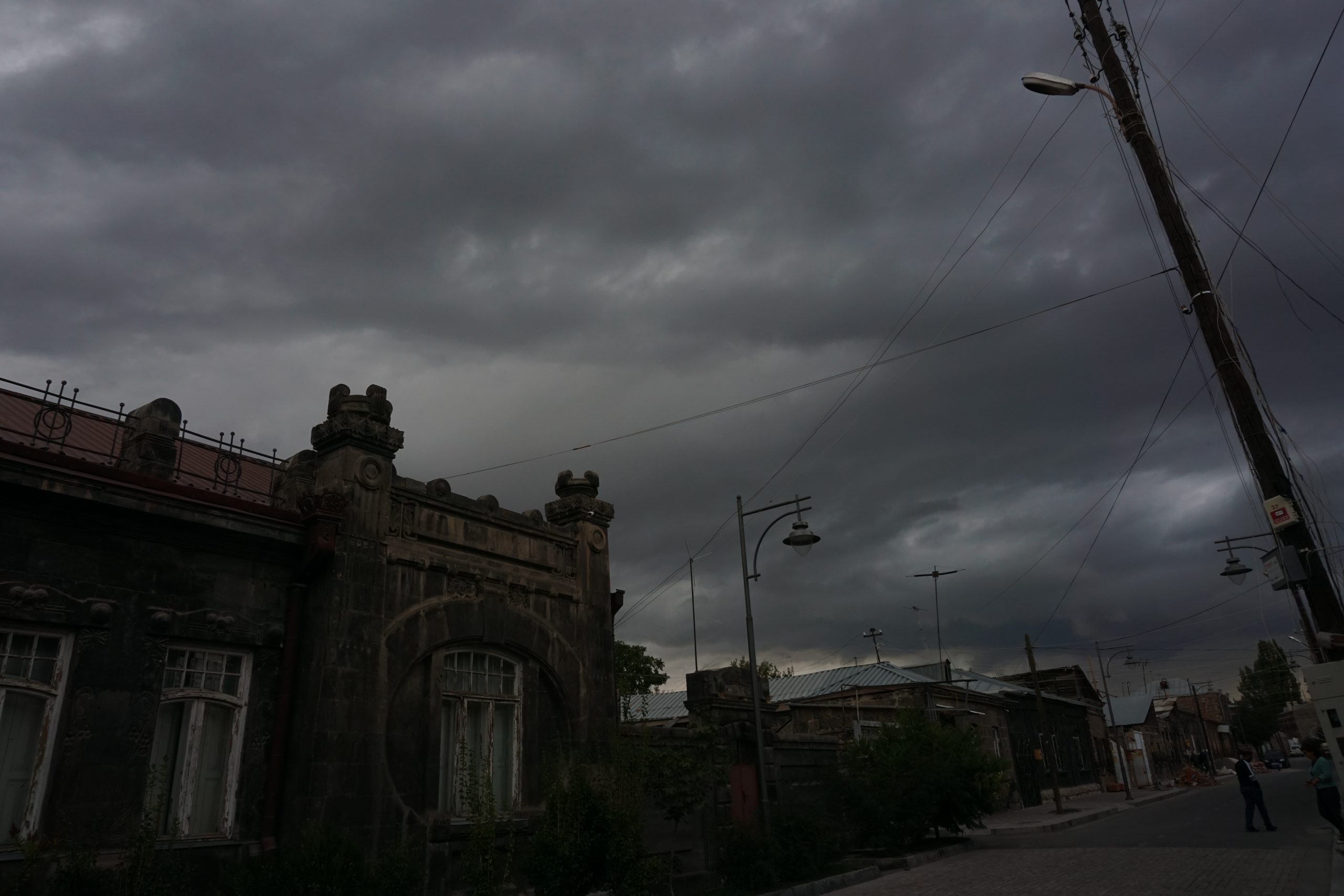 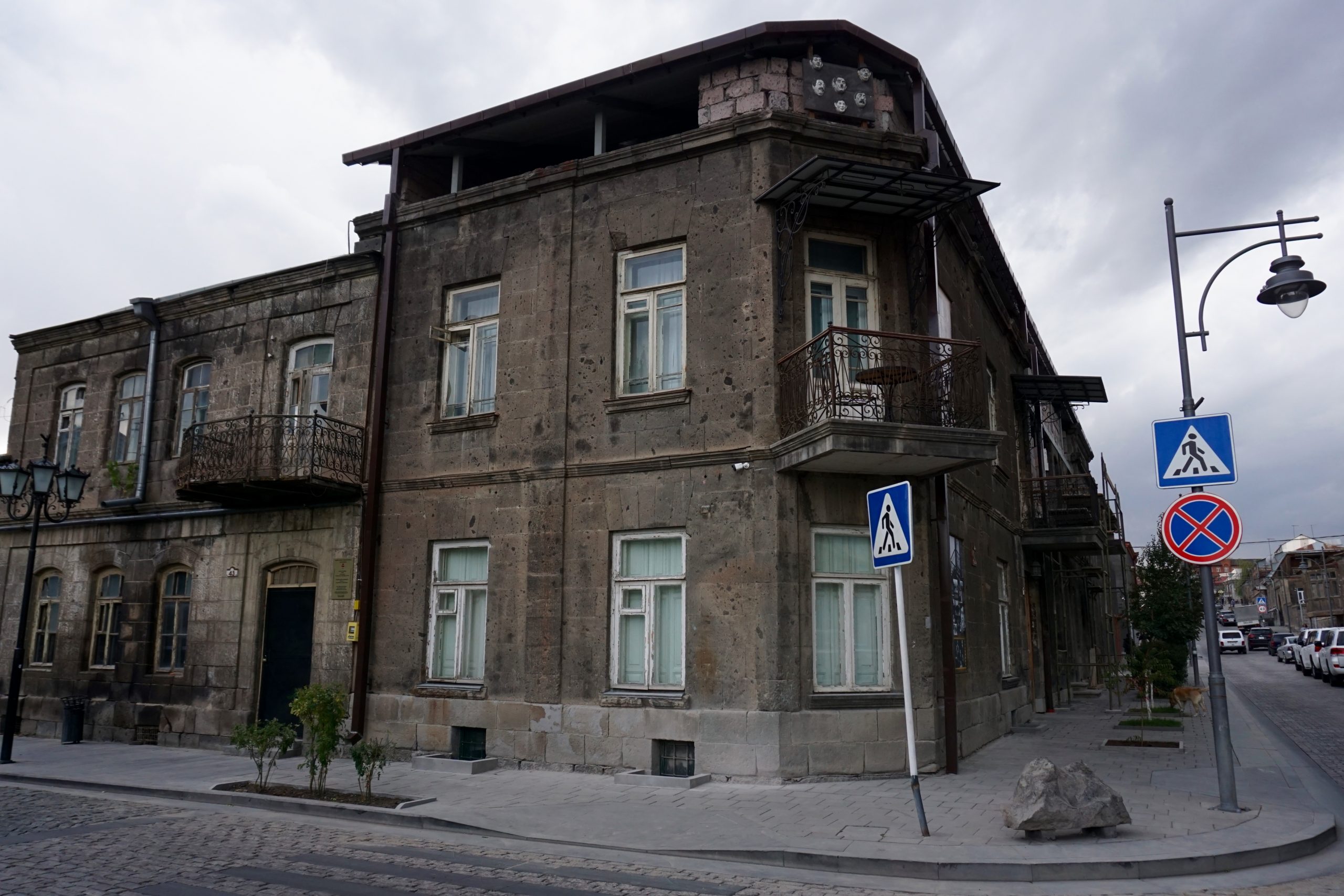 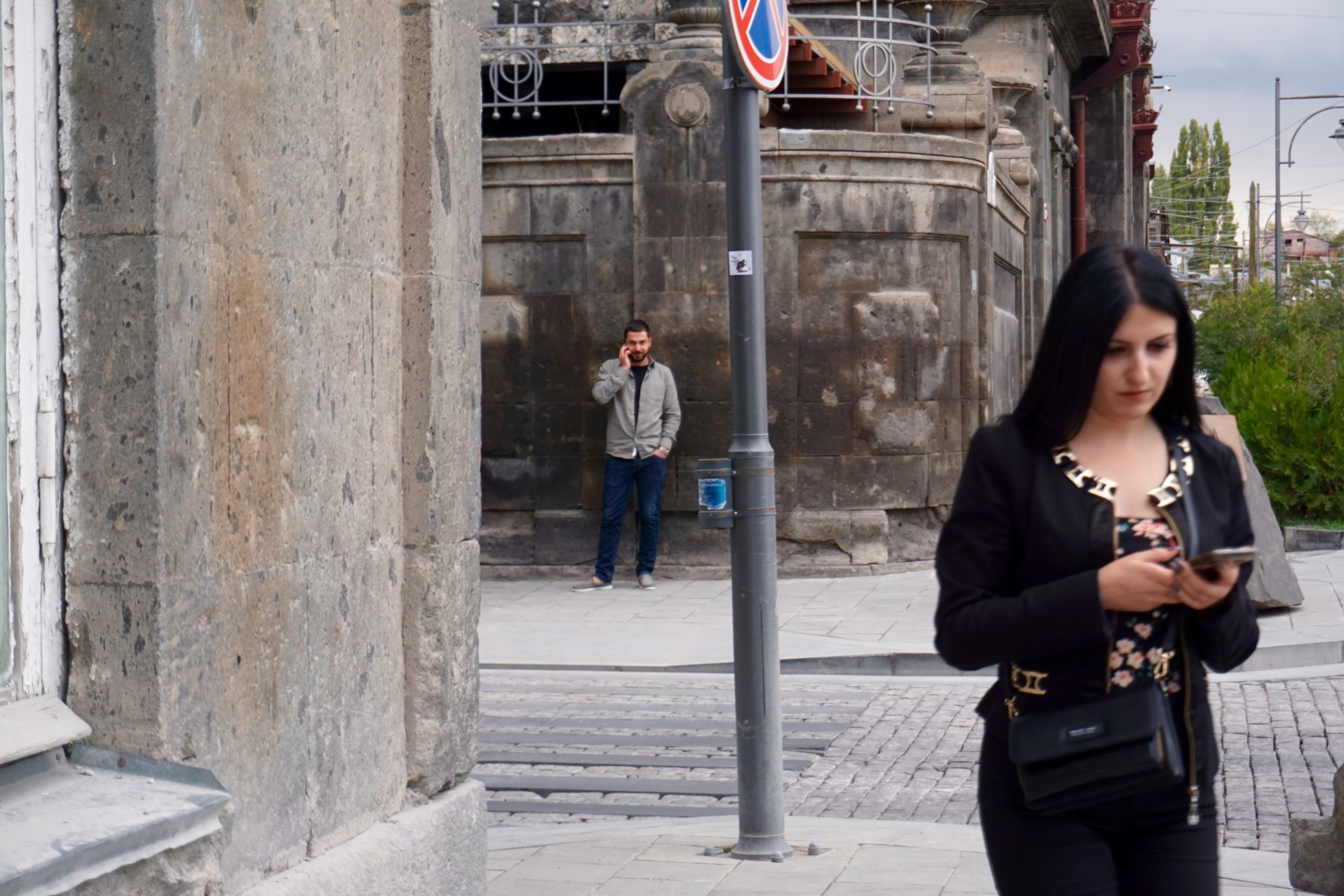 But actually Gyumri seems rather cheerful. IT is an economic sector that Armenia is counting on. There are dreams of an Ararat Valley (as a competitor to Silicon Valley) and a lot is being done in Gyumri, as well as in Yerevan. So you see a lot of young people here, there are many cafes and shops and art on the wall. Here are a few visual impressions: 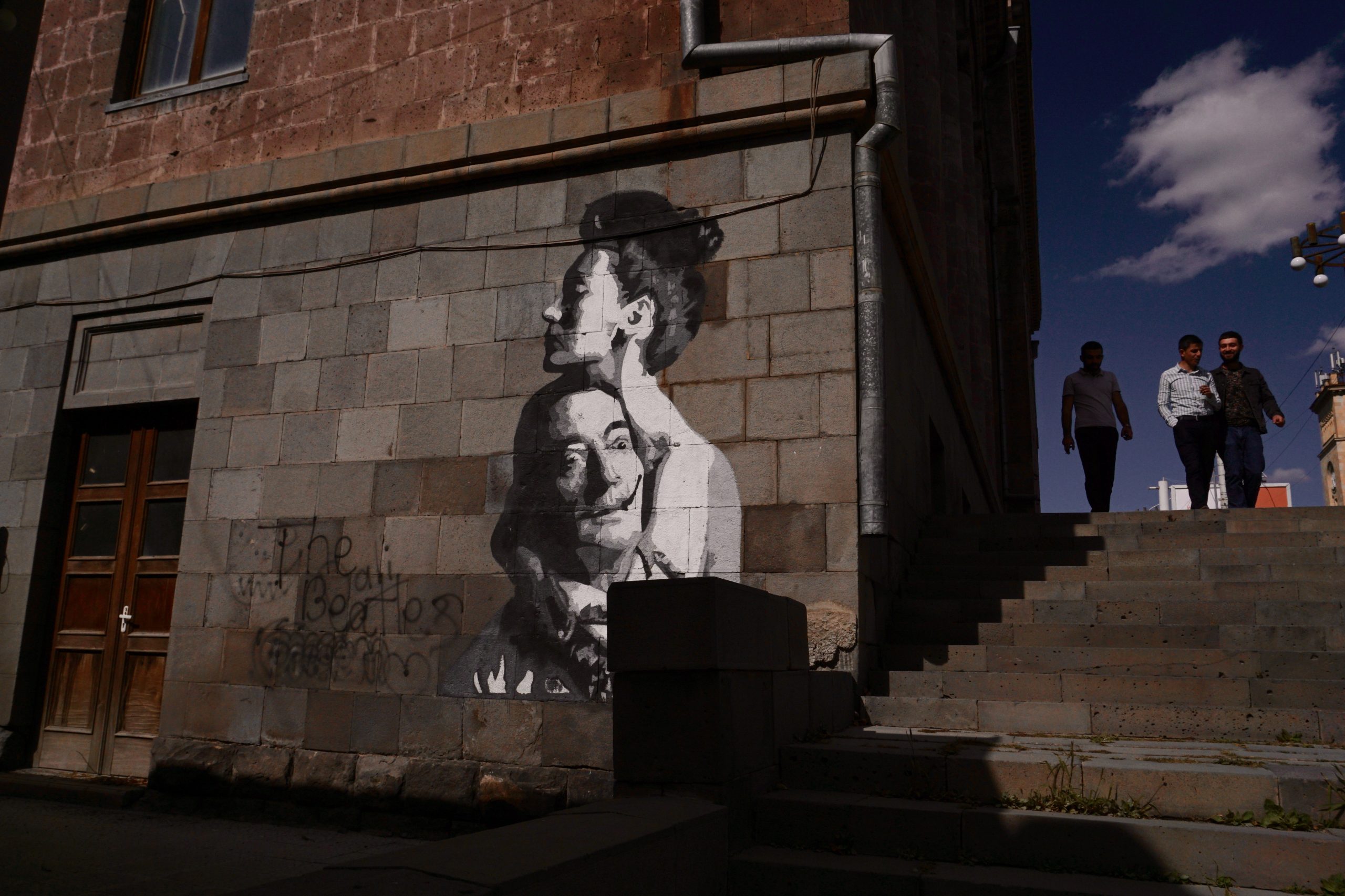 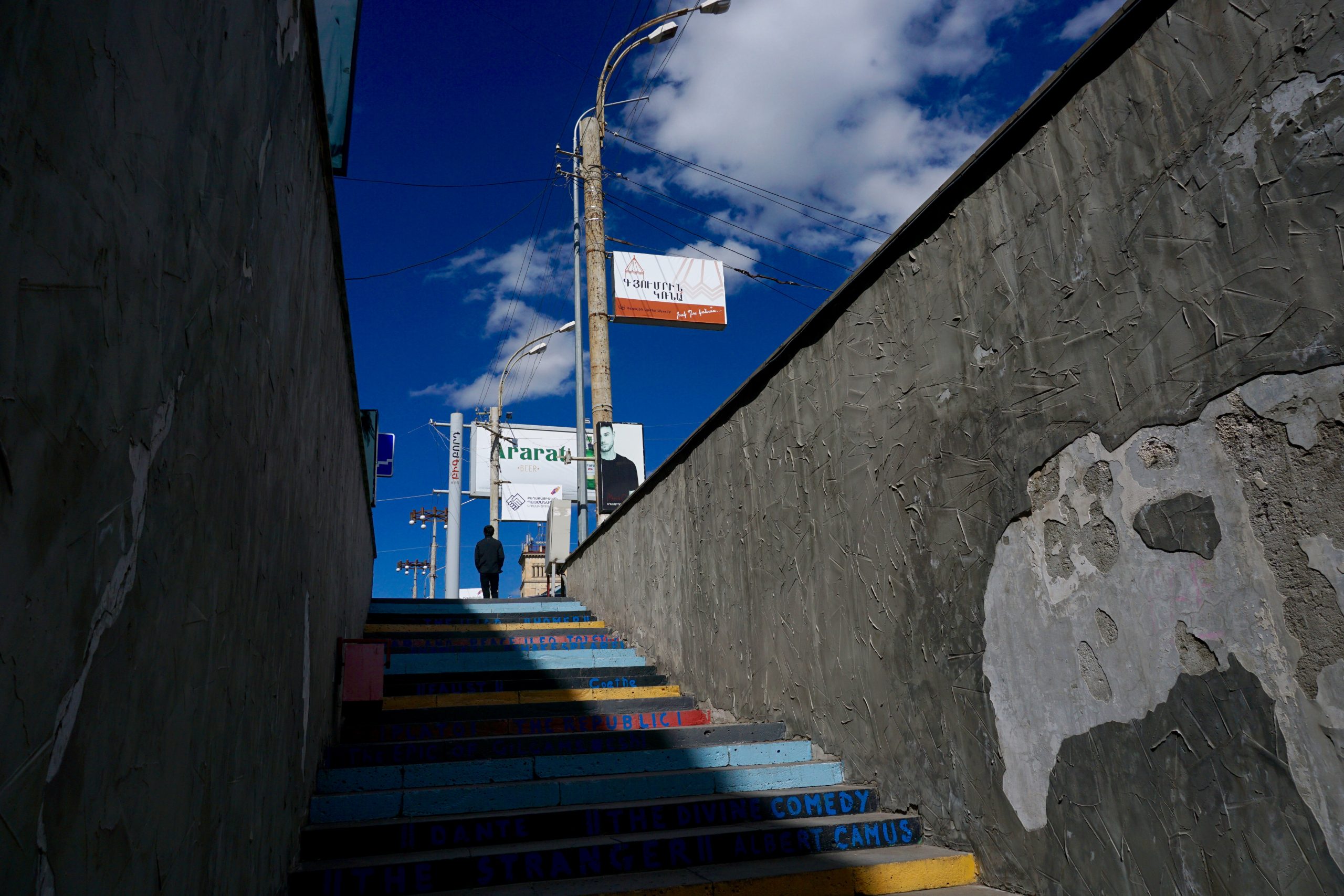 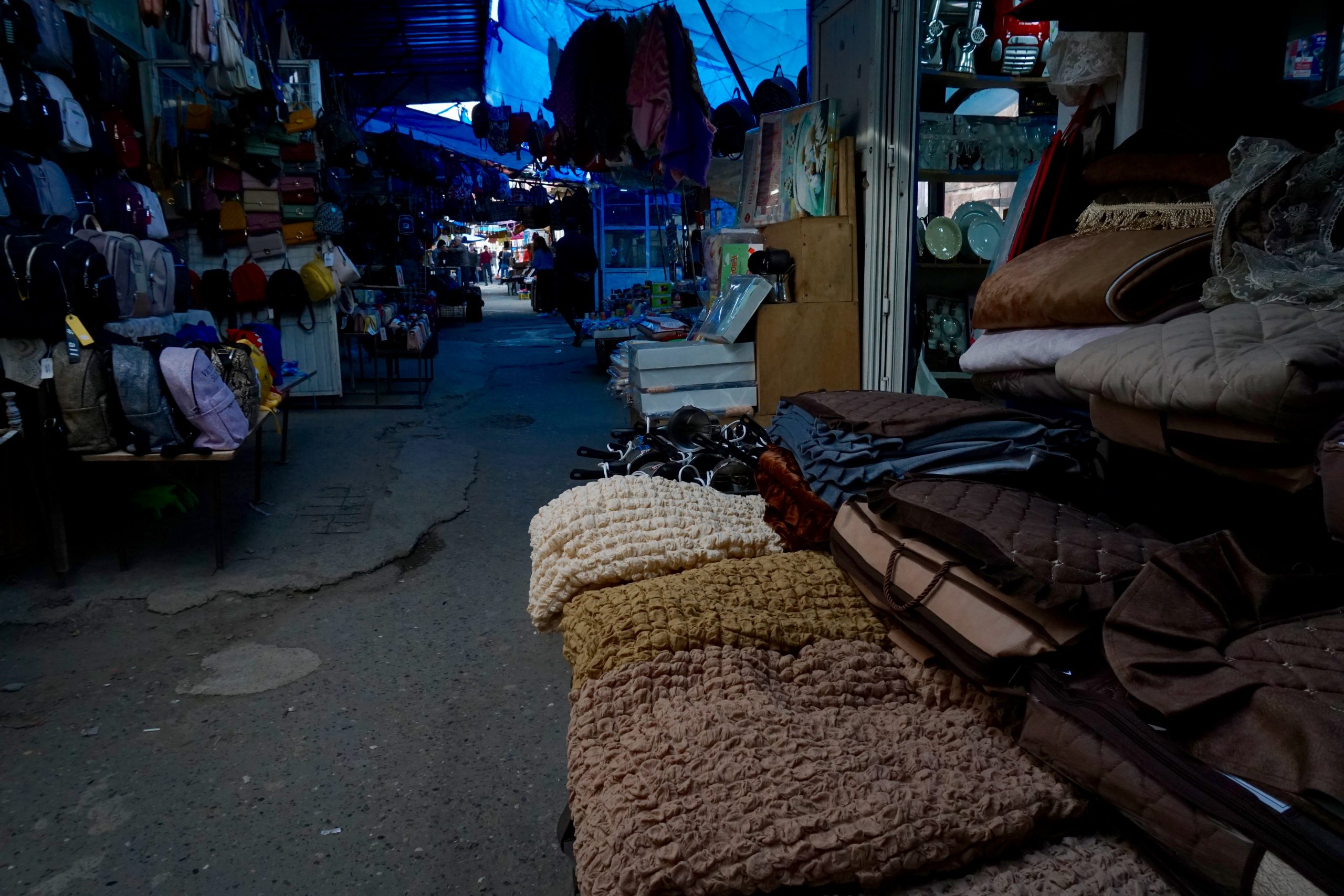 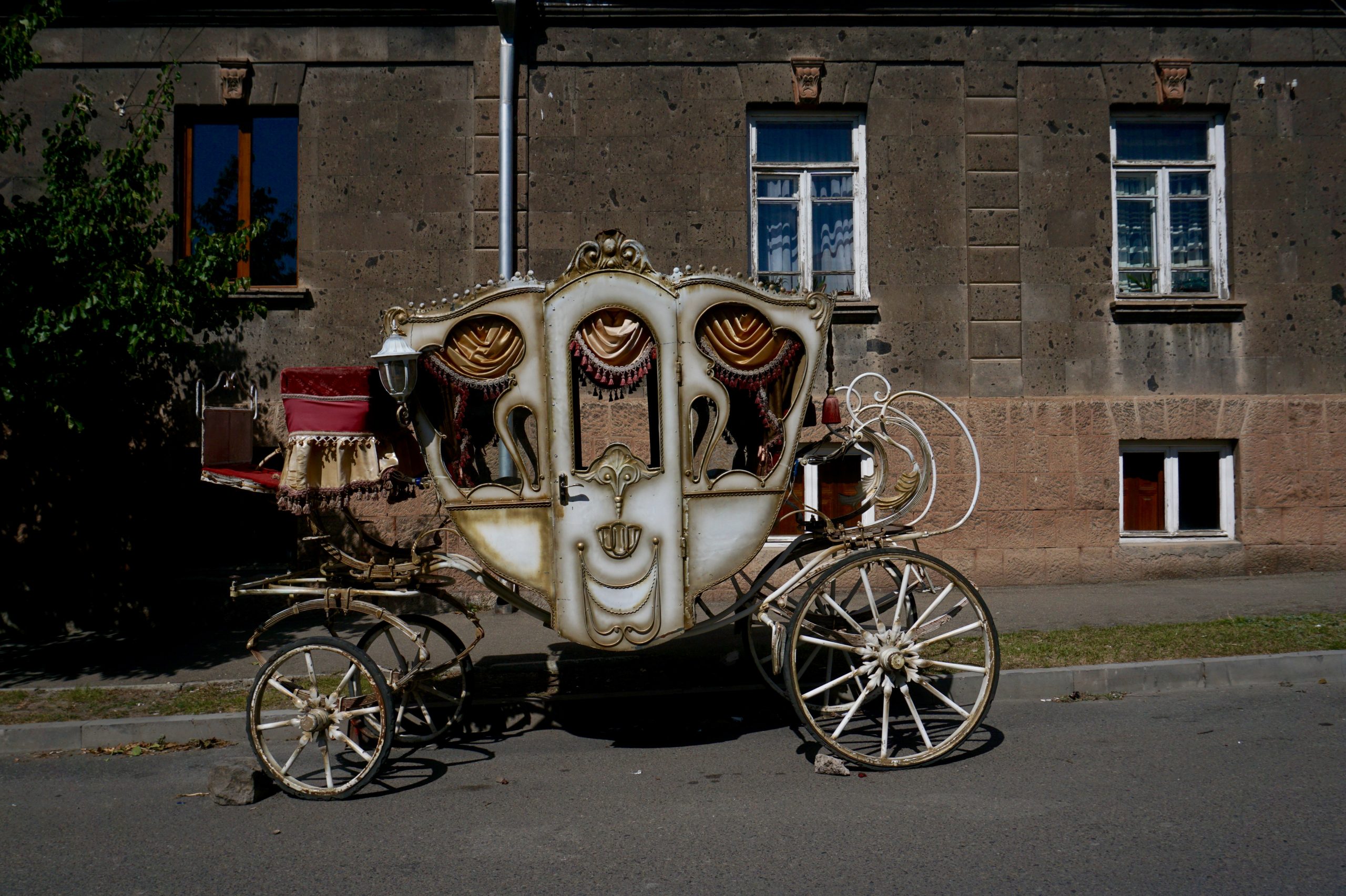 For weddings? for tourists? for deco? 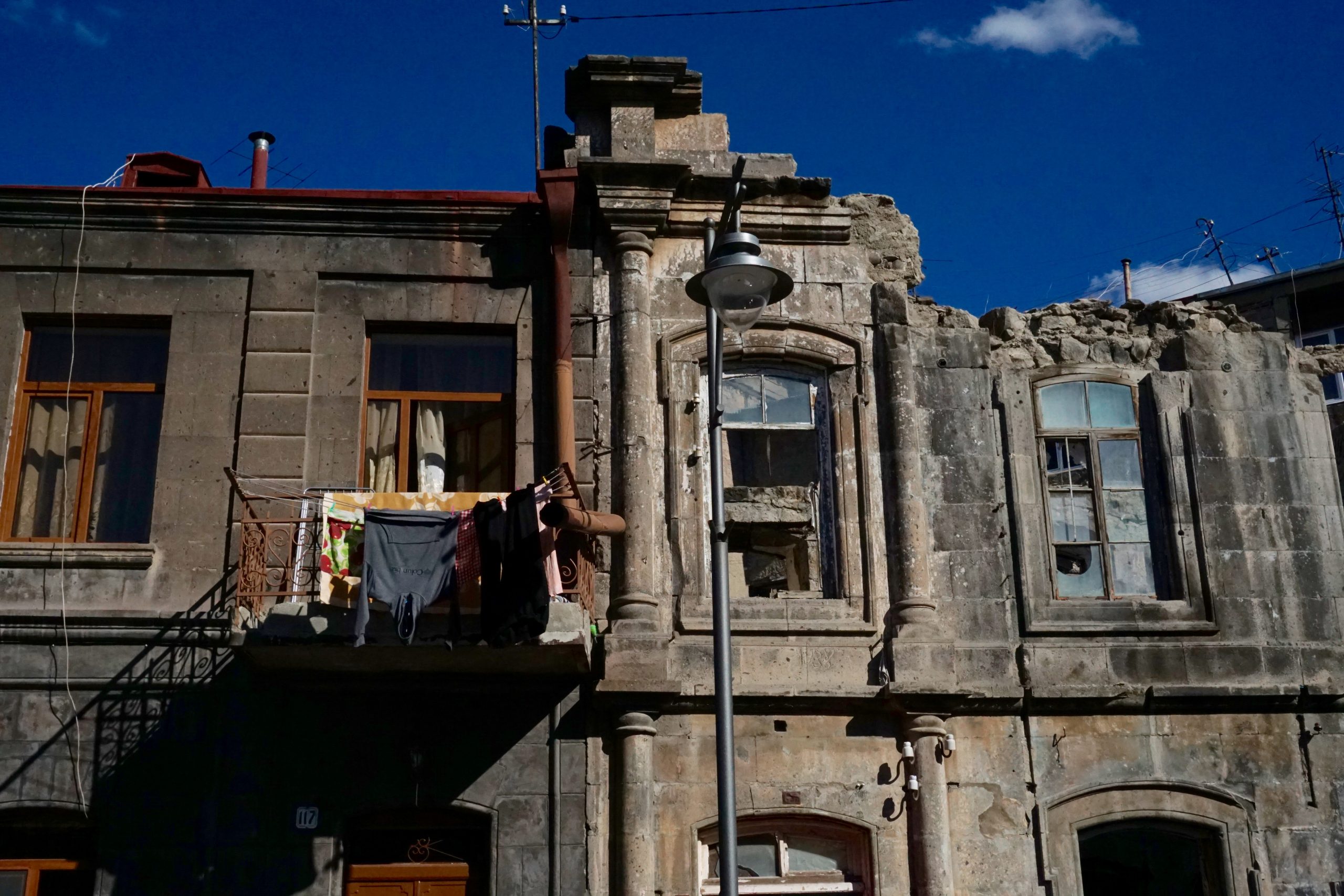 finished and in progress 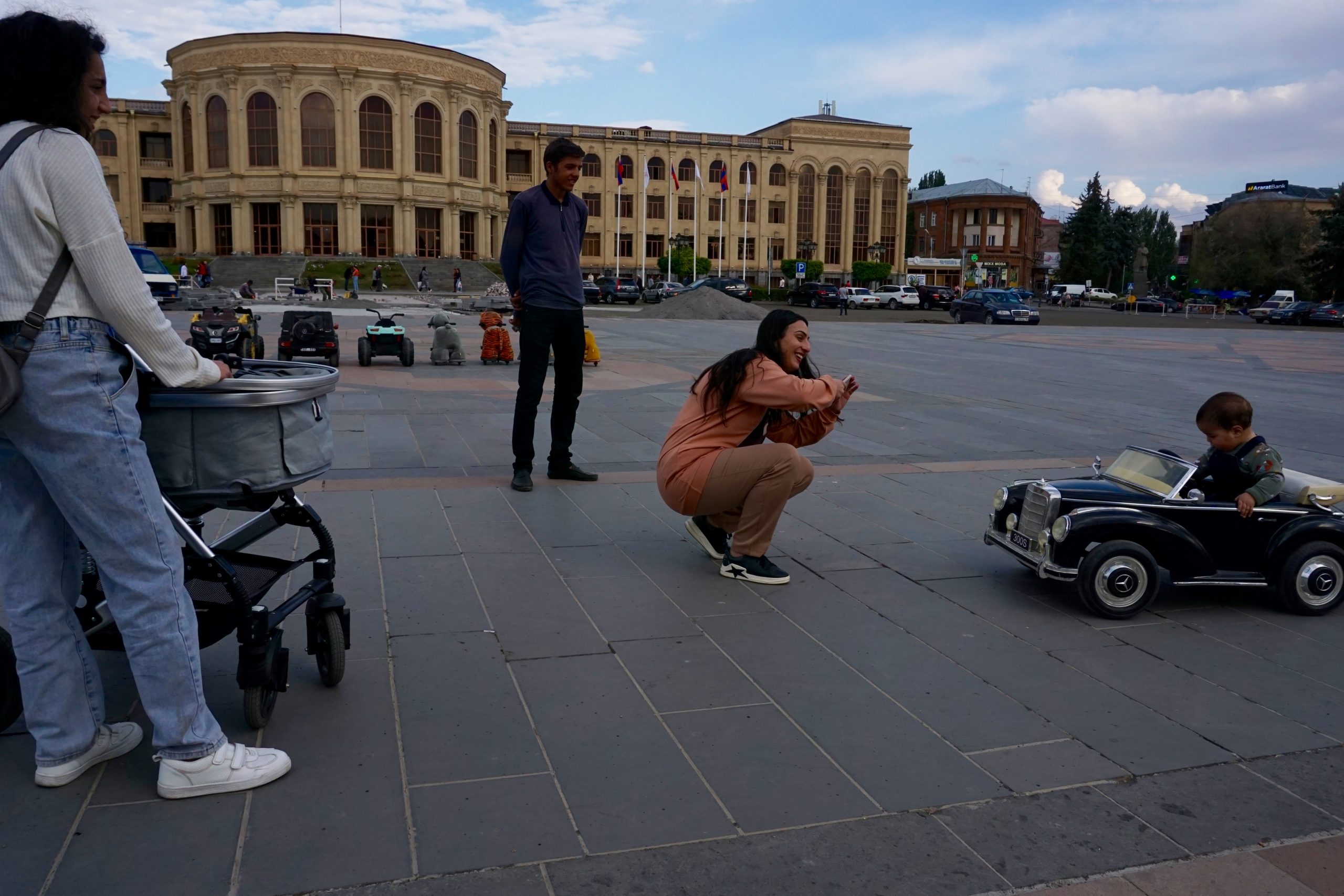 There is also a large square here. But what was actually most remarkable was that I had a conversation with another traveller, a Czech. I had come to Gyumri with the taxi driver whose son was in the war and had seen the war graves and felt sad about Armenia. It is good to discuss impressions with someone else from the outside. We were simply sat down together for breakfast by our extremely hospitable hotel owner. I am very grateful to him for that – the man has a very good sense for guests anyway. And because I couldn’t sleep much during the night because of all the thoughts about war and Armenia and humanity in general, I “attacked” him with this topic right away. Would he feel the same way? He thought about it a bit and said, “I may be a bit numb for that as I have seen on my travels so much of war-relicts”. He likes to travel in Eastern countries and there it is simply a reality much more often than in our peaceful Central Europe (except of course for all the small wars between people). It was a very pleasant exchange about travelling, other countries, experiences etc. Everything is always so close together – the sorrow, the joys, the loneliness, the contact, the cruelty and brutality as well as the warm human togetherness. We both sat together for longer than we wanted/thought. But then he really had to travel on. He has a great joy in architecture, even sacred architecture. And I had a great joy in meeting a suitable person just when I needed it.