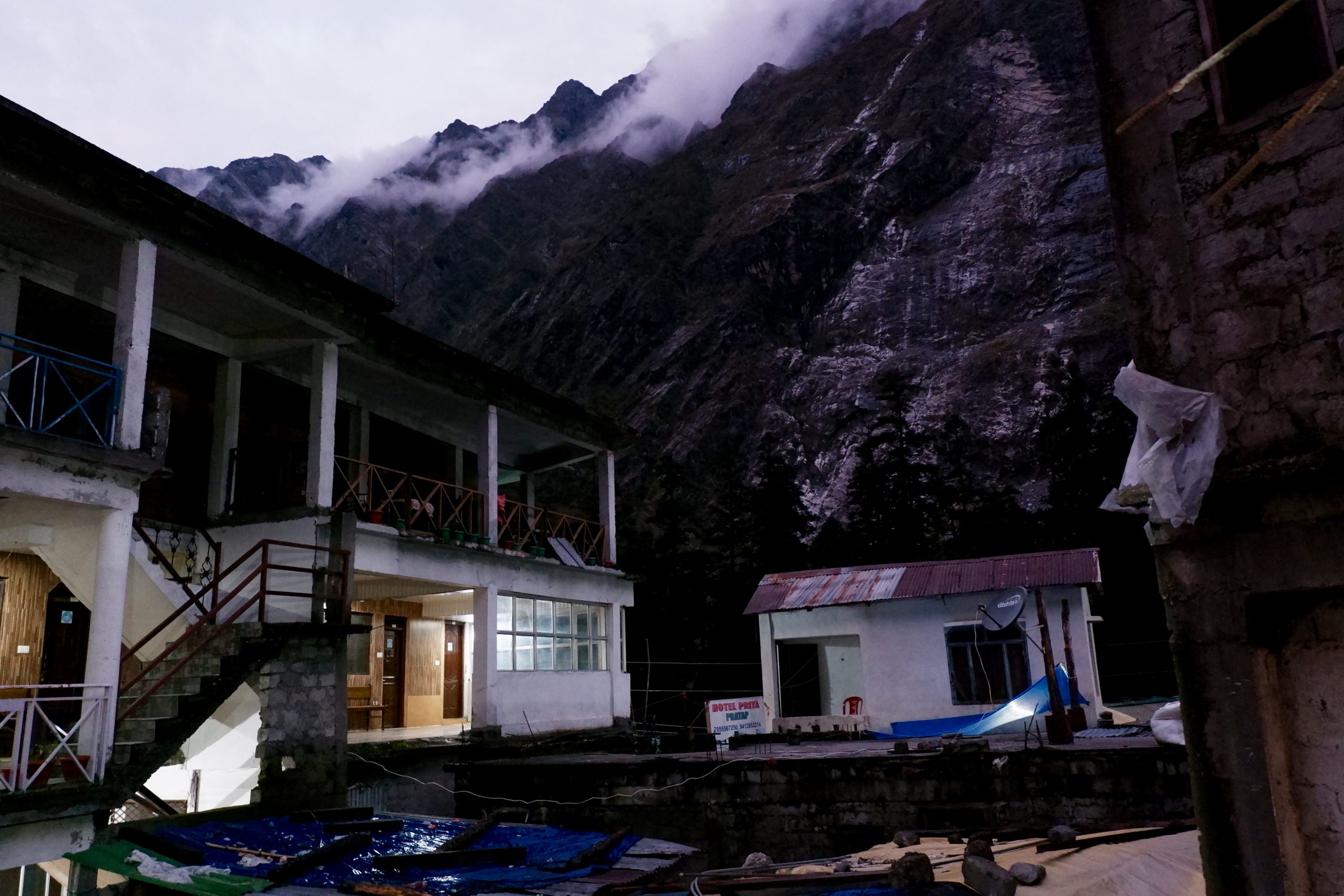 One of the climbers said he was here for the second time and would definitely get up at 4:00 for the big climb. That seemed a bit excessive, so we set the alarm for 5:00 and set off around 6:00. 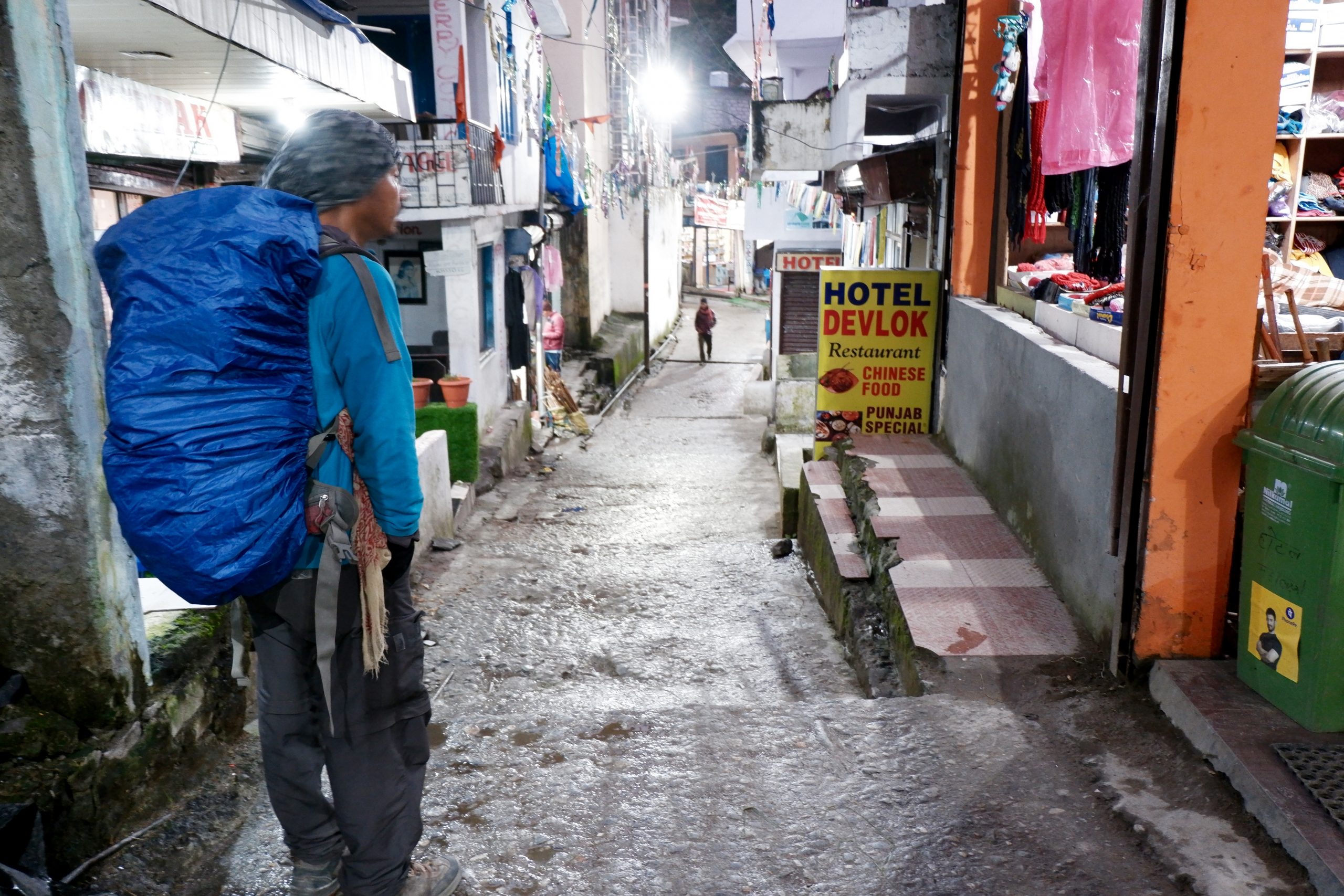 Binodh said that if you want it to be a nice/sweet day, you have to start it sweetly and so we stopped for sugared milk tea with biscuits.

I was very lucky anyway that we agreed on only one backpack for the day, because we were returning to the accommodation – and Binodh carried it (it looks heavier than it was, it was mainly warm and rain gear). 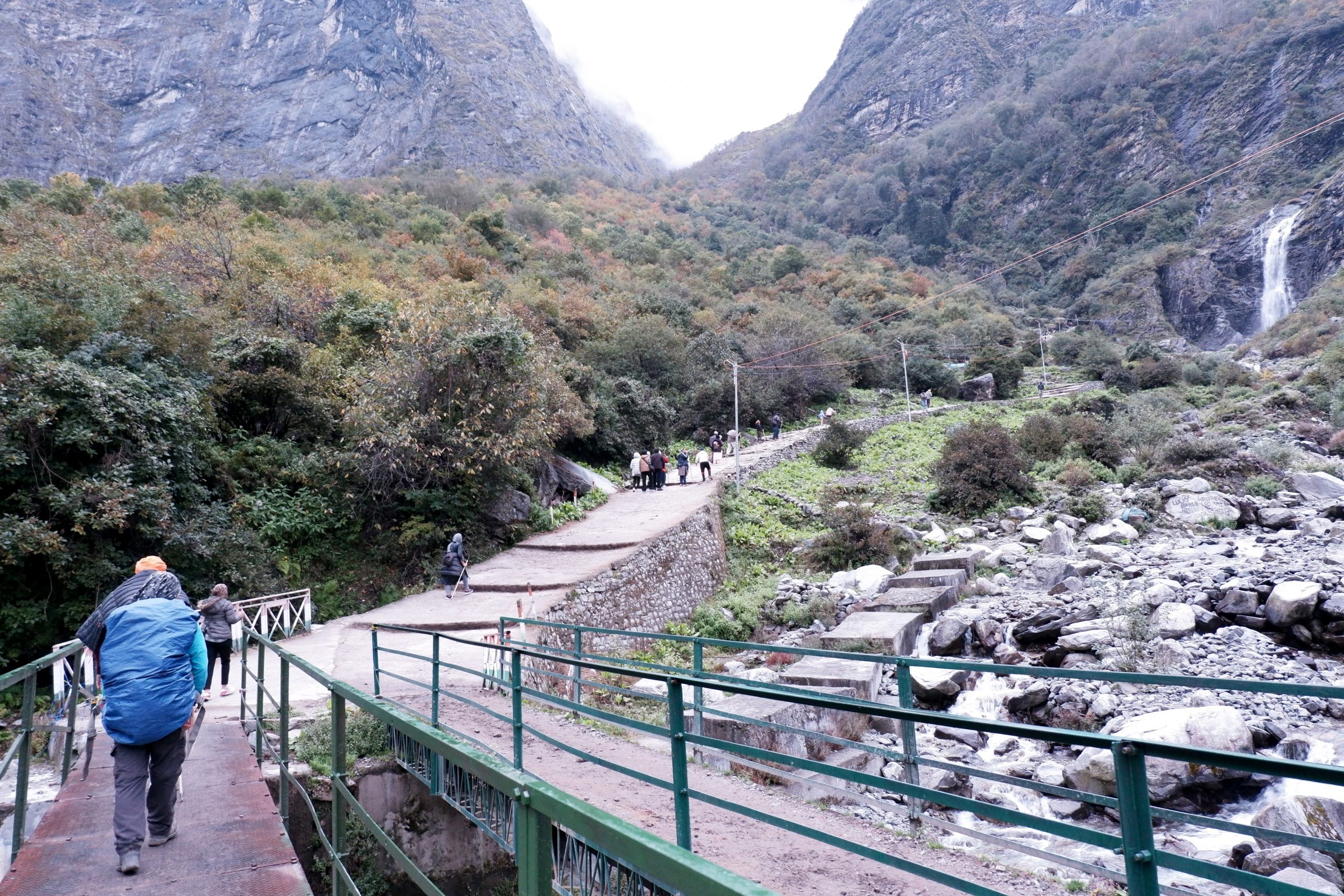 out of the village 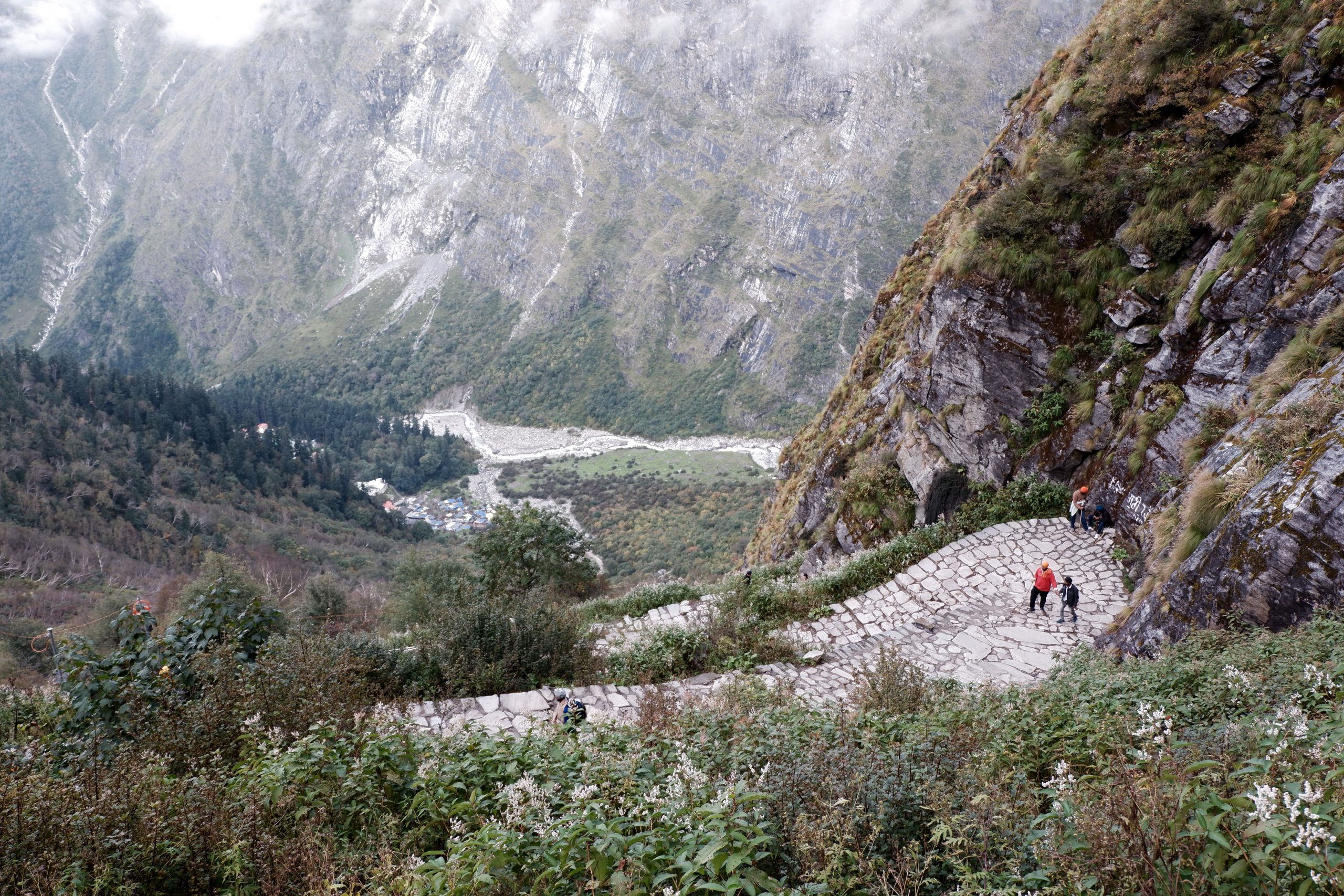 The path simply spiralled upwards, curve by curve. At first the weather was mixed with clouds with windows and sometimes hopeful blue skies, but then it closed in again. 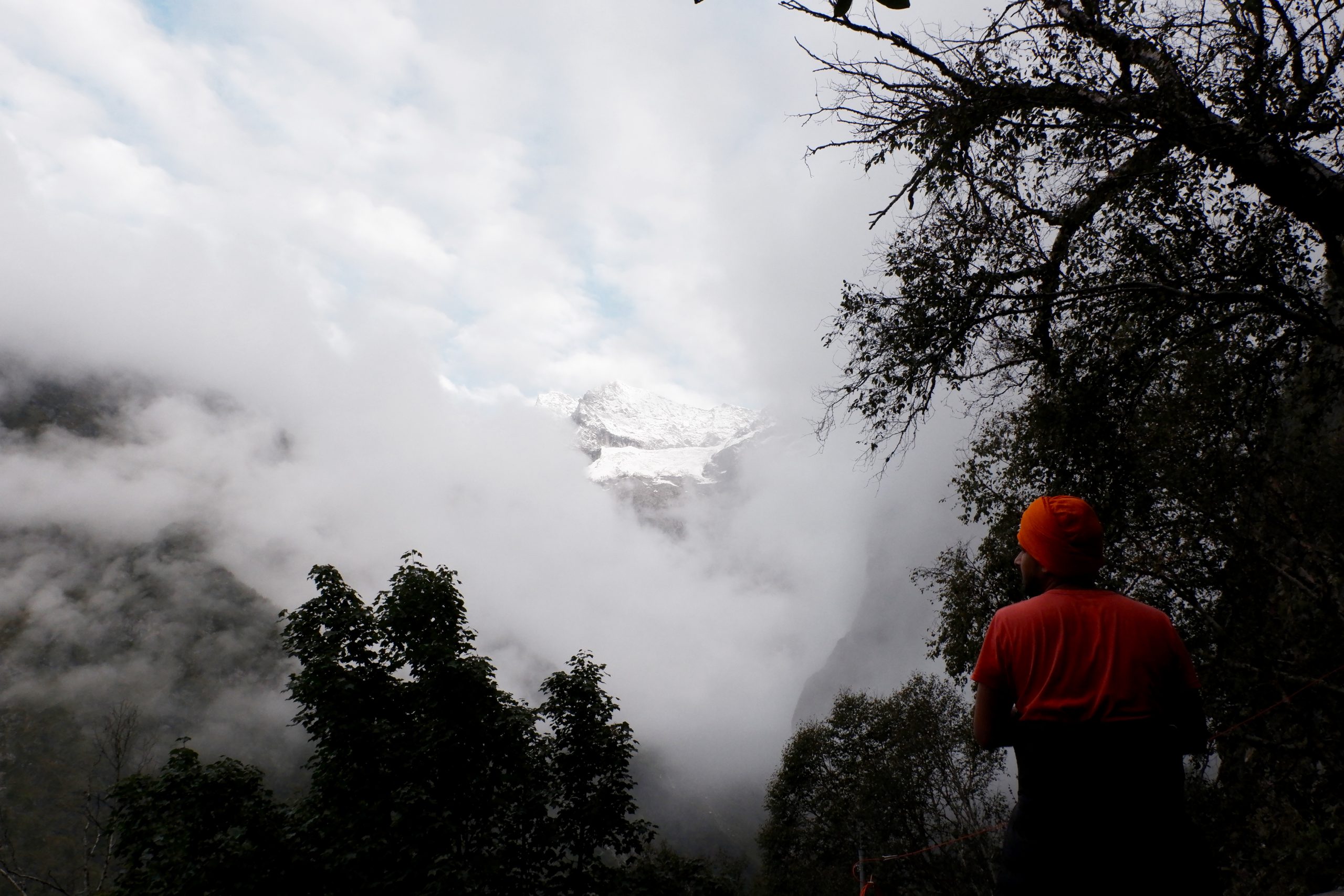 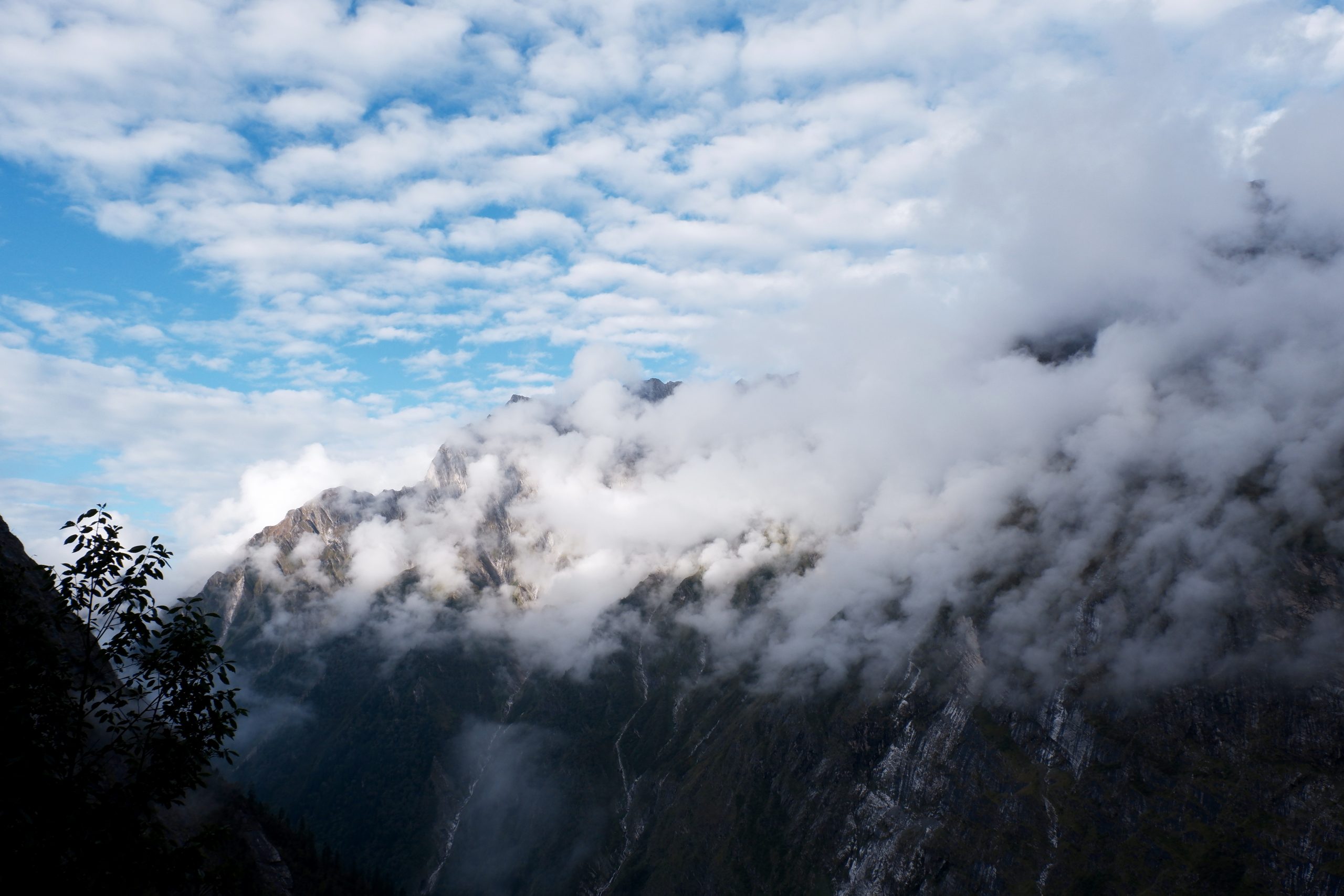 blue parts in the sky

A small odyssey of suffering began for me: I had to go to the toilet. But it wasn’t a good bush location and there was nothing at the dhabas and they wouldn’t let me go around the corner. At some point I found something steep and overgrown where I could almost have rolled down the slope. That annoyed me – so much is taken care of, but not toilets (on other such hikes they are).

Then we had breakfast (on my trip, there was 70% Alu Parantha for breakfast, which I’m now sick of) and went on again. 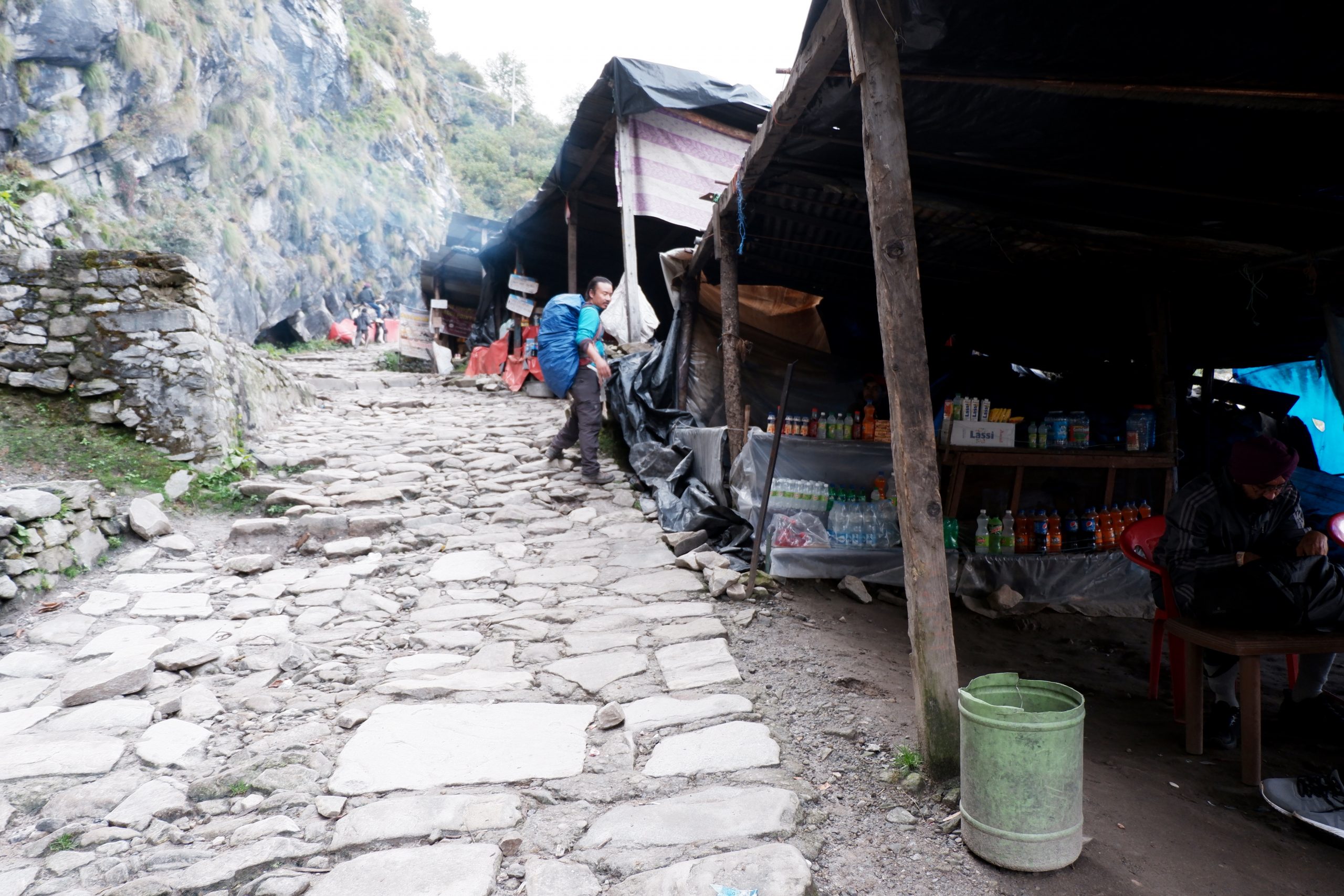 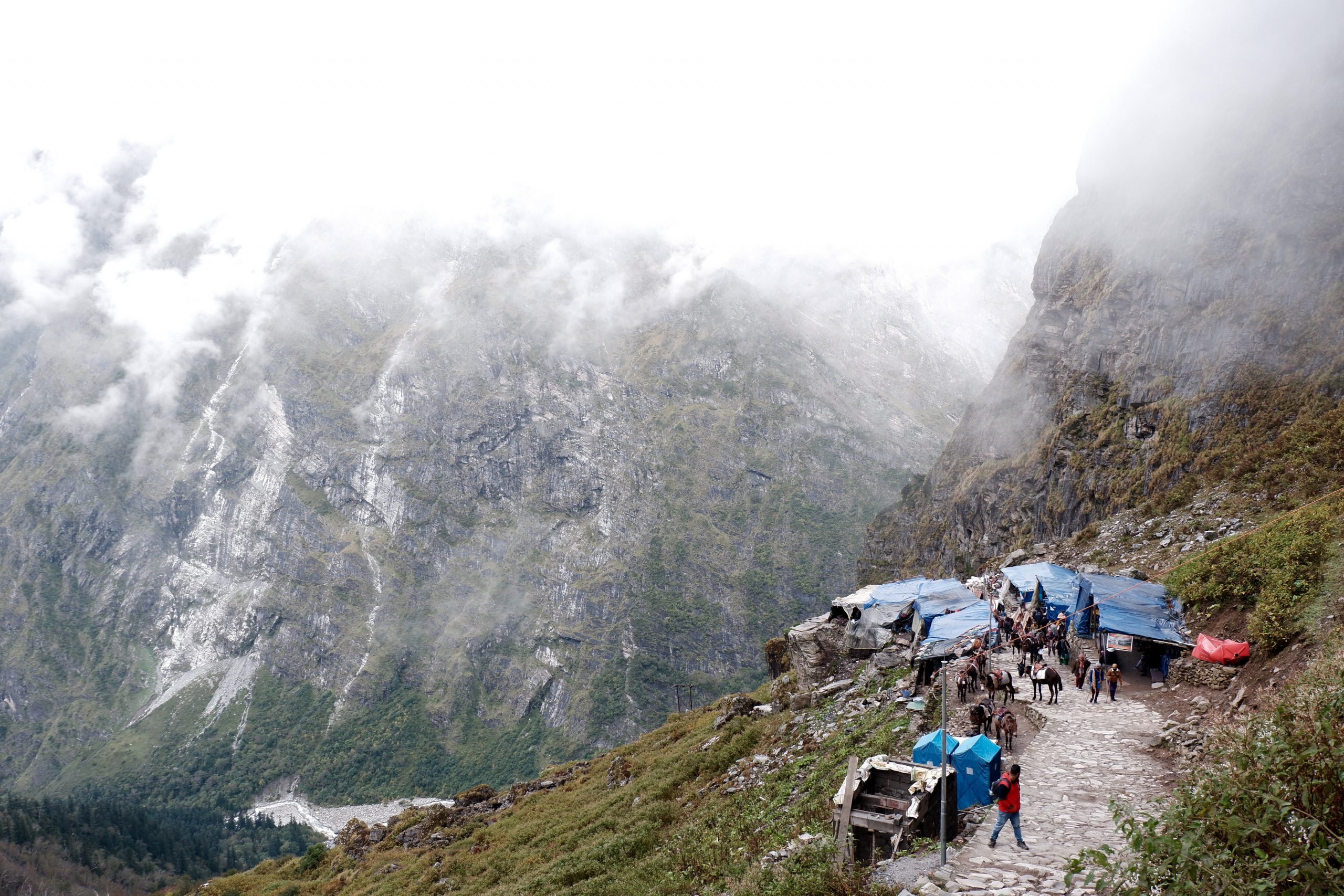 Then there was a junction in the road, the horses took wide curves, the walkers could take shortcuts with steps. Around here I felt the altitude very much and groped my way forward very slowly, step by step. Nevertheless, we were still faster than the others and around me I was the only woman who managed it on foot anyway. With the appreciative looks and words of the others, I was a bit proud. 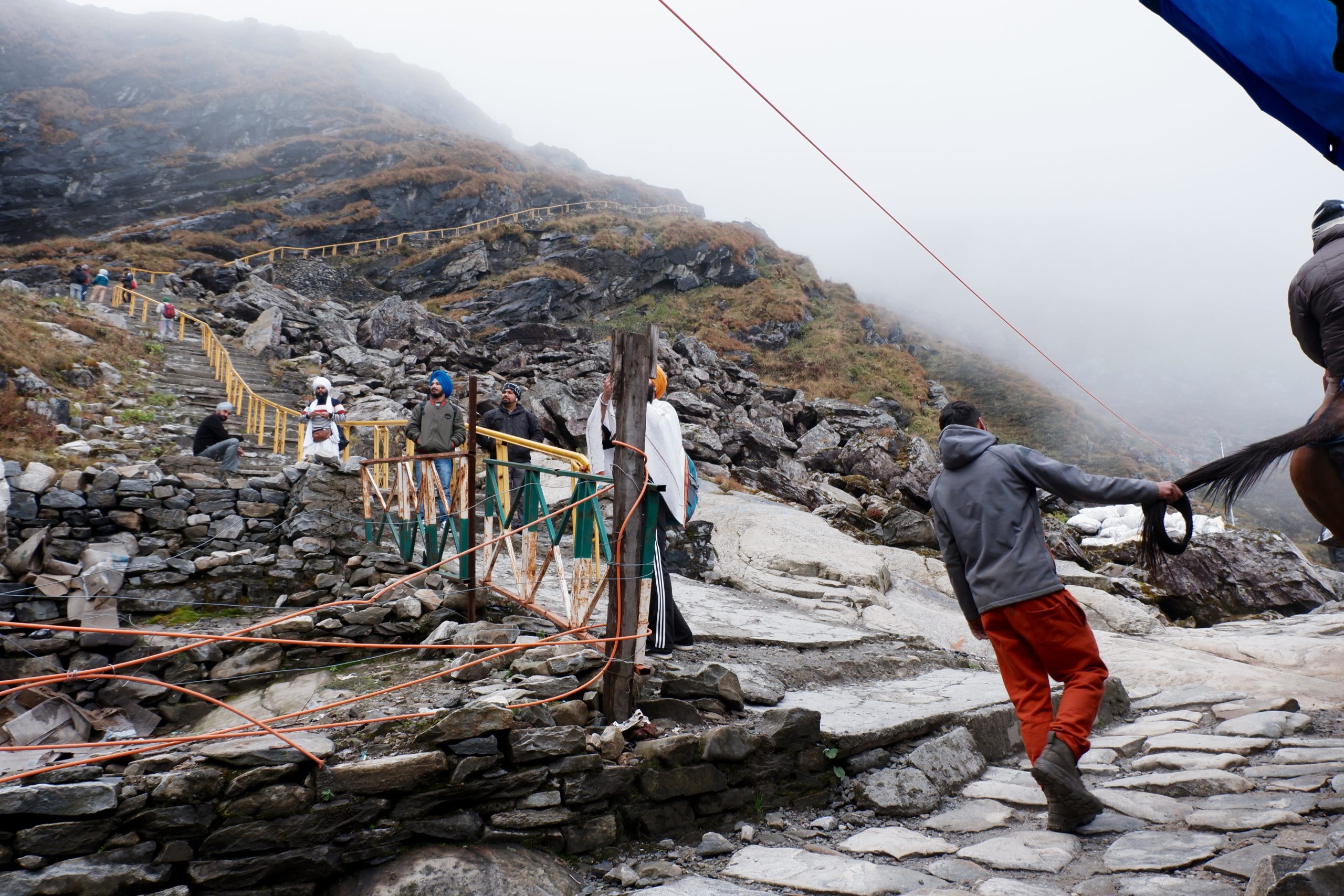 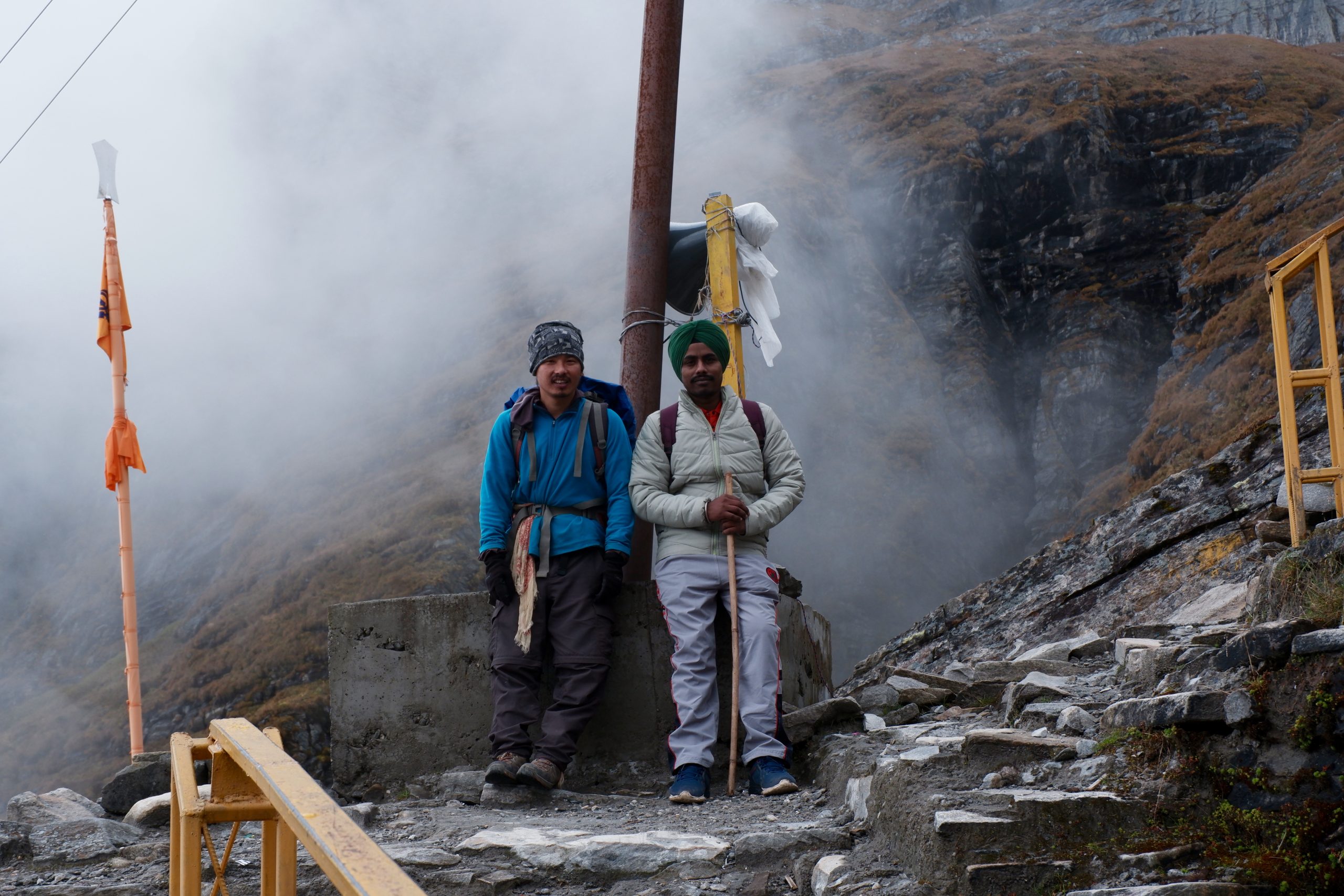 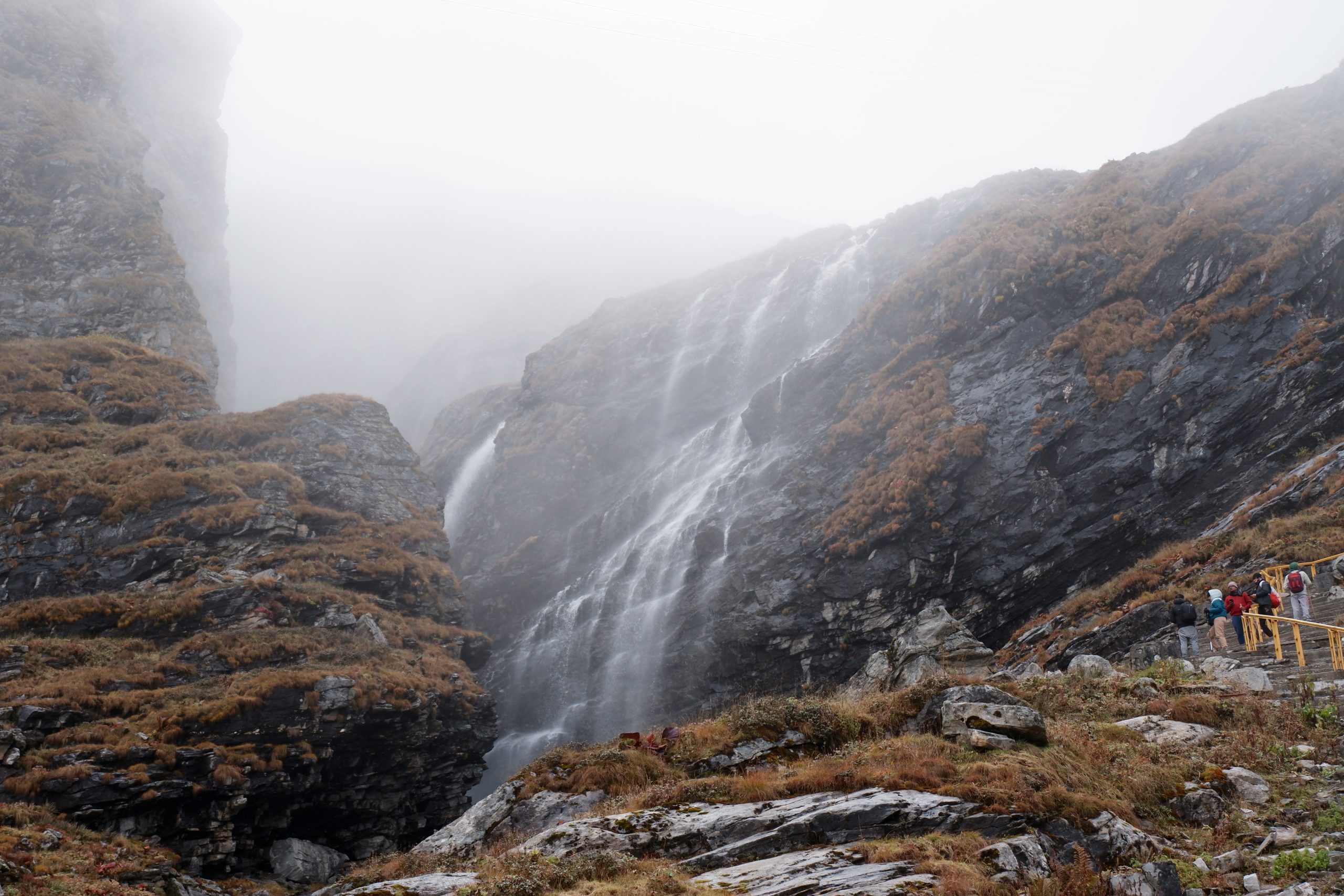 And then we were at the top! There is a very beautiful lake here and the temple next to it. We wanted to walk along the lake, but we were forbidden to do so. You are also not allowed to go to the edge of the lake with your shoes on, for example to feel the temperature of the water. And then I asked myself why people can make a lake their property and set rules. 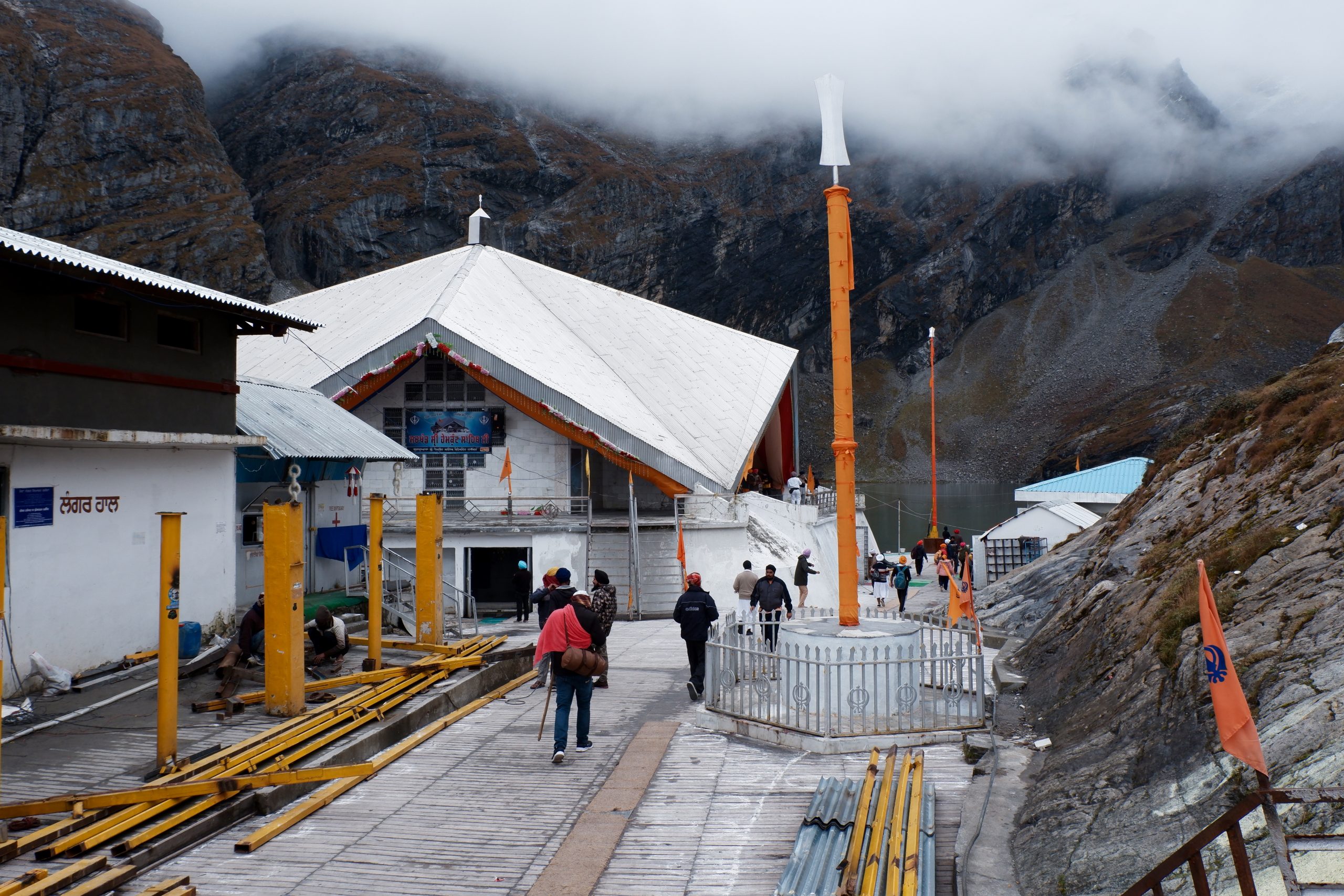 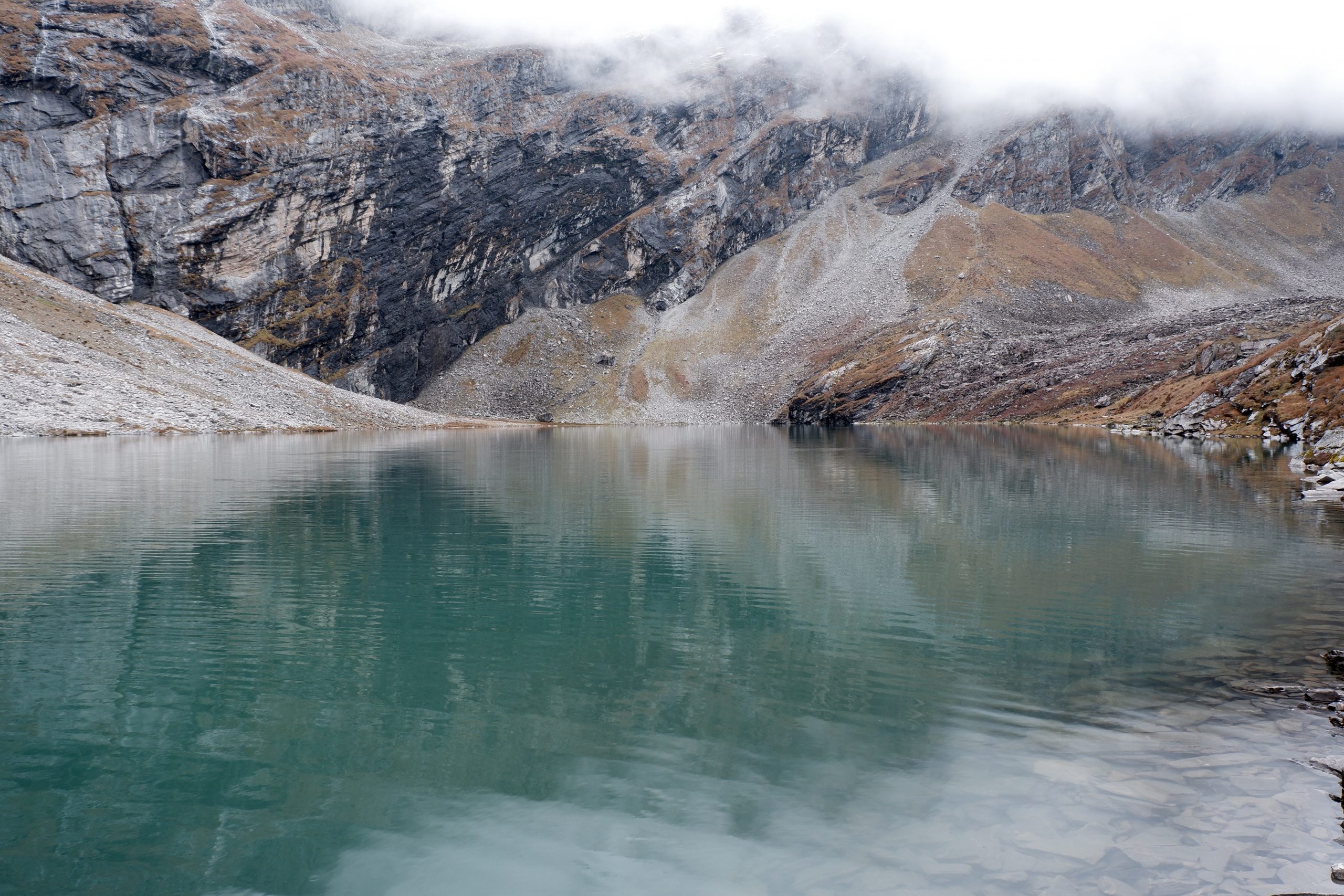 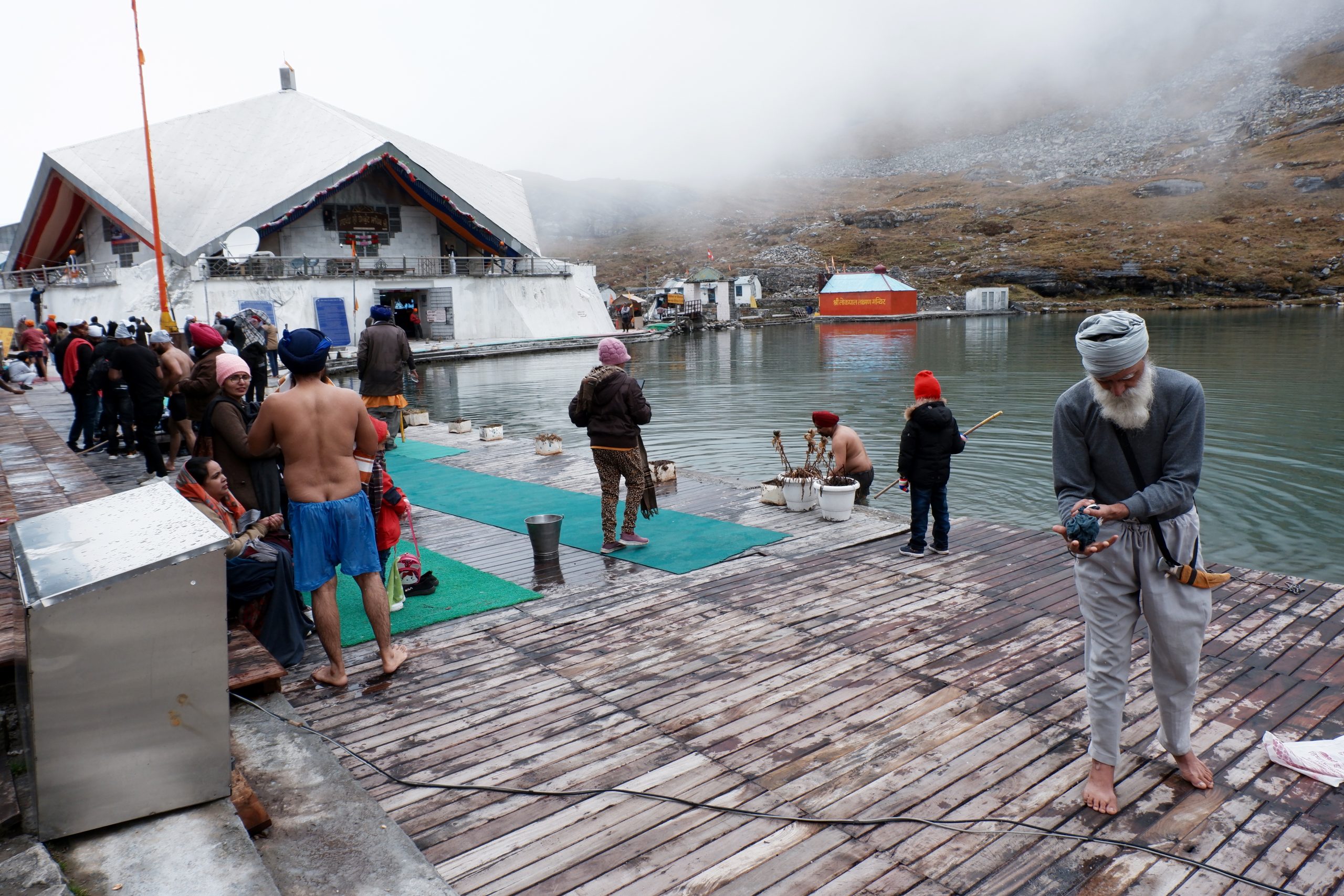 The devout brave Sikh jumps into the water. 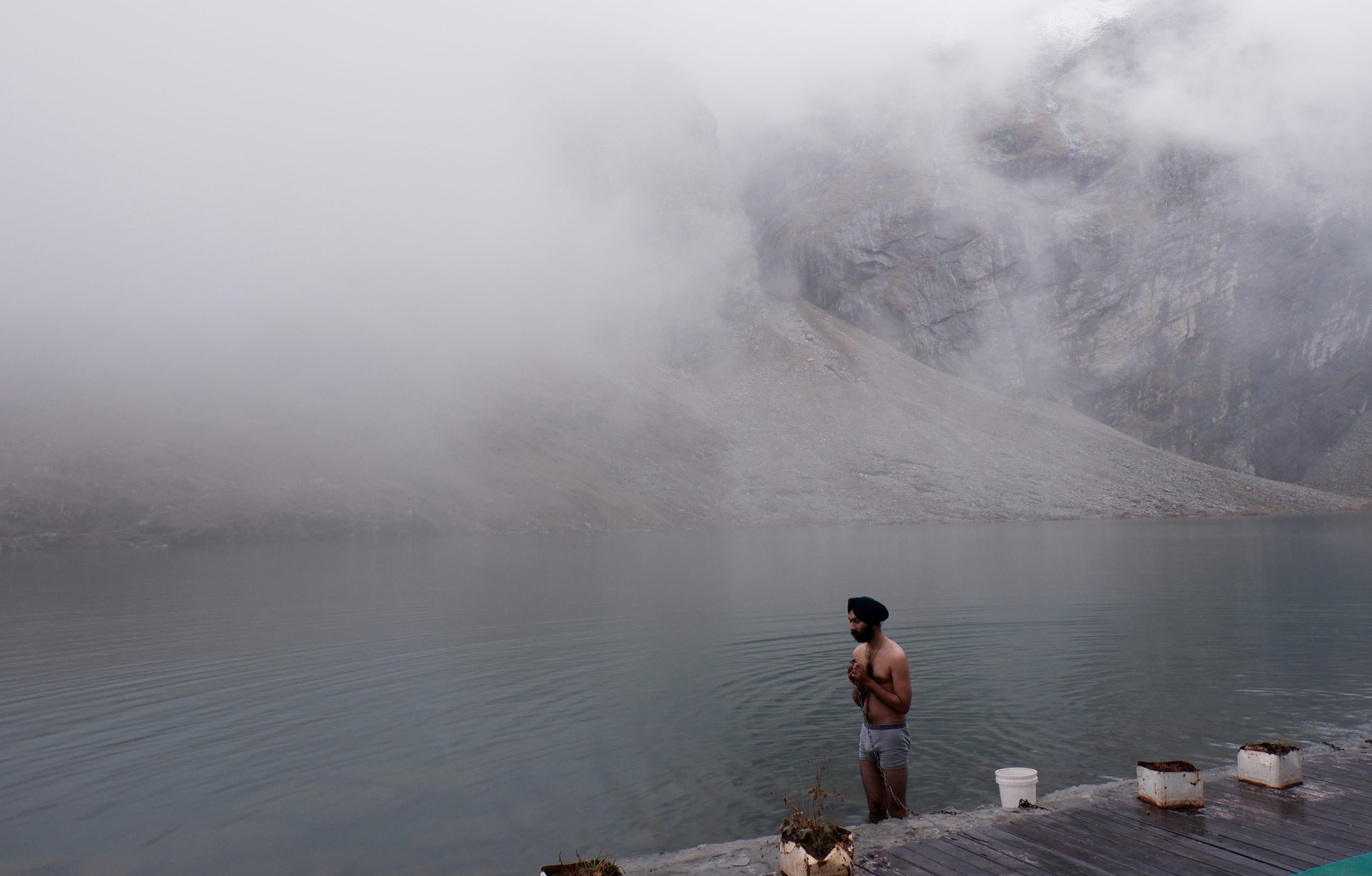 Then it’s time for the prayer hall – we were amazed at how cosily it was furnished, snuggled into the blankets and listened to the prayers or what someone read from the holy book, the Granth Sahib. It had a very nice atmosphere and I enjoyed staying there. 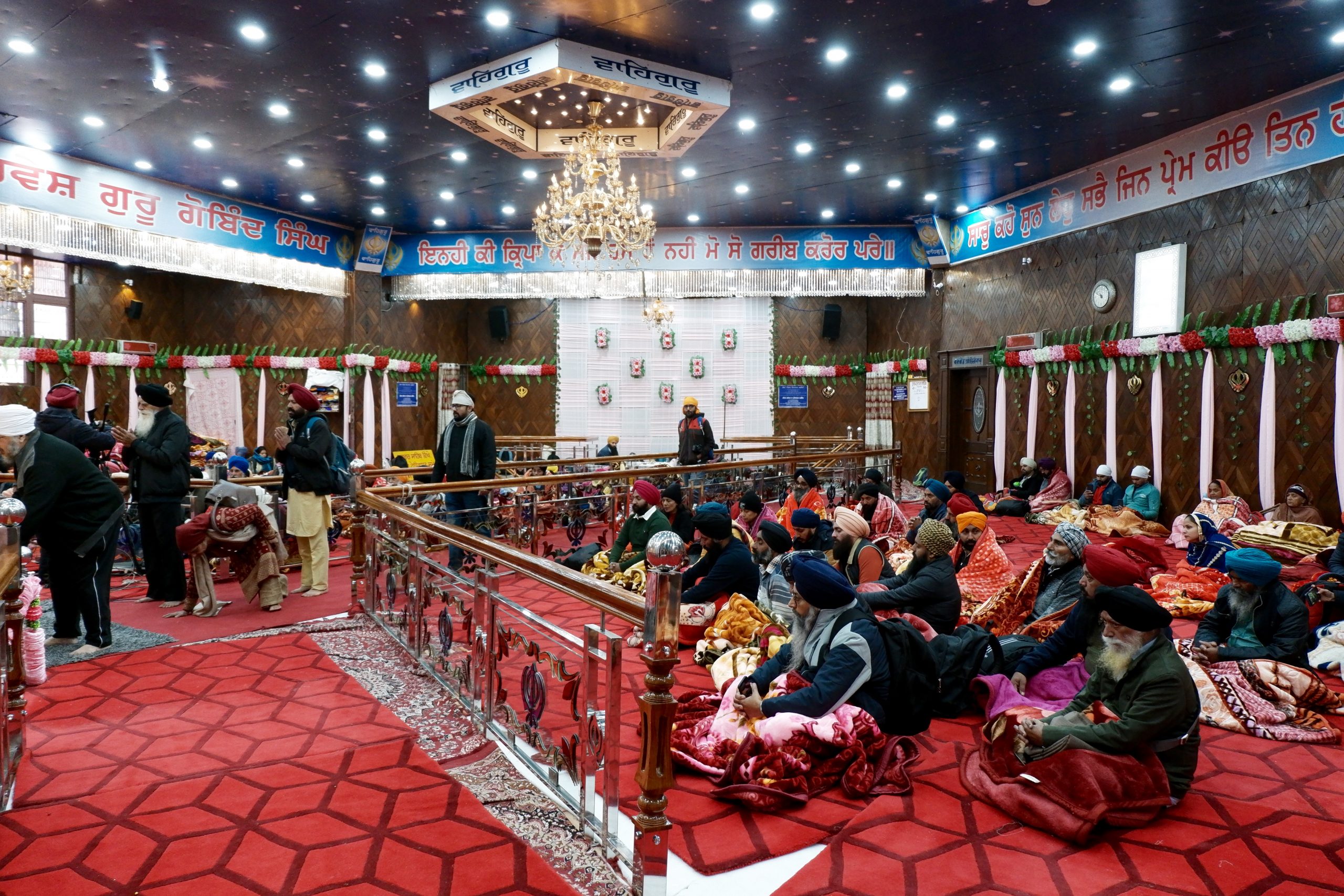 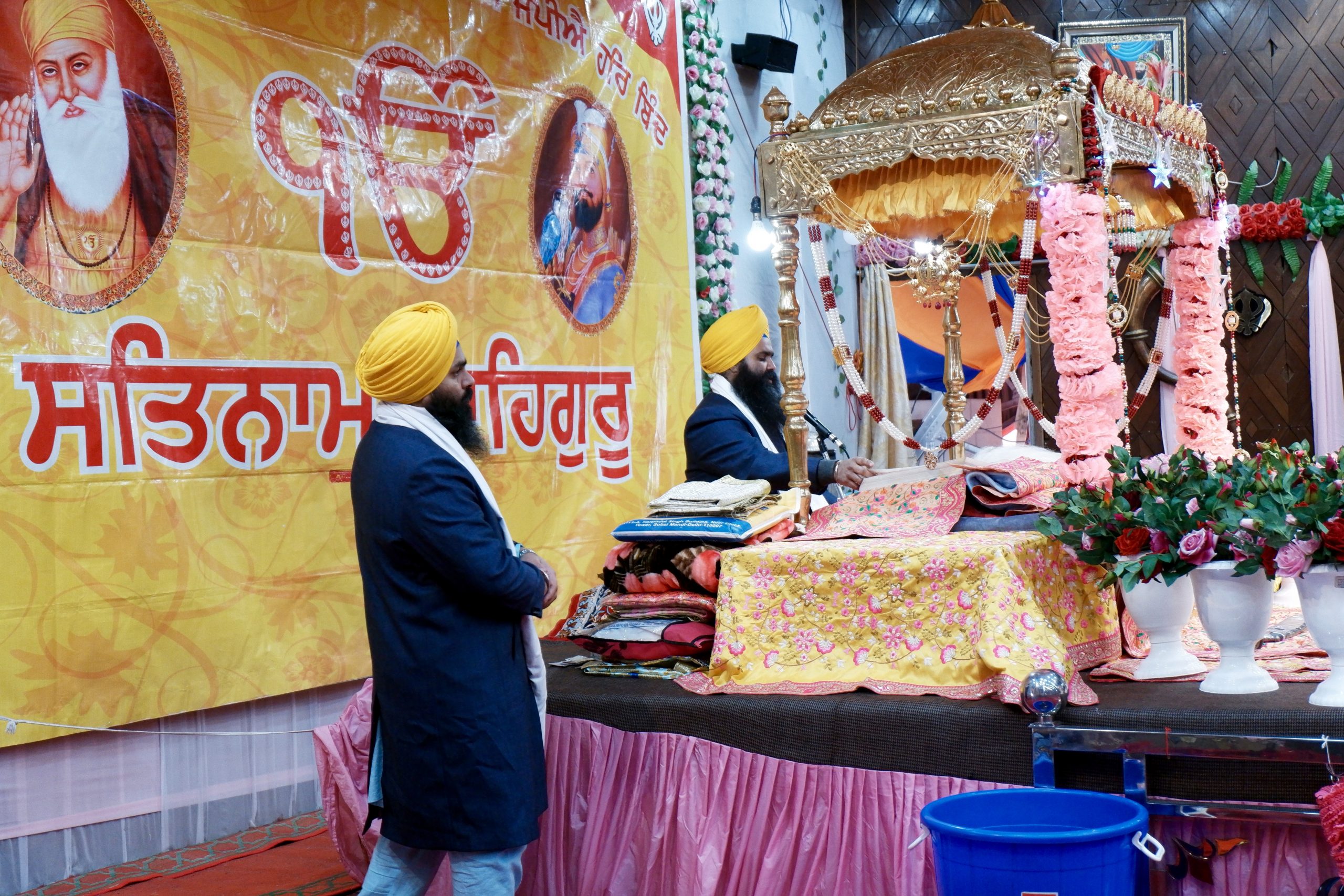 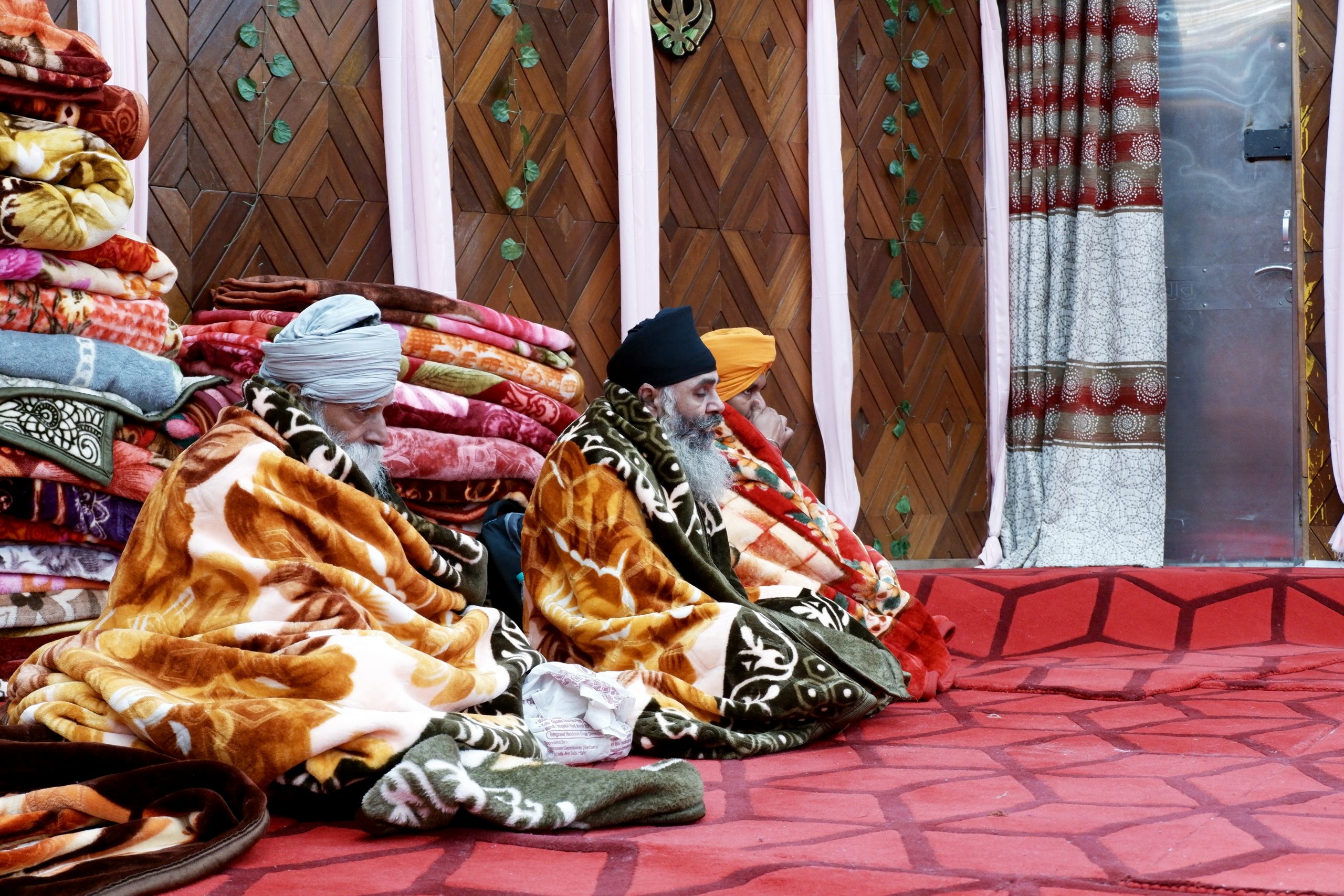 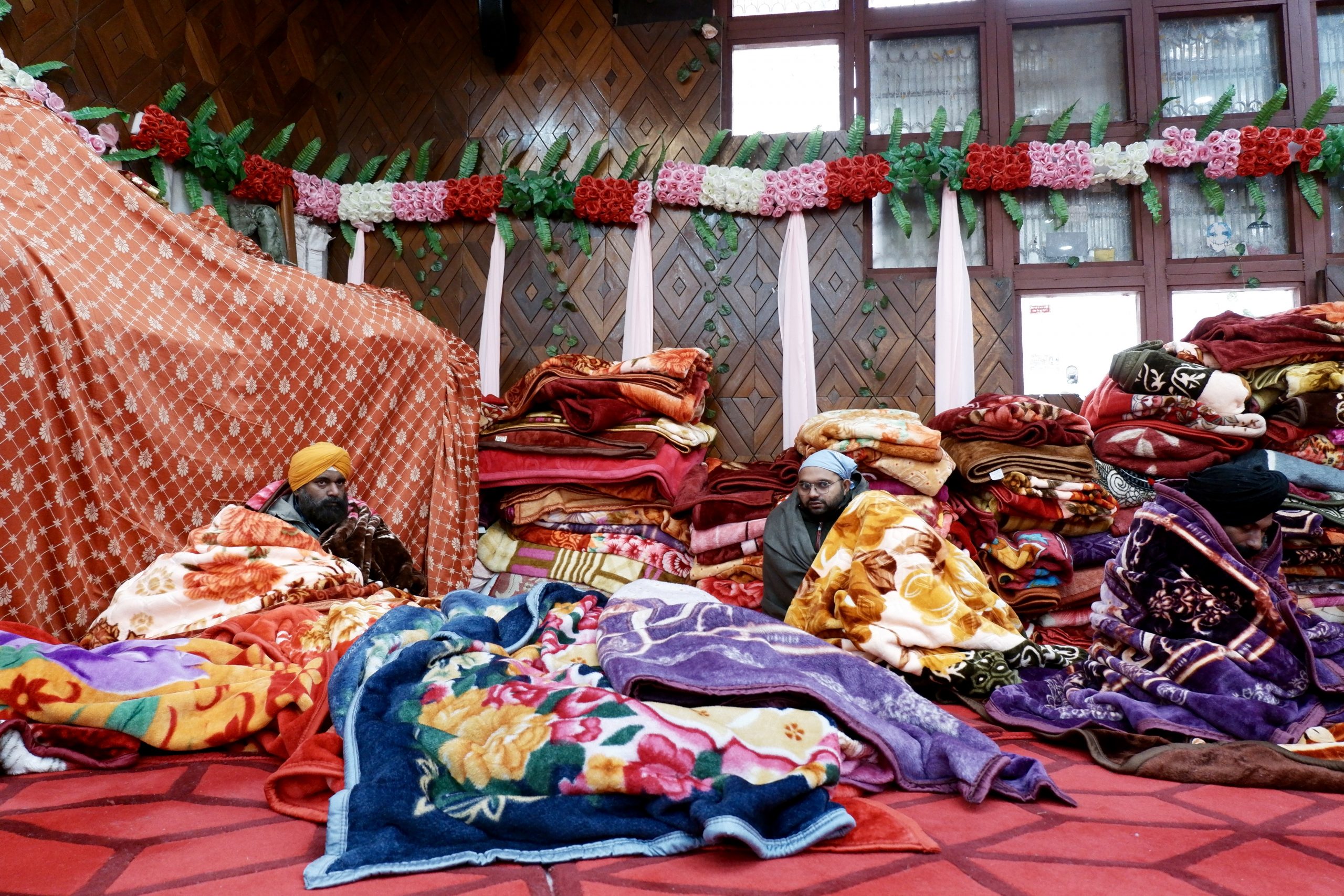 Afterwards we came to another treat of the Sikhs: in each of their gurudwaras they have a communal kitchen from which all who want can get food and tea for free. This is always organised communally. And with the chill outside, tea and a lentil mixture were just what we needed. 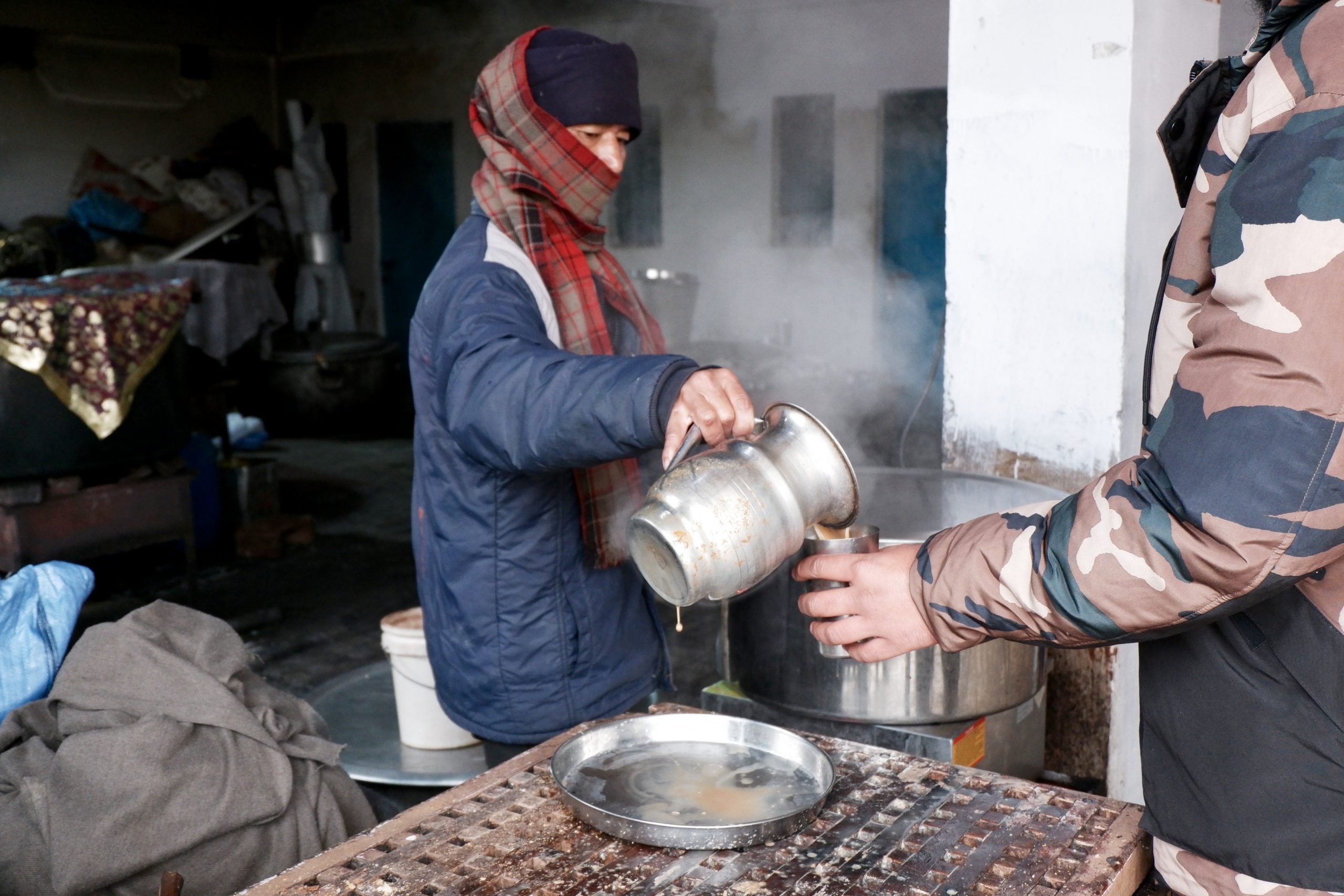 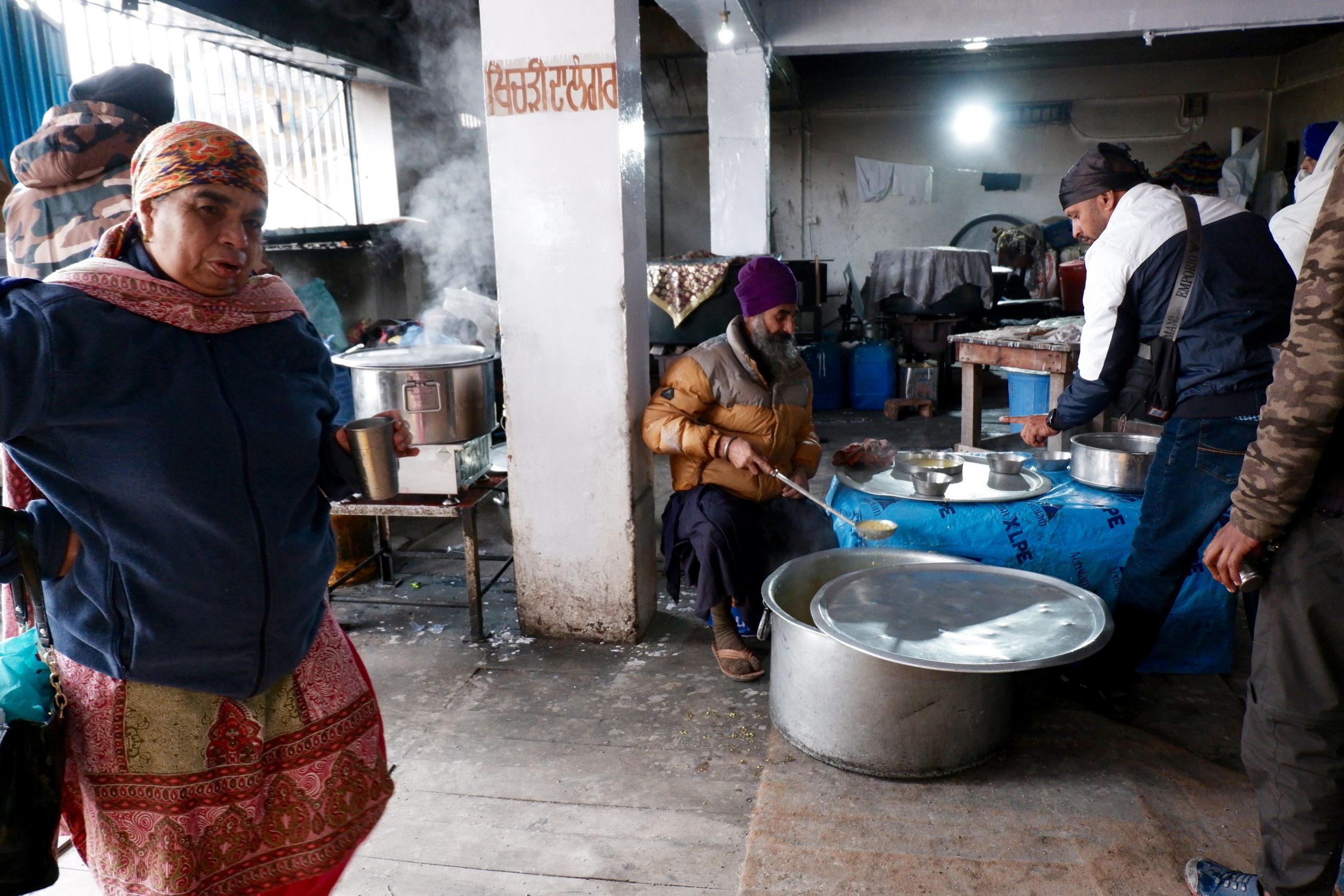 And then we thought it was time to go back and jumped to Gangharia. It had taken us about 5 hours and we could have gone further, but the fact that it would be 2,000 metres downhill, the rain was coming again and we didn’t want to spend another night in Govindghat spoke against it. So we hurried down the next day and drove straight to our next temple. I wonder which one it would be? 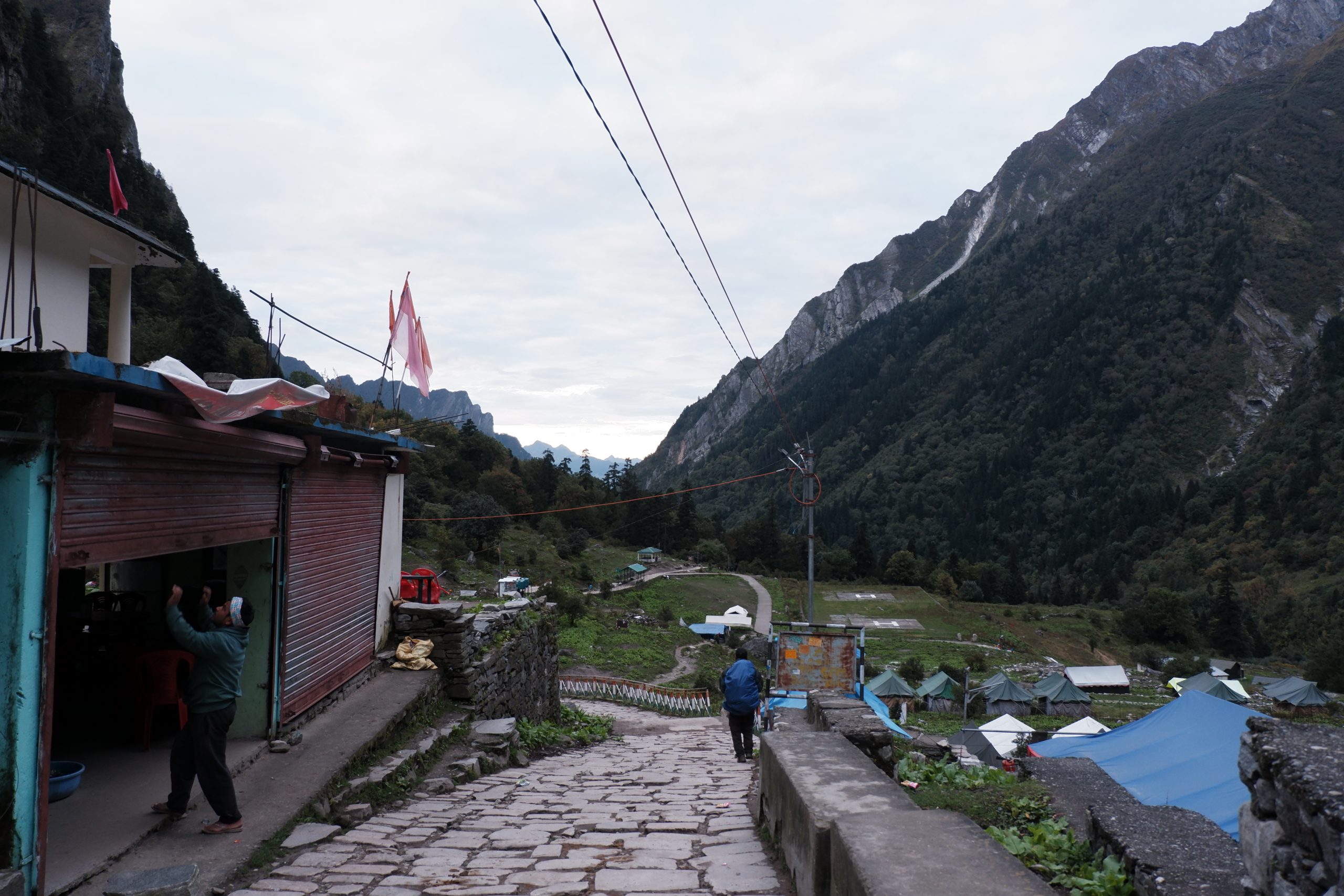