And again a wonderful morning started at the farm. However, it was time for us to say goodbye. It was quite emotional. Aitengül and I had a warm connection without words. I don’t know if it’s the same for others, but with some people (rather women) whose language I don’t speak, I have a more special feeling of closeness than with others. Aitengül had it translated that she felt the same way. She would like me very much, I am so “simple”. I love her mischievous nature, her loving attention, her readiness to blurt out the slightest hint of amusement and her calm busyness. Unfortunately, I’m not really good at selfies and so all we have is this silly picture. And a heartfelt goodbye hug. 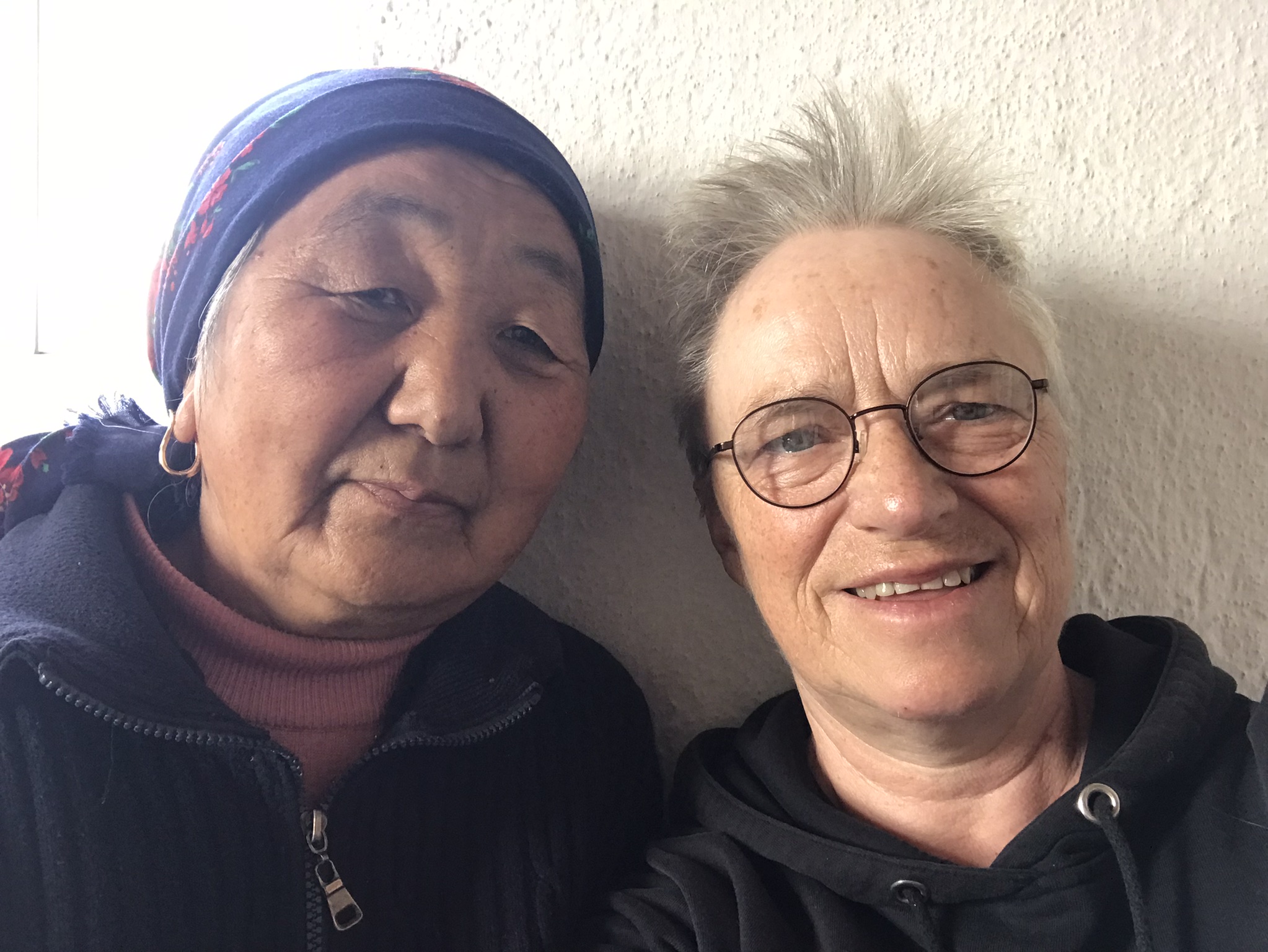 Her husband actually had tears in his eyes when Rakhat said goodbye. He is quite worried about the future and was very happy about the visit of the relative. We started off in silence and in thoughts. Then we met the elder son again on the horse with his sheep. 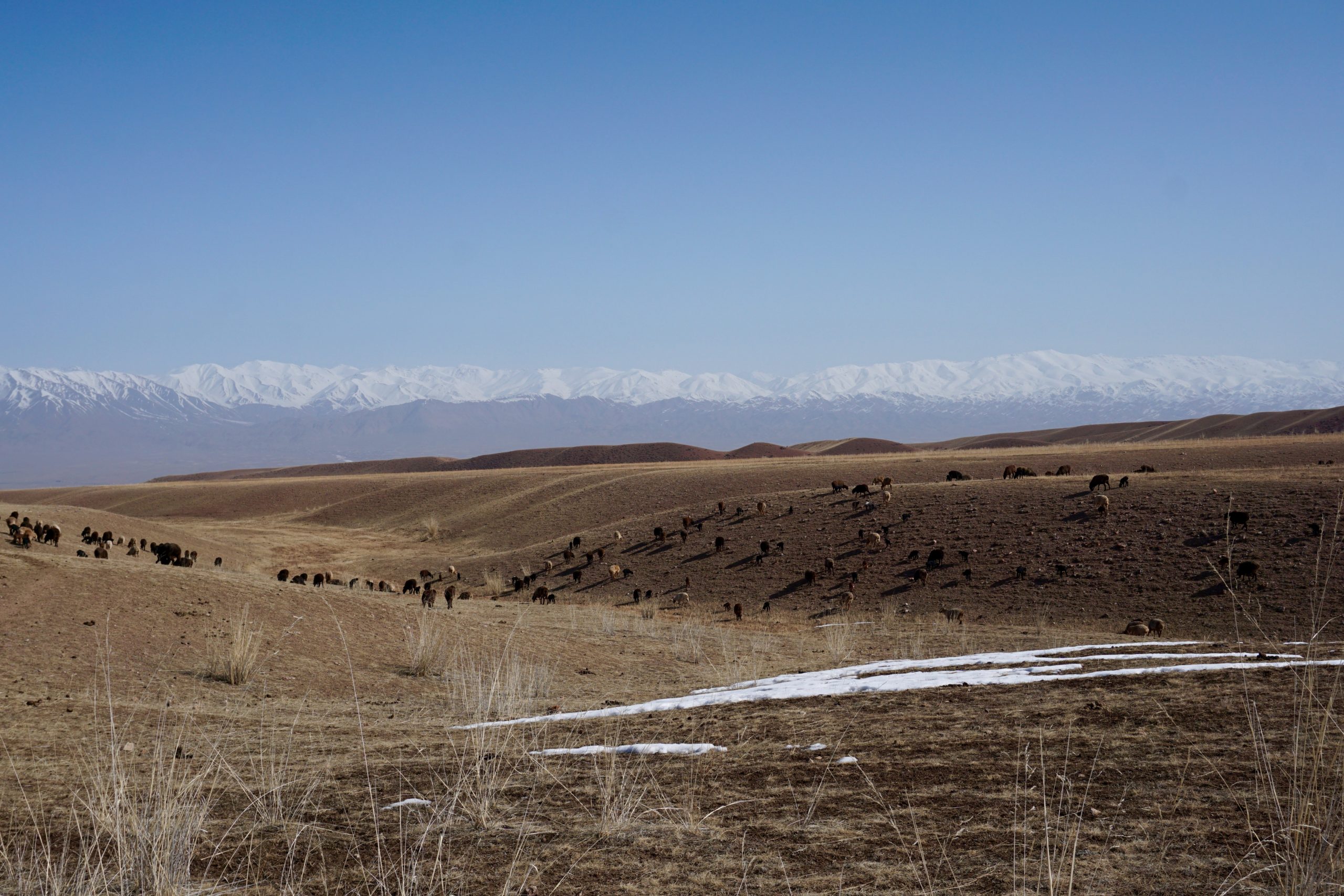 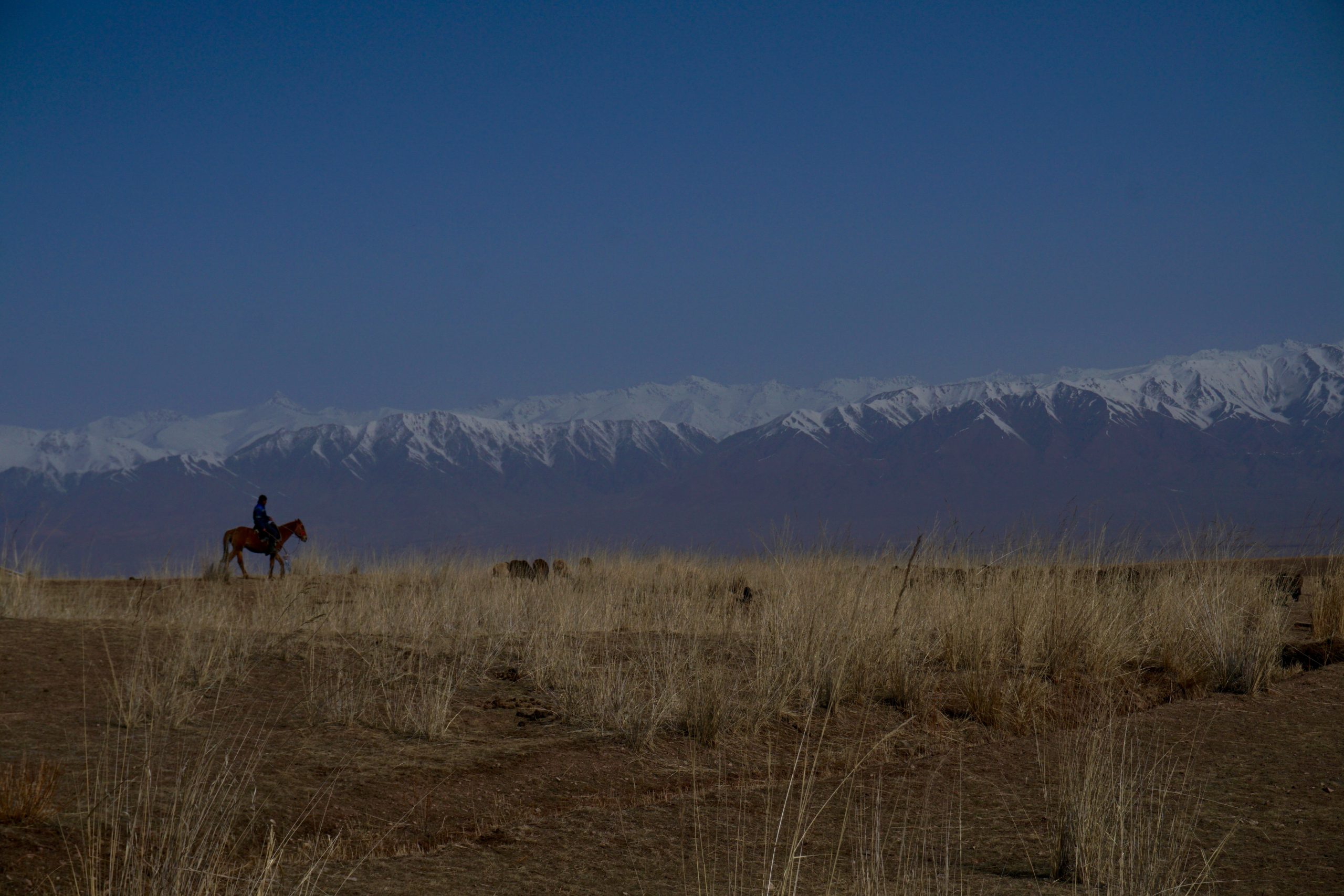 We went downhill slightly differently and saw some other details. 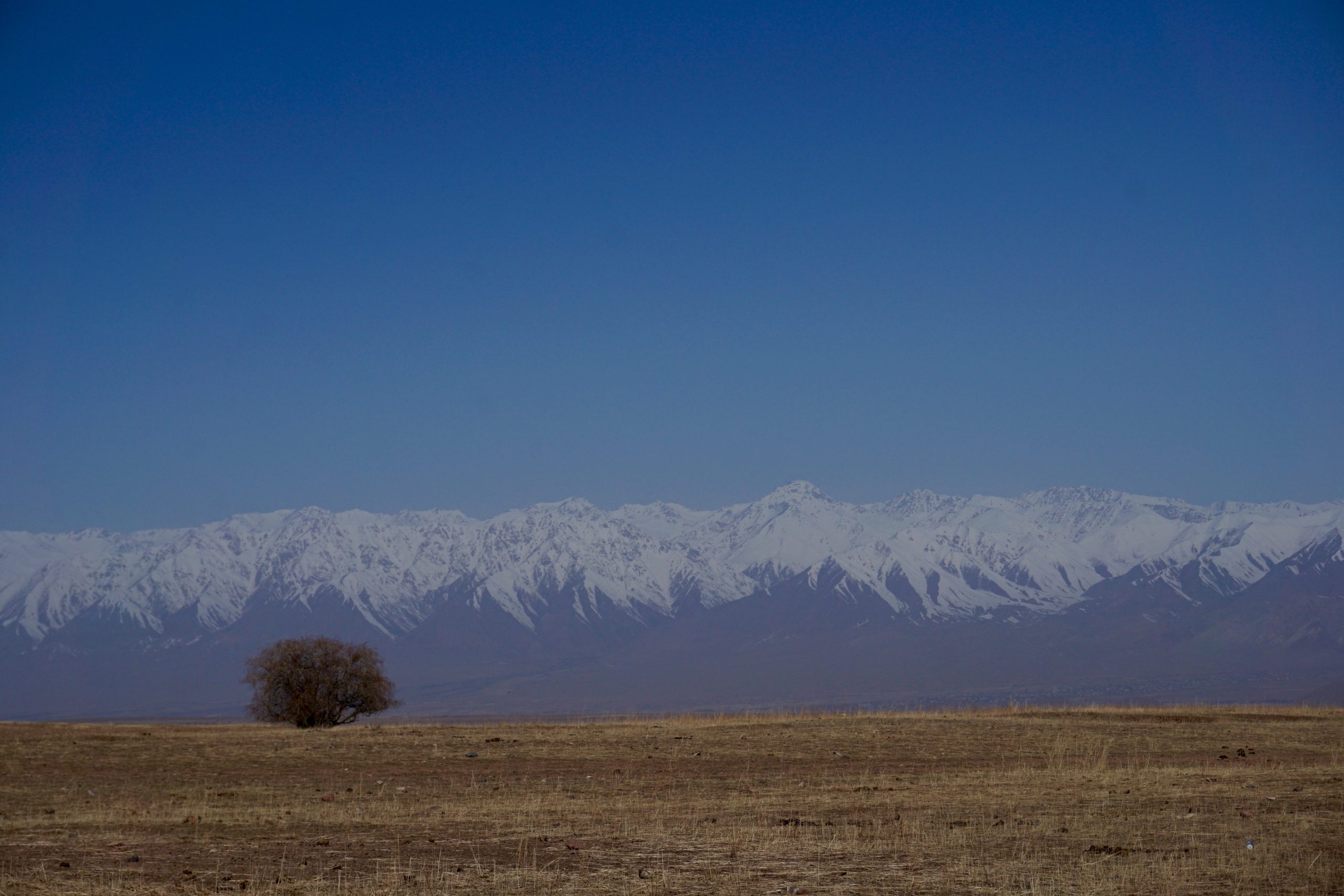 The Russians once had big plans here and thought they could cover the expanse with water canals and cultivate the land. Nothing came of it. For the Kyrgyz it seems rather hopeless and they do not try any further. 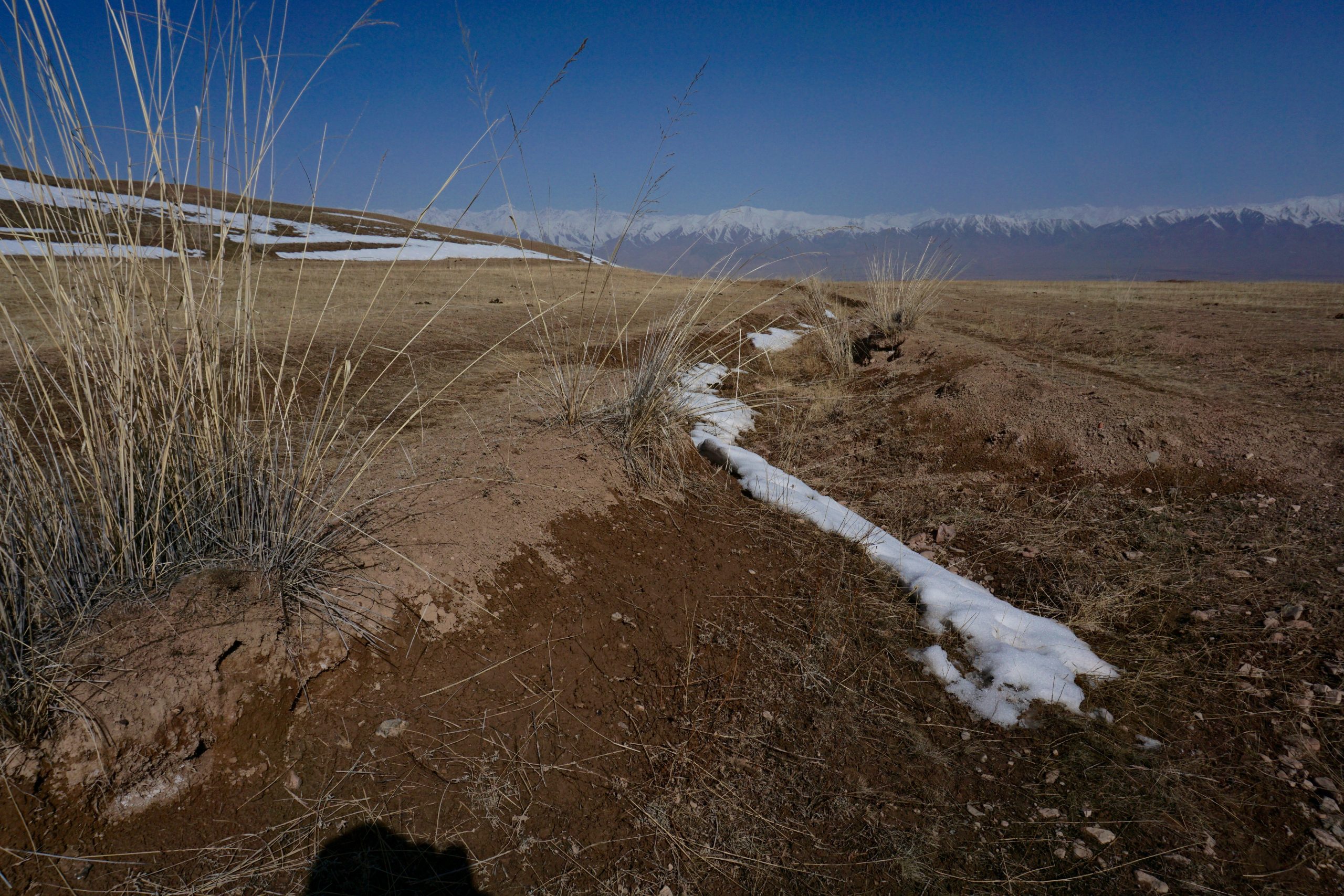 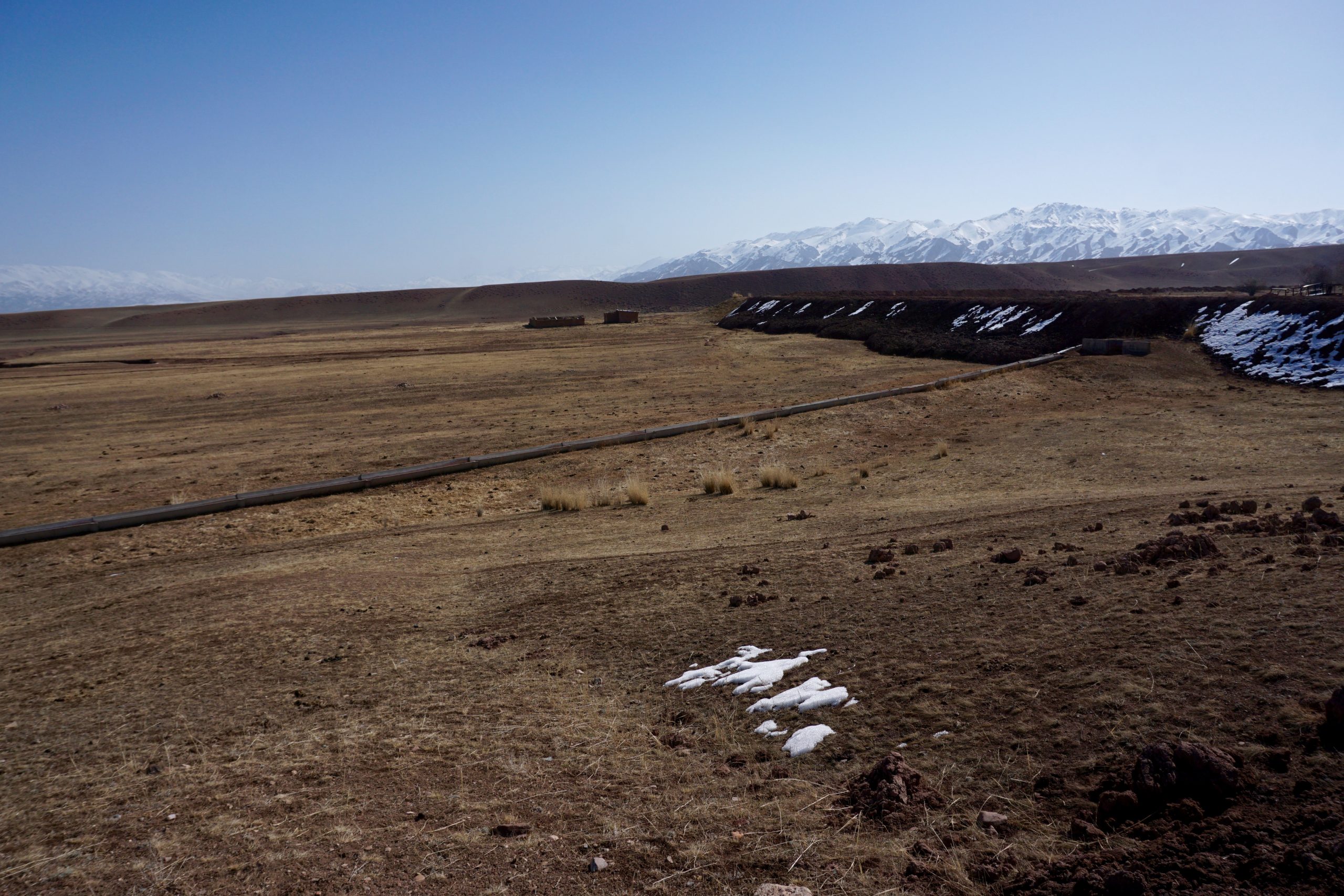 Walking downhill was quicker than walking uphill, but the sun was already quite warm and my feet were fuming. Nevertheless, the vastness with the different details continued to inspire me. 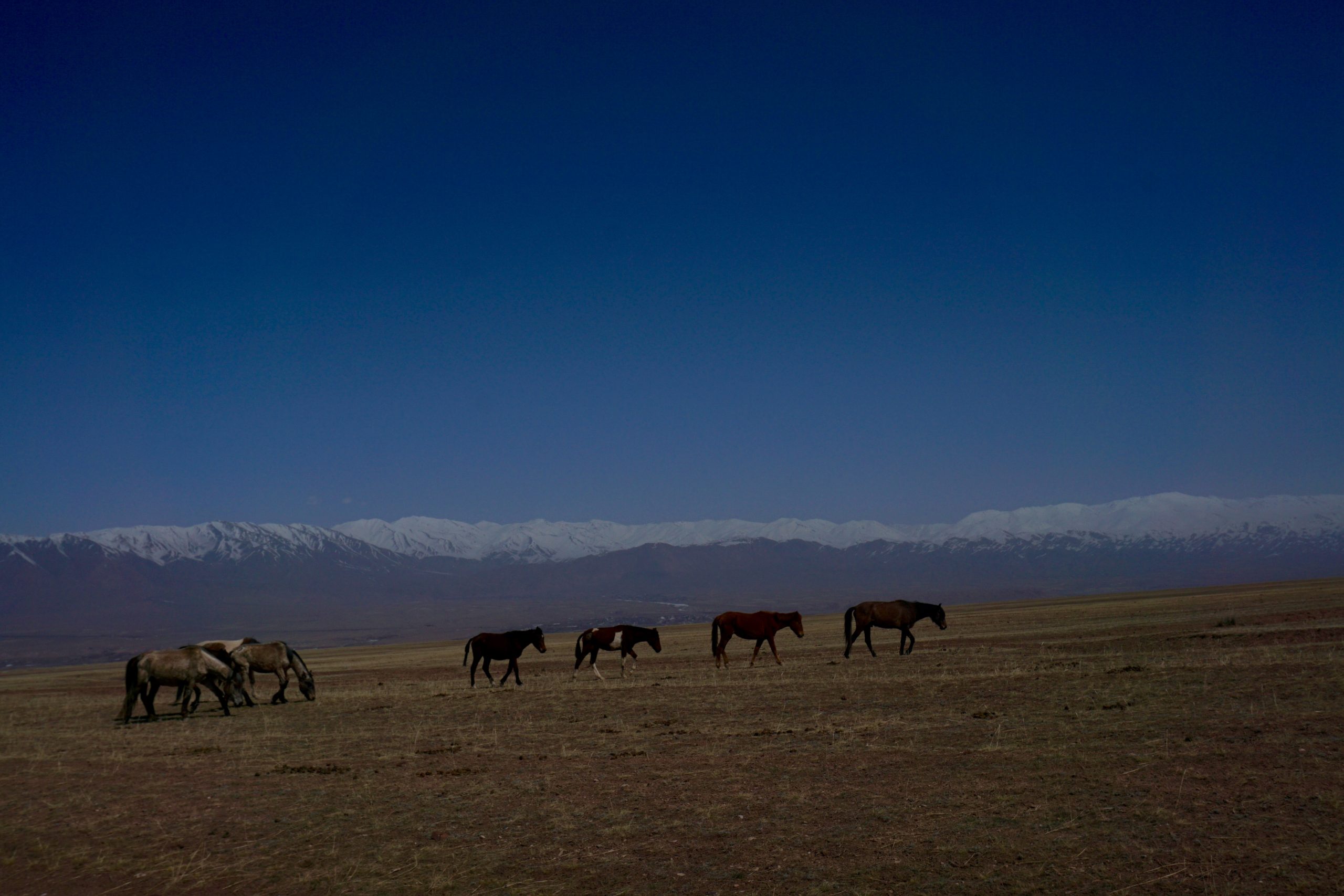 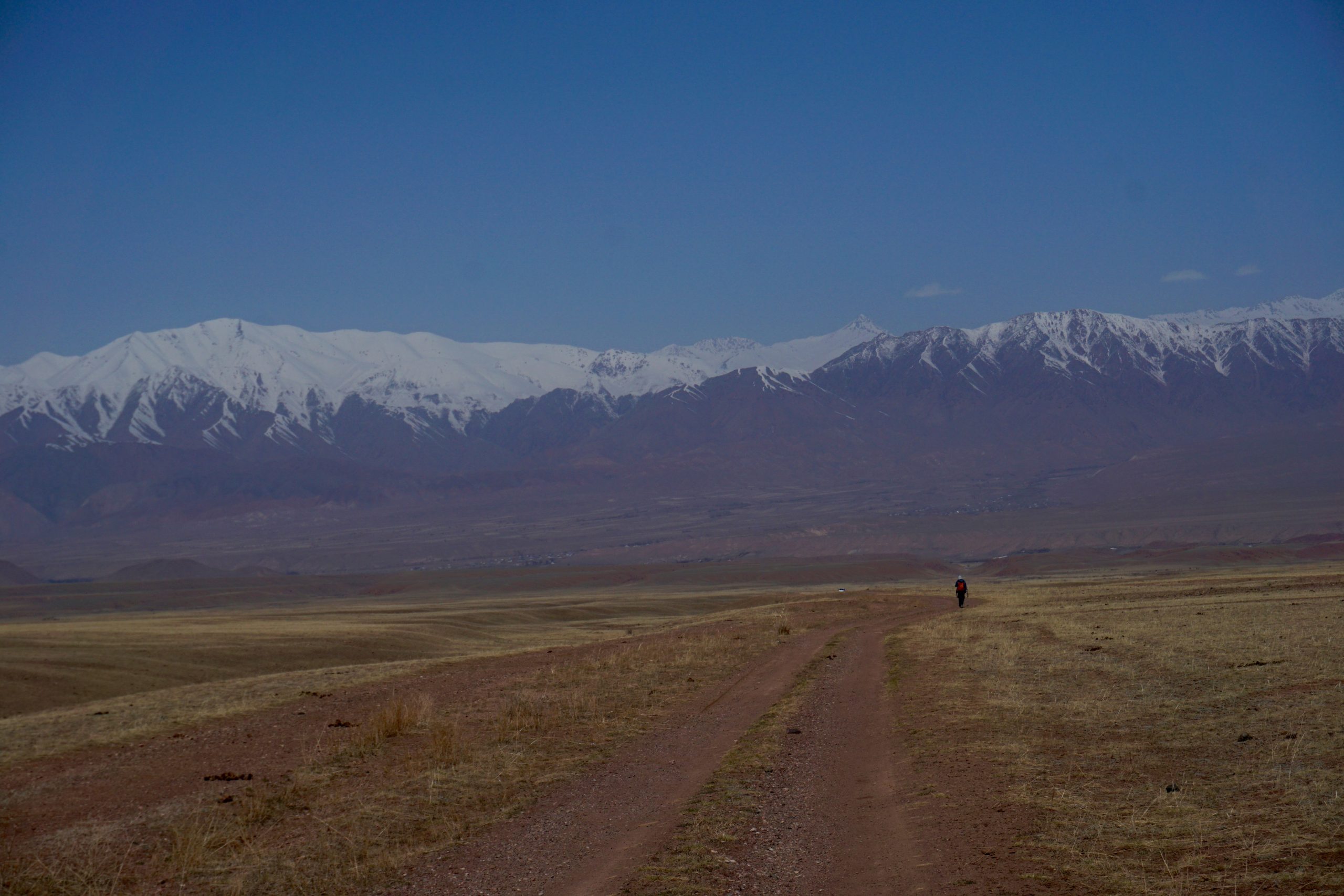 Rakhat in the distance 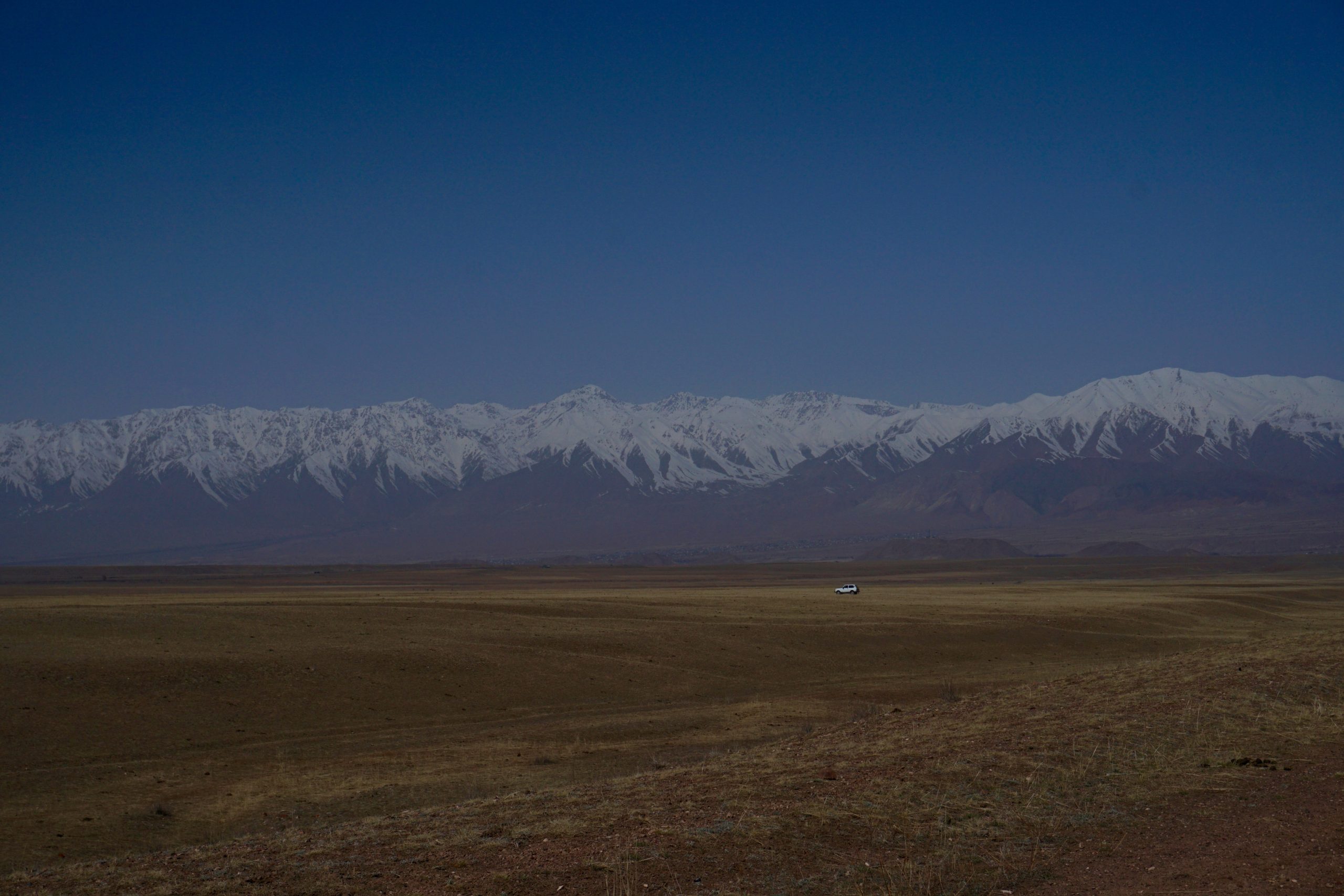 car in the distance 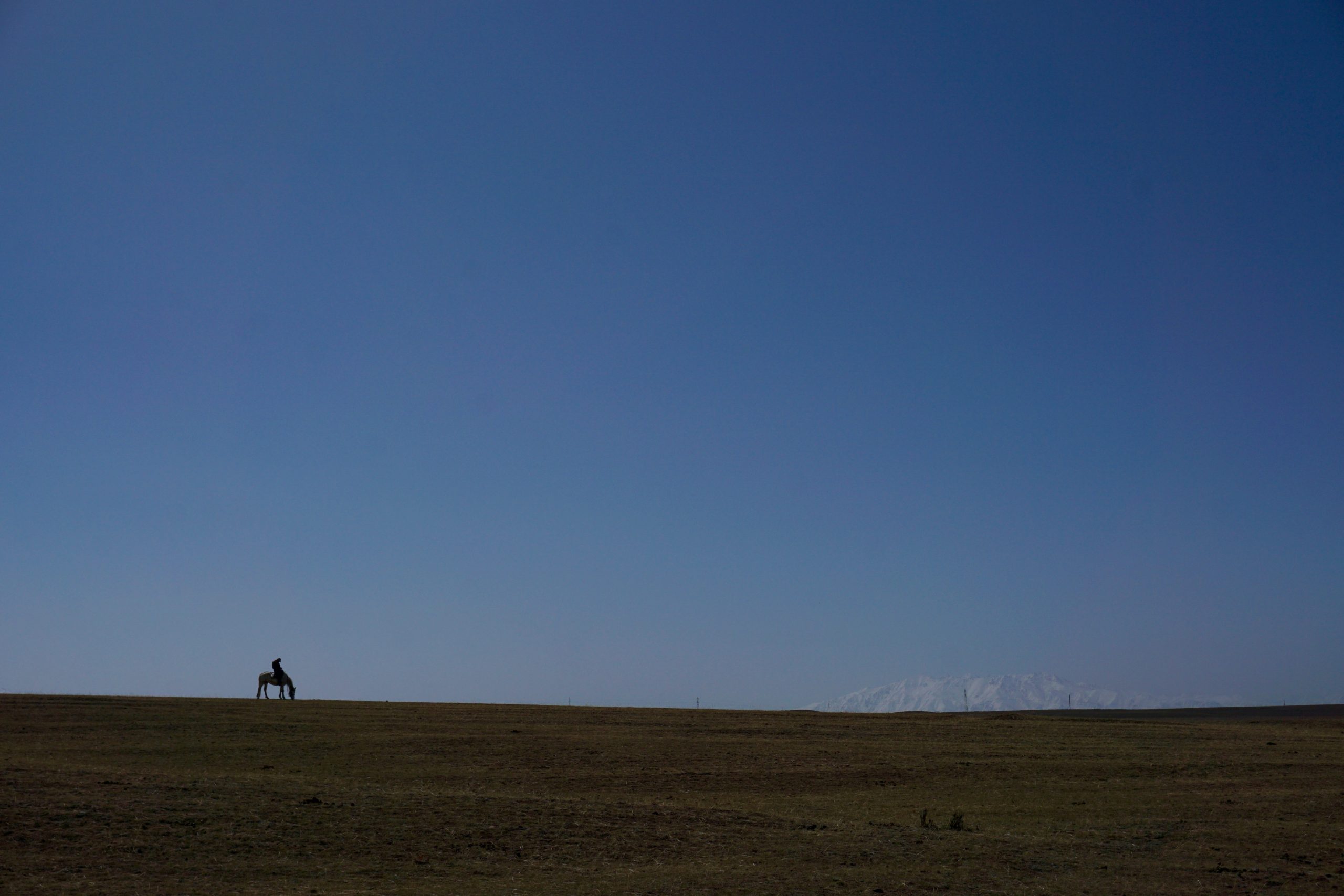 rider on the horizon

But enough with these wide pictures! There was also something closer to see, namely this stone. It has a hole through the middle so that a string could be pulled through and tied around a horse. Then the horse was allowed to walk in a circle with it and thresh or grind. I had actually understood threshing, but then the grains all go flat, don’t they? 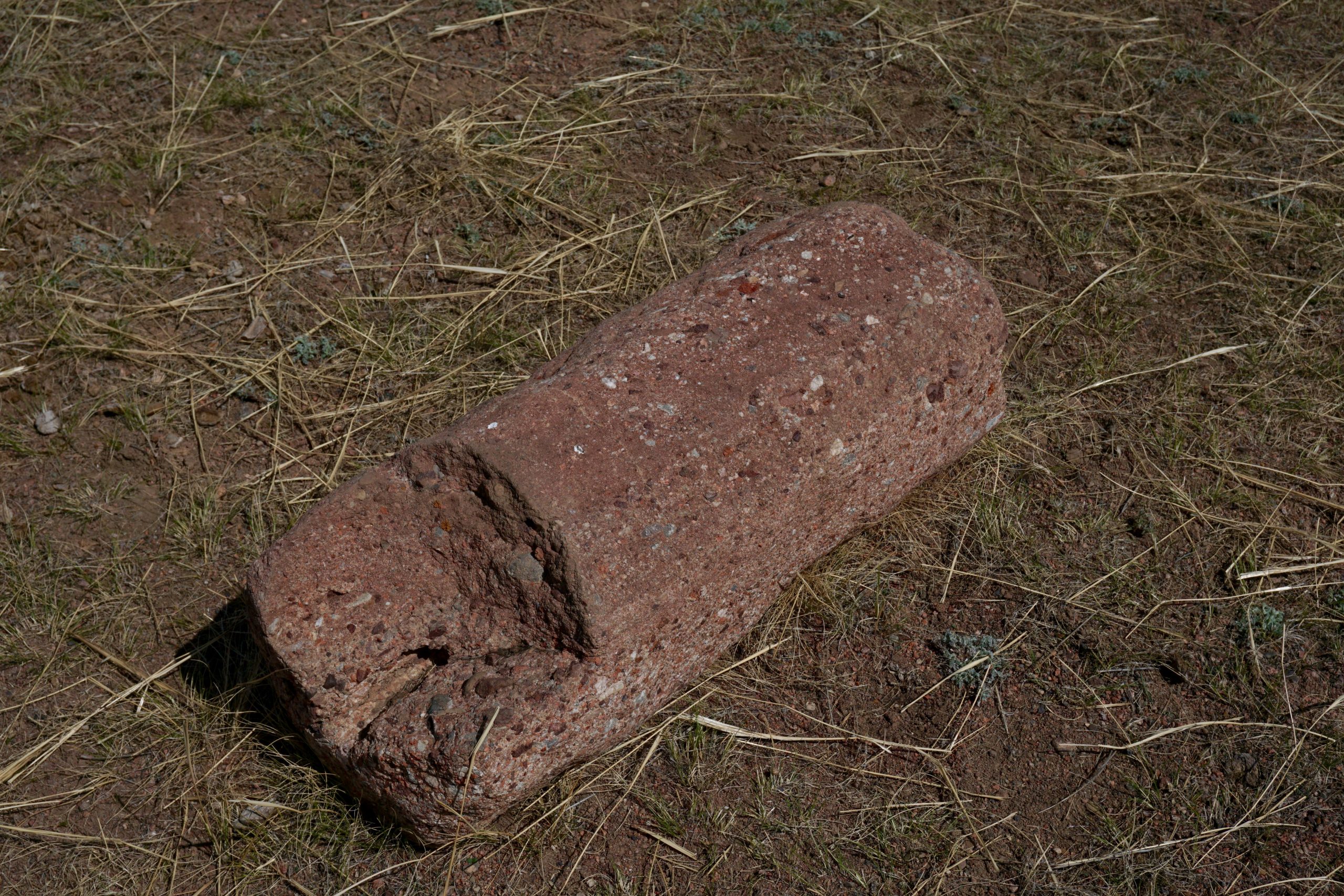 Stone to pull or roll

Not only were our feet fuming, our hair was greasy (mine longer than his) and we dreamt of warm soapy water. Rakhat did not dream but acted and found another relative who invited us to his house. He even picked us up by car! And he was supposed to have a hot shower! We went to the first relative for the rest of the luggage, had a cup of tea and then the next uncle was already at the door with his car! A smooth drive took us further west to the district capital of Chayek. There lives the maternal uncle (the other relatives were all from the father), a boss of several schools, with his wife (a teacher) and three children. Unfortunately, teaching and other professions in the field of education are not well paid in Kyrgyzstan and the two of them work hard for their children. But more about that later. First, the beautiful car ride. 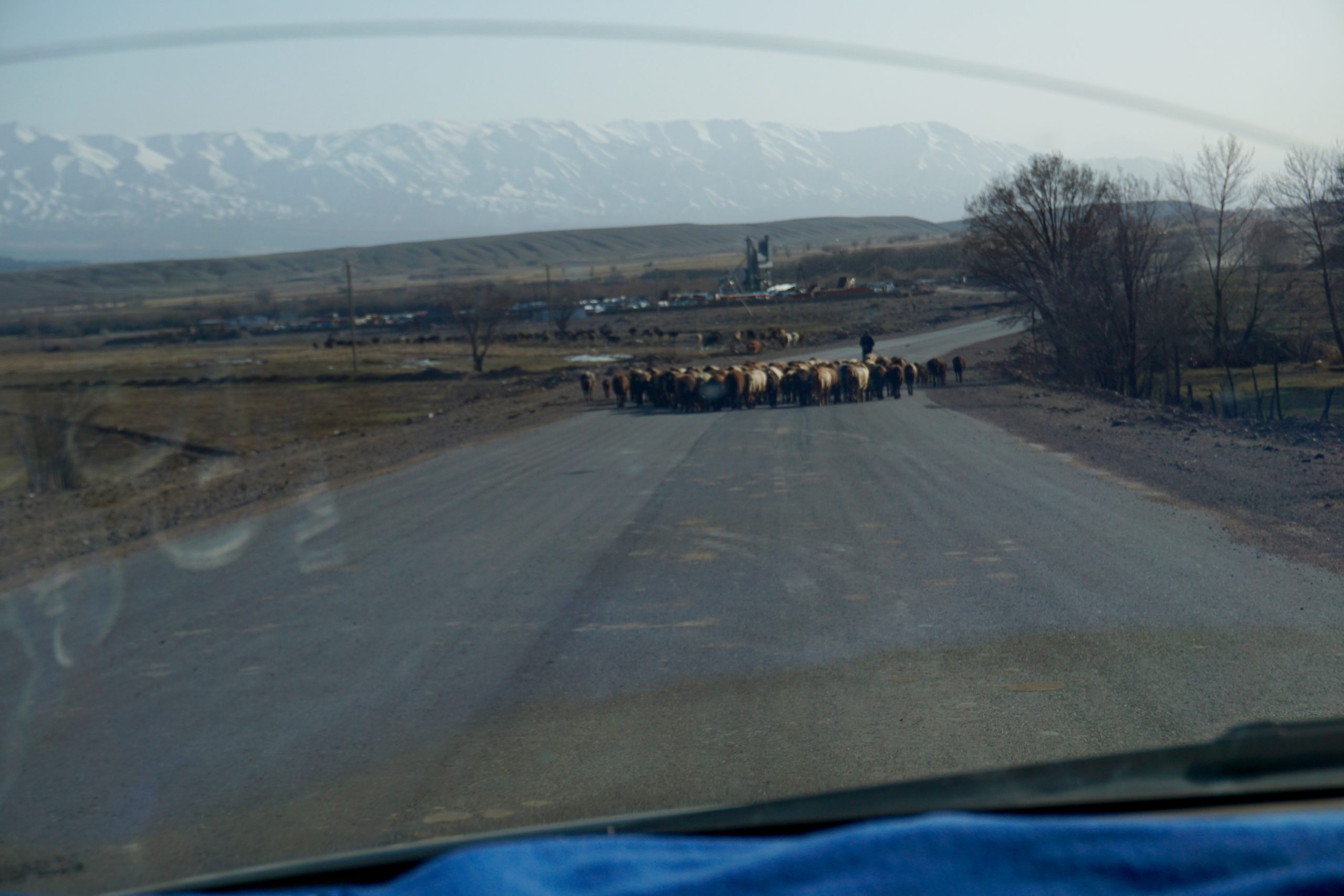 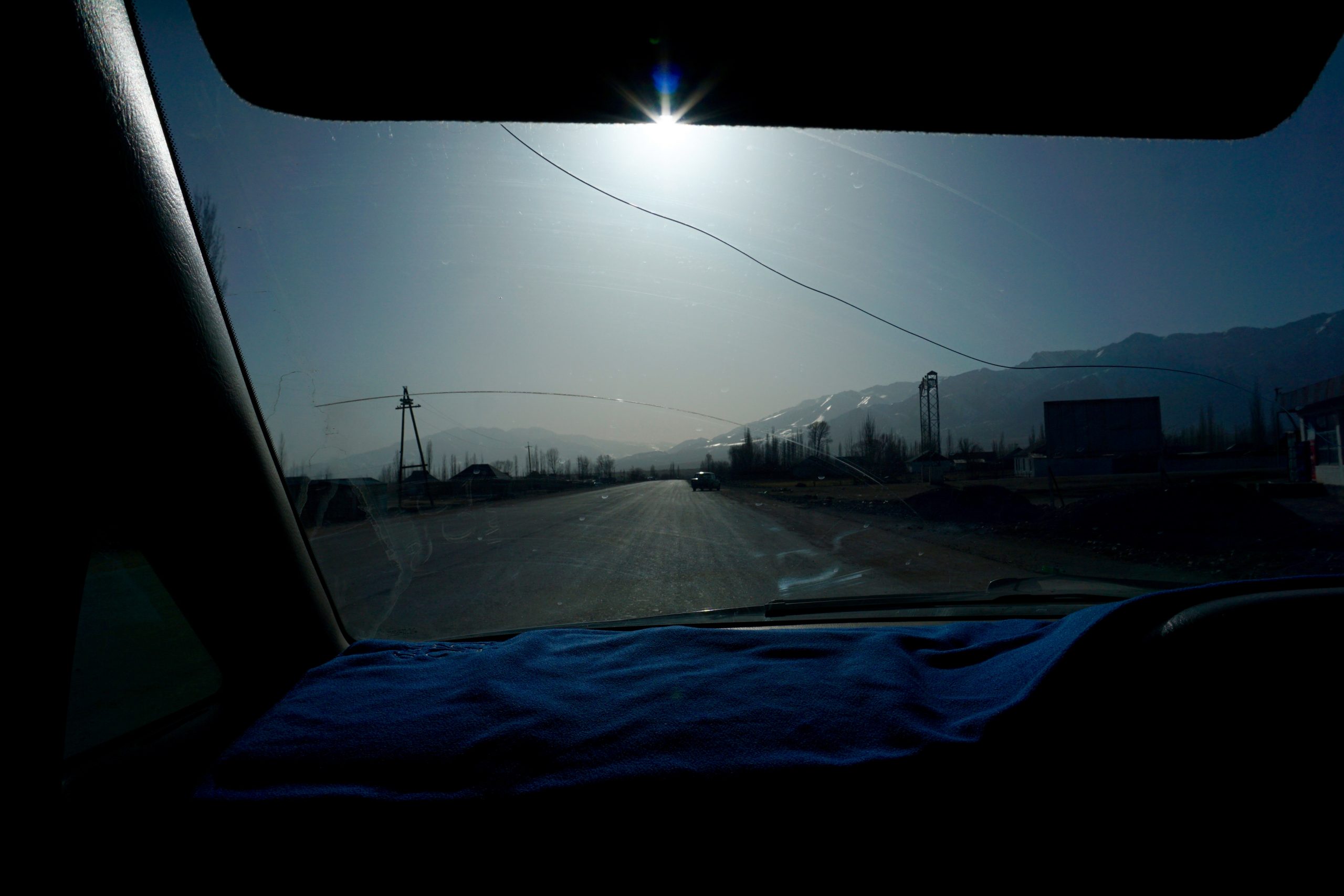 By the way, Ramadan had started. The majority of the Kyrgyz are Muslims, not as devout as others (that comes separately) and not all of them do Ramadan (the farmer’s family did not – but they prayed before the first dinner), but this family did. But it wasn’t really dark yet anyway and so there was indeed the luxury we had hoped for: a warm shower! A fragrant body! Soft clean hair! Fresh laundry! Except for the hair (that was more than a week ago), I could have done without a proper wash for a while longer, but if the shower is there, I’ll gladly take it.

Smelling good, I then joined in the dinner preparation, started crying while chopping onions and got knots in my fingers while folding pelmeni. 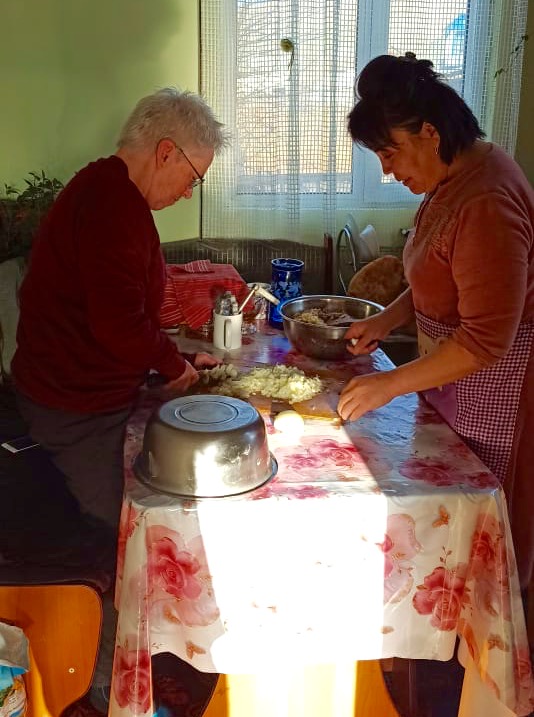 But no matter what the results looked like visually, they tasted great to all of us and a group photo was produced beforehand. Rakhat and I with loose, fluffy hair. The rest anyway. 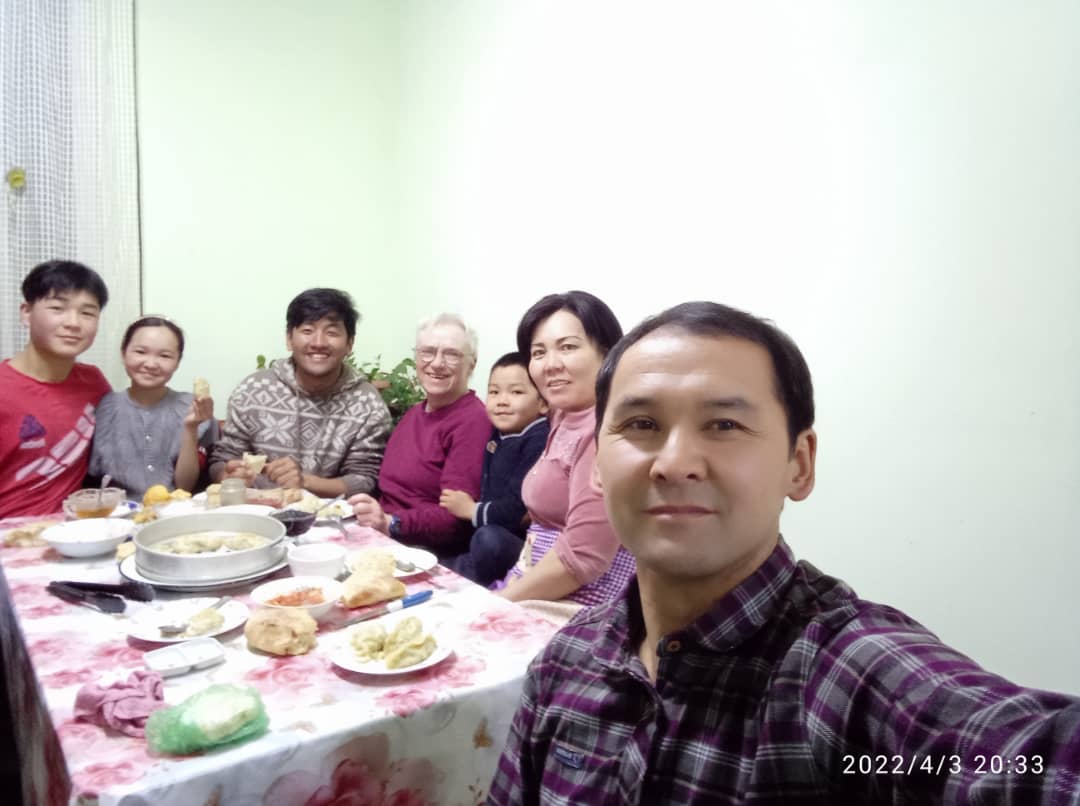 The next day we actually wanted to hike to Son Kul Lake, but it turned out differently. You can read the story in the next post.