Karakol is ideally located for excursions into the surrounding area. It was cloudy and actually not the most favourable day for visiting the red rocks, but I had such a desire to roam around in the landscape that I drove anyway. It was a few km along the south side of the lake. Another observation: almost no matter whether I took a taxi or a marshrutka, the first stop was always a petrol station. I like to take public transport, but for this destination it was not so clear when and almost if I would arrive where I wanted to go, so I took a taxi. 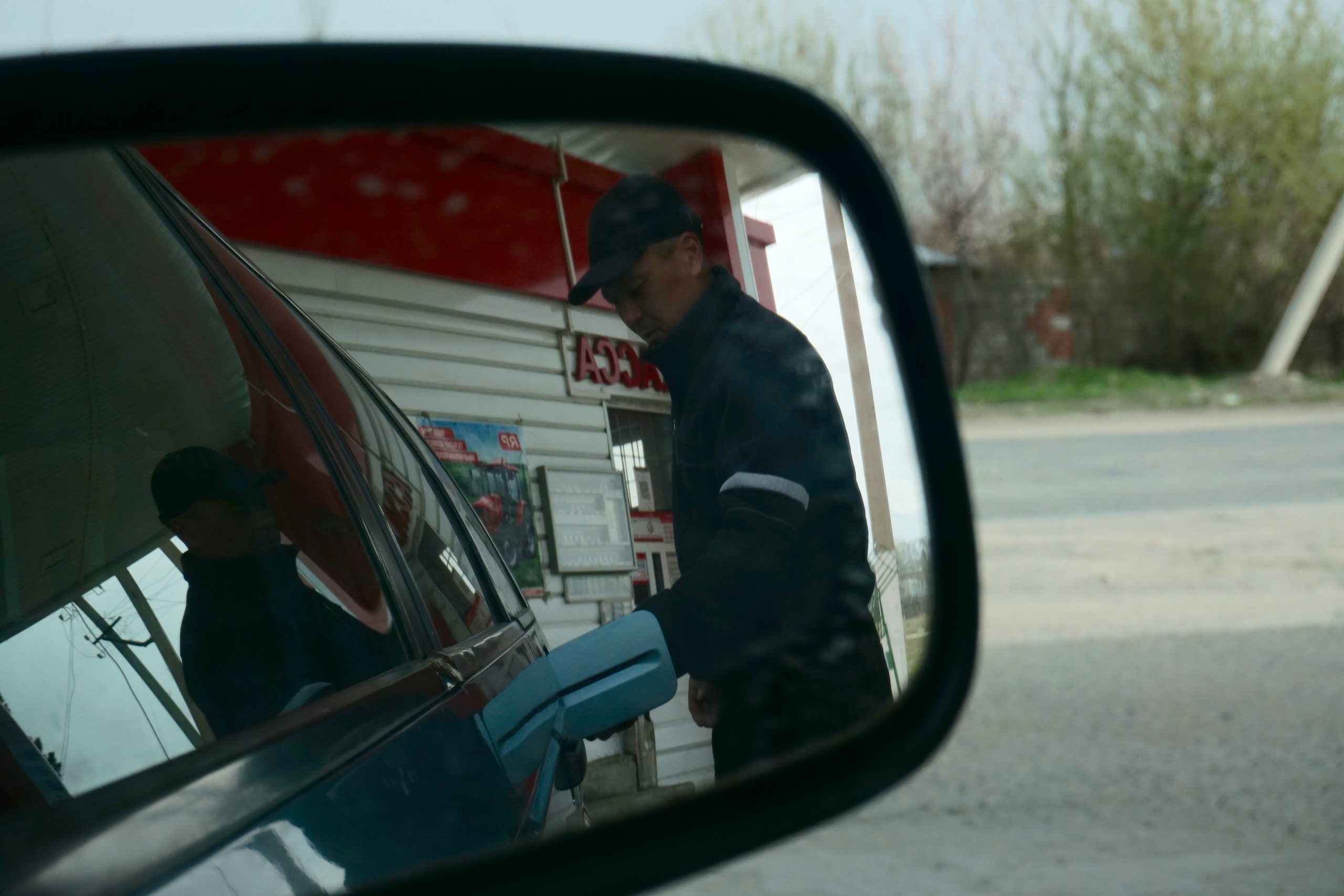 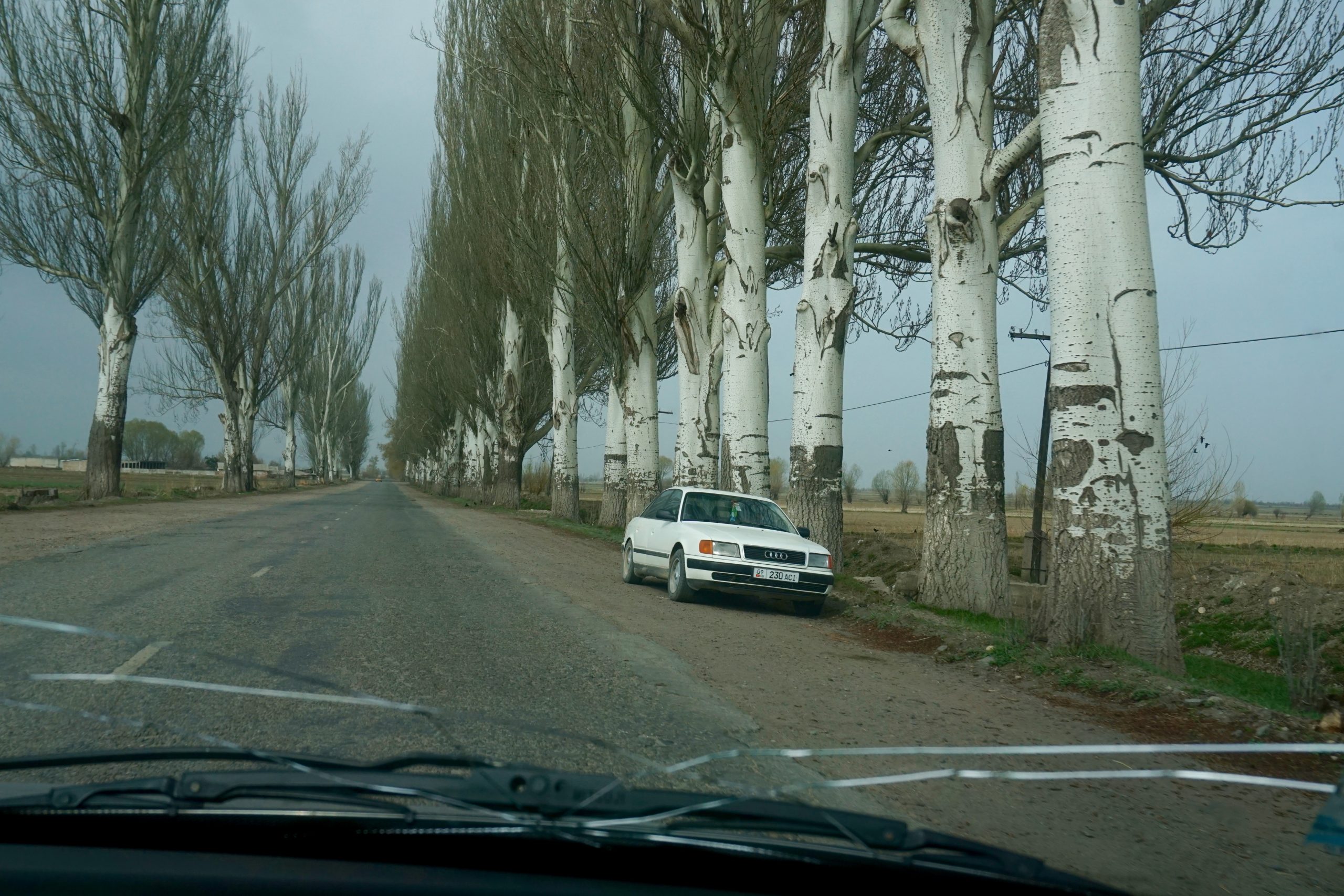 The first destination was the famous red rocks (it is best to search for more impressive pictures using the image search function). These are located inland at a small place called Jeti-Ögüz Kurort. Actually, an overnight stay there would have been appropriate, then one could have done both: roam around the rocks and hike to a waterfall. I decided on the waterfall. The place seems almost deserted – it’s at the end of the decent road and there’s a sanatorium there. I don’t think it’s in operation any more. There are a few small houses/farms around it, but I didn’t see any people at first. Except for a big group of tourists! They were more than 10 people, came from Spain and travelled around self-organised. Due to the low number of tourists at the moment, you are quickly amazed when you see some. They also wanted to go to the waterfall and I met them again later. But first, here is the place and the rocks. 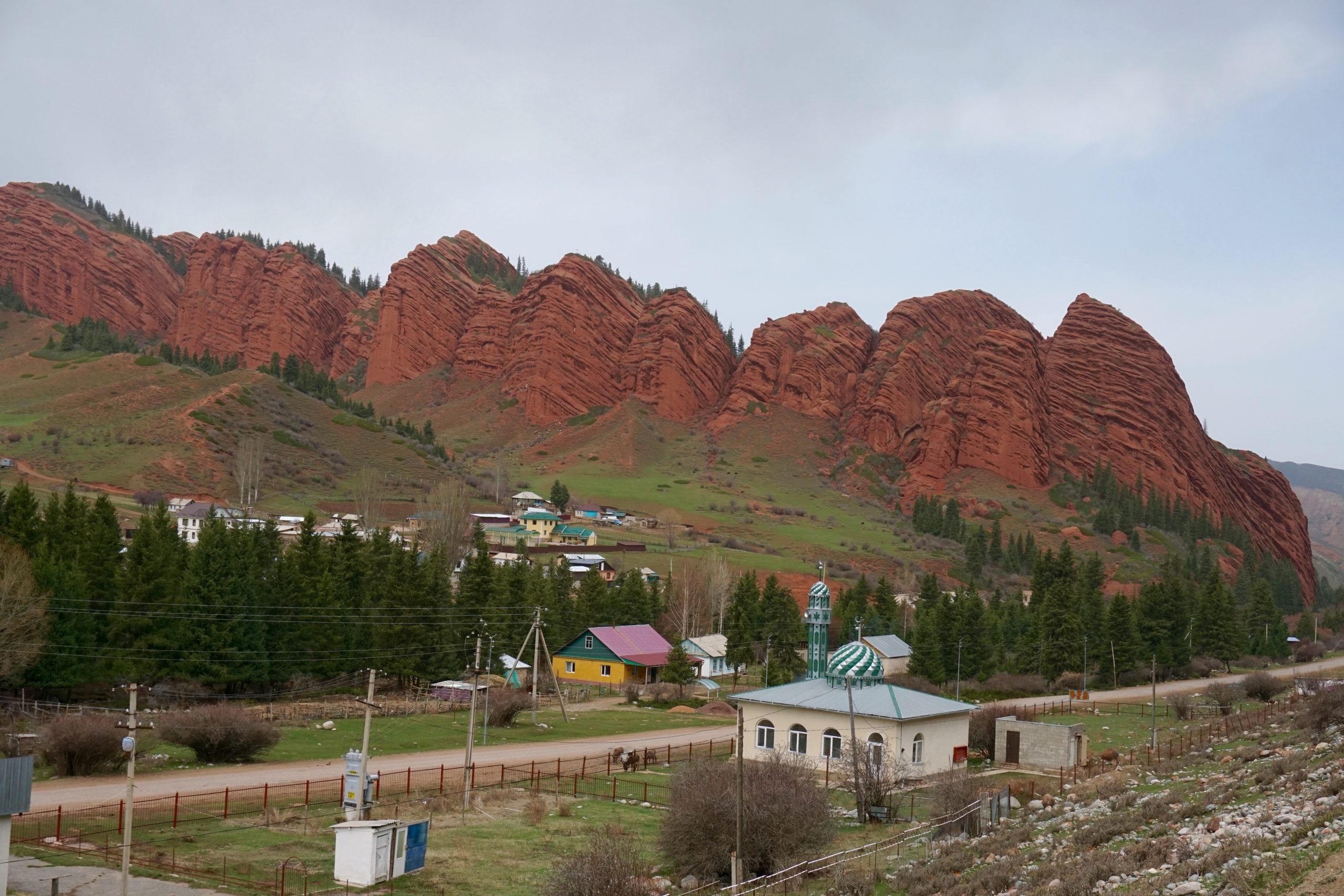 The road led further into the mountains as a gravel road along a river. There was a bit to see on the left and right. 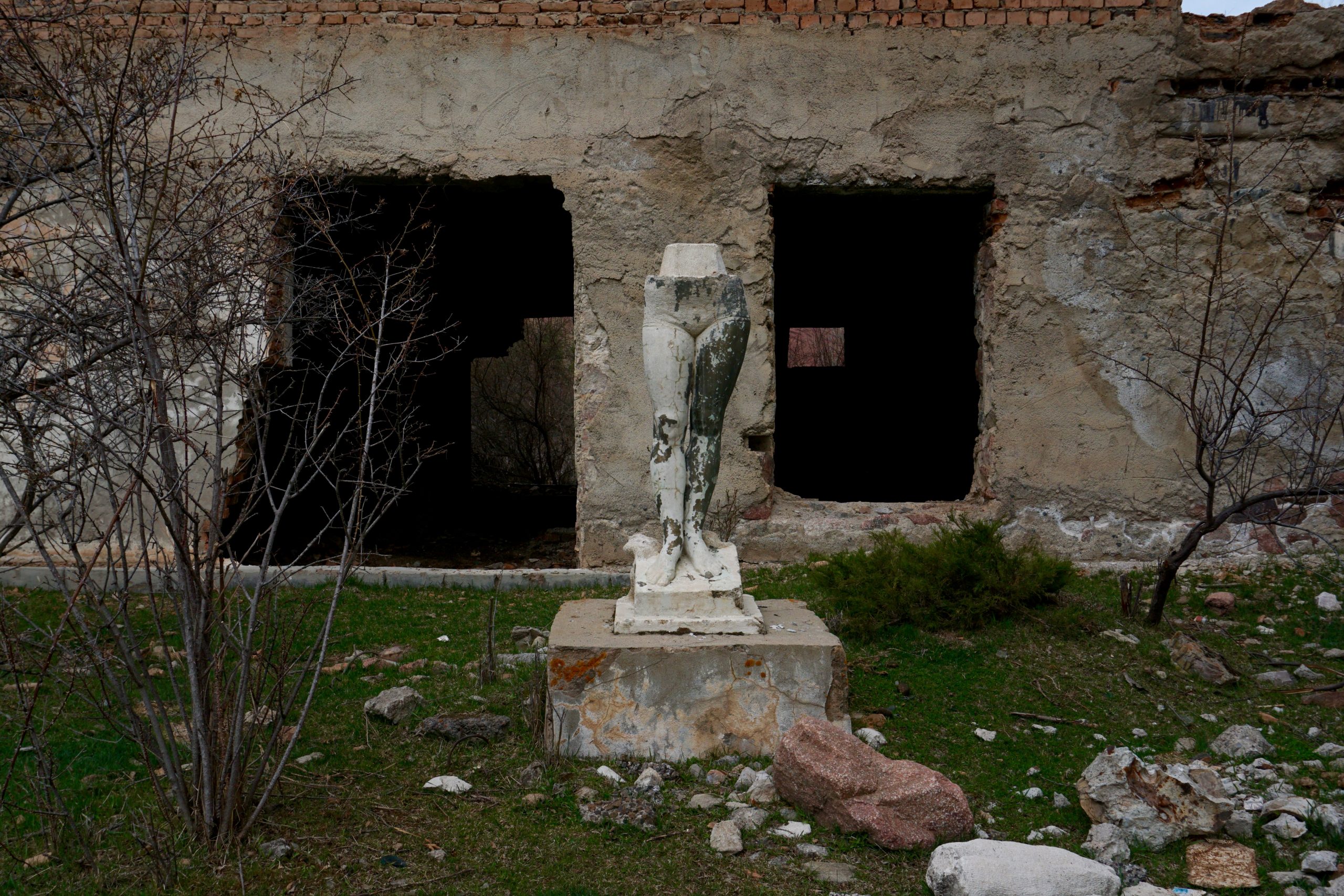 half statue with underwear 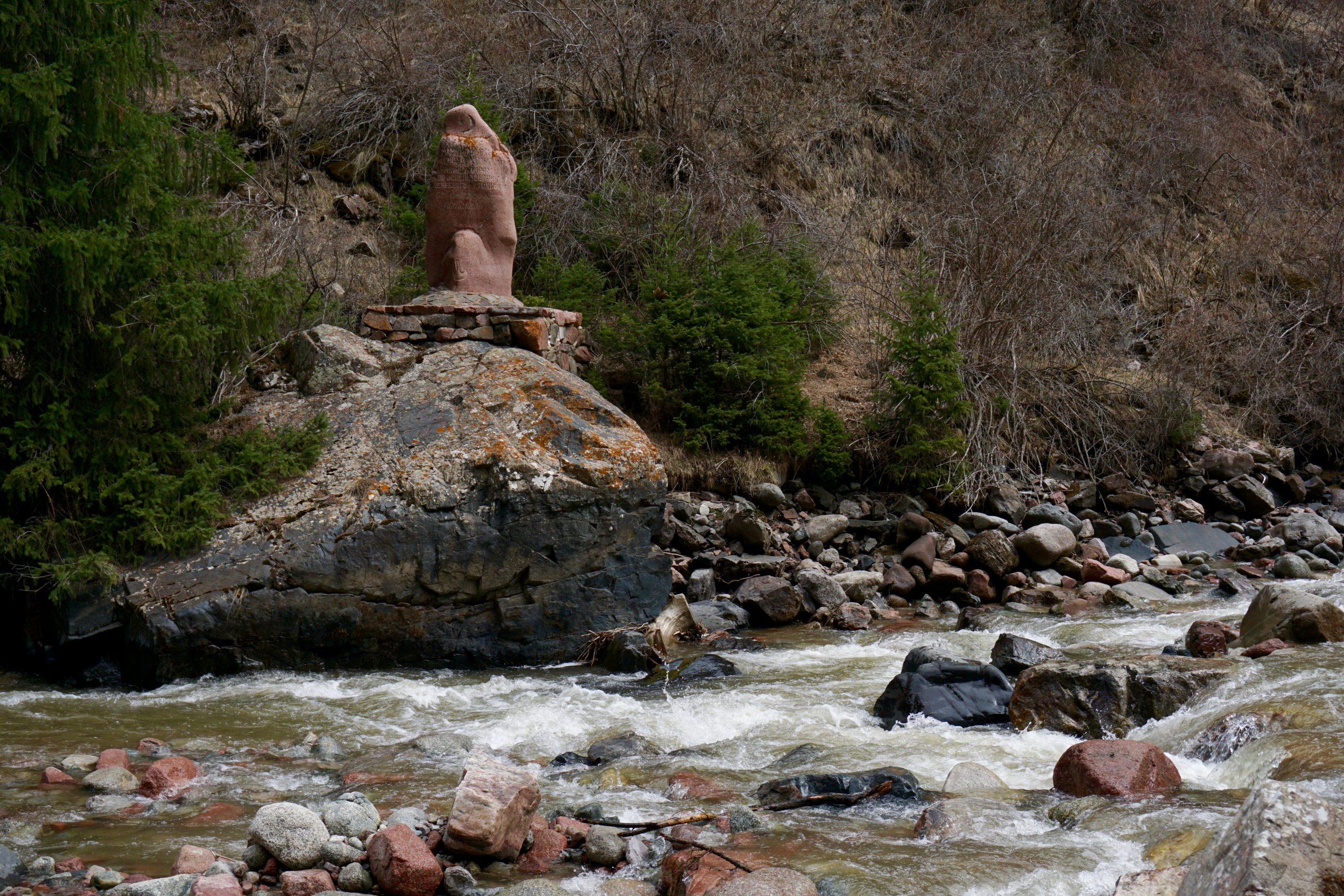 artwork on other riverside

The path climbed gently and after a while the valley opened up and the first meadows appeared. There were abandoned stalls there. There were also many of them to be seen later – it seems to get quite full here in the season. But now everything was still deserted. 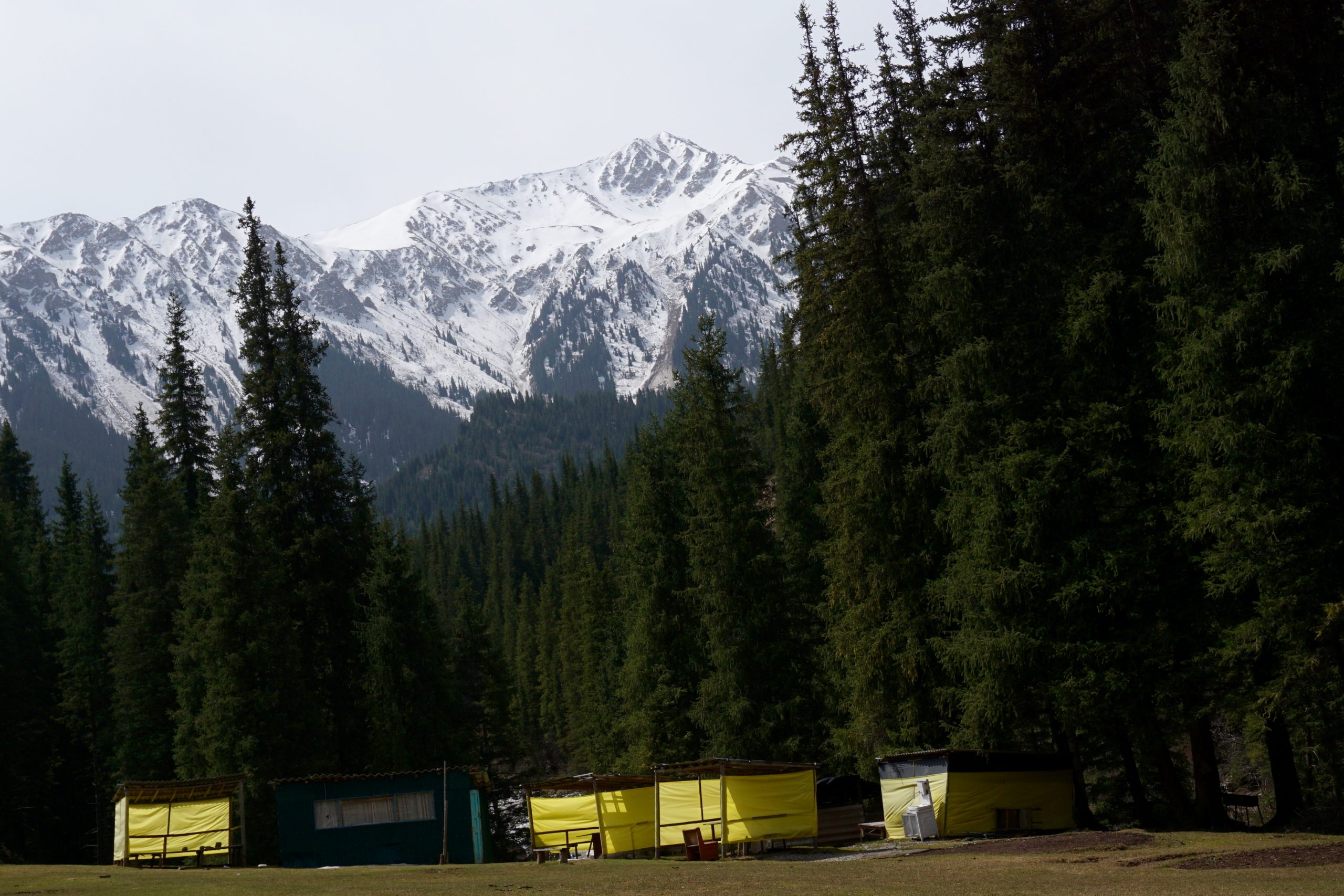 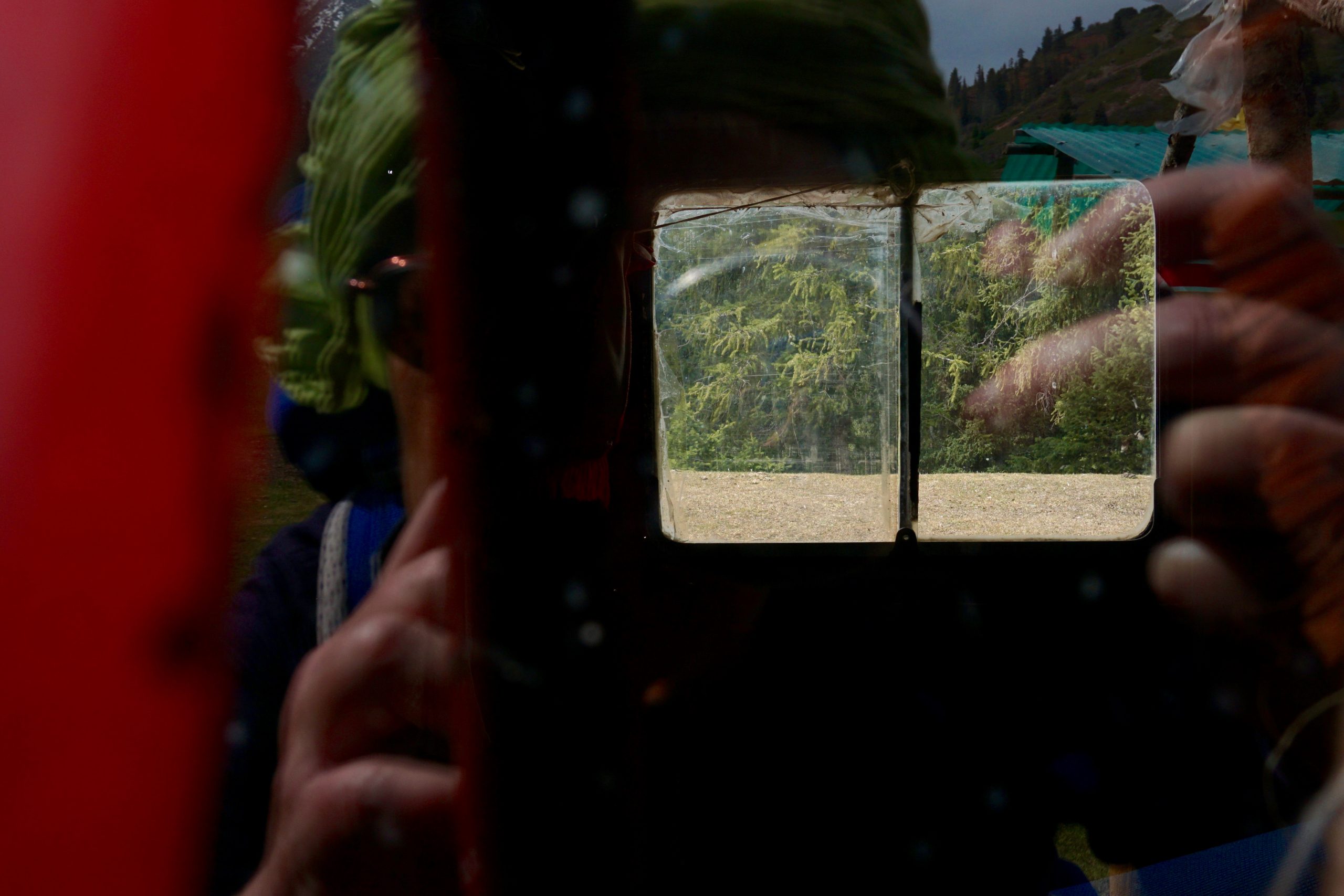 They also call it above here Valley of Flowers, but I was a little early, could just spot these: 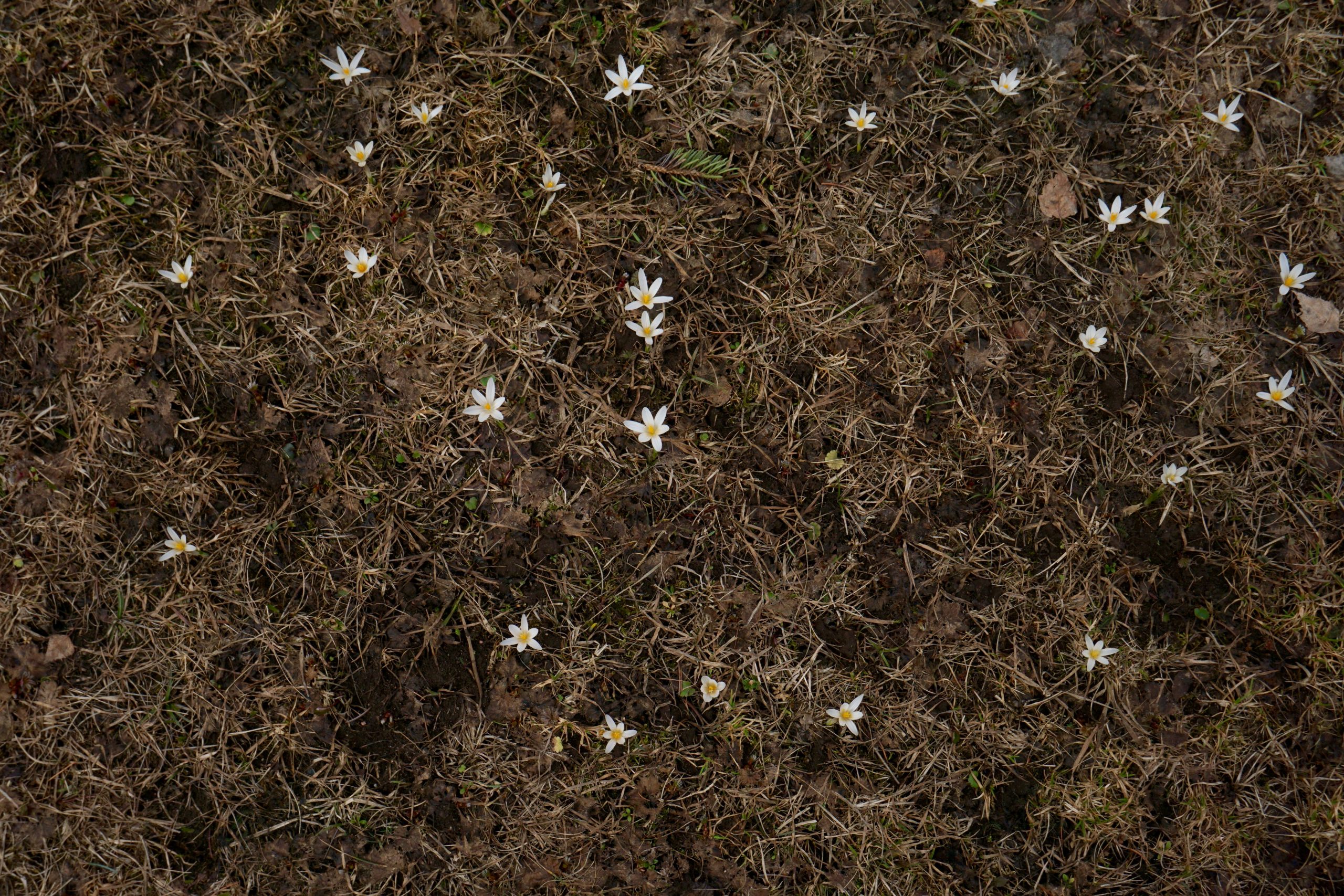 It seems to me that there were and are afforestation programmes, where they plant the trees in neat rows and it looks like this: 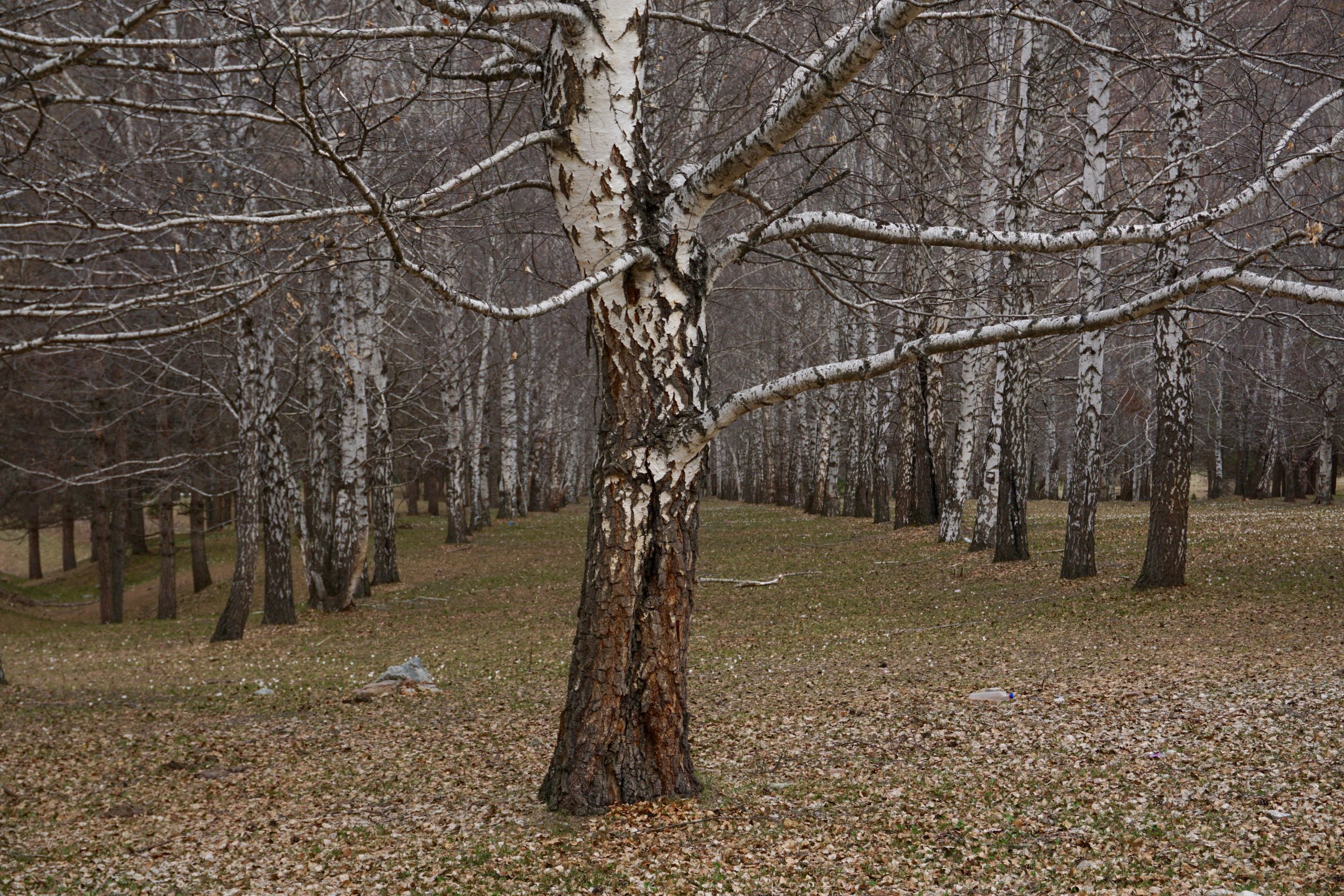 One could climb higher and higher and has a great view down. Mountain landscapes often seem quite similar to me, they actually look like the Alps. But no matter where, they enthuse me everywhere and it is the details that remind you that you are further away. 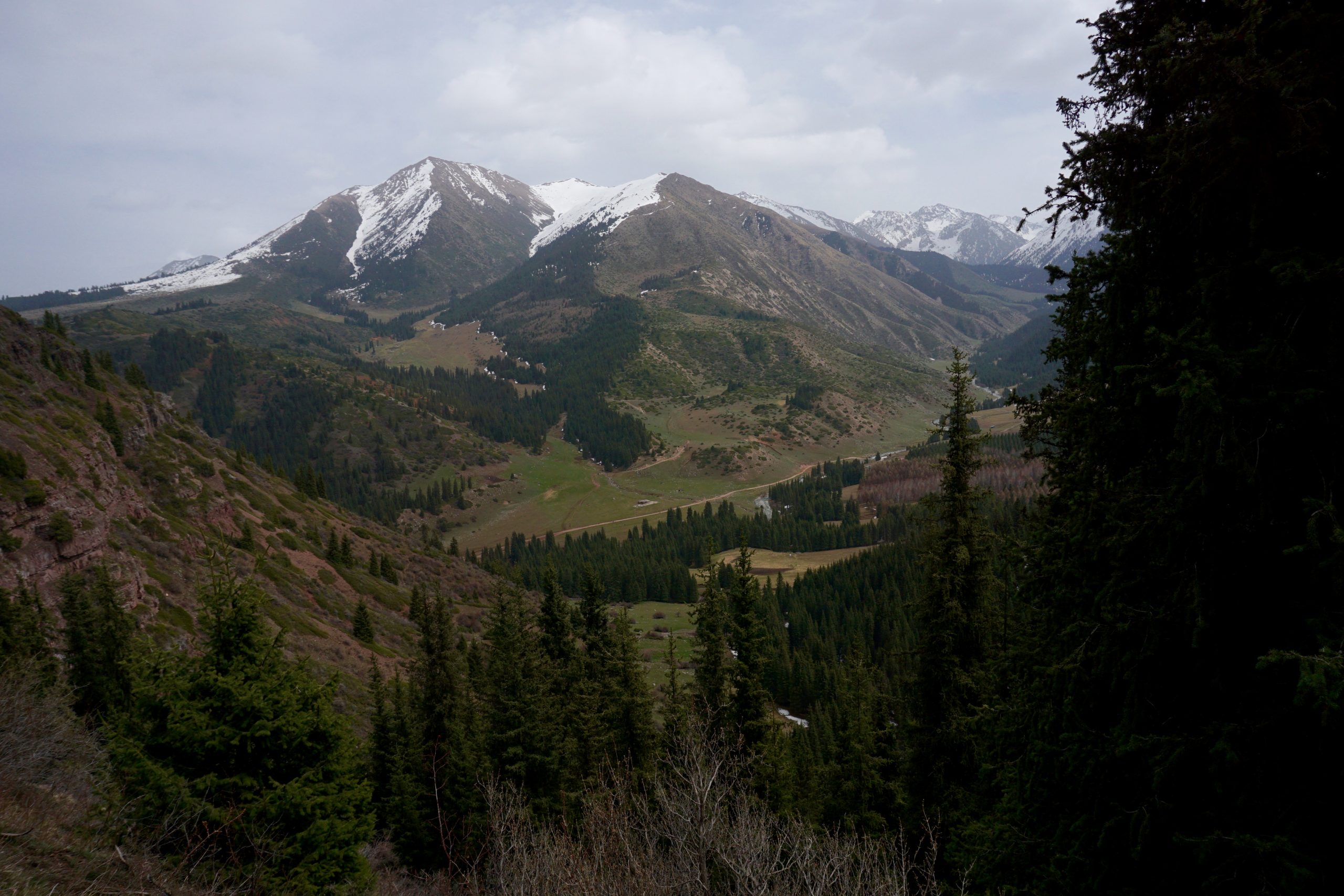 I guess in summer the excursionists step on each other’s toes, already that day I met more people than the Spanish tour group. However, I have no idea how many of them are locals who also like to walk around in the mountains – without herding animals or anything. 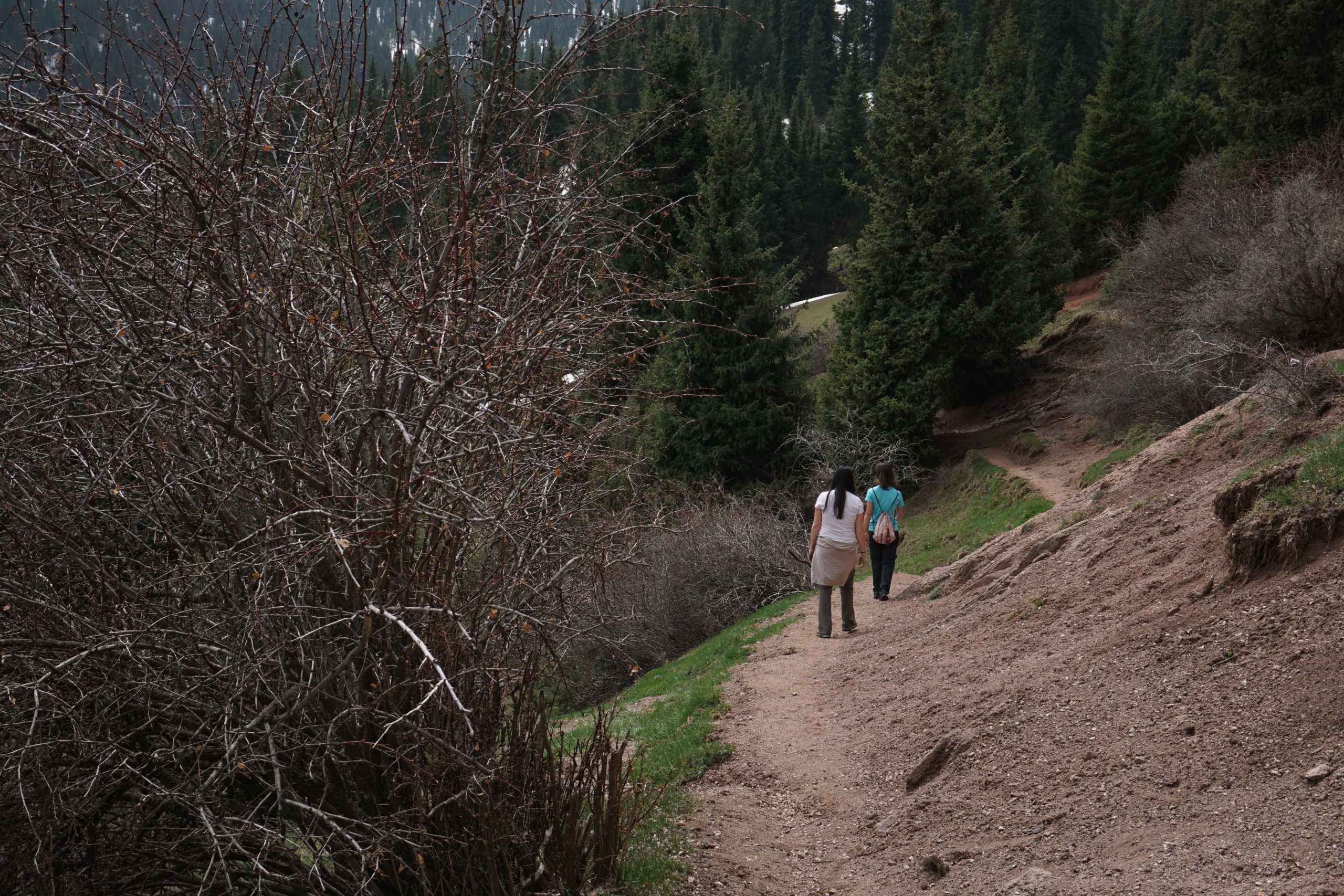 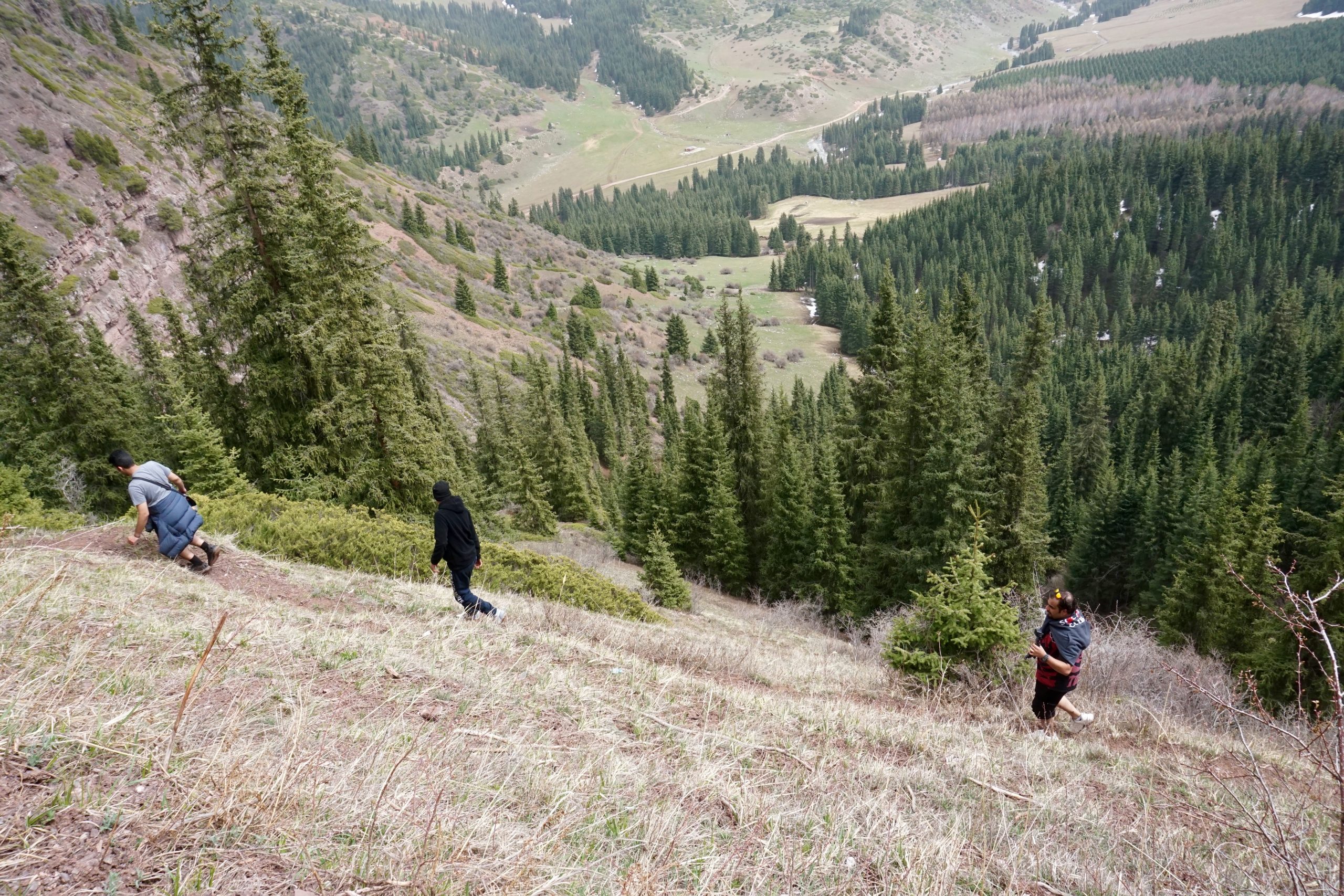 In principle, I’m not a big fan of waterfalls. They’re too loud for me. But I would have felt stupid not to look at this one. And I was very lucky: it actually left me open-mouthed in amazement. It looked really fantastic with the ice on the left and right and above. Of course, it was still loud. 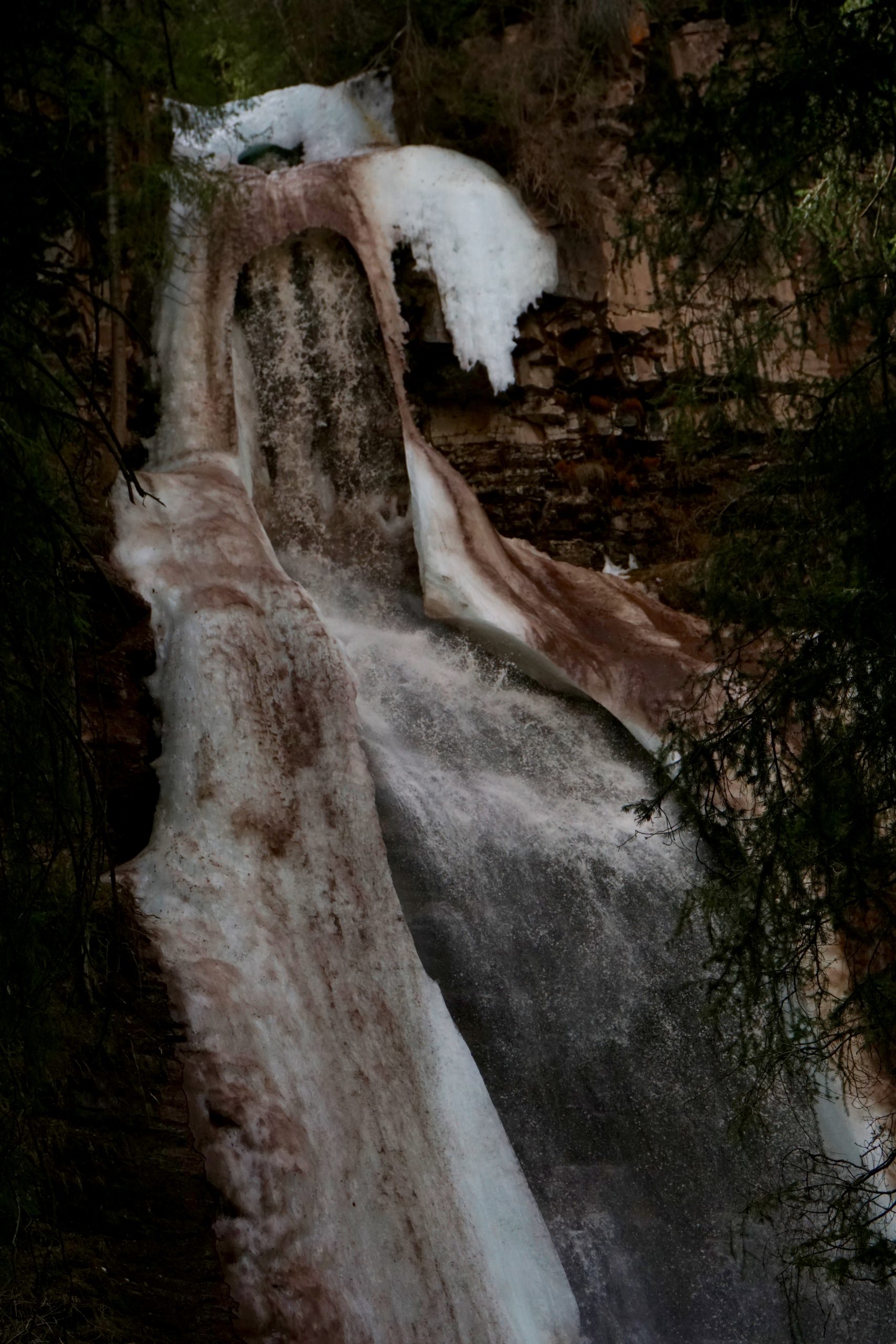 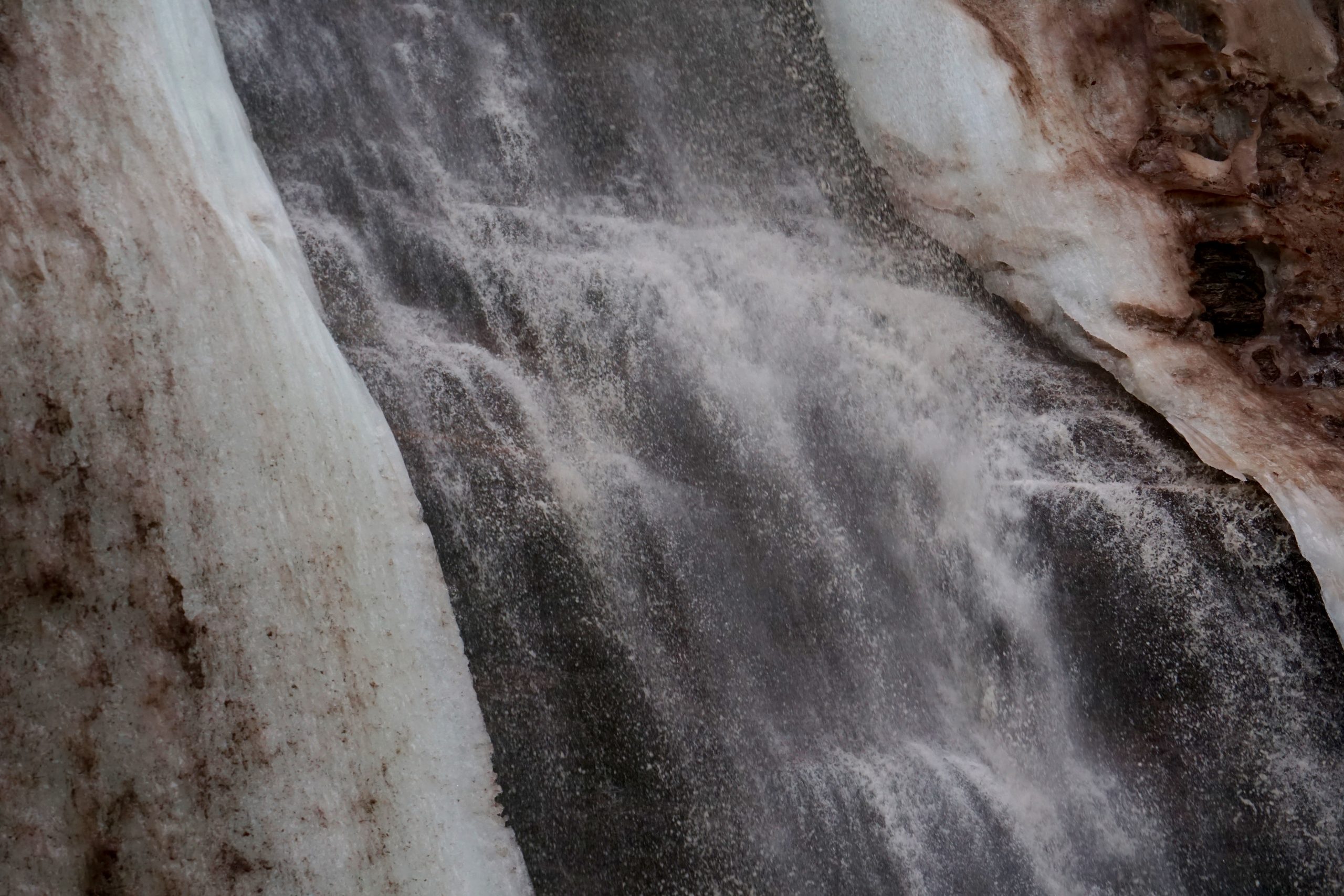 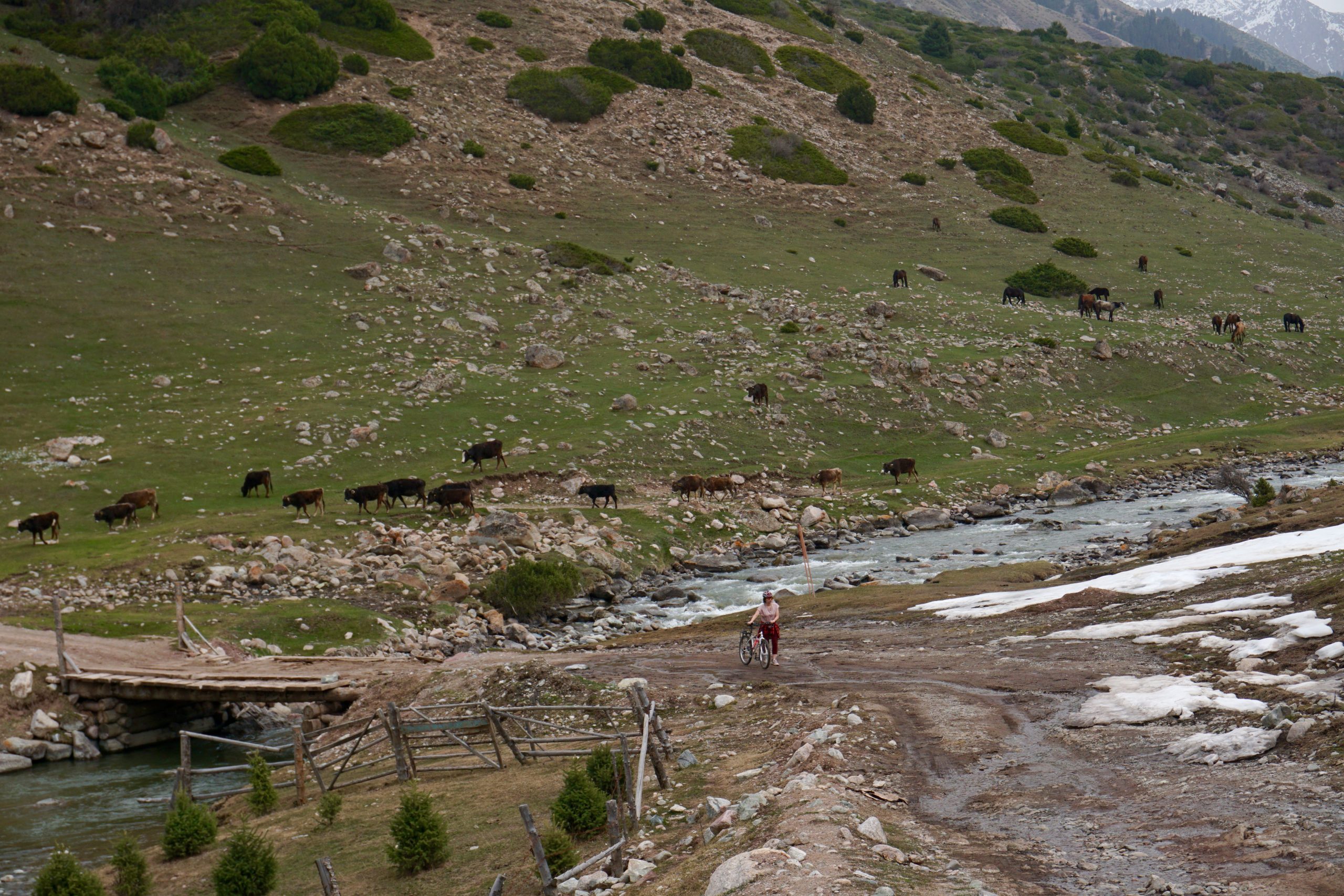 cows and woman with bicycle

So there were many cows going up 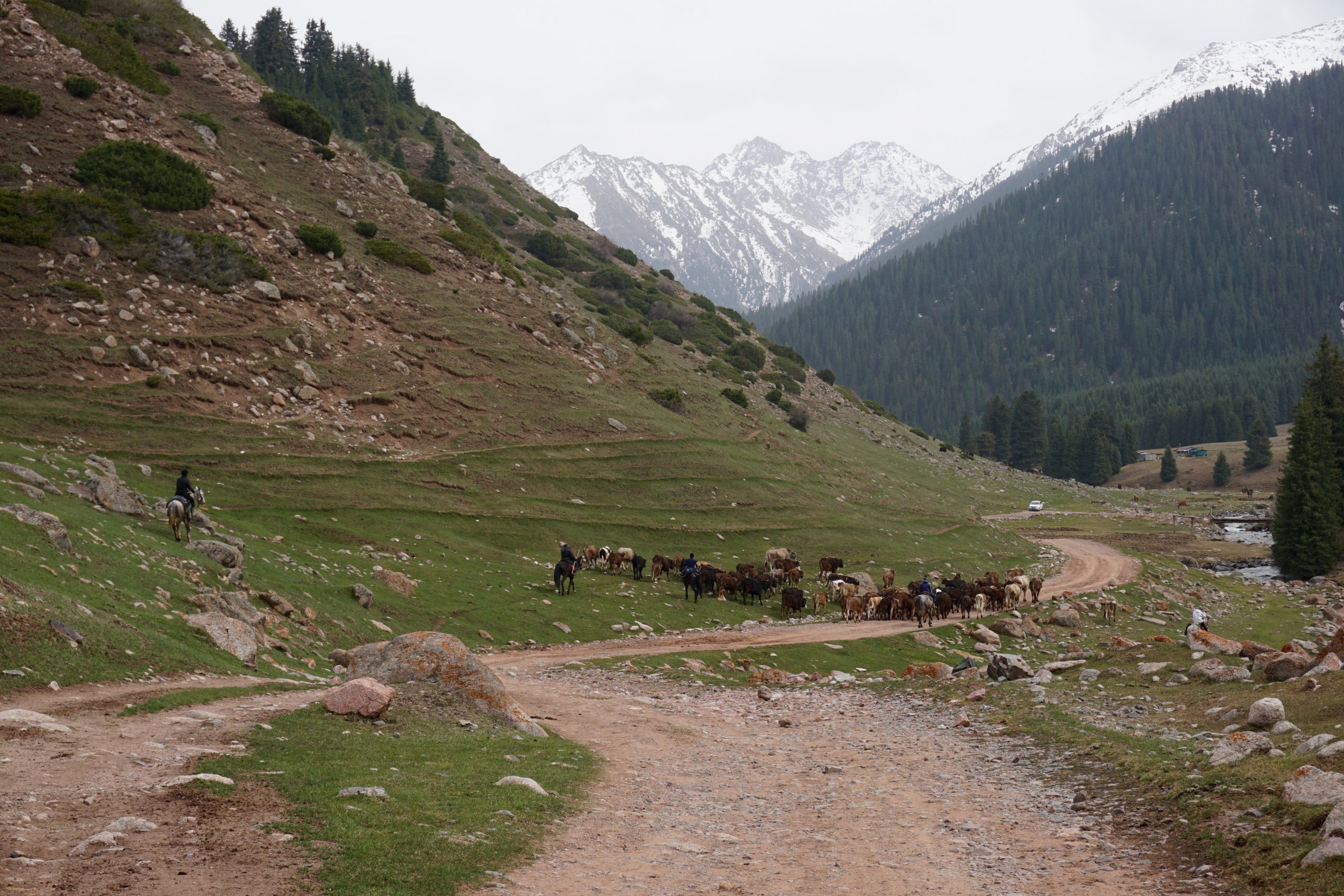 Some cows were not quite so willing to wander. Cow dung often looks like almost diarrhoea. On the way down, however, I came across some patties that really looked like diarrhoea. This cow lying around was first maltreated with feet, then with a bigger stick – until she jumped up and trotted on. 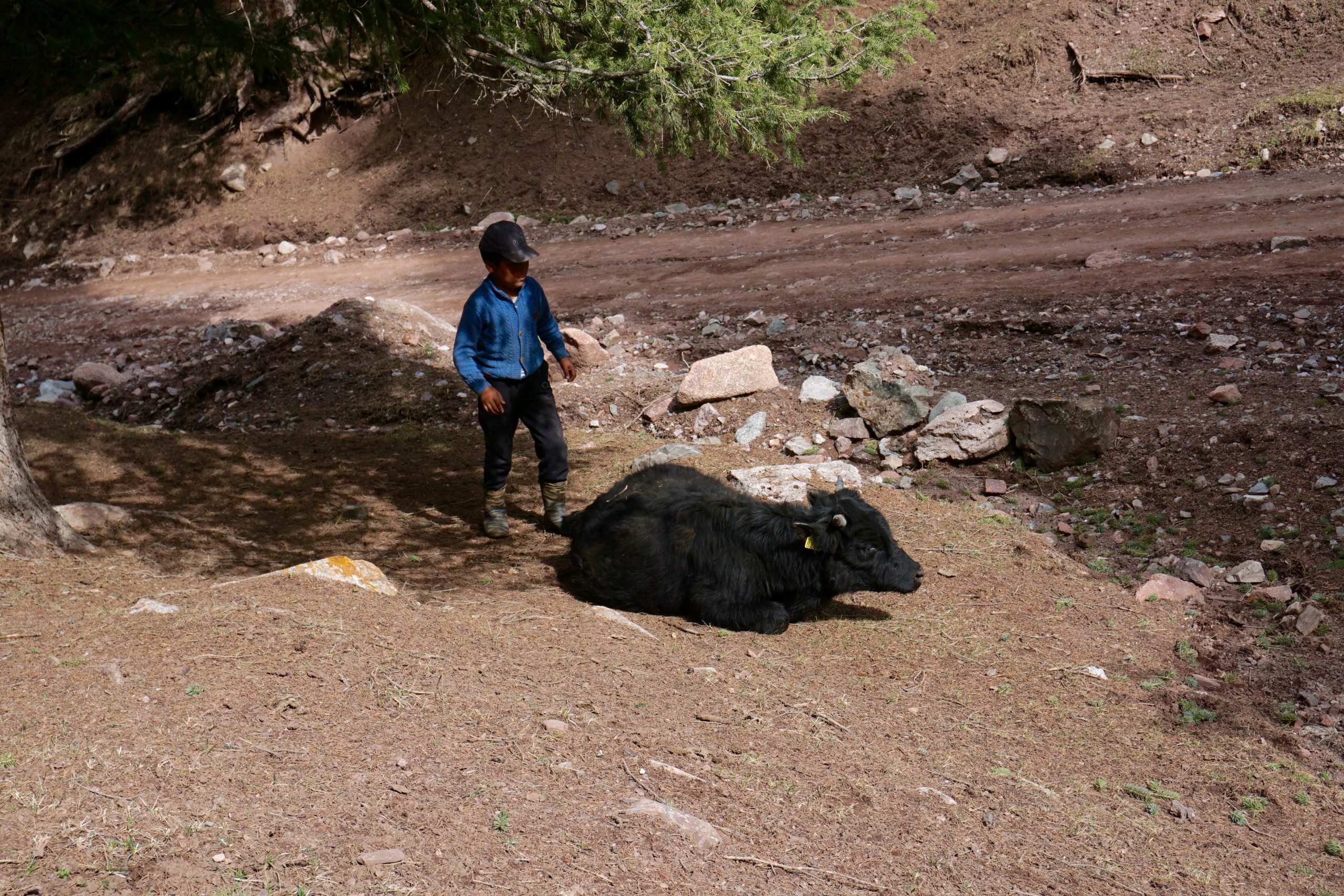 With some cows they had more understanding and hoisted them onto a loading area. They were not really willing and the men had to help them along. 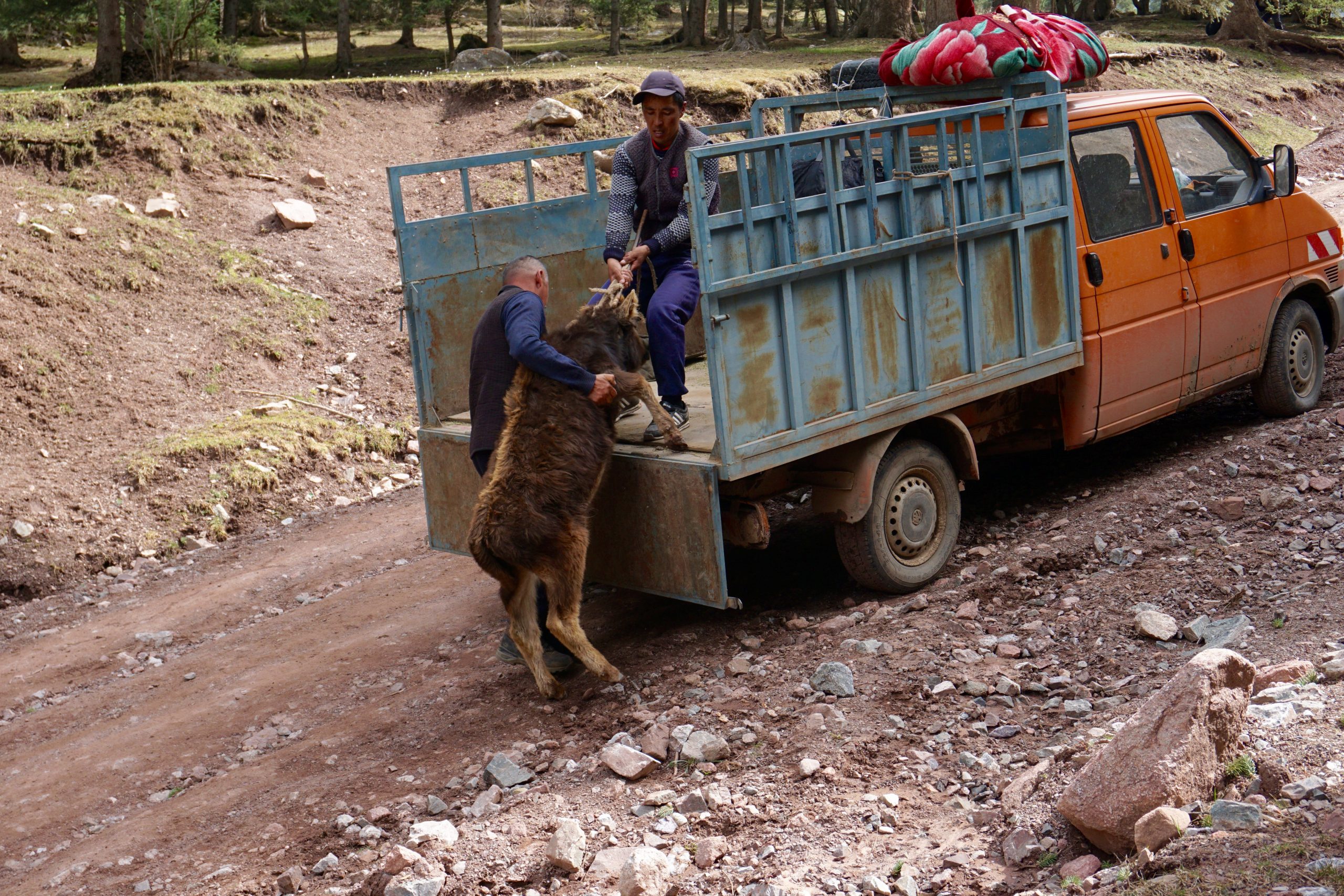 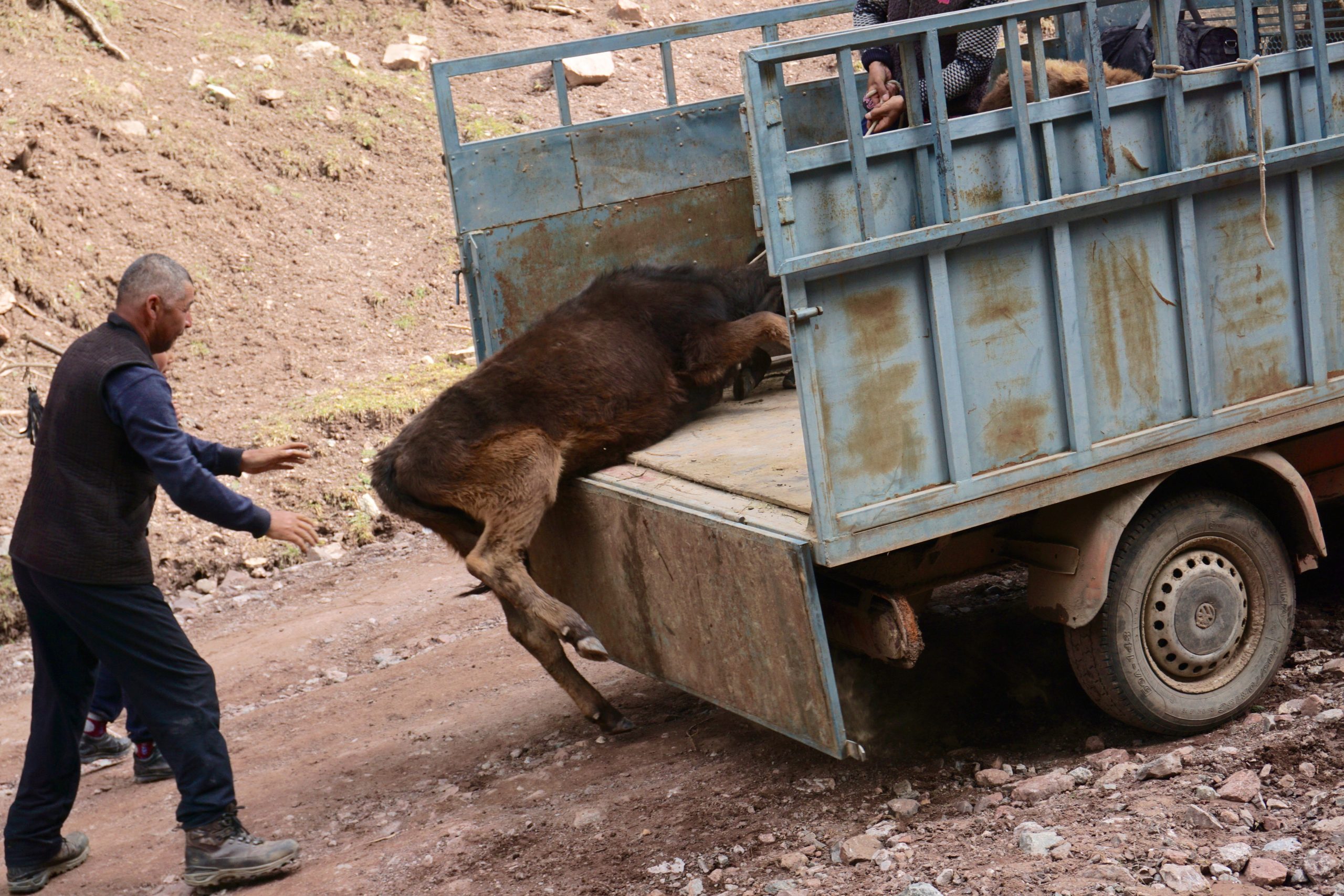 Cow 3 was quite stubborn, but the boy had enormous strength and skill. 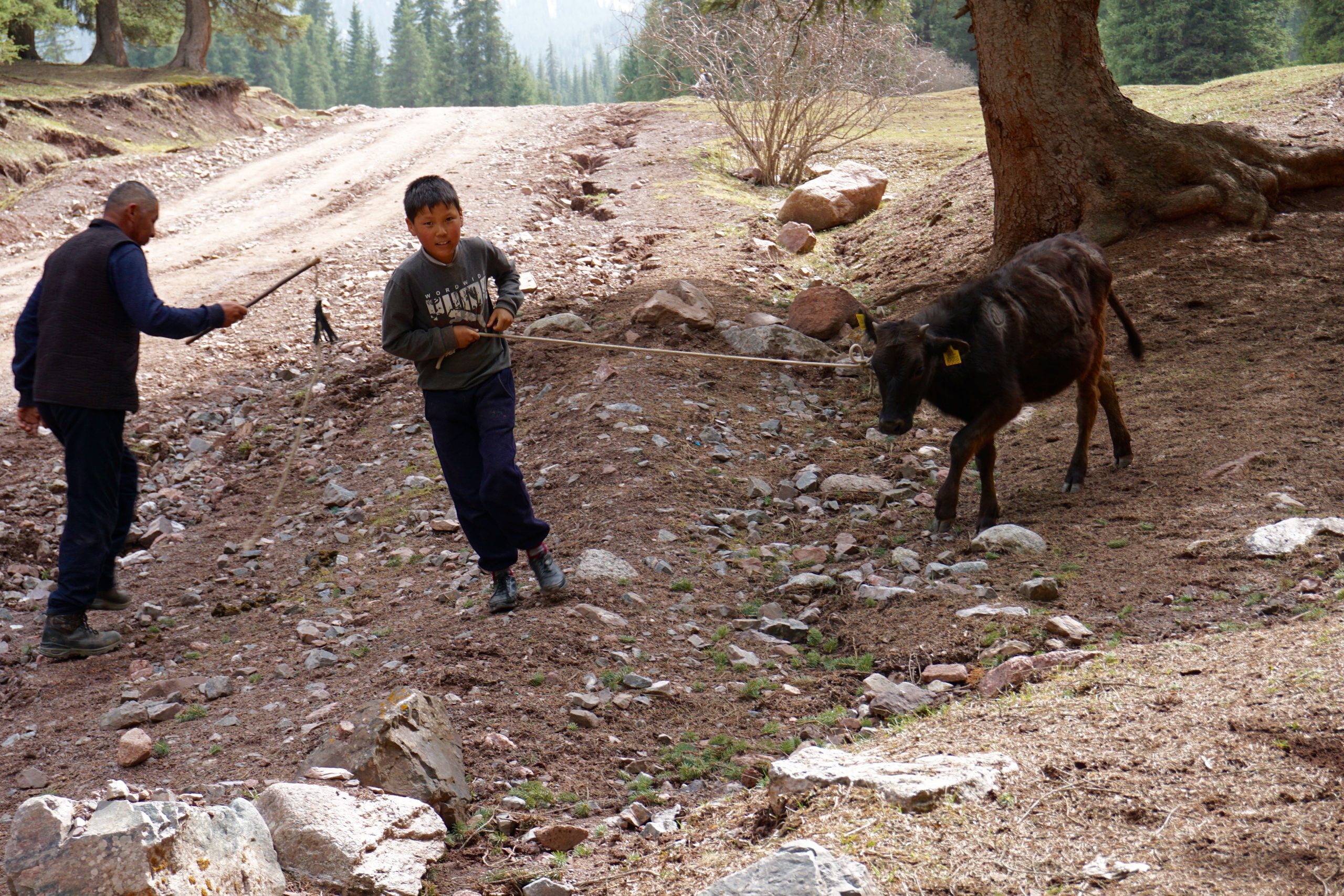 I stopped watching and thought I had better hurry to get back in time. I didn’t meet anyone on the way up, but on the way down I found the track quite busy. There were also people busy repairing a bridge. 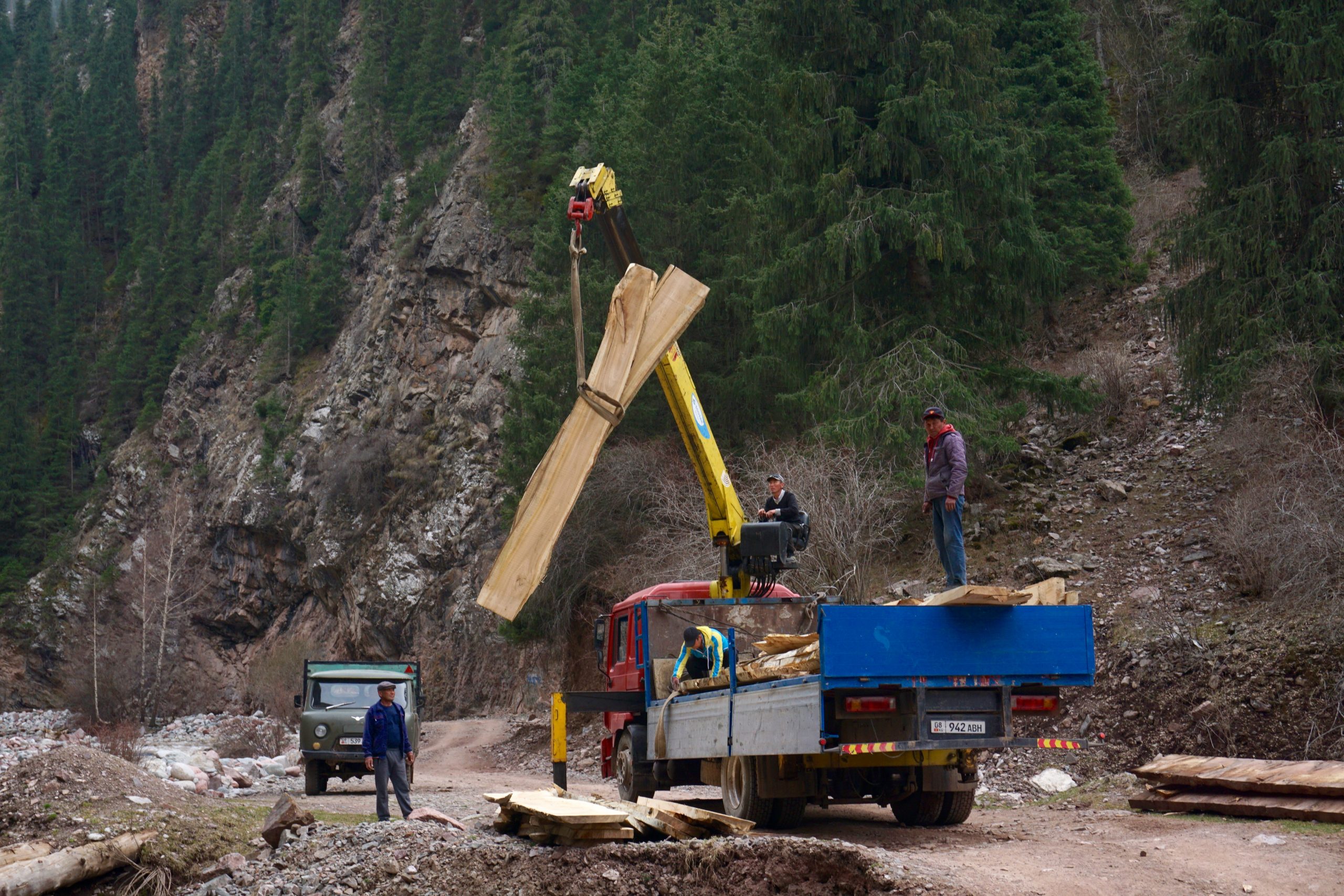 A bus announced for maybe 16:00 was not there and it looked extremely deserted and I thought about calling a taxi – but a car came by and gave me a lift. Later, we picked up a woman who immediately gave him some change. So that’s how it works: hitchhiking for a small fee. And near the big road there was also a marshrutka and I got back to Karakol without any problems.

Visually, i.e. in terms of the photos, this day was not a highlight, but in terms of nature and the experience, I liked it very much.

And which excursion did I go on the following day? Next blog post!