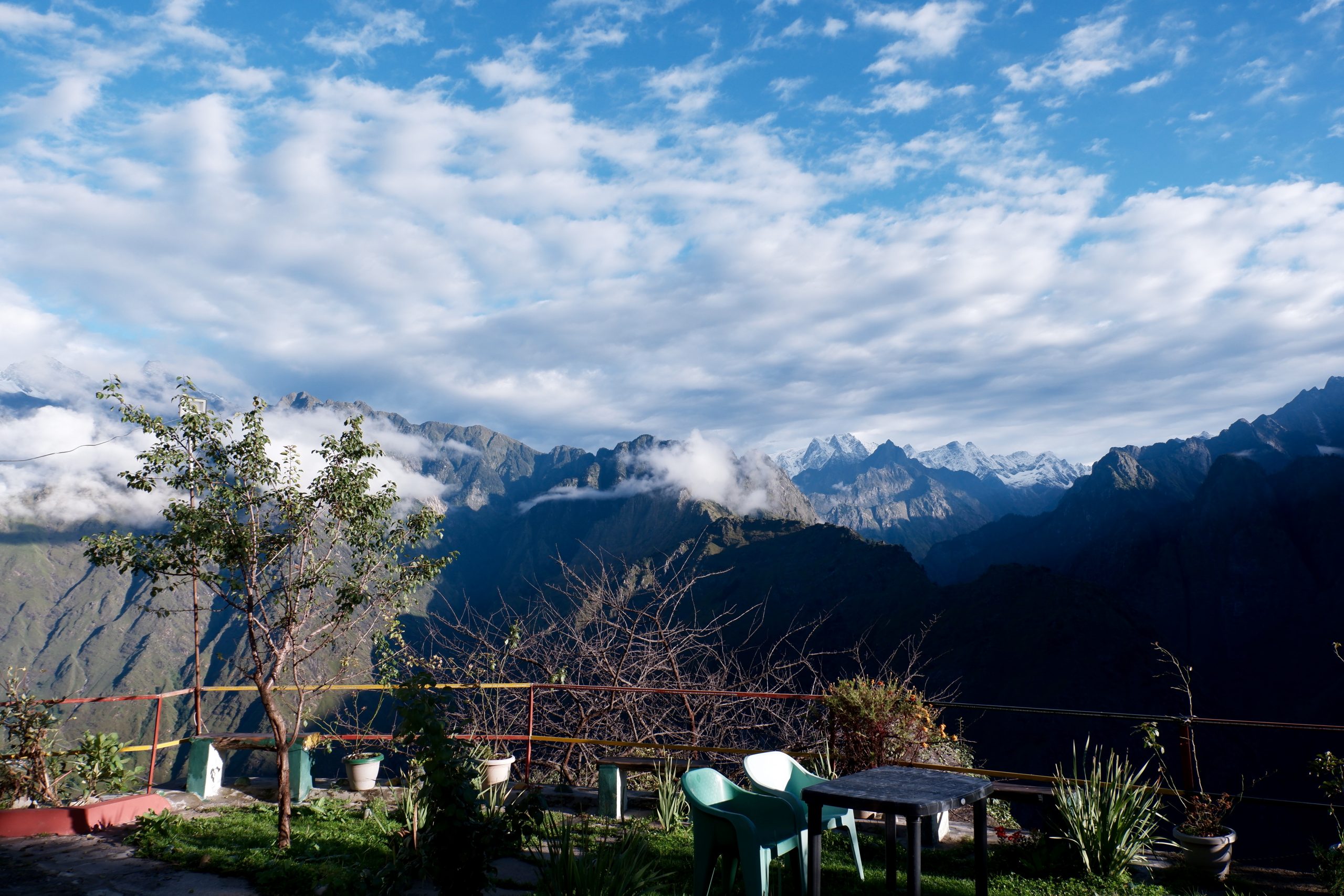 Incredible! The sky was actually blue in the morning! The world looked completely different. 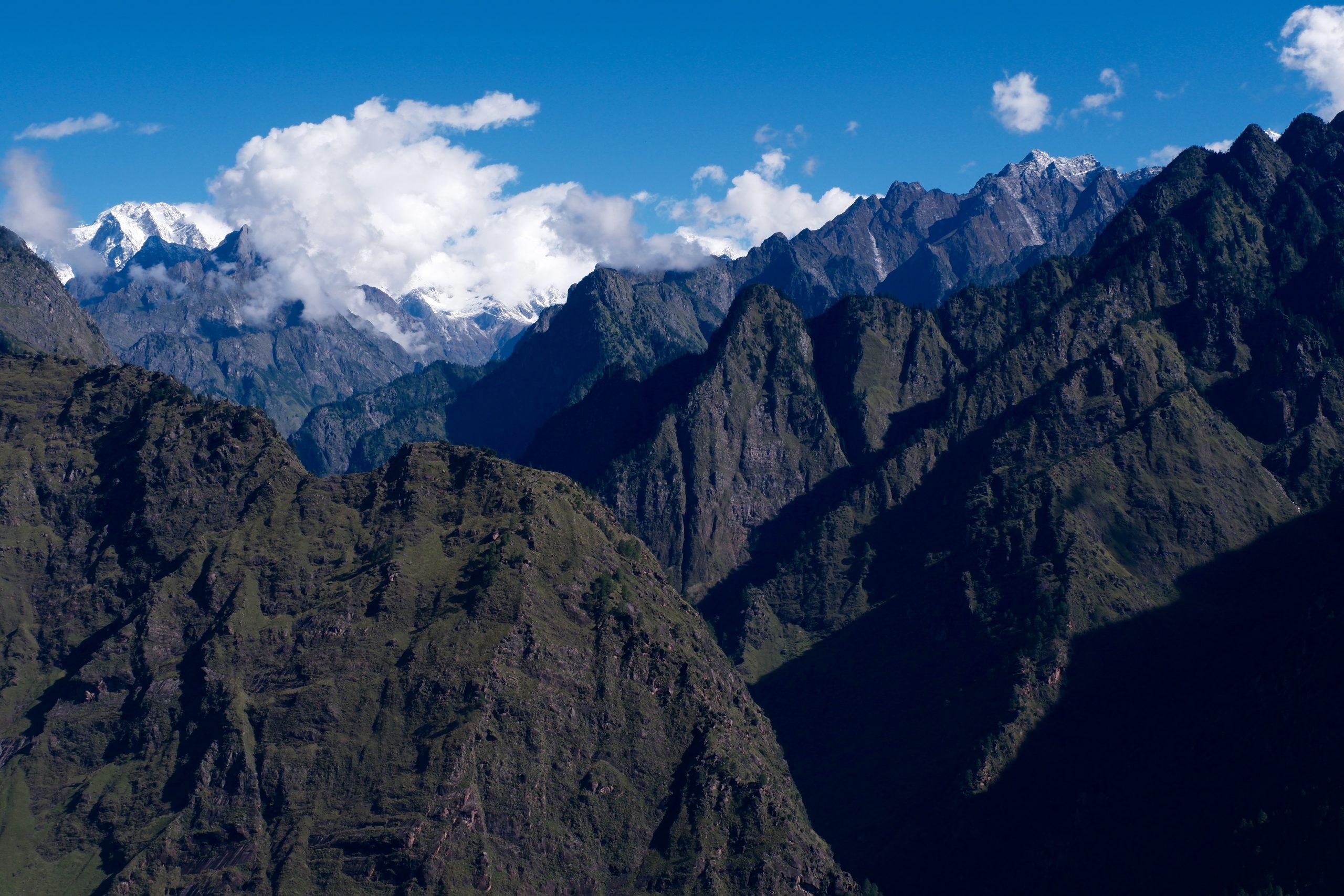 So we quickly packed, had breakfast and hopped on the bike. First we went down in curves so that we could cross the Alaknanda River. Luckily we were on the road before the big rush and the bridge was almost empty. 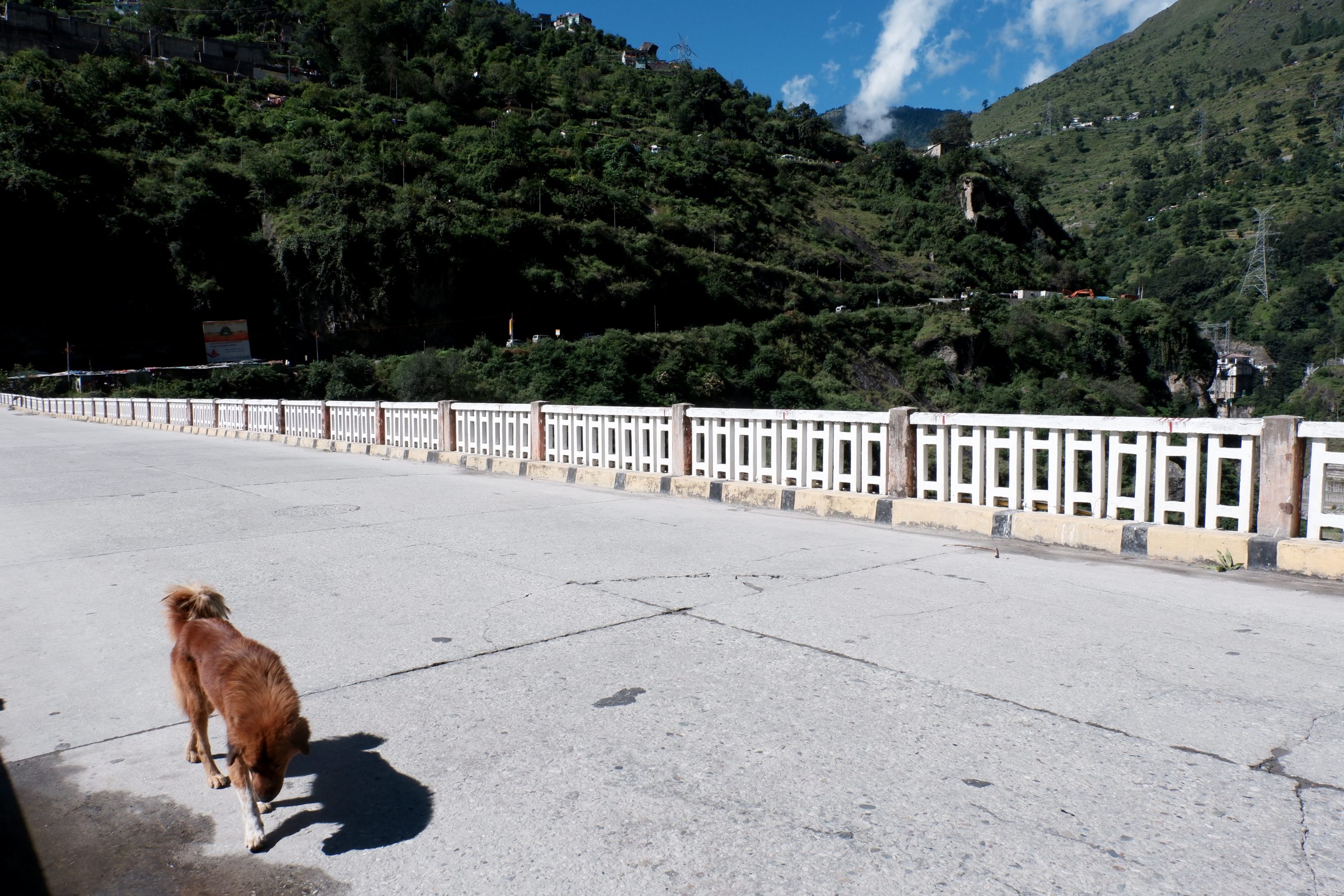 There was a tea shop right by the bridge and Binodh was able to check something on the bike next door. However, the people weren’t ready to jump right away, but engaged in the mobile – it was supposed to be about money. But we got everything after all. 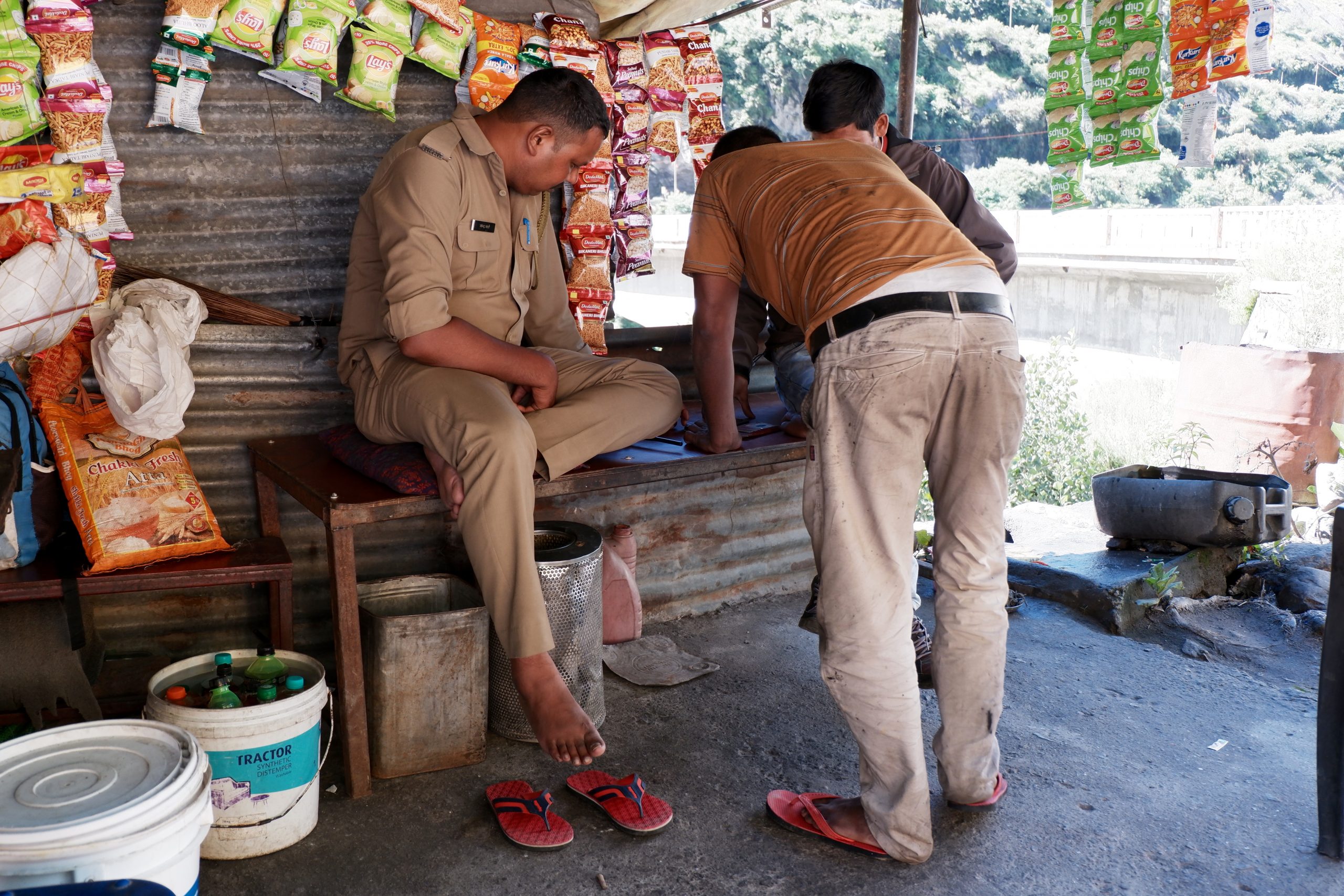 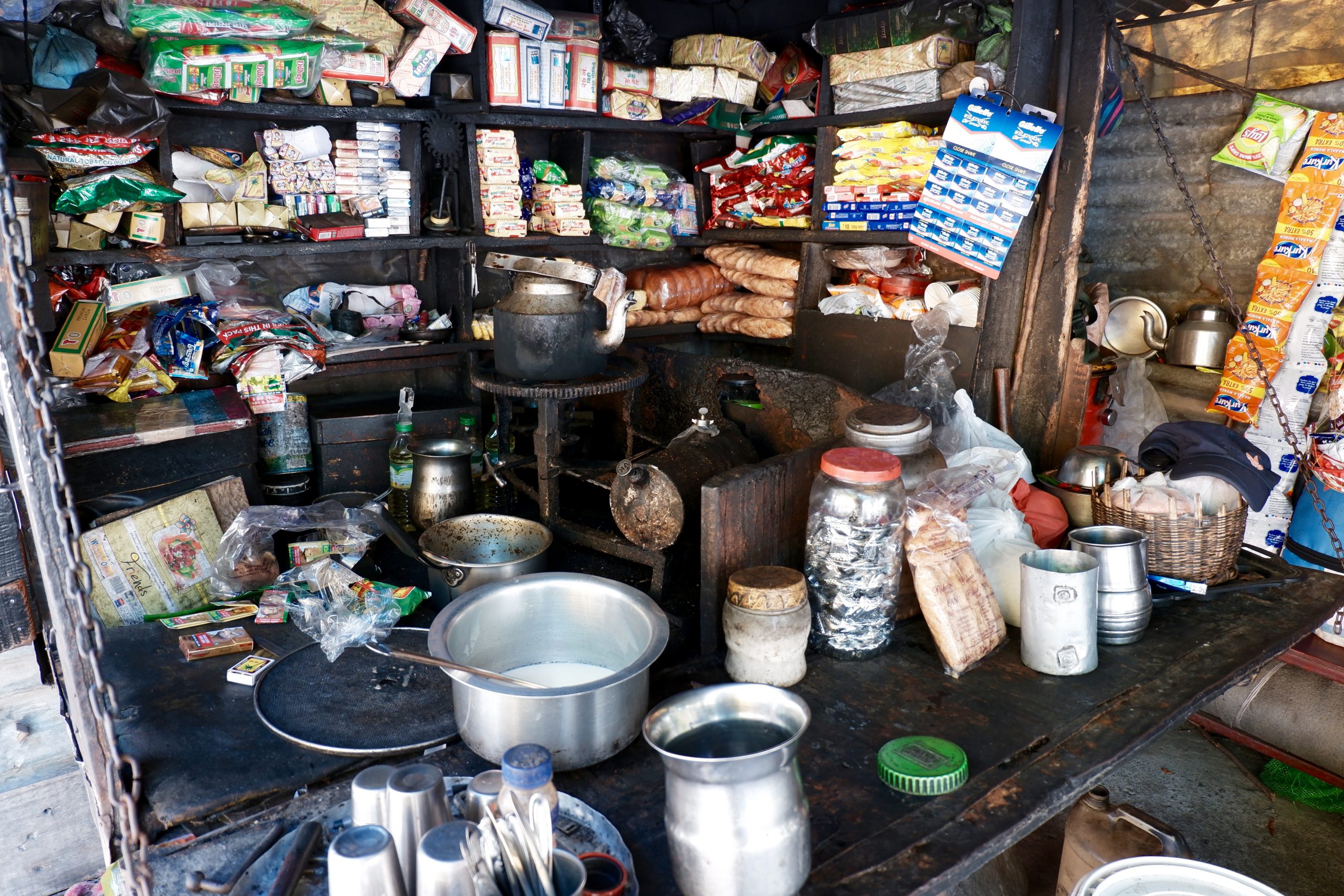 In one of the previous posts I talked about wanting to photograph more road problems. Since there were some, I was able to put the plan into action right away. 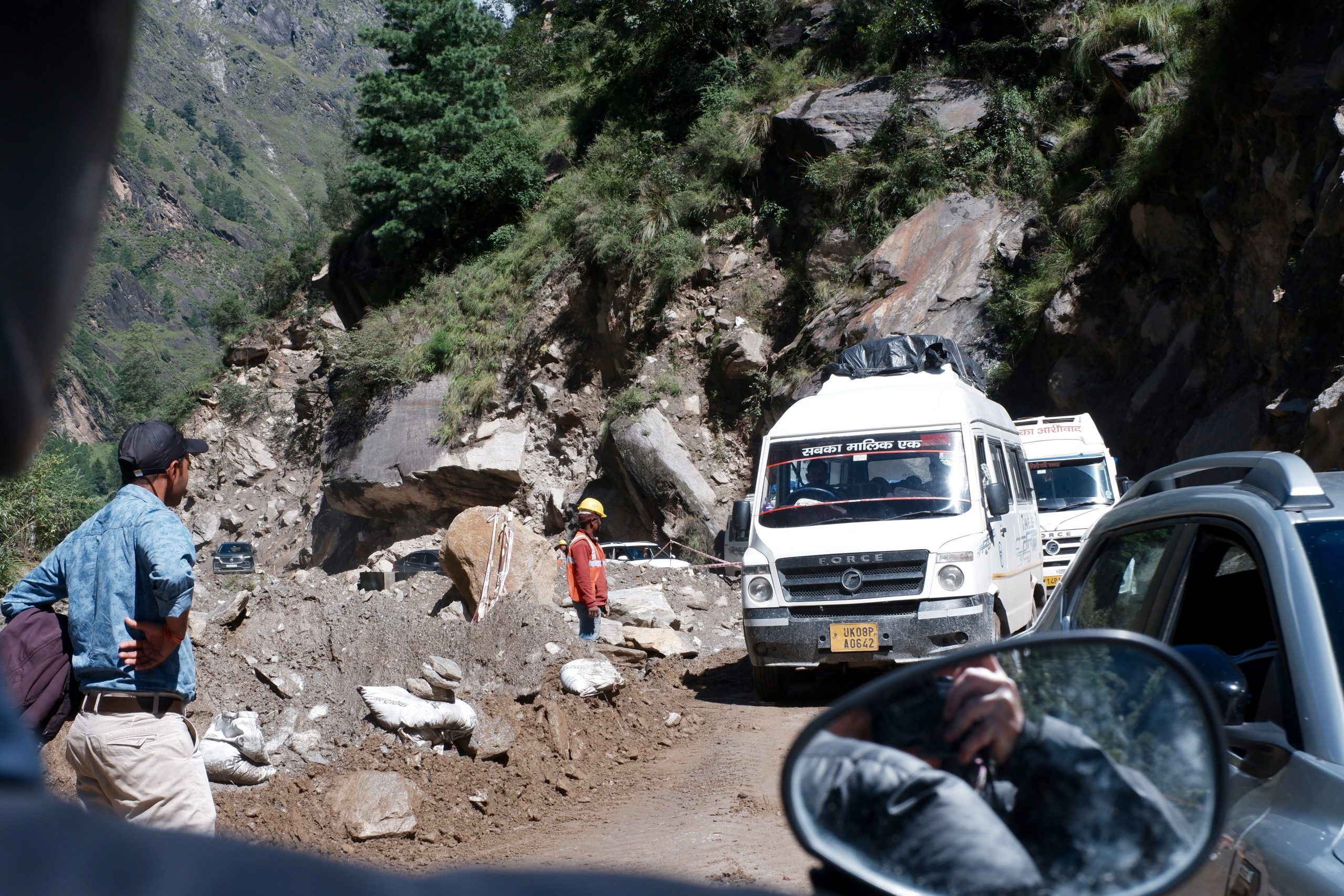 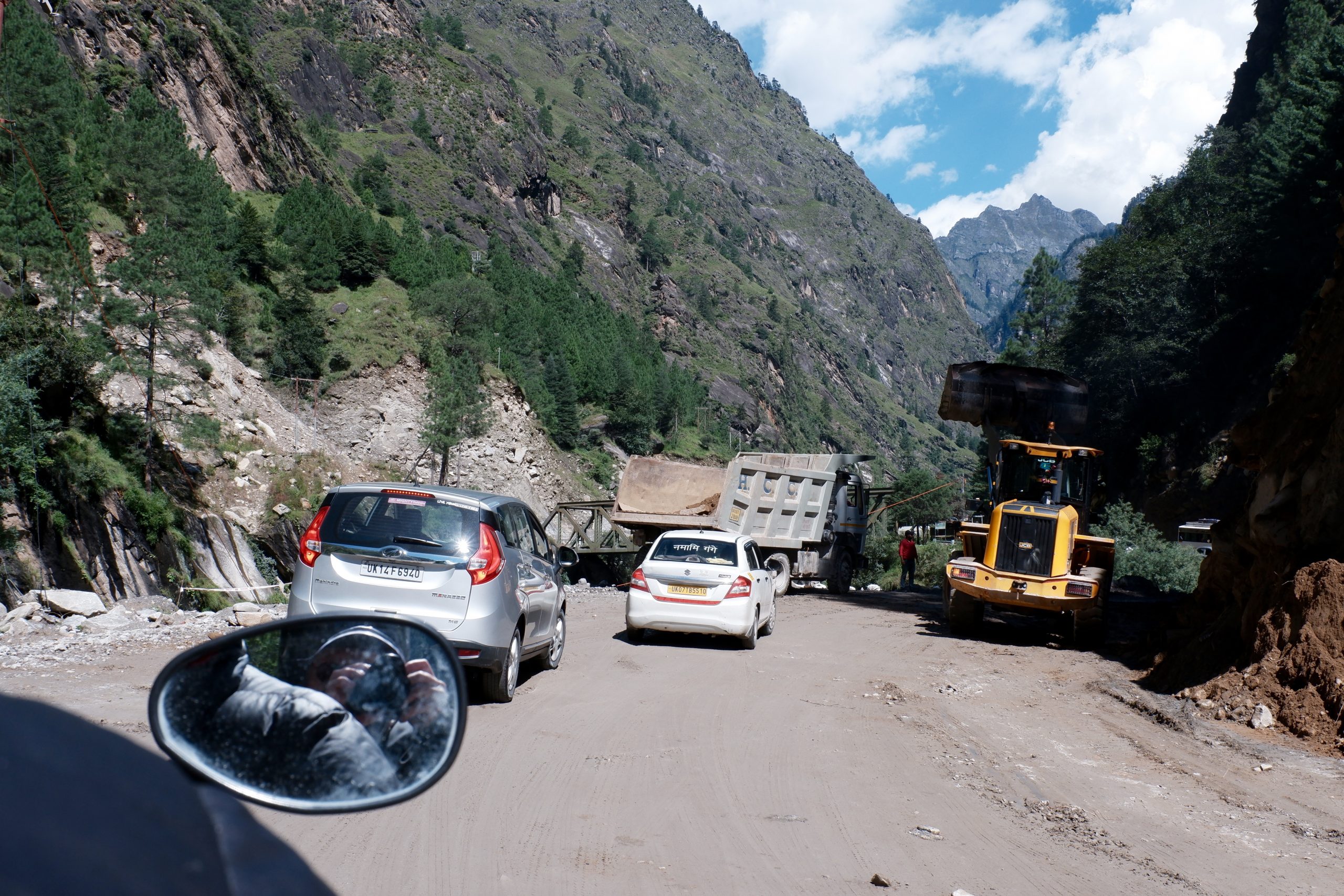 We continued up the Alaknanda. Although we were slowed down from time to time by poor or non-existent road surfaces and bottlenecks due to construction work, we made good progress in principle. Then the road spiralled upwards a bit. 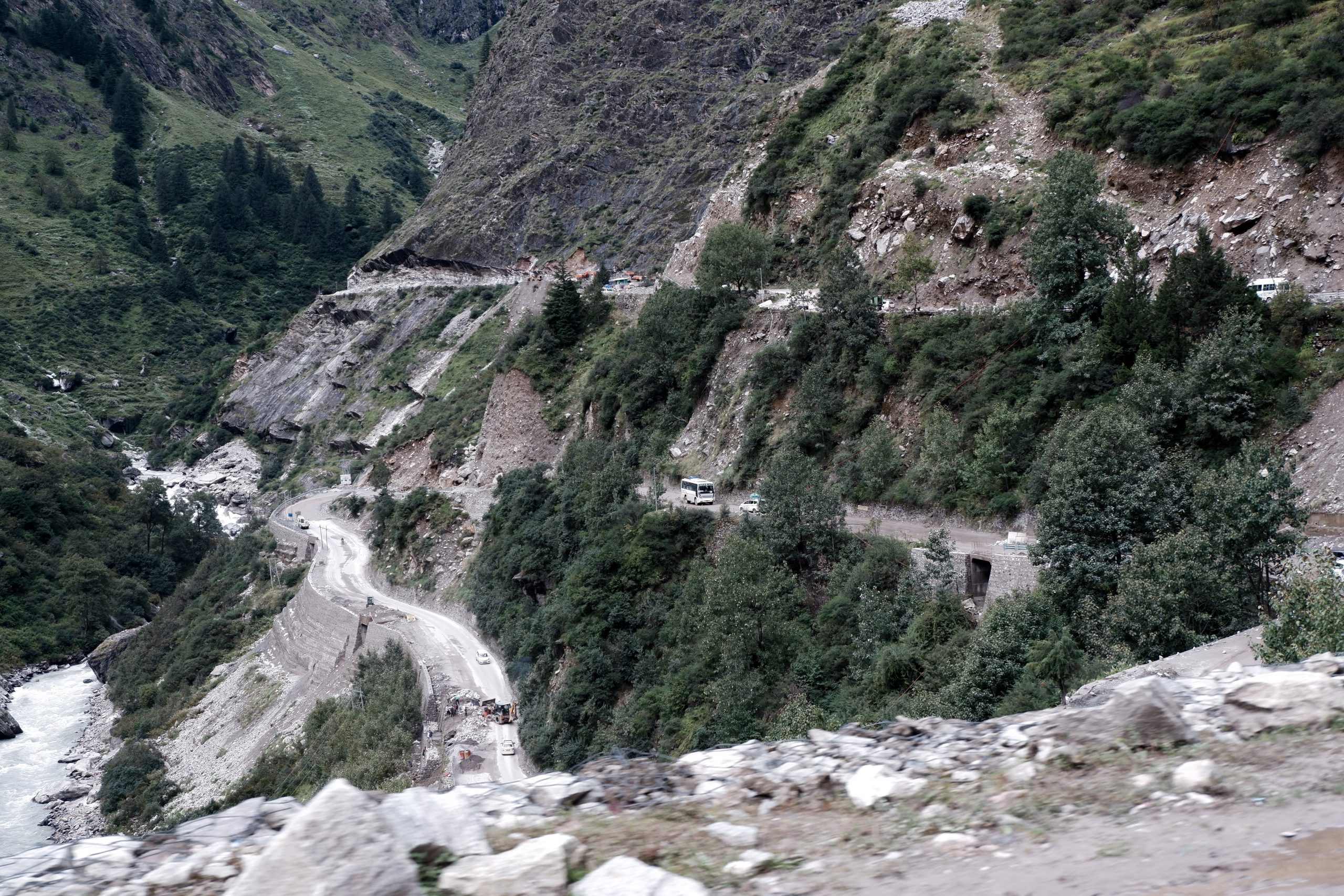 At a toilet stop we talked to a man from Rajasthan, Jaisalmer to be precise, who was pleased that I had been there before. Some of the distances people cover for their pilgrimage are quite long. He took a photo of us: 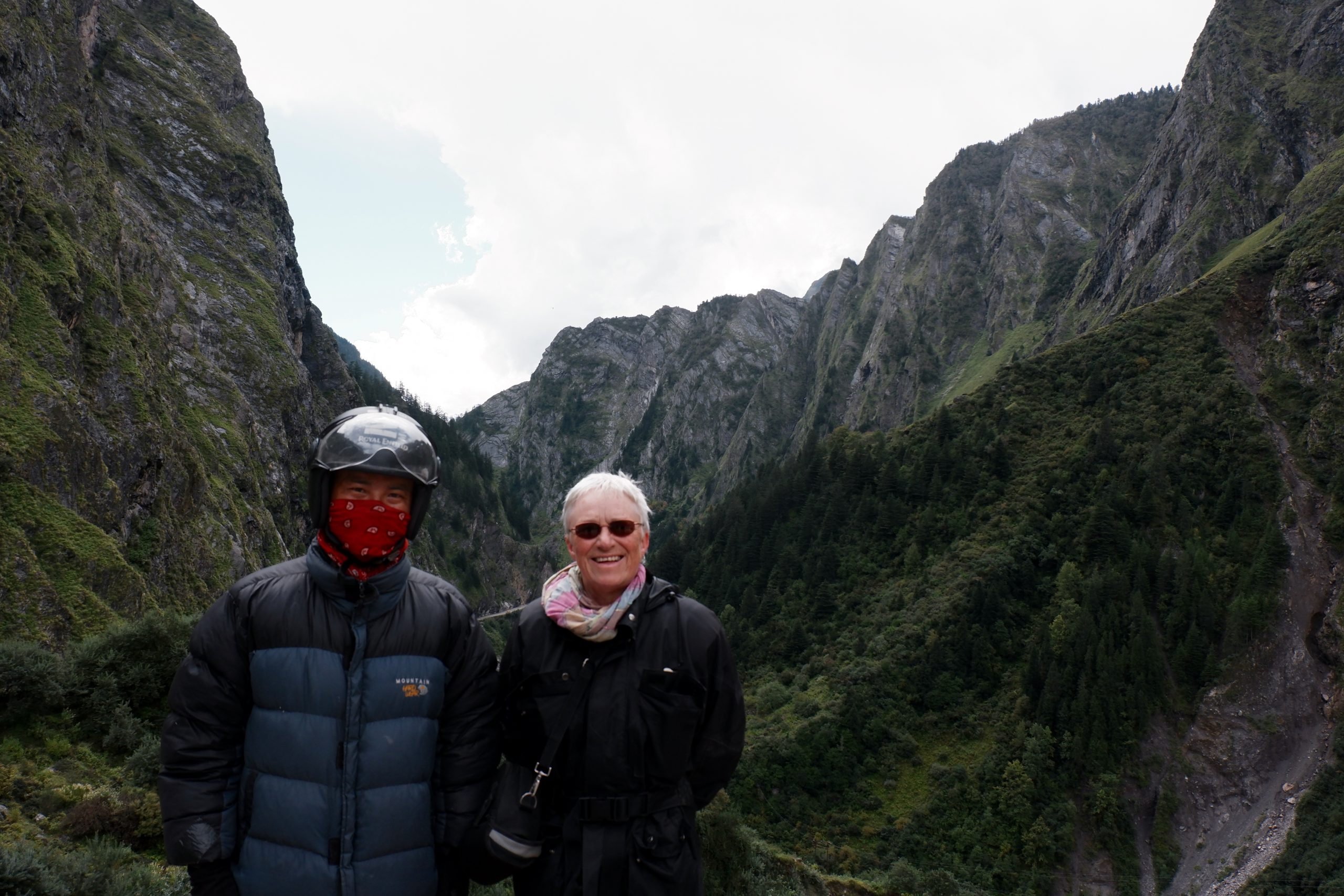 in front of mountains

We continued upwards and then, at 3,130 m above sea level was Badrinath! Unfortunately it became cloudy again, but we saw the sun! And there was no rain either! 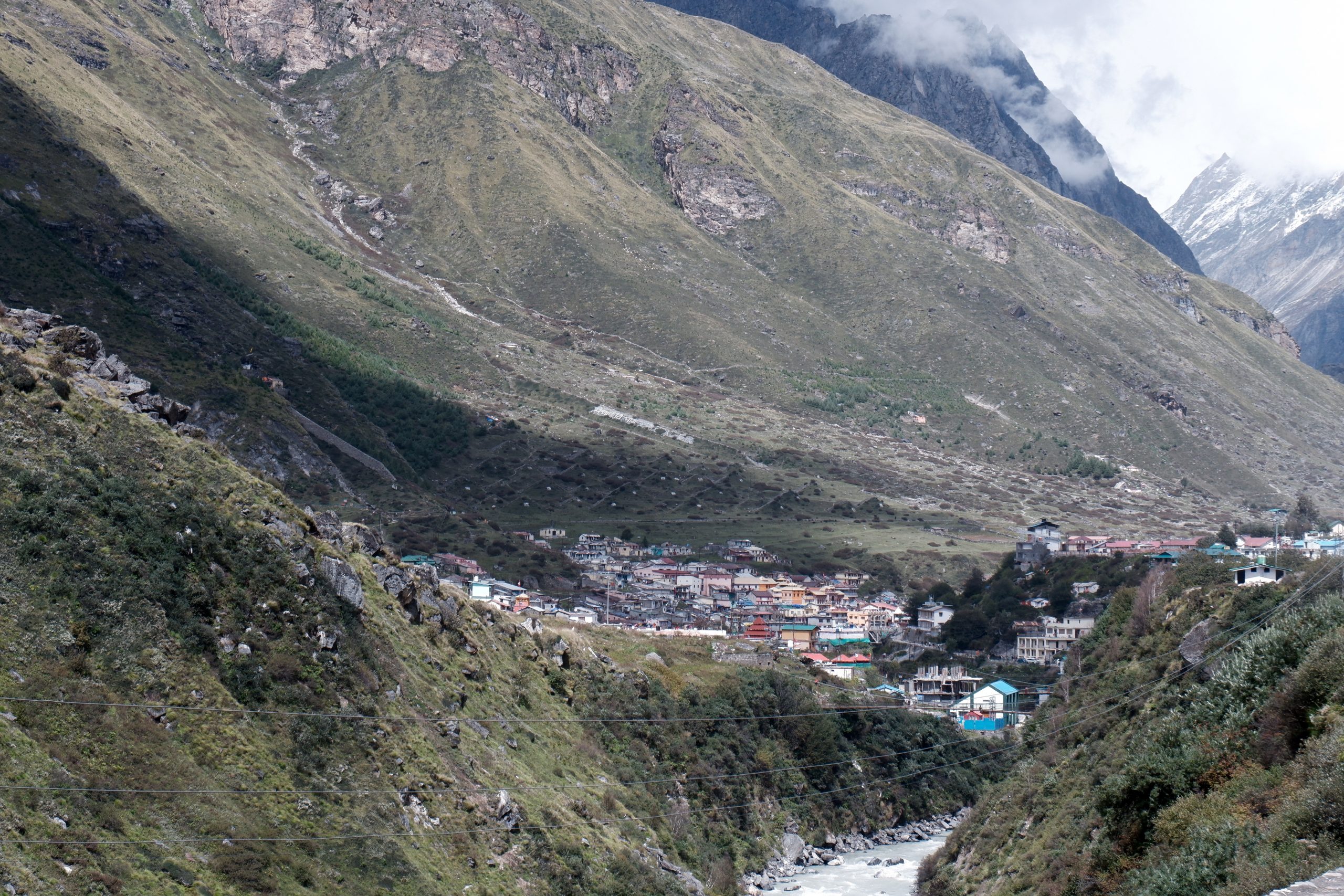 In Badrinath there is a temple dedicated to Vishnu. It is an extremely popular temple despite (or because of?) its remote location. It is open only 6 months of the year, the rest is too cold and snowy. There was a census: in 2022 alone in the first 2 months there were 2.8 million people. However, I don’t know how they were counted – you don’t have to stay there overnight and you don’t have to register. But we did notice the abundance.

You queue at the entrance and then you are slowly let through to the inside of the temple with the sanctuary. We queued, but the crowd didn’t move forward at all. It was warm and cosy and we talked a bit with a man from Odisha who was carrying a toddler in his arms. And somehow I had to laugh at the way we were all huddled there waiting for things to happen. 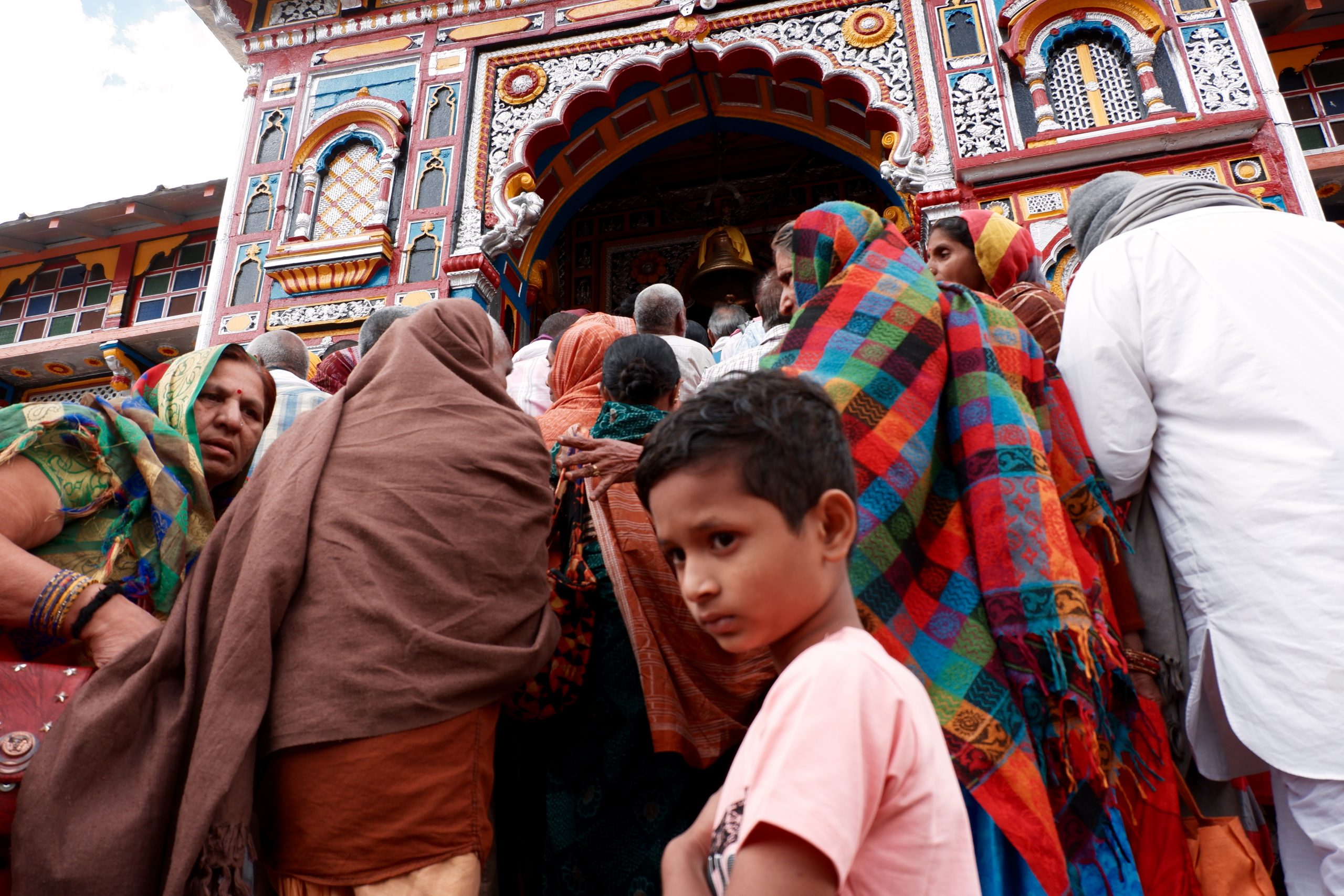 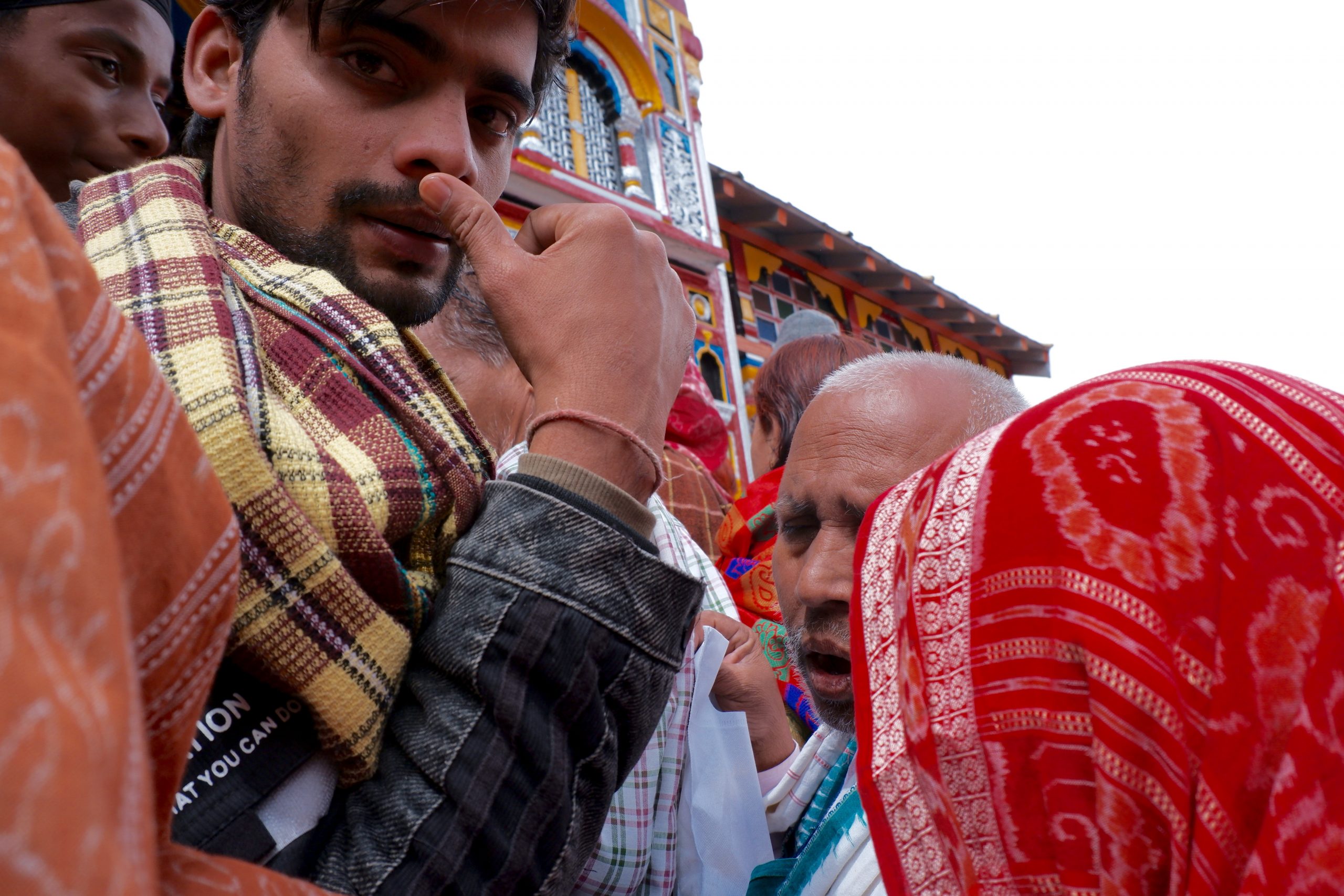 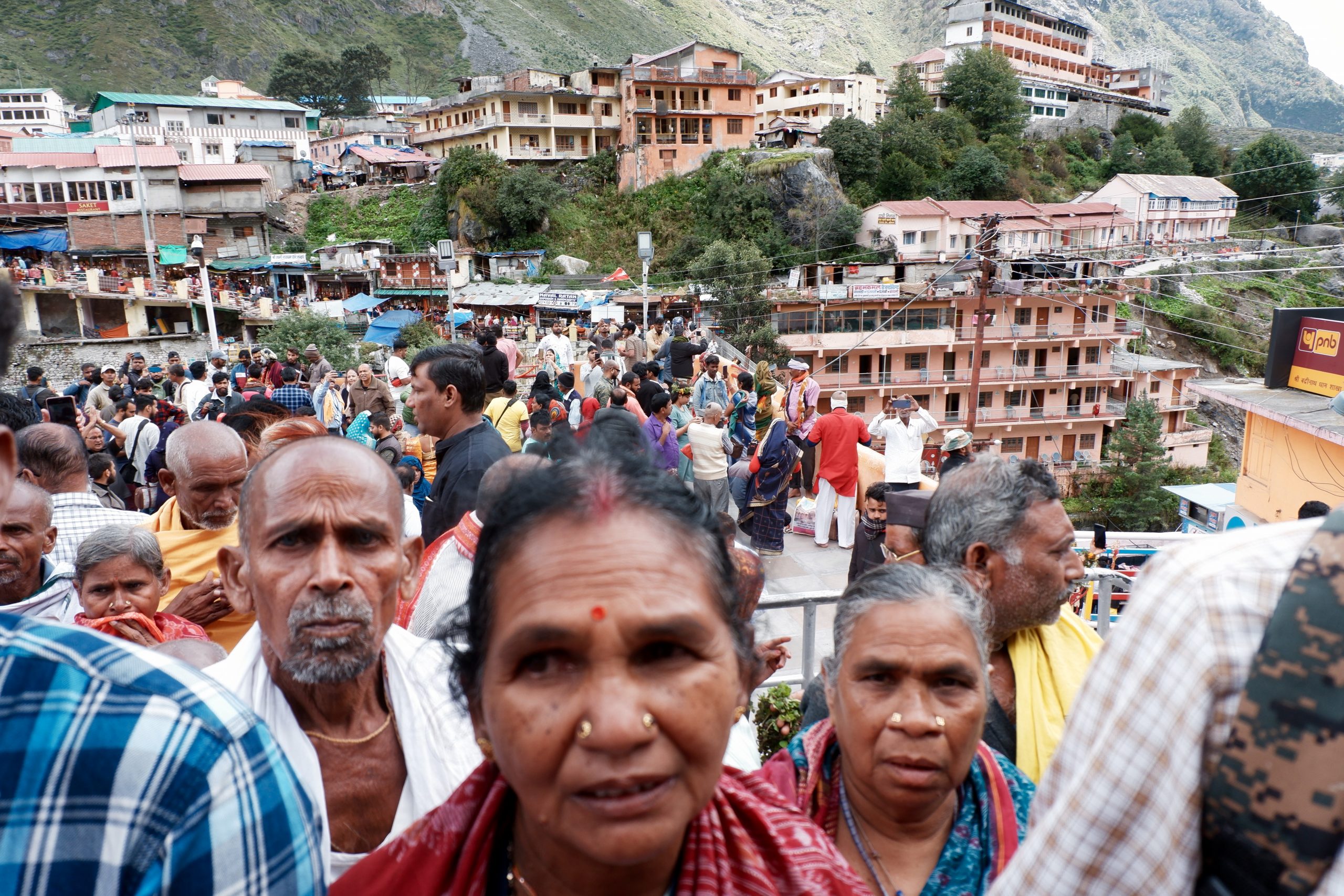 At some point we were actually through the gate and then there was still a queue and I got out. 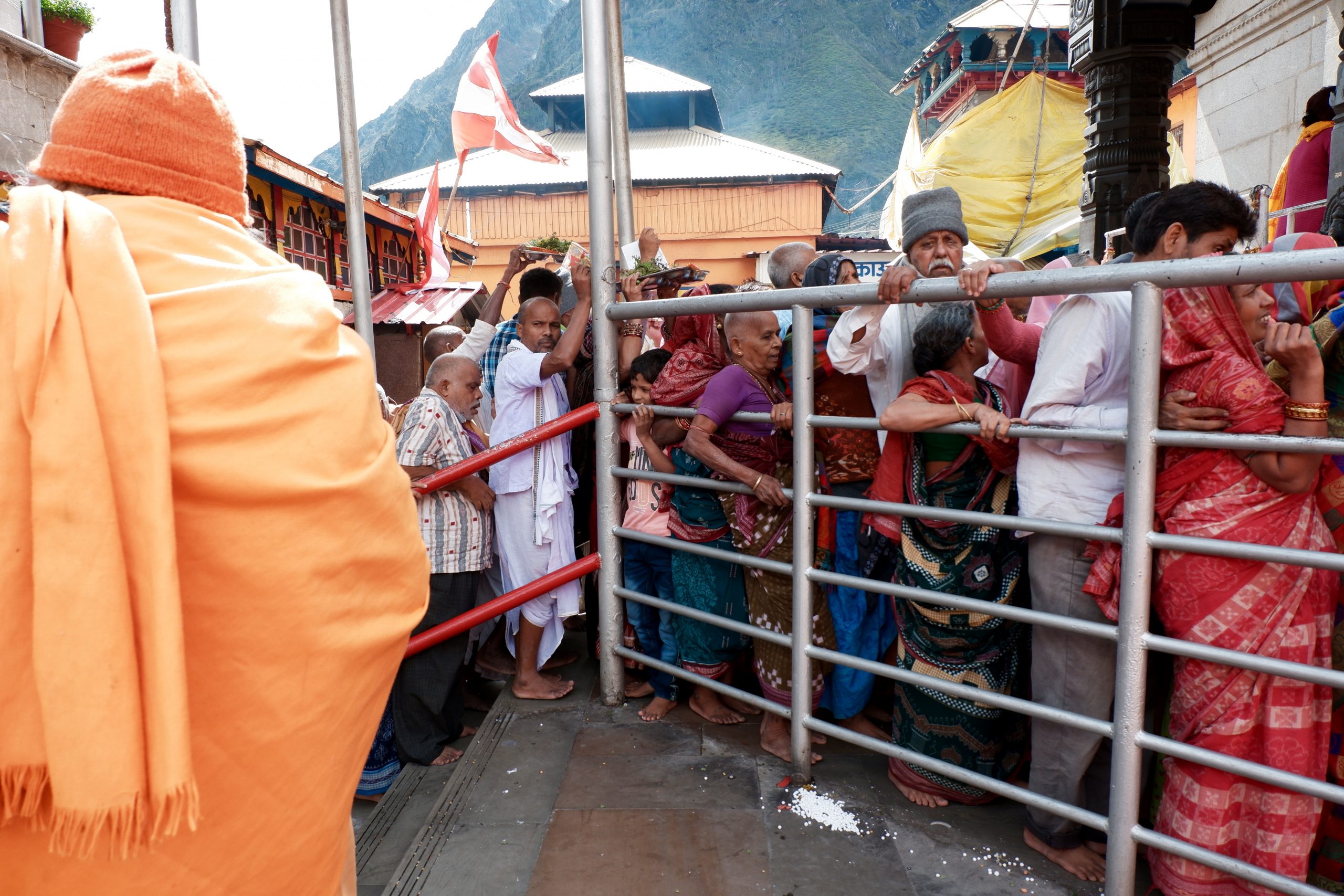 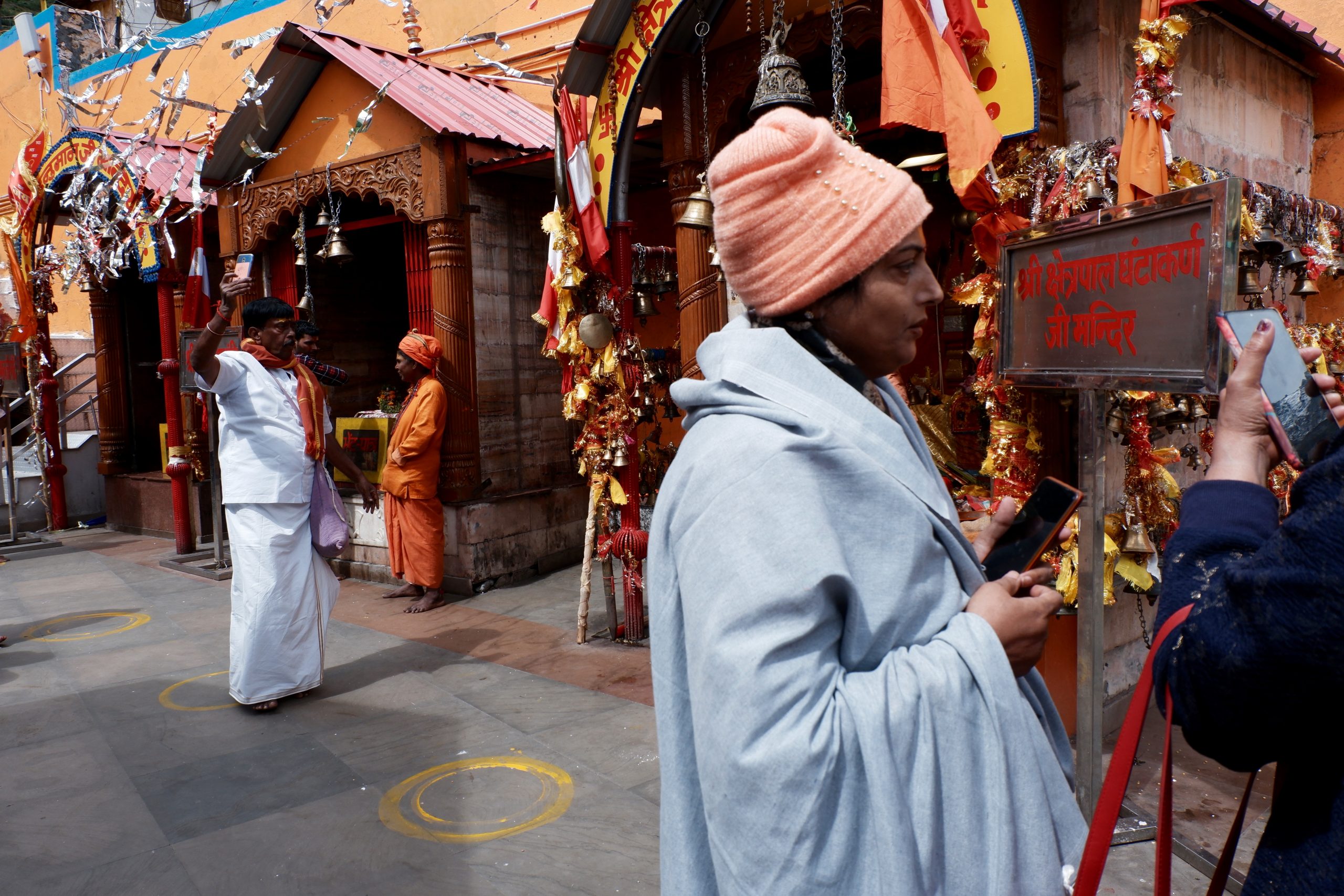 Instead, I took a look around the inner courtyard of the temple, which is located around the sanctuary. I discovered the no photography signs too late.

There are also hot springs near the temple and many worshippers clean themselves first before going into the temple. With the men, it is fully public and you can walk around and take pictures. 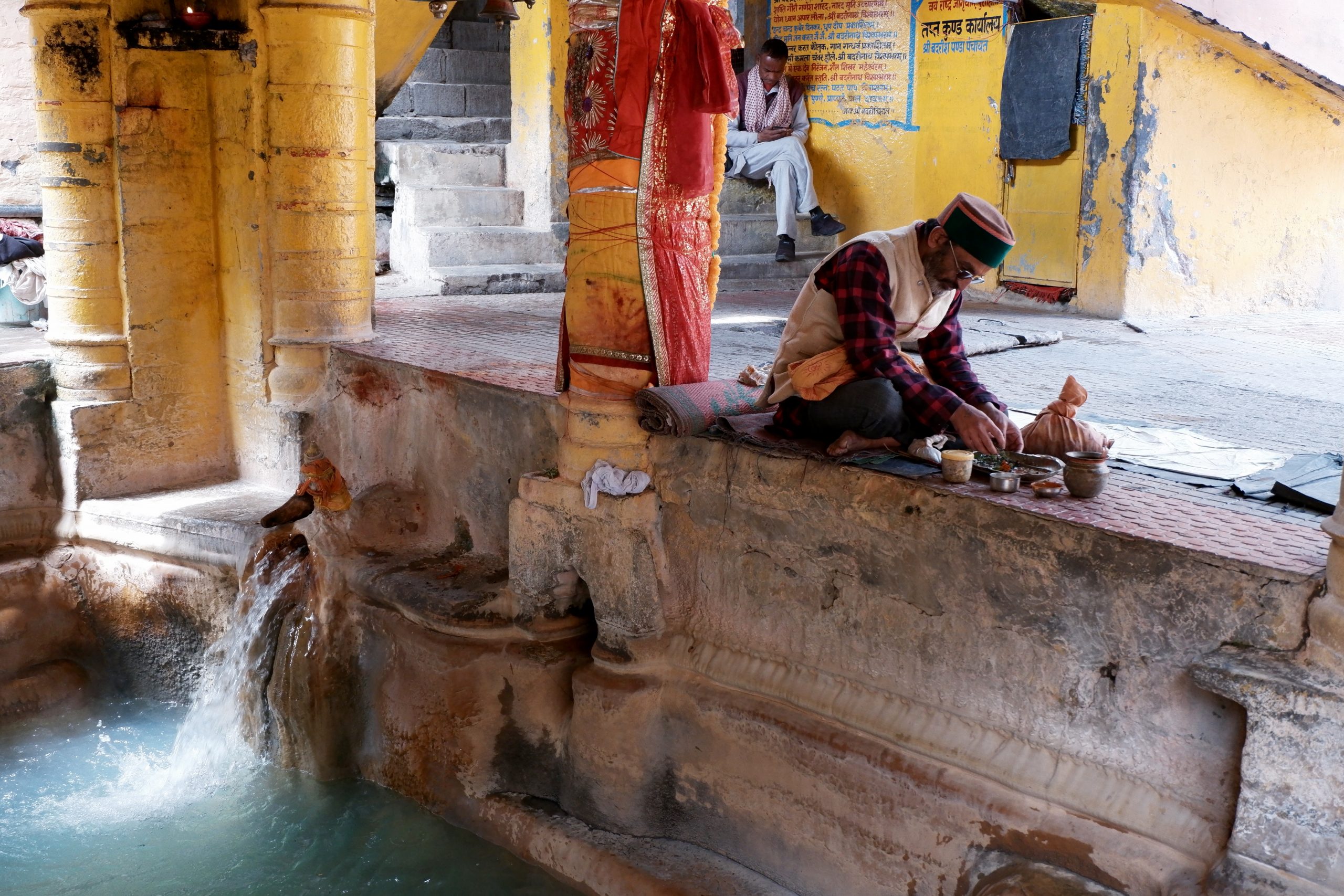 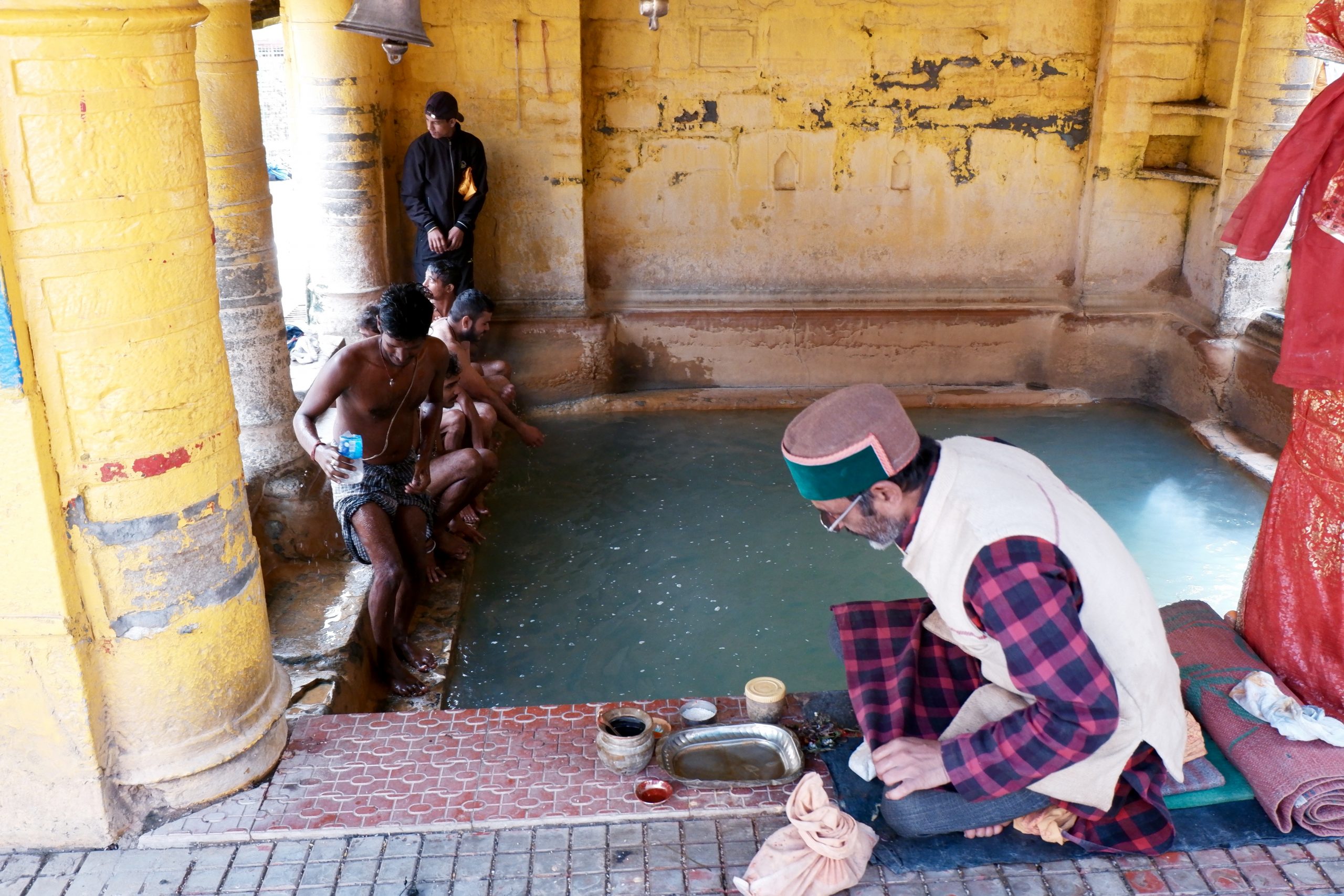 The temple is dedicated to Vishnu, i.e. the Preserver. Brahma is the creator of the world, Vishnu the preserver and Shiva the destroyer. There is a story about this temple. Vishnu is said to have sat here and meditated. While doing so, he was so absorbed that he did not notice how nasty cold it was getting. His consort Lakshmi was very worried, but did not want to disturb him while he was meditating. And so she transformed herself into a badri tree and protected him. This devotion pleased Vishnu and named the place Badrika Ashrama. But this is only a legend. You can read a lot about the temple here.

And then we had to explore more and that’s what the next blogpost is about.