From Cholpon Ata I took a minibus (Marshrutka) and drove it to Karakol, a town of about 70,000 people 5 km south of the eastern end of Issyk Kul. I was so to and fro about how to arrange my travel rest. My wonderful room in a top accommodation (only the dogs greeting me every time with a big bark – no matter which door I come out of – are not my cup of tea) and also very cheap as well as the possibility of various day tours tipped the scales that I decided to stay here until my return journey to Bishkek. I also like the city very much.

As in Bishkek, large parts of the city are laid out like a chessboard with streets, which is good for orientation. The accommodation is on a sandy road (there are many of them here) with mostly single houses and a rooster crows in the morning. Sometimes at other times of the day.

But first, back to the drive. It was cloudy and the road led along the Issyk Kul. 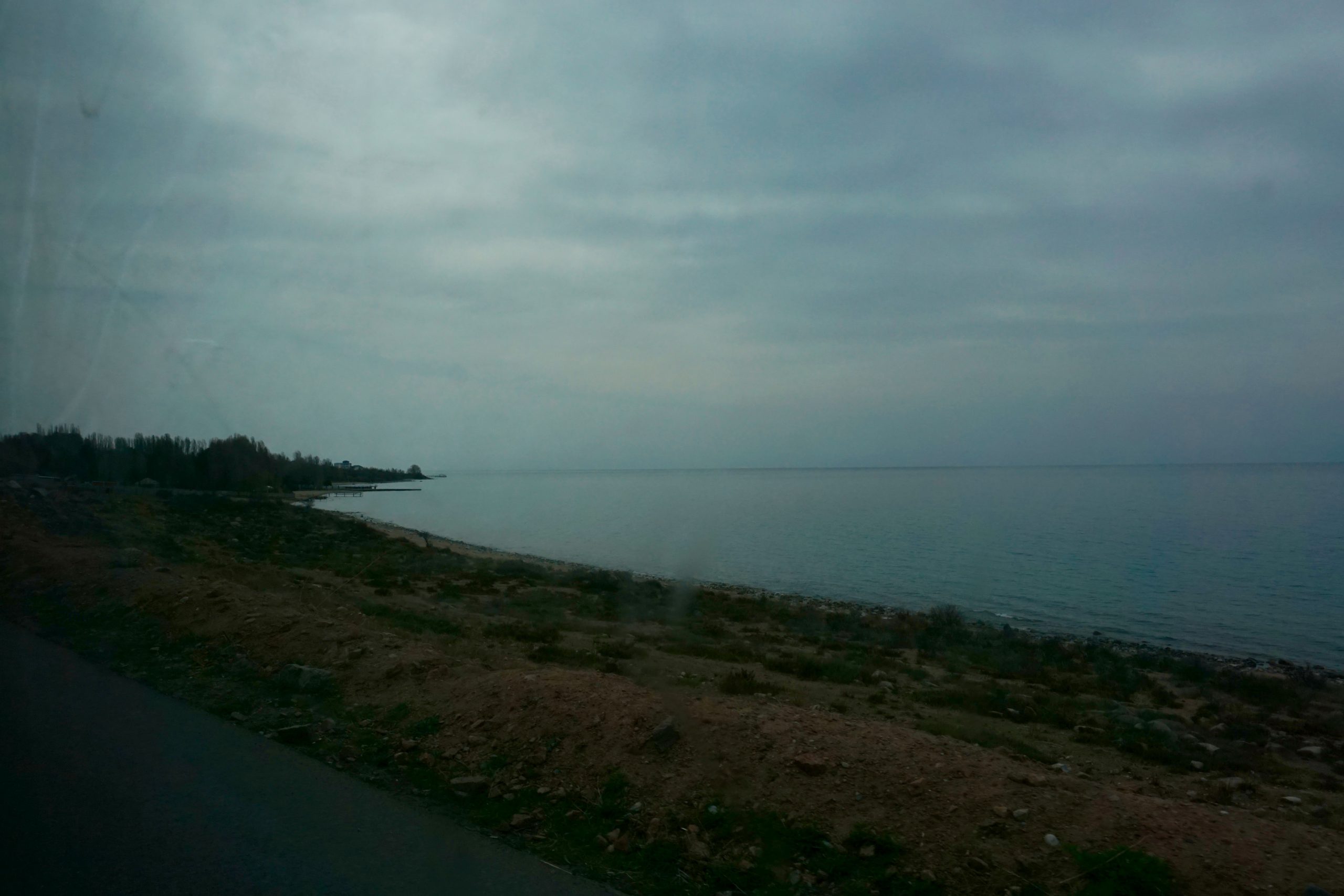 There were a lot of people jogging – I don’t know if it was a marathon or if it’s the number one national sport here, but in any case they were jogging quite fast. 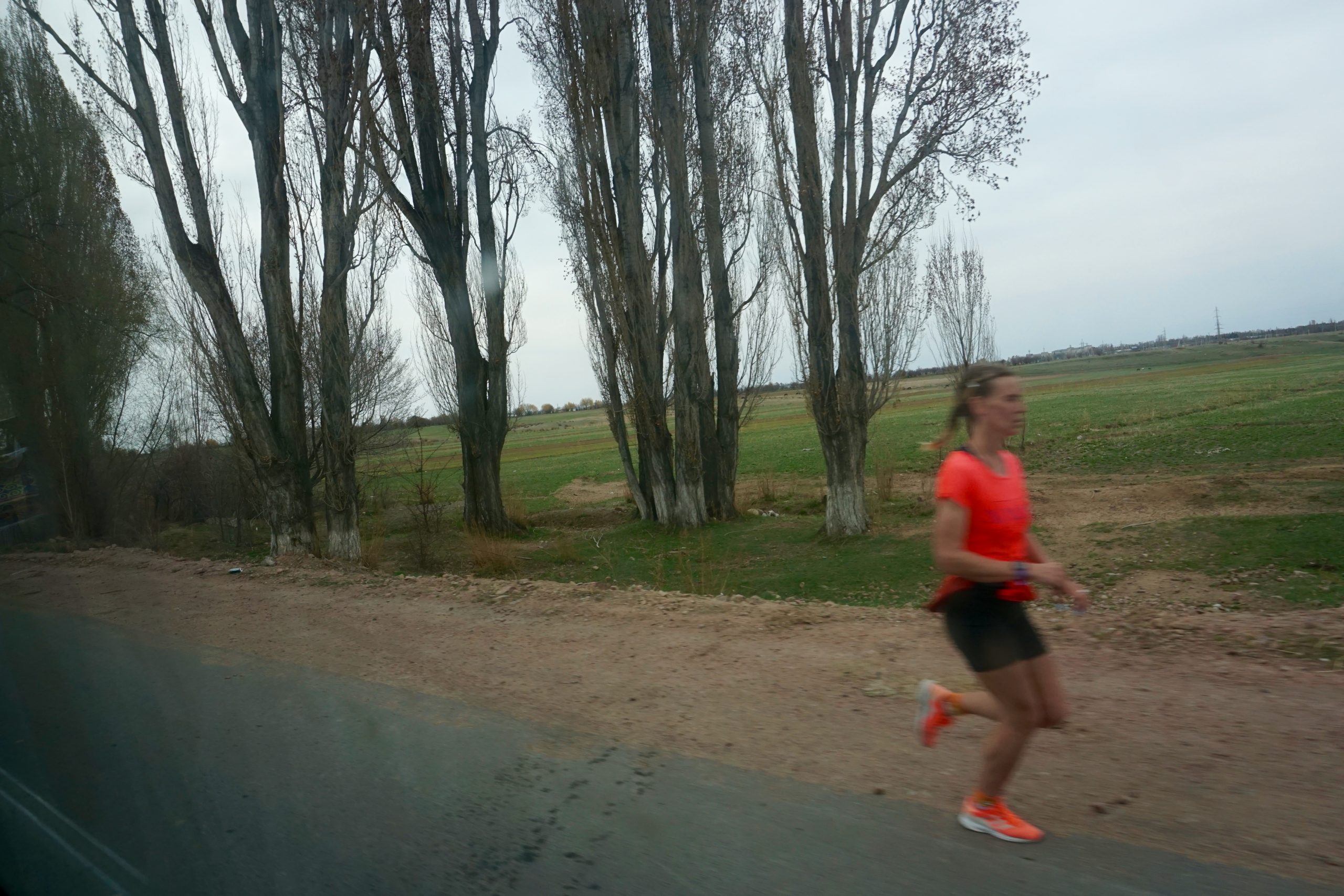 I find it beautiful and remarkable that you often have avenues like this. Still without foliage, but the green is now slowly coming out. 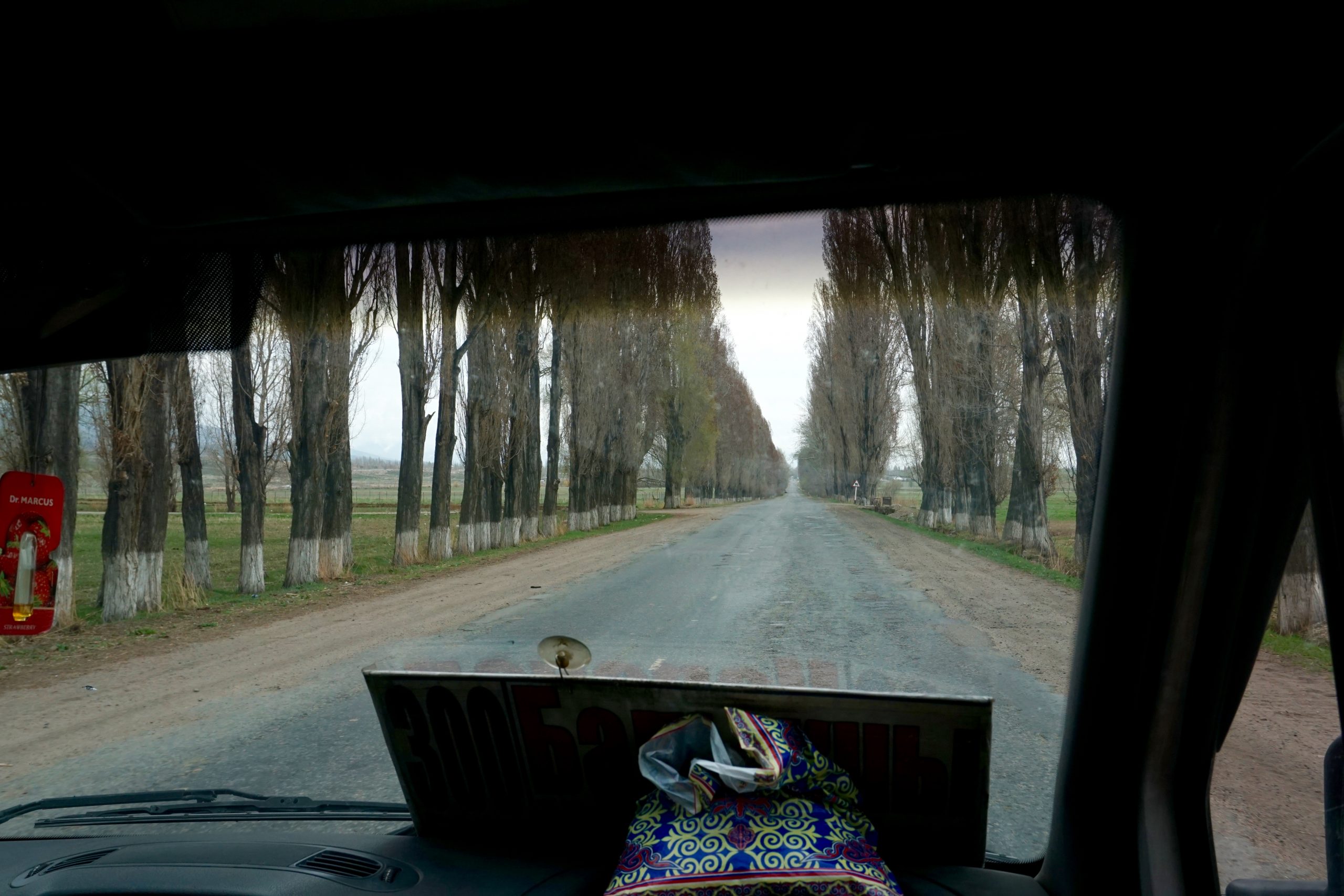 I found these trees particularly beautiful, but I have no idea what they are: 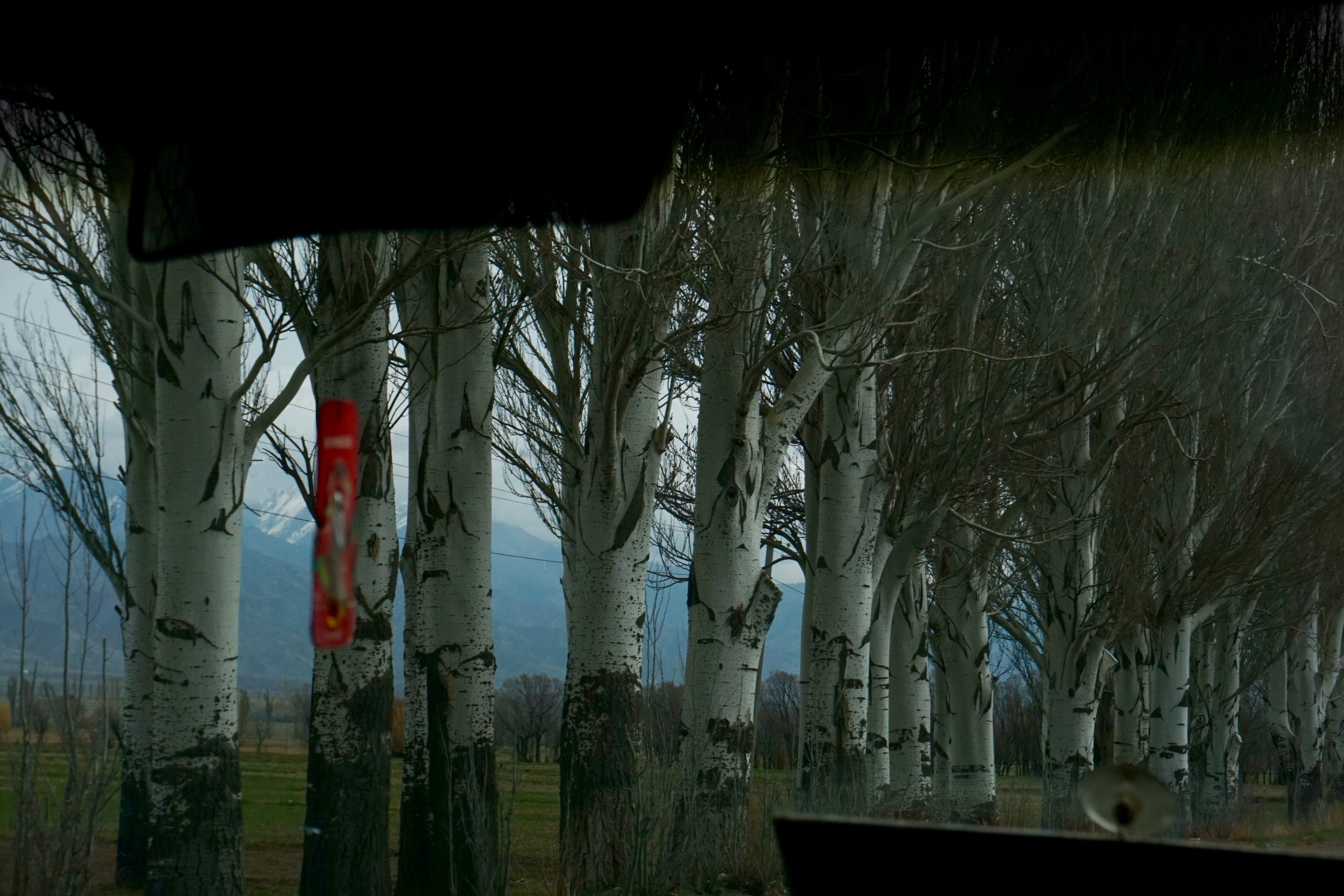 Trees are now in blossom in Karakol and the surrounding area. But I’m such a botanical nit that I have no idea what kind of trees they are. In any case, they are very beautiful. 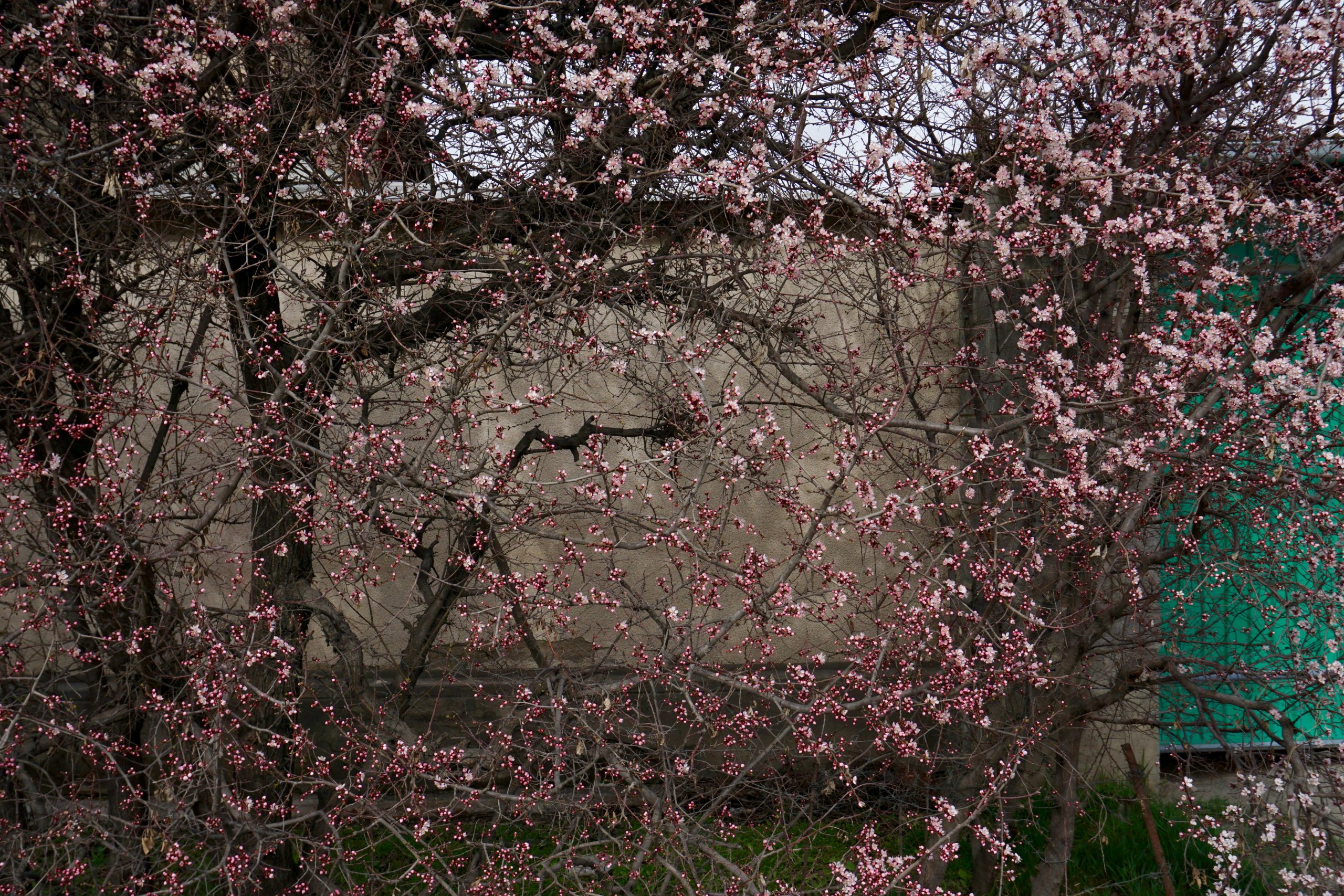 After this botanical ignorance, back to the checkerboard streets. With those made of sand, one rather has the feeling of walking through a village. 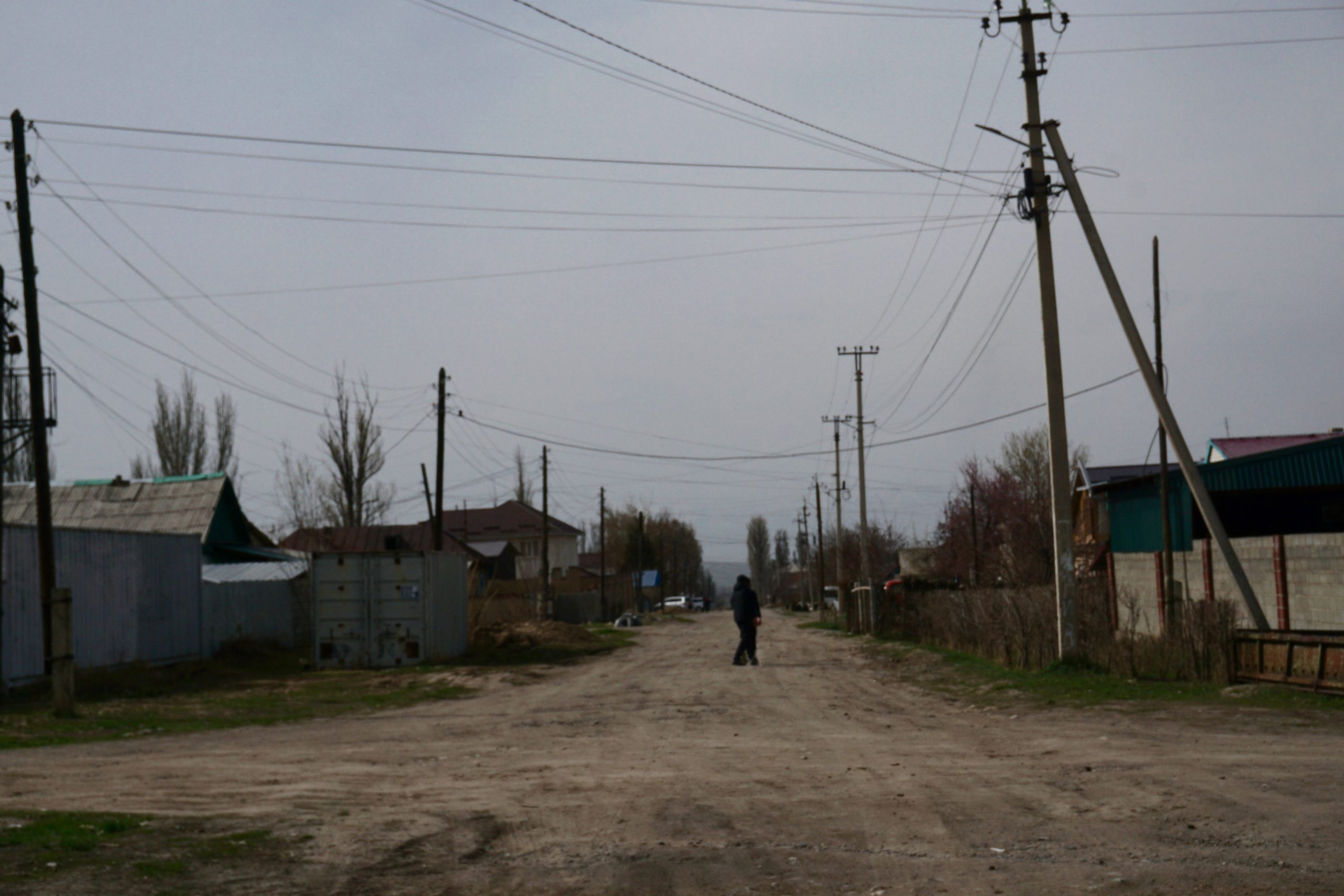 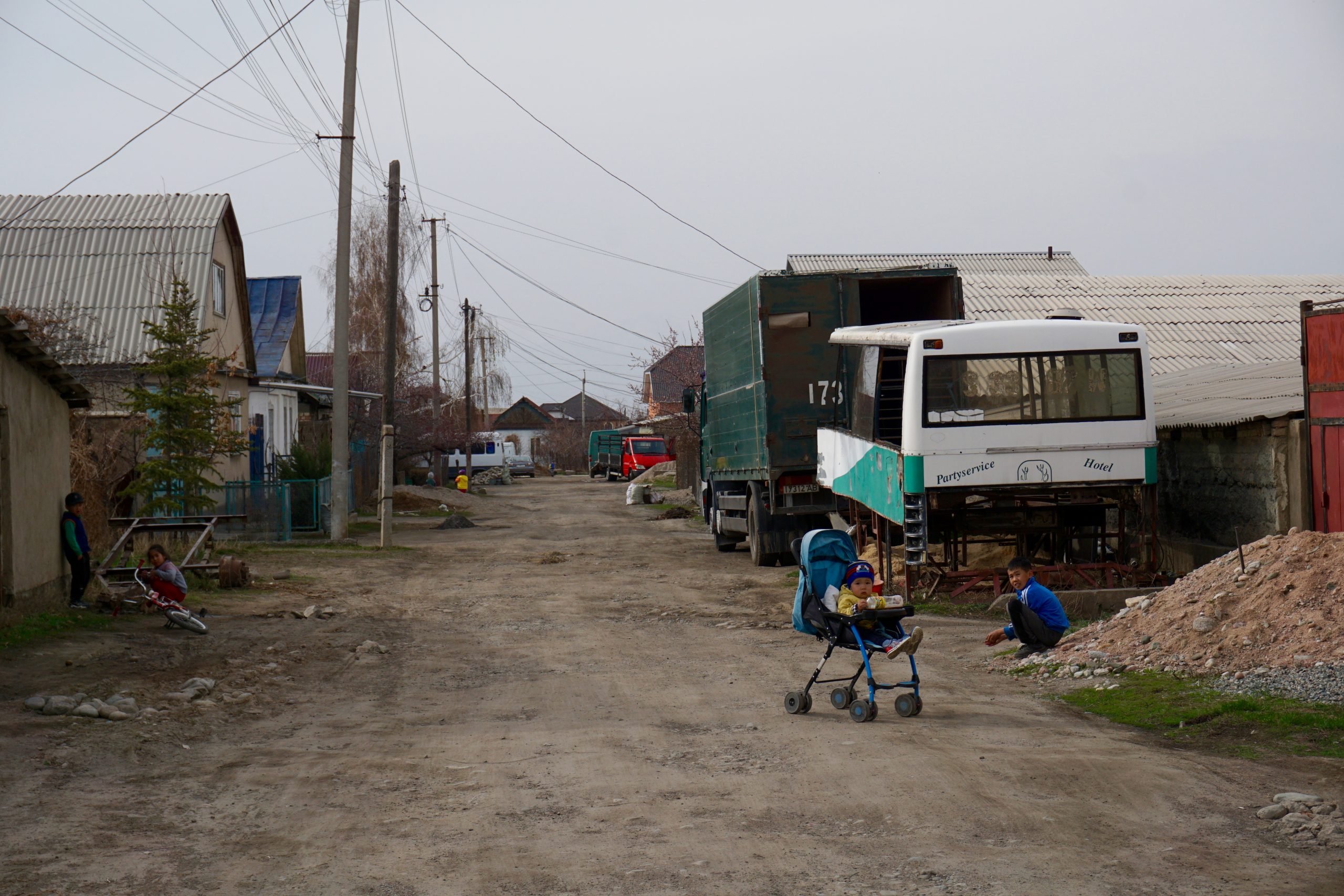 One of the observations is that relatively many cottages have sand piles in front of the driveway and children like to play around there. Also, these little baby carriages are extremely popular (or the only product). There are many of these little houses. They are often nicely painted. And they all have a big locked gate that you have to go through to get to the front door. 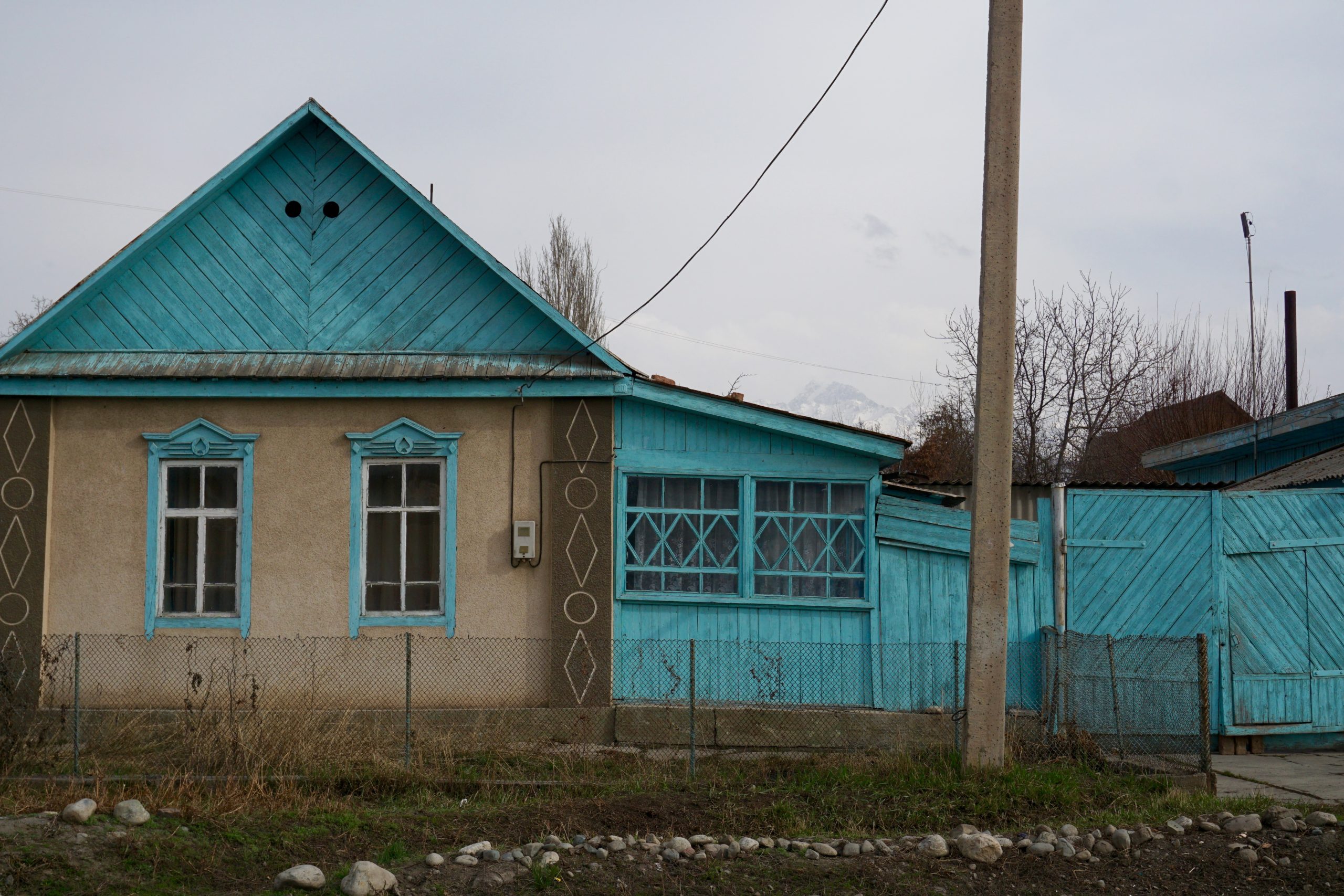 The houses here usually don’t look quite so uniform. And there are many buildings whose significance eludes me. Here is an uninhabited beautiful house: 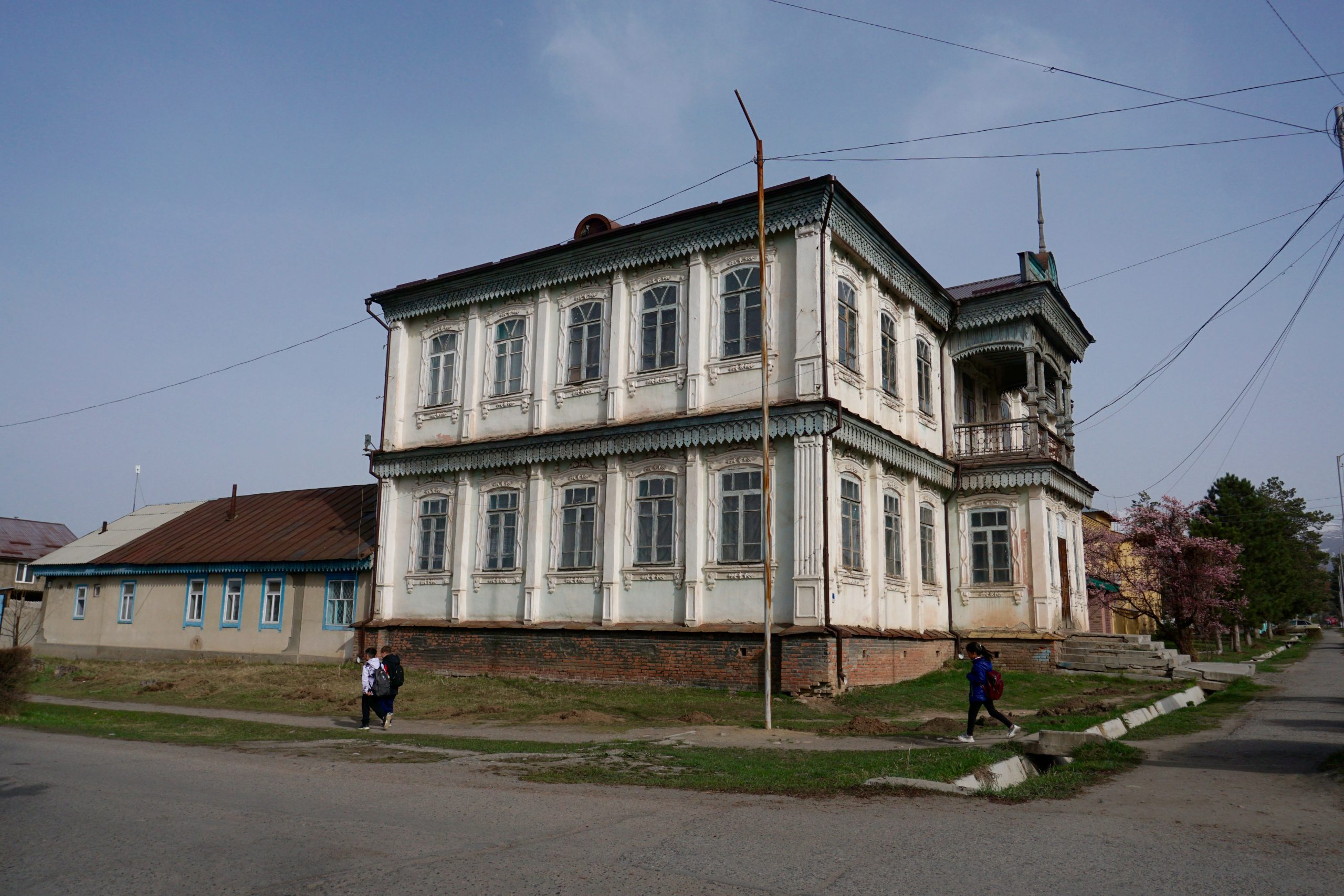 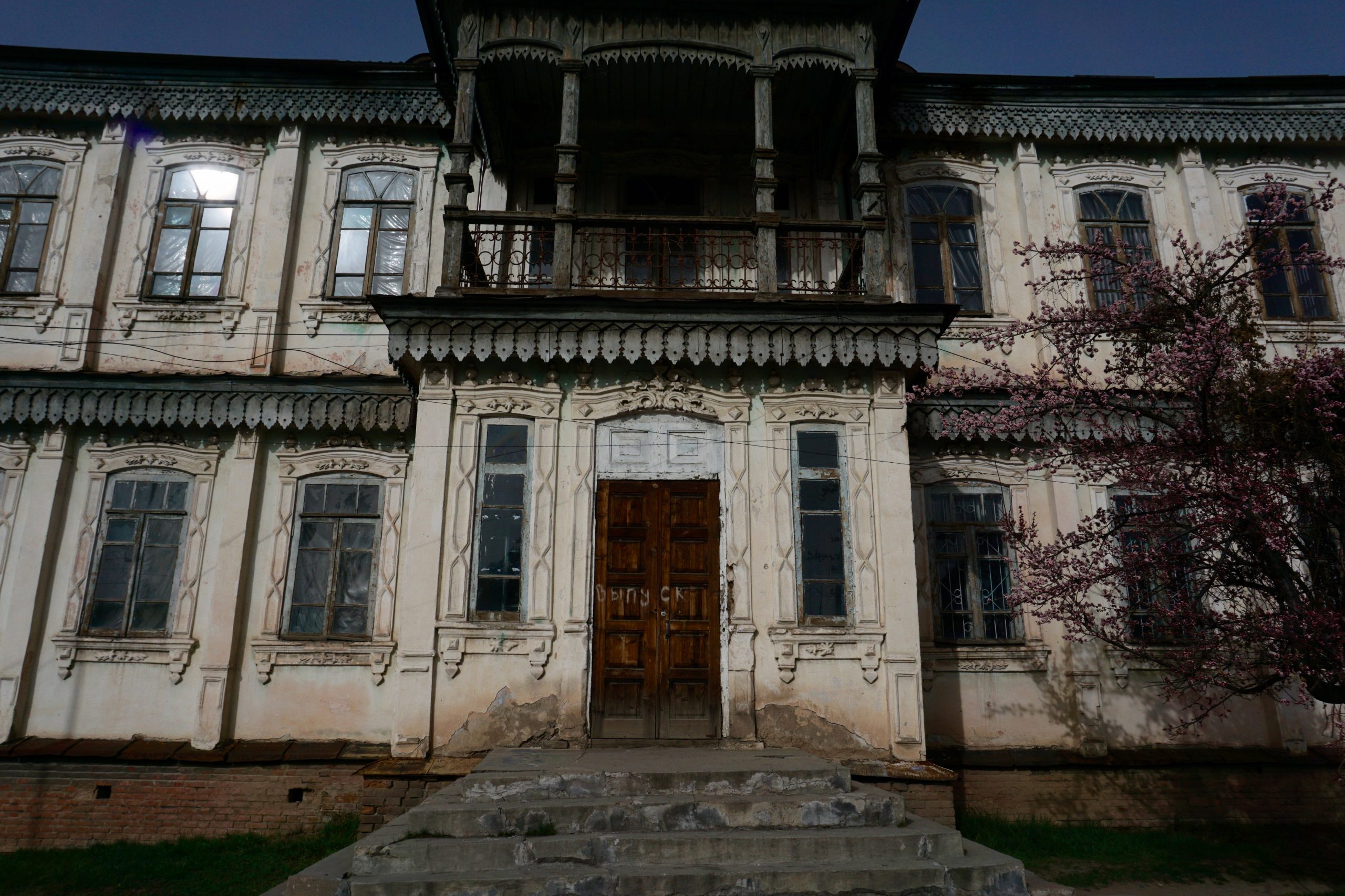 abandoned house from the front

Bt there are also these Soviet Blocks: 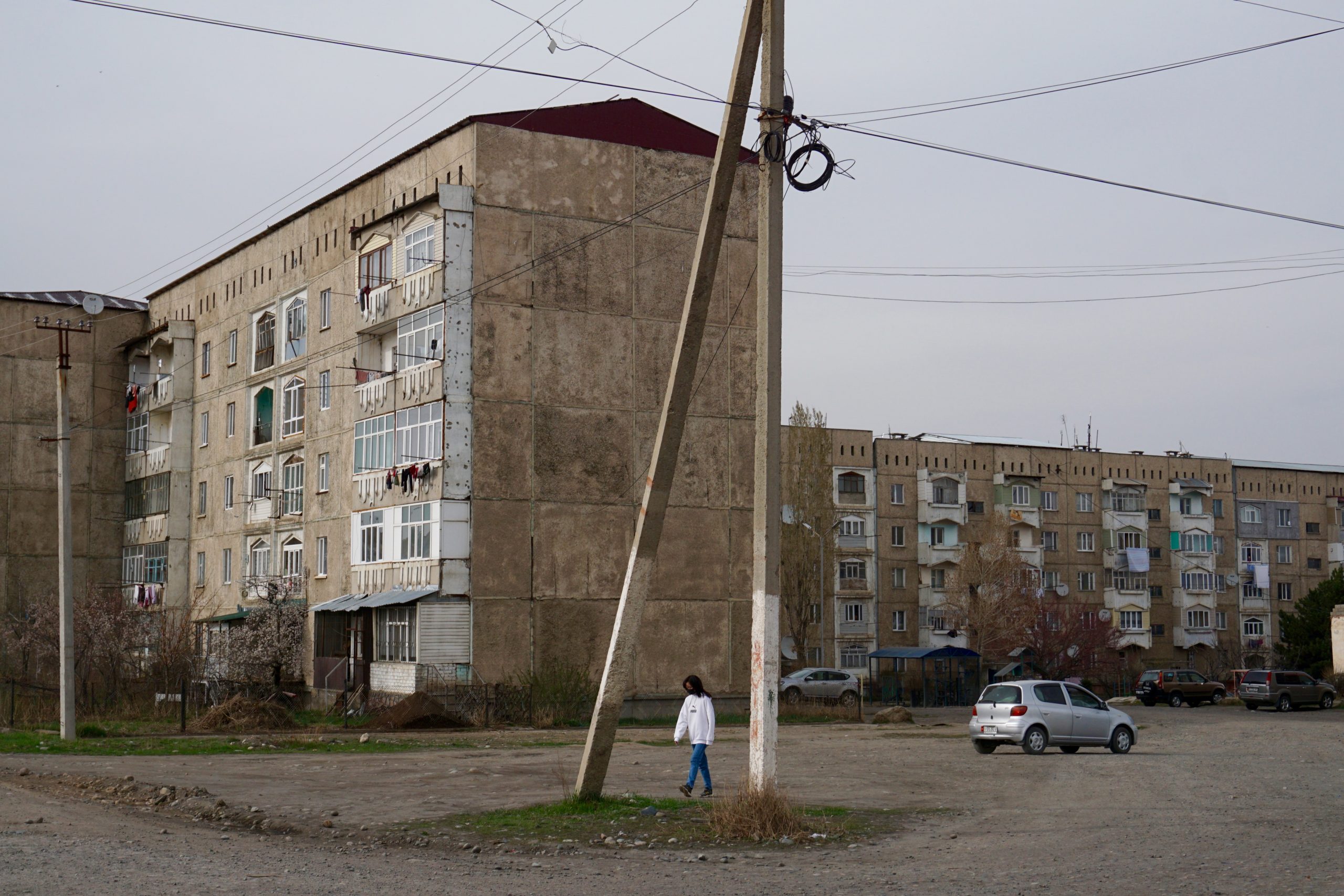 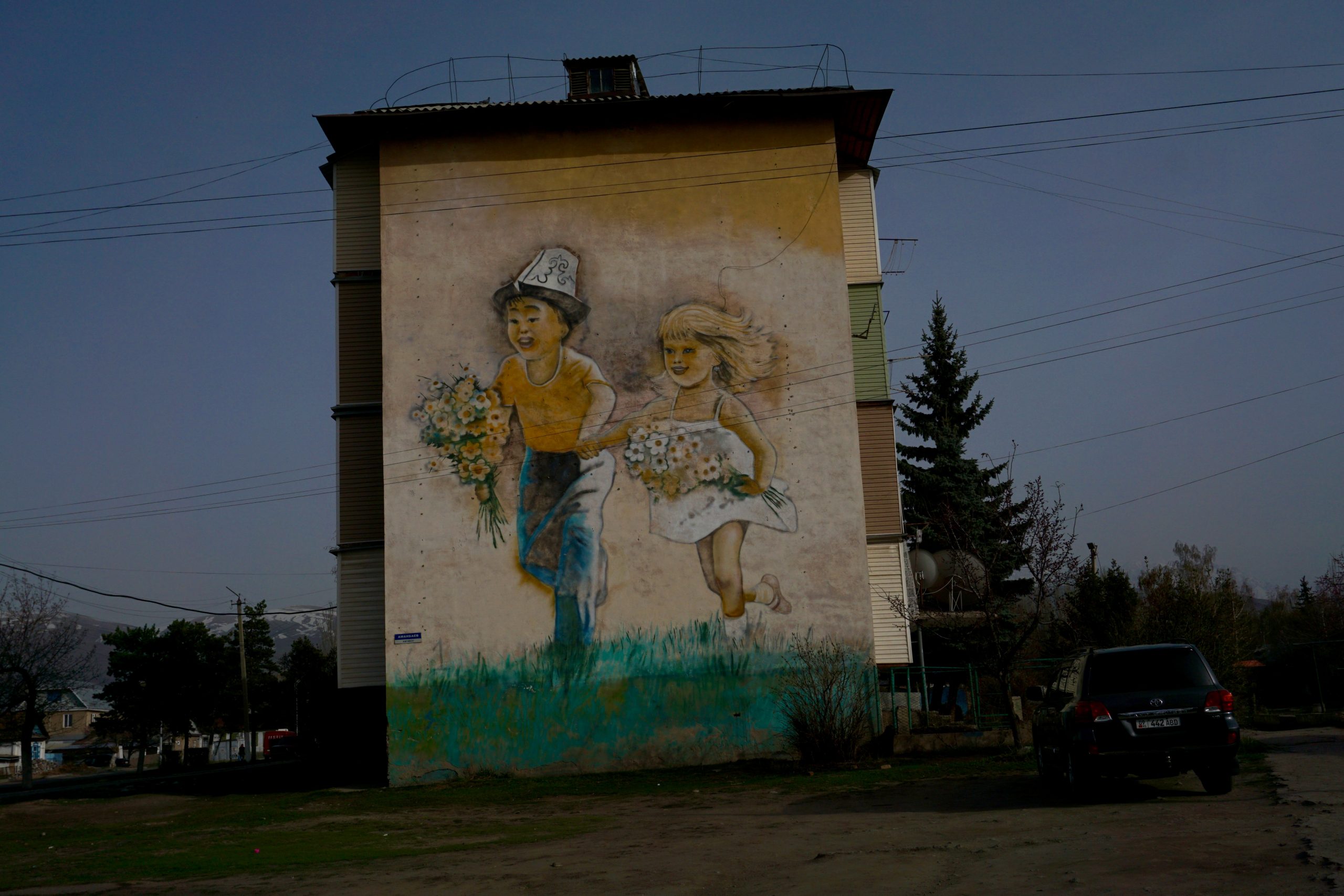 Ever since I saw this mural, I’ve been wondering whether it’s really the German “Ich komme” or whether it means something else in another language.

There are also massive statues here. It is said that the Kyrgyz men and Kyrgyz women are quite equal – but if you look at the genders of the statues, 90% of them are read as male. 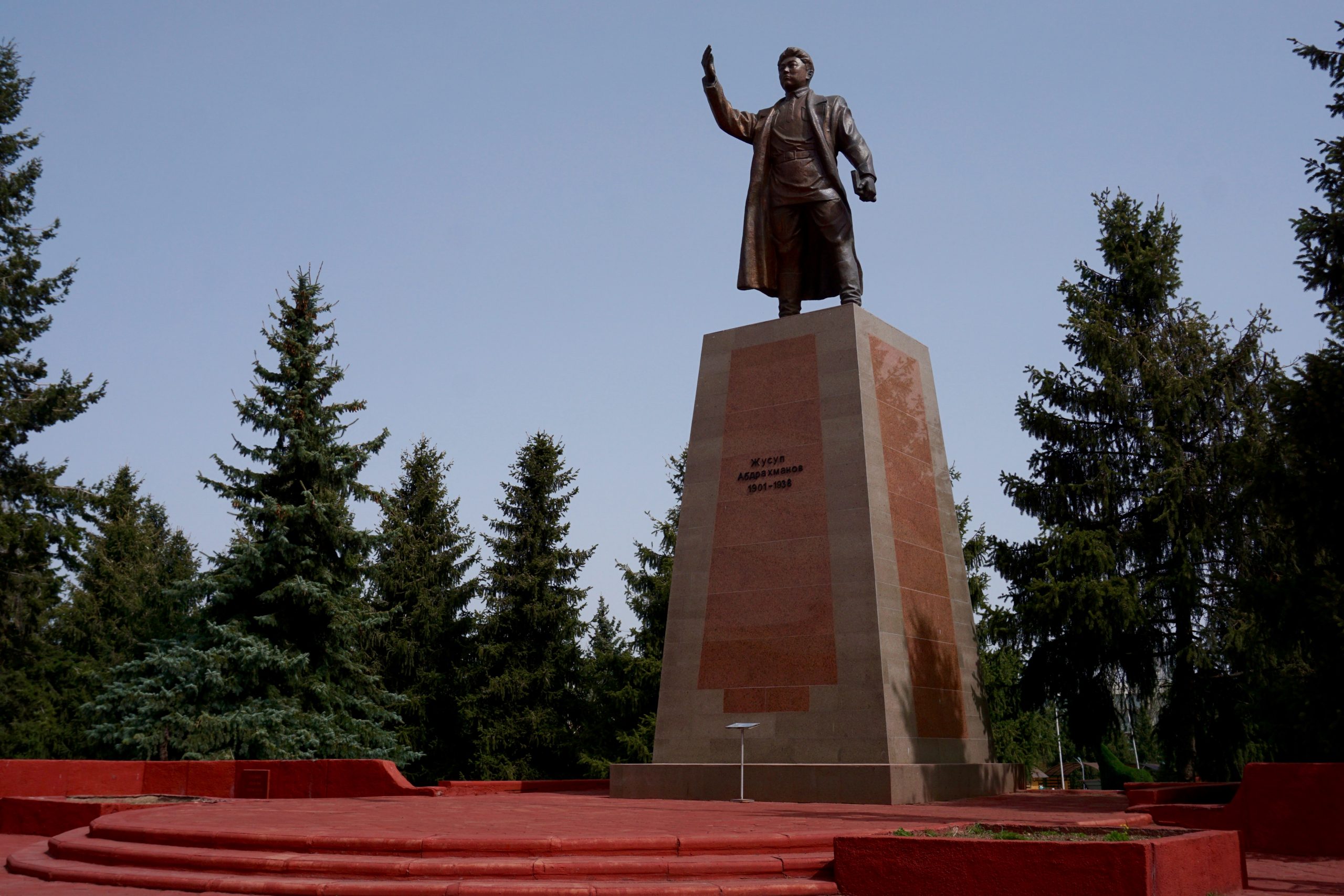 This is just a small first impression of Karakol. More about it later. Anyway, from here you can have a good look around the area – and that will come in separate posts.