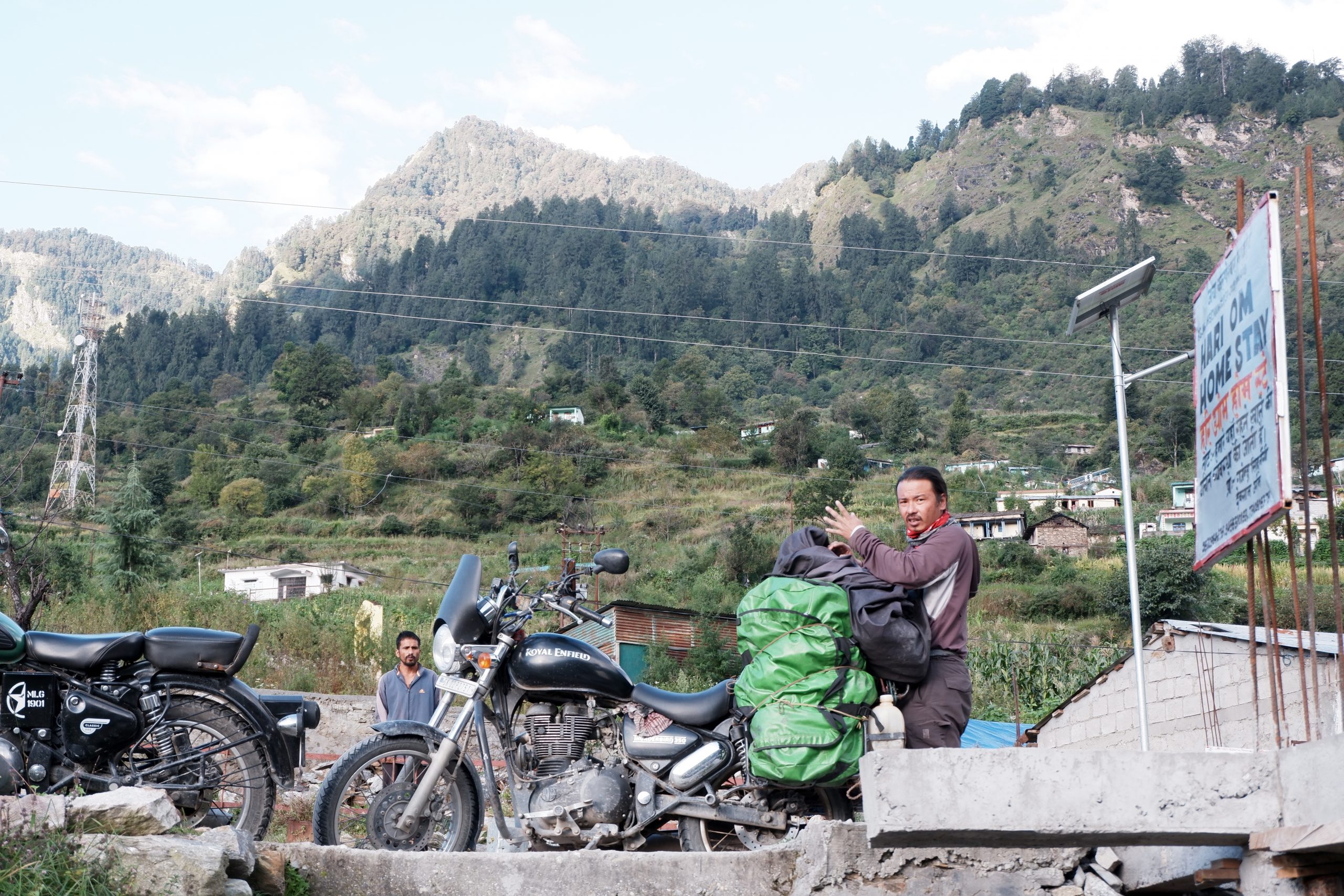 There is one temple that belongs to both pilgrimages (Panch Kedar and Chota Dham Yatra) and that is Kedarnath. In the pandava legend, where the different parts of Shiva’s body were housed in temples, this is the one for the torso. I’ll talk about the temple and all the stories and meanings in the next blog post, so here’s how we got there.

It started quite tricky in Urgam. You wonder about some things in India – in Urgam about why they built the road through two river crossings instead of putting a bridge over it or something. Anyway, the rivers are so deep that you can’t get through them on a motorbike without getting your feet wet. I didn’t feel like getting my feet wet and managed to hike around both places. Binodh didn’t fancy wet hiking boots and decided to do the bit in flip flops. And the one river turned out to be even more difficult than on the outward journey and it took him a lot of effort and sweat and 1 flip flop to manoeuvre the vehicle through. Because at some point it also preferred to be pushed. 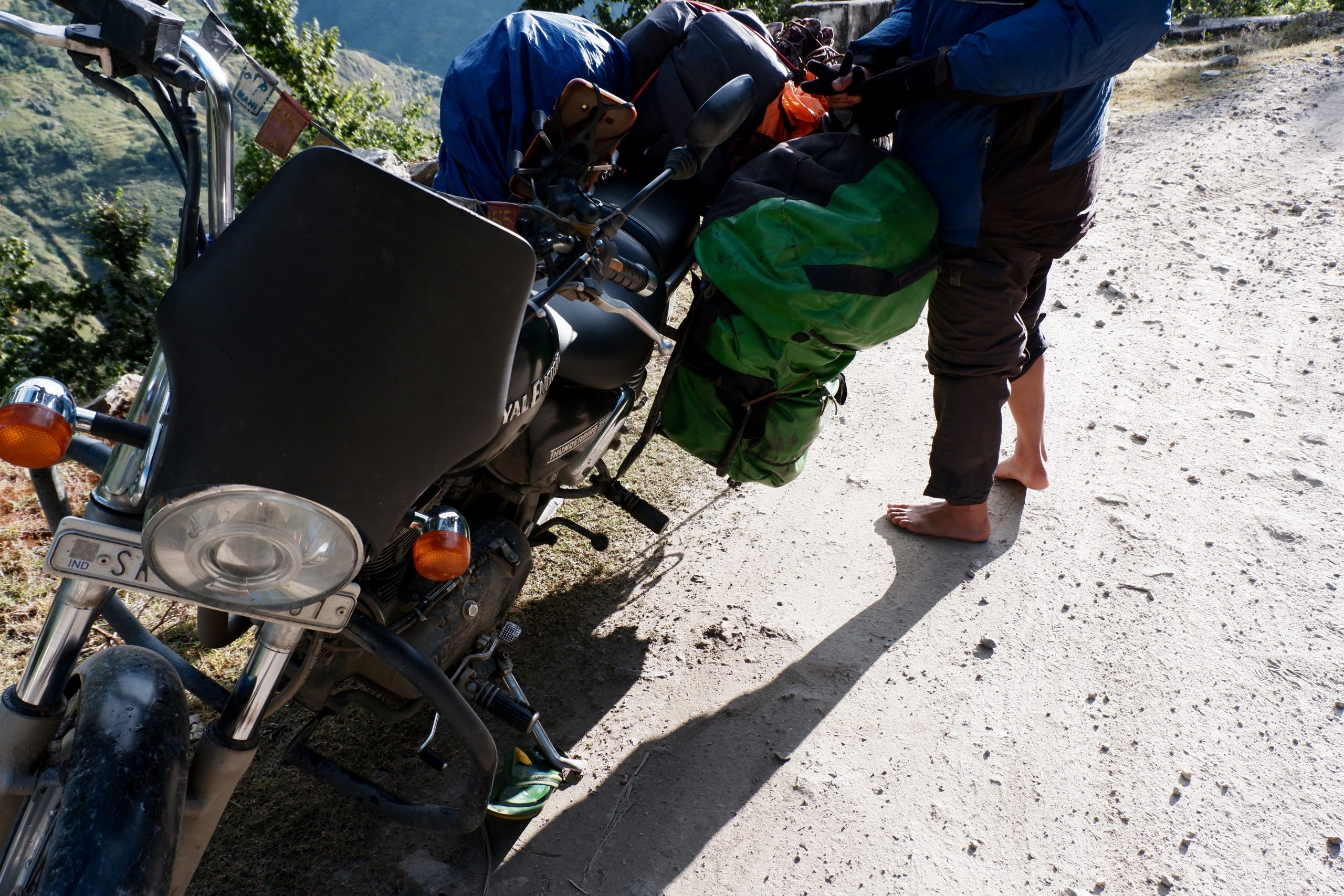 Then we had the spur road behind us. I hardly took any pictures, it was not so easy to drive. Only here at the end or beginning. I like it when you can’t tell where the roads are going. Our planned route today was about 180 km long. Usually nothing, but in India’s mountains a bit more time-consuming. Anyway, we arrived at our destination sometime in the afternoon. 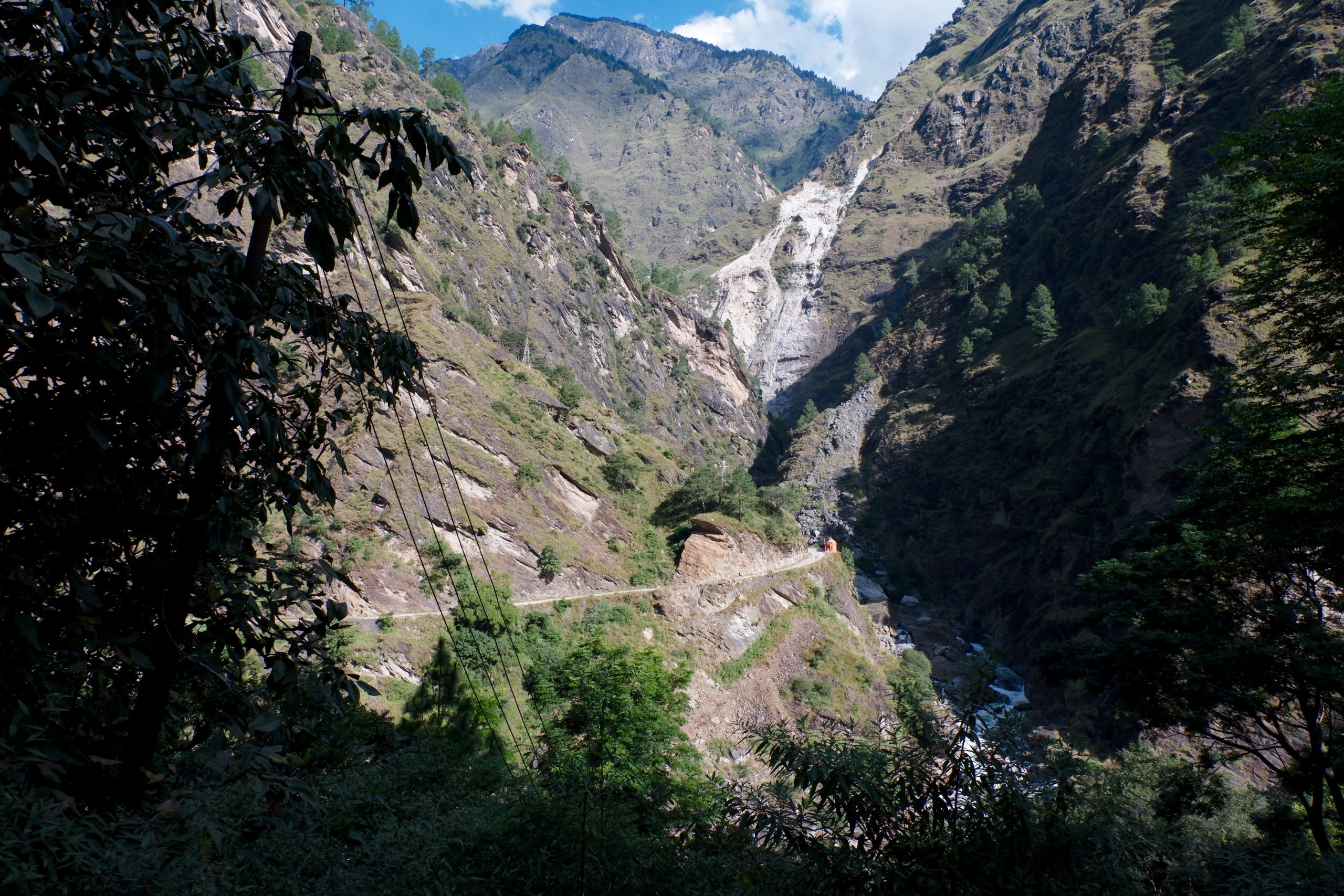 We already suspected it on the last few kilometres: it would be full. But I was completely blown away by the masses of vehicles and people that awaited us there. I have never seen anything like it! And sorry, not photographed properly – I didn’t take as many nice pictures as usual, but that’s another topic.

There was car after car on the road for kilometres. Motorbikes are great, you can drive past them. There is the village of Sitapur, where there are already many accommodations, then 1 km further the village of Sonprayag. 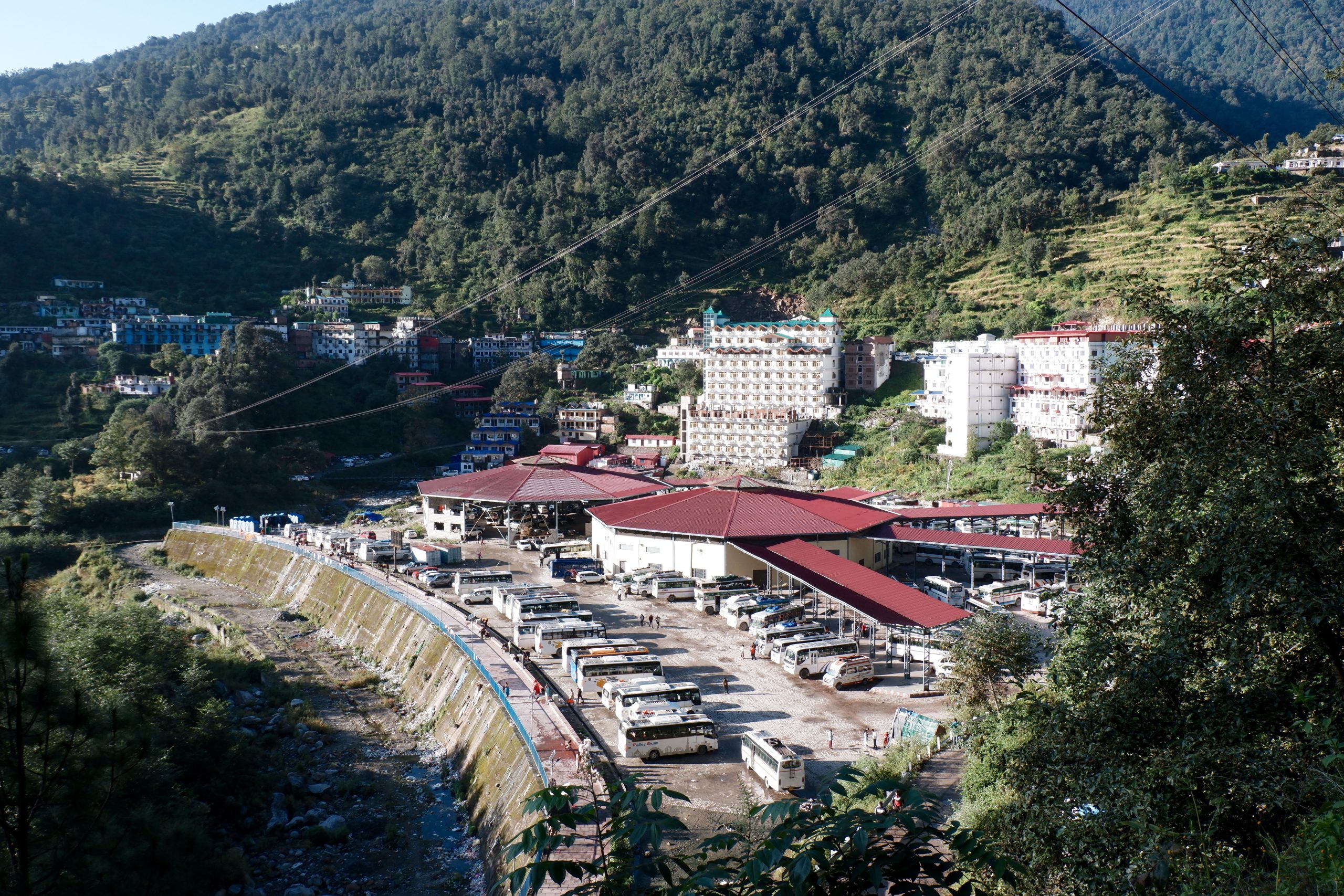 The public road ends there and everyone has to stop. There are still collective taxis as far as Gaurikund and from there only further on by foot or horseback. So everything was crammed with these cars and wandering crowds of people, where you weren’t quite sure: did they want to leave directly, were they looking for accommodation, had they already returned or how or what. What now? My desire to see Kedarnath was at zero. Binodh was a bit different: “if we’ve already made it this far, we should go there”. I let myself be pulled along – and didn’t regret it in the end. But it was one of my most exhausting Indian ventures. 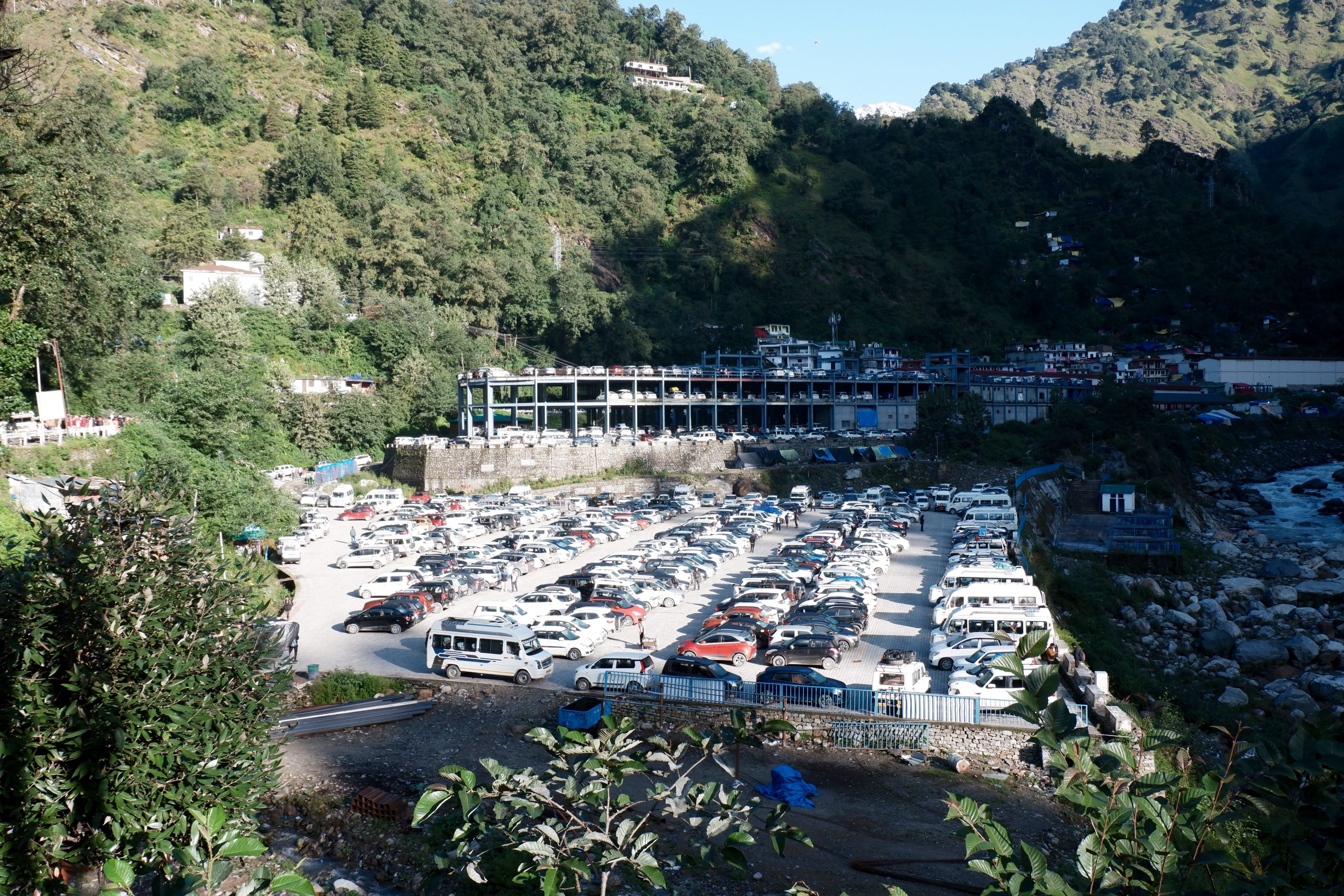 So first of all, accommodation – and there was almost only the “shabby” kind for pilgrims – noise included, of course. And I knew: I’m going to freak out if I have to go through this now. And then there was this “posh place” in Sitapur – and although it was far from our usual (price) standard, it had to be. And so I braced myself on a soft mattress in clean sheets for the following day.

This began with a 1 km hike to Sonprayag. But we didn’t get to the taxi rank at first, there was a queue. And what a queue! An Indian one! Good people lined up at the back and stayed in their seats, idiots just walked past to be right at the front. Again and again. There were protests from the good queue, which were of no use. There were police who every now and then brought in a hint of order, which was immediately lifted again. We stood. Moved forward a bit. We stood. We became entangled with people. Made friends with 10 nice men from Odisha. Stood. Sweated. Got a cup of tea. Got 10m. Stood. 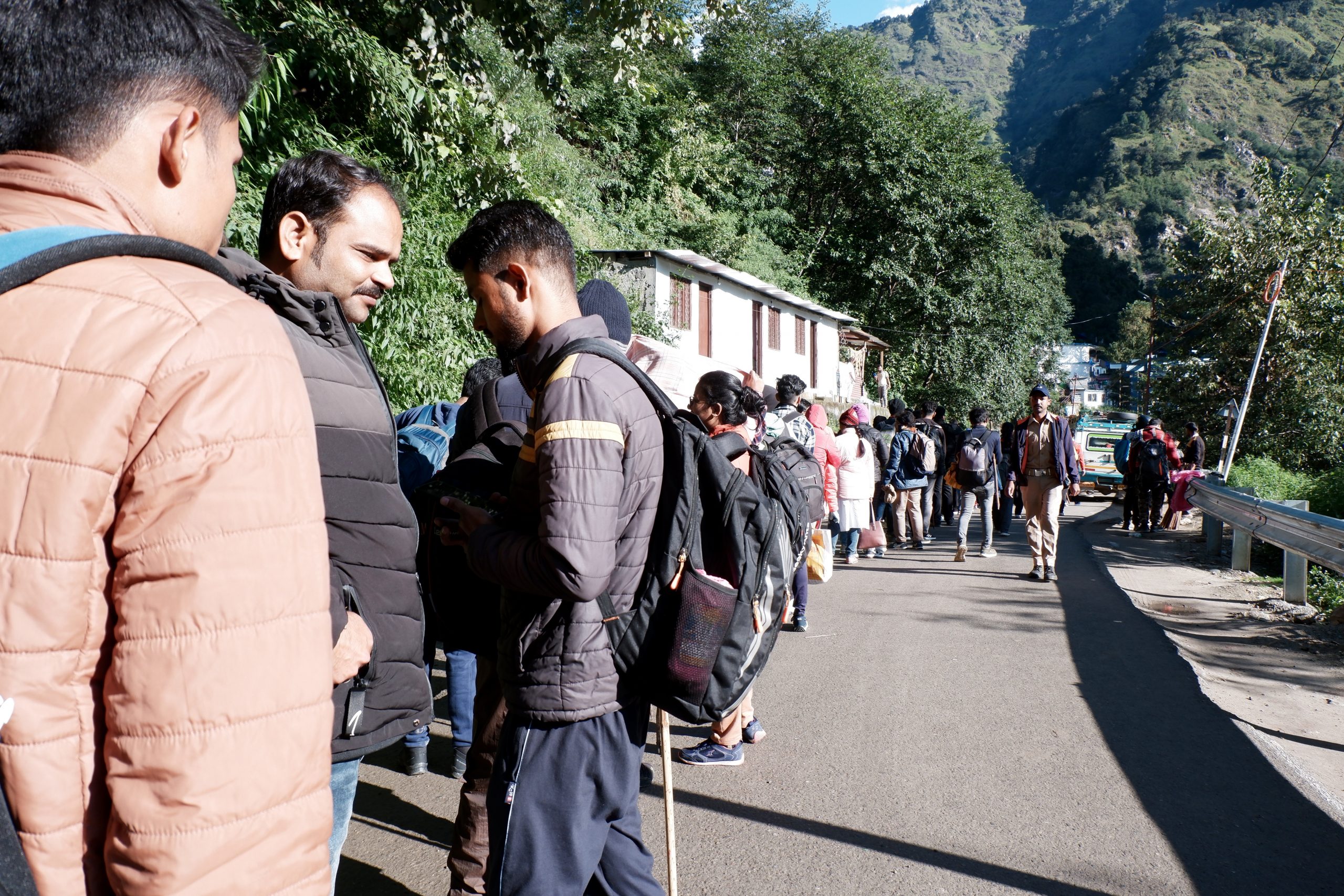 And after 2.5 hours we reached the taxis, which were far too few for those willing to drive and eagerly drove up and down. When they arrived, all the doors were ripped open and people rushed to get seats. Hardly a chance to remain polite. 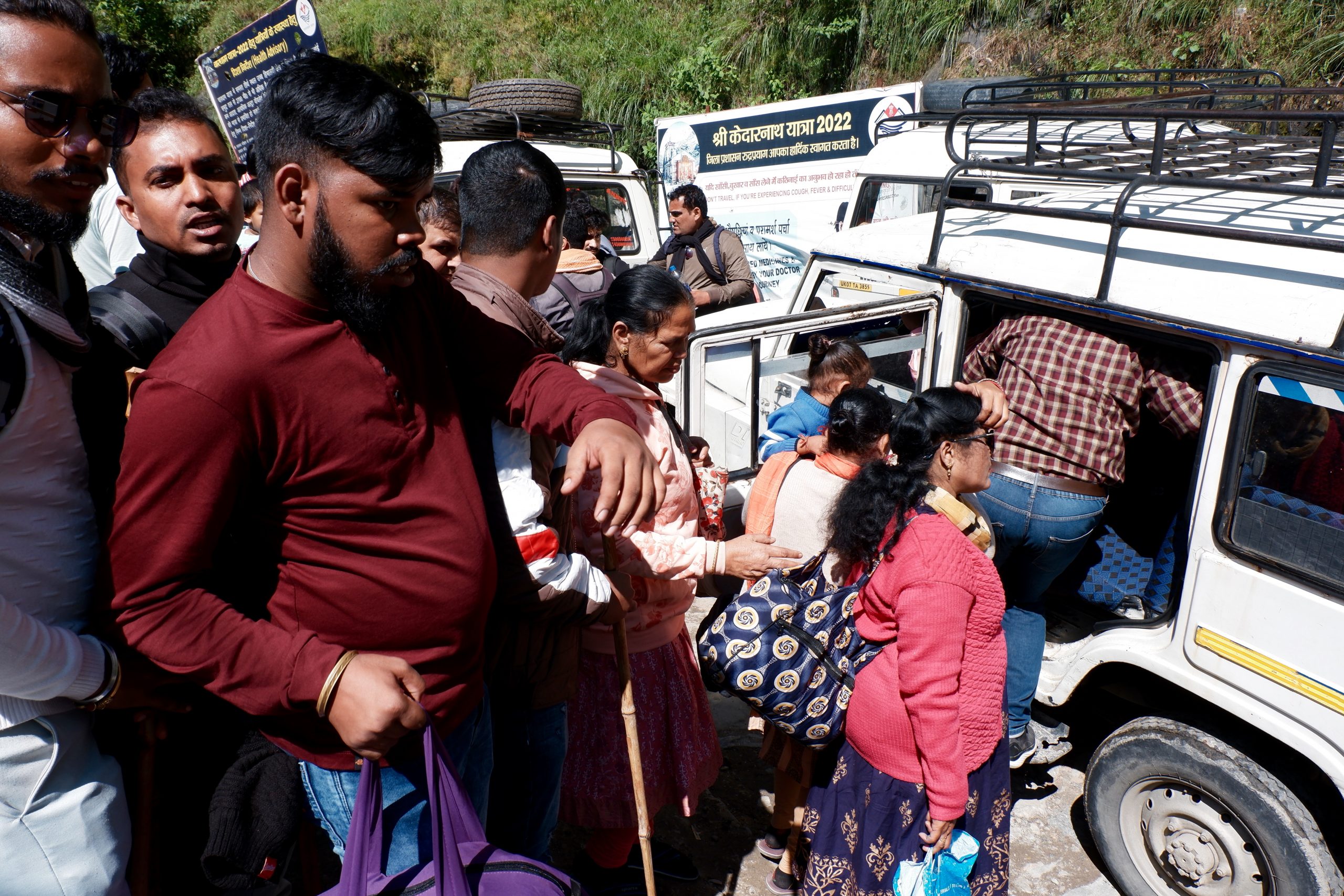 And at some point we were actually in Gaurikund and ready for breakfast. New obstacle: everything was closed. Someone had died and out of mourning all the doors remained closed. Only behind some blinds was activity suspected, we crawled through down – and found ourselves with a mourning breaker who fried us Alu Parantha. 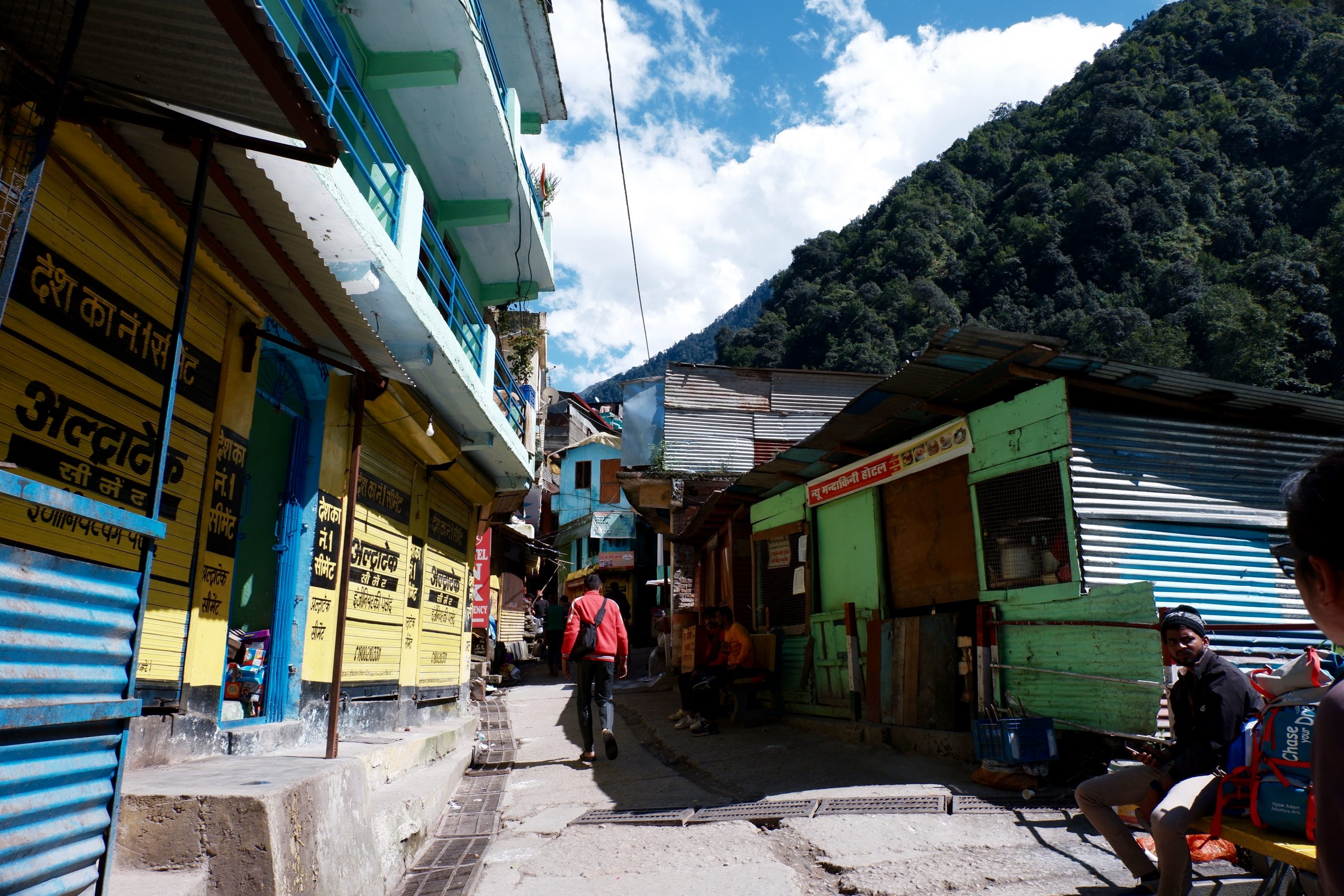 By now I was so sick to my stomach, the time was 11:30 and I knew that – especially with these crowds – I wouldn’t make 16 km and 1,500 metres of altitude. But there were horses! So: me on horseback and Binodh trudged off, he’s fitter than me. Horse was not really joy and pleasure, but at least I was enthroned above the crowds and horse carried me up. 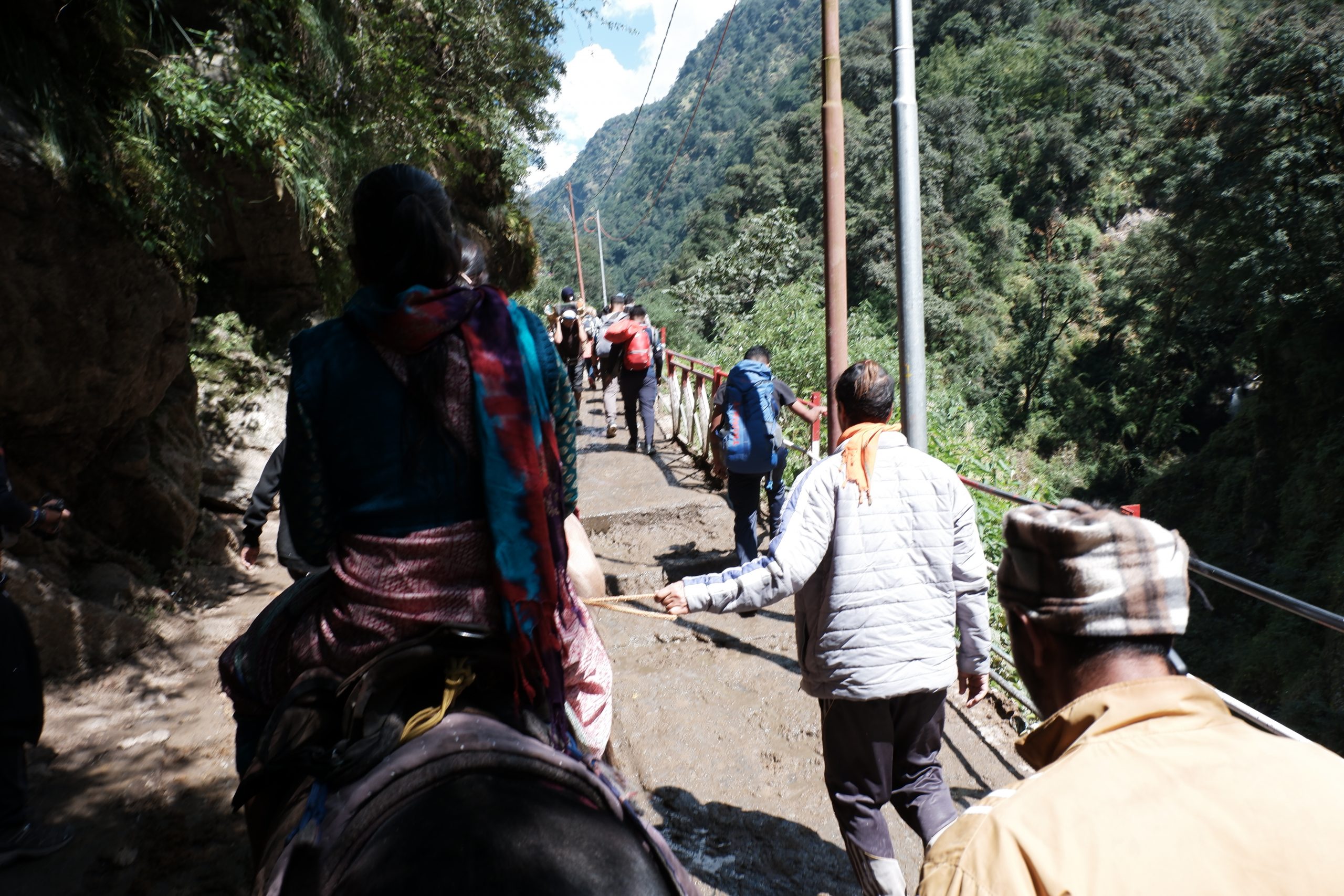 start for sitting on horse 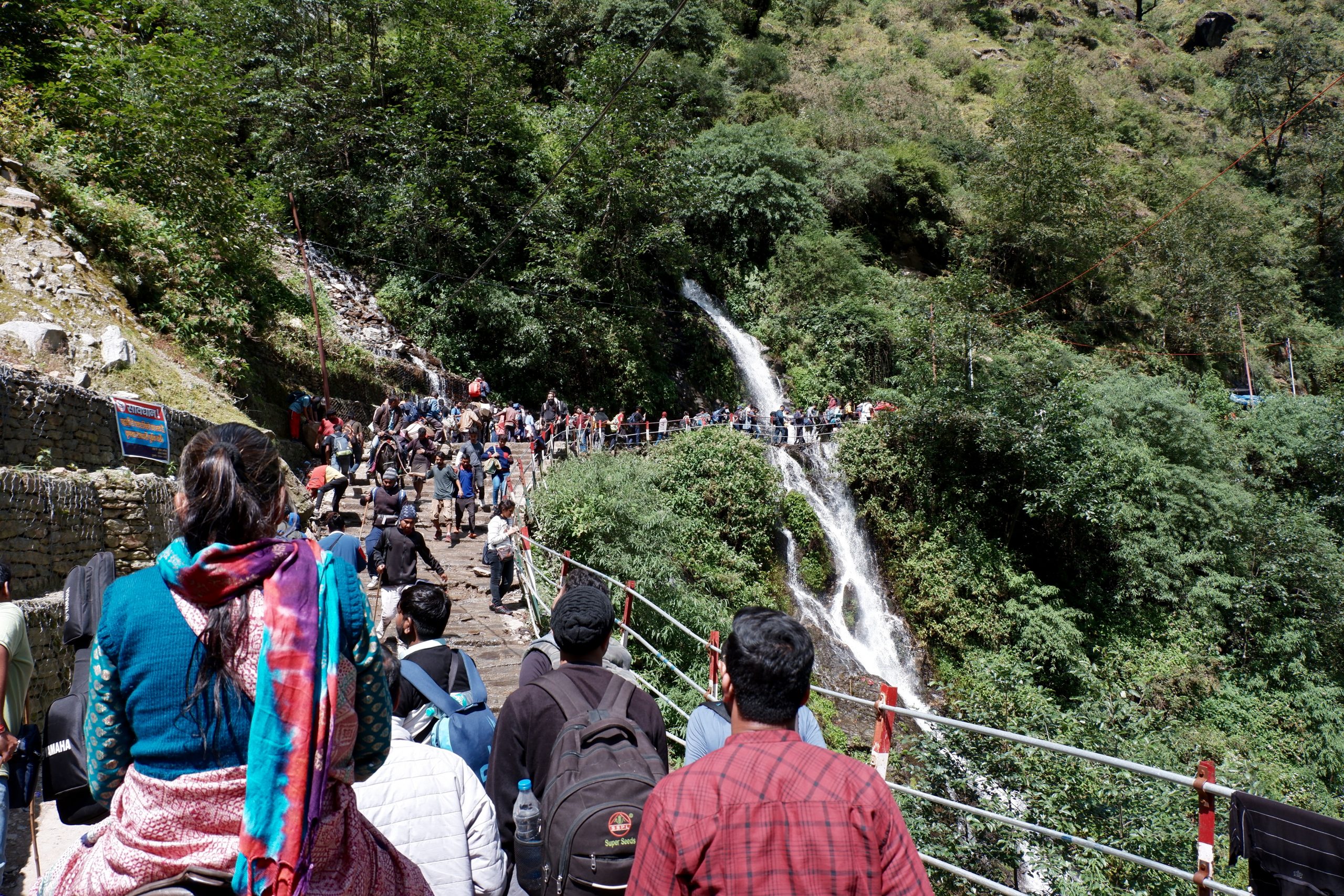 Horse makes its way through crowds of people 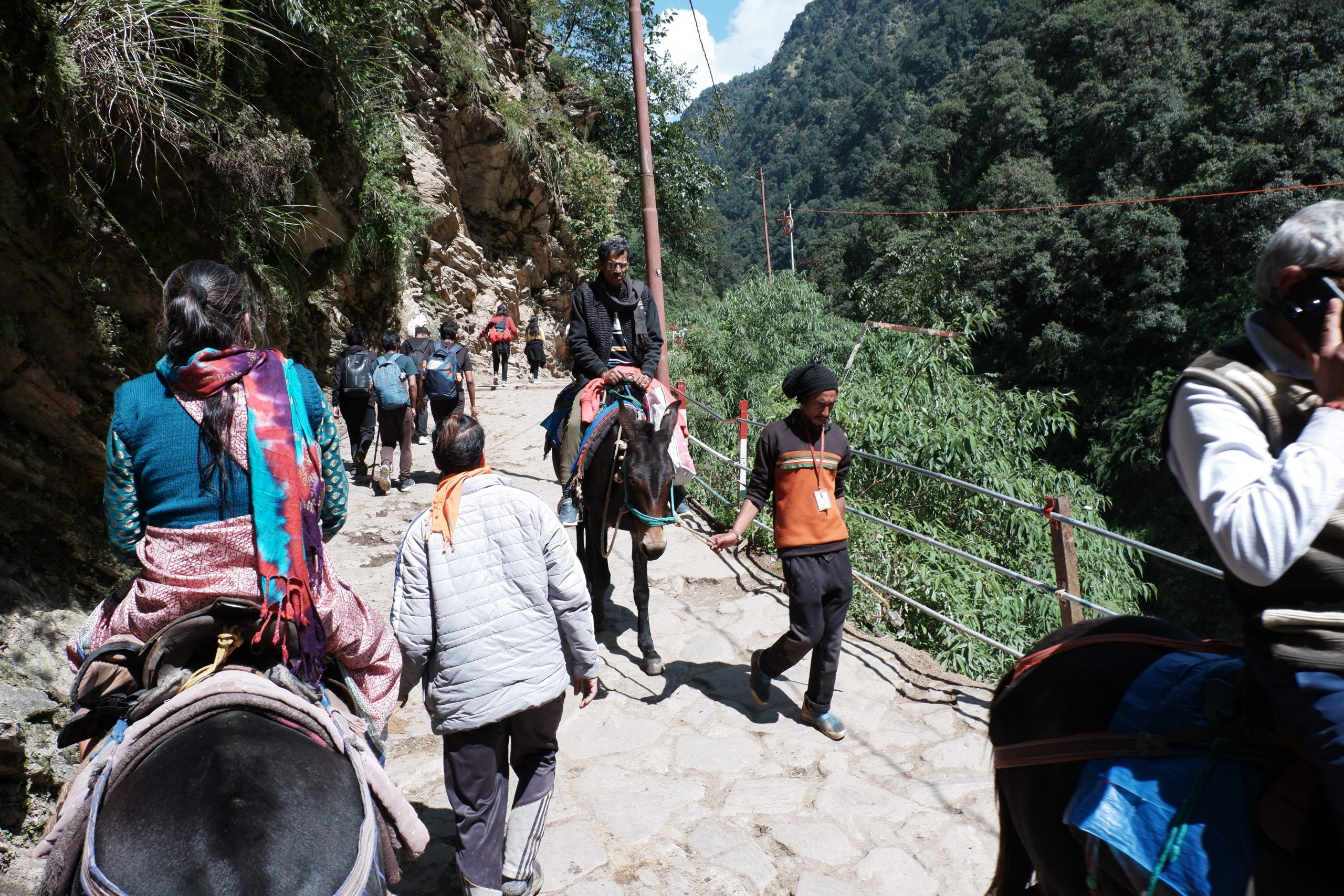 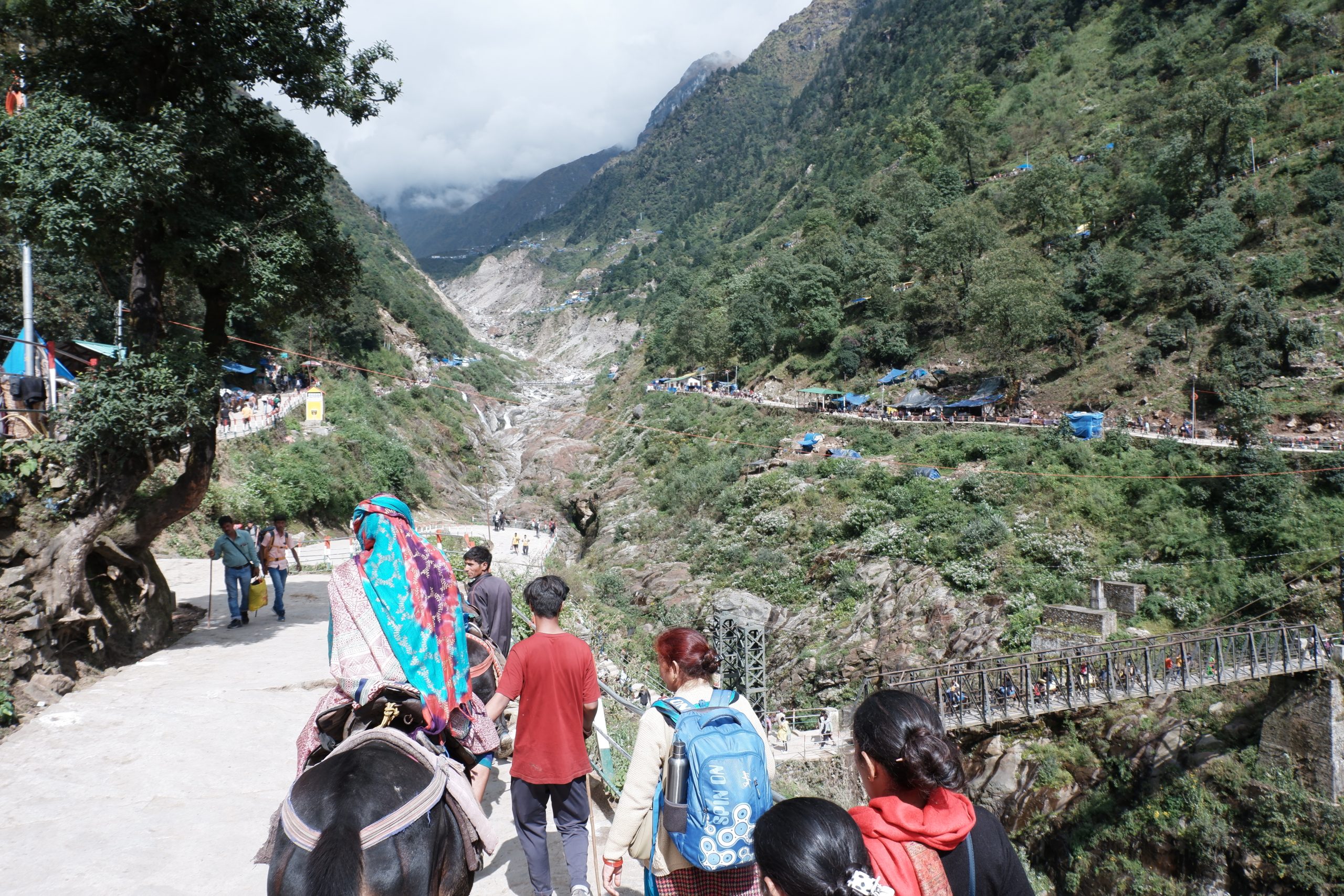 in the back high up the goal

There were 2 horse people with 4 horses together, who went up together. My riding companions were these 2 women and the 1 gentleman: 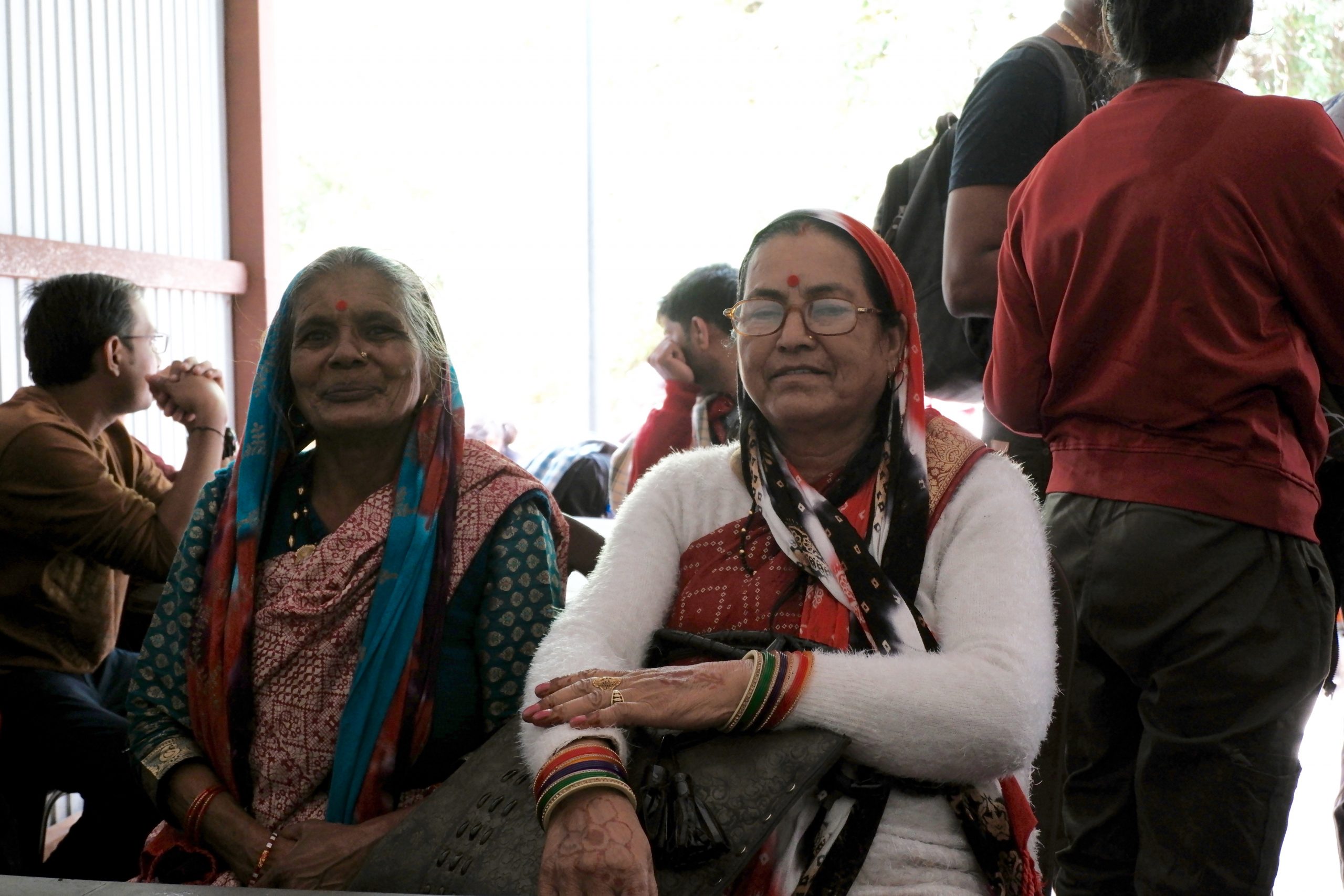 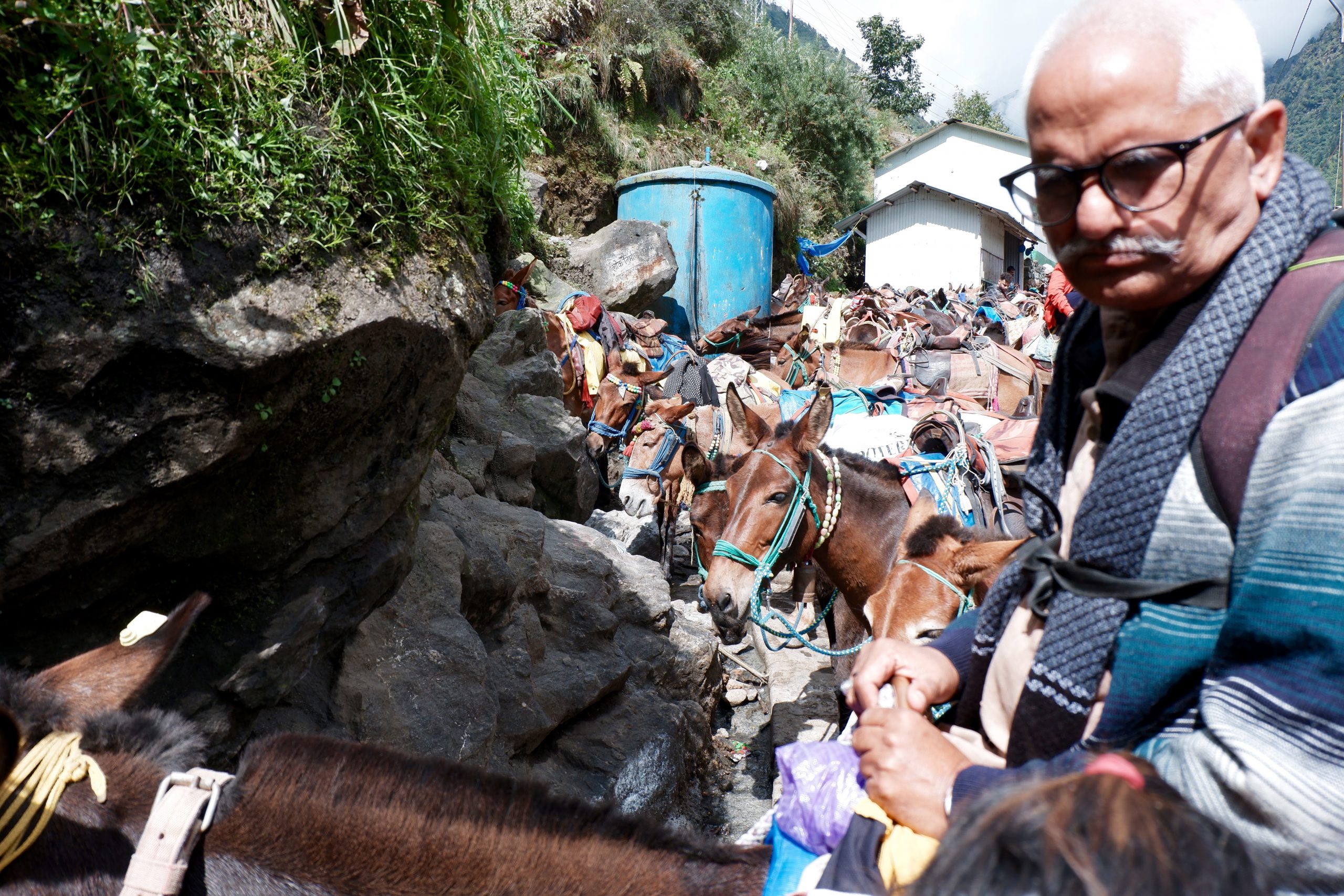 There was a lunch break and otherwise we hurried upwards – especially as the sky was also closing in. It was cold, it drizzled, there was no break for rain jacket or umbrella, relentlessly for the poor bones it went on, on, on. 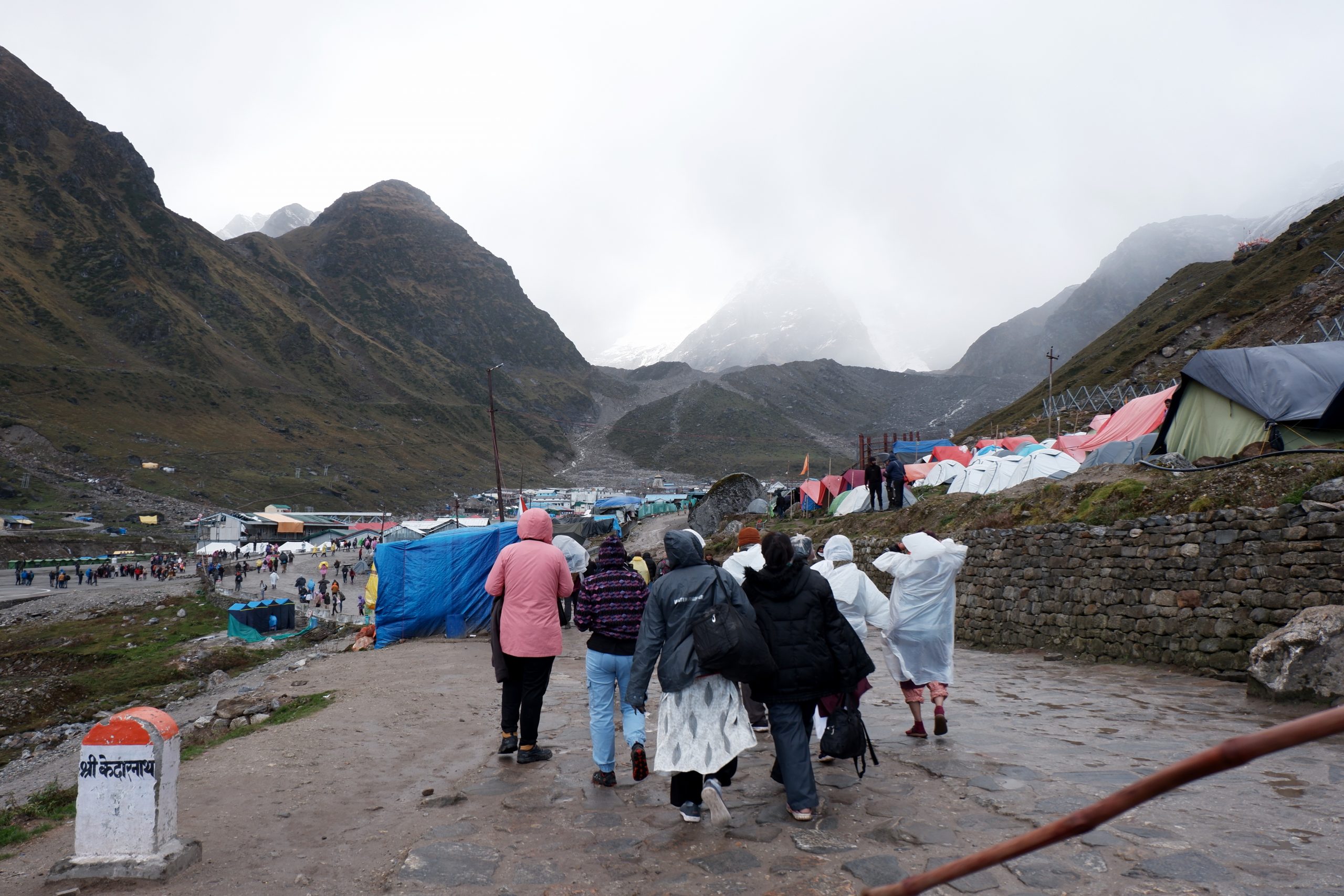 Finally I could dismount, shook my stiff limbs, muffled myself in warm clothes, stretched out the umbrella and hurried off in the direction of the temple and accommodation about 2 km away. But would there even be that many beds? Was I lucky? I started walking.