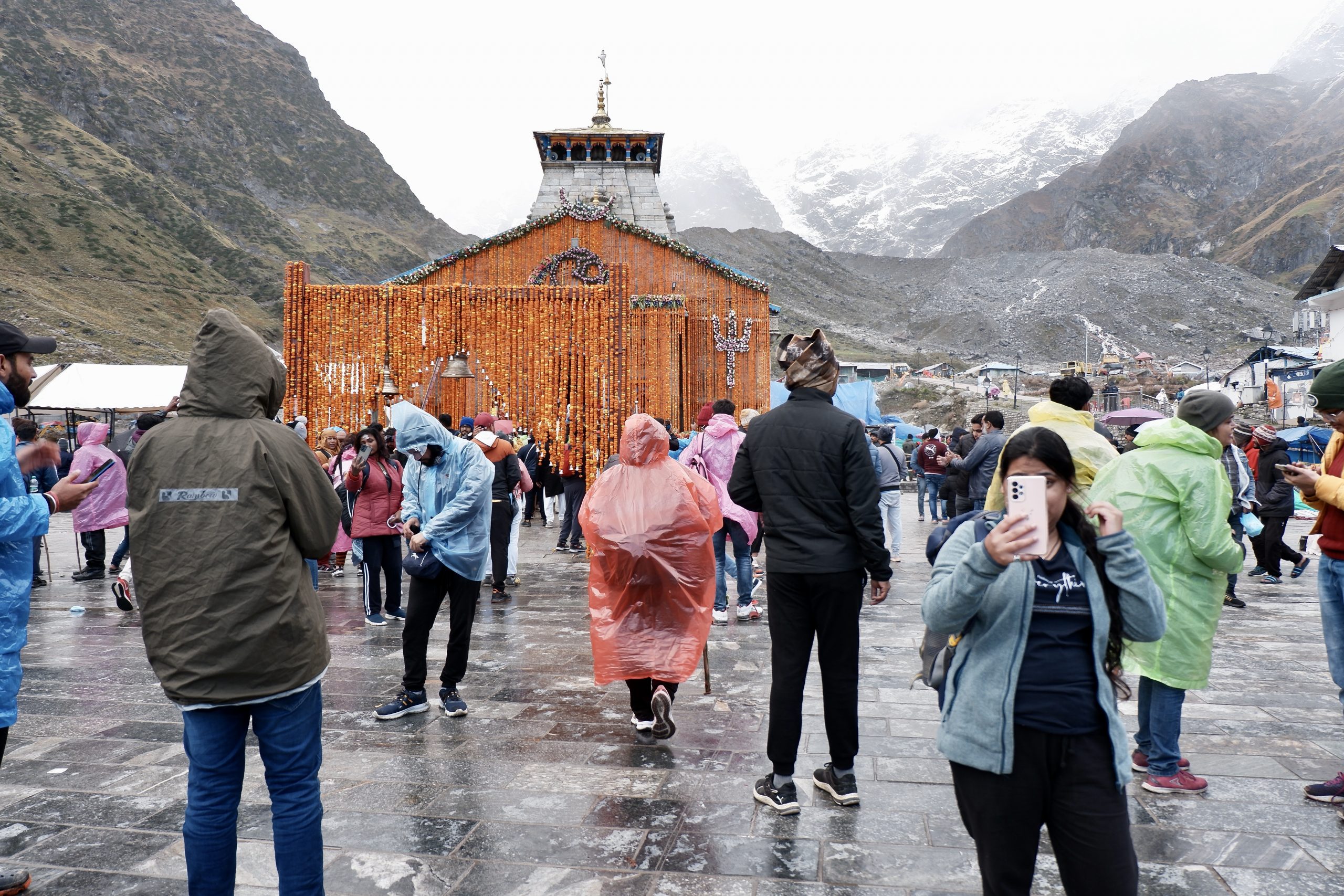 Better dressed now, I went to the temple with these many many people. Many of them joined the long queue for the inside of the temple. Not me, I just walked around outside for a few pictures. The temple was nicely decorated and you could also see nicely decorated/painted saddhus (holy men). 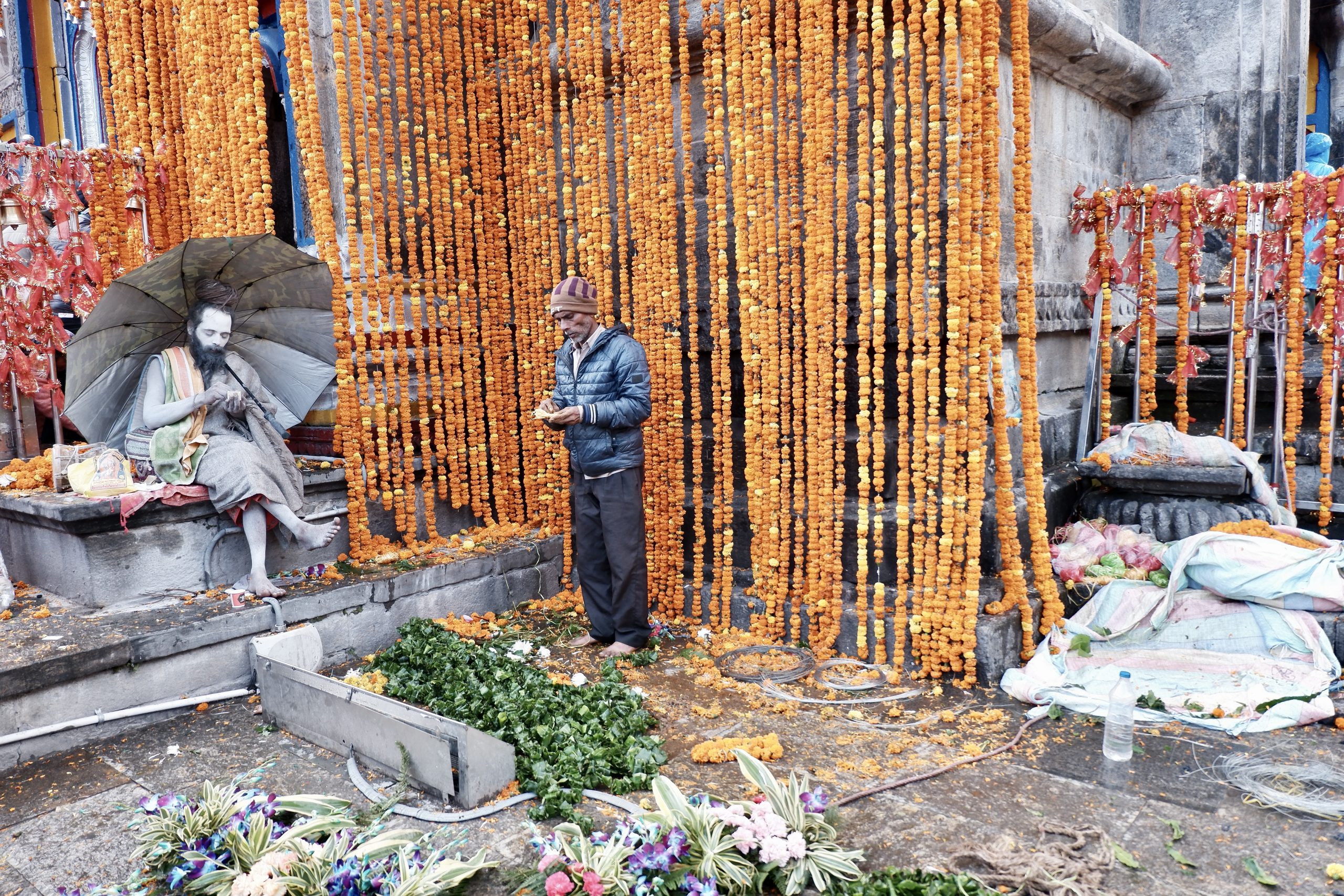 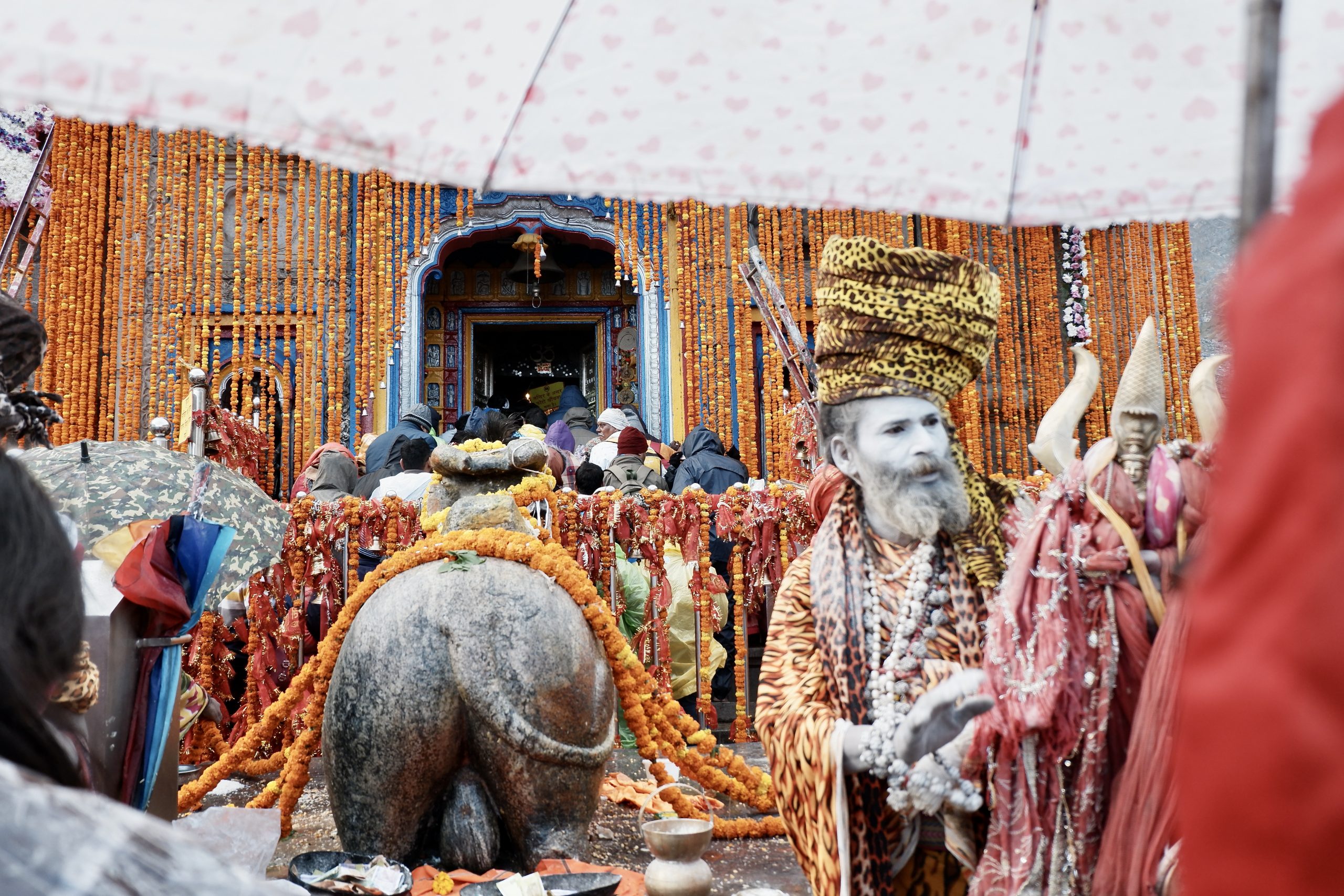 Saddhu in front of temple

Unfortunately it was a bit drizzly, but nevertheless it was clear that the temple has the most amazing location. It is enthroned on a ledge directly below the ice giants. 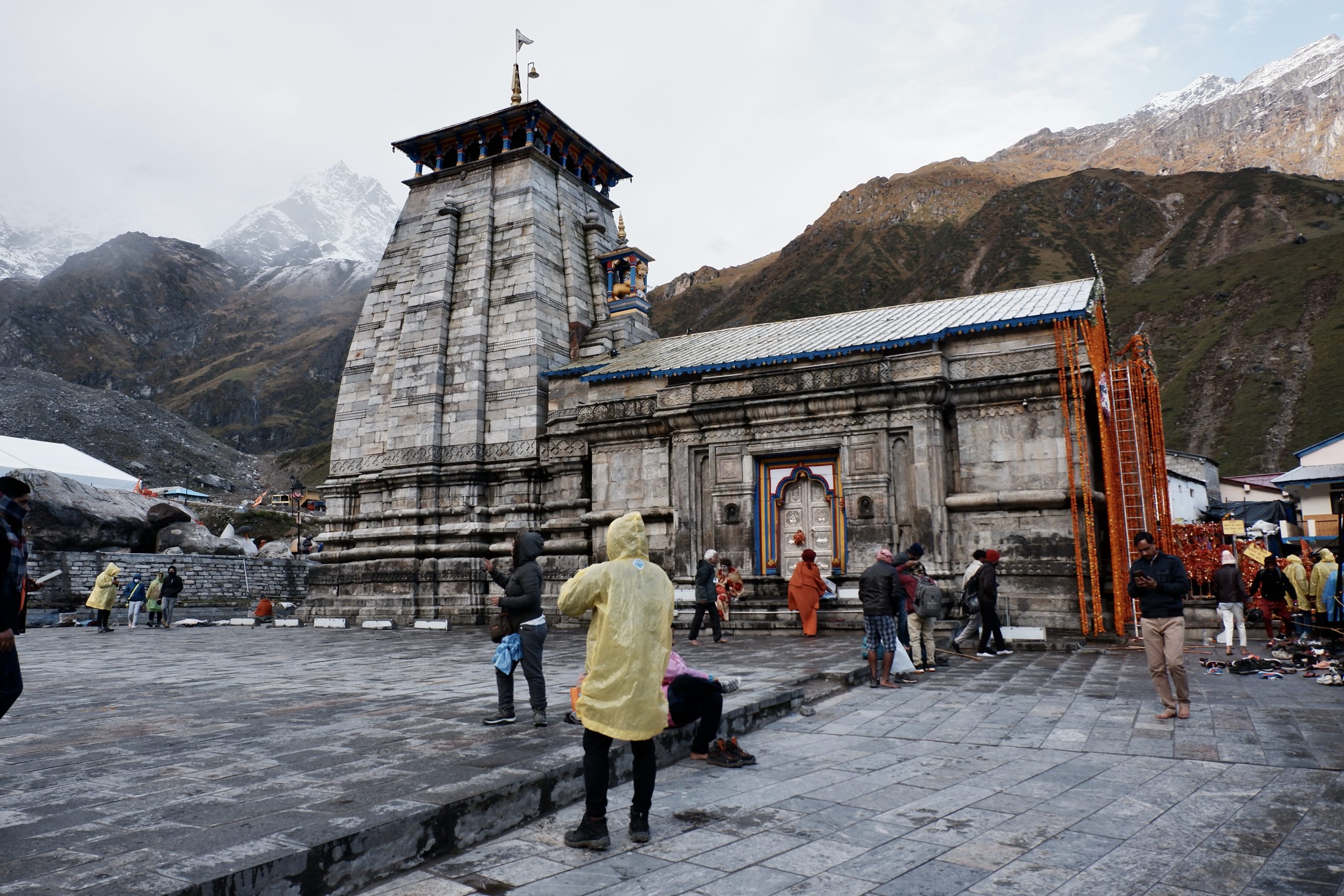 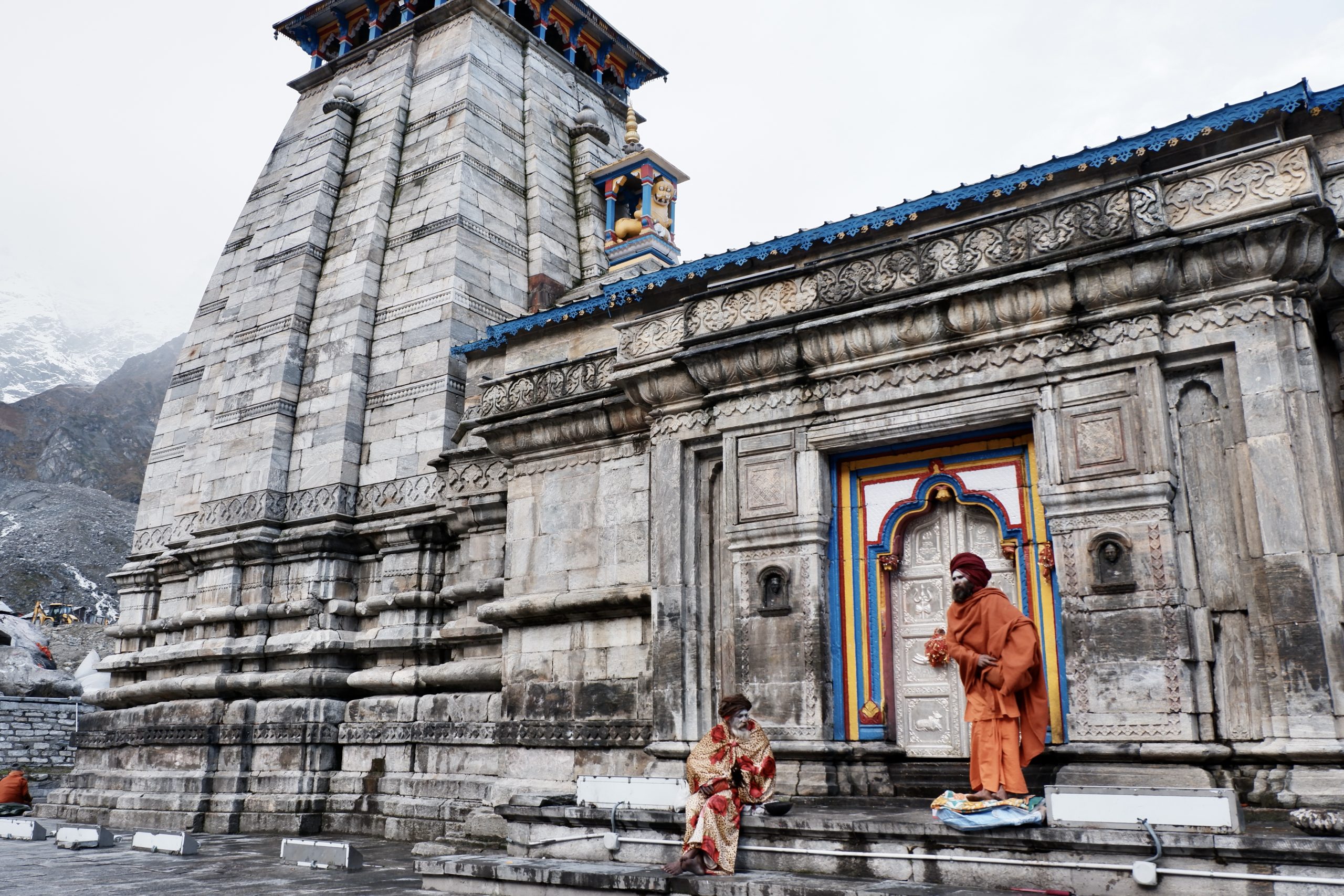 There is again a story about the temple. It belongs not only to the Panch Kedars and the Chota Dham Yatra but also to the Jyotirlingams. These are 12 very special shrines in India – plus 1 in Nepal (Pashupatinath). Brahma (the creator) and Vishnu (the preserver) once argued about which of them was the greater god. Suddenly a huge pillar of light appeared between them and one (Brahma) flew up as a white swan to find one end and the other (Vishnu) dug into the earth as a dark boar for the other end. However, both were unsuccessful, there was no end to be seen. Brahma, however, wanted to win at all costs, even with lies and deceit, and grabbed a flower and said that it was from the upper end. This went too far and Shiva himself stepped out of the pillar and scolded that neither of them was the greatest, but Brahma had really behaved disgracefully and he decreed that he could no longer be worshipped with his own temple.

This pillar of light, on the other hand, manifested itself in smaller forms 12-13 times and temples were built around it and these are now the Jyotilingam temples. 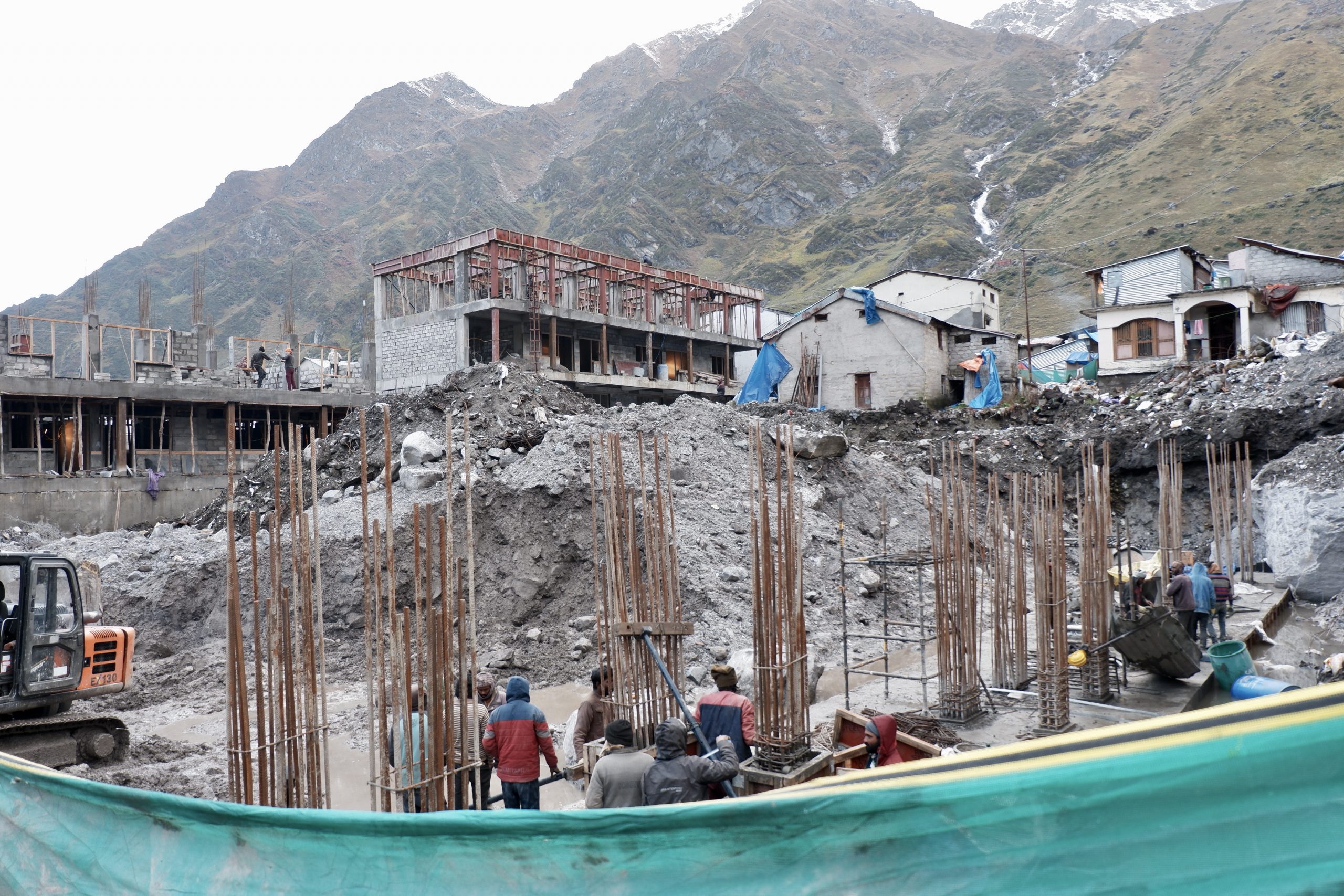 Then I started looking for accommodation and was unsuccessful. All the rooms in the houses were full (you can also book the tour with a tour operator and then you have a guaranteed room, for example), more people were wandering through the area looking for accommodation. But on the way between the horse and the temple, there were quite a few tents, probably for all the other homeless people. 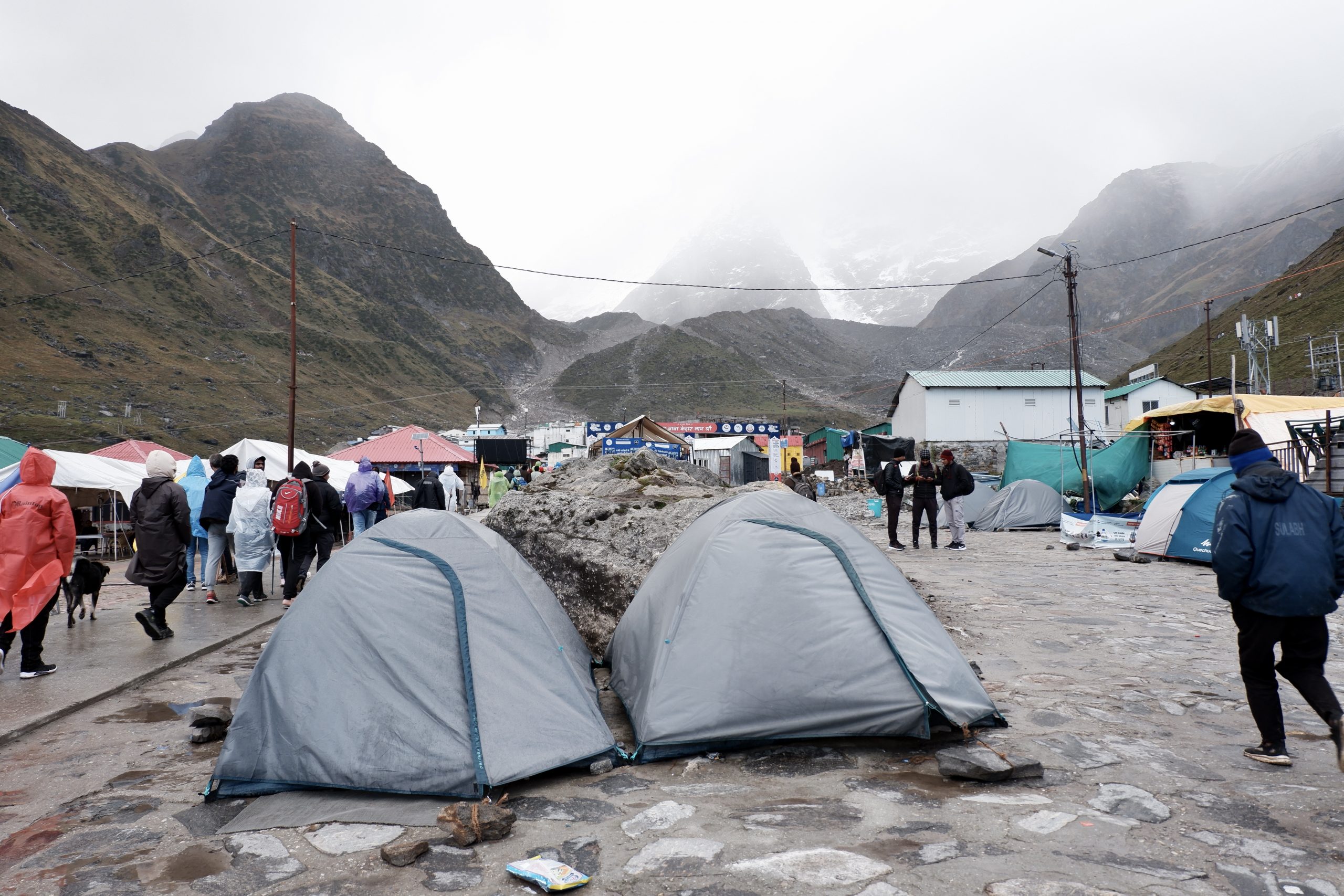 I went down again, met Binodh and we started the search together. Or better said Binodh started and was successful almost immediately. A tent with a thin base was refused, but the employee there sensed a little extra income and offered us his tent in which he lived for the season. It was more or less a noble tent with thick underlay, various layers to put over it (it was clear that the night would be cold – but I didn’t freeze) and even electricity with light bulb and charging sockets.

And in the morning the world looked very different. A blue sky! A great mountain world! And I had a headache due to altitude. We were at 3,580 m, so that can happen. 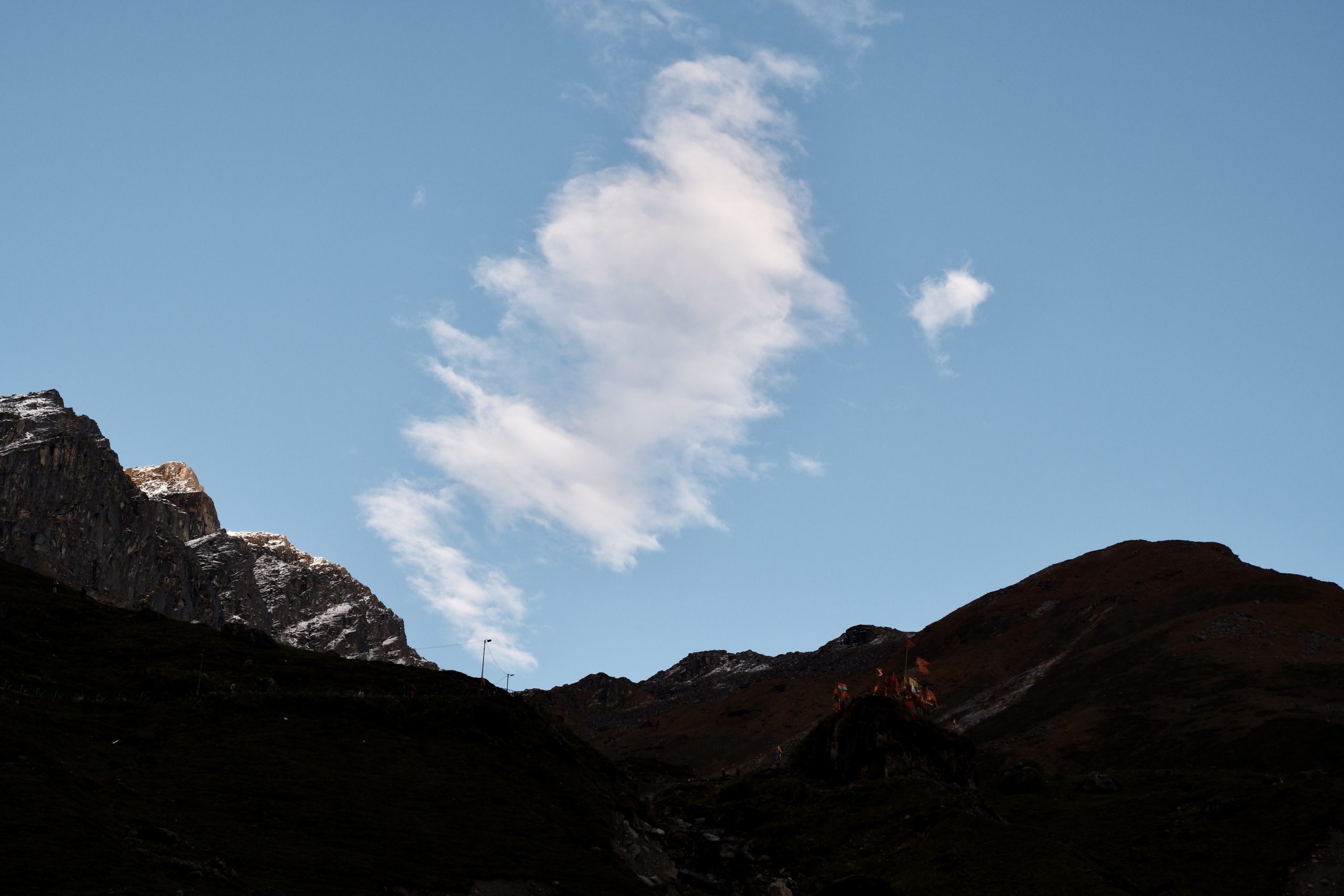 Binodh went to the temple and me walked a little outside 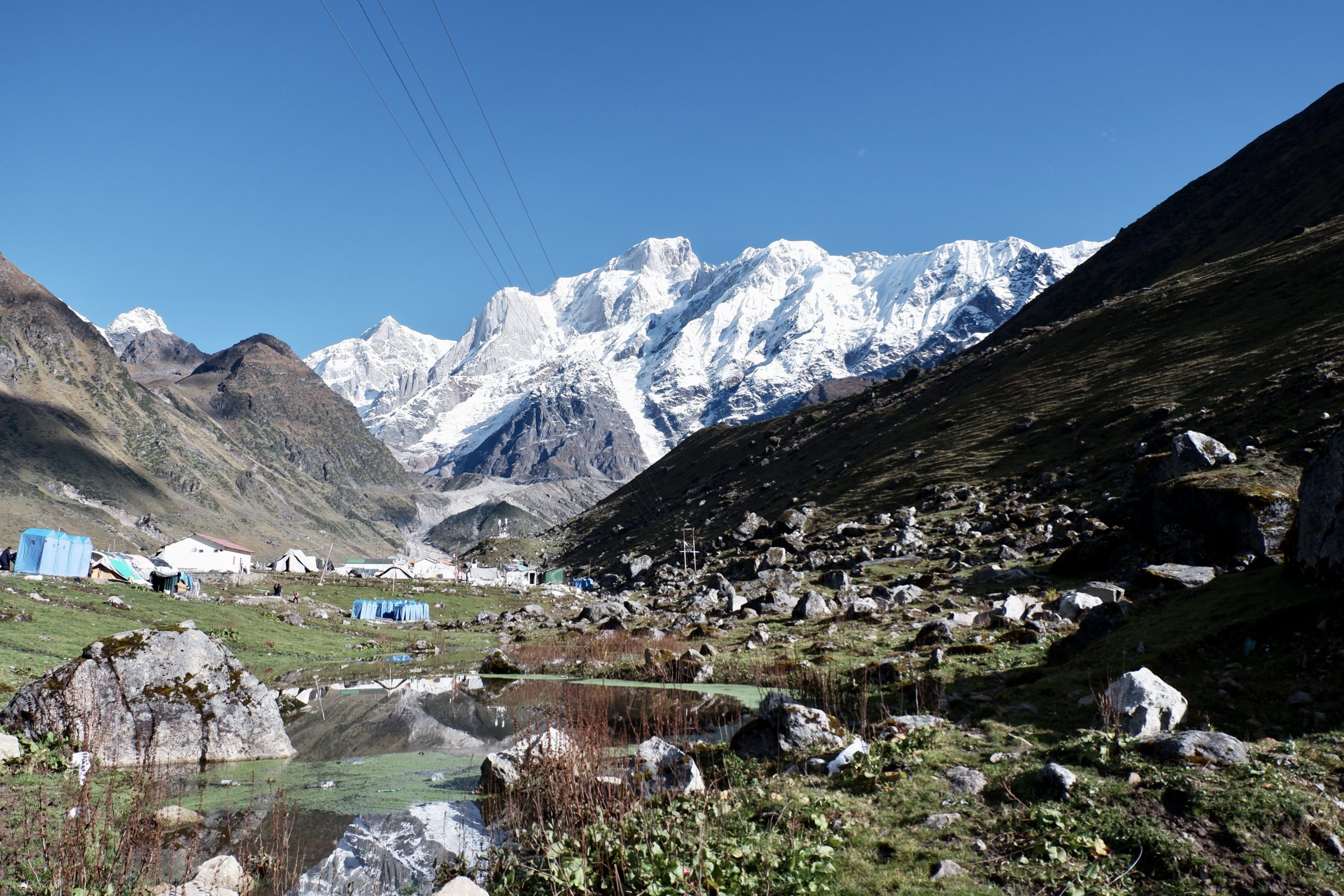 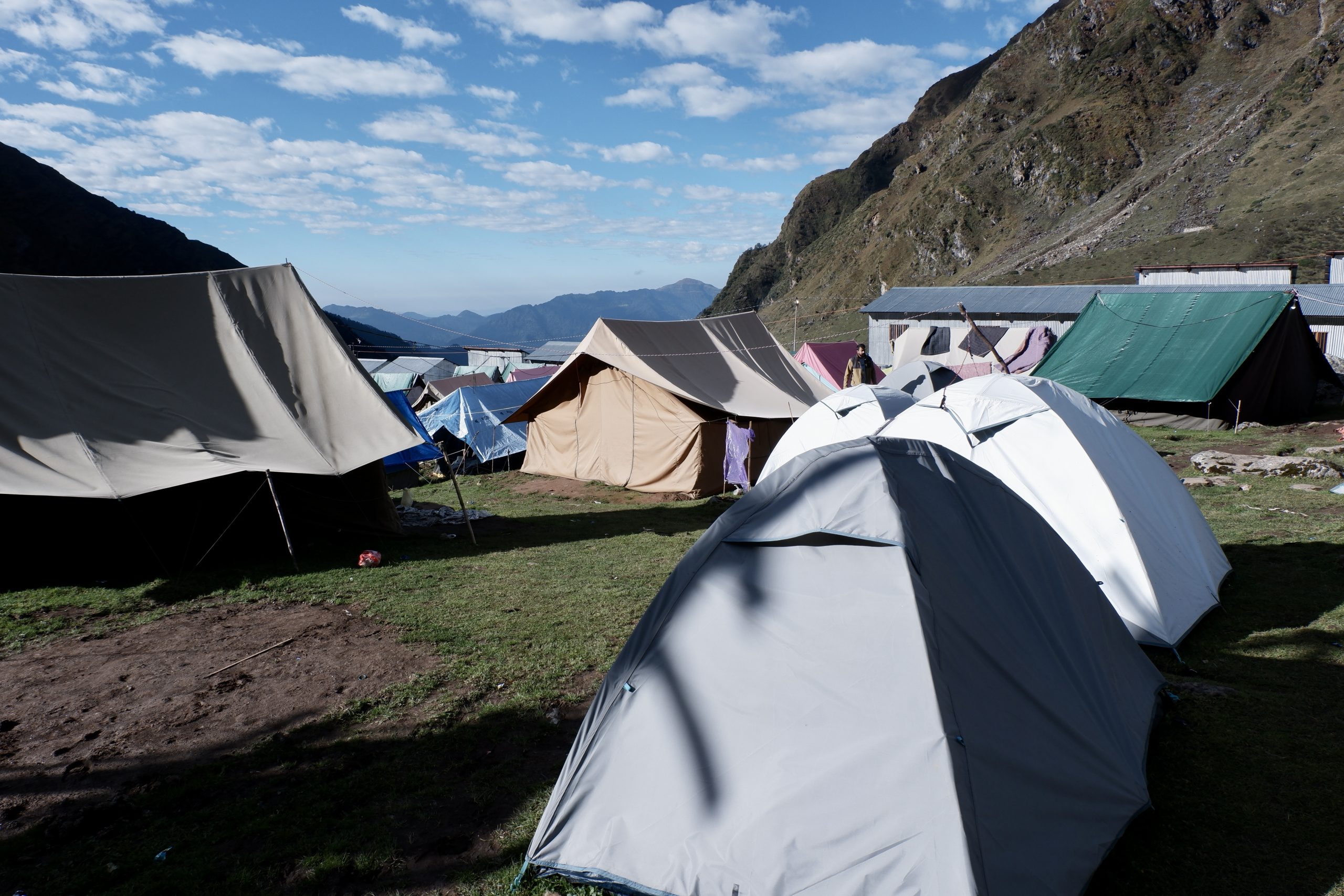 most beautiful tentworld in other direction 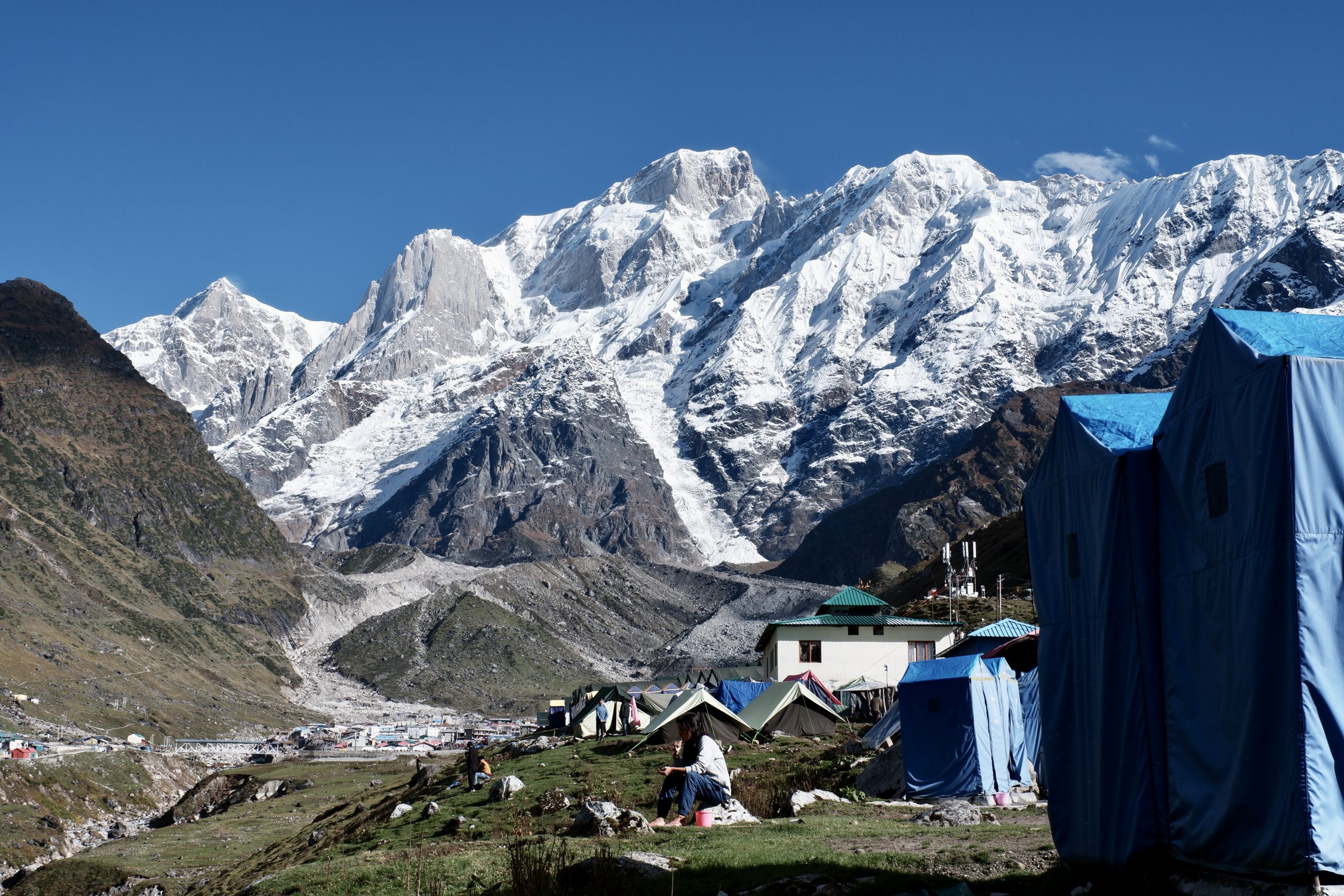 and again direction mountains, tent-toilets to the right 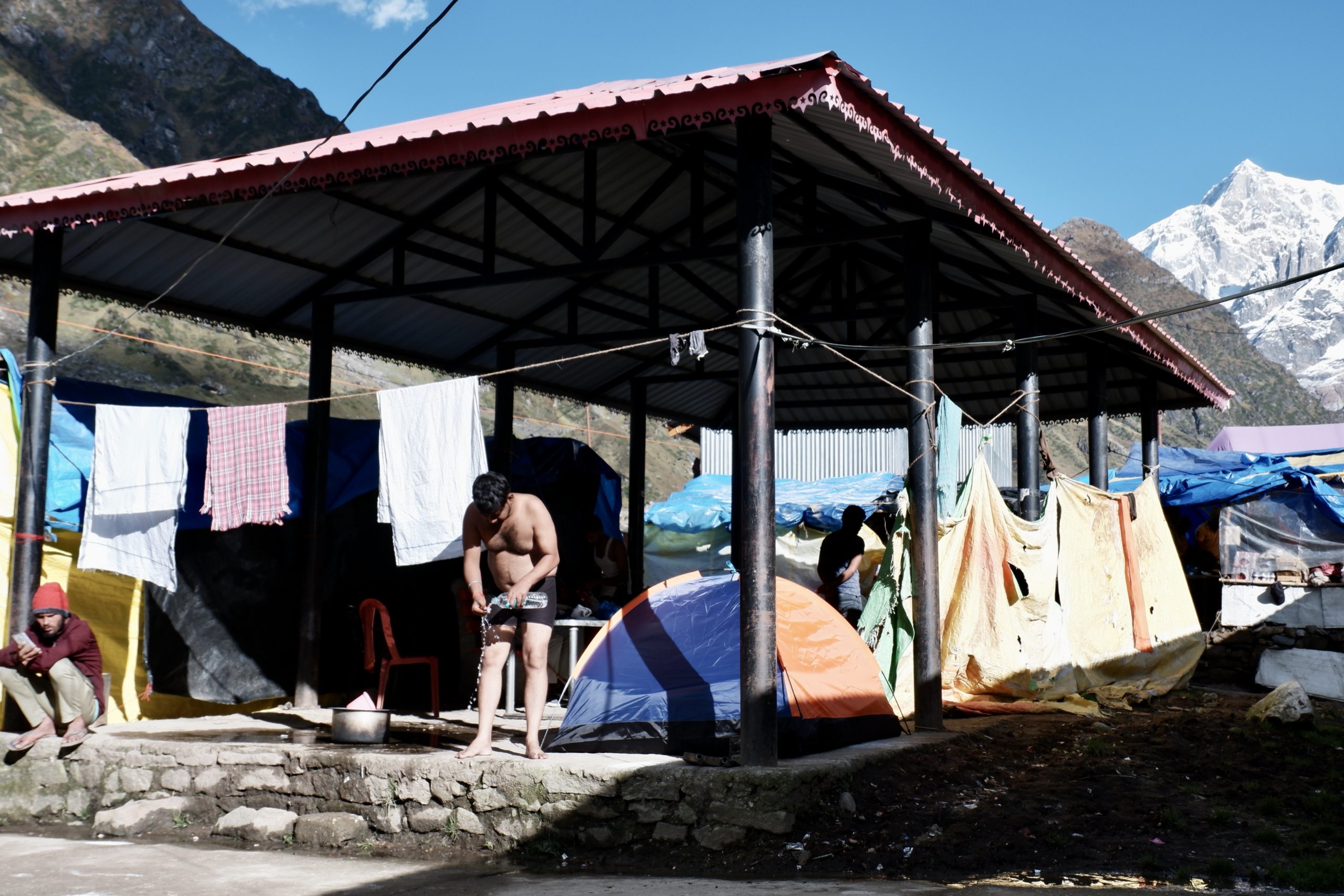 There was a lot of activity again. People were doing their morning toilet, going to the temple, people were walking towards the valley, people were drinking tea, a nice hustle and bustle. 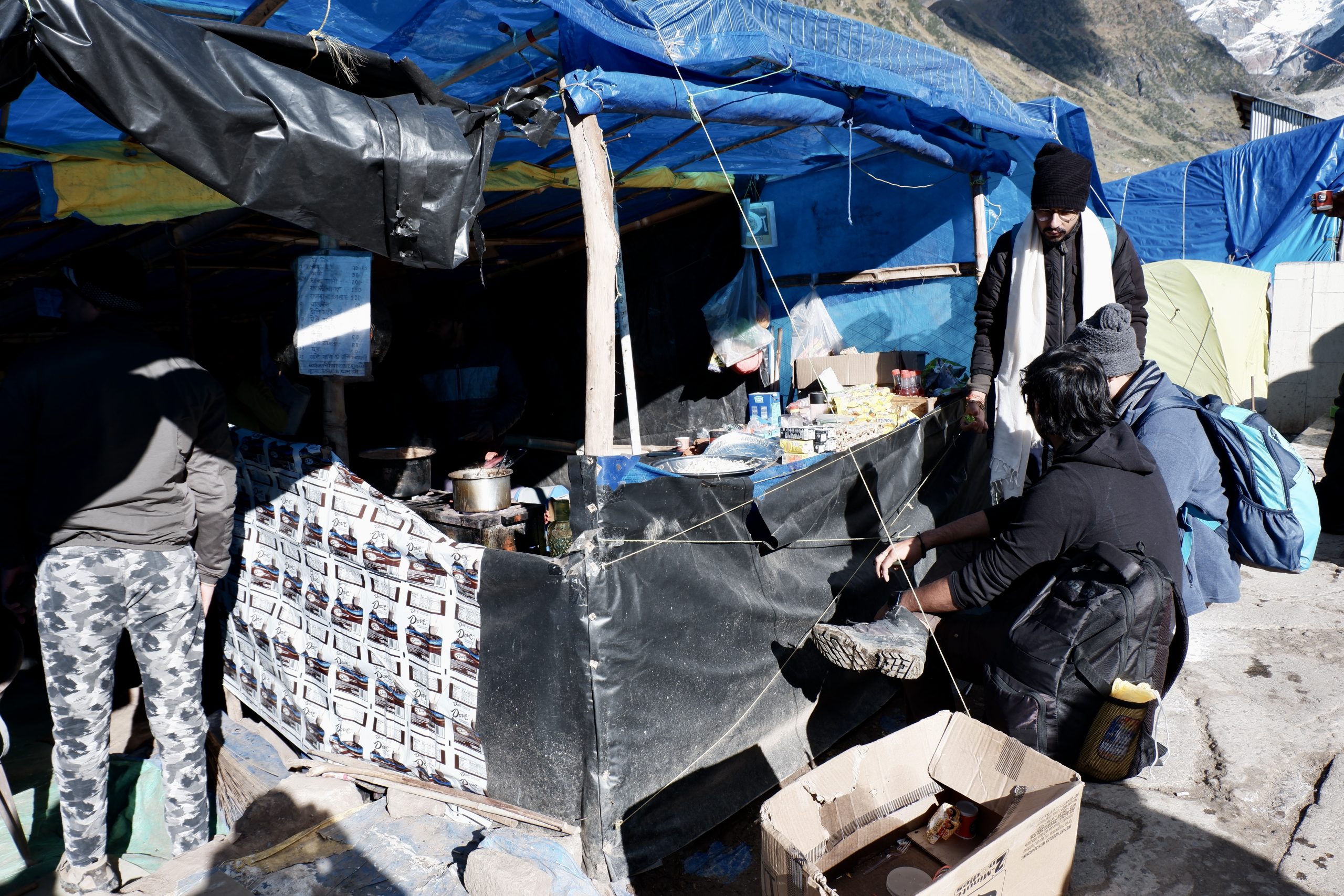 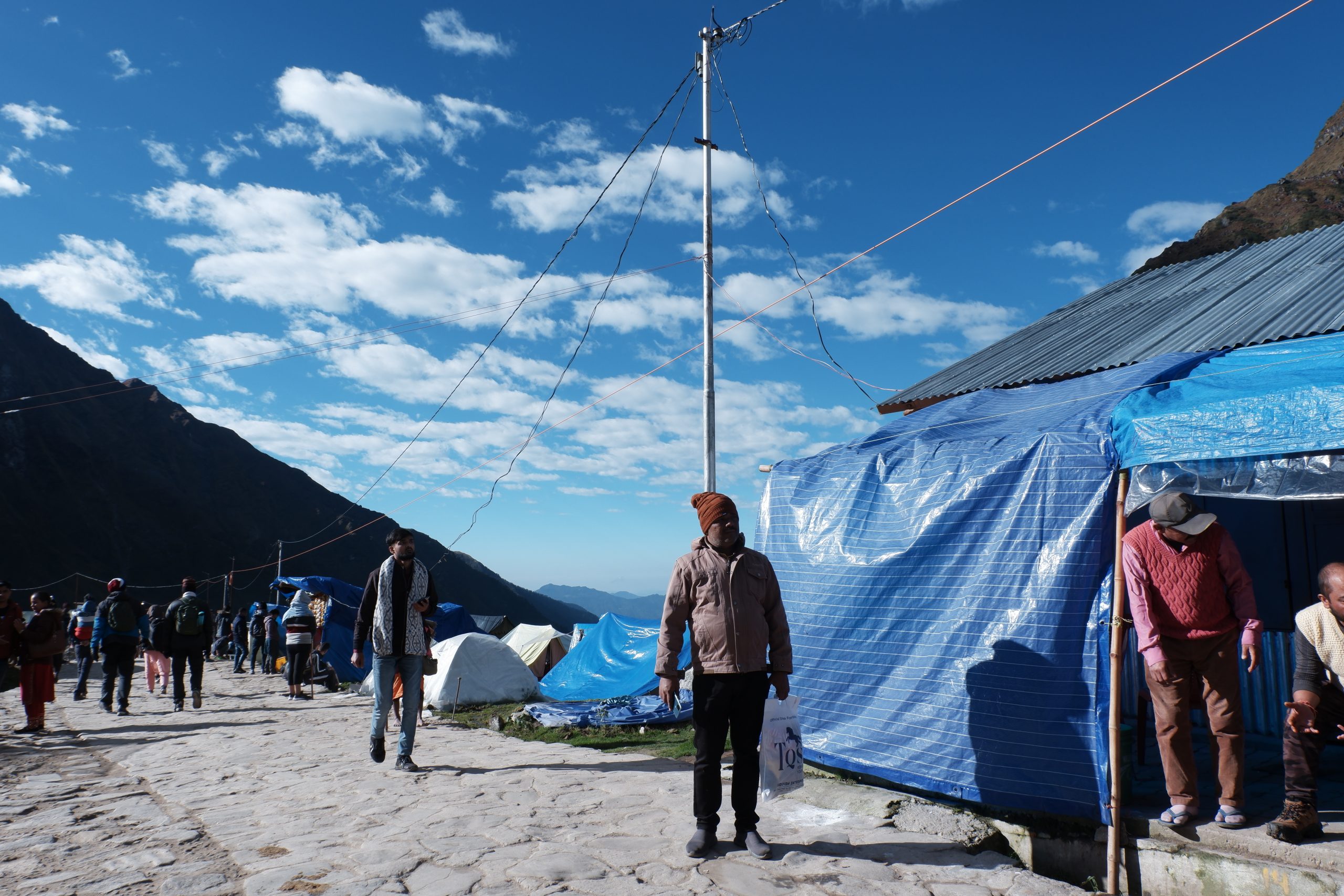 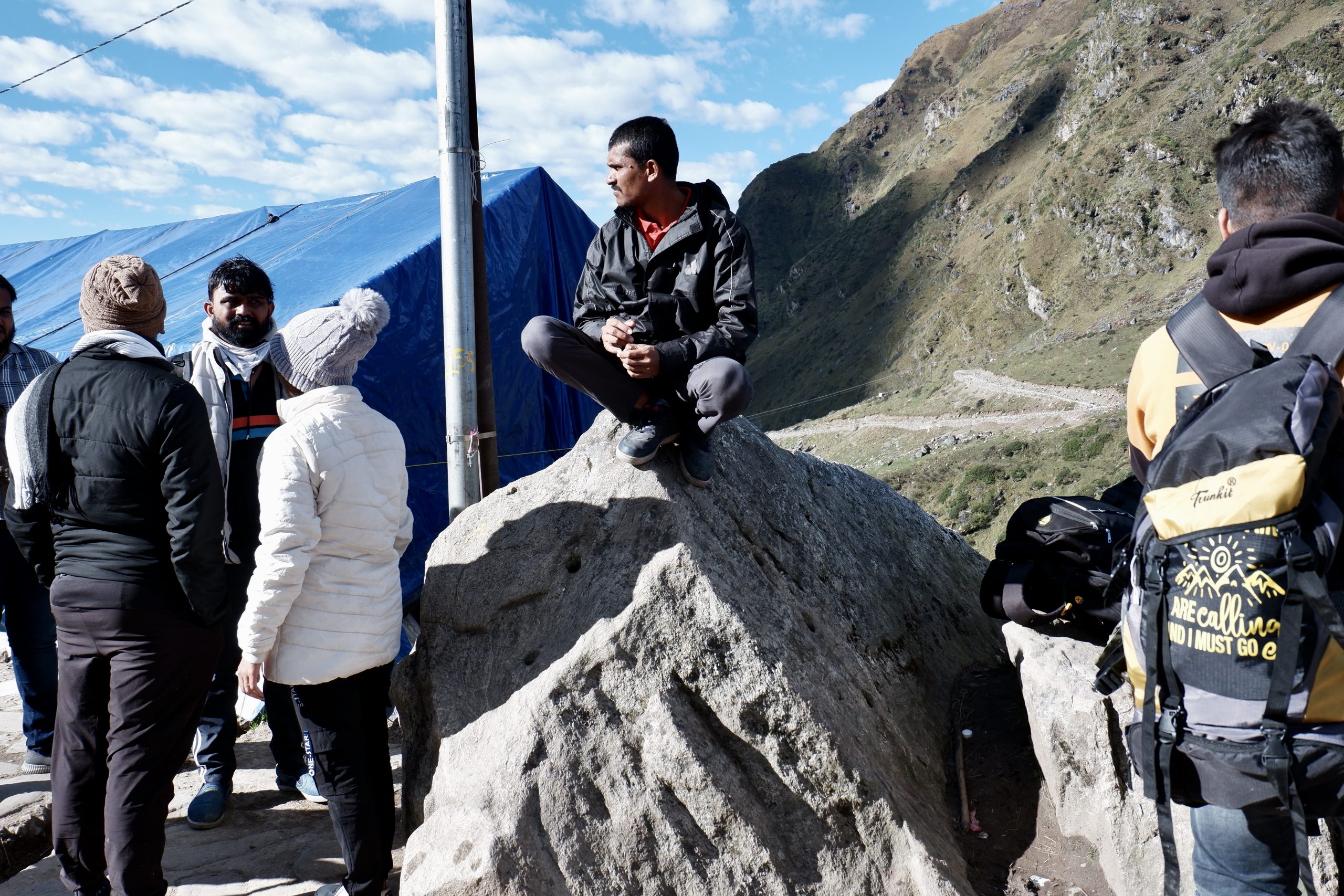 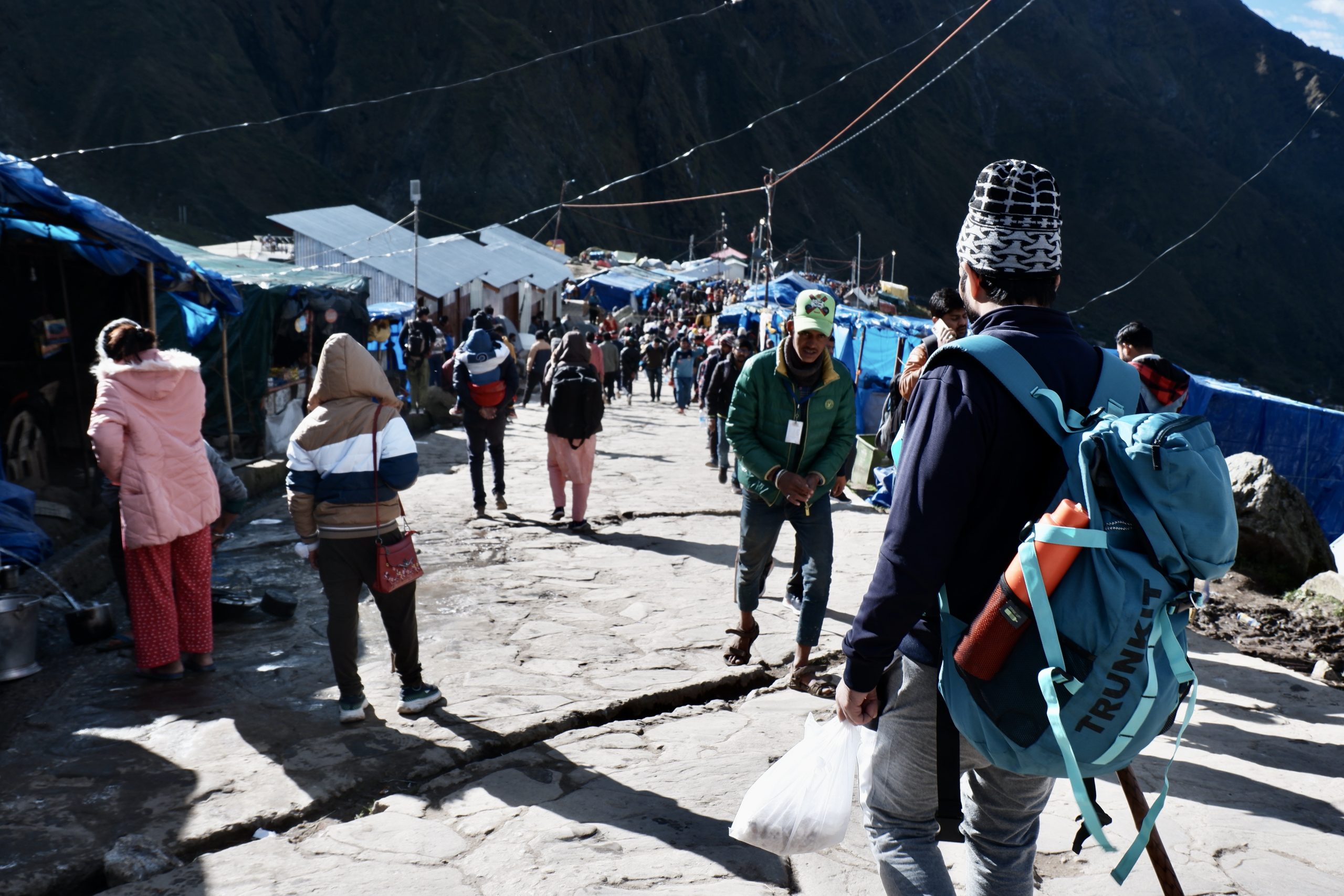 There is another stupid story about Kedarnath and that is a flood disaster. In 2013 it rained like crazy and on 16/17 June various mudslides and debris avalanches went down. They even went around the temple – only this one miraculously stayed well. But the previous route towards Kedarnath was no longer passable, so an alternative was built on the other side of the river. Here you can see where the old route was: 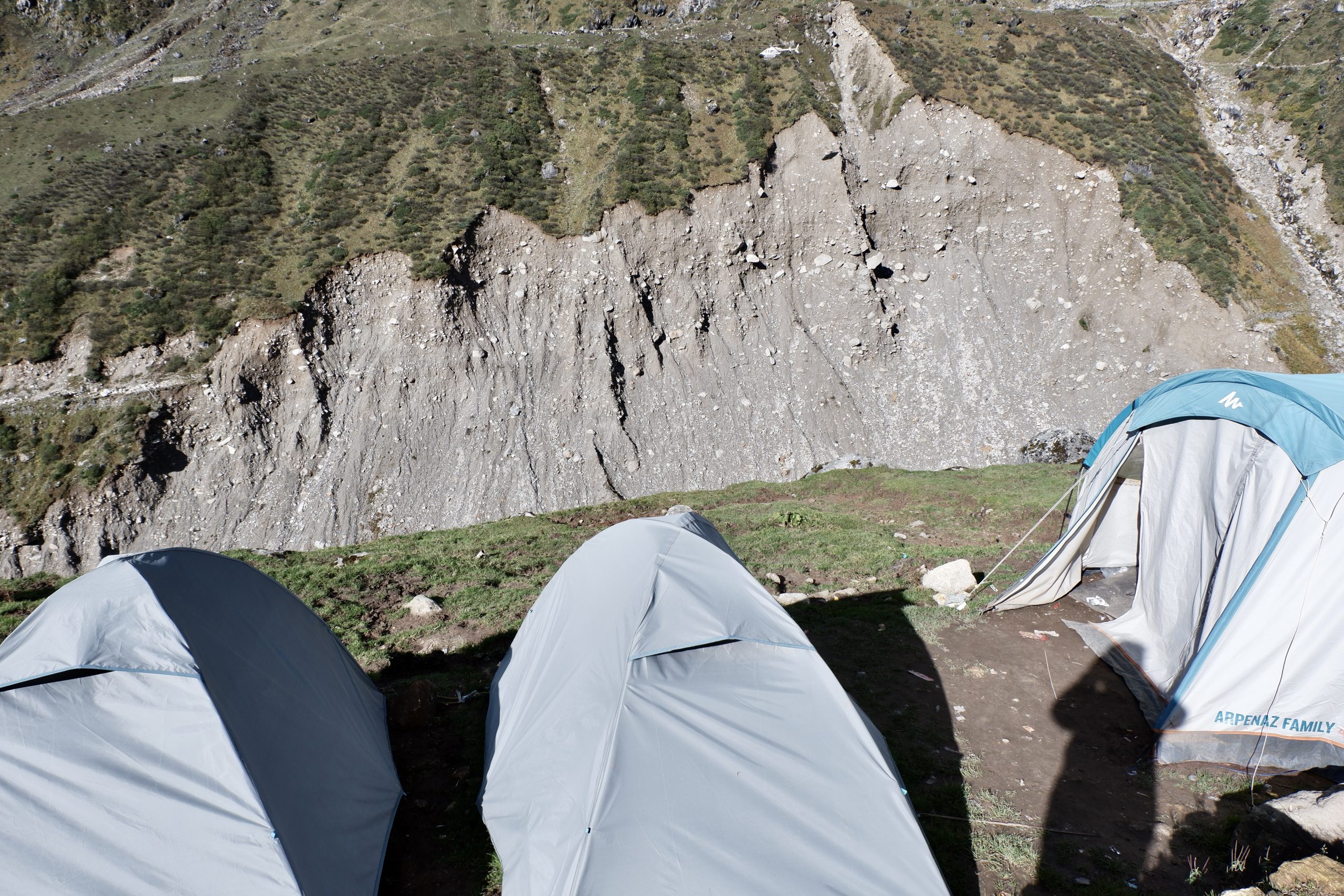 For the downhill Binodh wanted horse. He didn’t want to be so limp, he wanted to be a bit faster and then we should be as fast as possible at the bottom and make distance to escape the crowds. He didn’t like them very much either. So we rode. 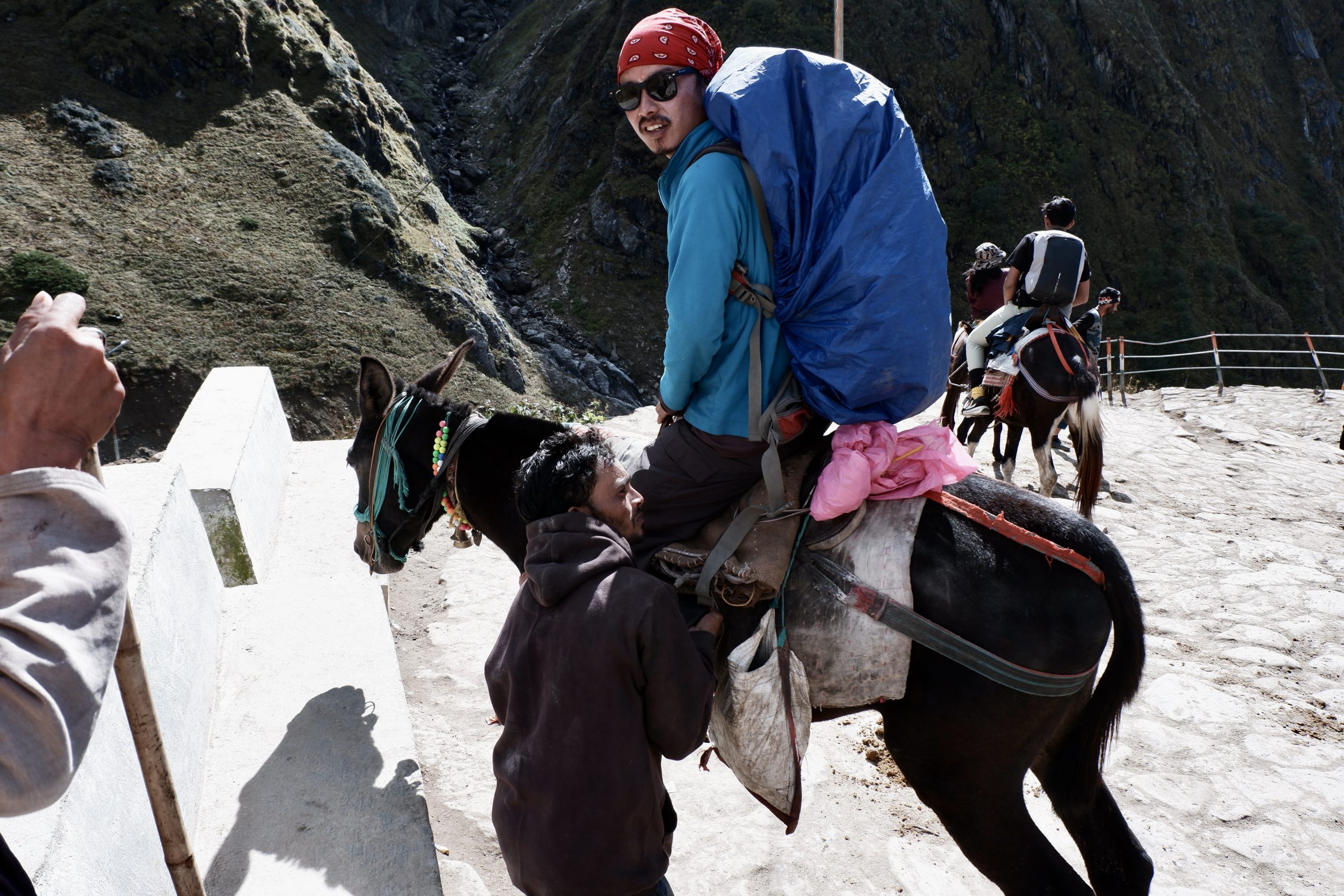 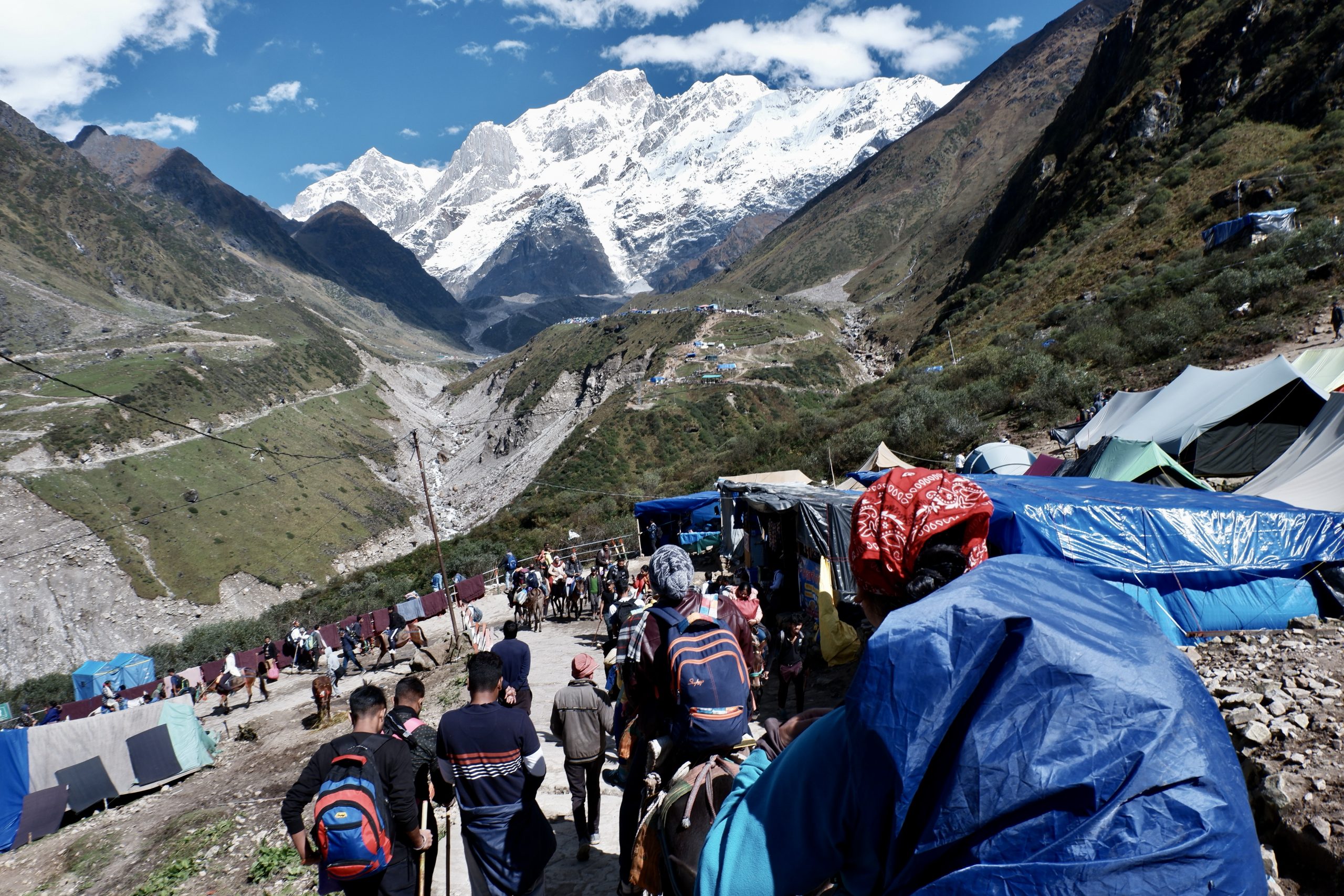 Everything continued to hurt me except the altitude headache, which was fading. It was getting hotter, we hurried to the taxis (it was still full, but no queue), we hurried to the motorbike and sped away, towards Rishikesh. And somewhere along the way we found accommodation. It should be noted that we had already targeted one before, but they didn’t want me. As a foreigner, you always have to fill out a C-form and if the accommodation is caught accommodating foreigners without a C-form, then the shit hits the fan. And they didn’t have a C-form ready.

Did anything happen in the last few kilometres? You can read about it in the next blog post!