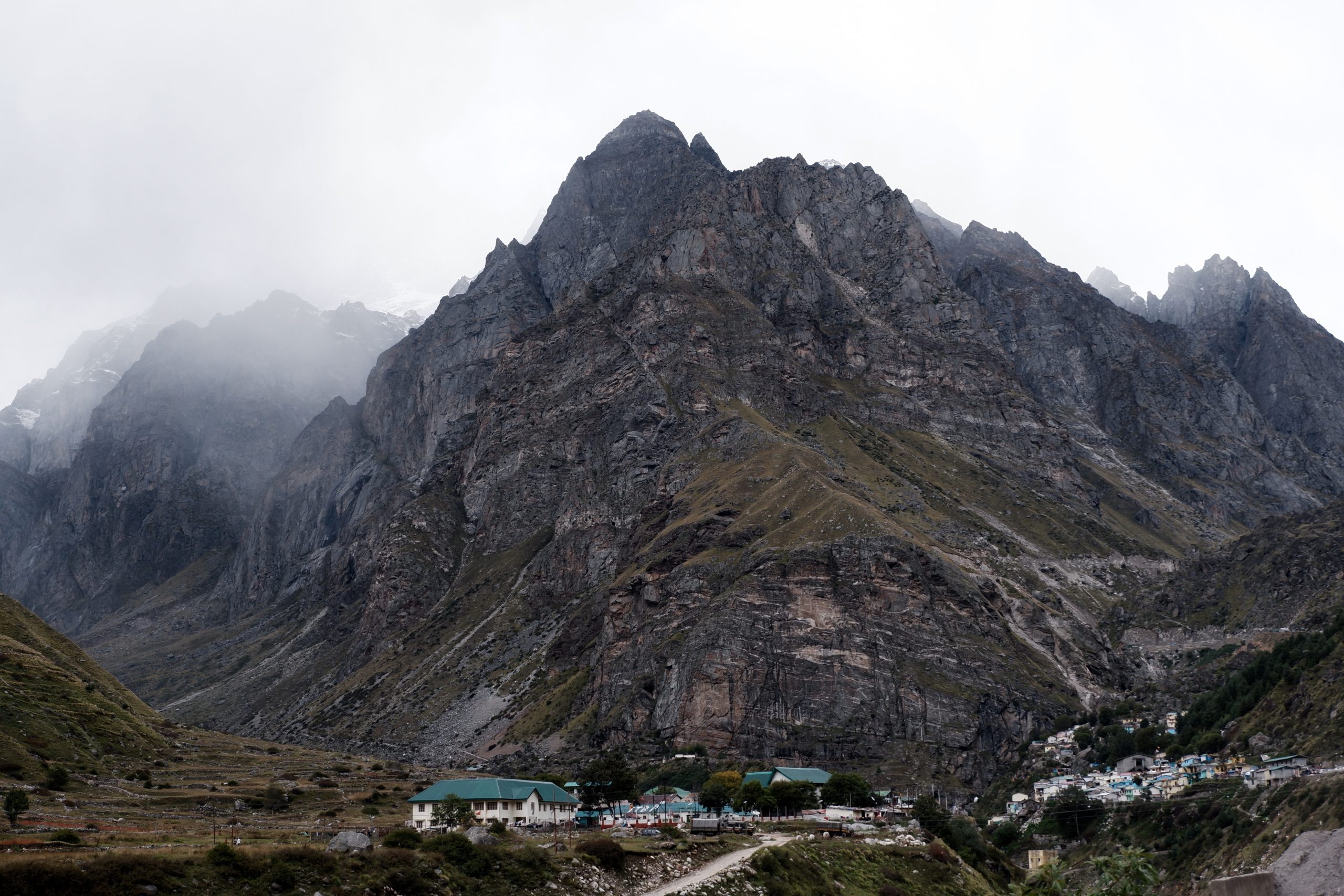 As you can see, the sky has closed in again. From Badrinath it is less than 30 km to the Tibetan border, so it is a restricted area for travellers. But you can drive another 3 km, there is the village of Mana as the last place to visit, and it has significance and sightseeing to offer. 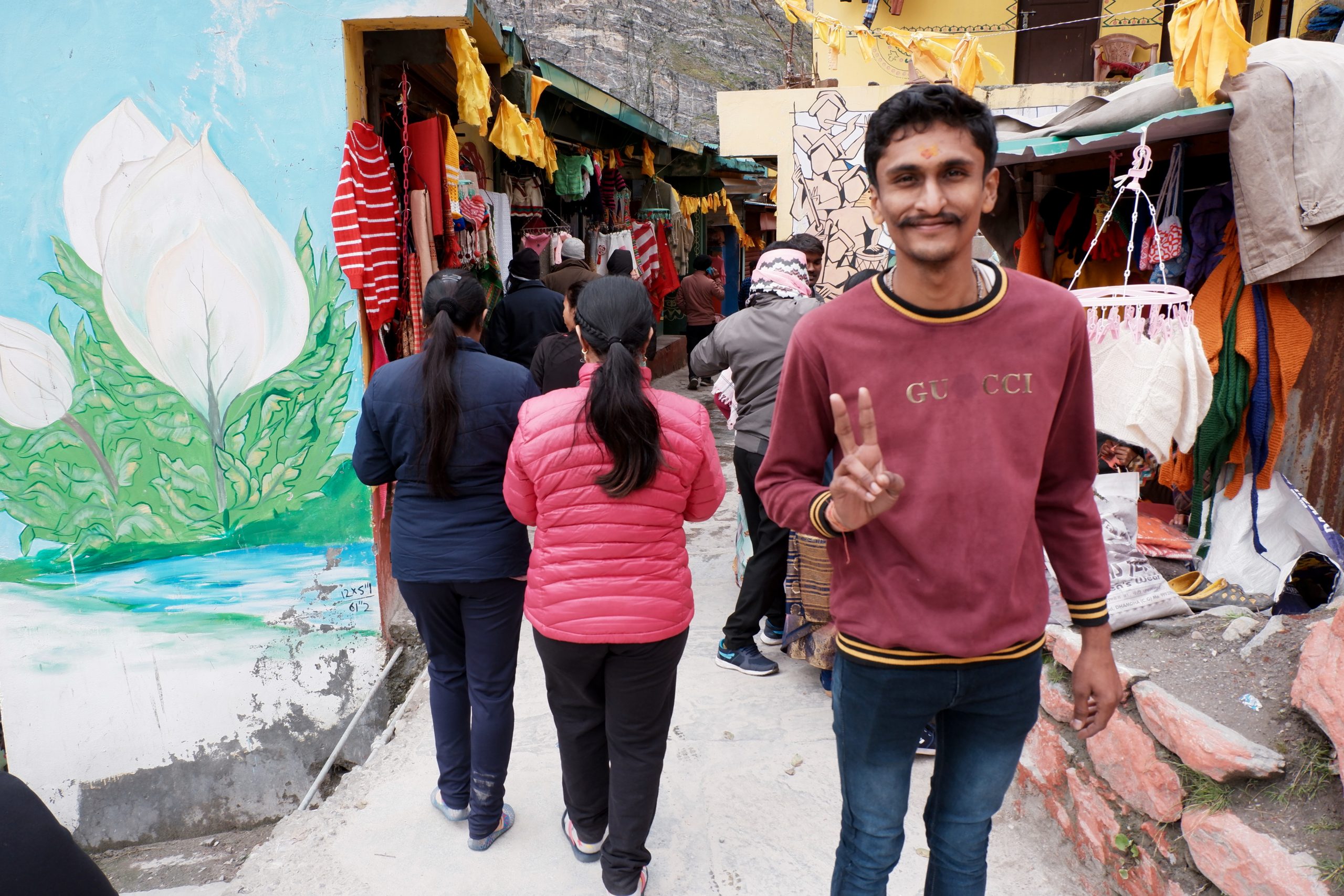 Mana is at an altitude of 3,200 m and the inhabitants move to lower regions in winter because it is too uncomfortable for them up there. There are many murals and the village is very nicely decorated. There were many Indian visitors there with us – not only because of the location. 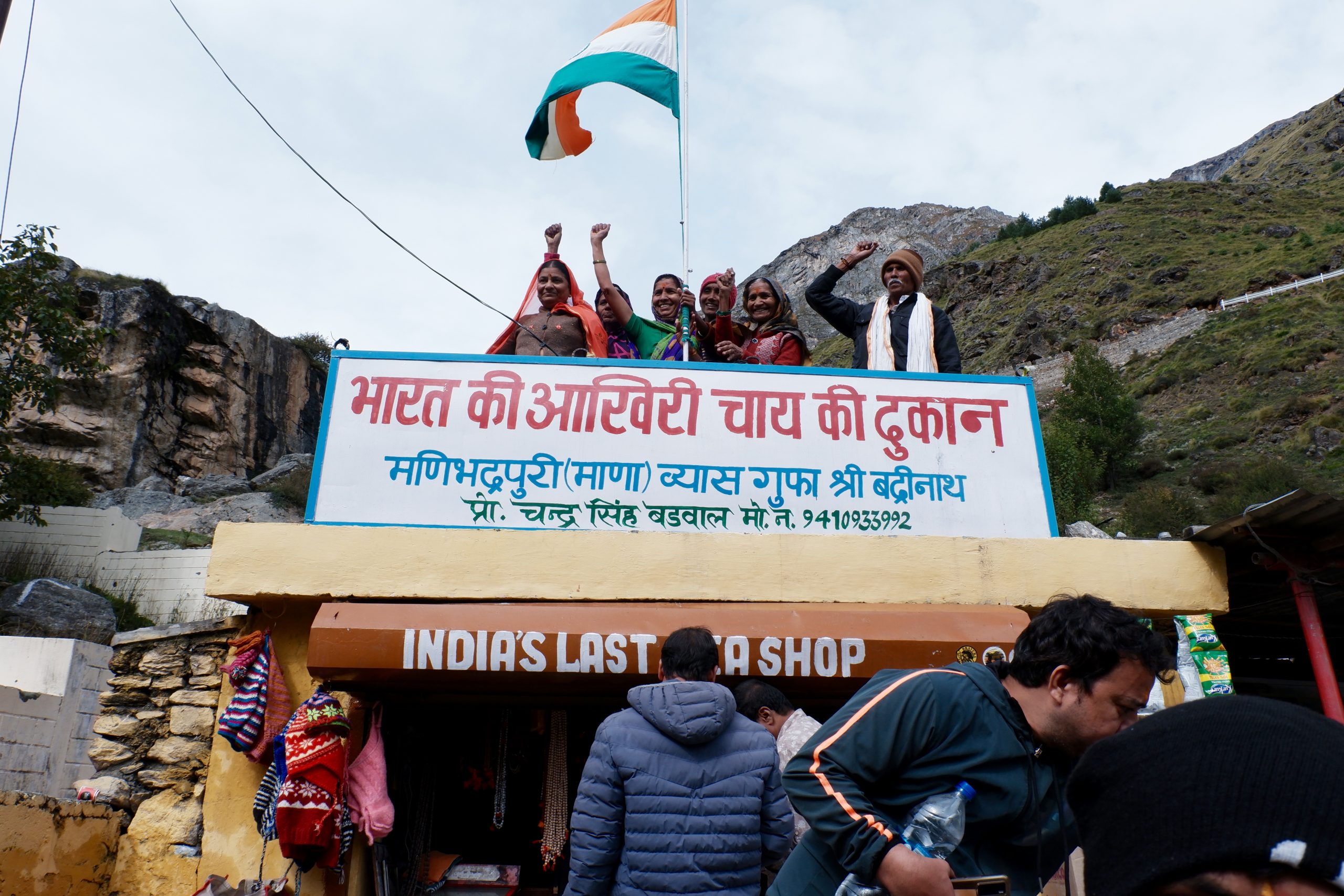 In another post, we talked about the Pandavas, who created the Shiva temples in Garhwal. There are many stories about them in the Mahabharata, the great epic of India. One of them is that of their common wife Draupadi. The 5 brothers all had single wives, but one common one and it came to be like that: Draupadi was not an ordinary born woman but sprung from fire. After much toing and froing regarding a suitable husband, she then agreed to marry Arjuna, one of the 5 Pandava brothers. When he came home with her and wanted to introduce her to his mother, she was busy at the cooker and inattentive and to his sentence: “Look who I brought with me” she replied absent-mindedly: “It doesn’t matter, the main thing is that you share with your brothers”. And poof, Draupadi had not one but 5 husbands!

She bore a son to each and when the 5 ran around the Garhwal, she was there. But oh dear, the journey was too tiring and exhausting for her and then in Mana she died. This can be seen here on the mural: 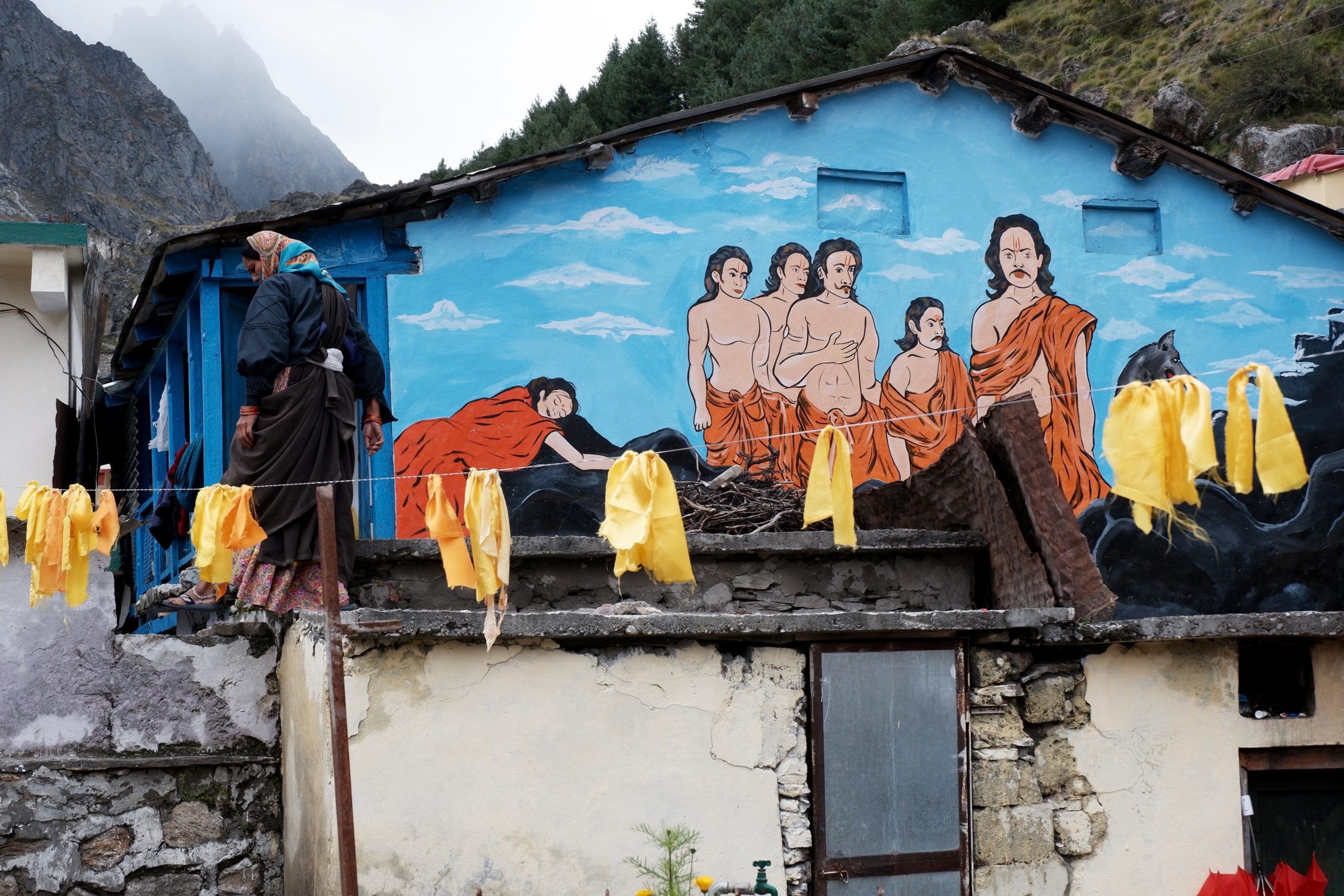 Bhima, one of the Pandavas, also left something here and that is this bridge that connects these special stones: 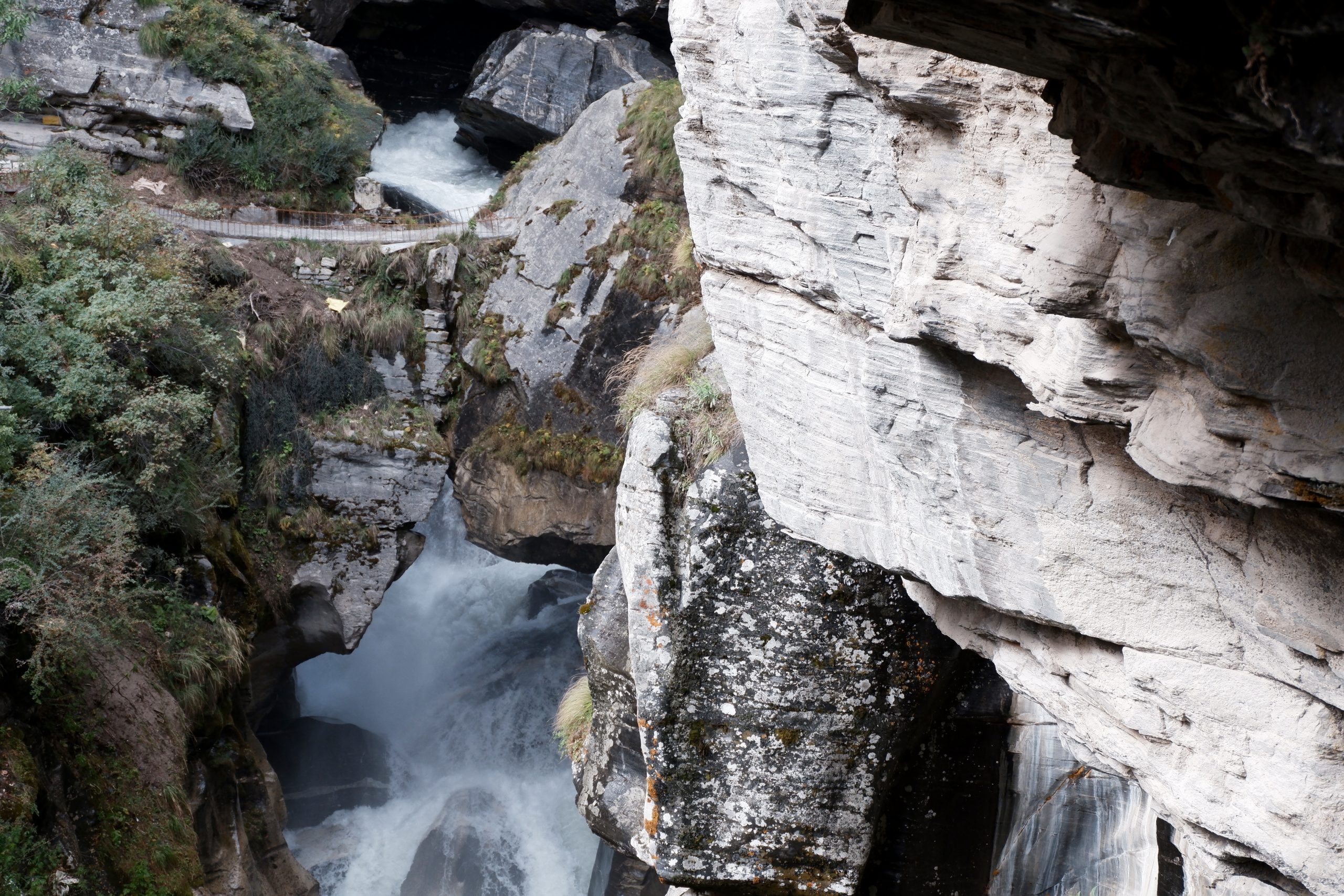 Right next to it is an overhang where a holy man sits and meets believers. Sometimes, however, none are interested in him. 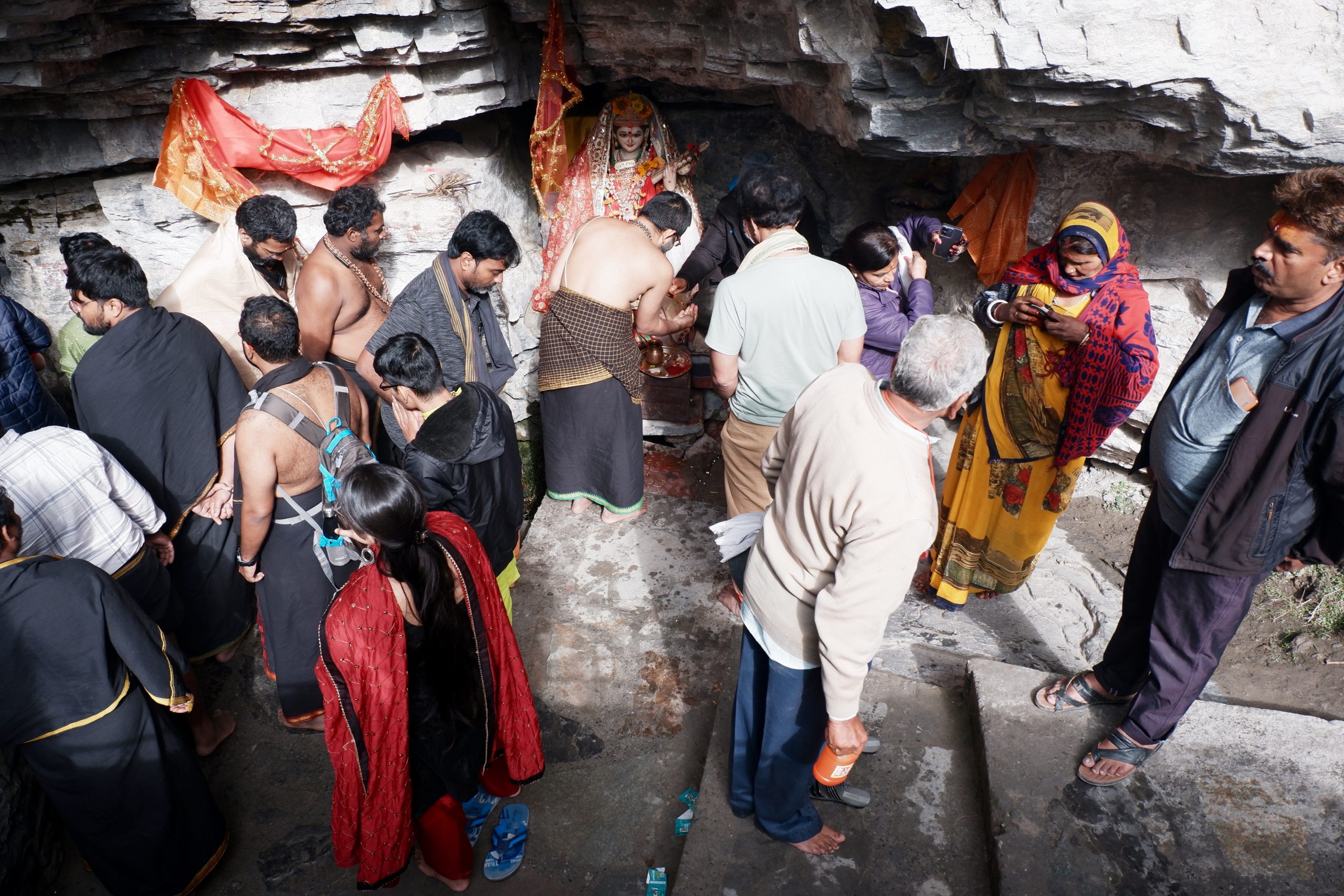 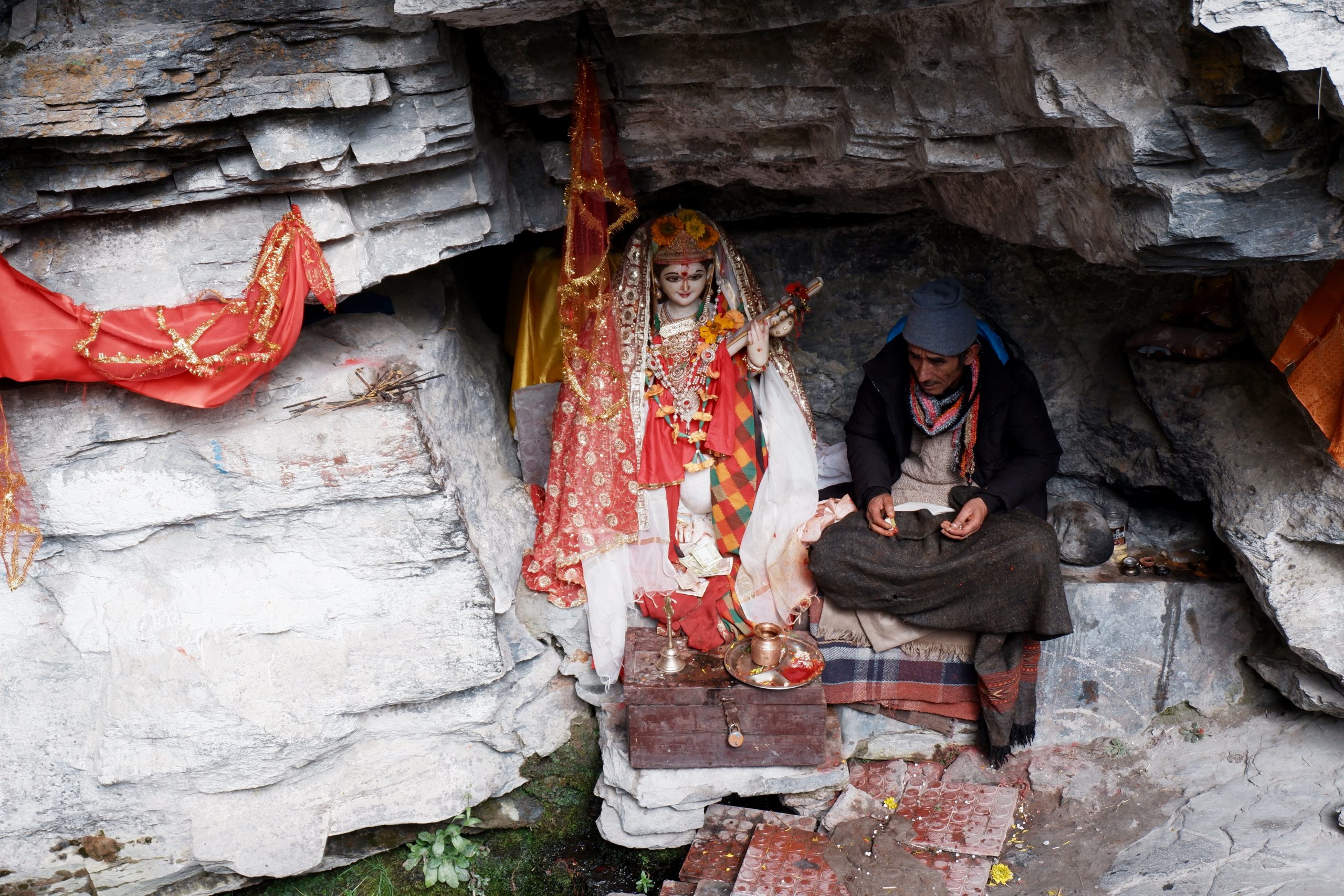 Then there is the story that the Mahabharata was written down here. There was the mythical sage Vyasa, who is said to have dictated the eternally long story to the god Ganesha in one go. That was Ganesha’s condition, that it should happen in one go, and so Vyasa told and told the story, which is considered today to be the longest epic. This is one version of how it came about – as with many Indian stories, there is not just one version. 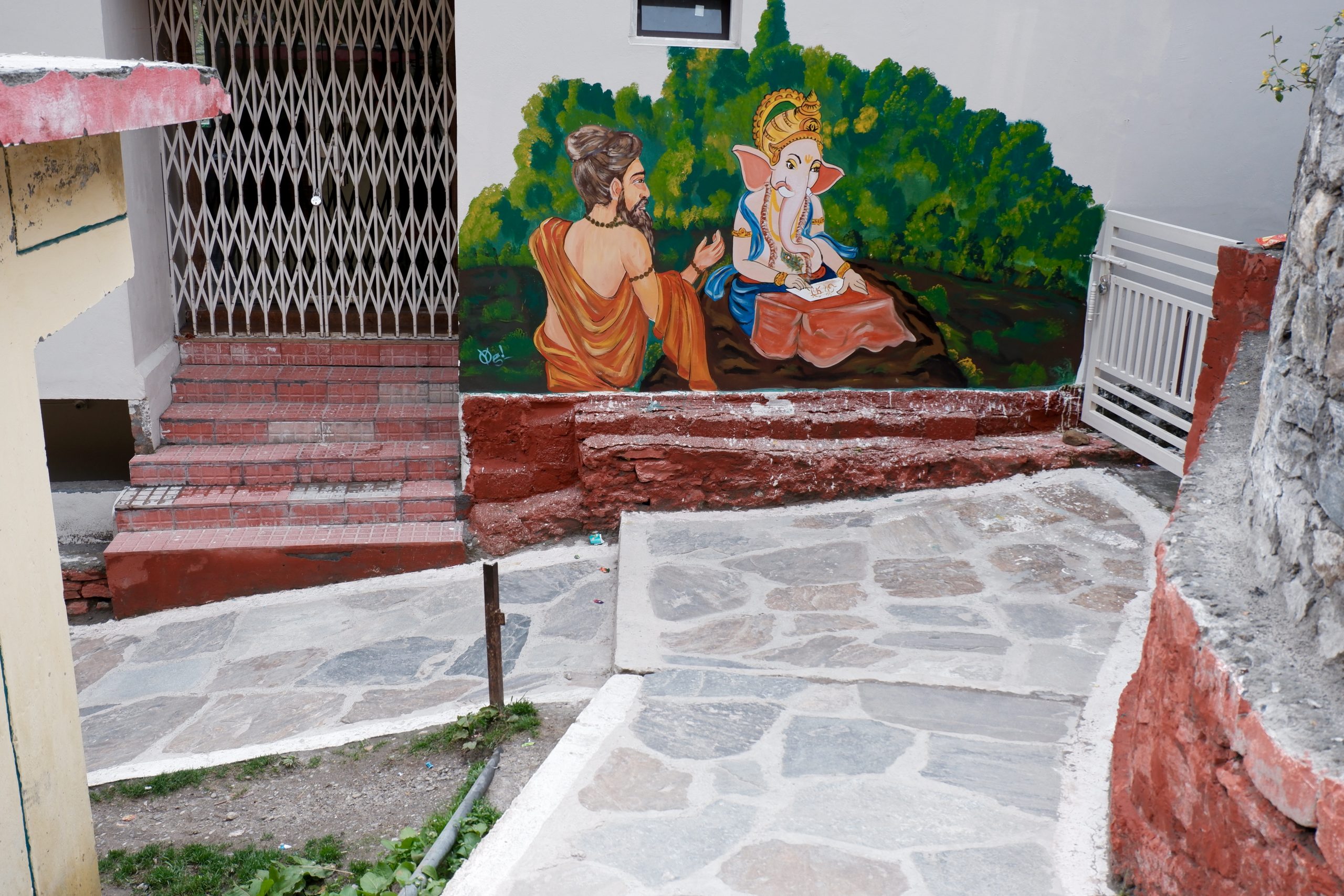 Anyway, I’m a bit confused again and there was also a cave behind this entrance where holy men were celebrating something and you weren’t allowed to take photos and whether that was the one from the Mahabharata origin or something else I don’t remember. 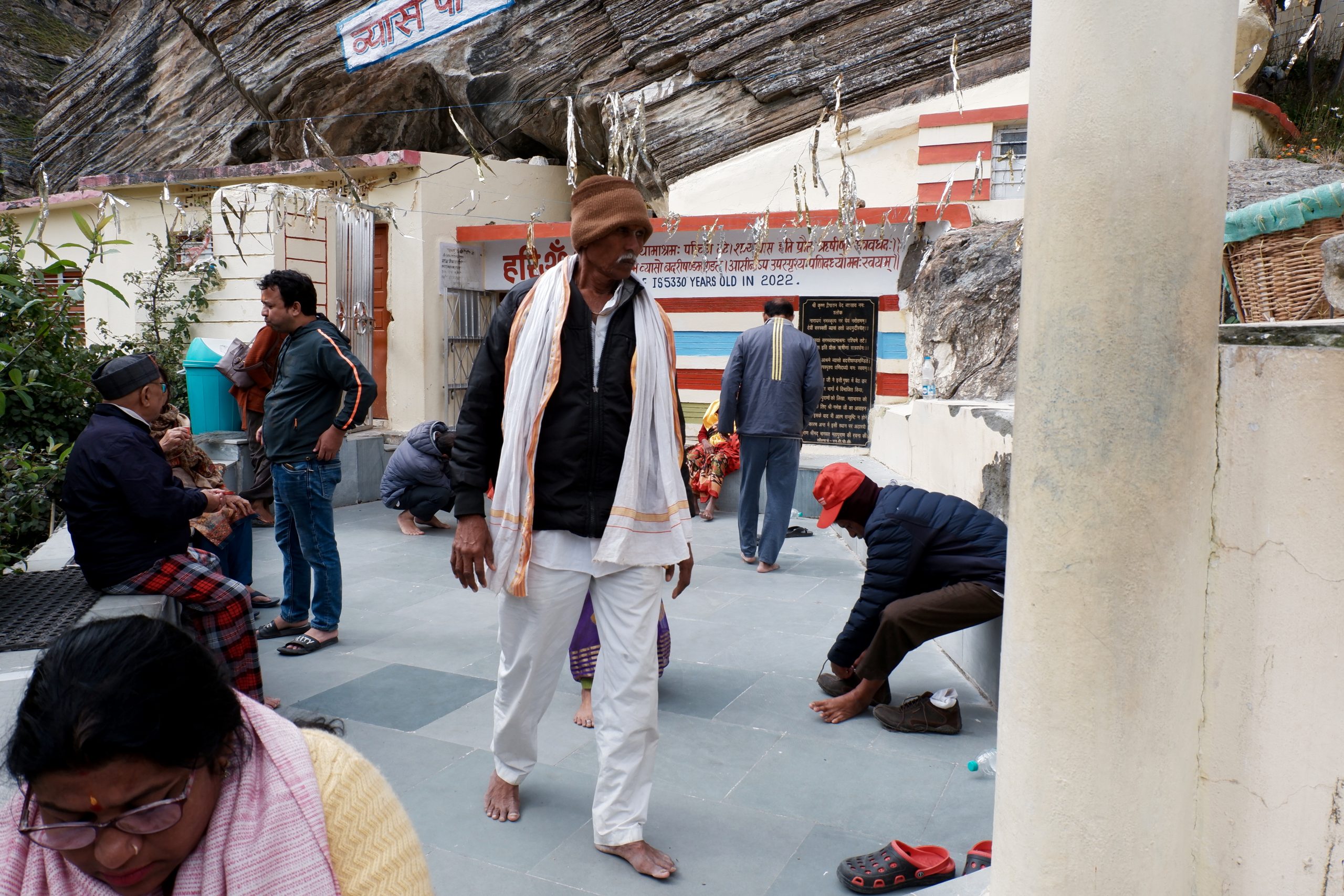 The town of Mana goes uphill and there were a lot of tourists. But not all of them could manage it on foot. 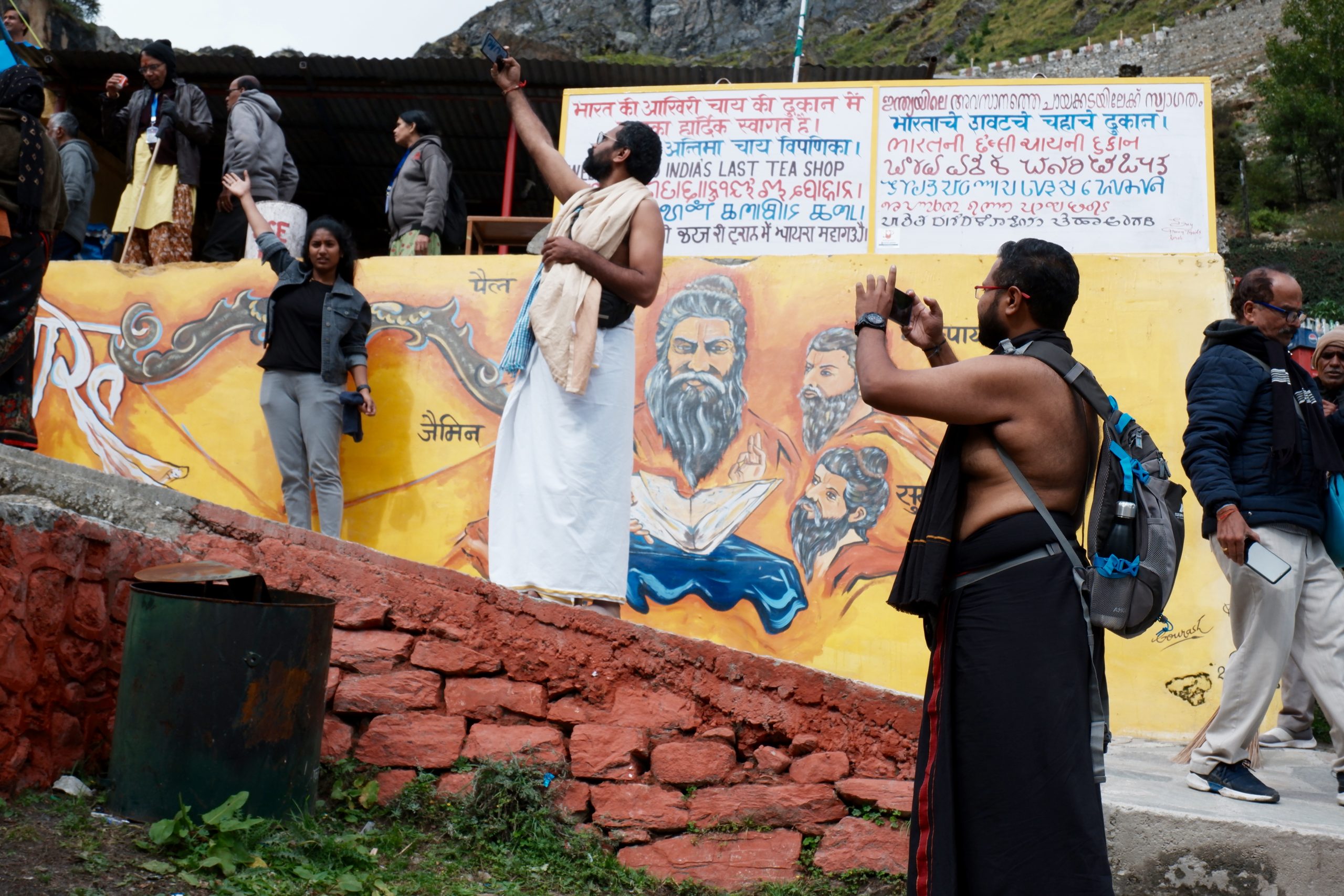 In Tungnath there were already these stretchers where 4 people carried one person. Here there was also the 1:1 model (not only here, but also elsewhere), i.e. one person carries another on a converted seat. Sometimes these are frail old people, but often also quite chubby-looking Indians. I find that difficult to watch. How can one impose oneself on another person like that? Even if he has hardly any other means of earning a living. 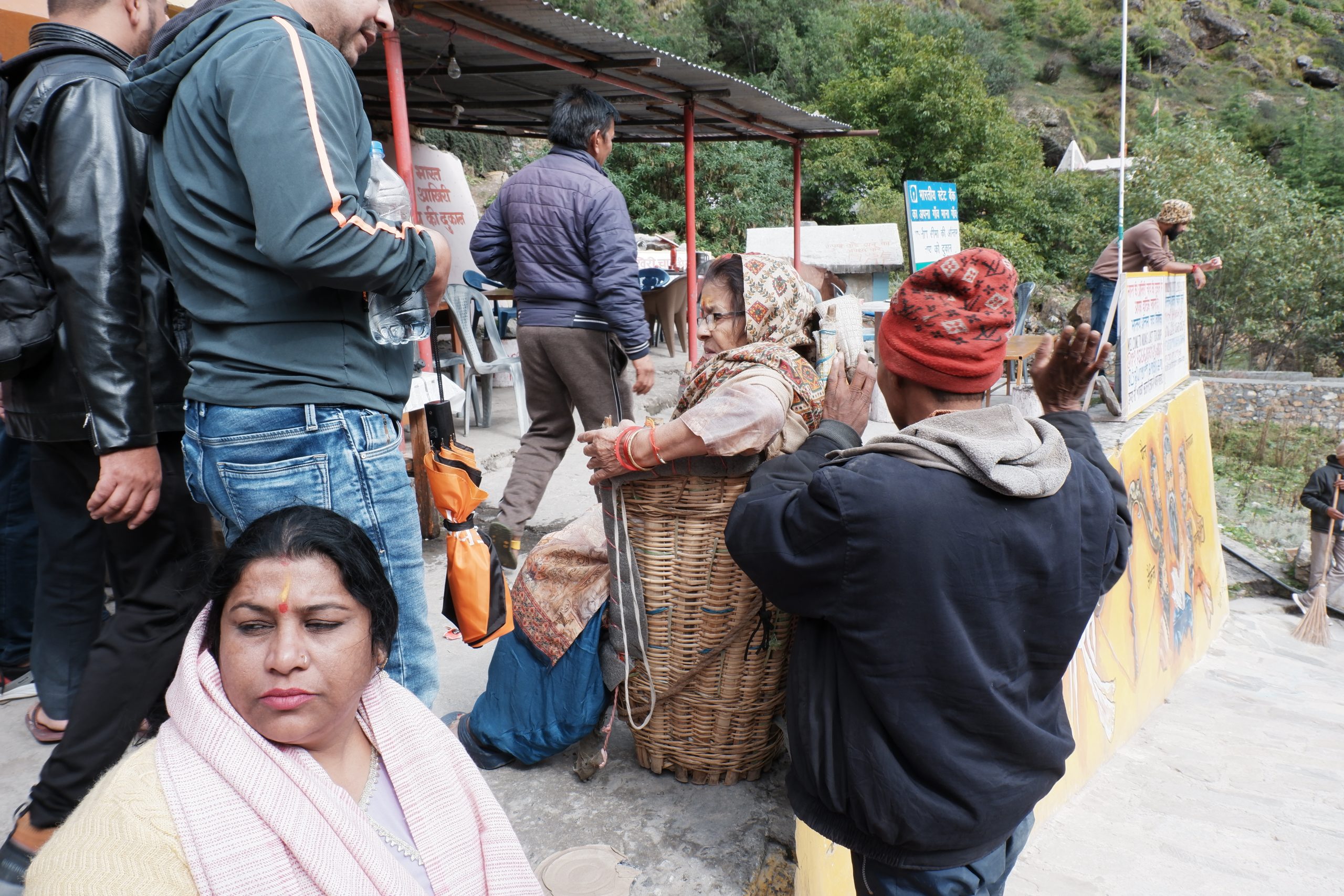 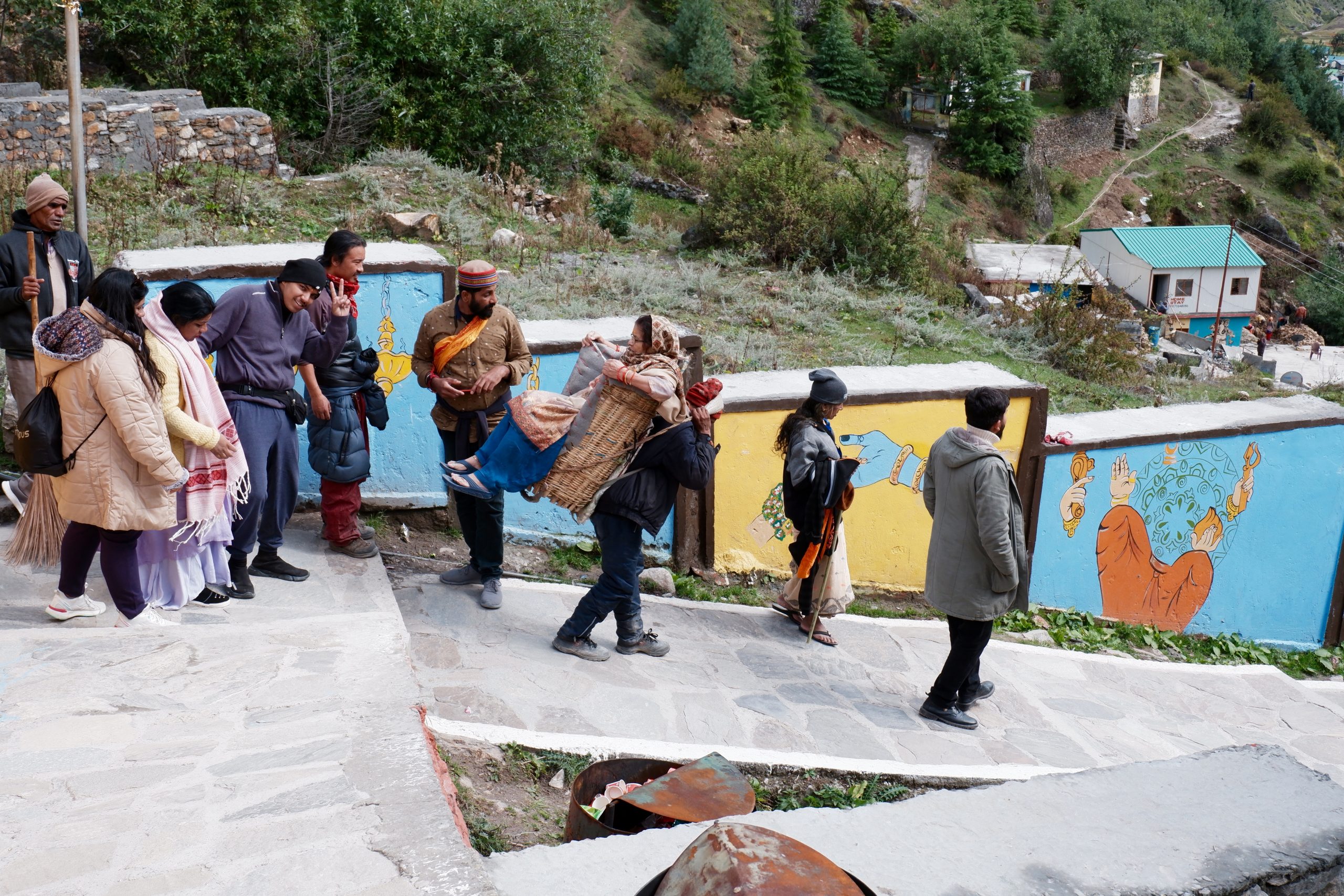 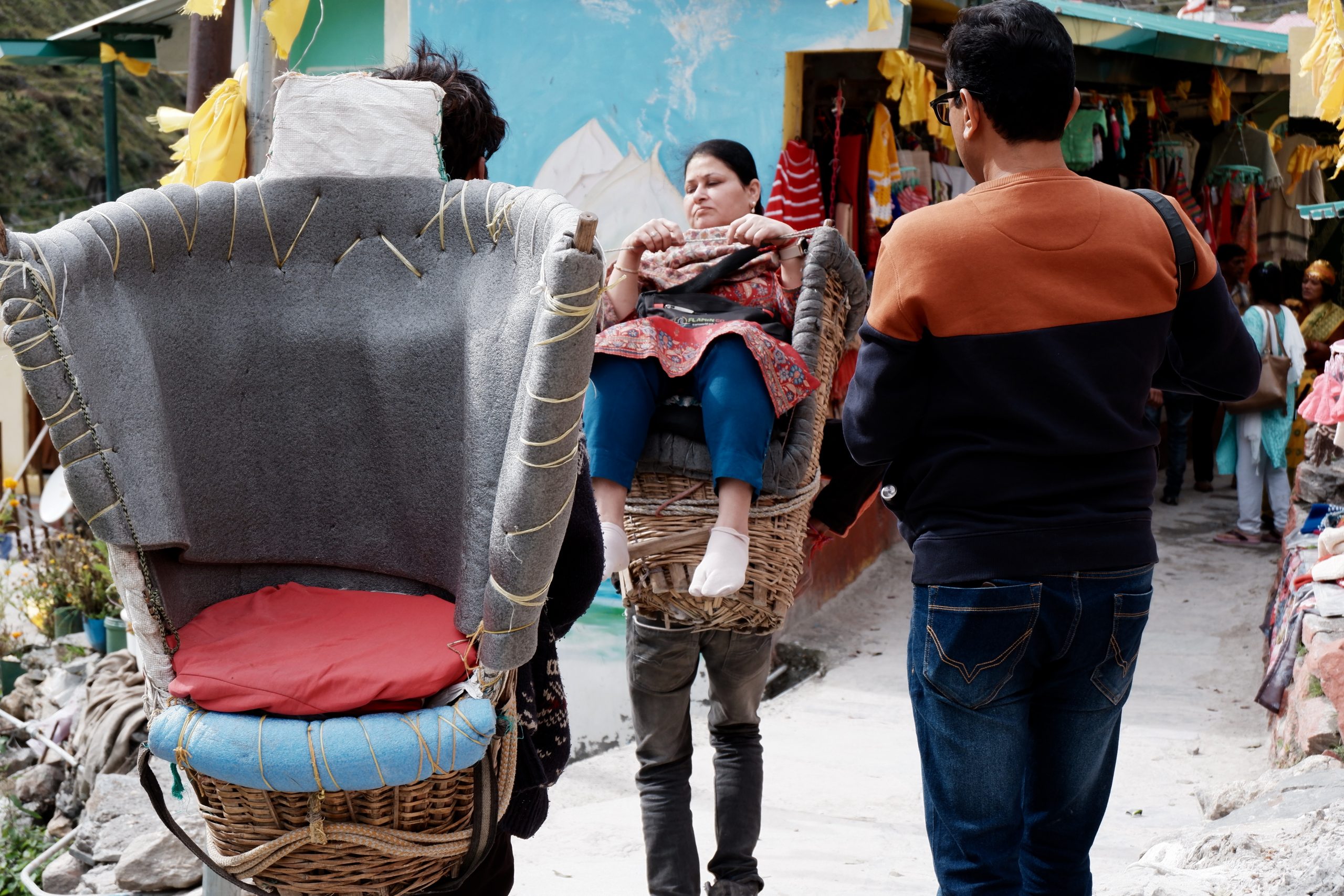 And then we drove back a bit to Govindghat to start another venture from there. What? That’s in the next blog post!