The Dungans – history, mosque and dinner

Quite diverse people live in and near Karakol. One notable community is that of the Dungans. I visited the mosque, museum and a family for dinner. 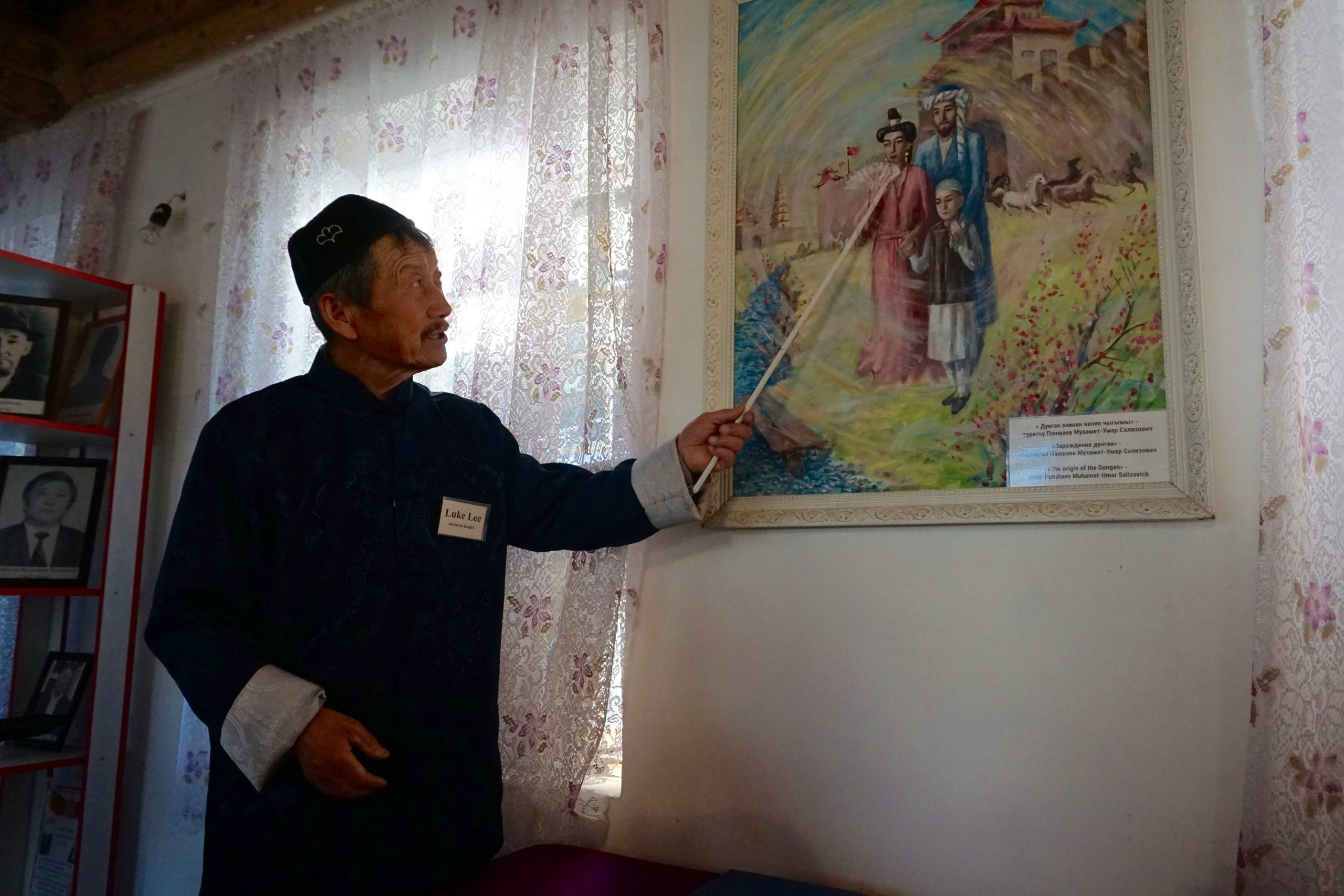 In the museum, Lucky Lee told their story. He spoke a few words of German, but his stories were translated by Shirin anyway. He told that at that time there were Muslims who came to China with about 2,000 men and told them about their teachings. This pleased the ruler of the time and he allowed them each to take a Chinese woman as a wife. They produced children and that then became the Dungan people. Well depicted in this picture. 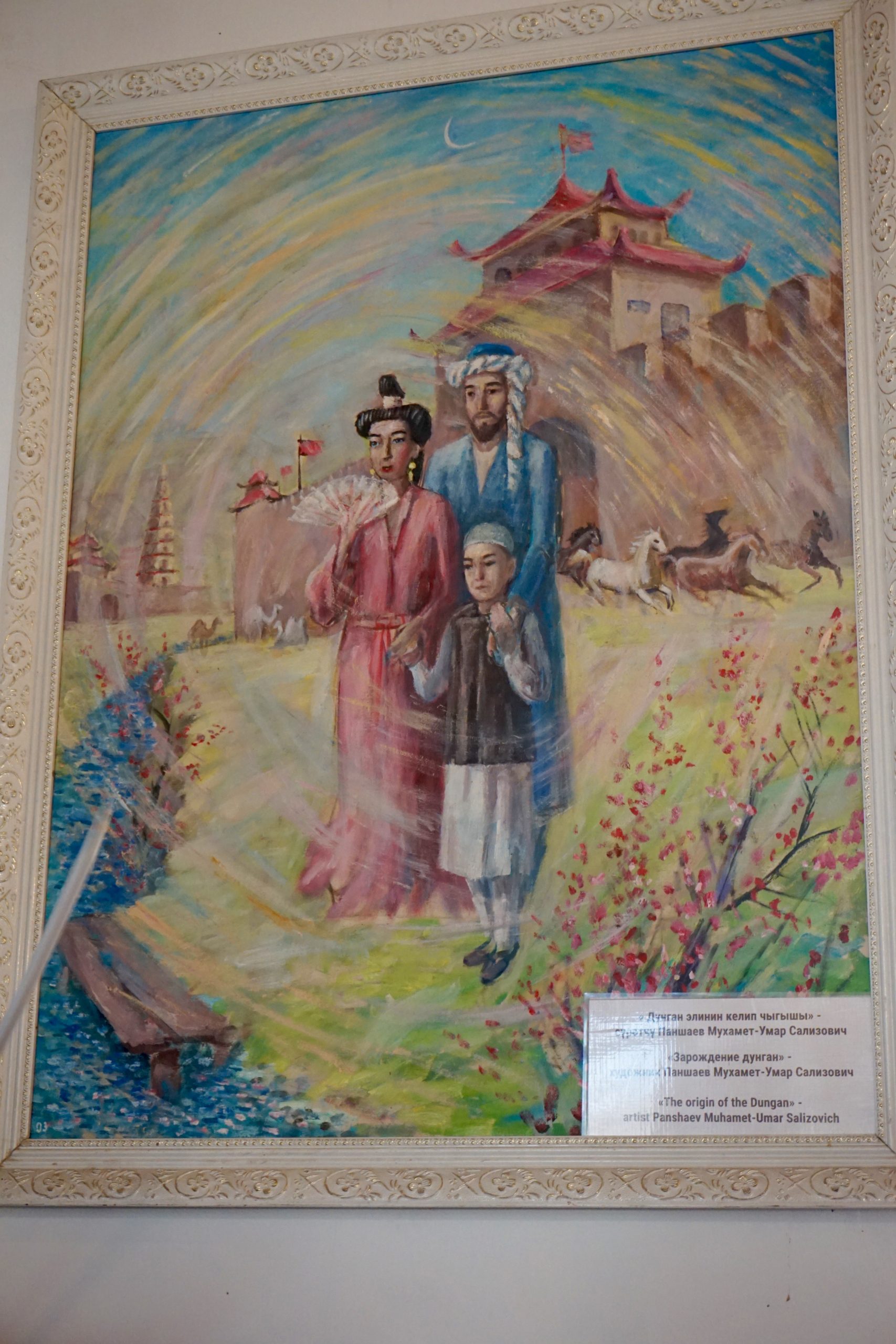 At first they lived there quietly and peacefully, but from the beginning of the 19th century there was stress in China with the Muslim fellow citizens. There were several different Chinese who believed in Islam – they were grouped together under the term “Hui”. As a distinction from the dominant Han Chinese.

I’ll just quote Wikipedia: “The (Dungan) uprisings were triggered by the ever-present tensions with the Han Chinese and specifically an attack by Taiping rebels on Shaanxi, including Xi’an, in April 1862. Although the Taiping quickly withdrew, imperial officials allowed the formation of local self-defence organisations (tuanlian), a common practice at the time, which militarised the province. Promptly, Han burned down a Muslim town, whereupon a Dungan leader assassinated the imperial commissioner in charge and feuds broke out along the Wei River. Proclamations that all Muslims should be killed without trial did the rest and Muslims rebelled.”

Many then fled to the Central Asian areas, especially Kyrgyzstan and Kazakhstan. These were then given the name “Dungans”. In Karakol, they built a mosque that looks very different from the usual mosques. 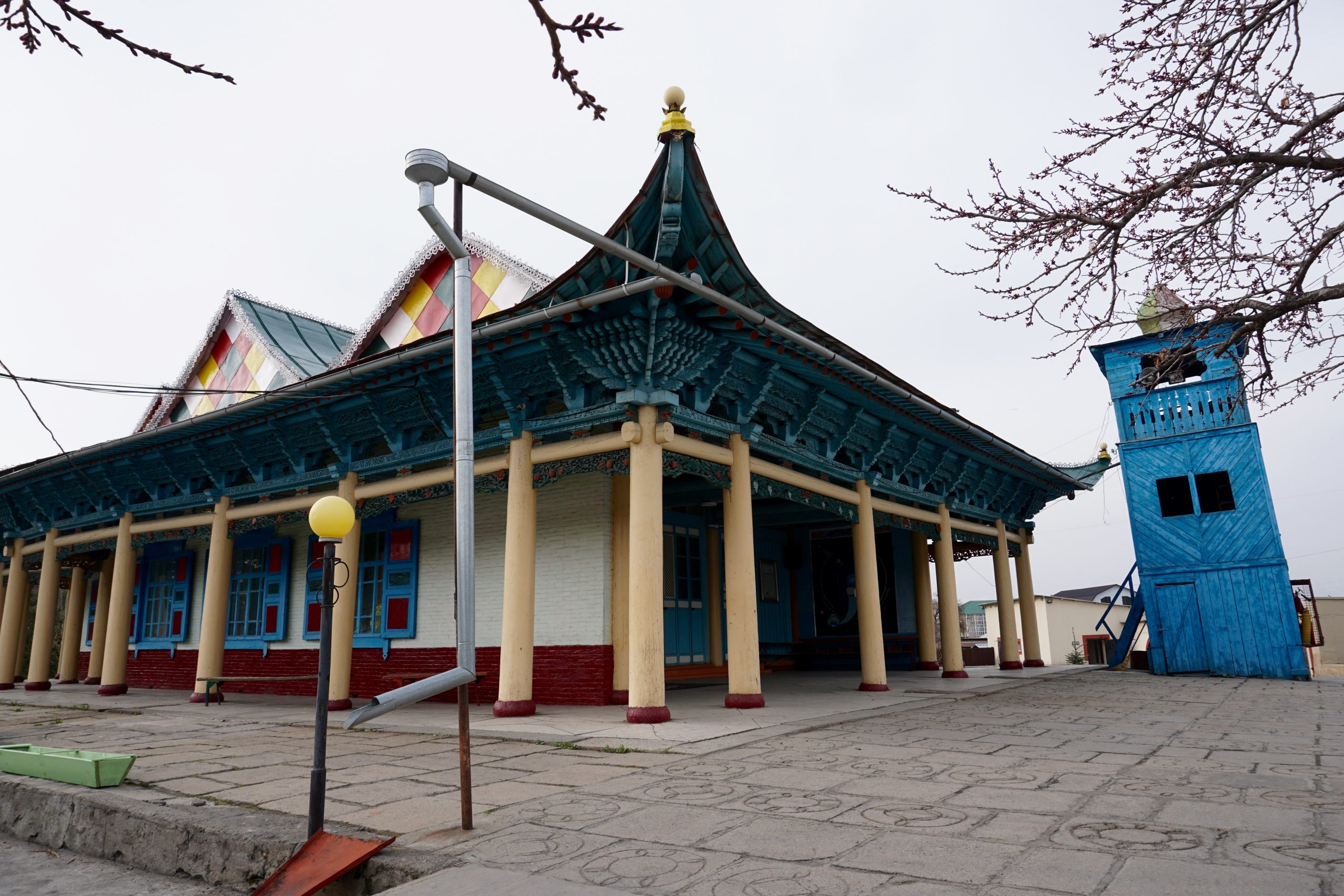 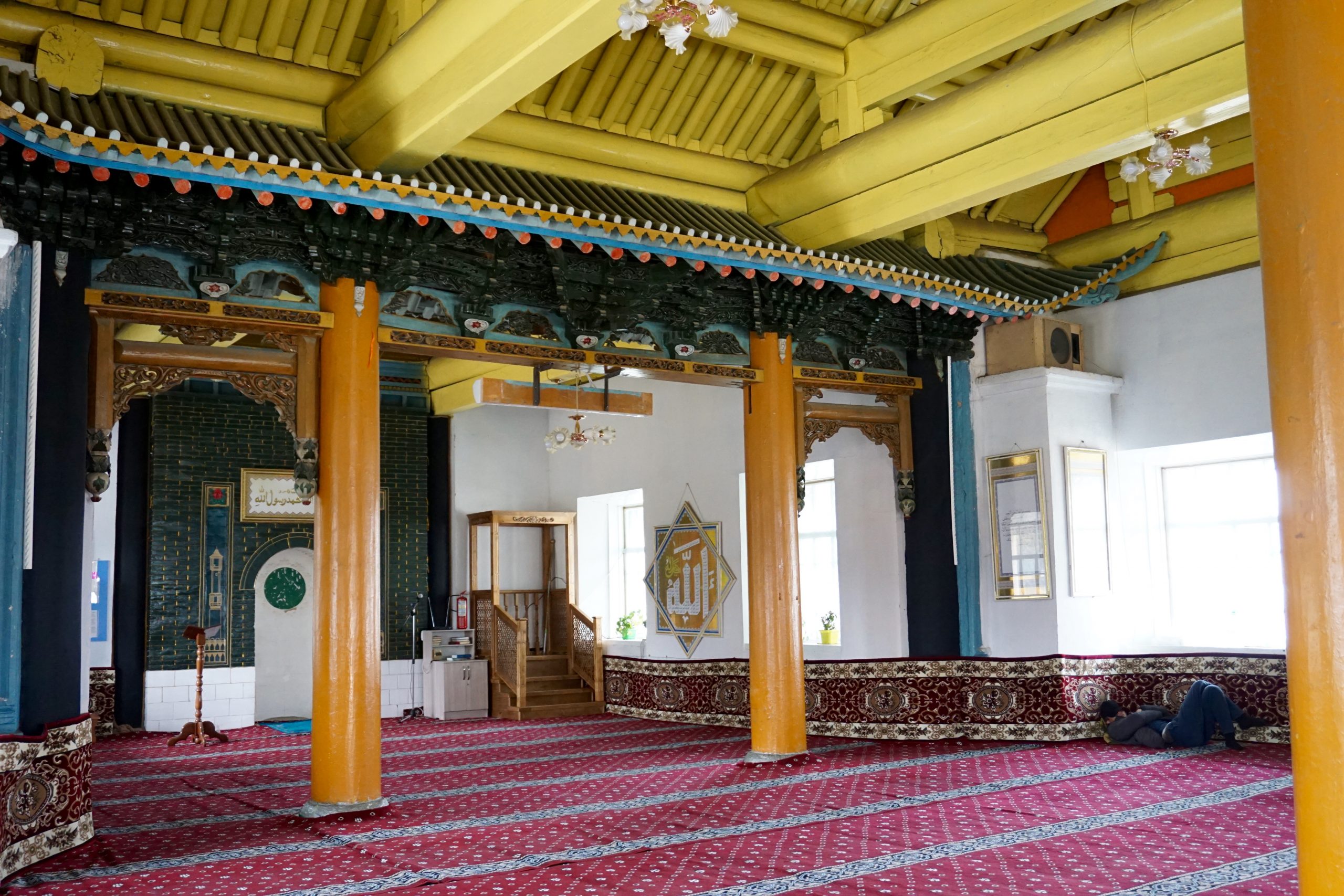 The mosque is made entirely of wood and not a single nail is said to have been used in its construction. It was finished in 1910. 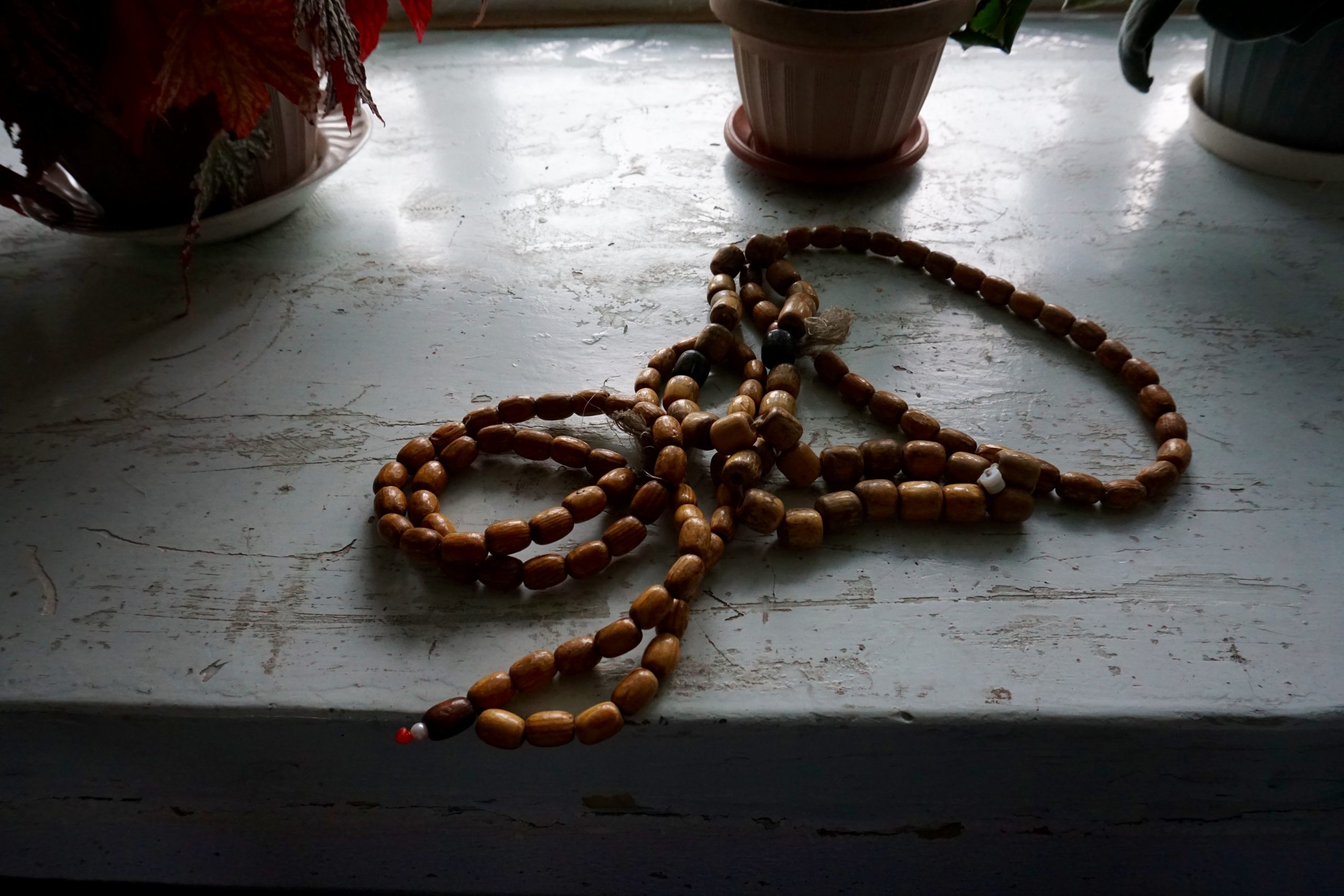 The Islam they practise is a somewhat unique form, based on Sufism. They also have their own language, based on Chinese. They have been using the Cyrillic alphabet since 1953.

So after Lucky Lee told the story, we were taken to a family. We were a French couple. a woman with a 7-year-old niece from Stuttgart, me and our interpreter and organiser Shirin. Before you sit down to eat, you have to wash your hands. 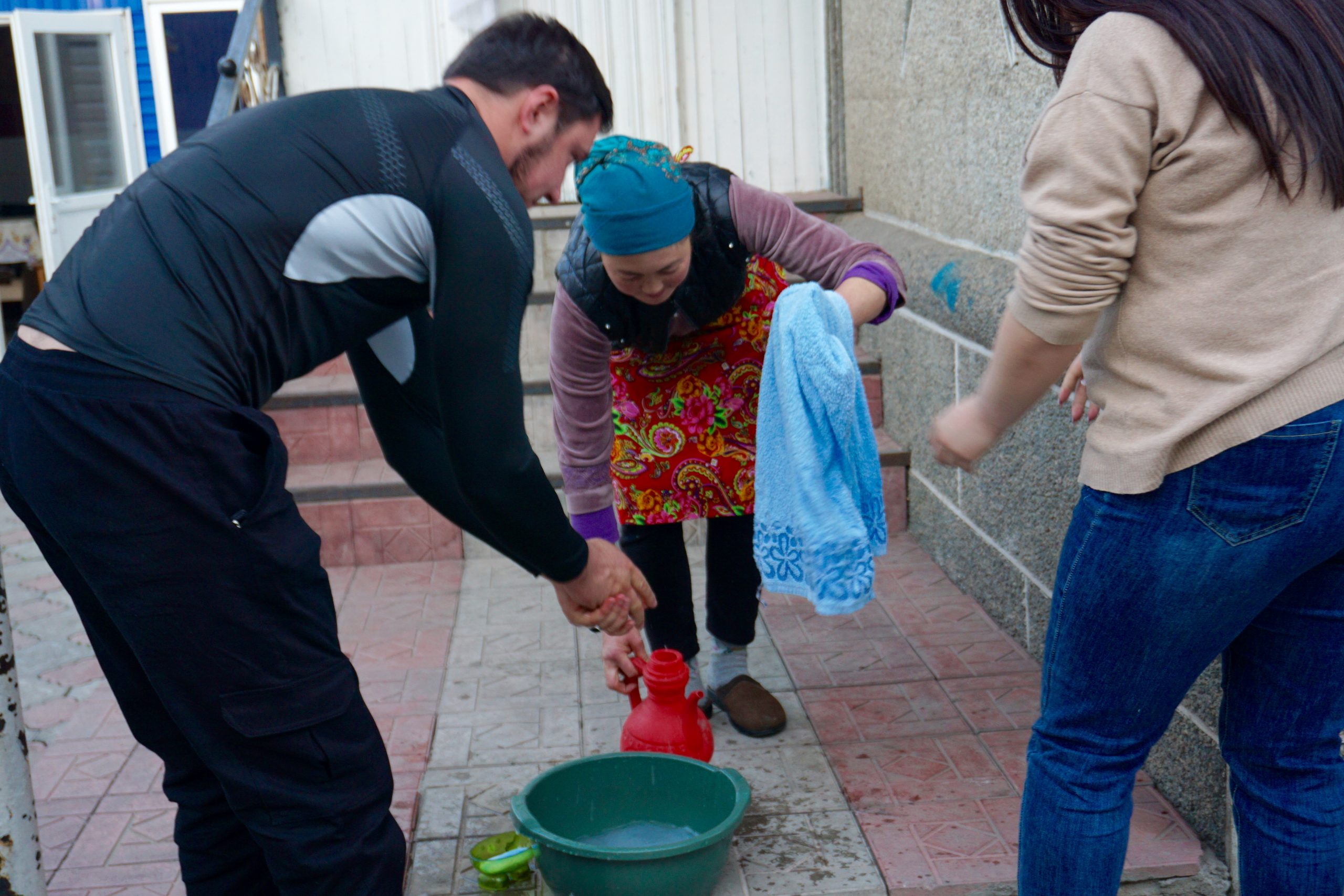 They are Muslims and are therefore doing Ramadan, but they have already prepared the food for us. Just a little later than usual. 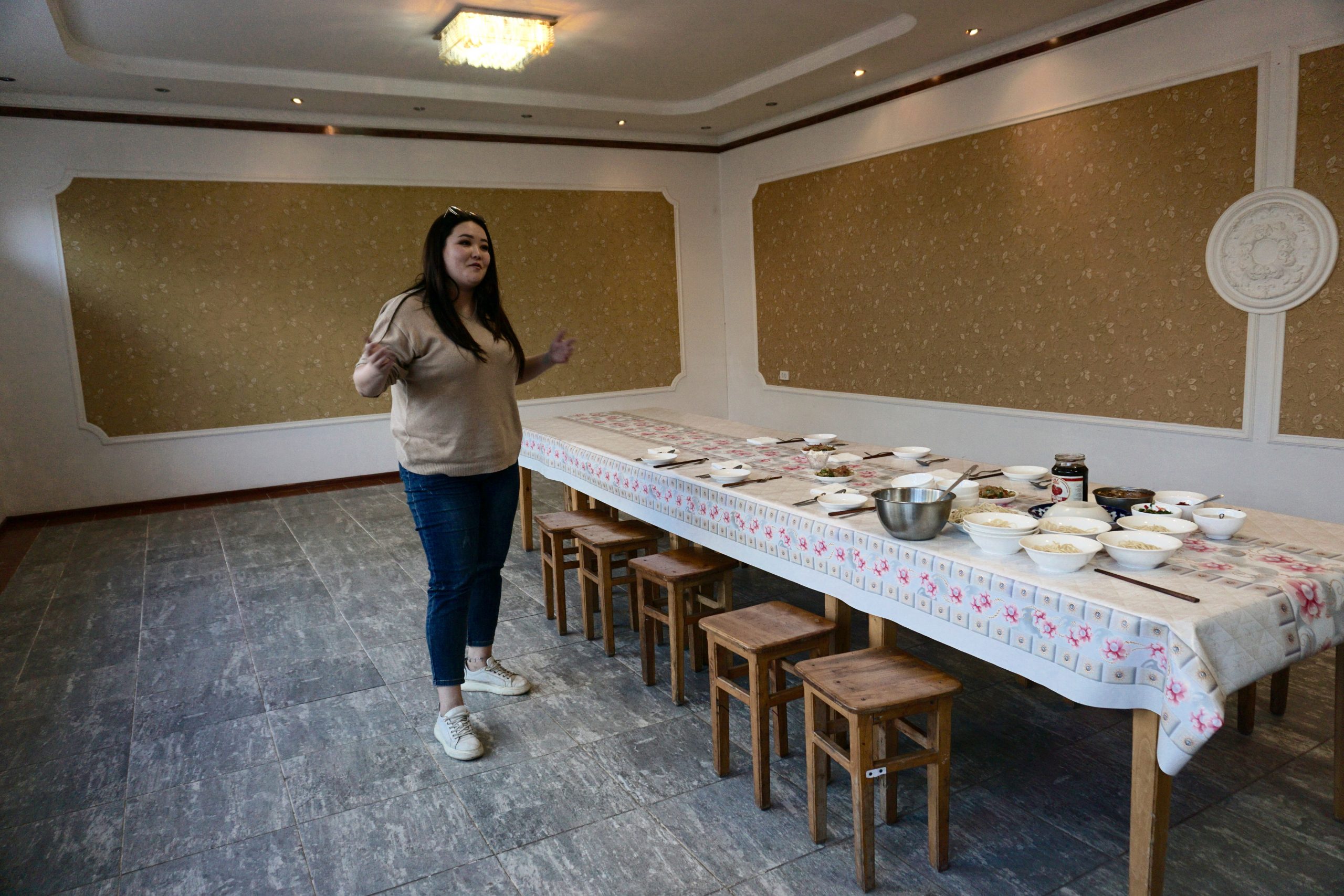 They have very large dining rooms because sometimes you have to serve a lot of people. Their very speciality is Ashlan Fu, a kind of cold noodle soup that you make yourself. You pull down goo noodles from the goo pudding. In the jar is the main ingredient: a proprietary recipe, kept nice and secret, with soy sauce and vinegar. I don’t think it actually sounds that attractive, but it tastes really delicious. 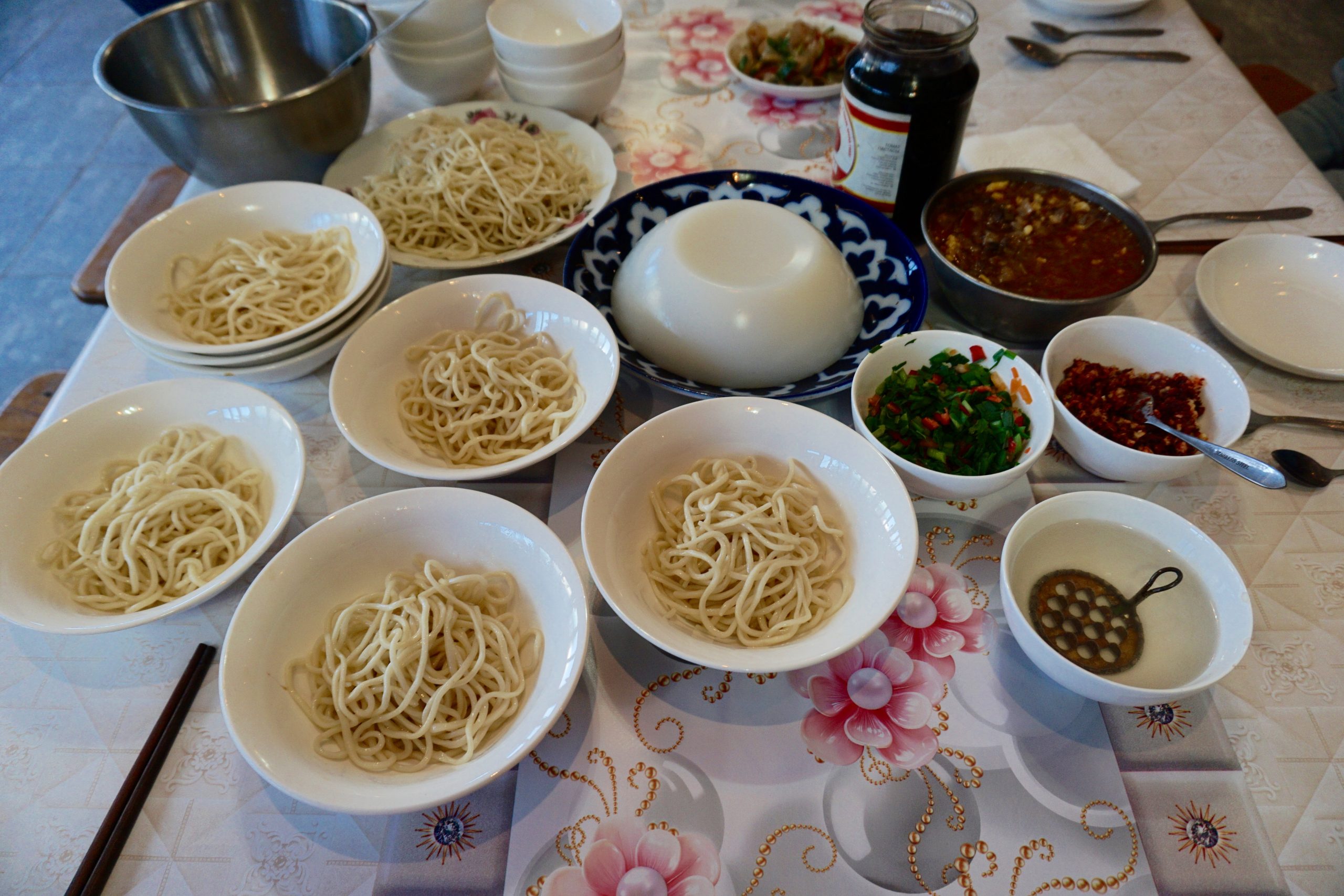 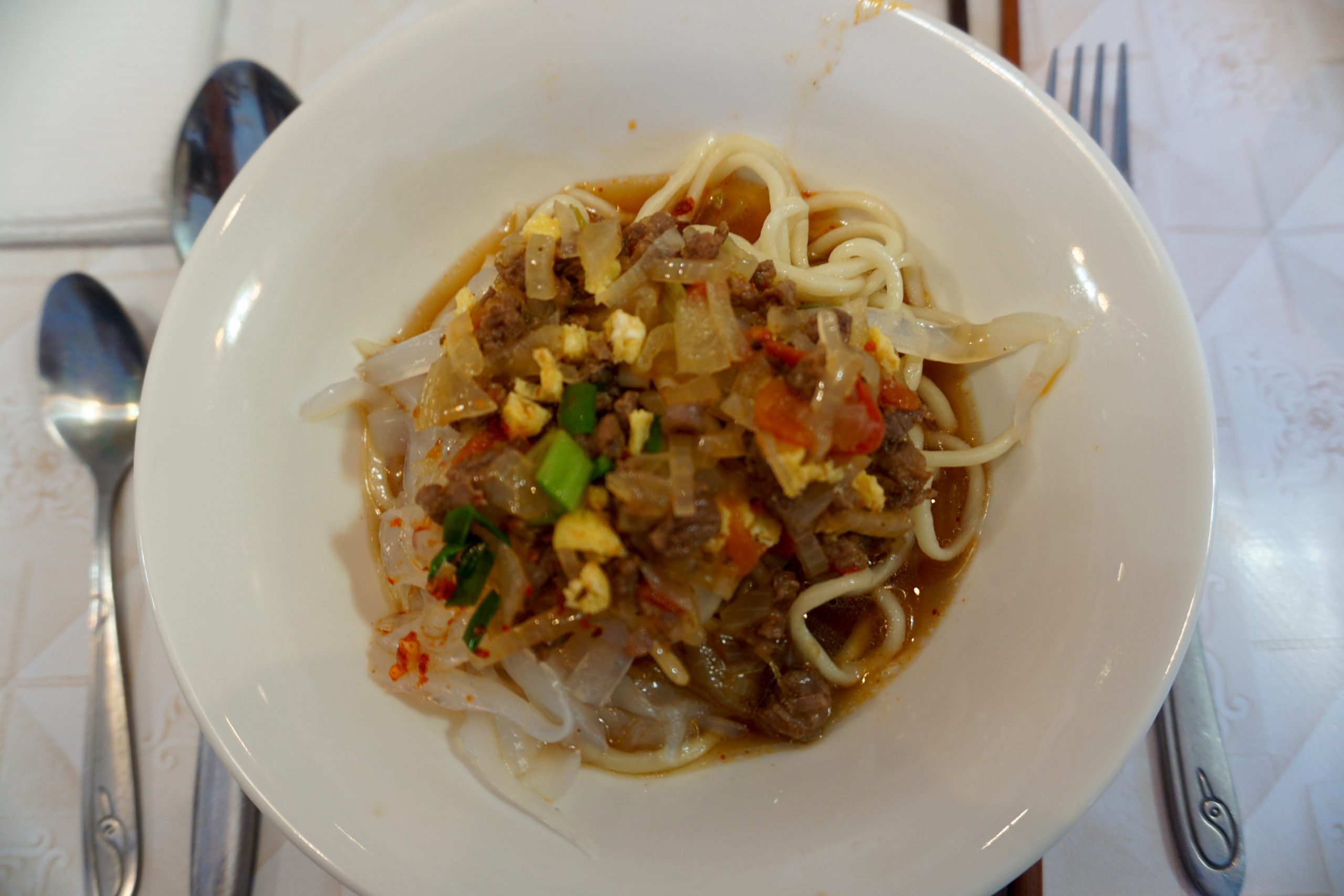 After that, there were many other dishes. All of them very tasty. To be honest, they were tastier than what I usually got in Kyrgyzstan. 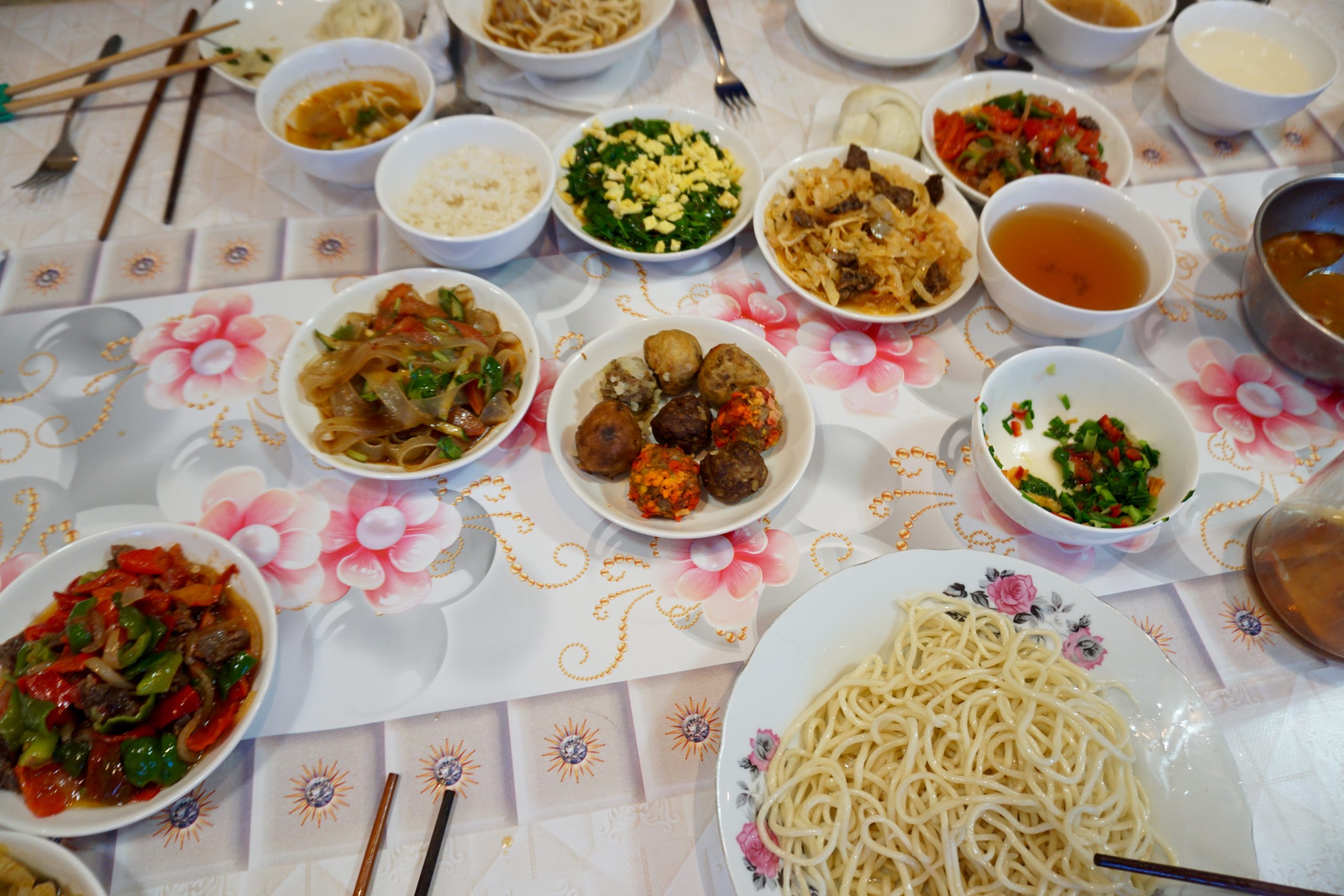 The housewife, 33 years old, 4 children, sat down with us and we could ask. My observation: I find it very difficult with the other tourists as one also has to talk politely, especially me with the child – and then I was actually the only one who asked the woman something.

There are not that many Dungans in Kyrgyzstan, maybe about 50,000. Usually they only marry among themselves, but that caused problems, too many handicaps with the children. So now they have opened up and are marrying elsewhere. After all, they share a similar religion with many Kirghies.

And then it was over, my stomach full, my head pensive, and I was driven straight to the front door of my accommodation.