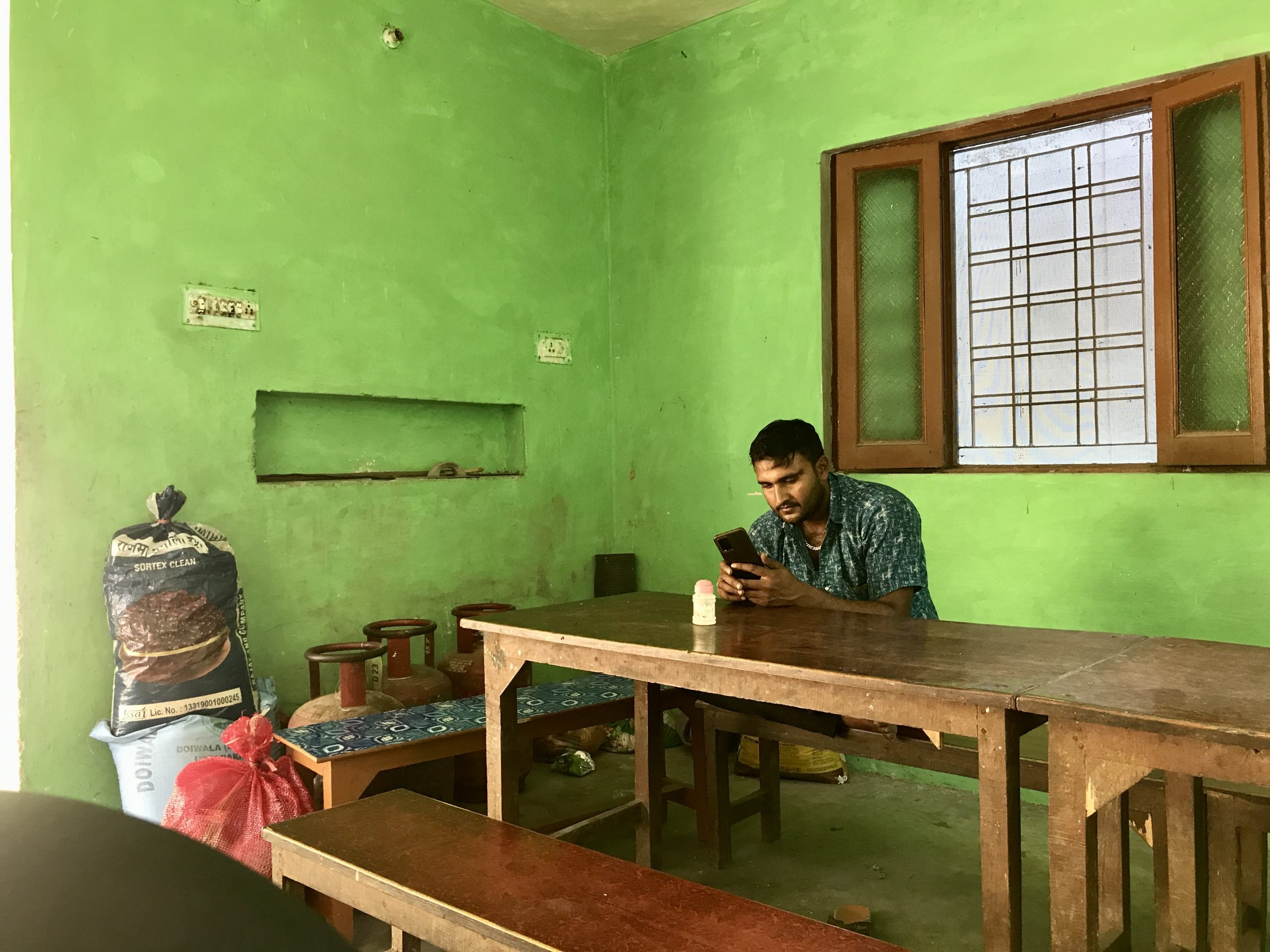 Something happened to me that hasn’t happened to me for years. I have hardly taken any photographs. Yet the country is full of motifs! But I didn’t see anything any more. I didn’t want to look for it any more. Even during the trip I didn’t have much time to look. At least in comparison to other times. I’m confused about myself. But that’s why I just tell the rest of the journey.

As so often before, I calculated the driving time by kilometres (about 140) – and did not reckon with Indian traffic jams. There was a stretch of about 10 km between the overnight stay and Rishikesh, where almost all cars were parked or some tried to pass each other and others immediately shot into supposed gaps. And so vehicles tangled and always take much longer to disperse as if they were simply standing in a neat queue for a few more kilometres. But that’s what we’ve already learned anyway: there is no such thing as a proper queue in India. One could despair of it. But you could also sit back on the motorbike, start laughing and be happy that people are so different somewhere else.

But what was exhausting: the constant sweating and cooling down again – and in Rishikesh I then had a thick cold. Binodh delivered me, I sank onto a soft clean mattress and sniffled half the toilet paper roll. He himself had to rush off – the next customers were waiting in Sikkim. Rishikesh is yoga and Ayurveda and all that – and so I bought an Ayurvedic nasal spray, which wasn’t a spray at all but oil and didn’t do anything. Until the next evening, when I accidentally took it in a somewhat high dose, it burnt my nose – and then the running nose was over! Great stuff! But until then, a bit more happened. 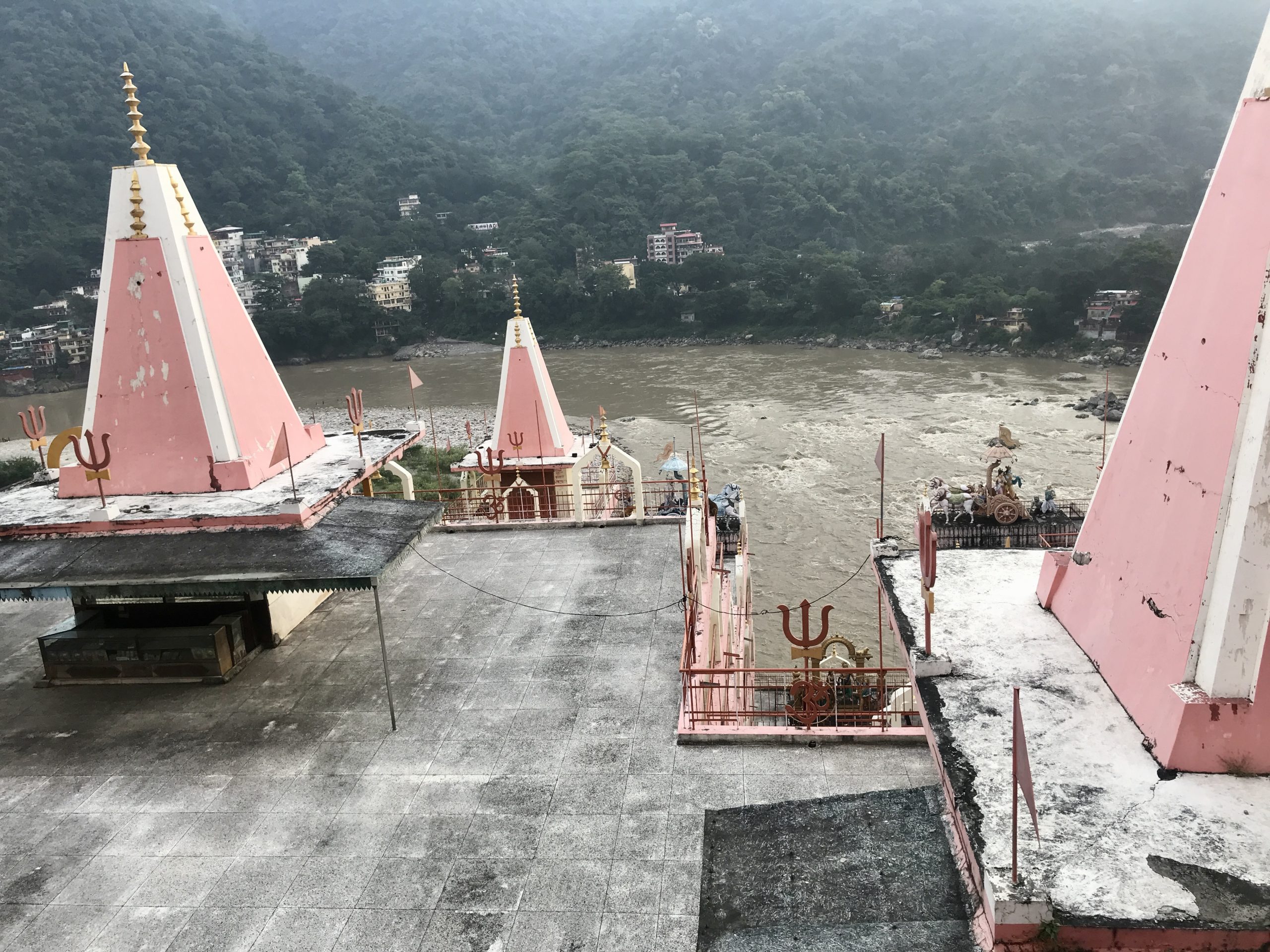 So I had 1.5 days left in Rishikesh doing almost nothing – and then I took a taxi to the train station. Outward journey 45 min to 27 km. Return journey started 2.5 hours earlier – and almost missed the train! They’ve got themselves in a knot again, these vehicles! And what a knot! And if my driver hadn’t joined them – I think I would have been standing for another 2 hours. And it was so hot and sweat was dripping down everywhere. 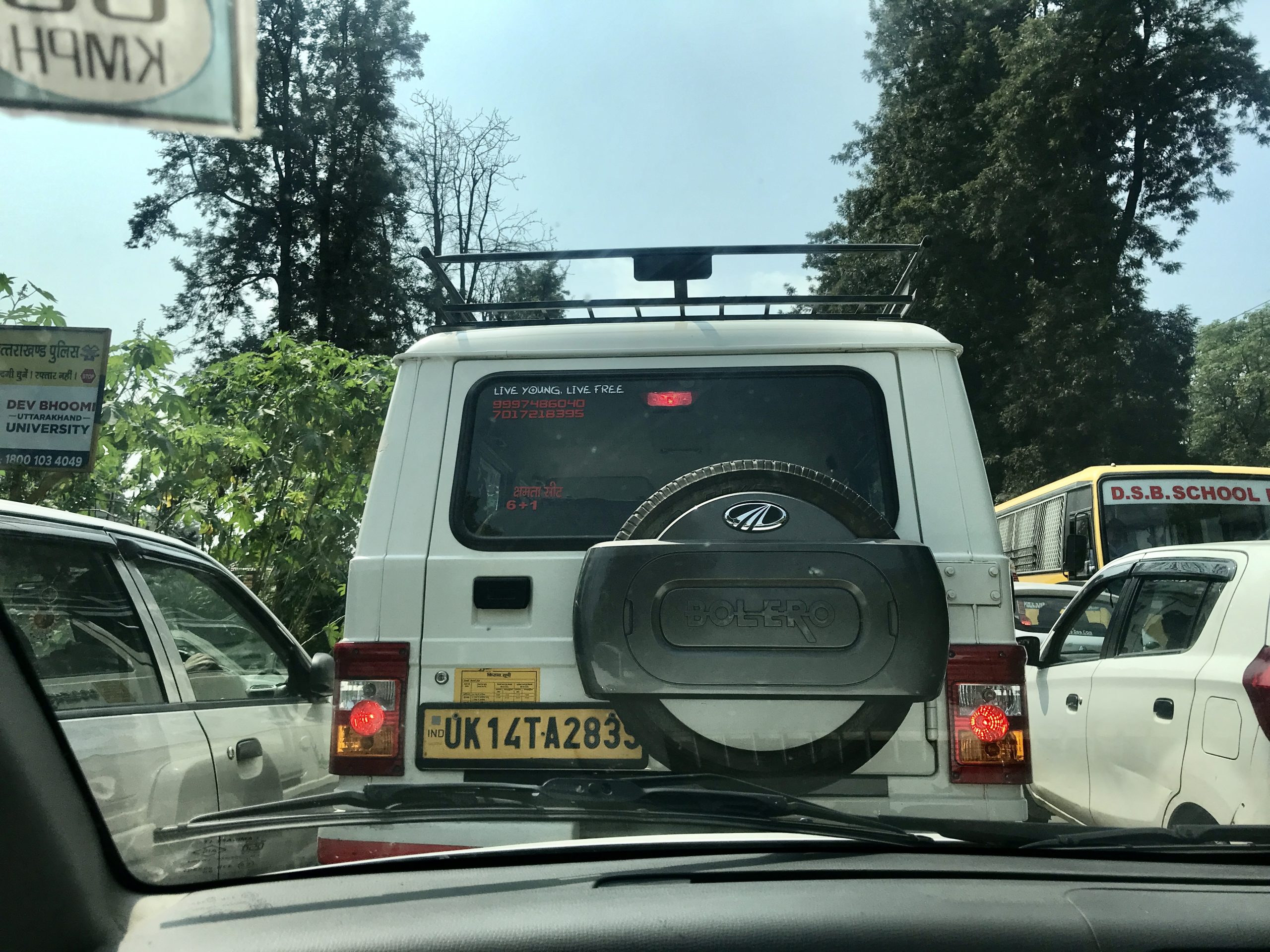 So I reached my train in Haridwar, Prashant had meant well with me and booked AC despite my protests – and right there was my couch. I muffled myself thickly in the blankets and tried to defy the freezing AC right next to me. Conclusion: now I also had a cough. And pity from my fellow passengers. They handed me an Ayurvedic lozenge. It was great, but I couldn’t find a shop in Delhi to get a refill.. 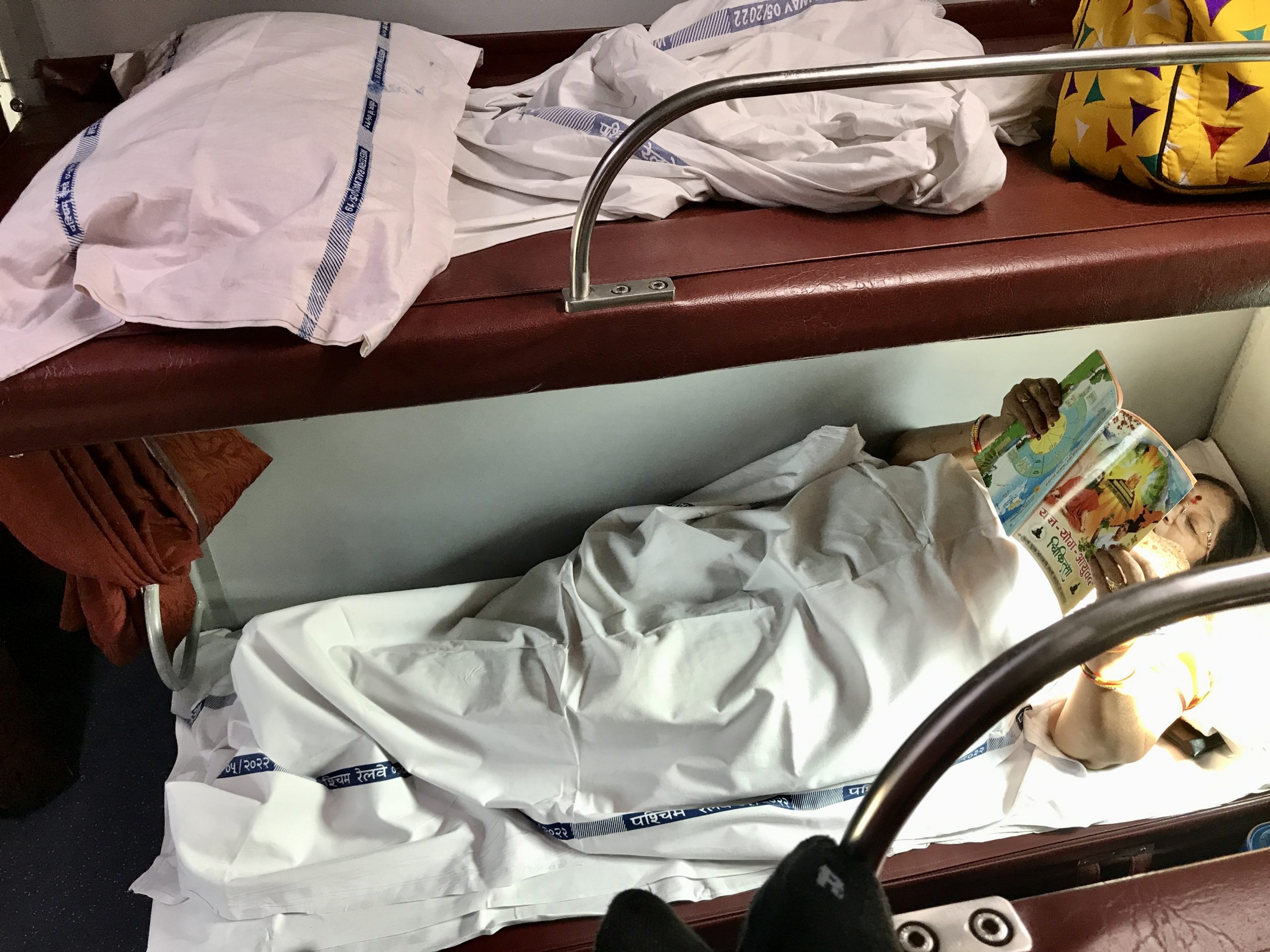 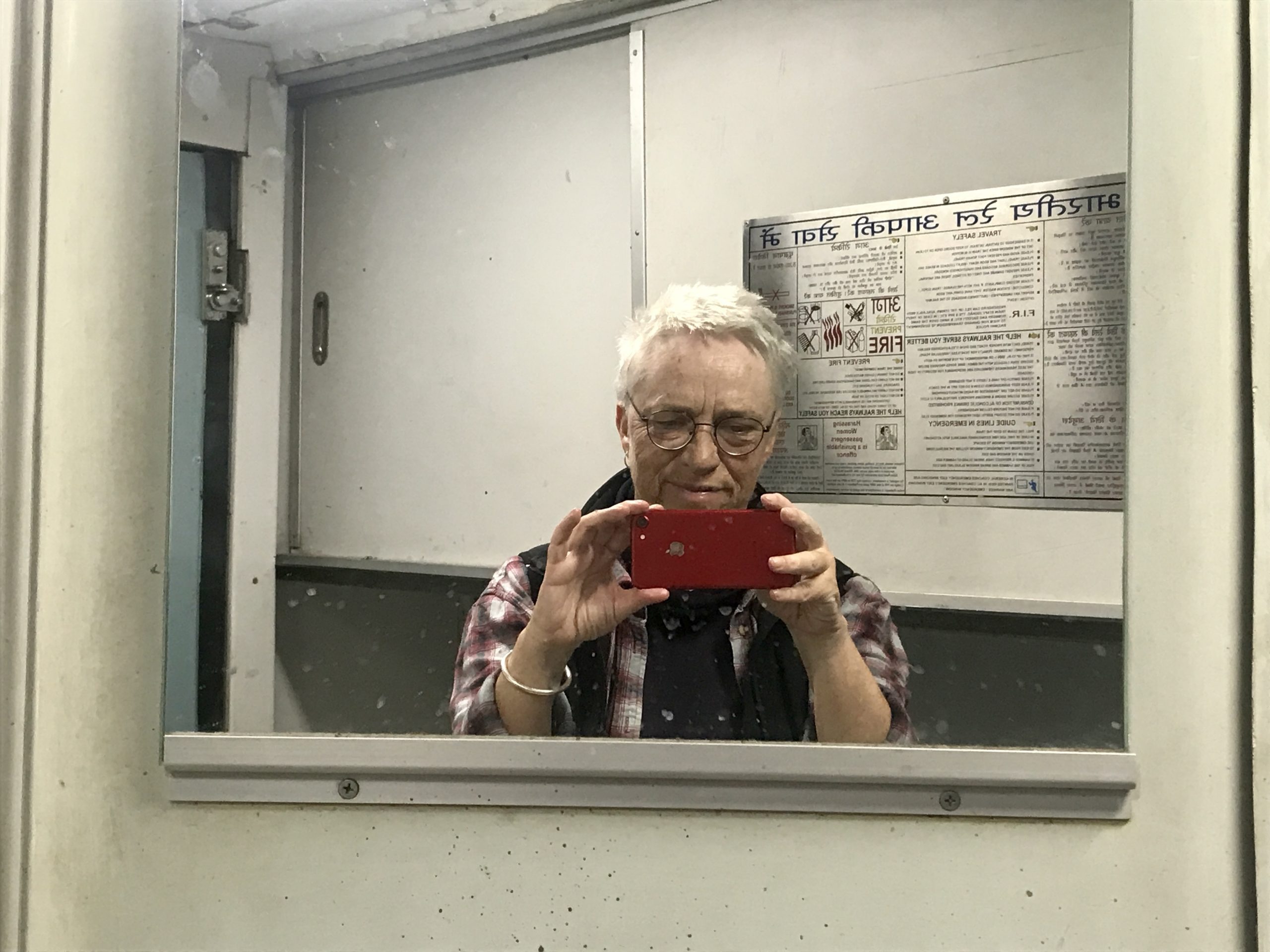 Oh yes, I also went to the hairdresser in Rishikesh. Street barber without a shop. Perfect cut in 10 minutes. 1.50 Euros. I love Indian hairdressers! Also because they laconically give me a man’s cut, which is what I want.

At the train station in Delhi, there were again the classic taxi and tuktuk drivers who wanted to pull me into their vehicles with promises of the best prices, but I stood firm at the prepaid stand until the official came and those who threw around great 400 INR offers quickly disappeared – the ride cost 160 INR. My destination in Delhi this time: Cousin Soenke! He has been living there for 3 years and I hadn’t visited him yet. On the outward journey he was in Australia at a conference, now he was here and welcomed me to his clean, quiet and beautiful home in Chanakyapuri, where he lives with his wife, who was in New York. This was also a new experience for me. So not only to meet my cousin somewhere else than in Germany, but also to experience the whole environment in the diplomatic quarter.

We dined, we talked, we rested, we slept – and the next morning I had difficulties getting up, but I again had an appointment. Before we left, a call for donations had gone out on social media regarding one of the ex-Kamerakidz from Zanskar. He was in really bad shape and had to be flown to a good hospital in Delhi, where he has already had 4 operations and spent 5 days resting in the Ladakh district Quarter. He has one with him who takes care of him, his daughter is a nurse in Delhi and they received me in a small room where he was lying in a bed. I would like to keep some things under wraps here (diagnosis etc.), but tell you about it anyway. 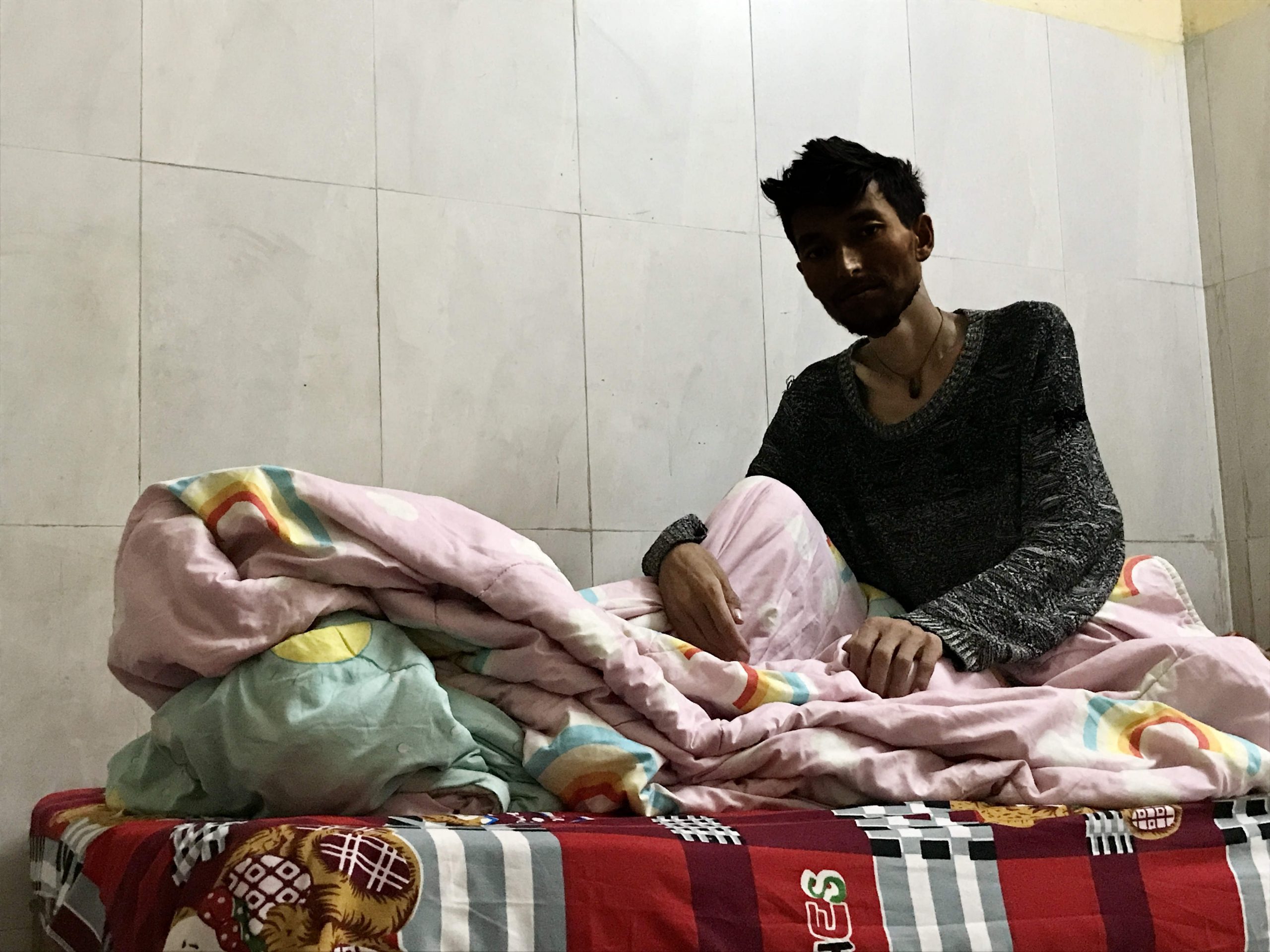 He’s even not just “some camera kid”, I’ve met him for many years and got to know him as an always friendly and hardworking boy who also sings in an insanely touching way. And then this skinny misery – he weighs 37 kg and is rather 20 cm taller than me. In principle, this is my third hard visit to a sick person in India – much more than in Germany. I used to be afraid of such visits – and even now it is quite difficult for me. I would love to burst into tears right away. But I swallowed the tears inside for later and tried to look encouraging. The visit shook me up a bit emotionally – and I’m glad I did it.

Then back to Soenke and he showed me around his neighbourhood a bit, we had coffee (or fresh orange juice! With a biscuit!), dinner, caught up on family stories – and when it was time for my airport taxi, I was full of resistance. I didn’t want to. I had sort of found “my India” again with those square, uncomfortable, crazy people, the very dear connections with former strangers, refreshed acquaintances and all. Almost tearful goodbye. I hope I come back sooner than letting another 3.5 years pass. 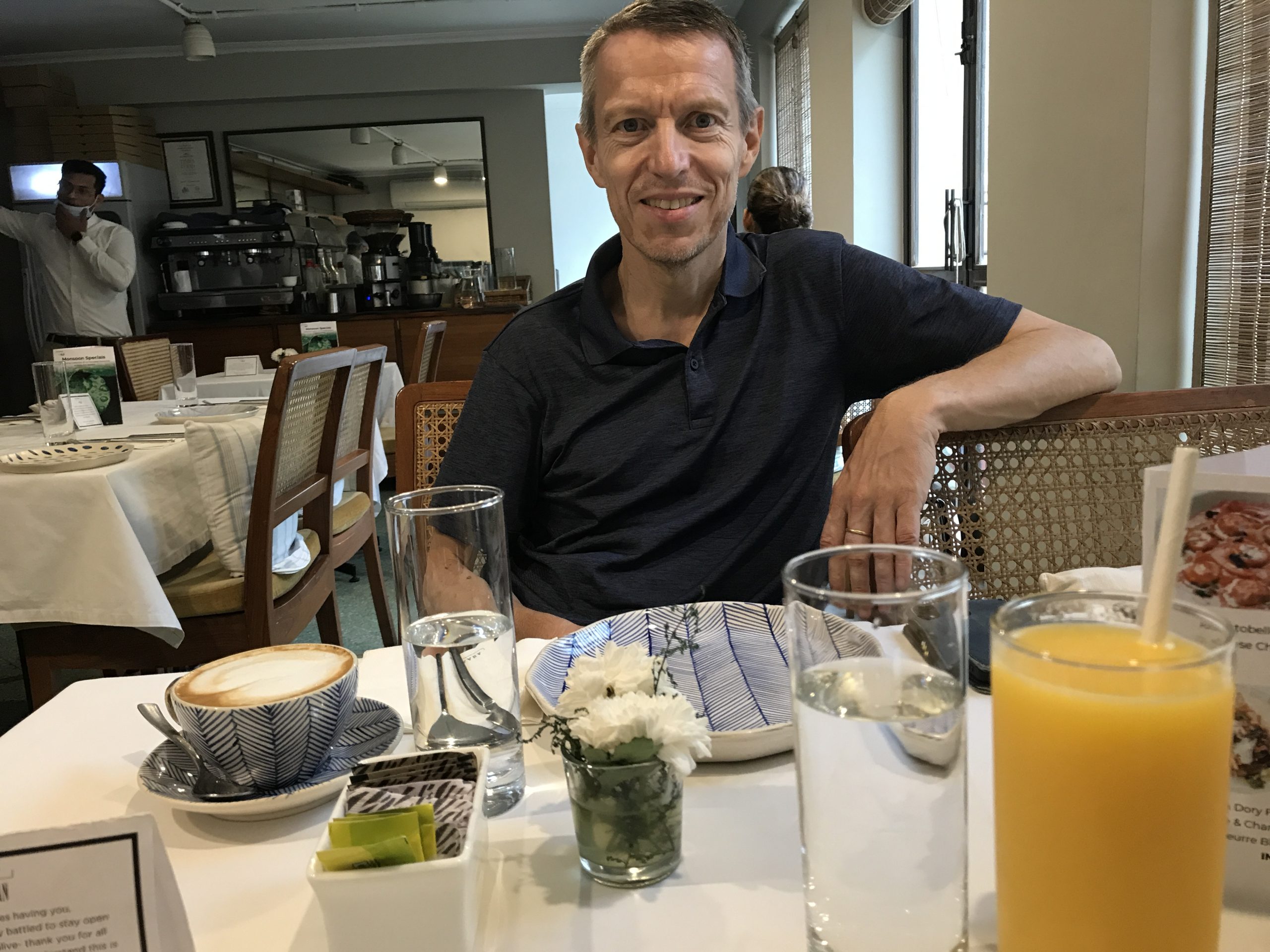 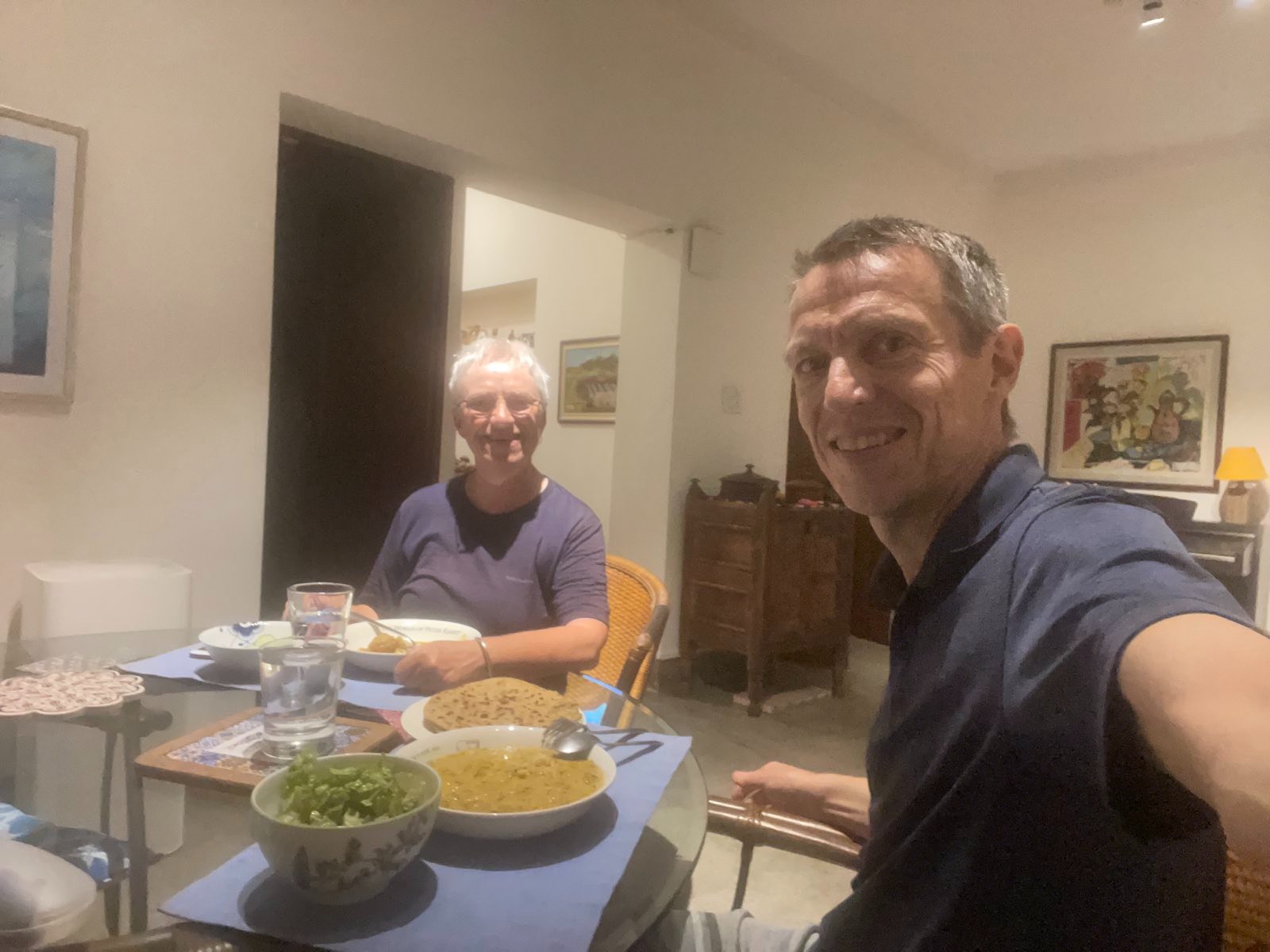 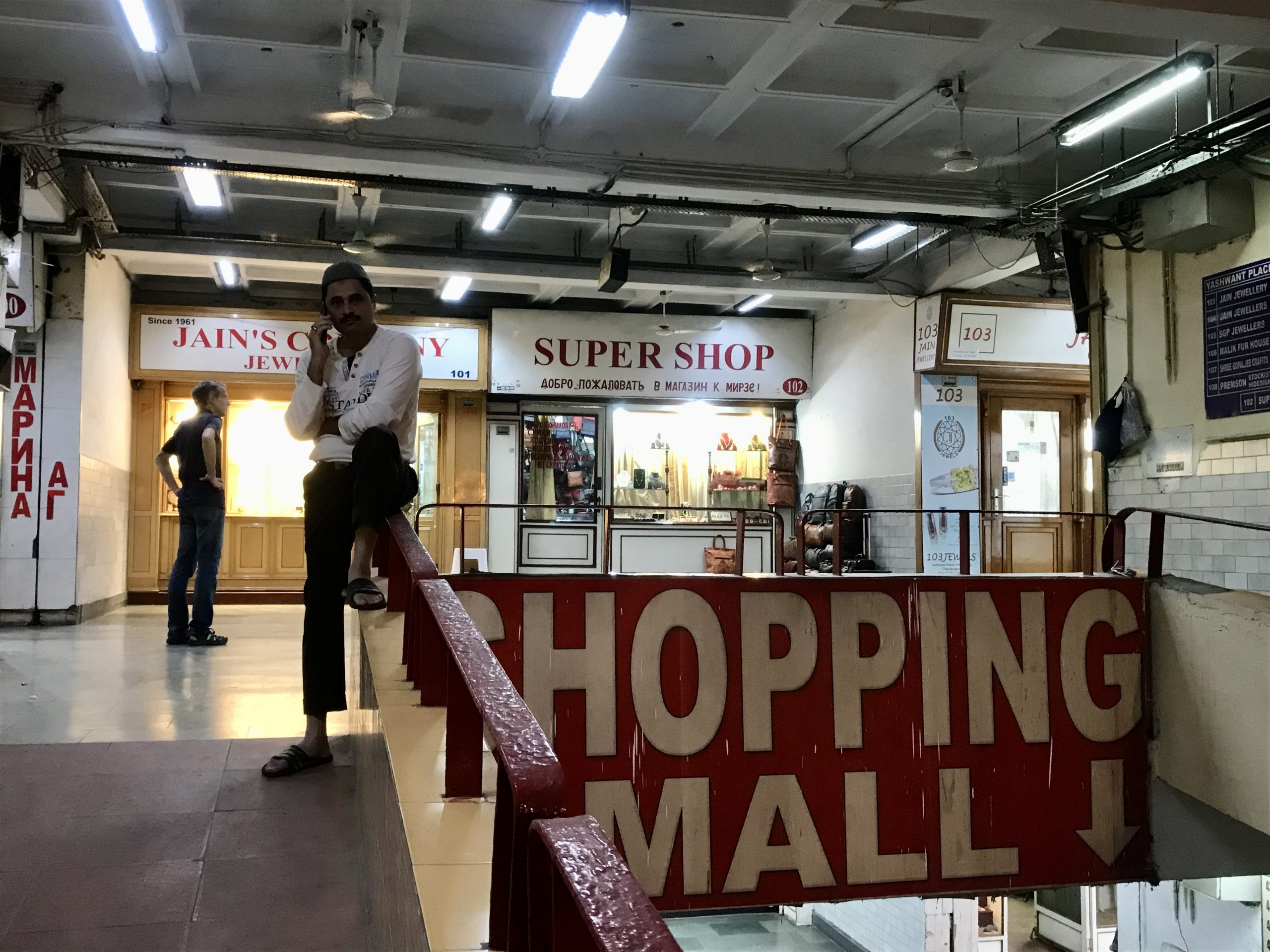 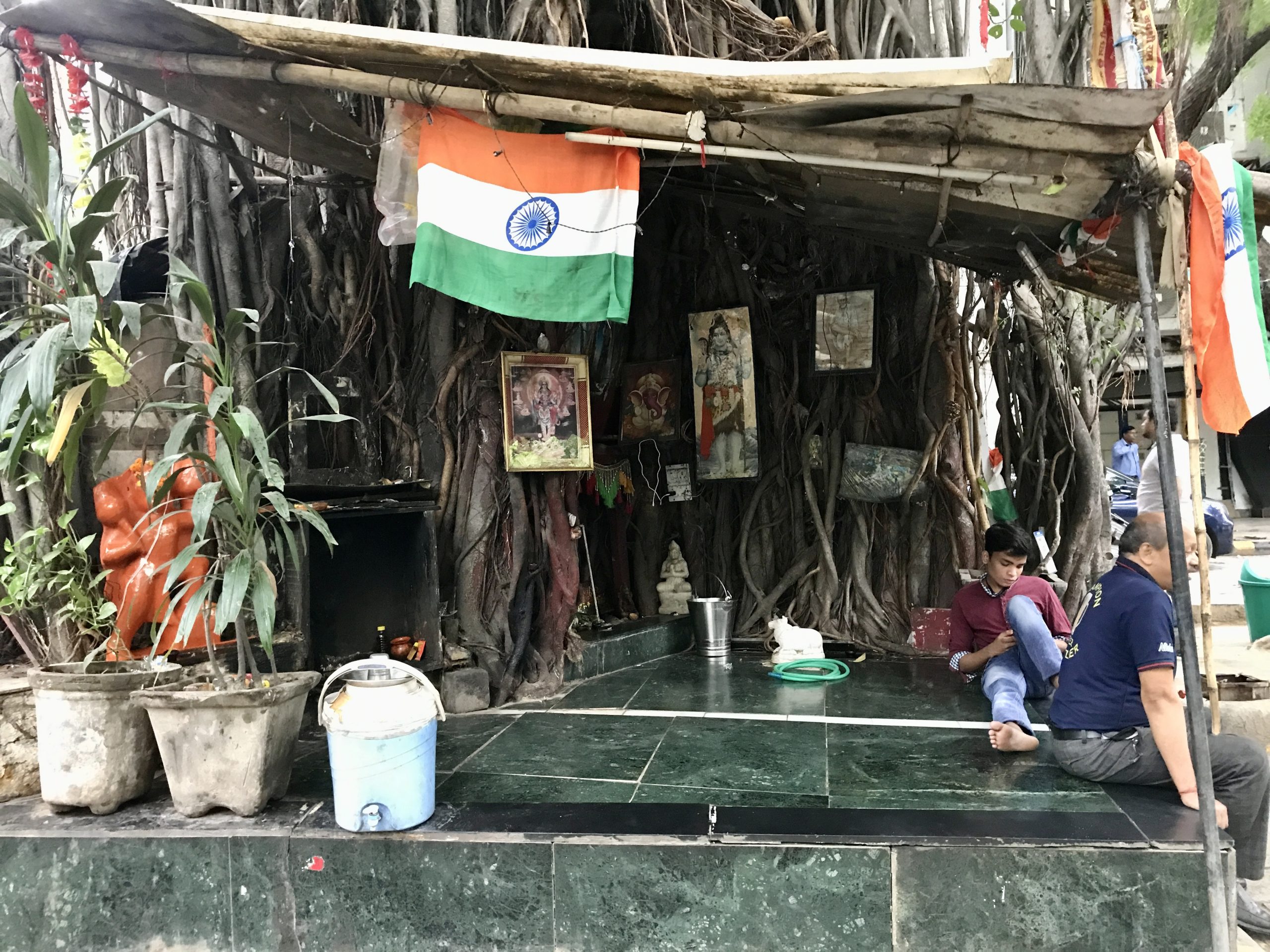 Soenke can tell wonderful stories about his neighbourhood. An alcohol bar opened next to the tree temple and was very popular and successful – until someone realised that it was not possible next to a tree temple and then it had to close again.