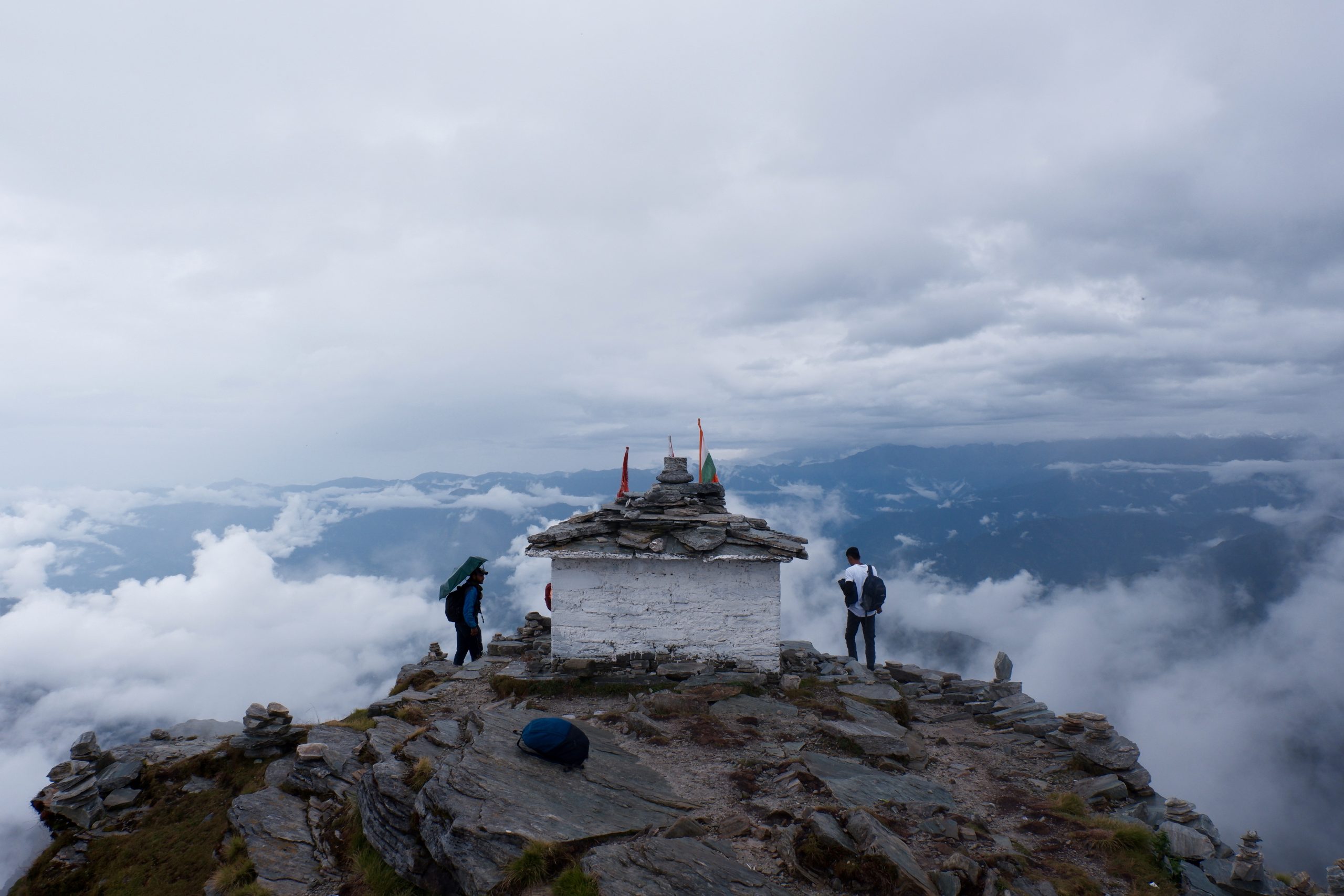 So first we went to the Chandrashila. Prashant started his rubbish collection here and Binodh + I sat around, looked around and took photos. 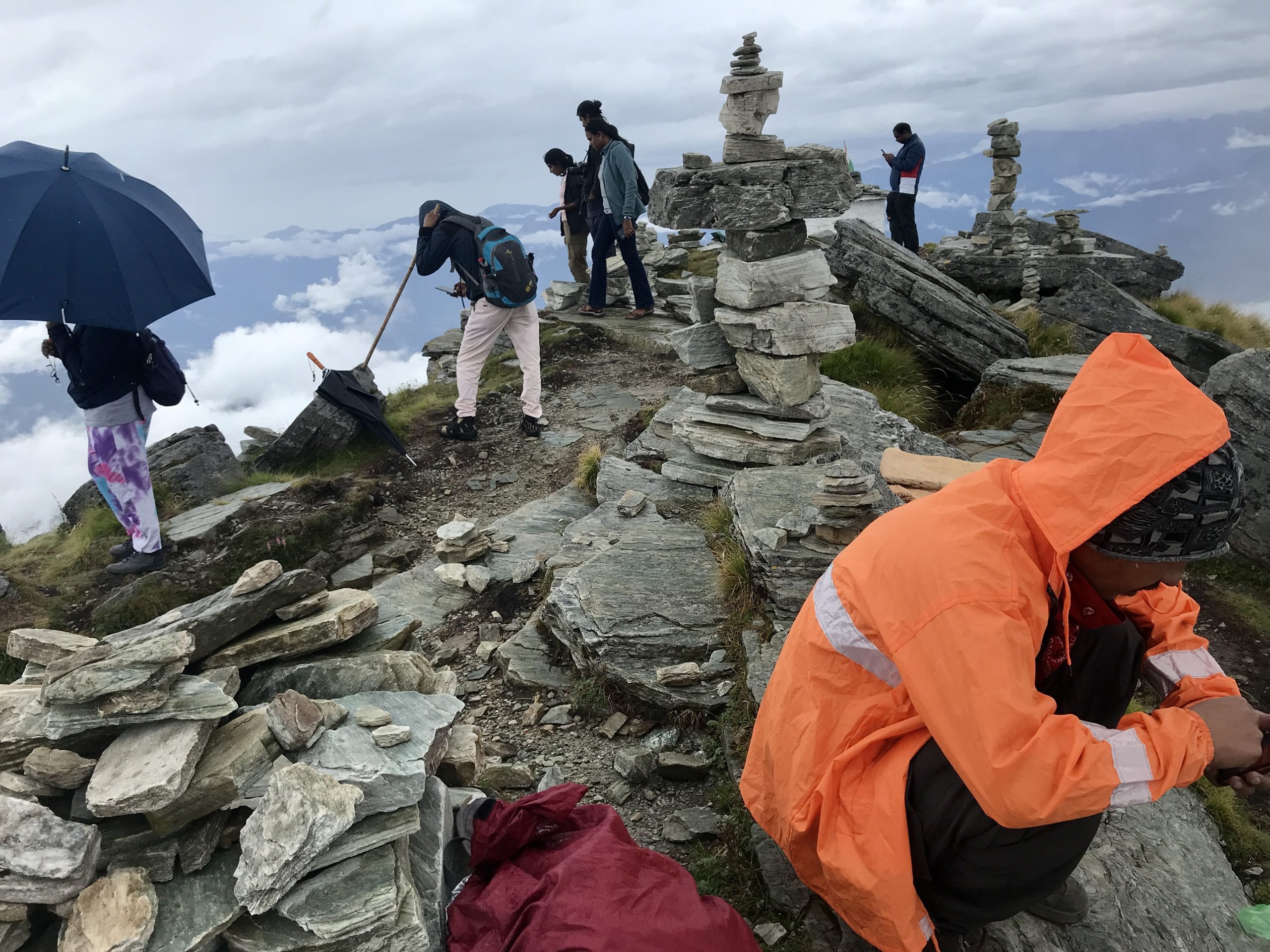 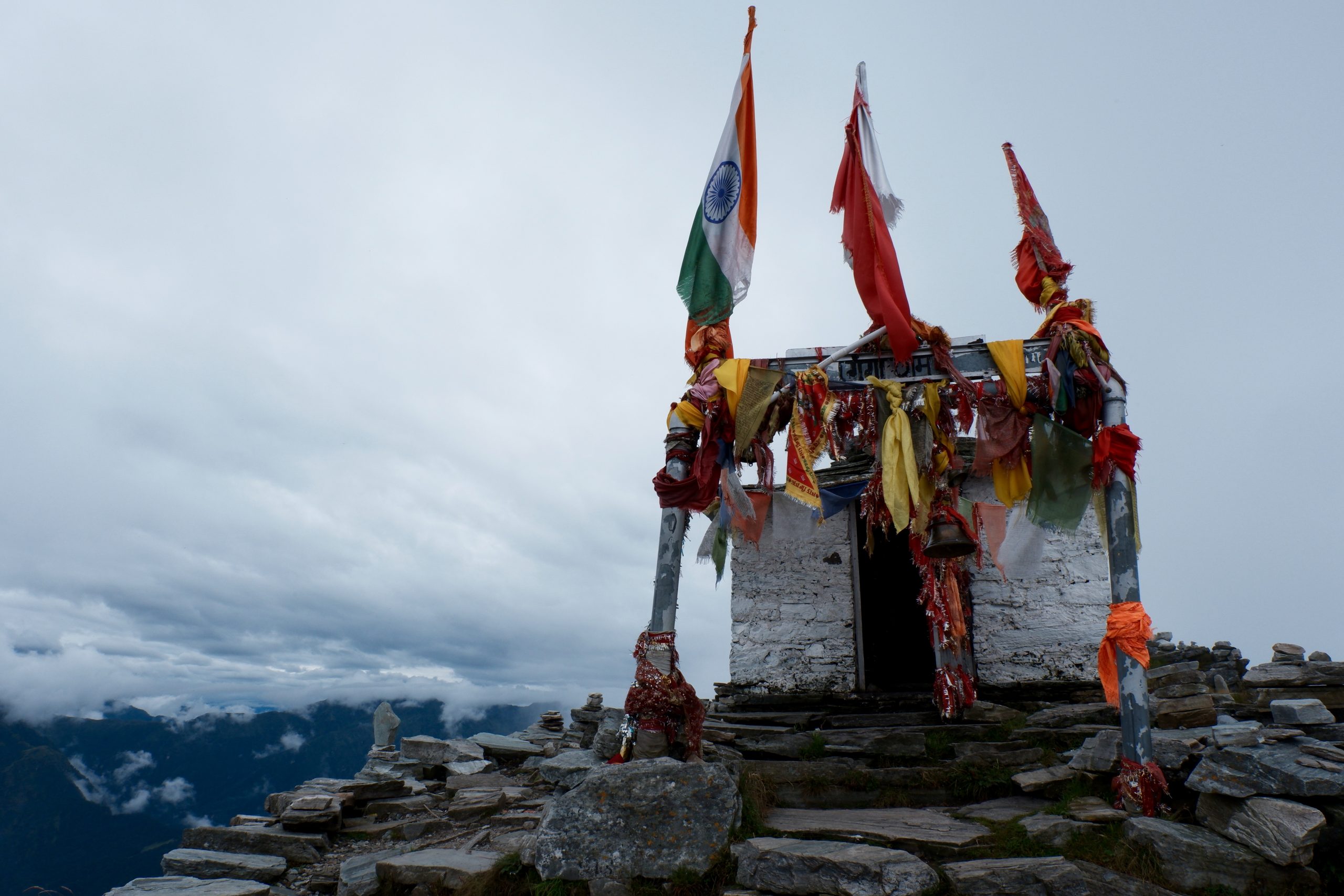 There is also a small temple at the top, dedicated to Rama, who, after killing Ravana, repented and sought redemption for his sin and set out to find Shiva, who spent much time in the Himalayas. He is said to have meditated on Chandrashila. Other sources, however, say that it was Shiva who meditated here. Or the moon god Chandra. 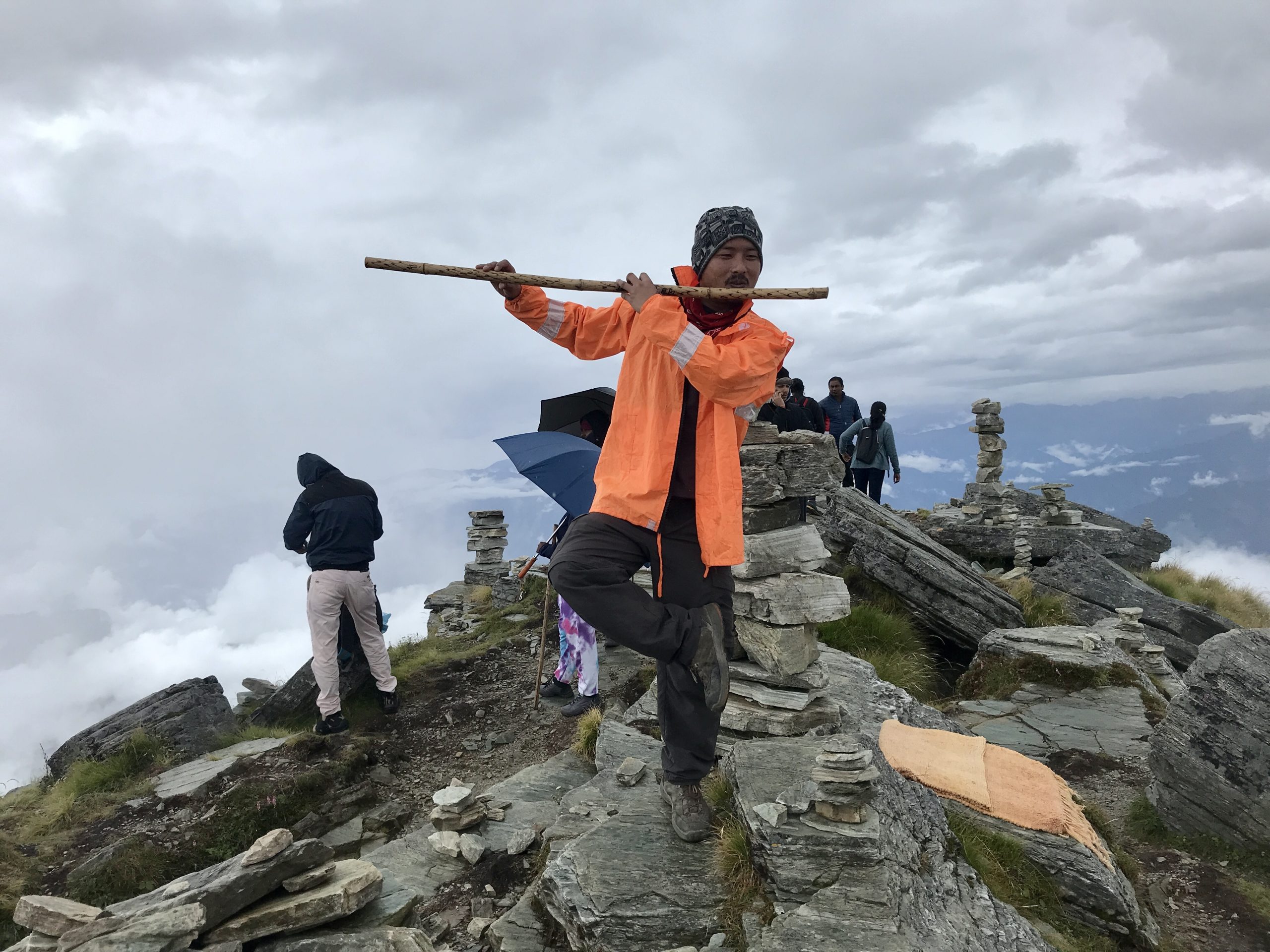 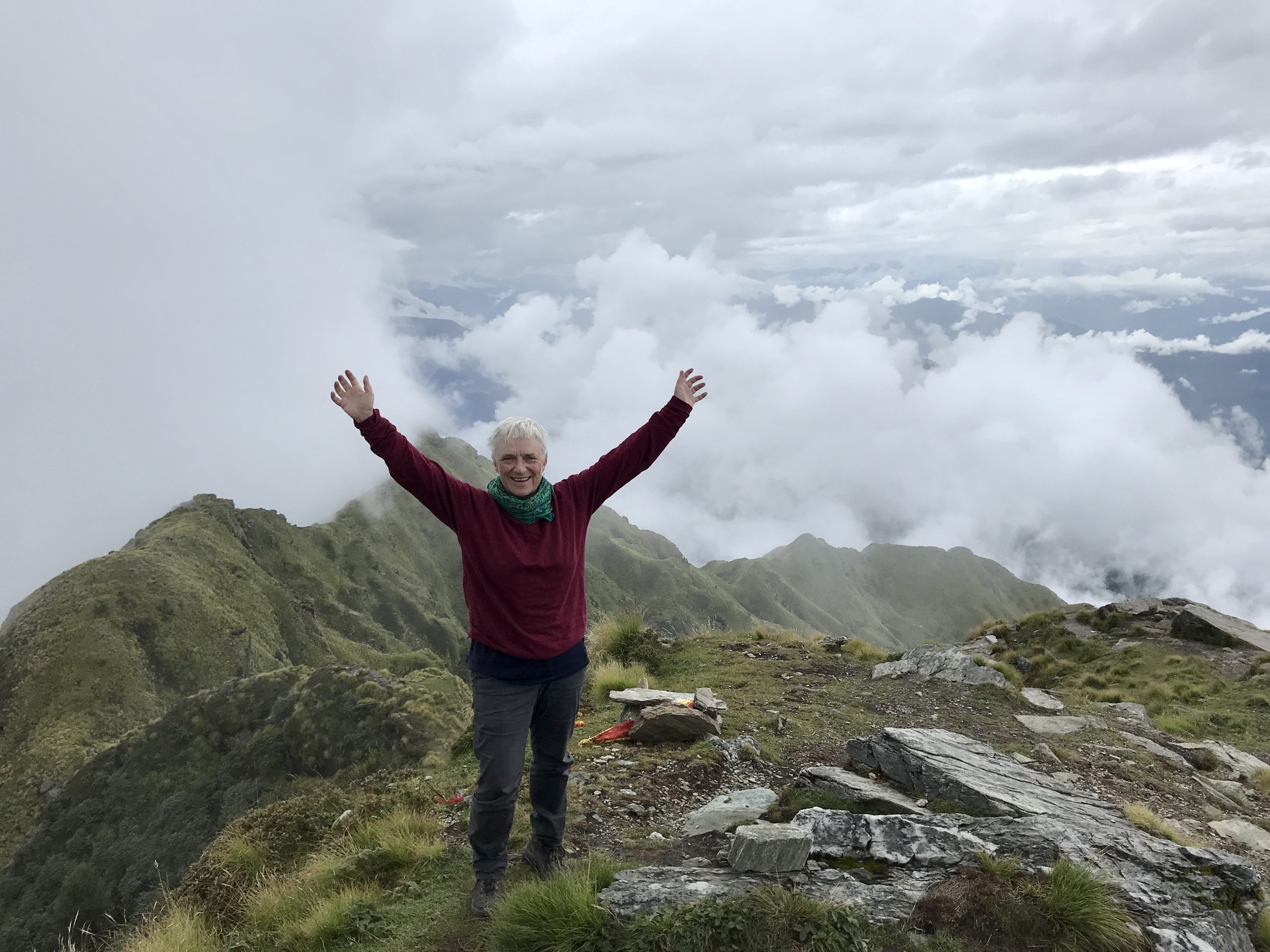 But now for the story of the Panch Kedars recorded in the Mahabharata. At that time, the related families of the Pandavas and Kauravas were at odds for reasons and fought each other. The Pandavas were victorious and cut off the heads of their cousins.

Only afterwards did they realise what a rotten sin that was (also the Brahmins killed in that war) and they repented and wanted to be redeemed from it. Therefore, they surrendered their kingdom to other relatives and went to seek Shiva. They went to Varanasi, where Shiva liked to stay. But Shiva did not like these lousy nasty people, did not listen to their prayers, turned into a bull (Nandi) and hid in the mountains of Garhwal.

The Pandavas also went there and searched further. One of them saw a bull near Guptakashi and was sure that it must be Shiva, ran after him and caught him by the tail and hind legs. Shiva, however, dissolved and disappeared underground. Later he reappeared in parts, his hump in Kedarnath, arms + chest in Tungnath, the face in Rudranath, navel + belly in Madhyamaheshwar + the hair in Kalpeshwar. The Pandavas built temples all over the place, worshipped him and poof, the sins were forgiven! 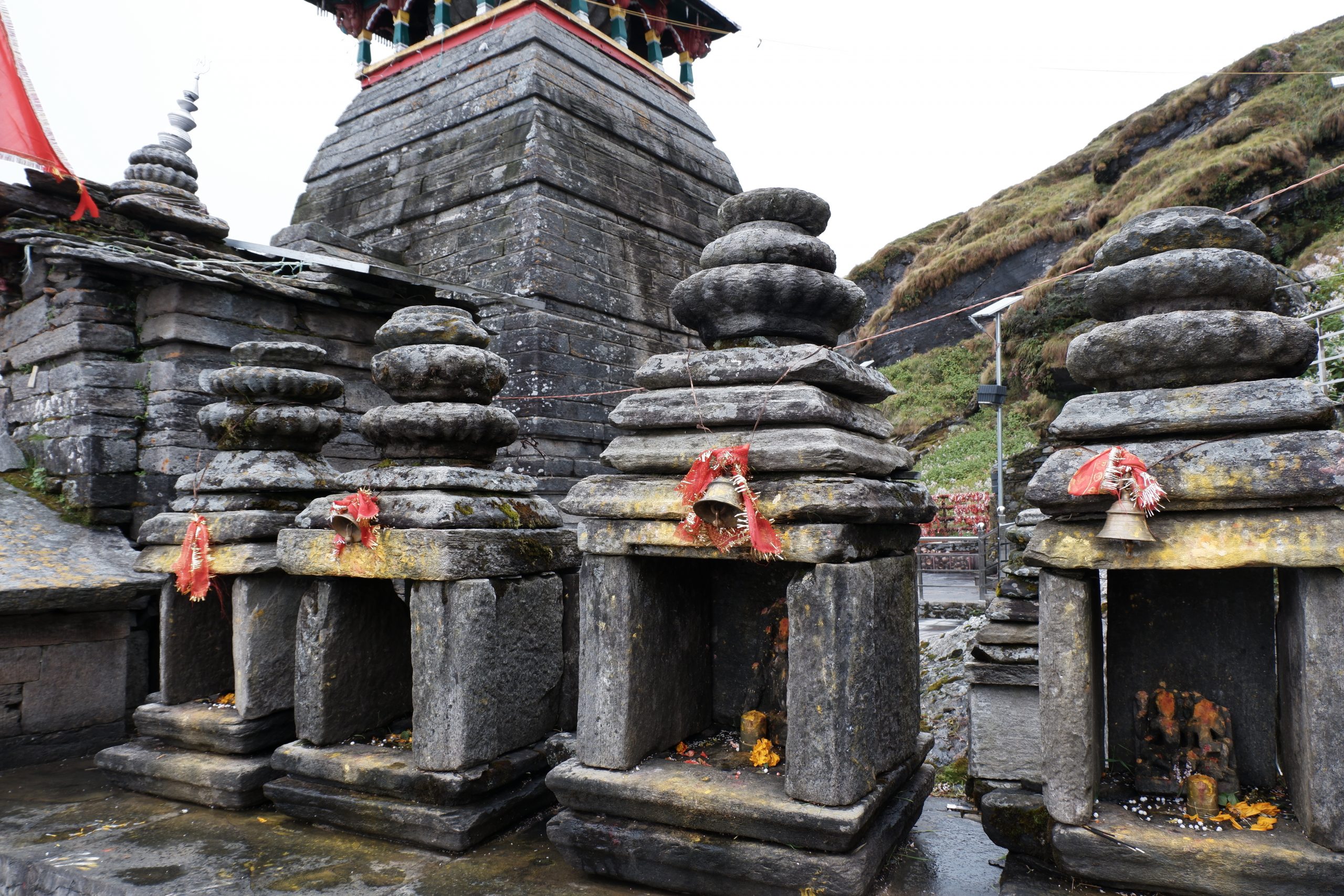 So all three of us went to the temple, Prashant stayed outside, I went in and snapped a bit and Binodh really wanted to go in. There are two inner rooms in the temple, one is opened by the priest from time to time and you can see arms and chest (made of stone), the other one is only opened at Aarti times in the morning and evening. 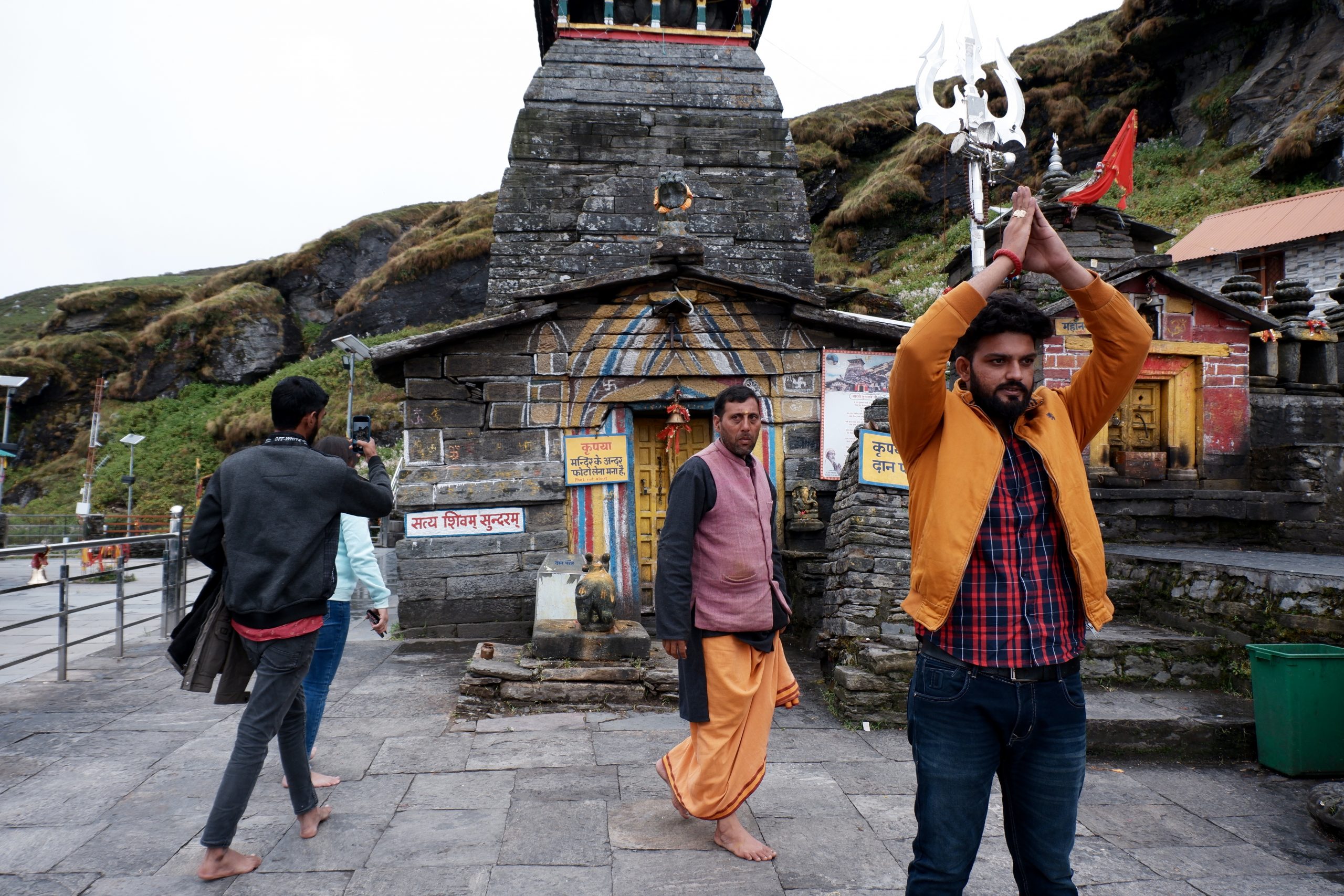 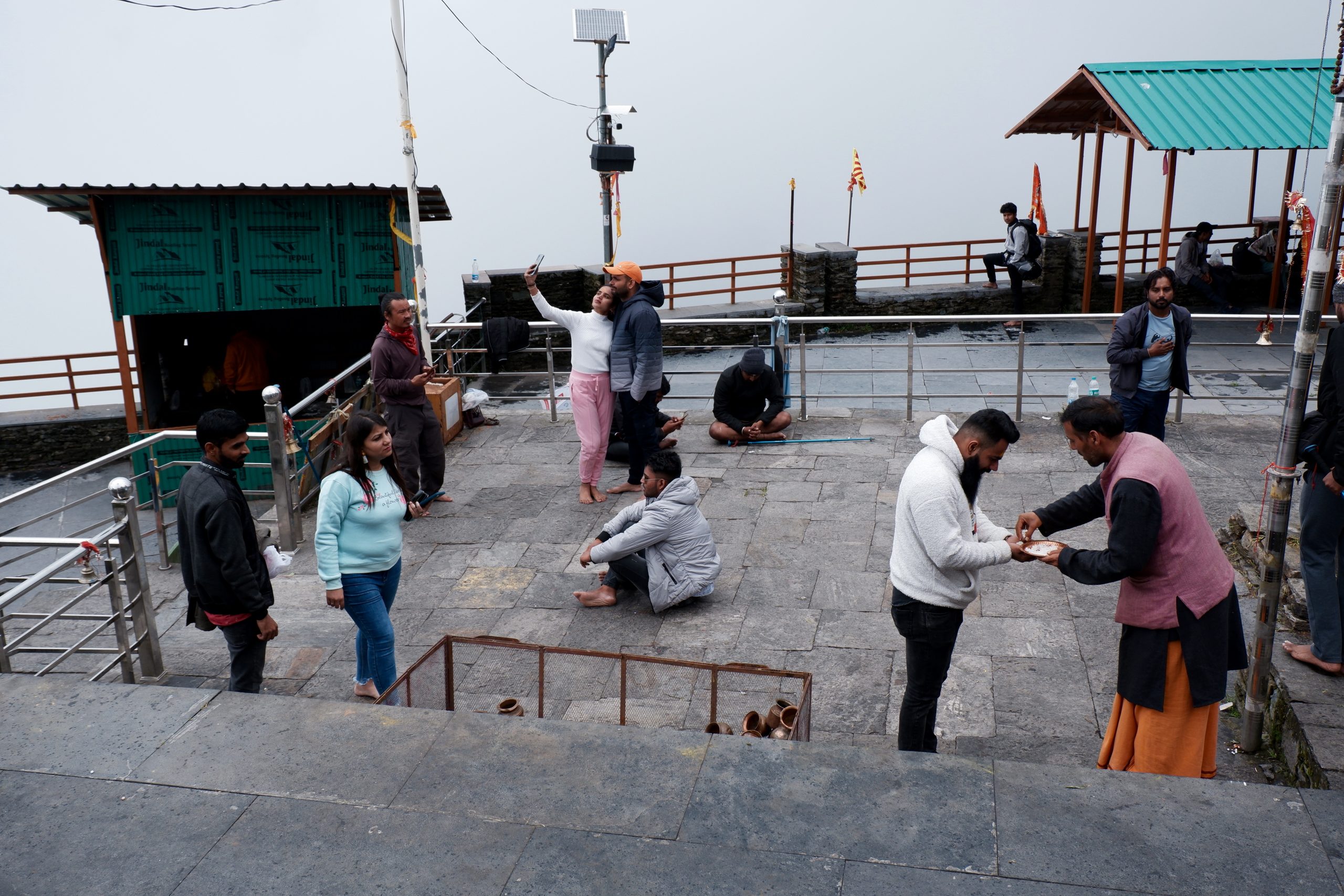 Afterwards we dined in one of the small restaurants and then – wonder of wonders – the sun came out for about 15 minutes! 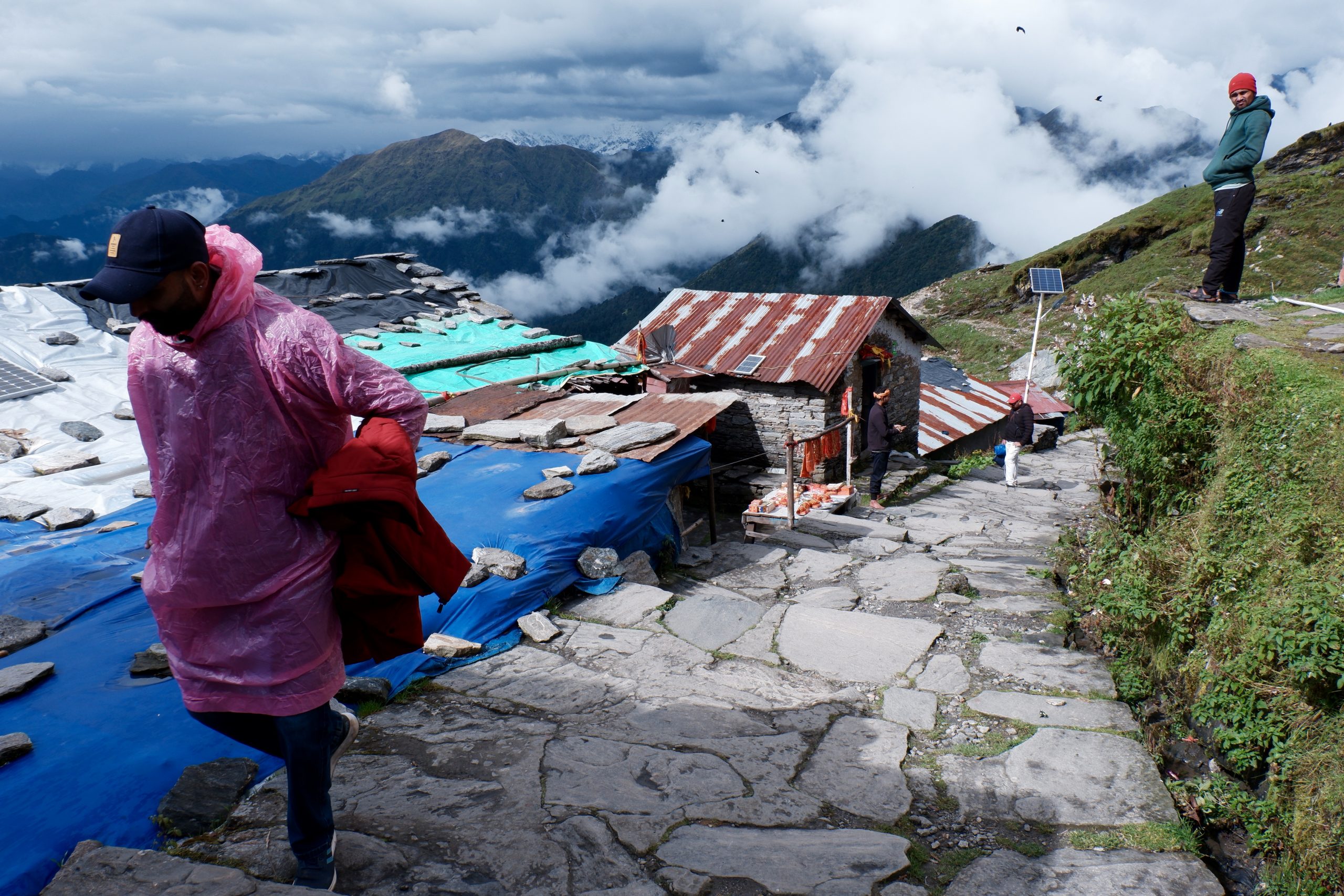 We then started our descent again, Prashant already had 2 full plastic bags of rubbish in his hand. We found another larger bag and helped a little with the rubbish collection. There was a lot lying around and it is only collected at the end of the season. Prashant then put the bag of rubbish on his Scooty and drove to Rishikesh. Then he transported the bag, which was still full, by bus to Delhi, where he sorted it properly and took it to the respective destinations. 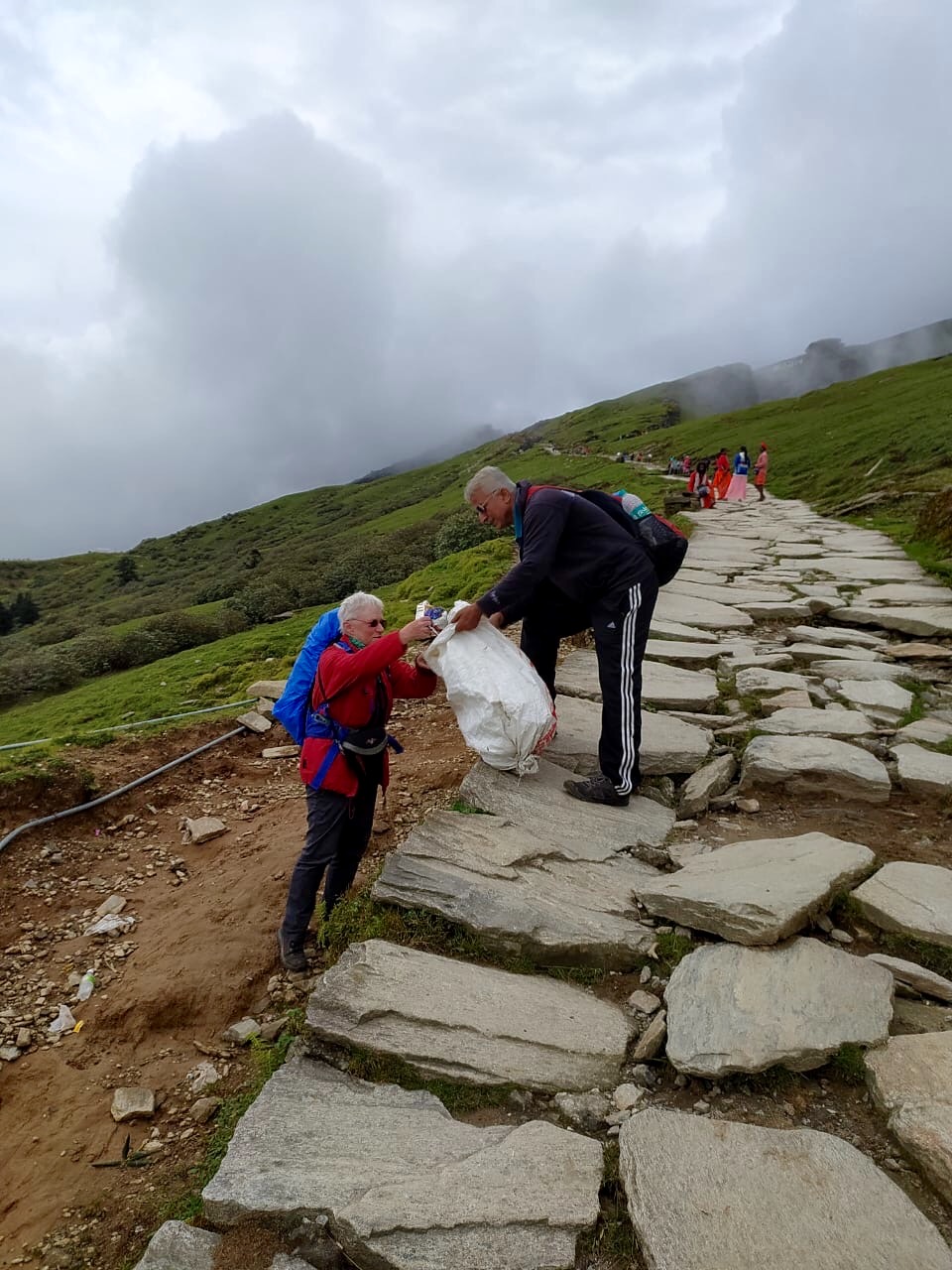 It was still not super easy in our travel group, but it worked. In any case, we were all happy about the great nature and the changing views with the clouds and the mountain landscape. The next day we split up, Prashant started back to Rishikesh and Binodh and I continued to the northeast. How did we do there? Next blogpost! 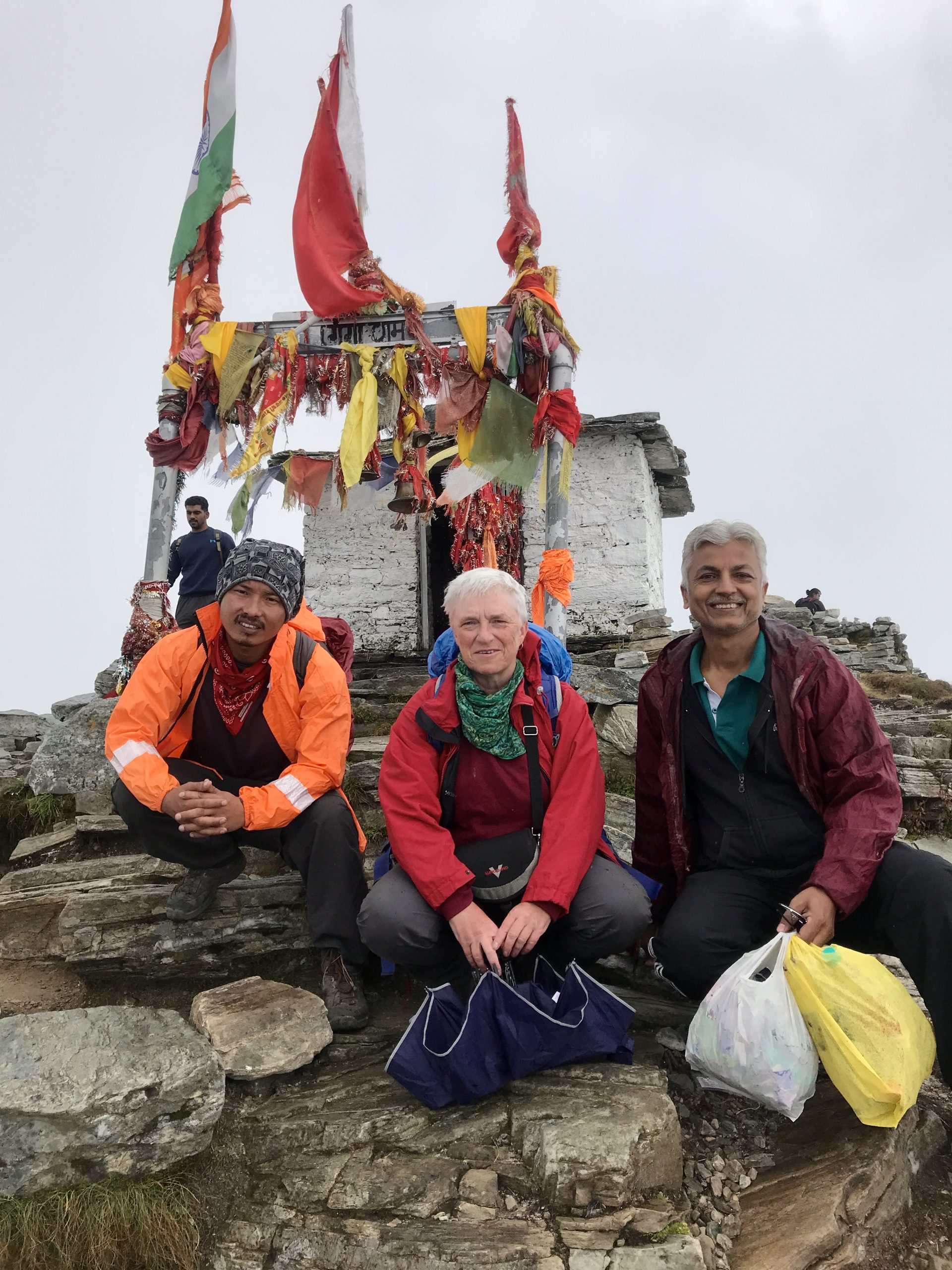 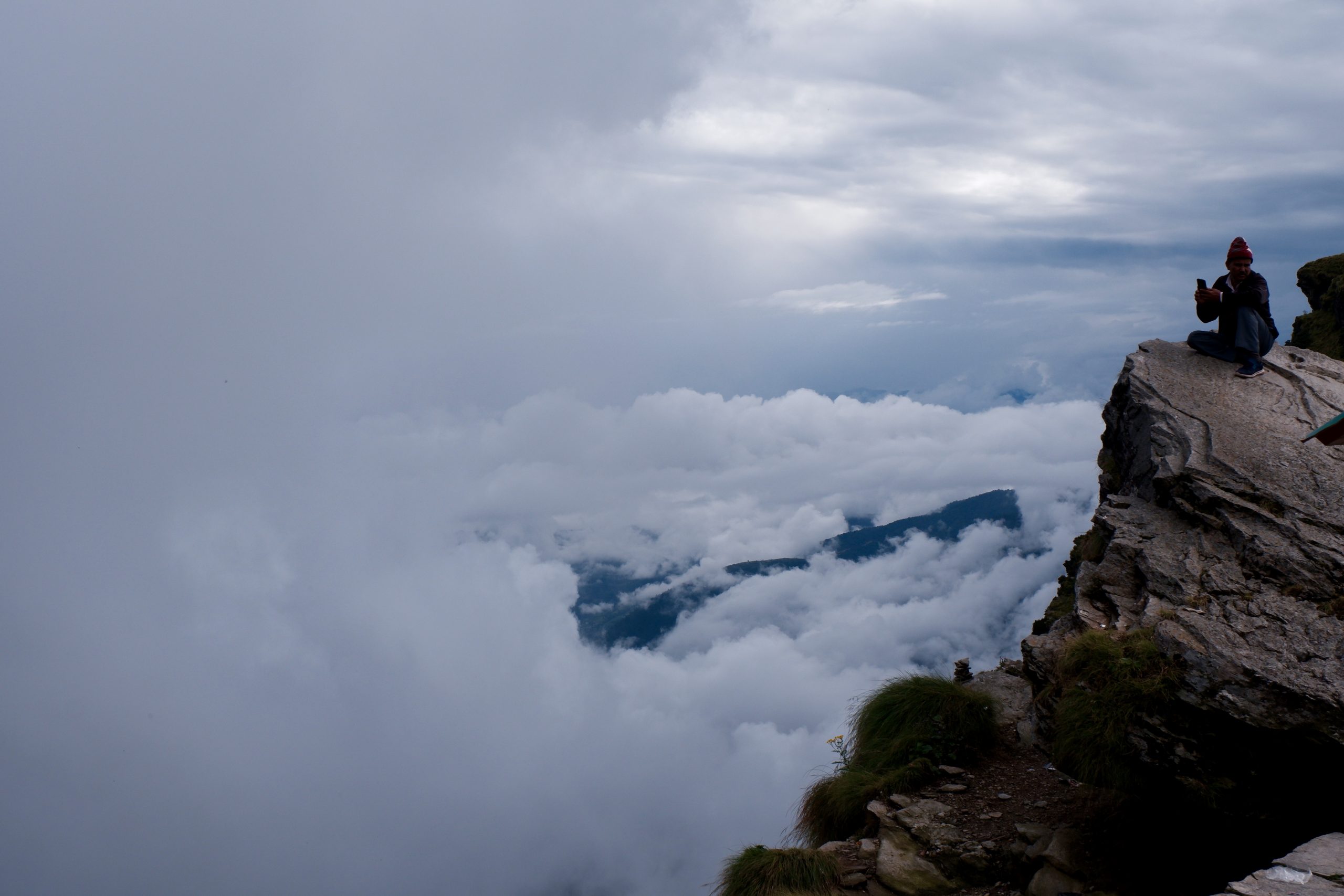 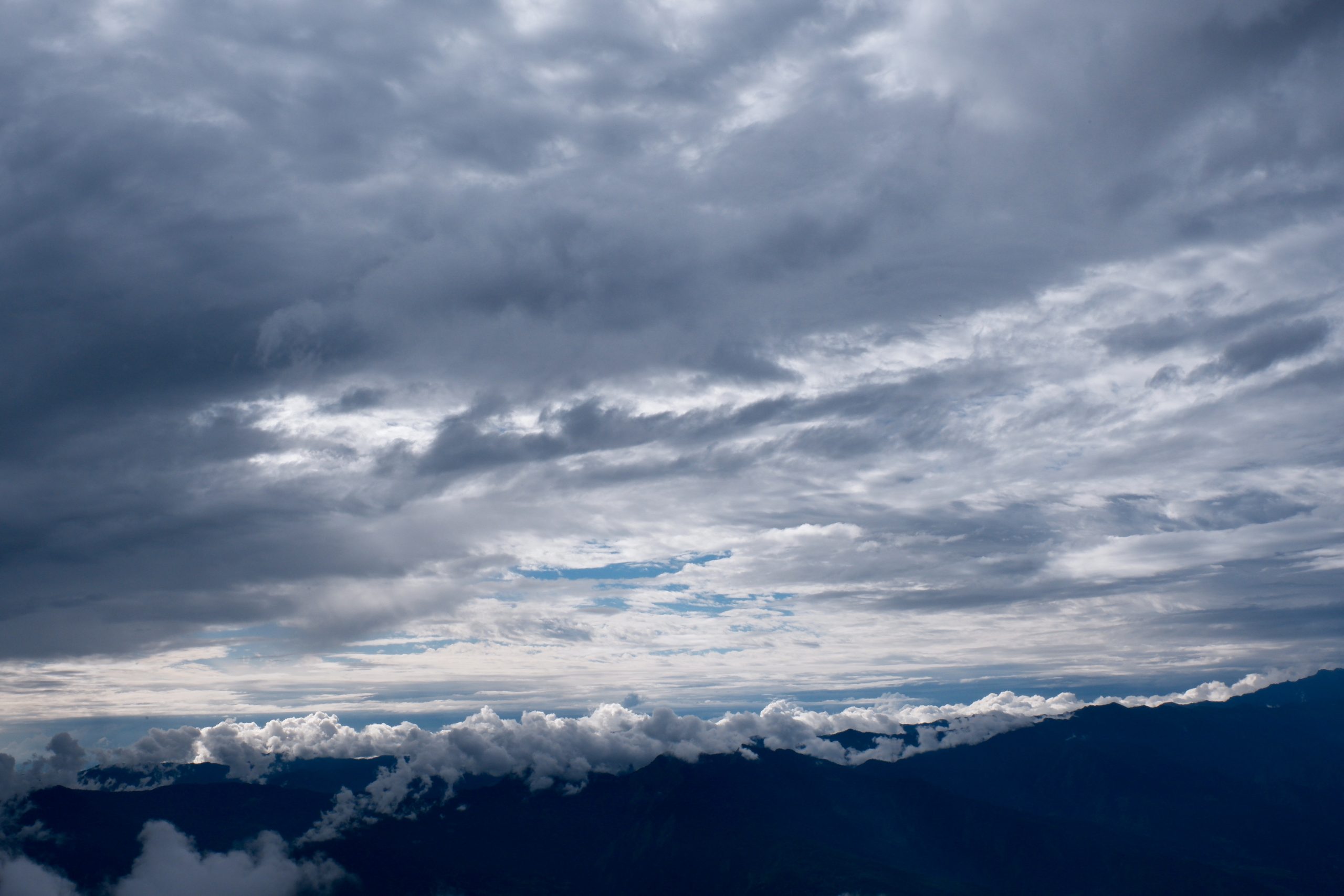