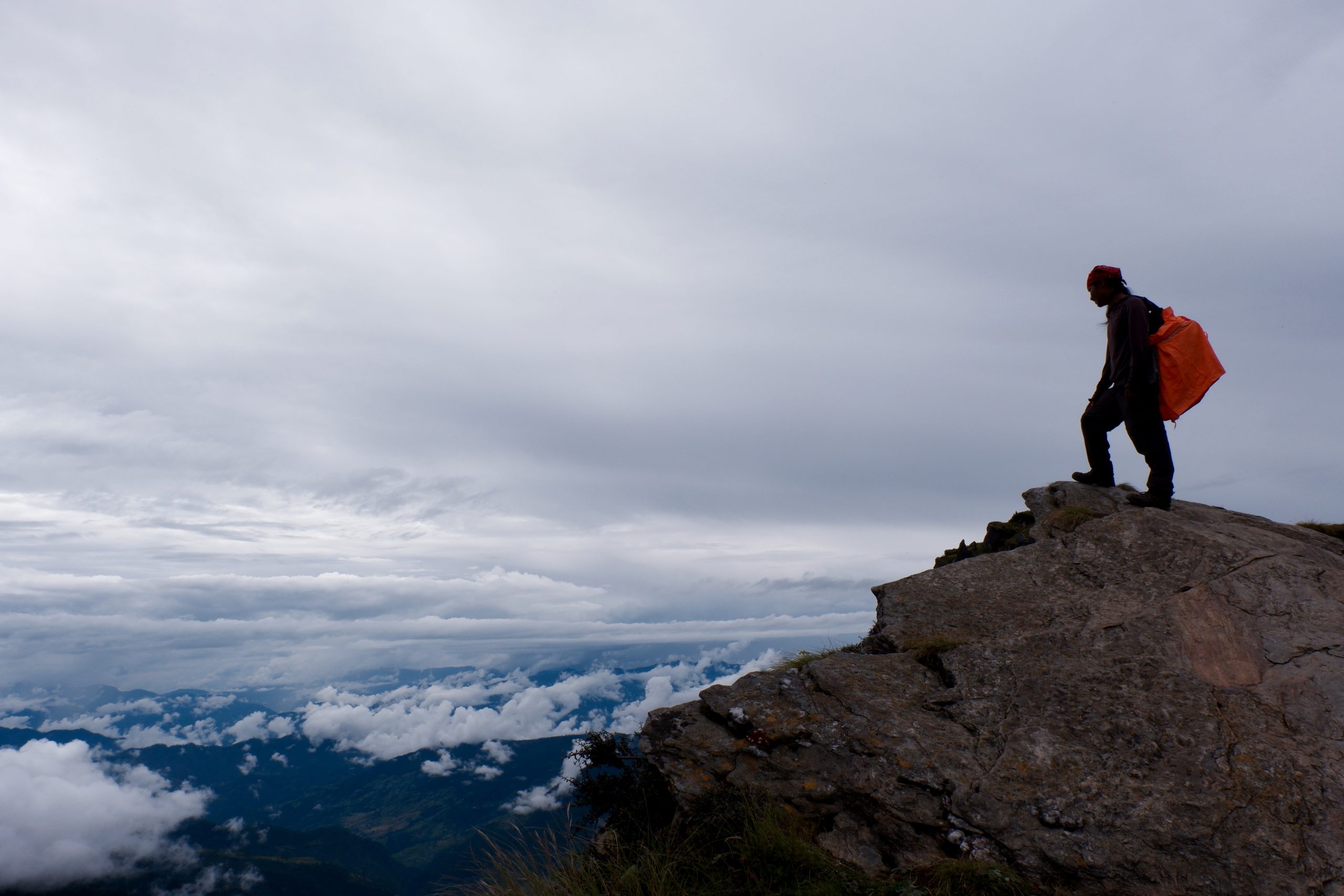 When you travel through India, you usually already know that you will often have to deal with loudness that you don’t like. Nocturnal dog barking concerts are one of them, loud Indians (no females) the other. That night we had both. The accommodation was extremely noisy and you could hear everything in all the rooms and in the one next door or one down the road it was highlife all night with discussions or other chatter. Other people would often knock on walls, it would get quieter – and then start again. At breakfast we encountered this bunch of exhausting men. Here is one of them: 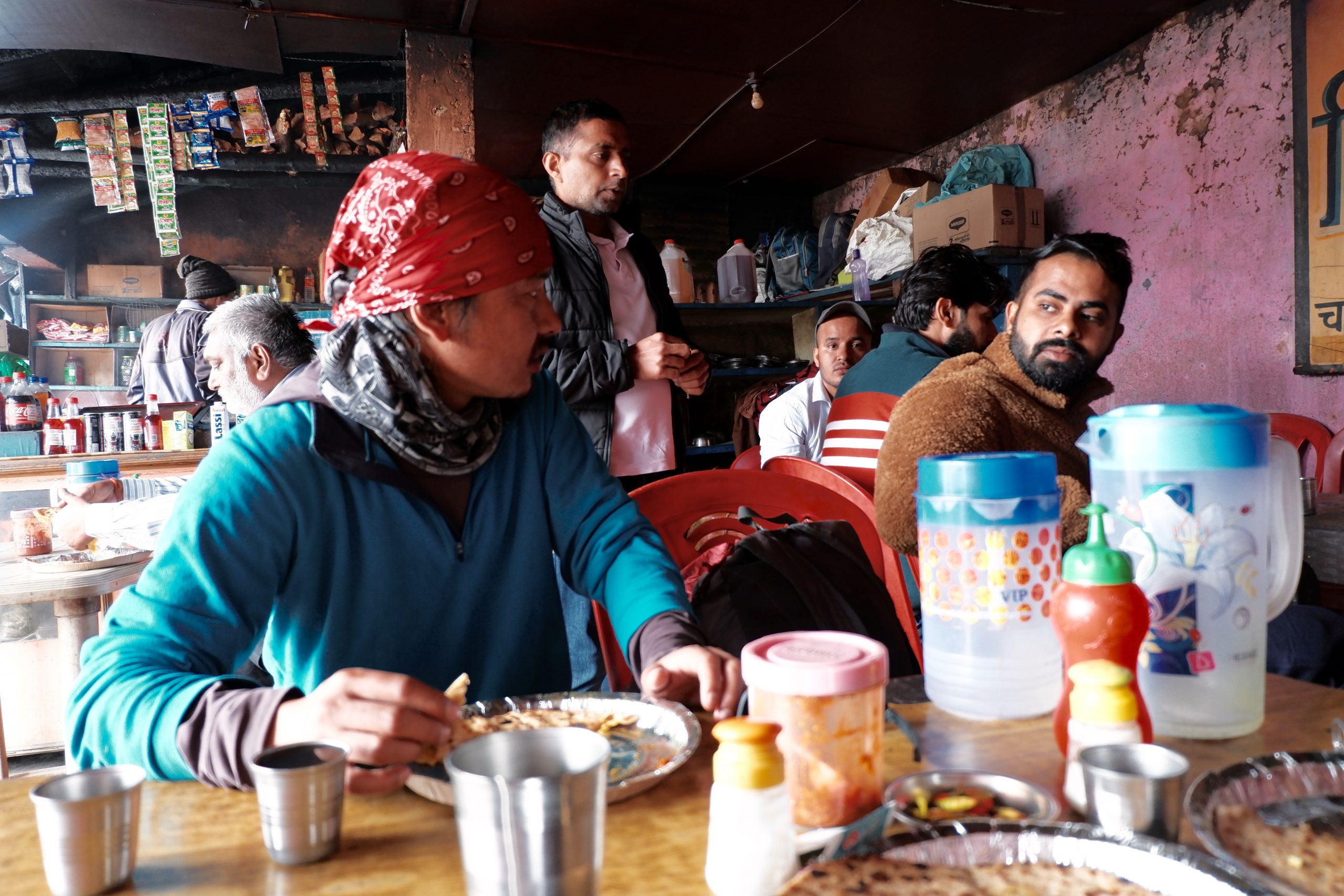 Nevertheless, I had slept quite well. The weather was modest, i.e. cloudy. Chopta is the starting point for the approx. 4-5 km climb to Tungnath Temple. It doesn’t look so pretty there, especially not in gloomy weather. It is at over 2,800 m and 800 metres of altitude waited for us. 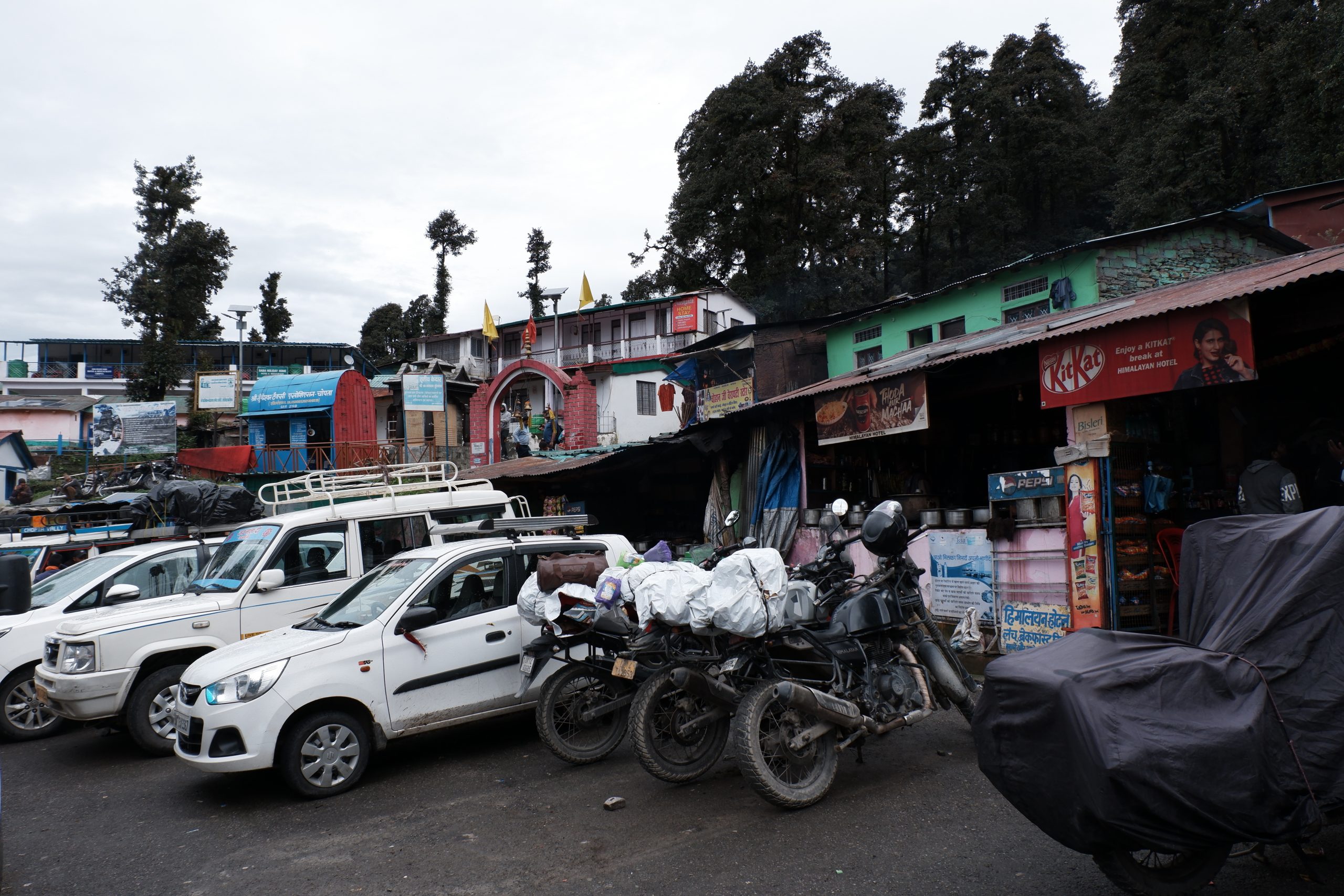 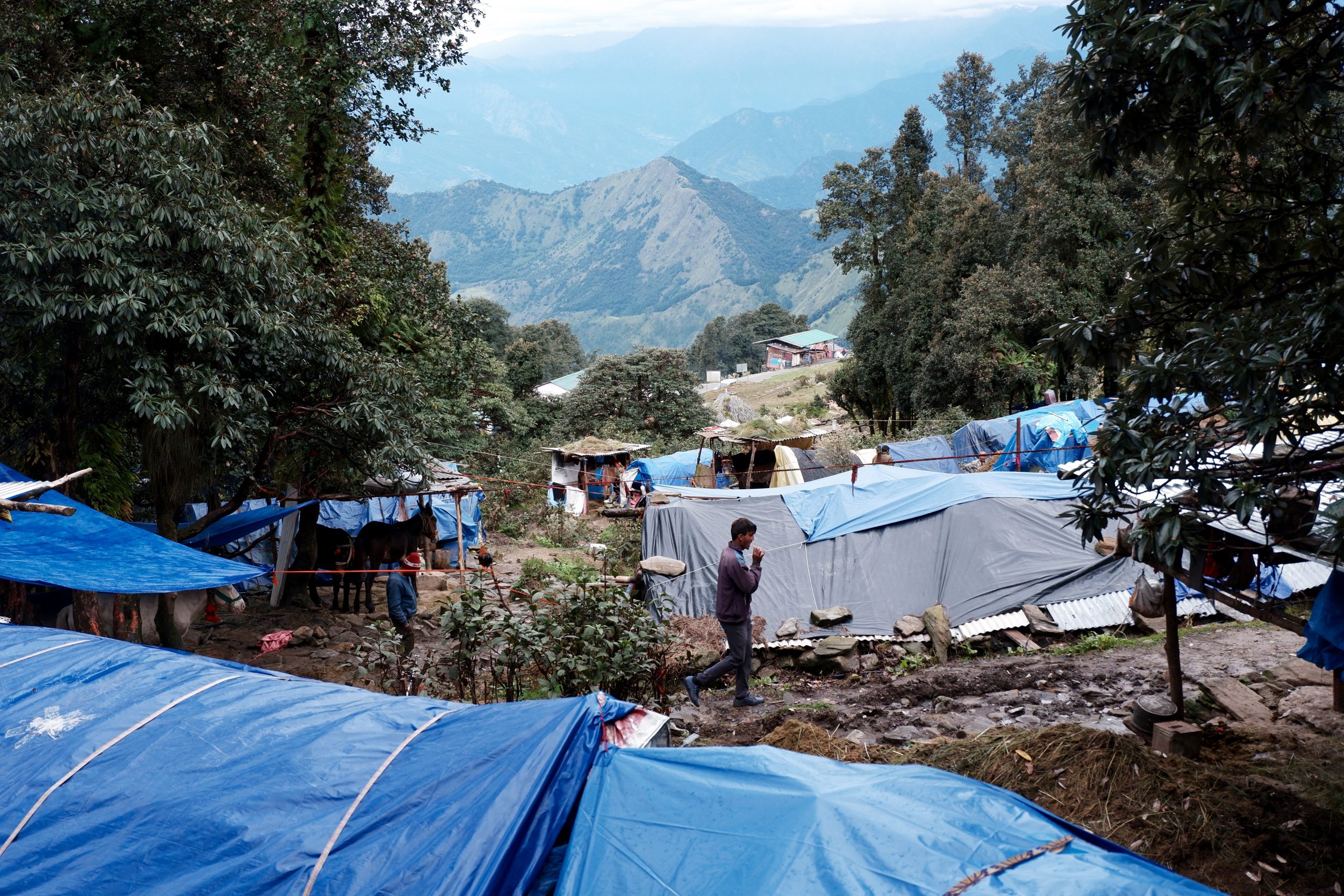 Tungnath is the highest temple of the 5 Shiva temples that make up the Panch Kedar. This pilgrimage route is quite popular and so one definitely does not walk the tour alone. Some Indians are not so good on foot and can be carried by horses. Quite some do. 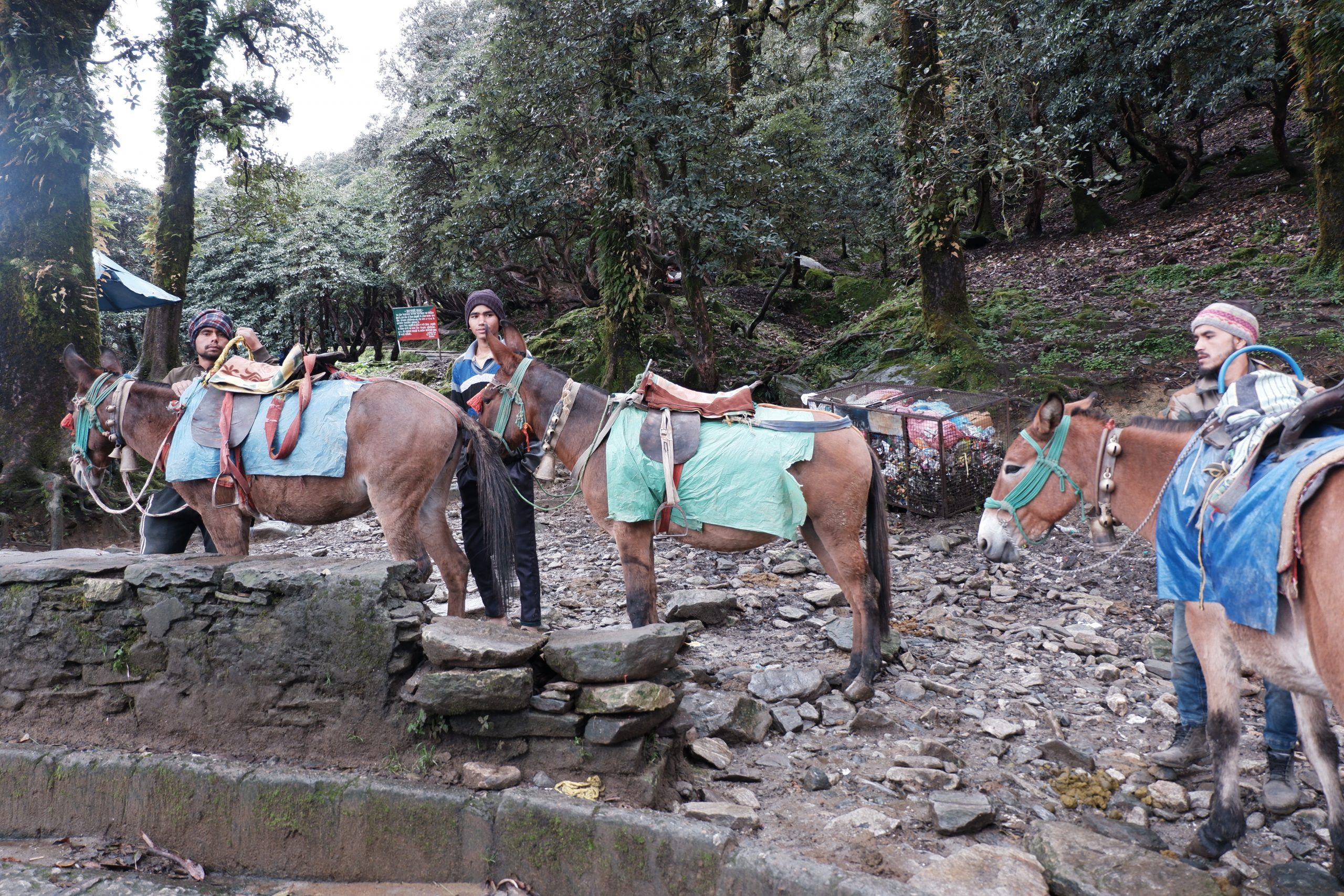 It goes along a stone path that first leads through the forest. You can spot pretty birds there, for example. 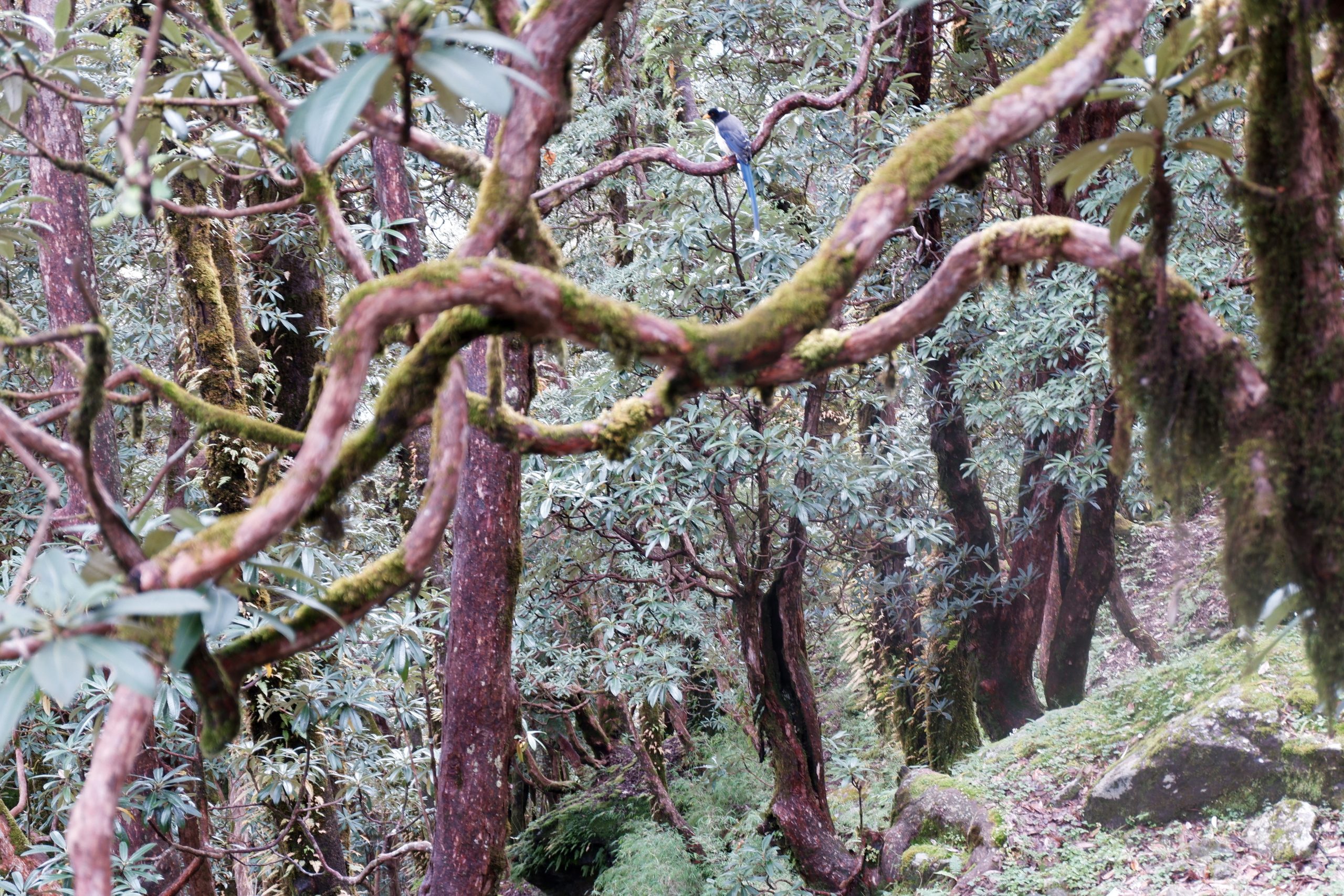 Then the terrain opens up and makes way for high meadows. Very beautiful. You meet lots of people and most of them radiate a lot of joy and smile at you. It’s easy to get into conversation and at least one always want to know where one comes from. And in fact, many of them come from far away. 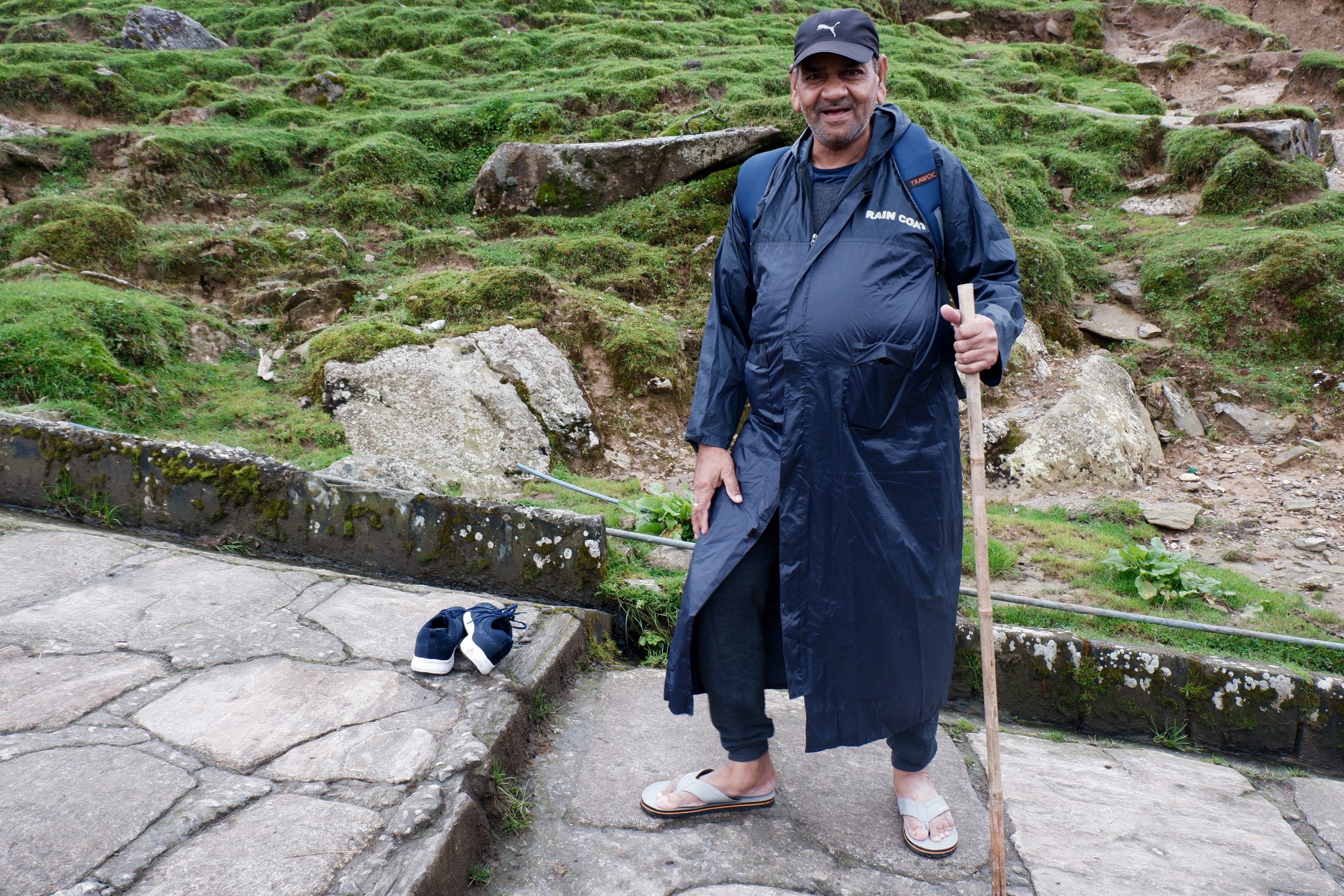 Western faces are very rare here – on this day we only met one Russian tour group. 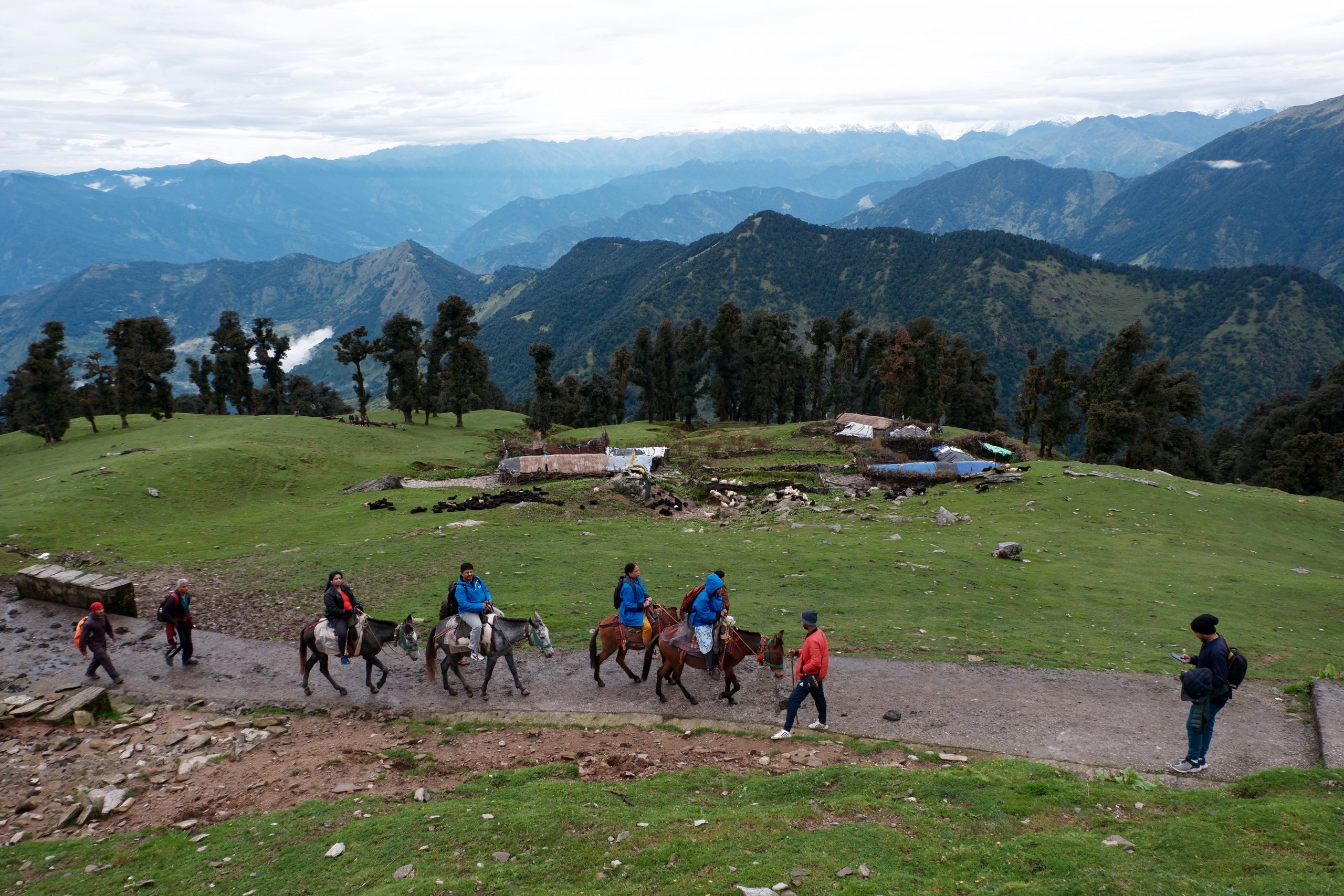 But besides riding, there is another way to get up if that is too difficult. This one seems strange to us somehow. You can be carried by people. You sit in a kind of simple palanquin that is carried by four men. 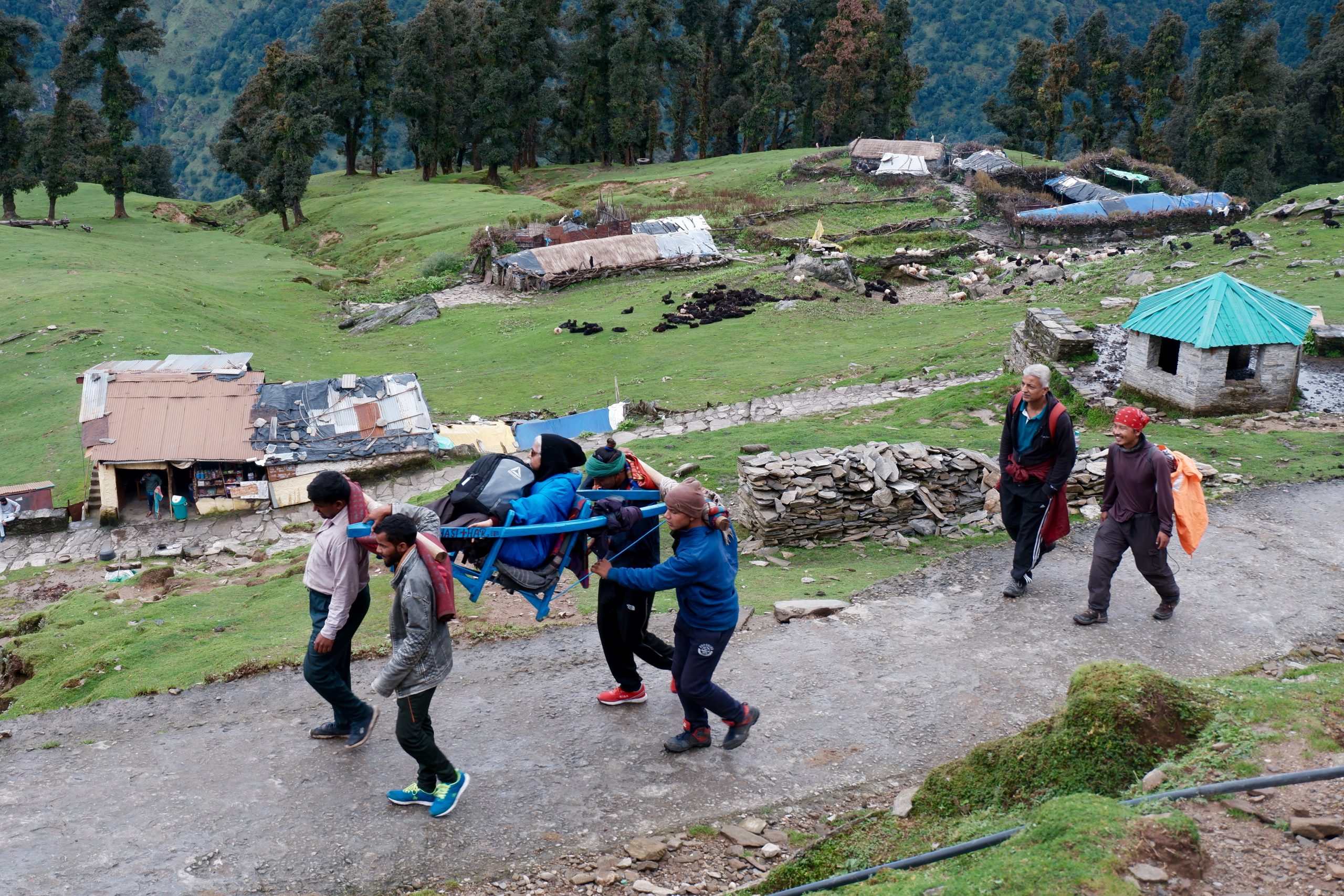 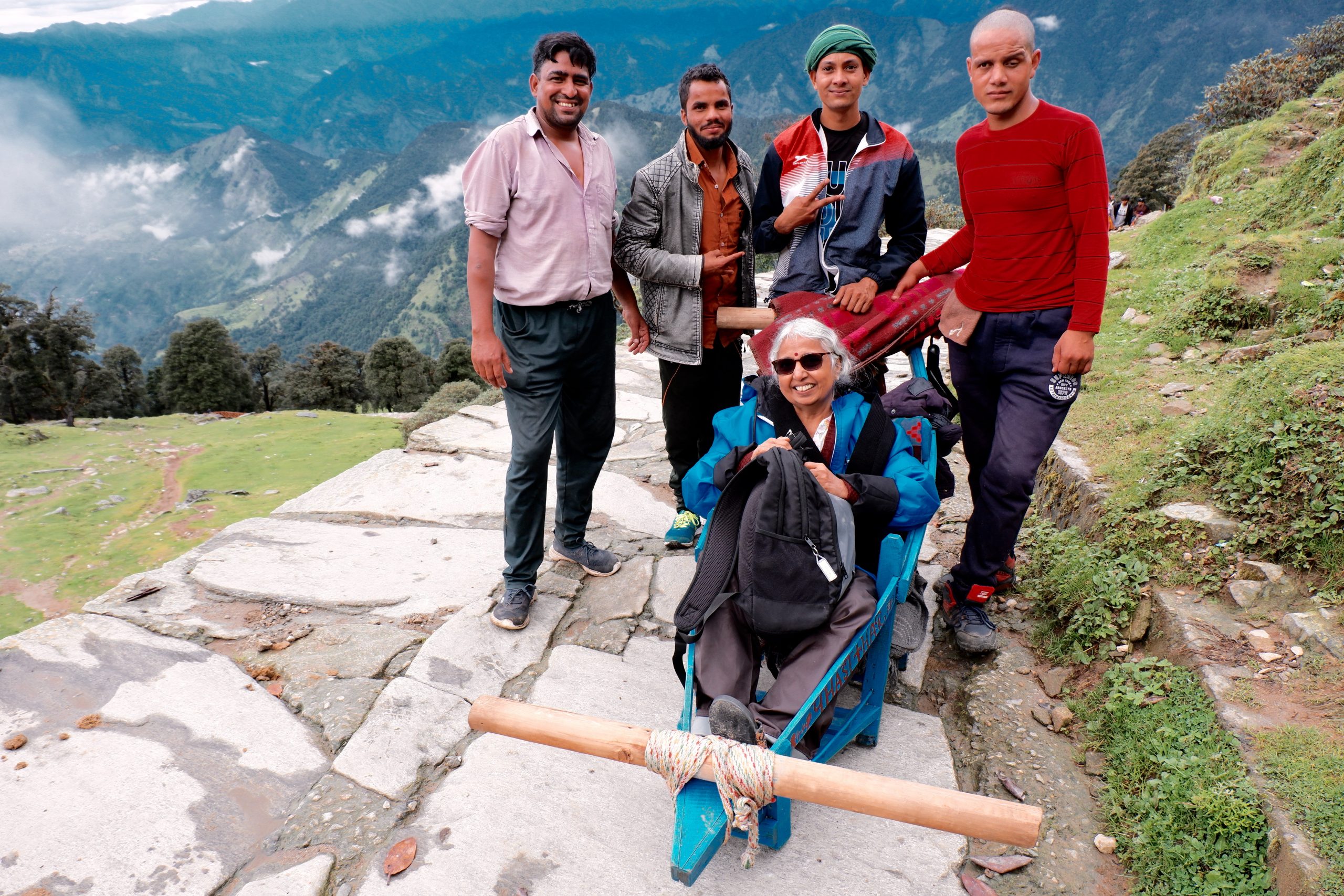 This woman was in very good spirits in her palanquin. She had a small portable radio with her, playing uplifting music. During a break, we got to talking a bit. She admired my fitness. Hahaha. In India, people usually get white hair later and like to dye it. I think I was often estimated to be older. 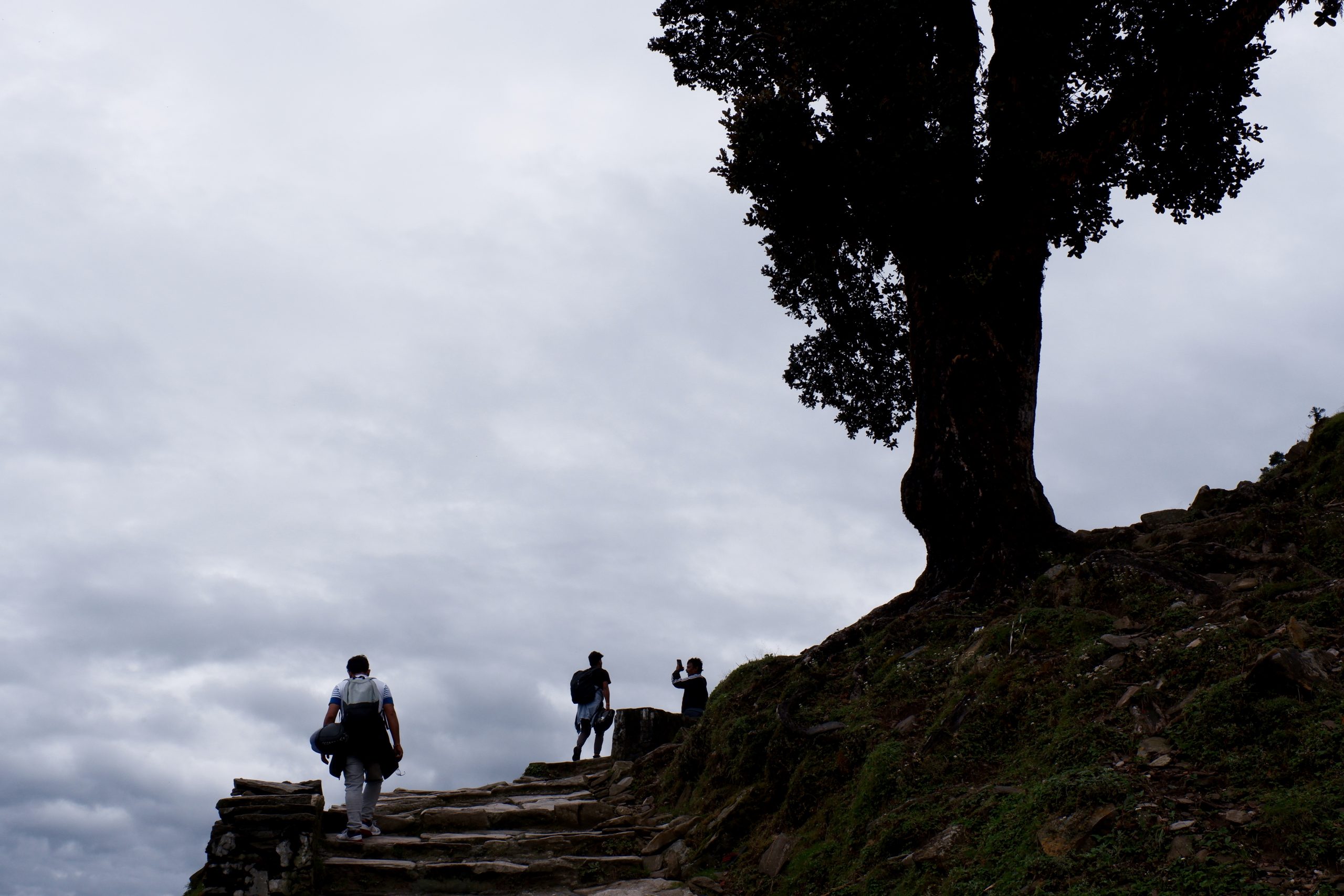 Small dhabas had set up along the way to provide people with tea and snacks. People also liked to make contacts here. 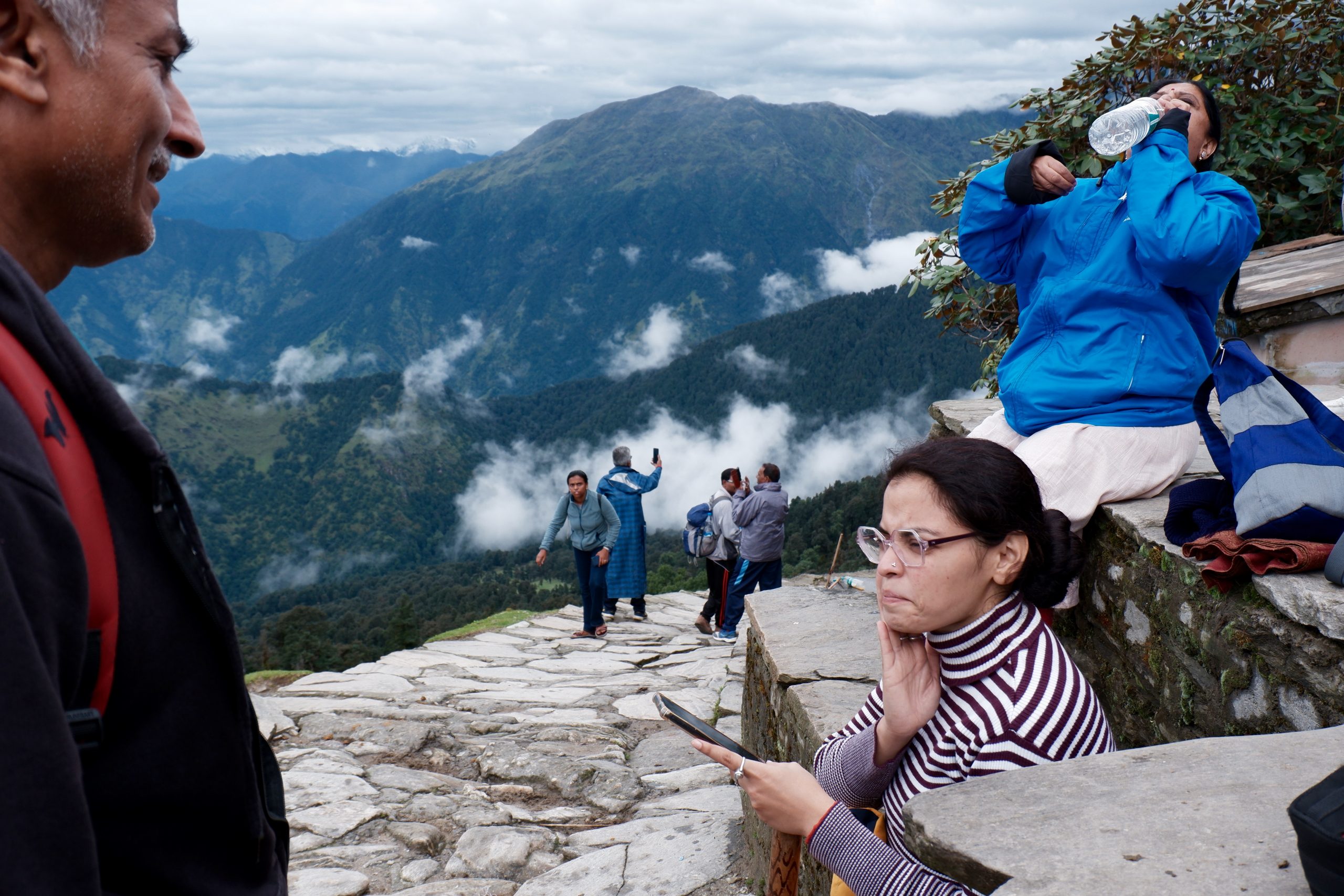 in front of Dhaba 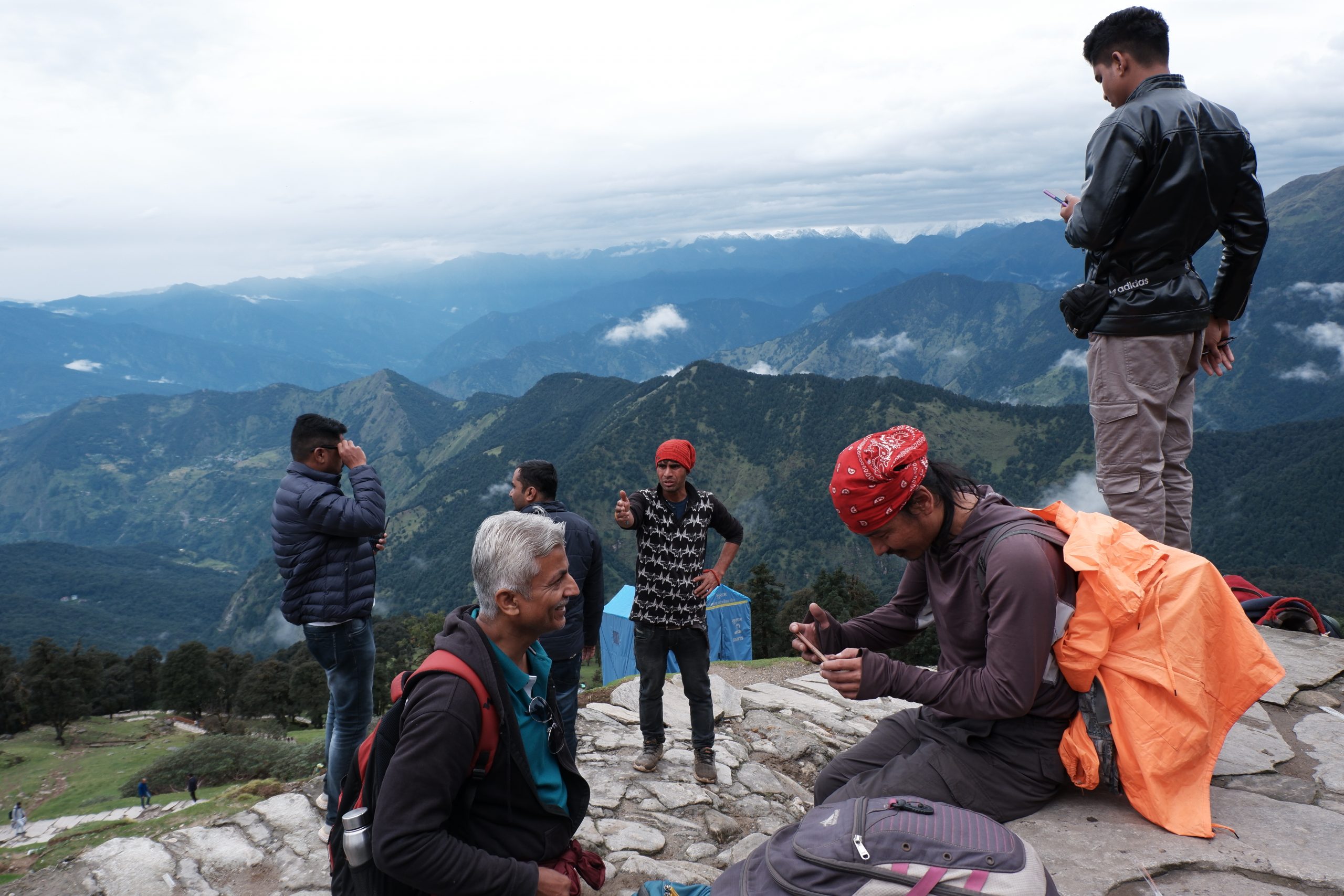 Soon the temple was in sight: 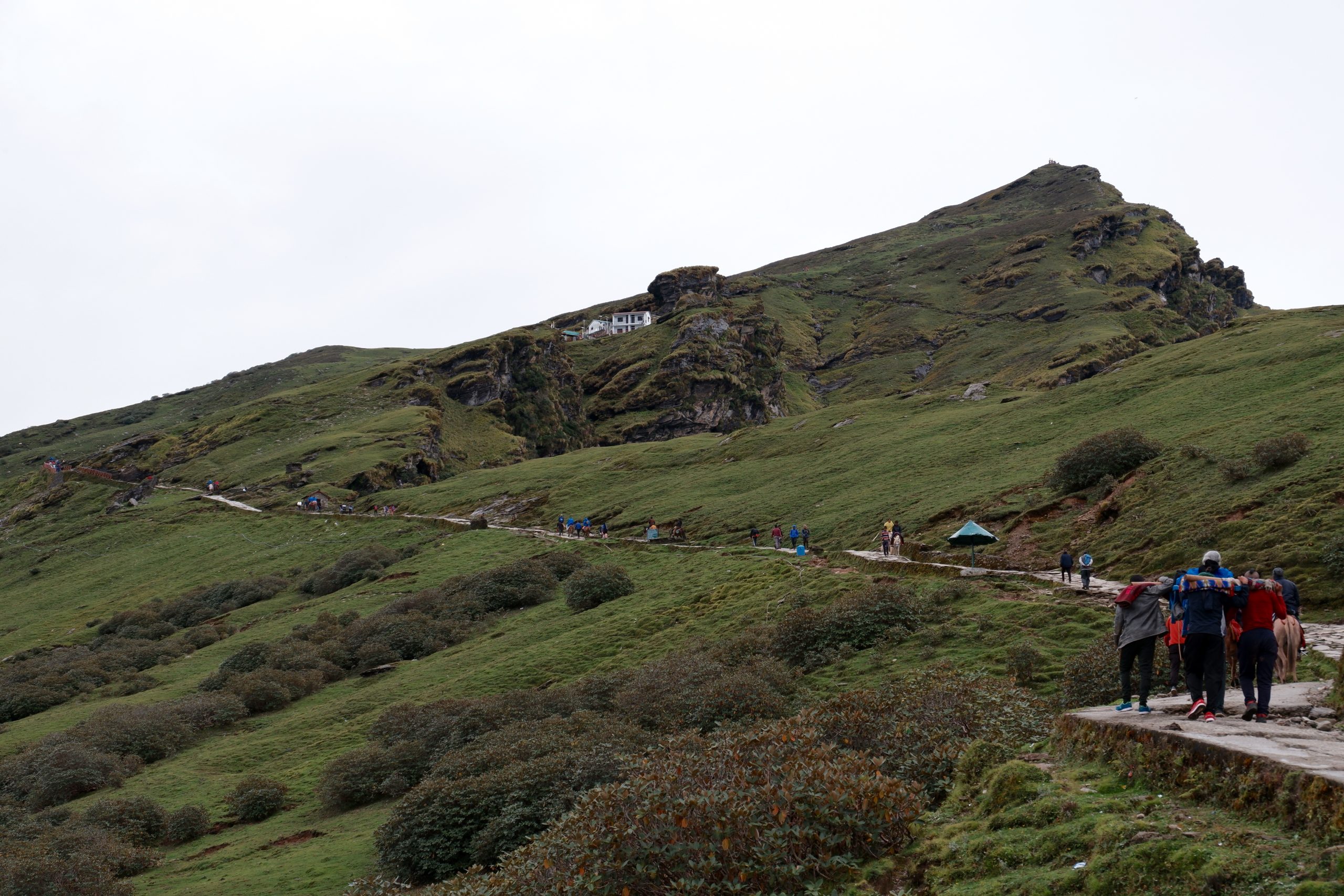 Temple in the far

In the picture you can also see that there is another peak behind it, Chandrashila Peak. We also wanted to climb it and preferred it to the temple. It was fantastic there! 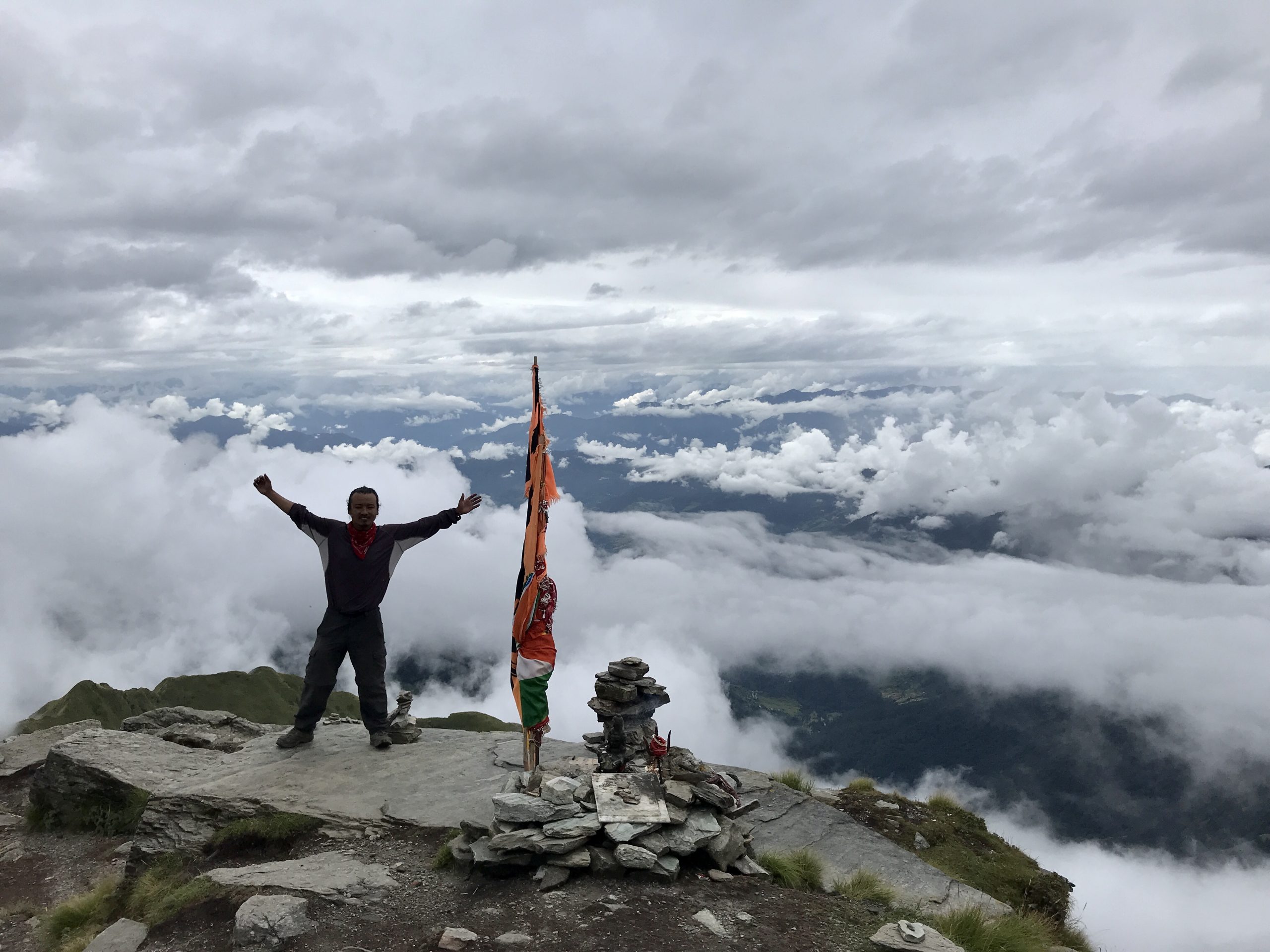 We were here at 3,690 m and actually had a great panoramic view. However, there were always clouds in front, hiding the even higher mountains. Nevertheless, it was a great place to stay, which we did. But more about that and the temple visit in the next blog post!