Uttarakhand – Memories before the trip 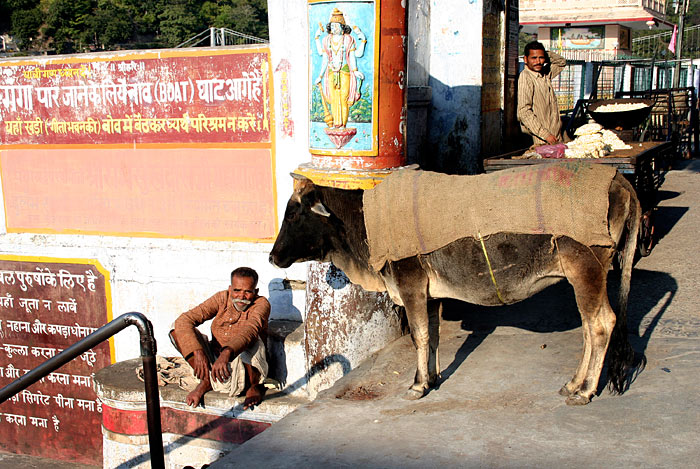 In 3 weeks I should have landed in Delhi and started a trip to Uttarakhand. I was there once in 1995. Before the internet, I did not write mails or blog posts but diary letters to friends, which I copied after the trip. They now fill folders. And today I thought I should have a look at what I wrote in 1995. I made slides back then, I don’t feel like looking for them now and scanning them. So that it’s not completely pictureless, two photos from the area from 2005 – I was only in the area for a very short time in winter.

But here are some extracts from my diary letter from 1995:

(…) yesterday I was in a nasty city, today I am in a nasty place, haven’t seen a western face since Nainital, have a headache (the 1st time) and realise that I don’t like India.
I got up at 4:15 as the bus was supposed to leave at 5:00. When I wanted to get on, I first woke up the snoring bus crew – it didn’t start until 6:00. After only 5 minutes, the boy opposite me threw up and continued to do so until he got off again. The route took terrible bends through the mountains and people were constantly throwing up from the buses. (…)
Sometime after 11:00 the bus arrived at its final stop, it was supposed to be another 90 km to the next bigger village and then another 85 km to Joshimat, where I really want to go first. Unfortunately, I didn’t make it there. First I took a kind of shared taxi and found out that not only Himachal Pradesh had been hit by landslides, but also Uttar Pradesh. Once I had to walk again (note: over a landslide), then there was a broken bus, i.e. it did not start by turning the key, but only by rolling. Due to this adversity the journey took quite a long time + I was about 16:00 in Karnangprayat and don’t want to go on as I was done + headache + annoyed. (…)

Yesterday I forgot to complain about the lack of western tourists. I haven’t really spoken to anyone since Delhi, which is mainly due to the lack of tourists. Somehow there are none here, not in Almora and not in Karnangprayat either. I have quite a longing for conversation, especially when the rest (landscape + people) doesn’t knock my socks off. But today the tide has turned a bit. Still no tourists, but I’m thrilled by the landscape and the hotel is also very satisfactory.
So I got up at 5:00 – the. Bus left at 6:00 – but at least it drove. Many bends, many stops + I got another attack of annoyance from 2 sheepherders (?) who were shouting at each other in the bus (one in front of me, one next to me) at an insane volume + talking (always sounded like irritated discussion) + chain smoking. One of them was particularly unpleasant. (…)
But then the landscape became more and more spectacular (extremely deep gorge + high mountains), the guys talked less – shortly before 11:00 (almost 5 hours for 85 km) I was in Joshimat, beautifully situated at 1,800 m with insanely great views of even higher mountains, partly with snow. But, I liked it + I was also a bit relieved. (…) 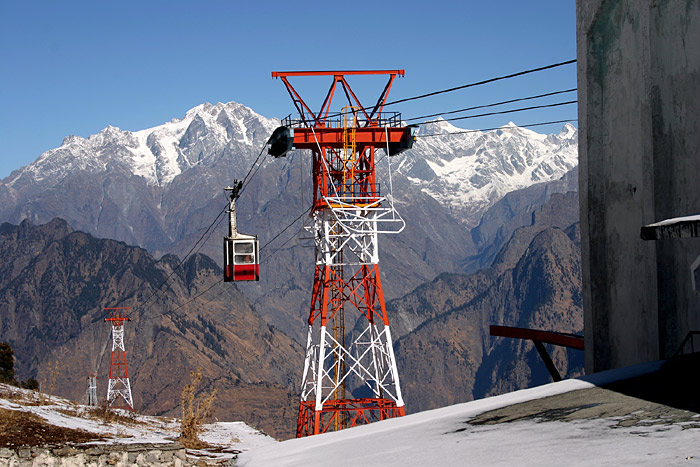 (I then had nice experiences in Joshimath without other tourists, but health problems. I took malaria tablets – don’t ask me why. I suspect that was the cause).

24.10.1995
(…) Slowly packed things and at 11:30 a bus left for Badrinath. This is a place at the end of the road at an altitude of 3,100 m where there is an important Hindu temple. The region where I am is called Gharwal and is not only characterised by these very high mountains, but also by very important Hindu temples to which a lot of Indians make pilgrimages. The 4 most important temples are each located at 4 ends of the road at a high altitude. There are many Indians on the road and therefore also many accommodations (…).

The mountains became more and more barren and enormous and I was amazed. Badrinath, on the other hand, is extremely strange. It seems so strangely barrack-like, very lonely and very cold. There was also a nasty wind blowing through the place, so I almost shivered right away. But I’m thrilled by the landscape. Strange hotel, but no matter. First I had lunch, then I went to the temple. My first Hindu temple and it disturbed me a bit. I didn’t get it at all, found the atmosphere very strange. I don’t quite understand the people either, there are these washed-up men with greasy long hair, relatively little clothing and wandering around with a tin bucket. There are swamis, sadhus, don’t know if they are one of them. In any case, they are probably on the path to enlightenment, but unlike Buddhist monks, they always seem to me to be completely insane instead of admirable. And I didn’t get rid of whether they begged me or not.
When I entered the temple, I got red paint smeared between my eyebrows for money + 2 grains of rice slapped on top. The Hindus do this all the time. It was teeming with quite a few people, there were some strange figures in small rooms, but what the people were doing there I couldn’t see through. Strangely strange. Unfortunately photography is forbidden, so I can’t show you what it looked like there. I walked out completely confused (…).
In principle, however, I would like to come here again with a companion and hike, the landscape is just great.

(During the night I did not feel well with fever, headache, vomiting, freezing etc. The next morning I took a bus towards Rishikesh).

25.10.1995
(…) On the bus I made another Indian friend for life, who I don’t really want to be friends with. He tells me all sorts of strange things in extremely difficult-to-understand English. I usually mumble in agreement. He is 66 and thinks a lot about death. (…) Apart from that, there’s nothing to report from the bus ride except that I didn’t take off my bobble hat until 12:30.

(And then the next day I was in Rishikesh, I didn’t really like it either, I travelled to the Taj Mahal, I liked that a lot, and then to Darjeeling and there everything was good again). 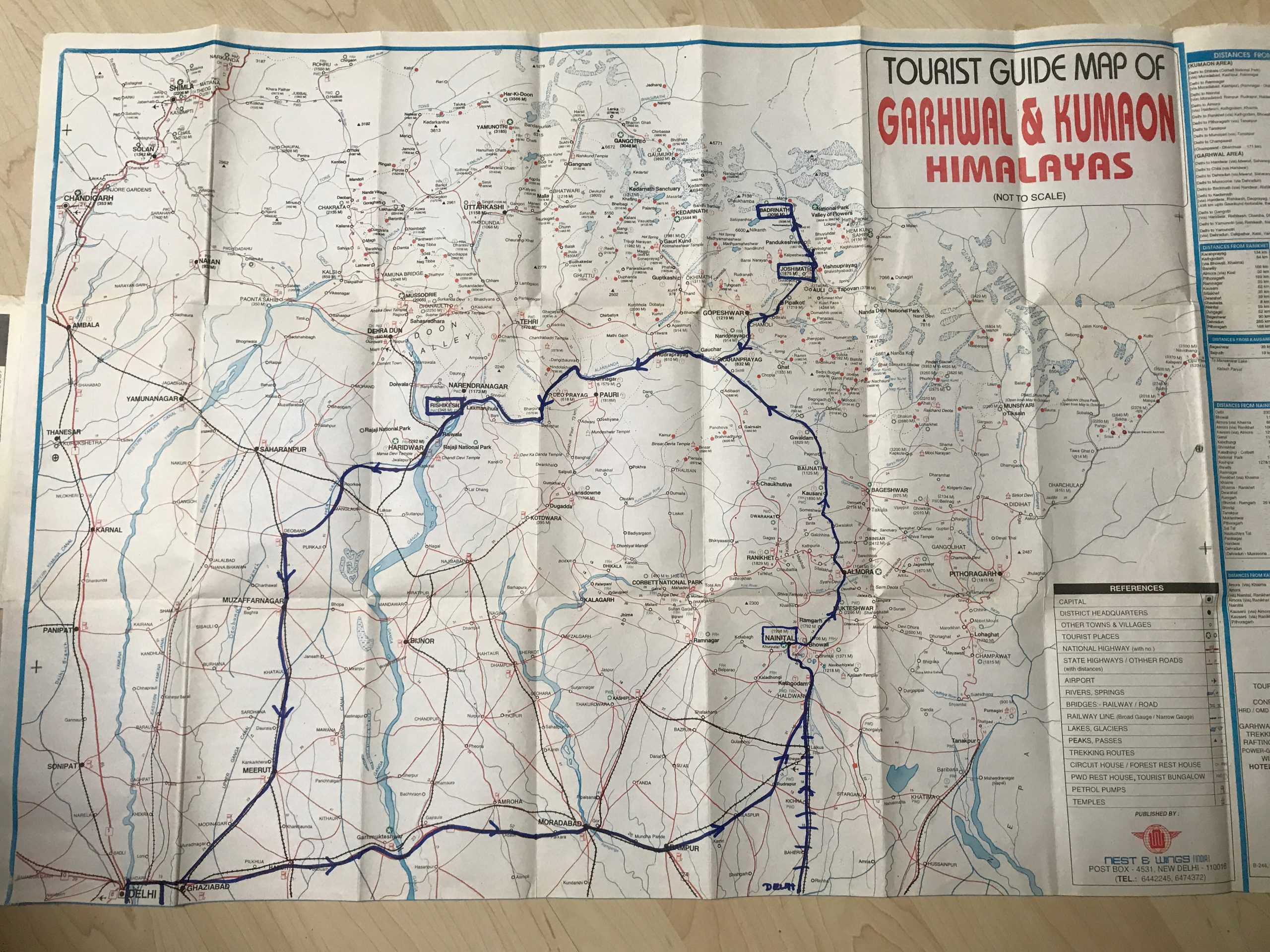 I had to laugh as I was then and suspect that I will experience everything differently this time. At least my relationship to India has changed, I tend to run away from western tourists and Hinduism doesn’t confuse me as much anymore. I wrote back then that I would like to travel to this region with someone else. That’s what I’m doing now in September.