Armenia has mountains – “only” the small Caucasus, but that is definitely enough to make me want to go hiking. I did a lot of research beforehand, but was a bit overwhelmed by the abundance of possibilities. There are several organisations, all NGOs, dedicated to mountain hiking in Armenia. Hiking trails have been and are being explored, prepared, marked and people informed about them. One of the NGOs is HikeArmenia, they have an office in Yerevan and I went there for advice. Very very nice!

We agreed that a two-day tour with an extra hike before and after in the Vayots Dzor province would be the best way to start. After that, let’s see. And so the next day I sat down in a minibus as about the 4th passenger and waited for over 1 hour until the car was full and we could then roar the 150 km to Vayk. On the way there was a view of Mount Ararat: 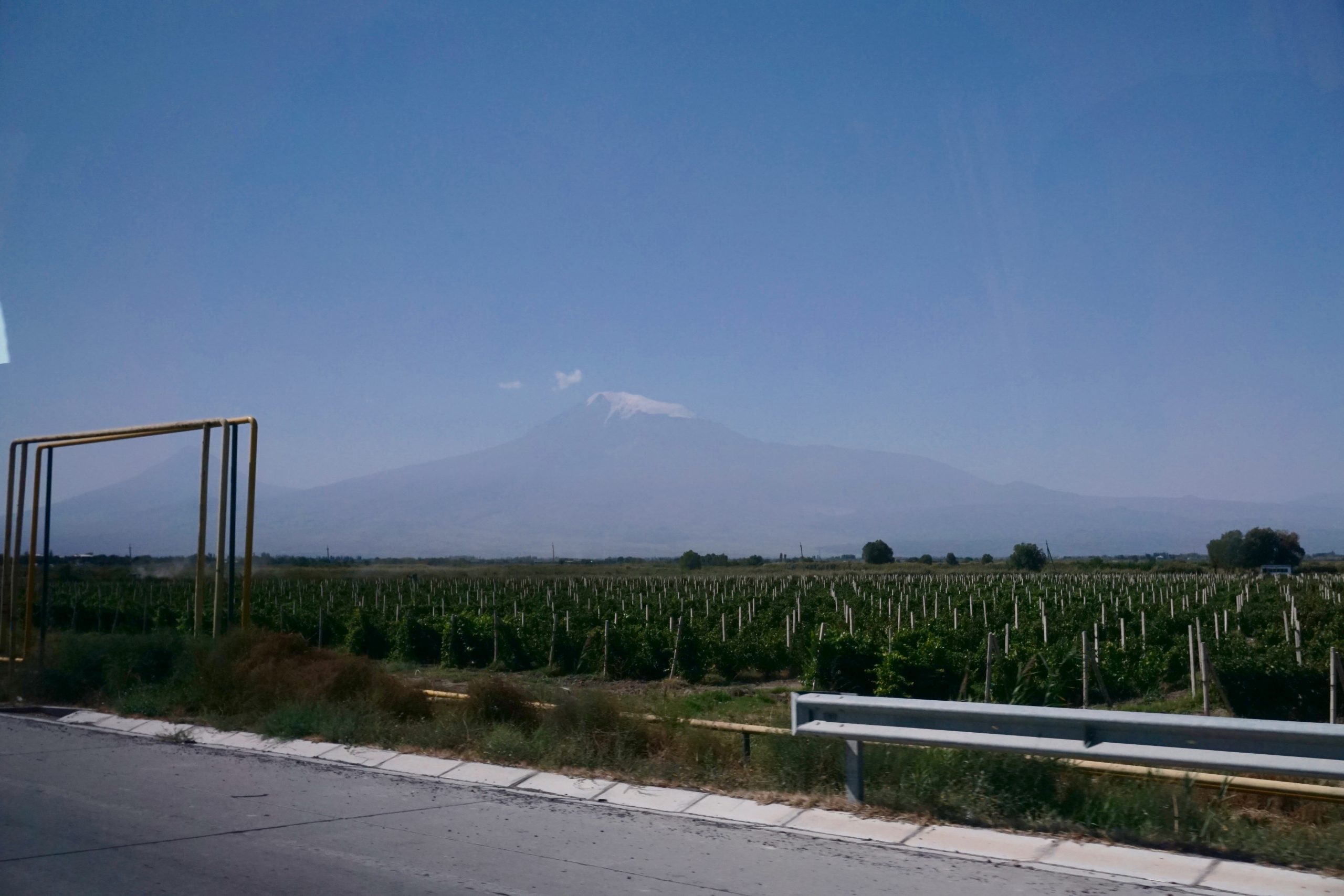 Ararat in the distance

I wanted to start in Old Martiros – there is no official accommodation there, but Hamlet and his wife Gohar, they had already accommodated the pathfinders. They picked me up in Vayk. They jumped out of a discarded army mini-van and grinned a little helplessly, as they don’t speak English. And then – oh wonder – Gohar dug out some German words! We chugged to their summer cottage, one of 5 still inhabited properties in Old Martiros. And there I got a table full of coffee treats. 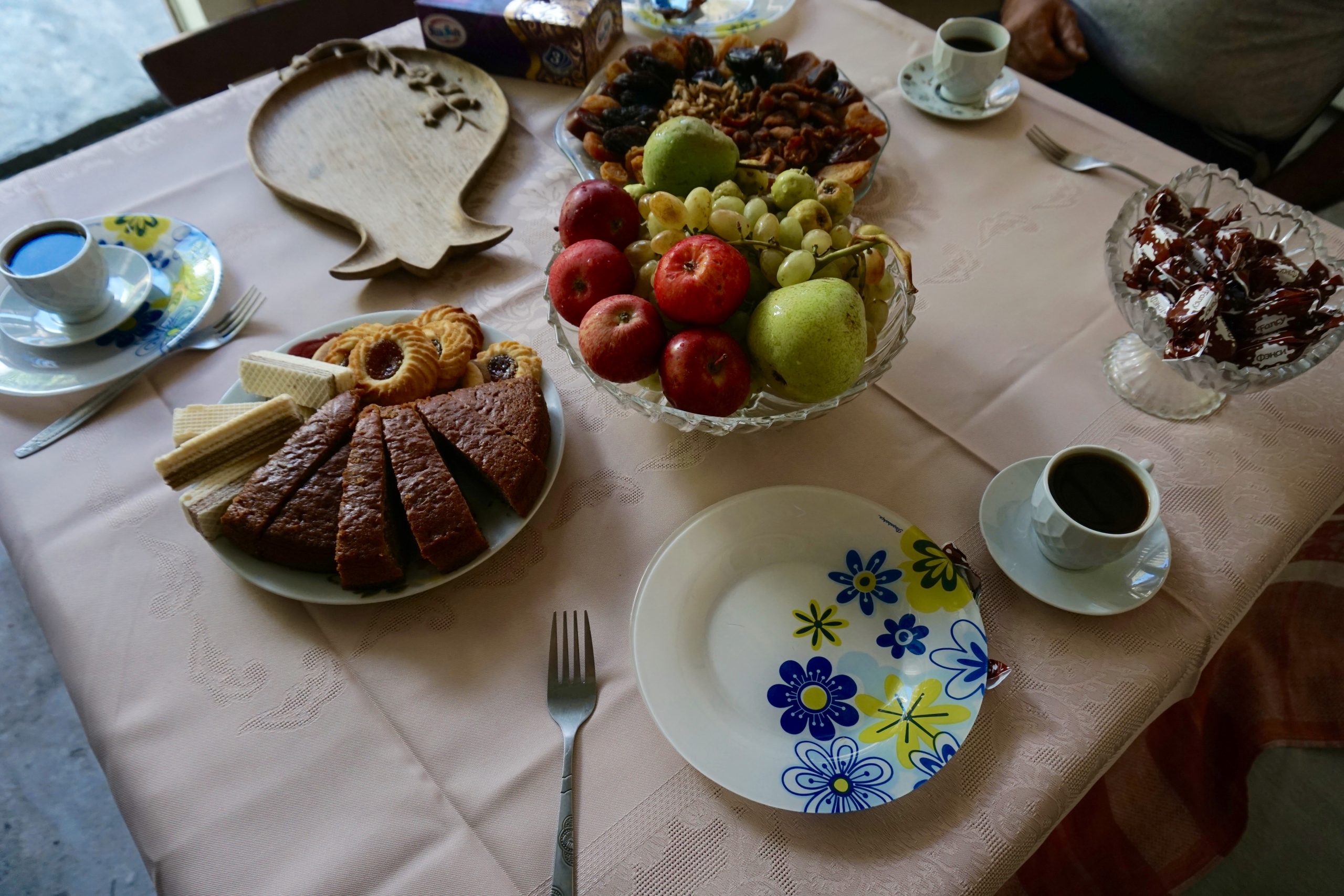 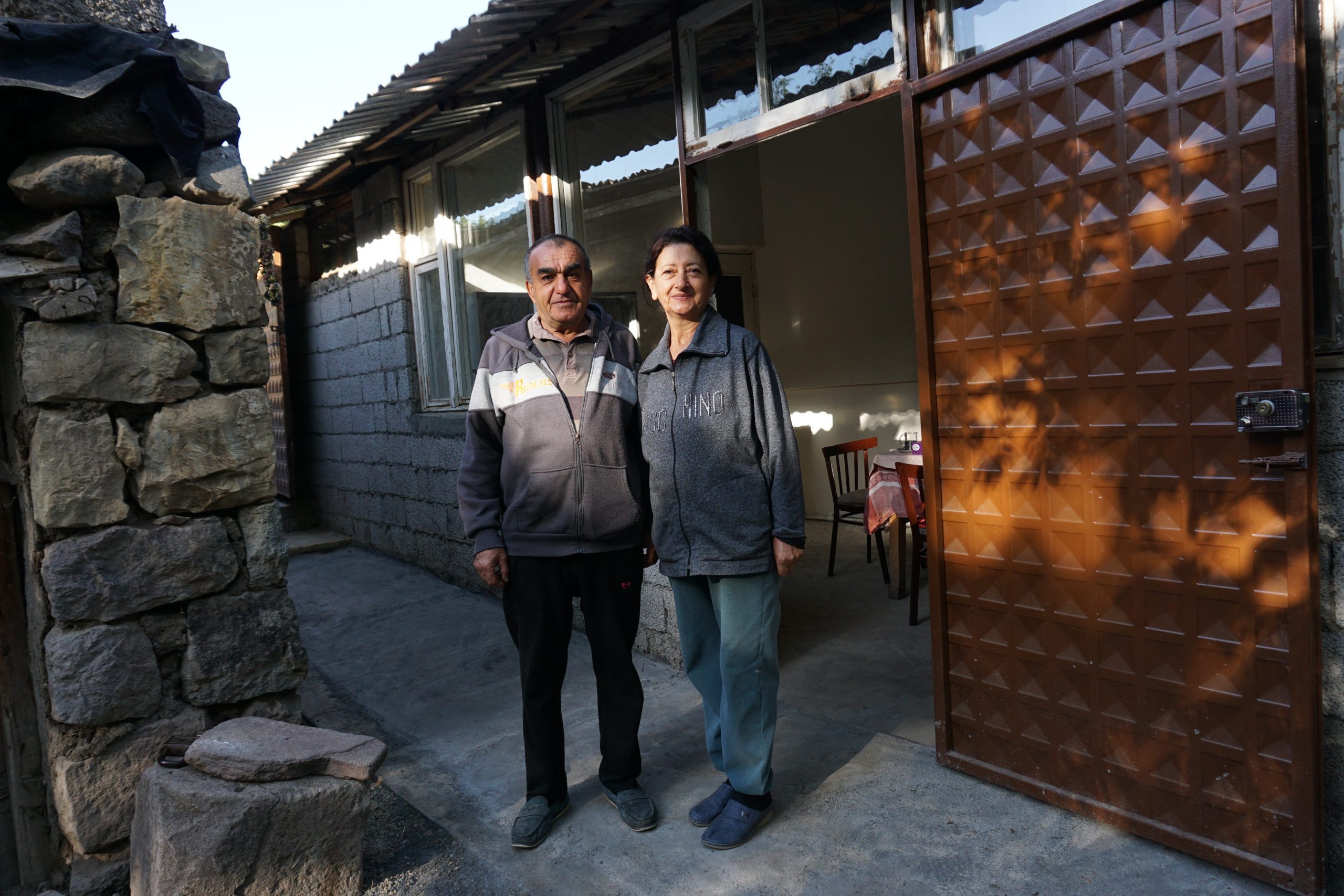 But they surprised me with another translation aid! The mobile phone was placed on the table and another voice spoke German with me: daughter Liana, who had studied journalism in Germany, among other things. I met her later in real life: a great woman with very loving parents. Family = travelling luck

But then I scuffled my feet or rather jumped up to the Old Martiros Trail, a 6.5 km circular path. It led me first to the village church: 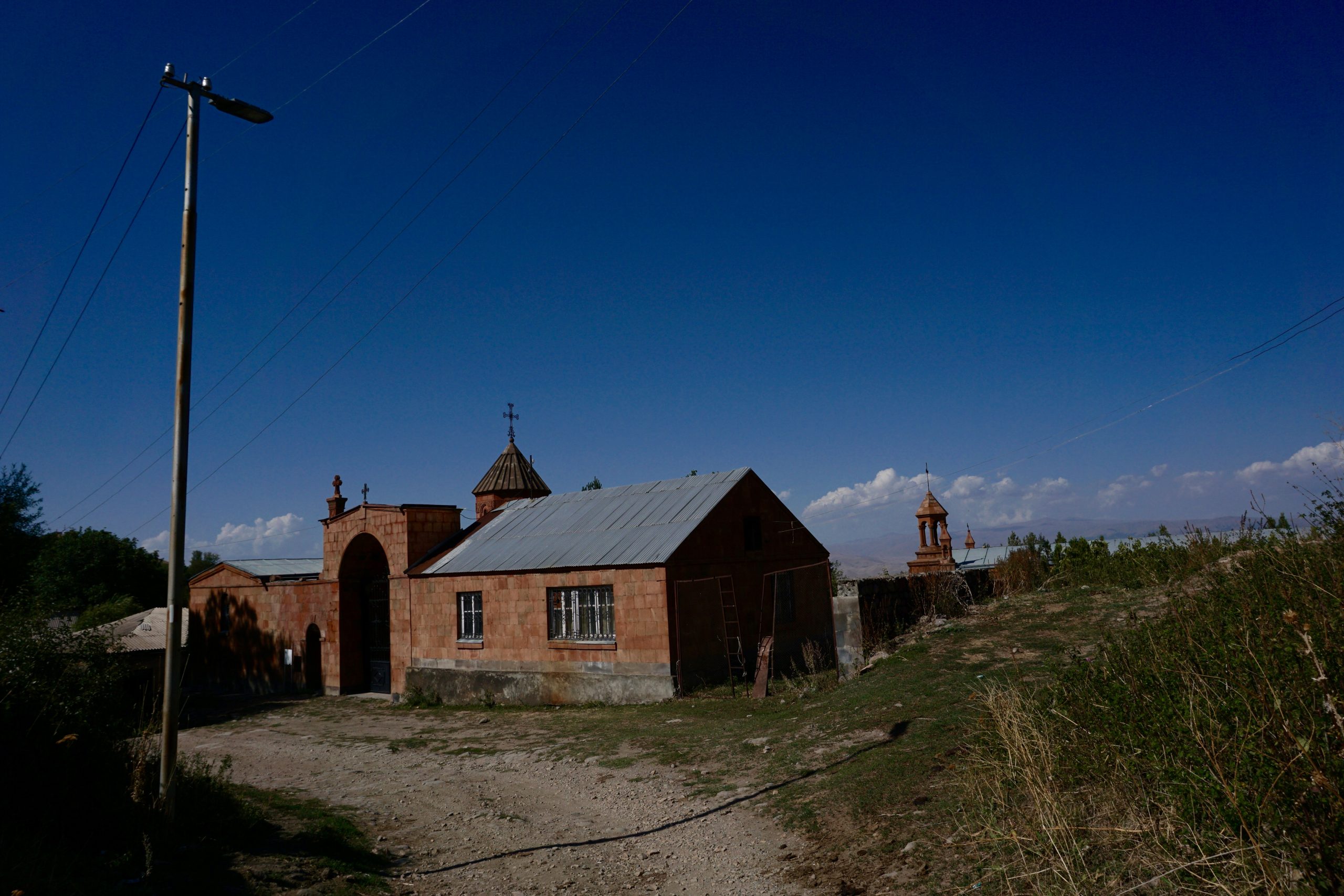 There was a lot of impressive stuff to look at, e.g. the door alone 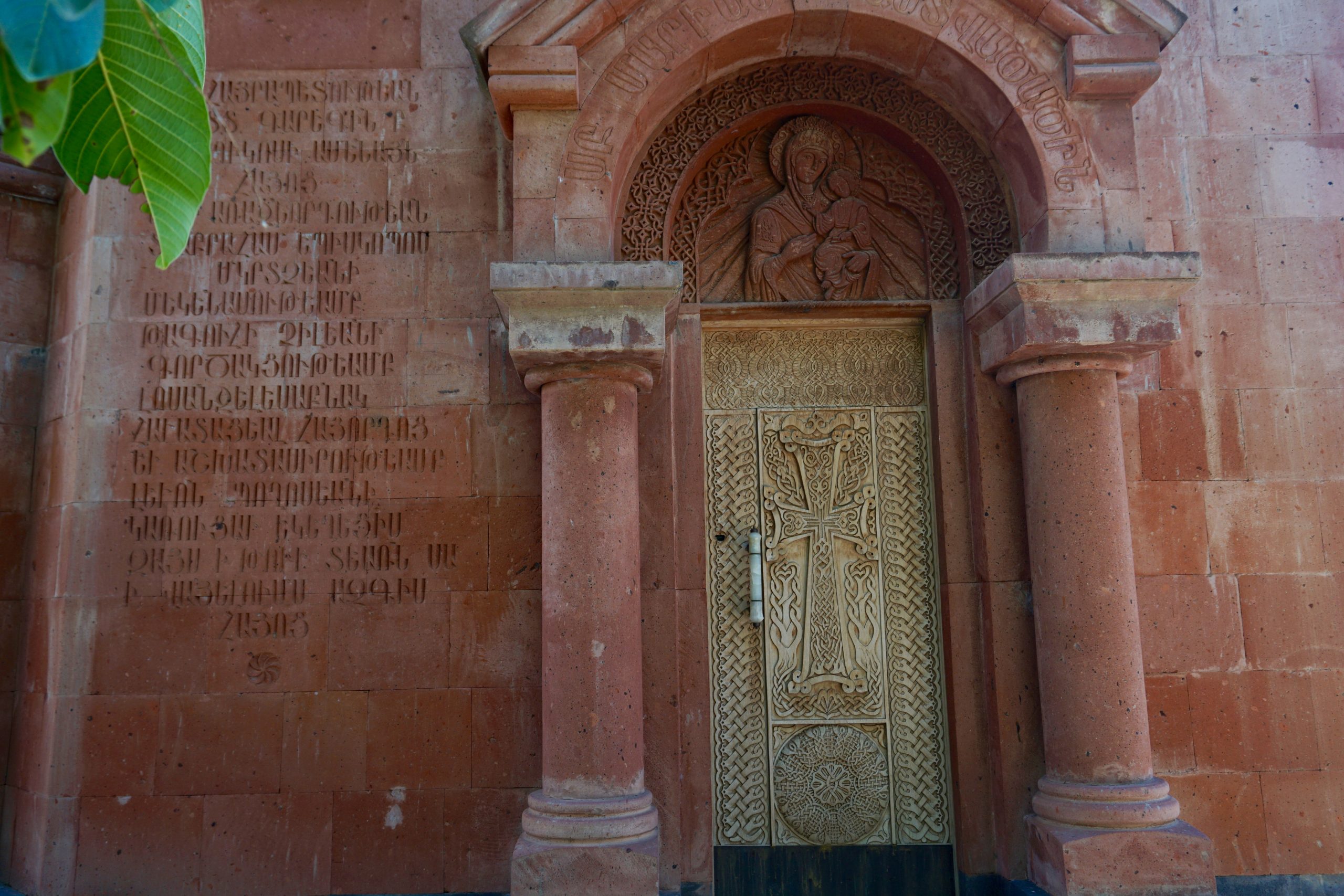 A woman had already scurried into the church before me, or unlocked it so that I could look at it. The highlight was a reclining holy figure. The woman rubbed her palm over it and then over my back. Several times. There was something very affectionate about it = travelling luck 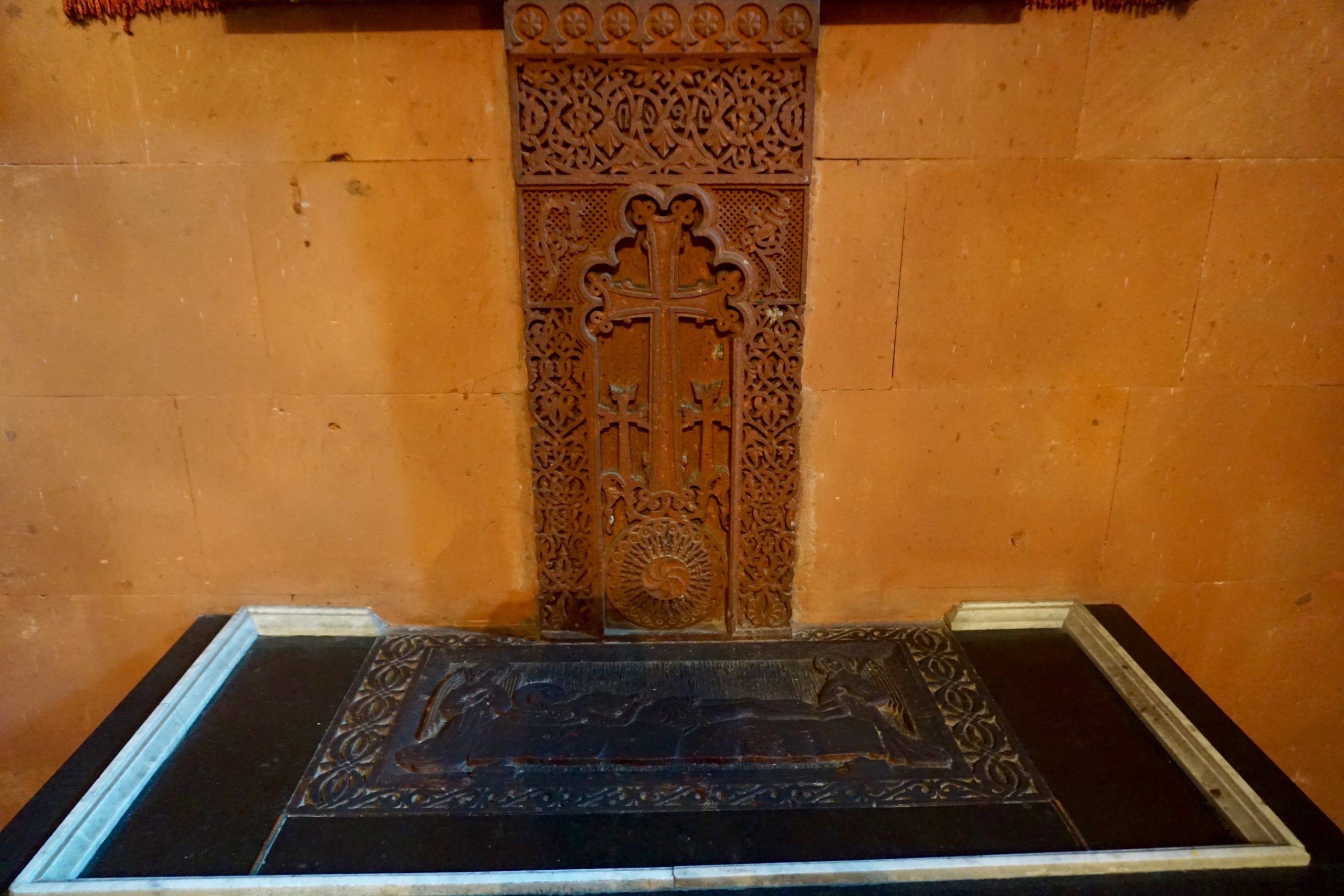 (Those who know me know that I’m actually quite allergic to Christian stuff, but I actually found this beautiful).

But then I hurried on – and got tangled up at first, because I hadn’t quite adjusted to the signposts yet. 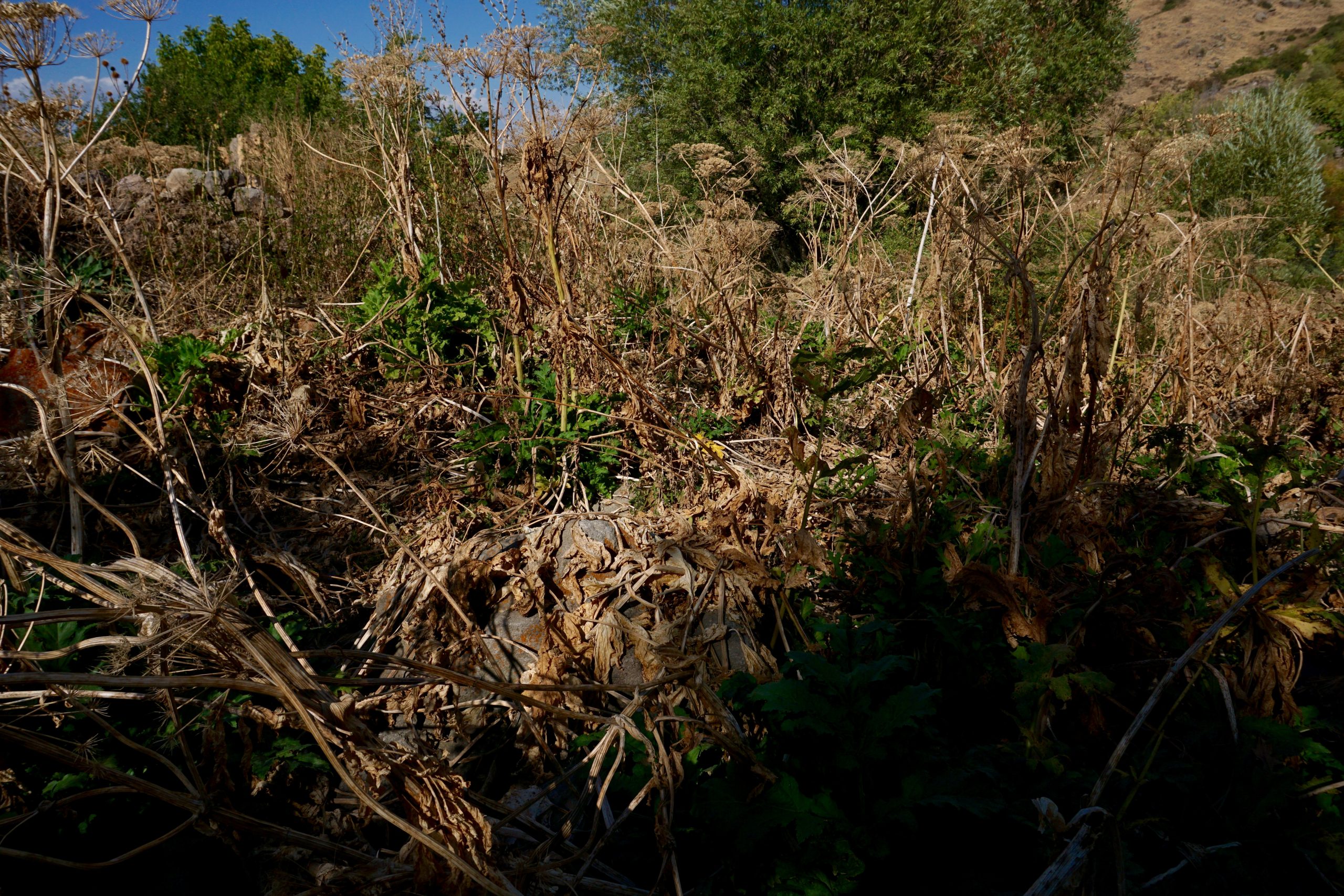 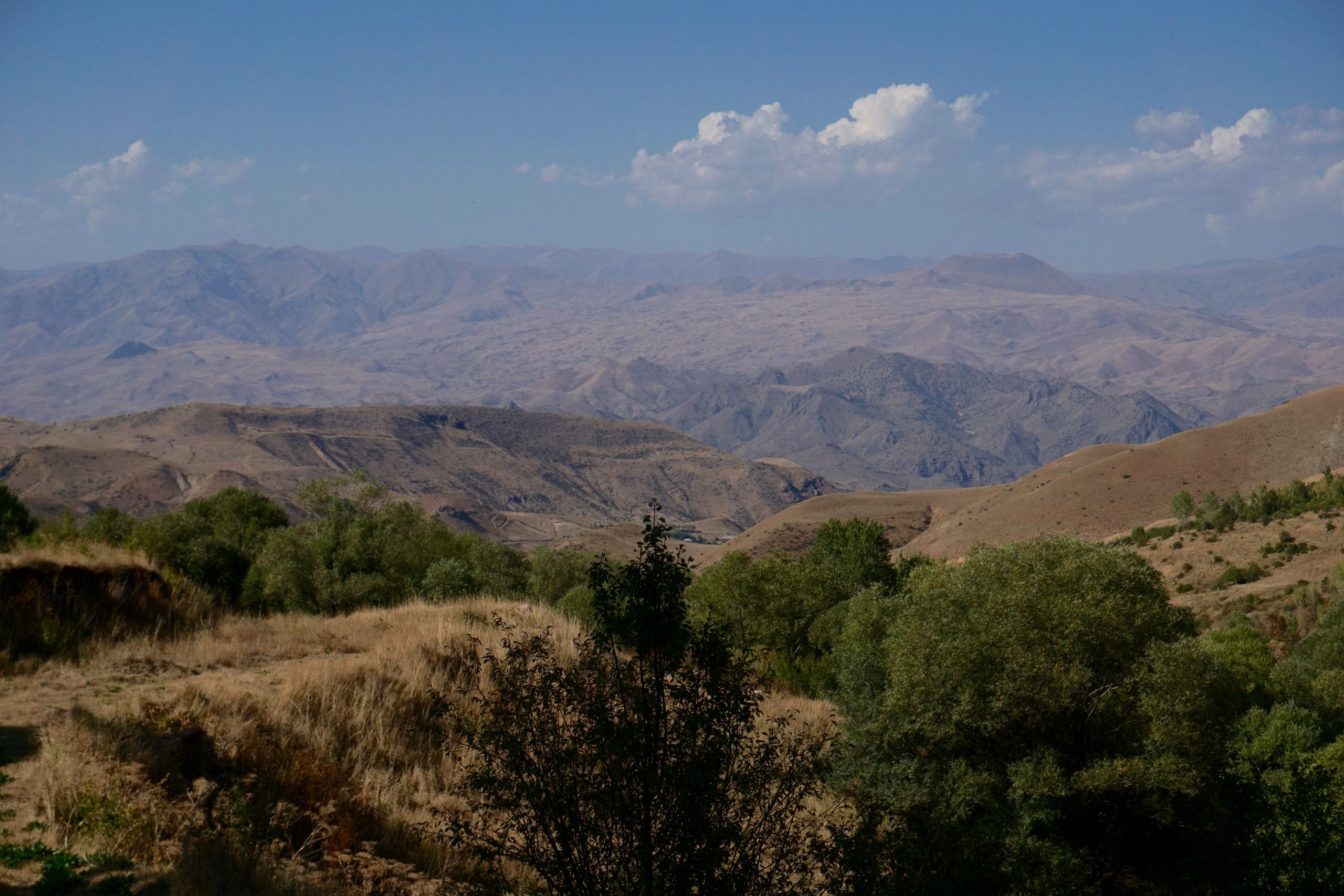 The next highlight was Chumov Lake. Unfortunately, neither for bathing nor for putting your feet in, the shore was too muddy. But it was so pretty and unexpected in the rather dry landscape. 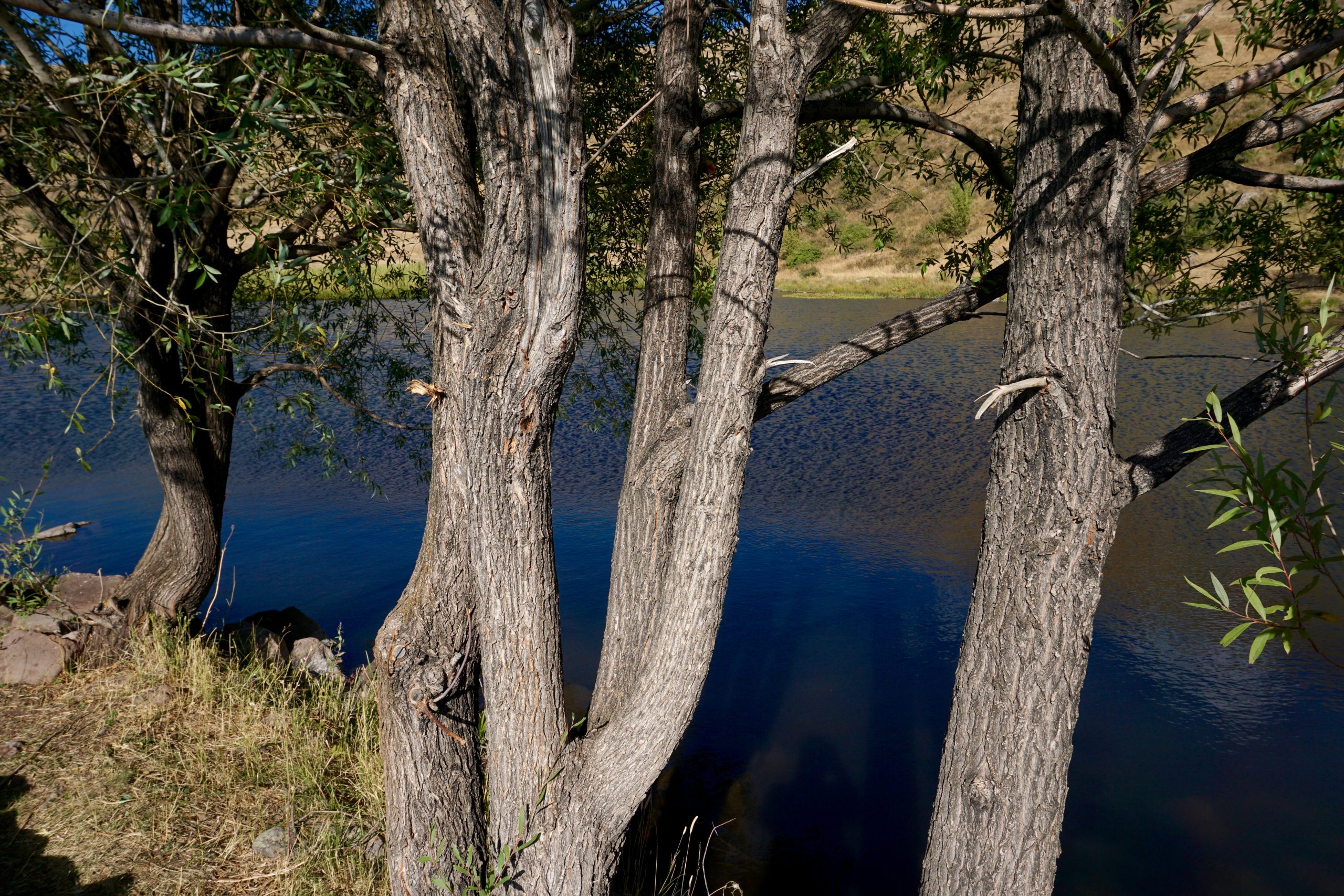 At the shore of Chumov Lake 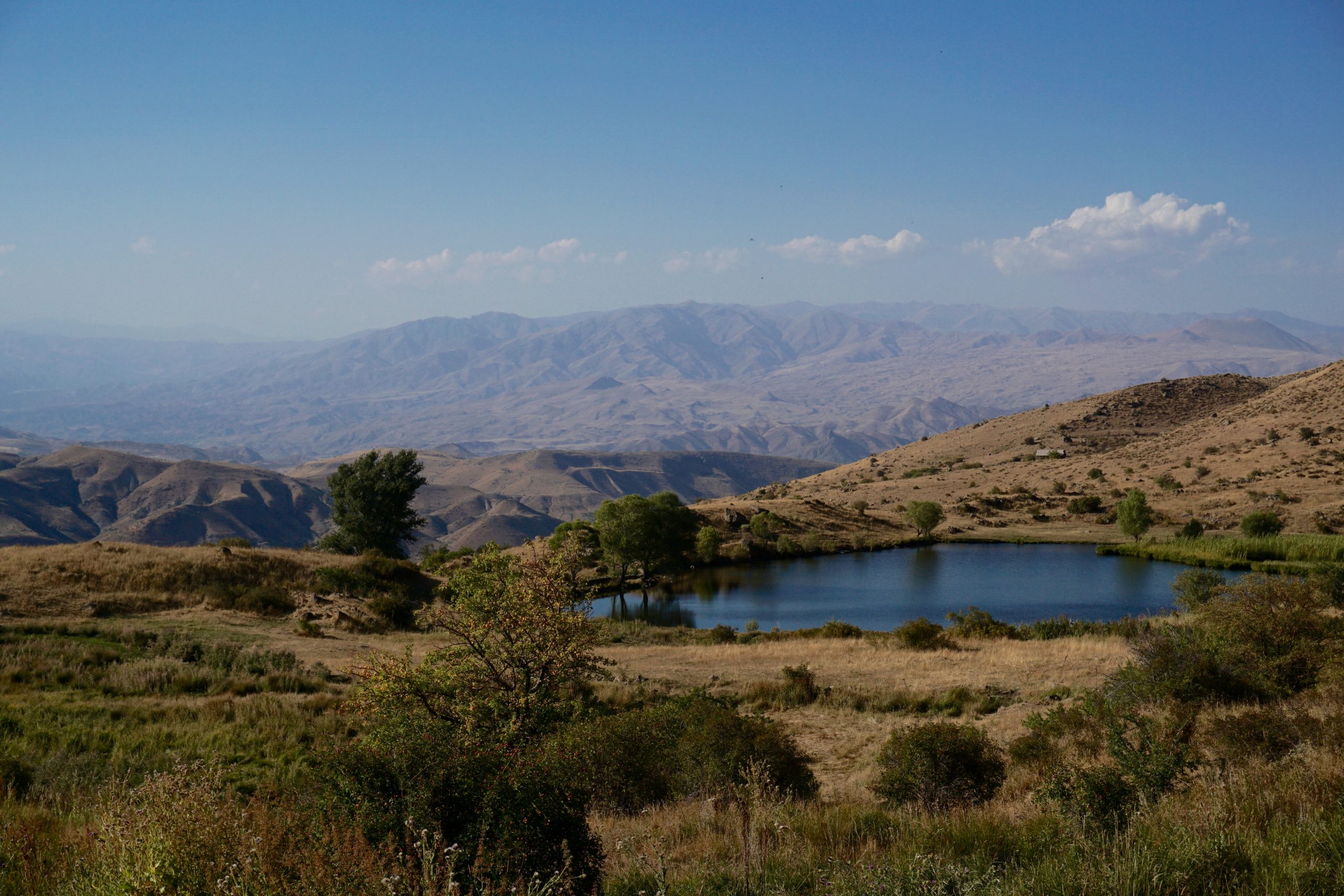 Chumov Lake from a bit further away

And then it was on to the next highlight with travelling luck. Behind this mini-entrance: 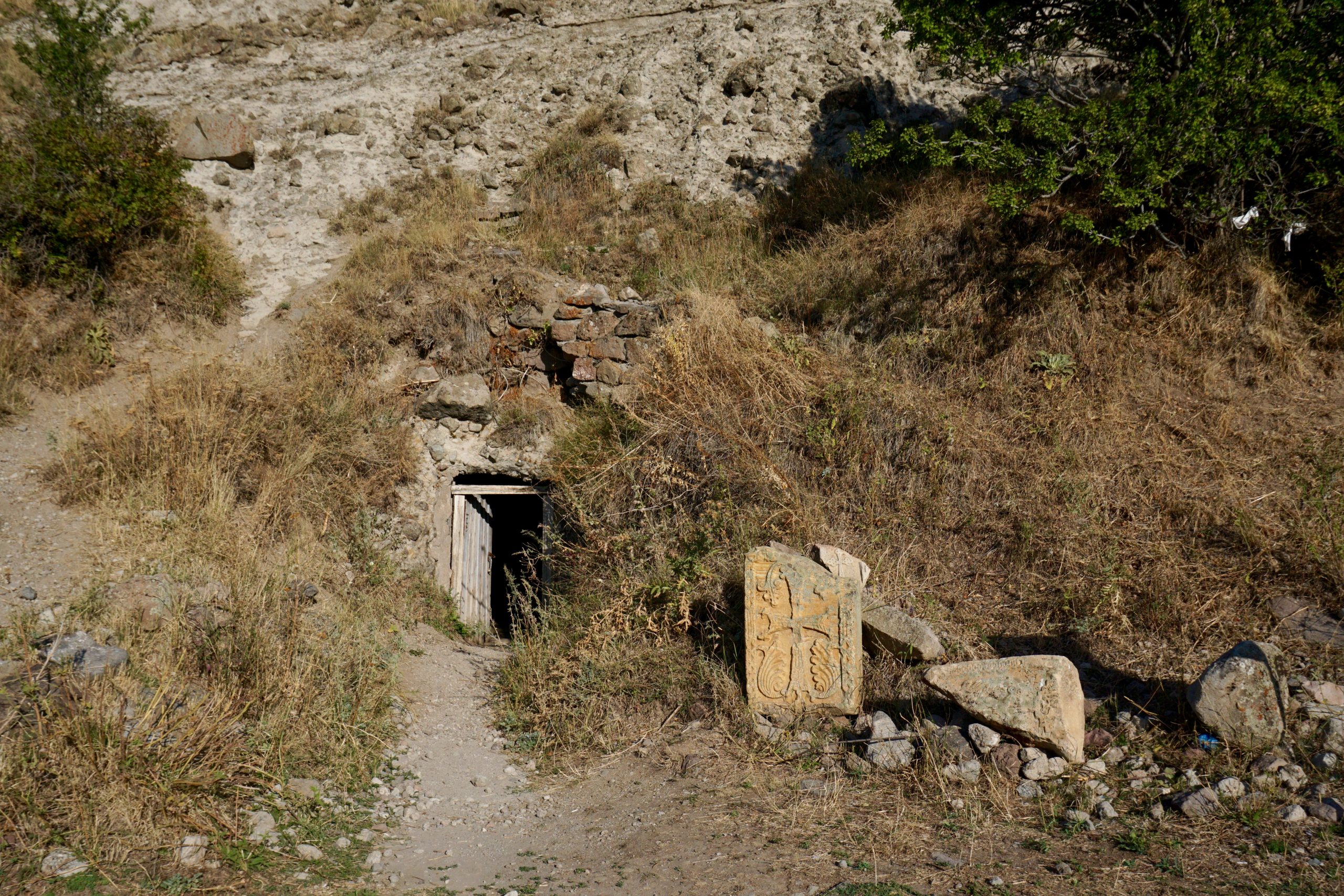 a large cave church was hidden 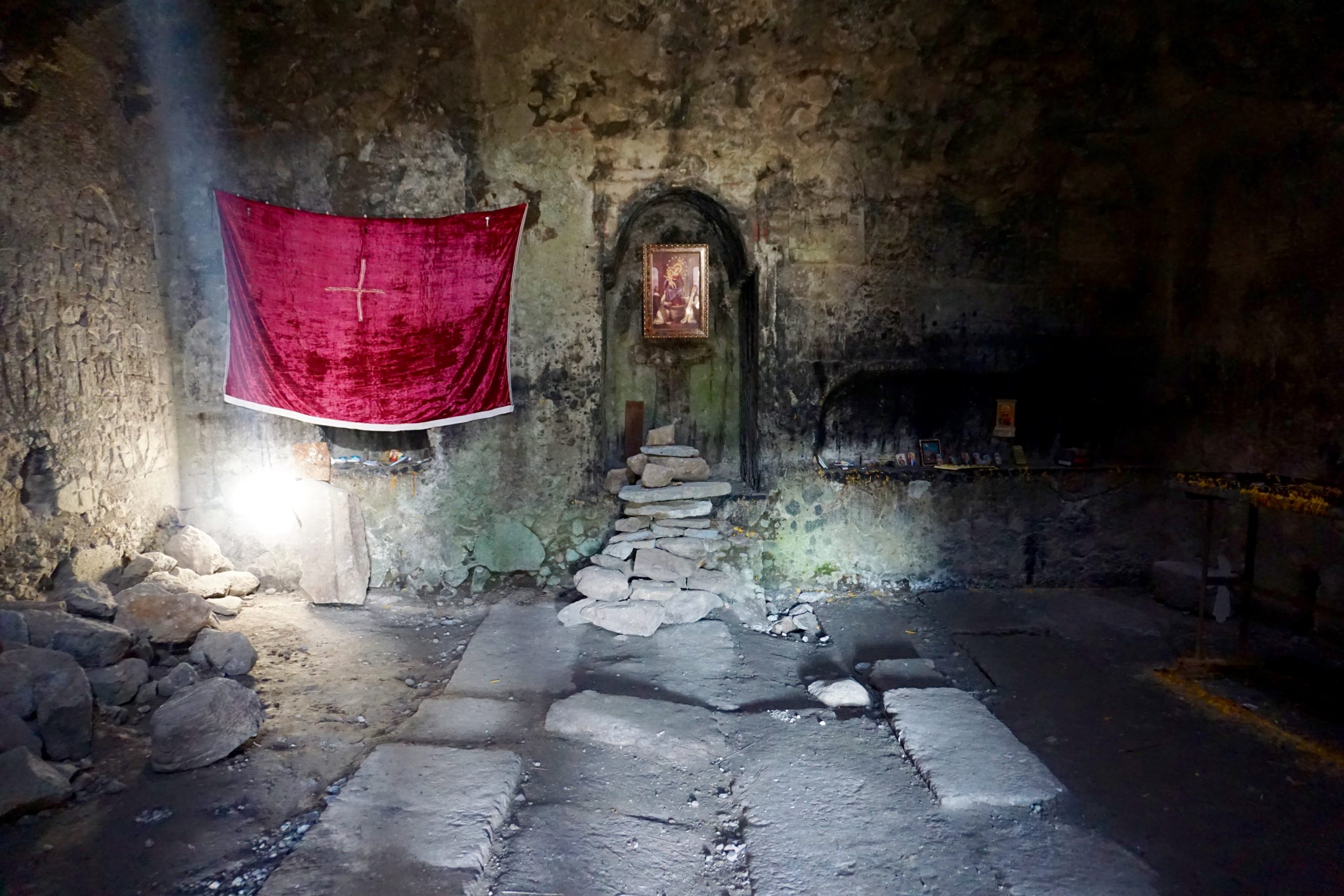 And then a part of a family picnicking in front of it came in and lit candles. 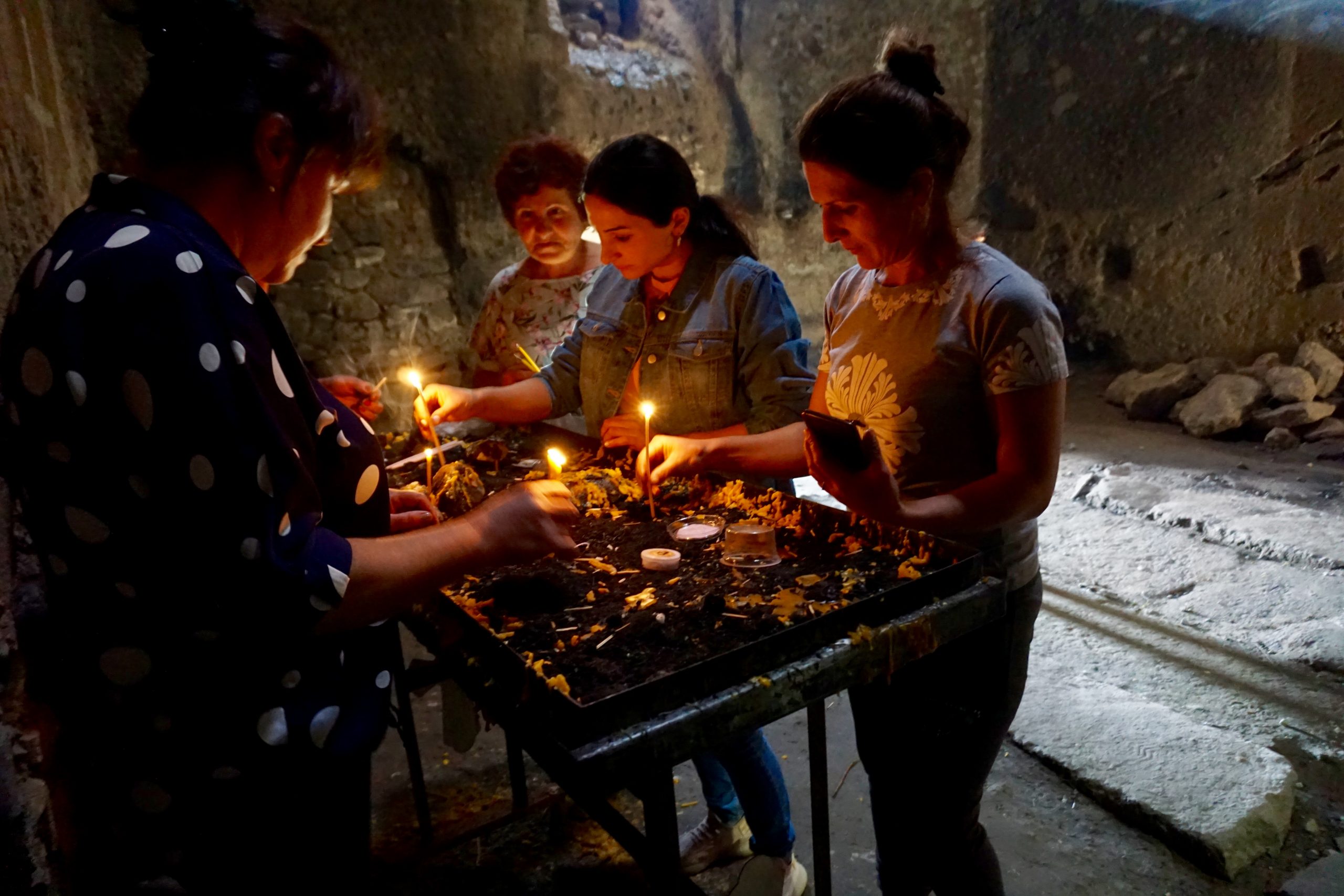 I also got 2 candles in my hand. I lit them for all the people who have stress with Corona – in any way. 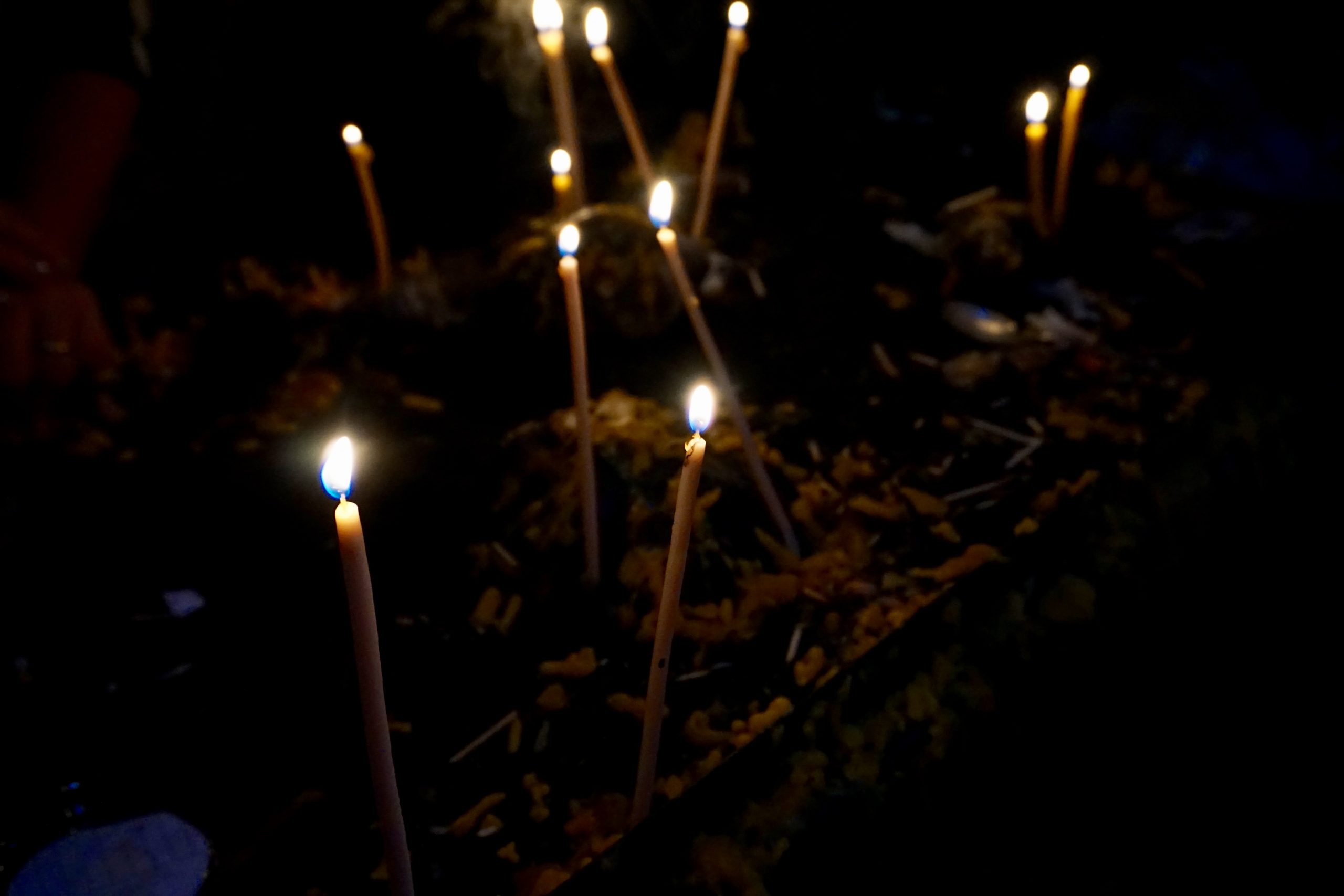 We also did a group photo of them 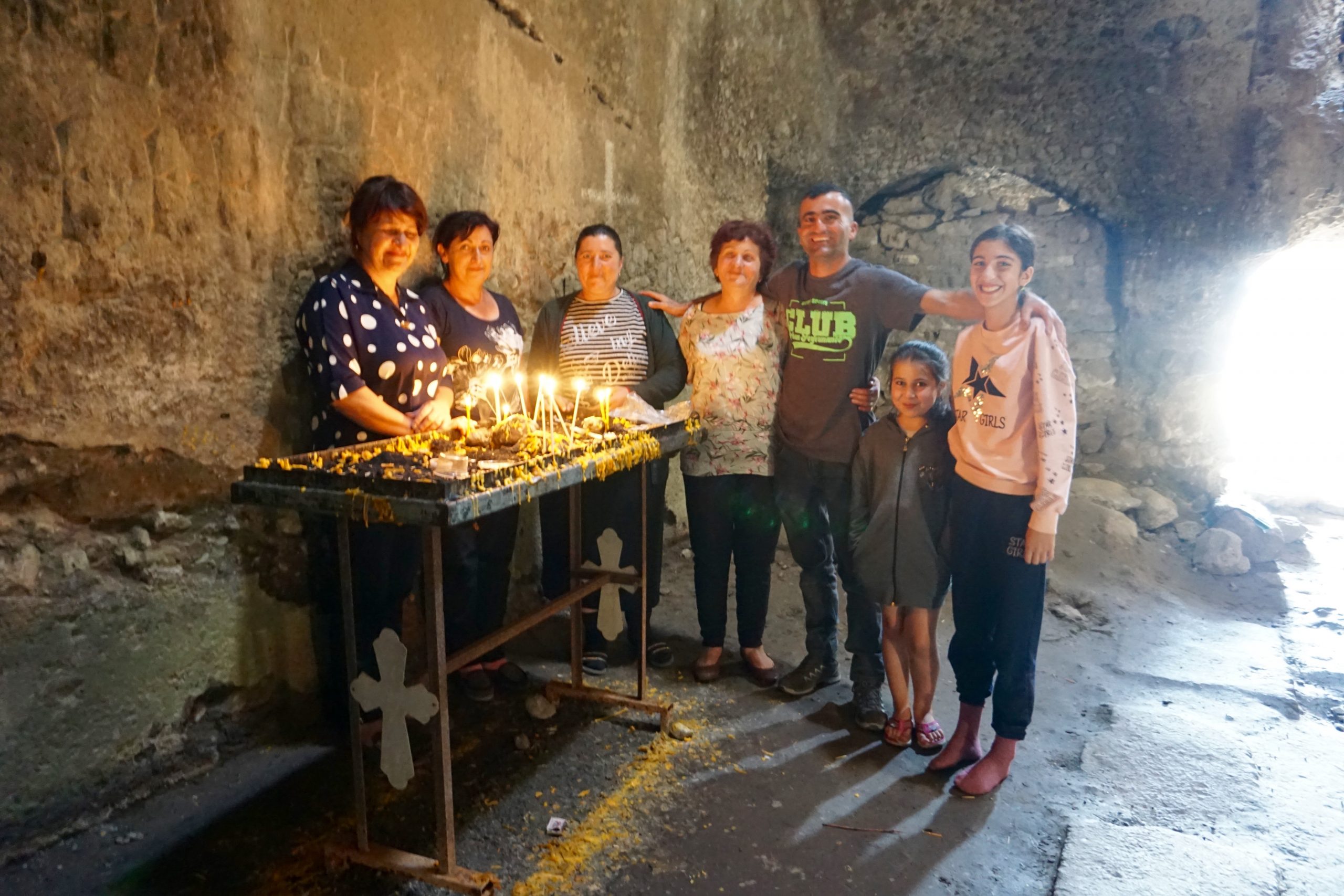 A little anecdote on the side: on the way back to Yerevan, I met someone who knew about it – I then sent him the picture via WhatsApp on request.

I was also invited to their picnic. There were more people sitting at a long table, which was permanently set up for such occasions. The older ones glared at me with all their gold in their mouths and pushed me loads of food and after a disappointed sigh that I didn’t want any vodka, wine or beer, there was also Fanta. 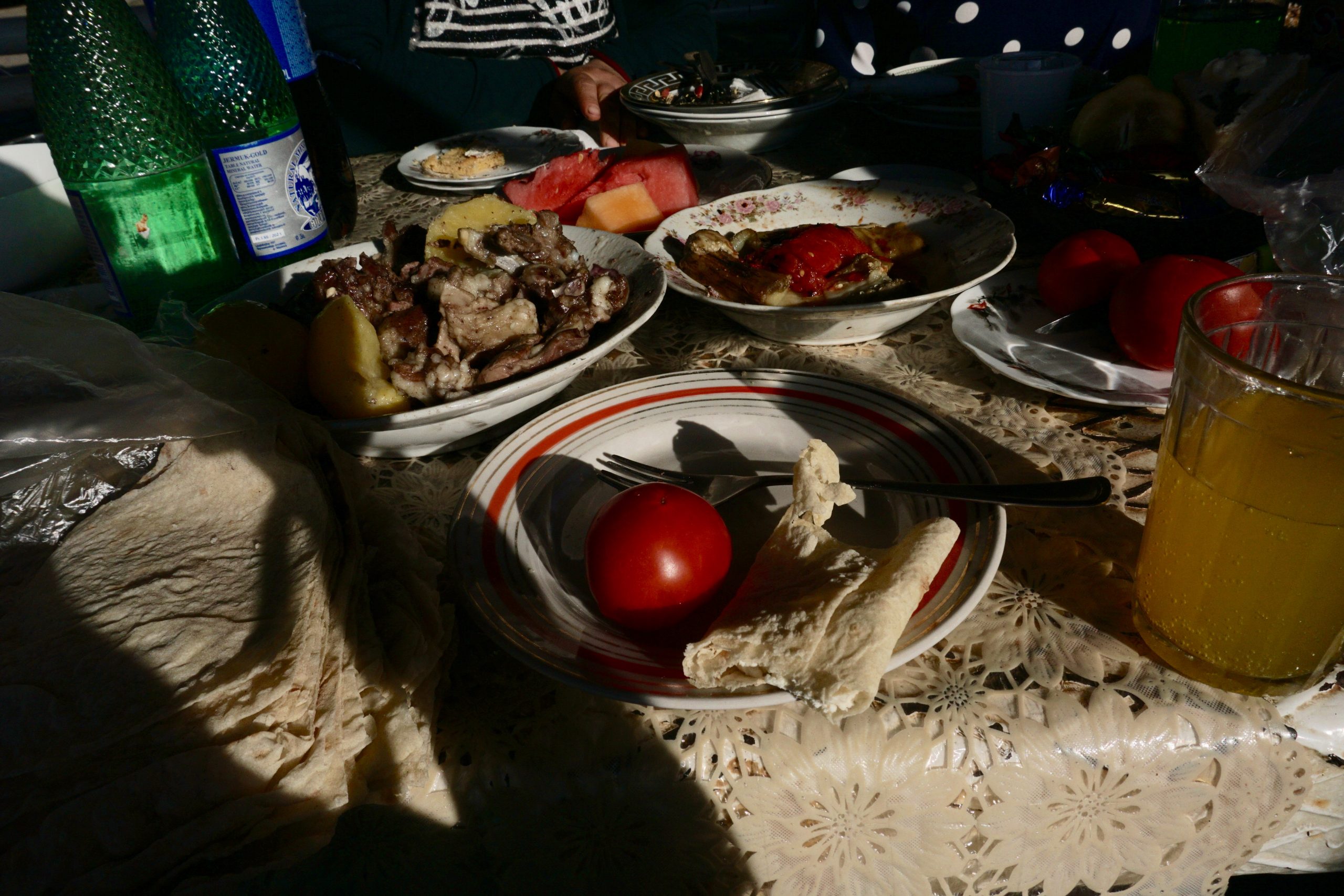 I knew I still had a meal ahead of me and was so very happy to be able to refuse very fatty meat with potatoes. But I had to have some of the other things. We talked Armenian, Russian, German, English and manual.

And then I had to move on so that I would be back at Hamlet and Gohar’s in time for the real dinner. There, too, they served up a good meal. And later I went to bed with a belly full of travel happiness.