In terms of landscape, the next day offered variety, colours and stones. There were also more metres in altitude to climb, about 6-700. But first we took the unfrequented road to the next village, Kapuyt. 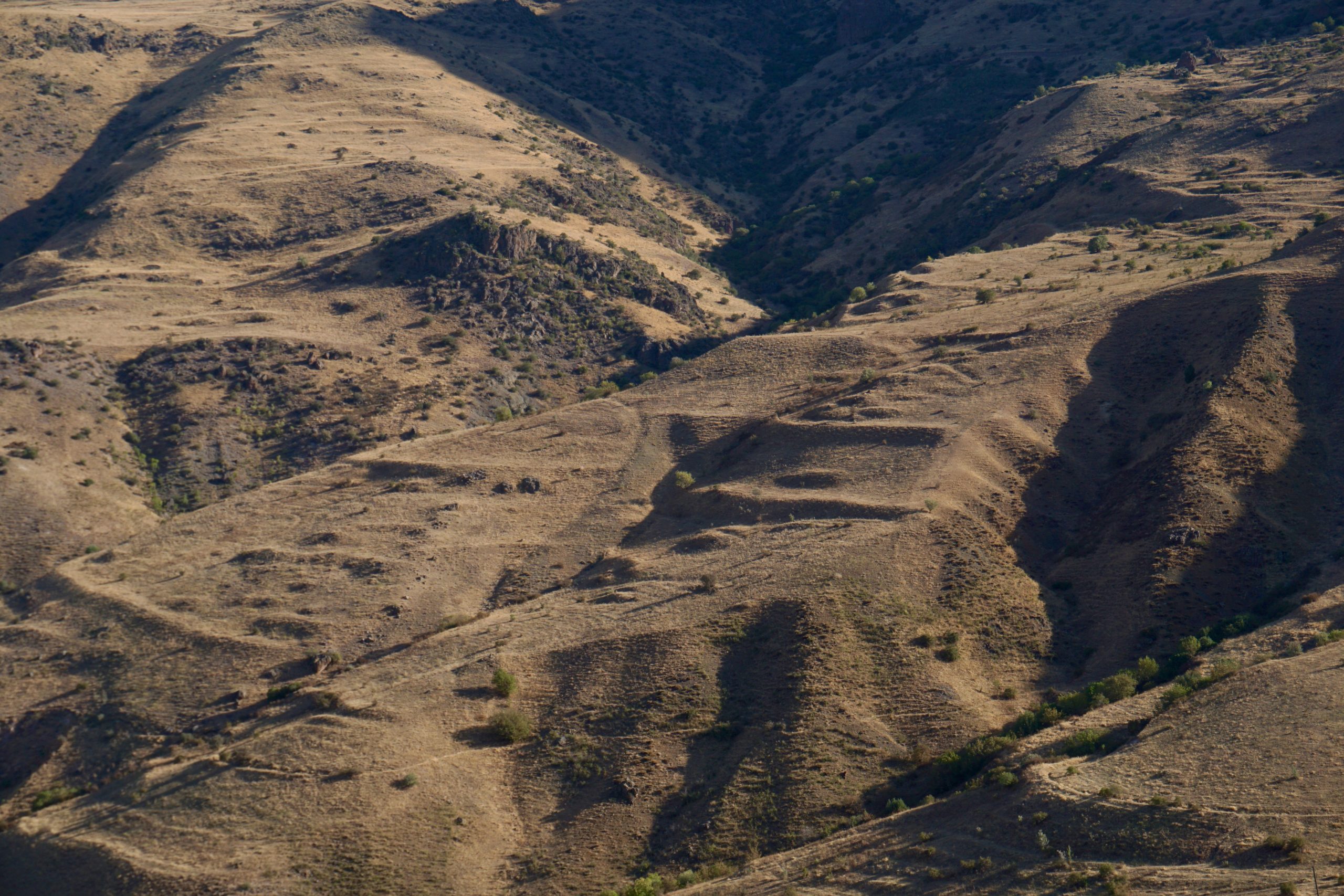 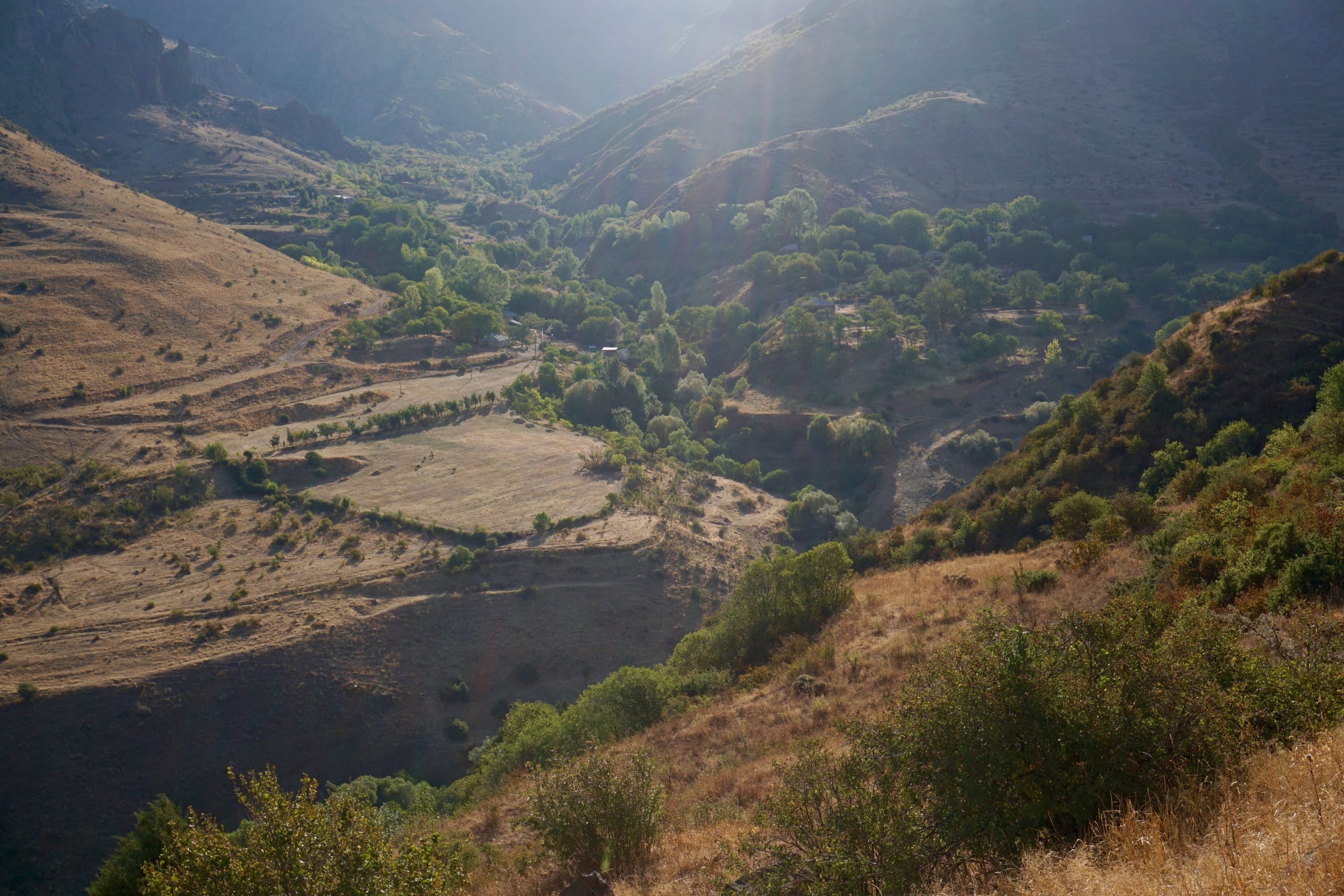 In Kapuyt I met the only person – until I arrived at my destination. He was very friendly and said that I was on the right path. 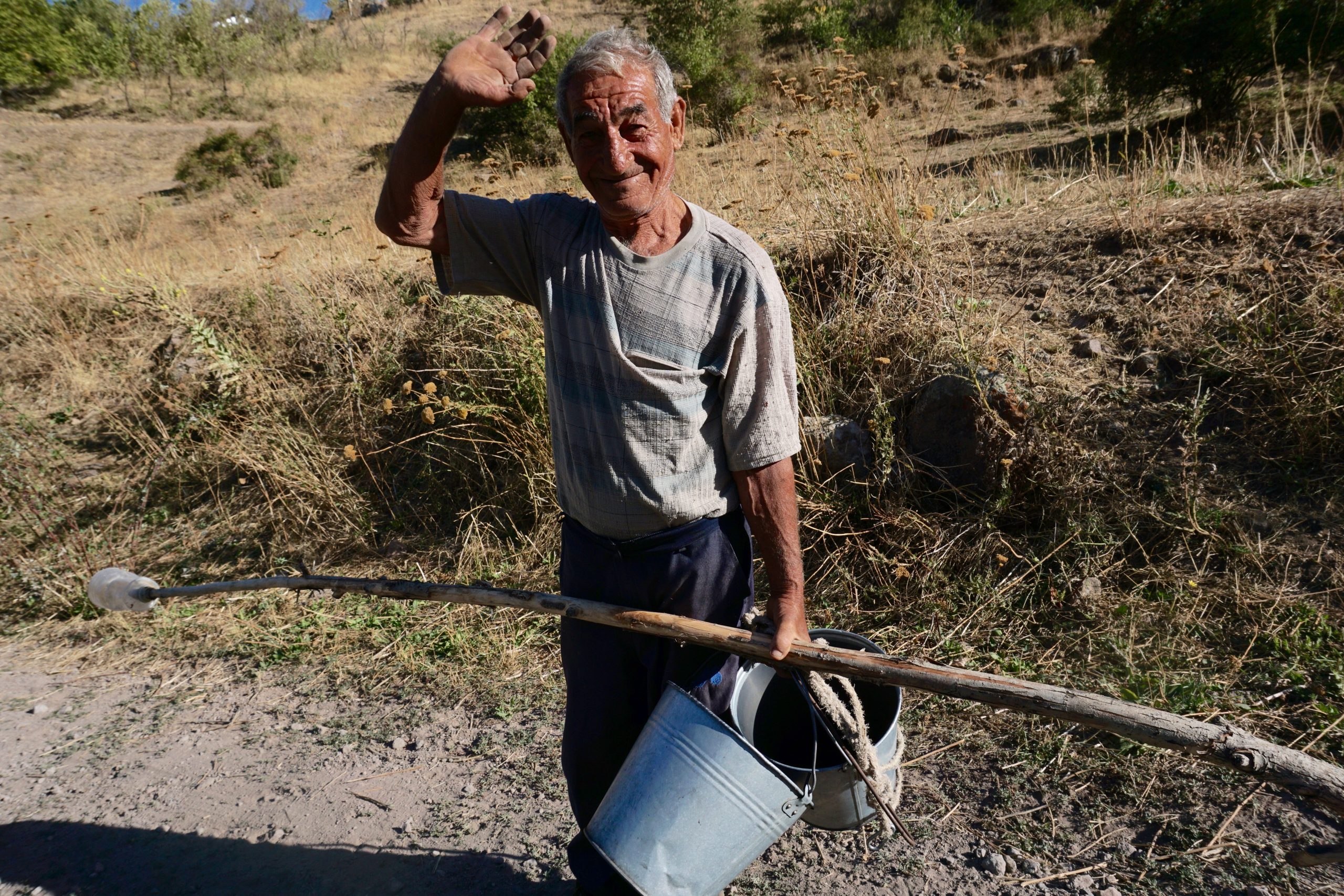 only person I met on my way

It went quite steeply uphill for quite a while. Again and again, I enjoyed the great landscape details, especially the rock formations: 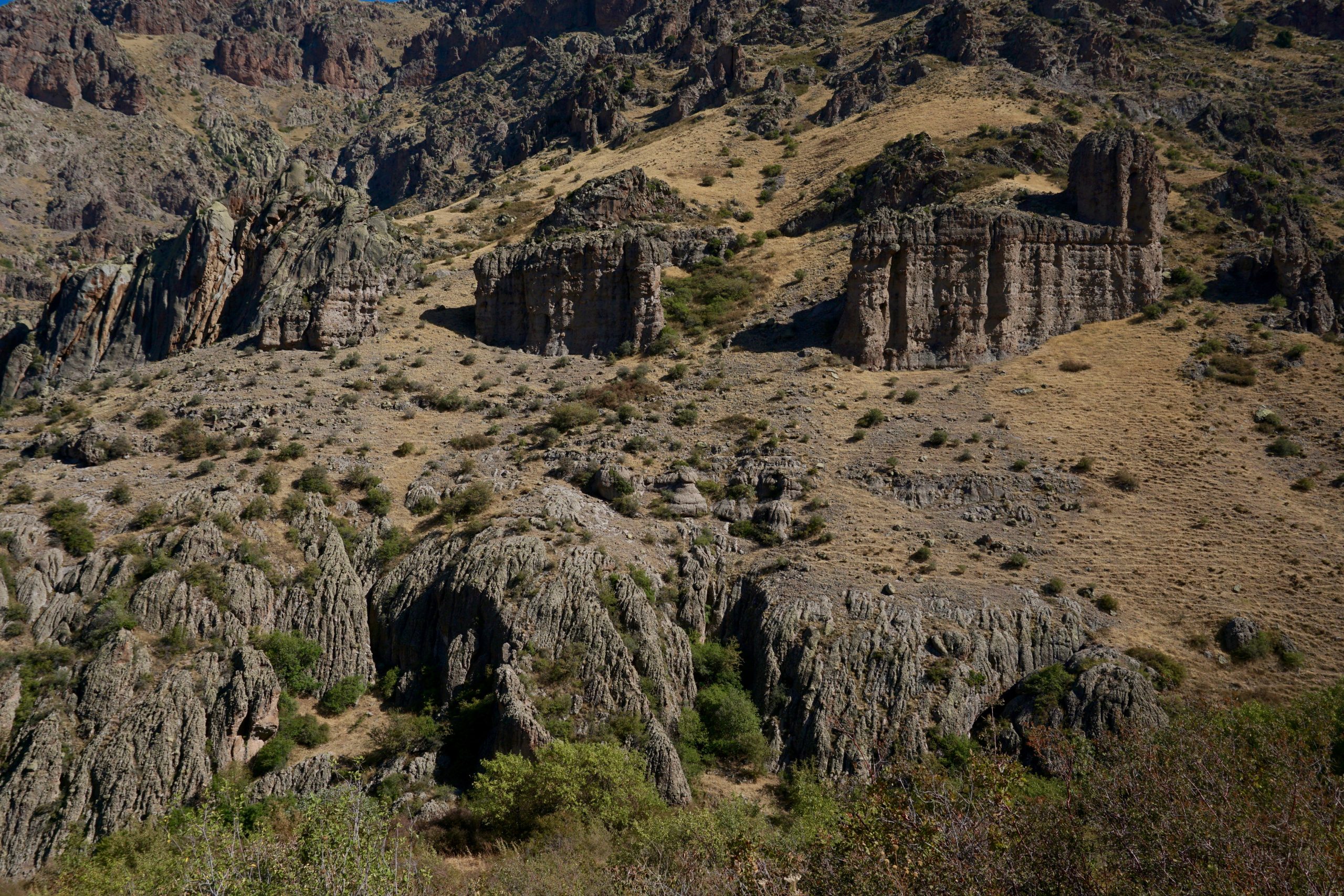 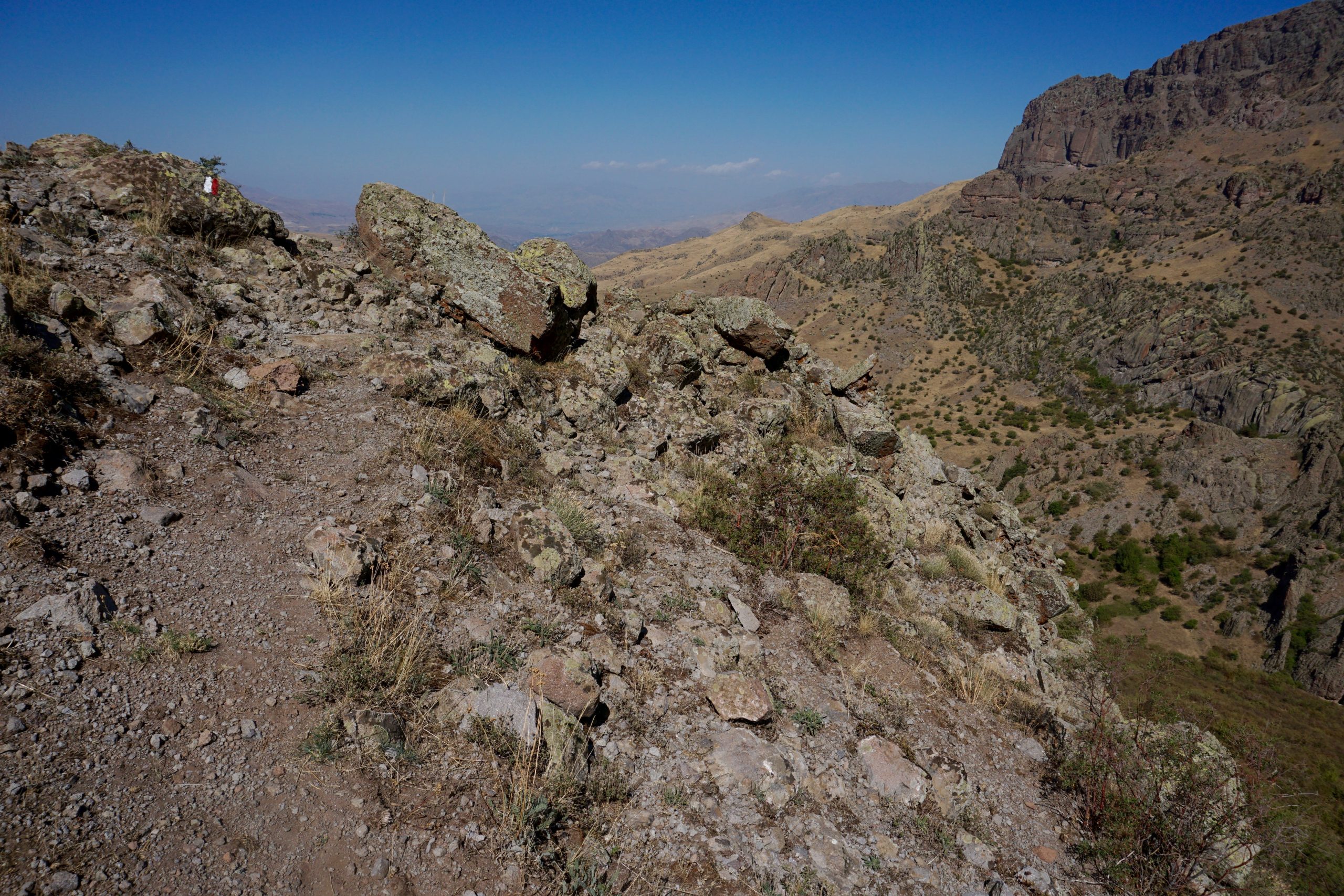 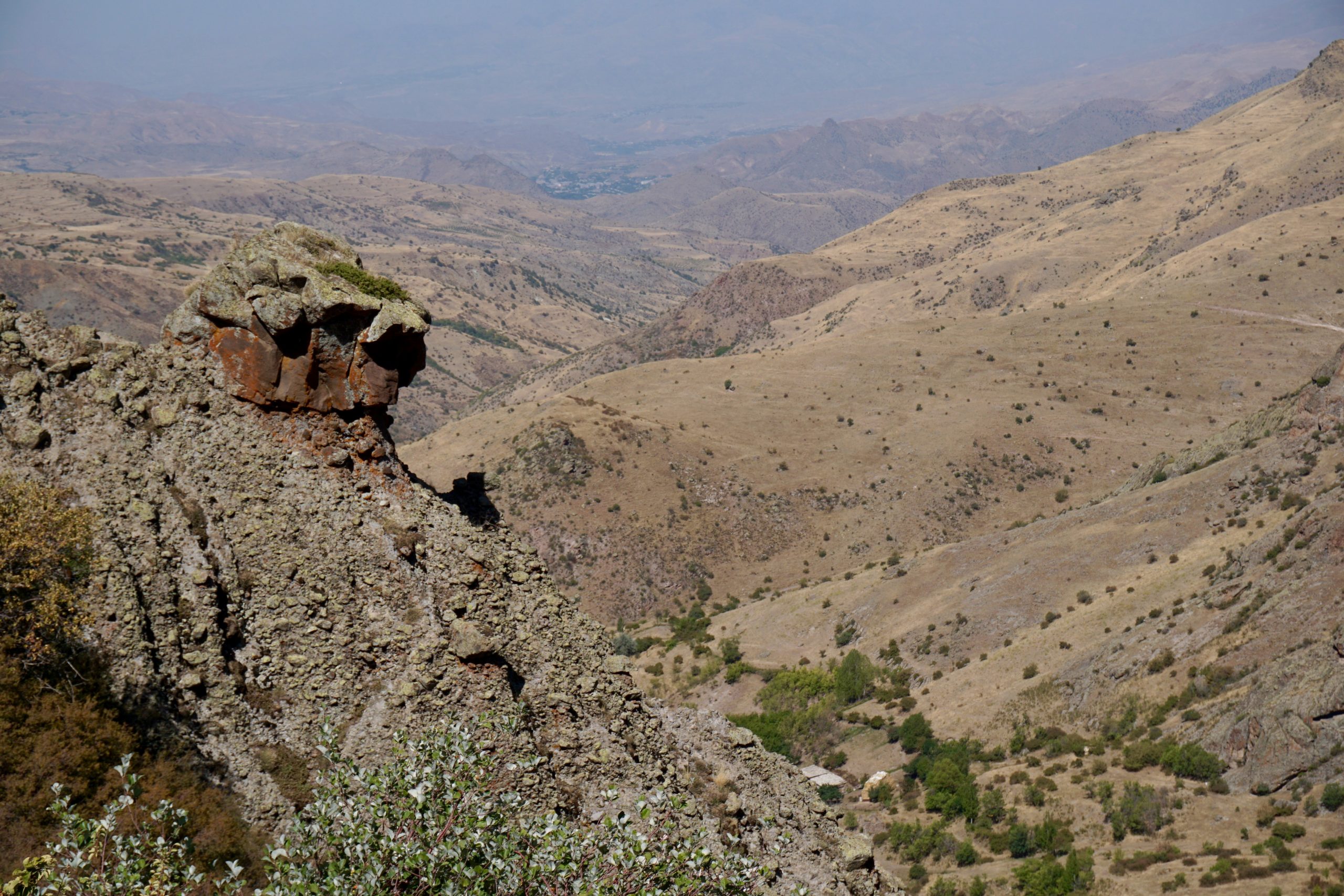 Rock with lots of landscape

But there was also some vegetation. This I thought being beautiful. 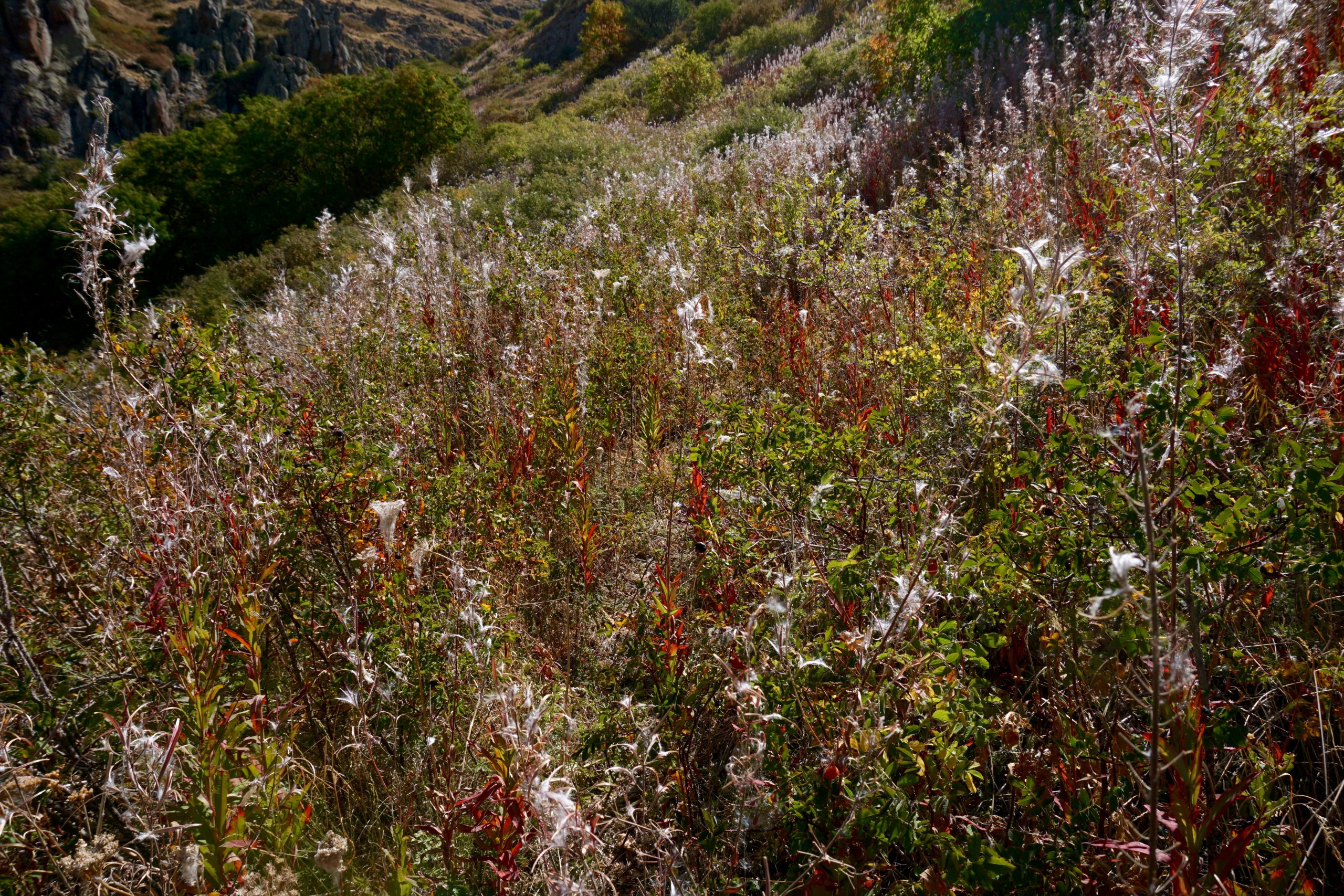 Vegetation with path hard to see 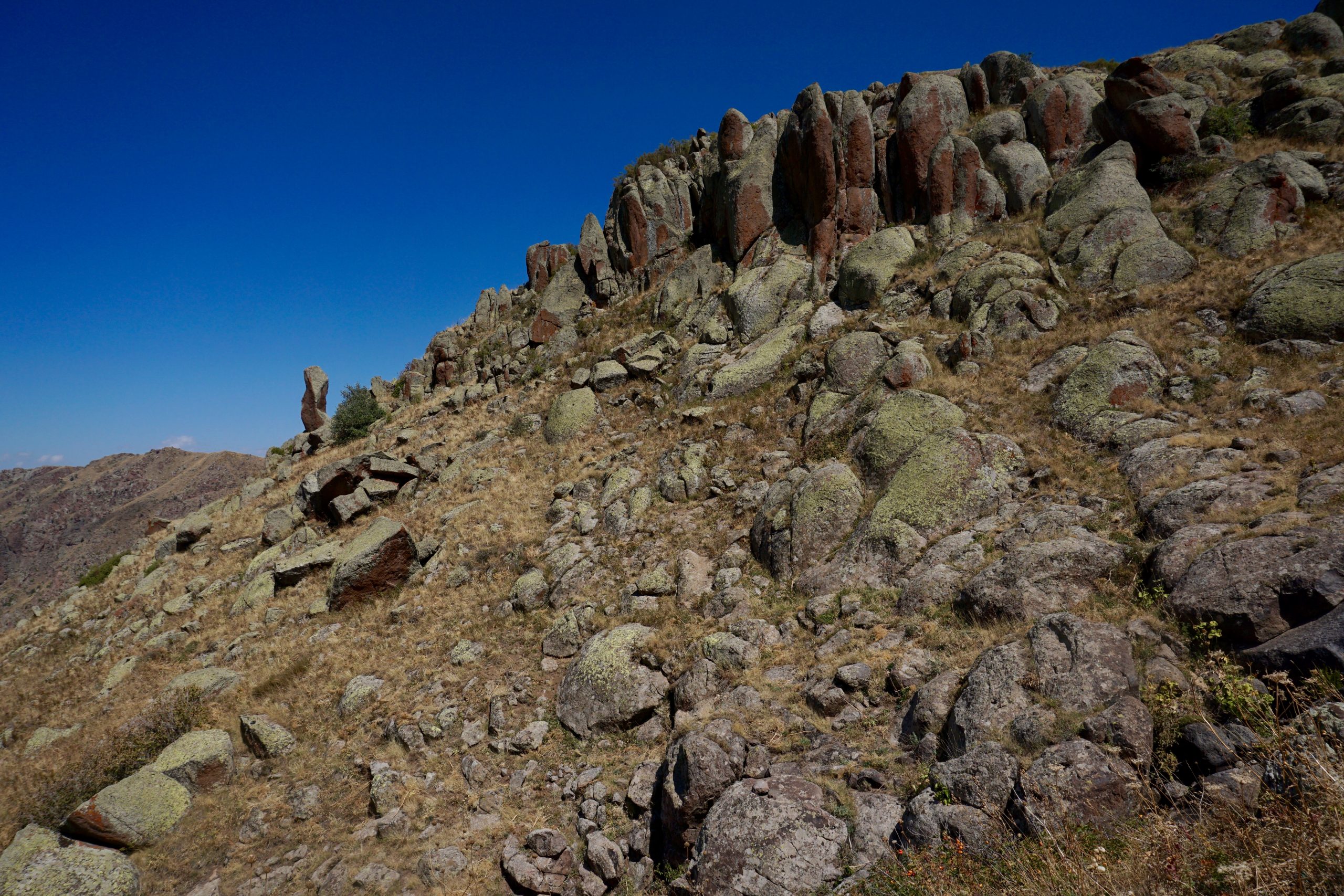 And above the stones it suddenly looked like the Changthang! Well, a little bit, at least that’s what I thought. 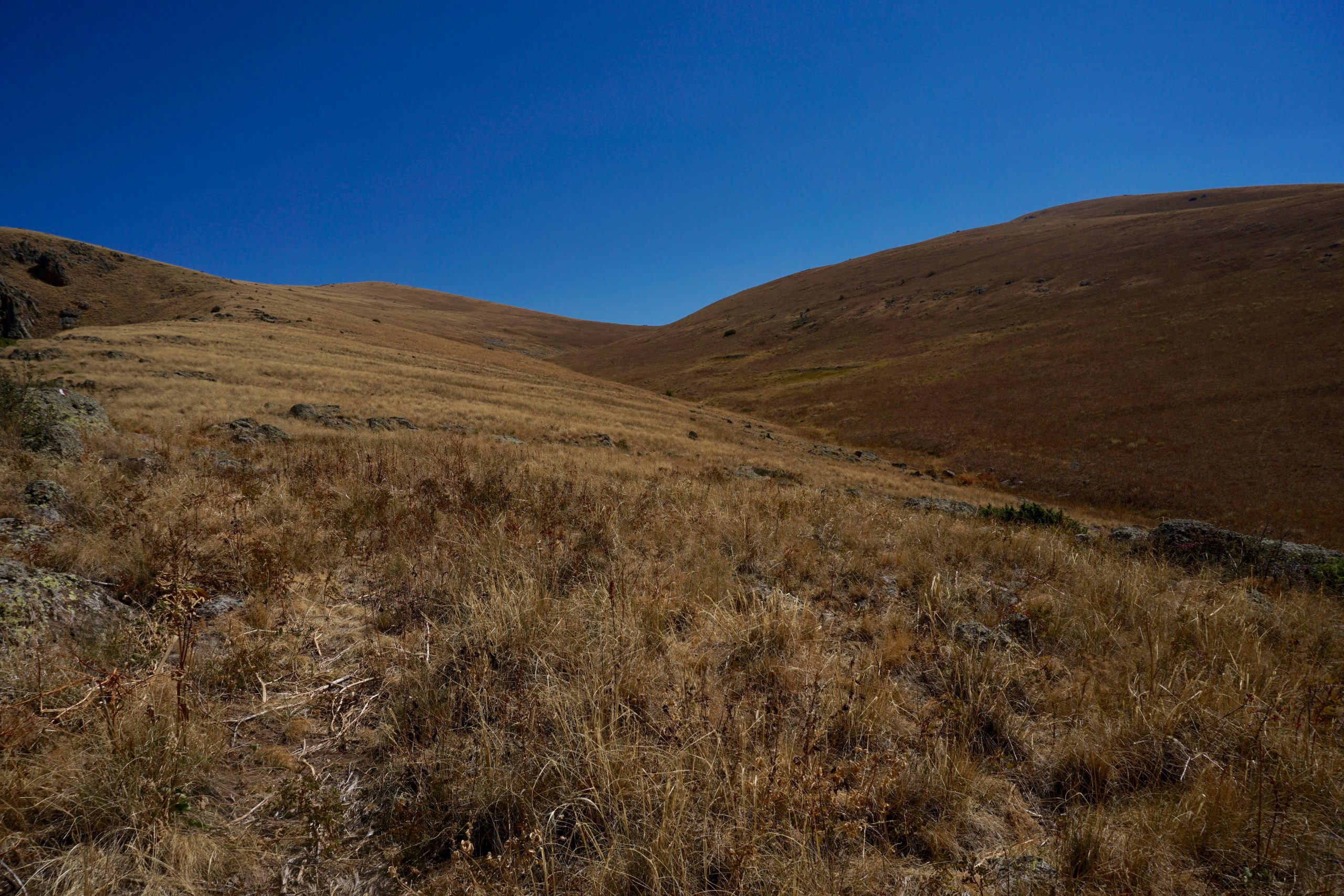 However, I left the Changthang to the right and went on a great high trail where I found even more great rocks. 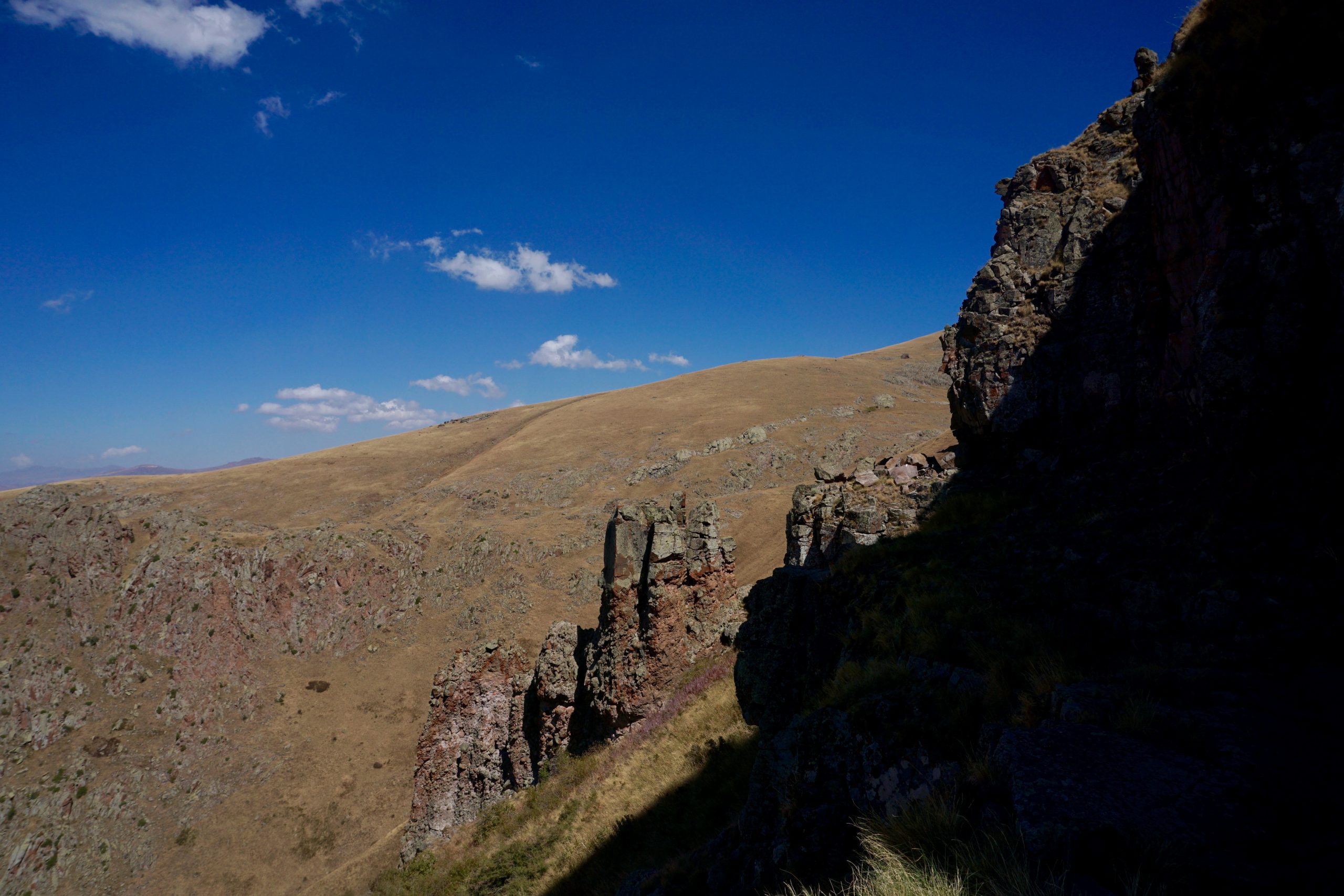 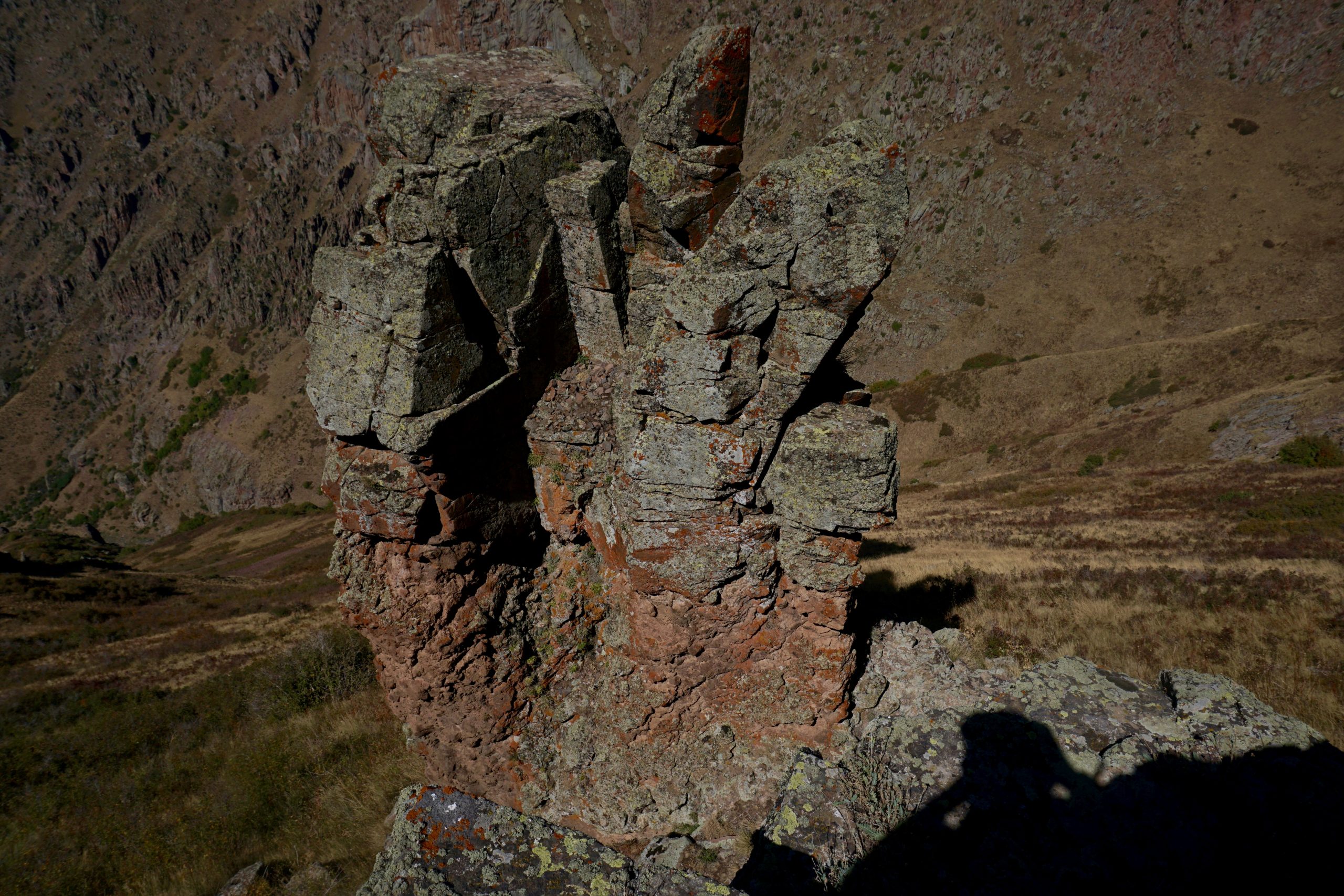 Rock left of the path 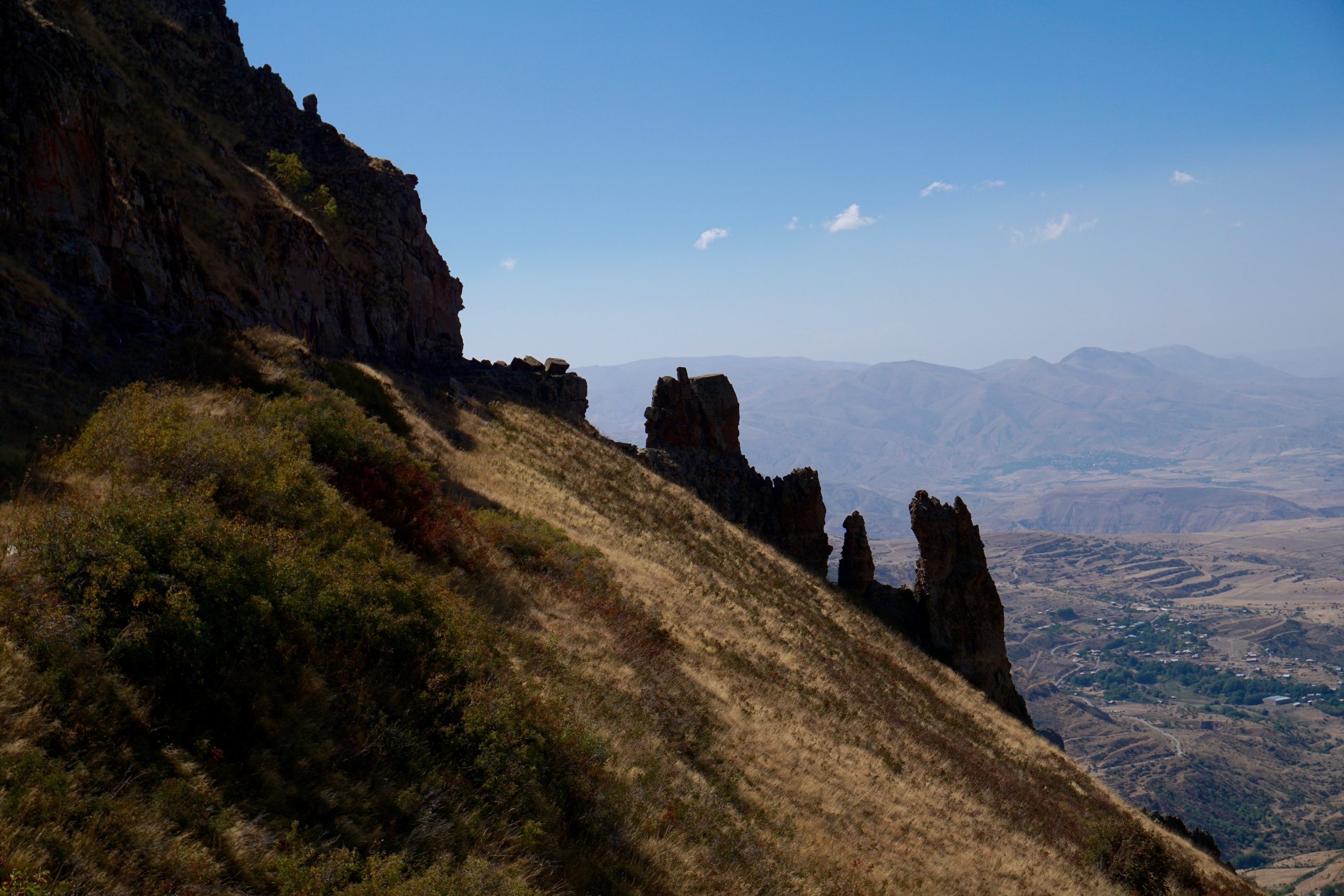 View back to the rocks

Mhm, I think I’ll cut it short here after all. I think it gave an impression that I was very pleased with the rocks, the colours and the altitude. And yes, I was also pleased by the absence of people.

I then went down another valley to the next village, Artavan. This looked a bit scattered to me and I had no idea how to find my hosts. At the first turn-off I called them – but only had an Armenian-speaking woman on the line. I called Hamlet again, who also only spoke Armenian, but who had arranged the accommodation for me. I was actually able to make myself understood. Various calls followed, first from a young woman with broken English and then from another with very good English. This was Nune, the fiancée of my hosts’ son. And she was now trying to find out exactly where I was and how I and my hosts could find each other.

All of a sudden, my eyes fell on a person – I ran to her with Nune on my ear and just passed the phone: 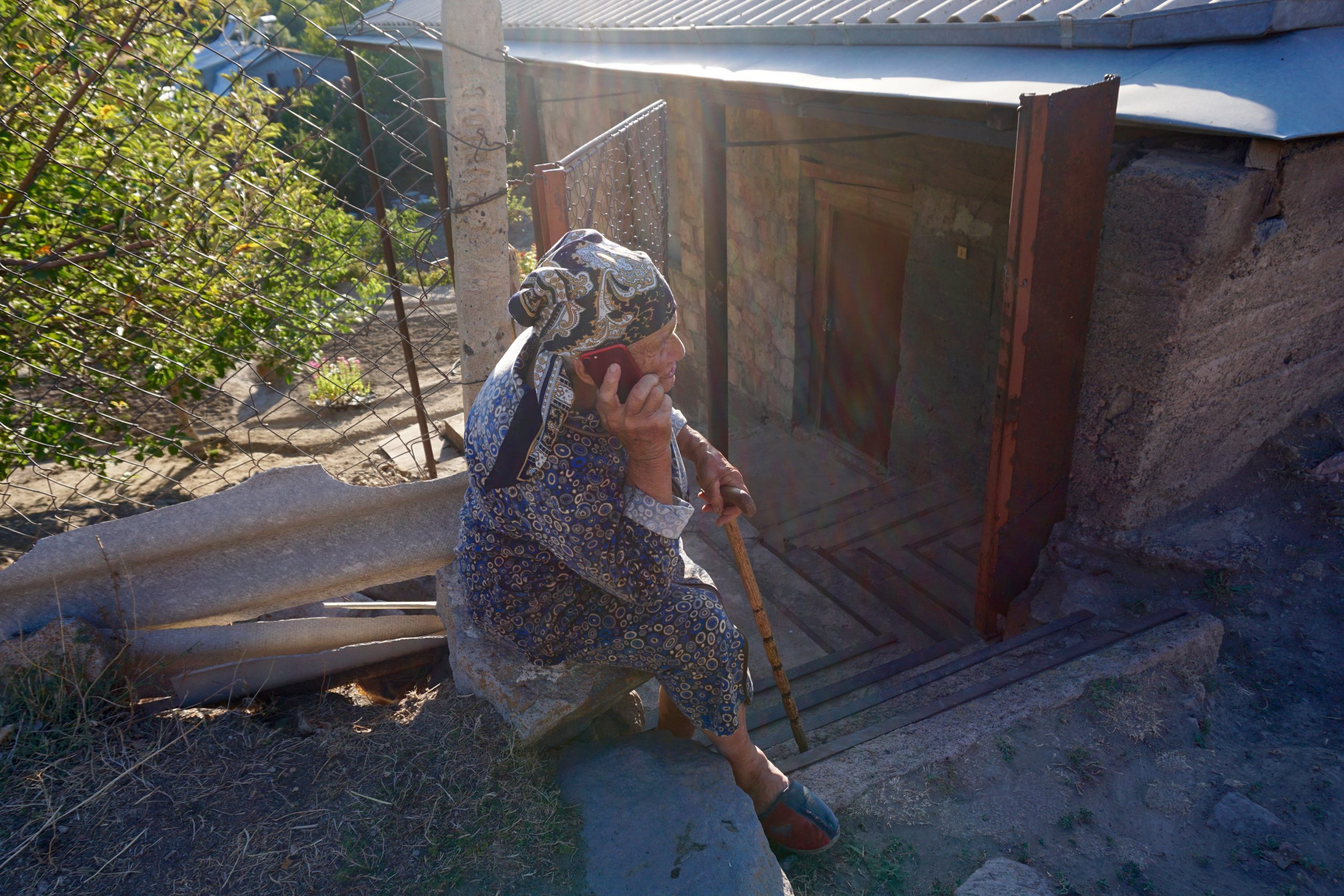 Old armenian woman with my mobile

After the woman and Nune had overcome their astonishment, they agreed that the woman would lead me to the centre of the village and at the same time Nune directed my hosts there. And so the woman huffed and puffed and groaned with me for about 100 metres slightly uphill. I kept apologising and smiling gratefully at her.

And that’s when I saw a car rattling along, a woman jumped out, ran towards me, beamed at me, took my hand, babbled at me and walked with me hand in hand joyfully to the car. I was put in, we drove another 100 m or so (yes, I was already very close, but didn’t have an overview), I was led into the house, served delicious food (had left myself extra time so I wouldn’t get another confusing early dinner), conversations with Nune, a shower and a super bed with the mattress right on the springs, that was fun. 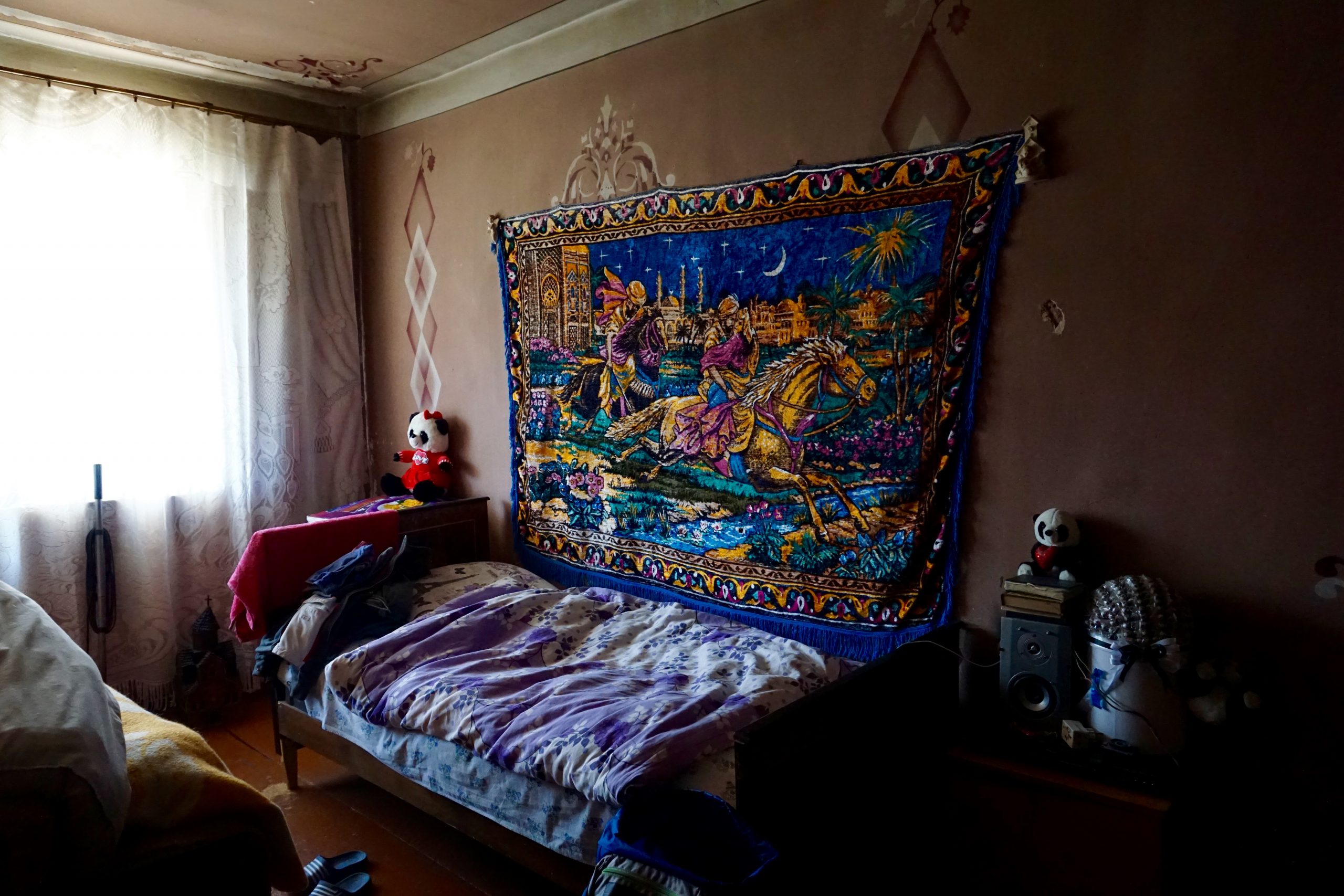 I will introduce my hosts Asgherik and Sambat in the next post – I stayed another night.