I find the combination of coffee with biscuit unbeatable. Armenians prefer something else: coffee with toffee. They have a large selection of these here, all very tasty. 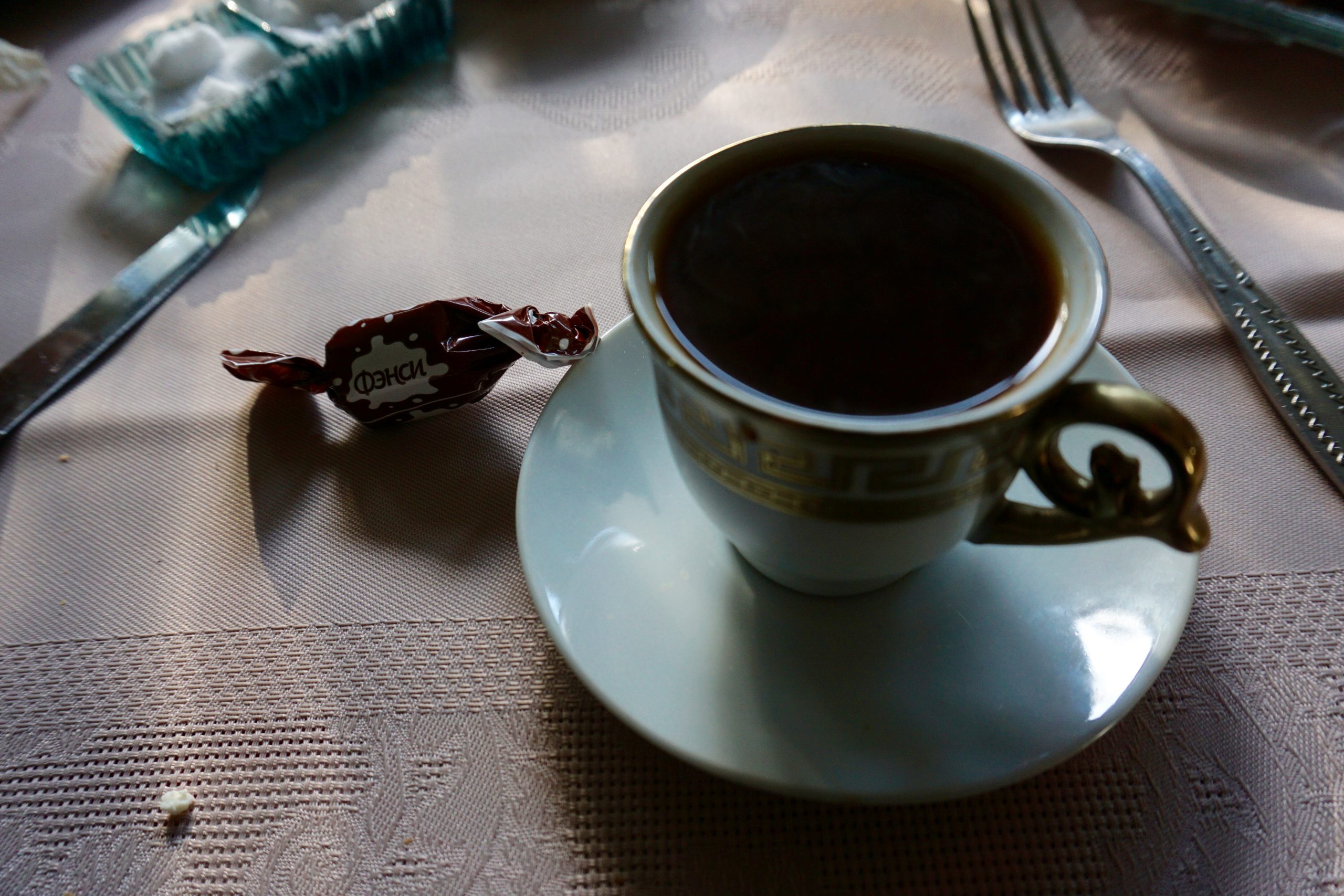 But they don’t just drink coffee; Guhar, for example, collects and dries herbs and flowers for tea. 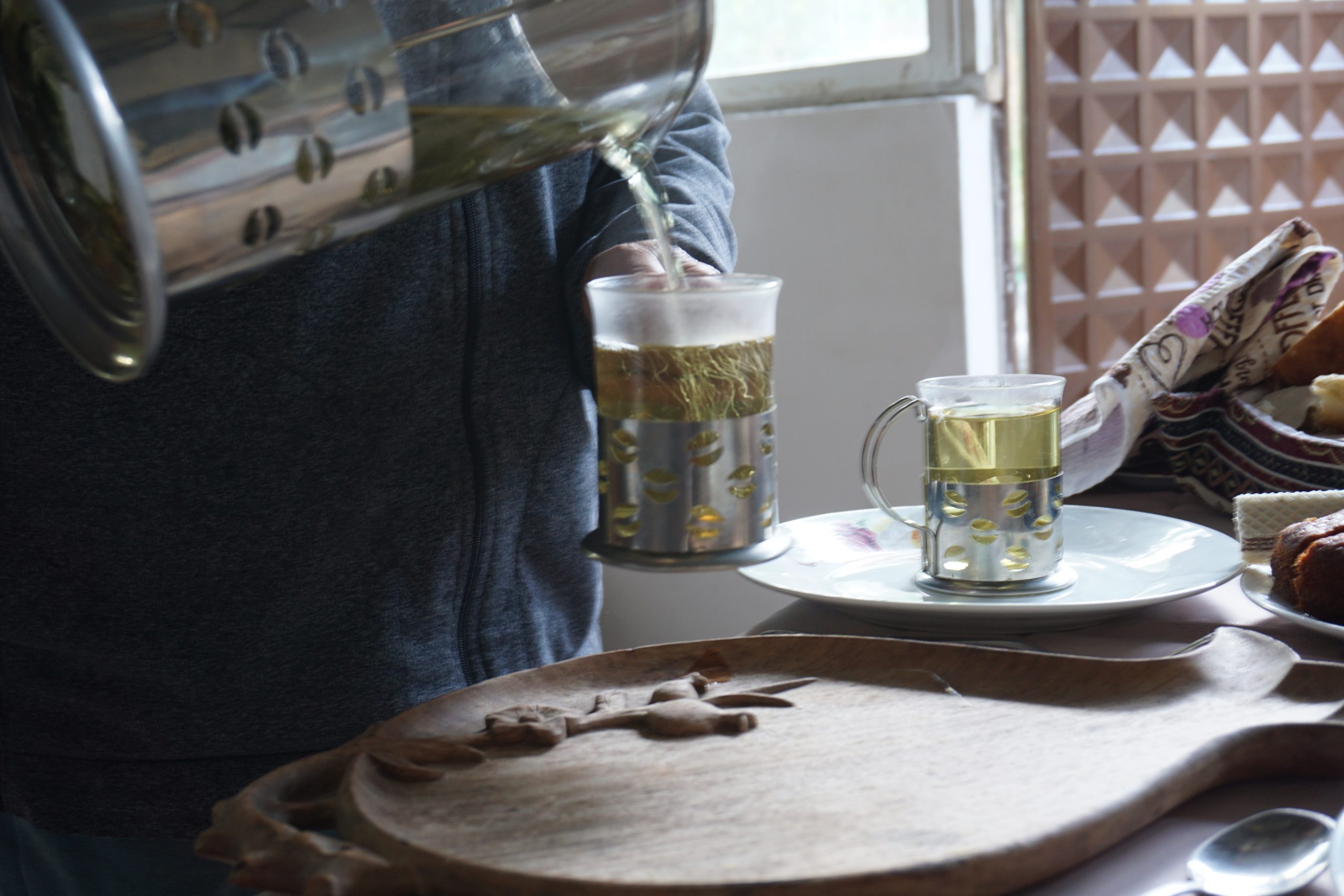 After an abundant breakfast, discussions about whether I might meet bears or wolves, the arrangement of an overnight stay for the night after next and the exchange of much cordiality, I shouldered my backpack and set off. 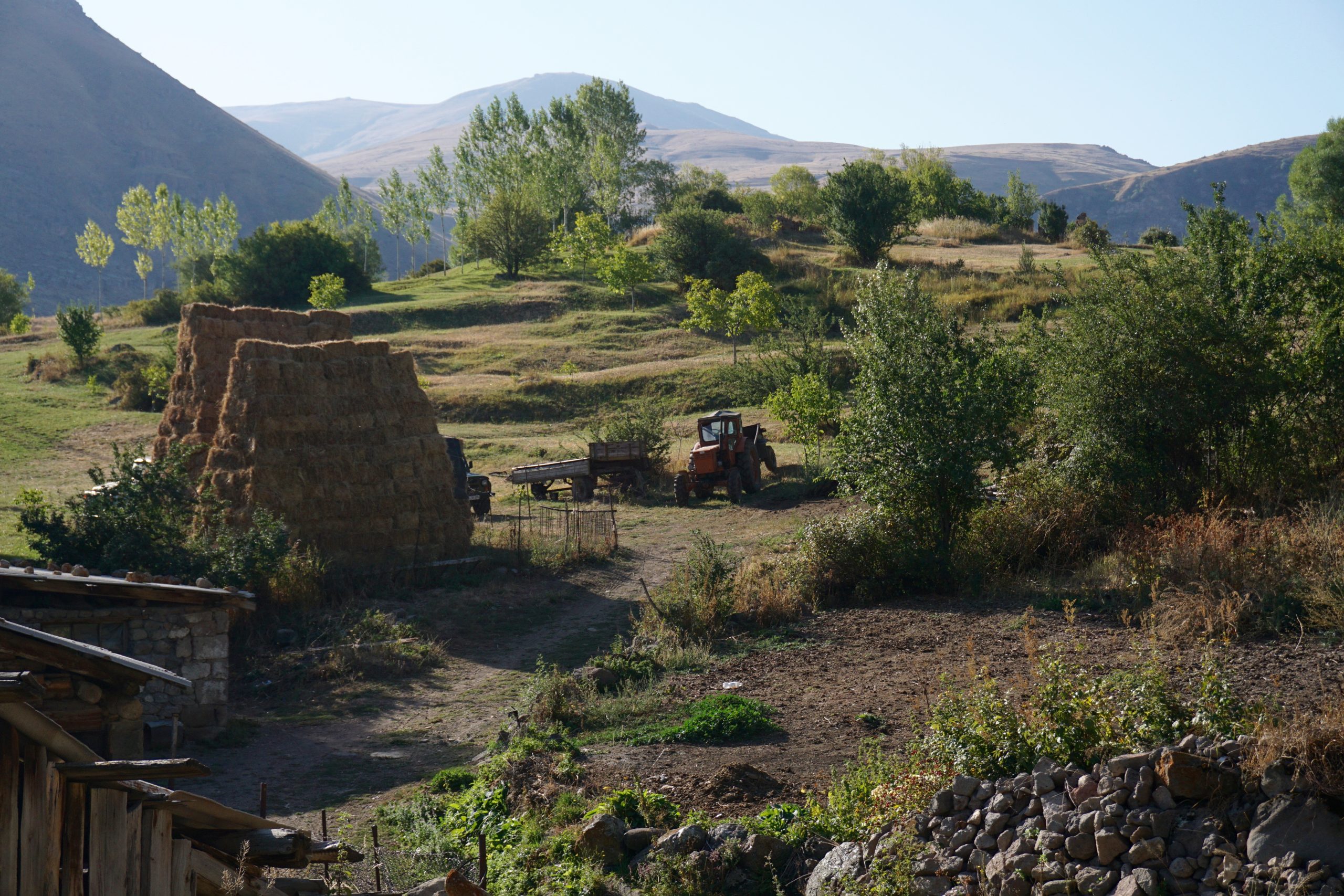 The harvest was already mostly harvested

I had 3 orientation options: Trail markers, Maps.me and the HikeArmenia app. The combination of these worked super well. It’s funny, you see the familiar red and white markings like in the Alps – and look all around at a foreign mountain landscape. Sometimes I had a feeling of being far away, sometimes I felt really “at home”. 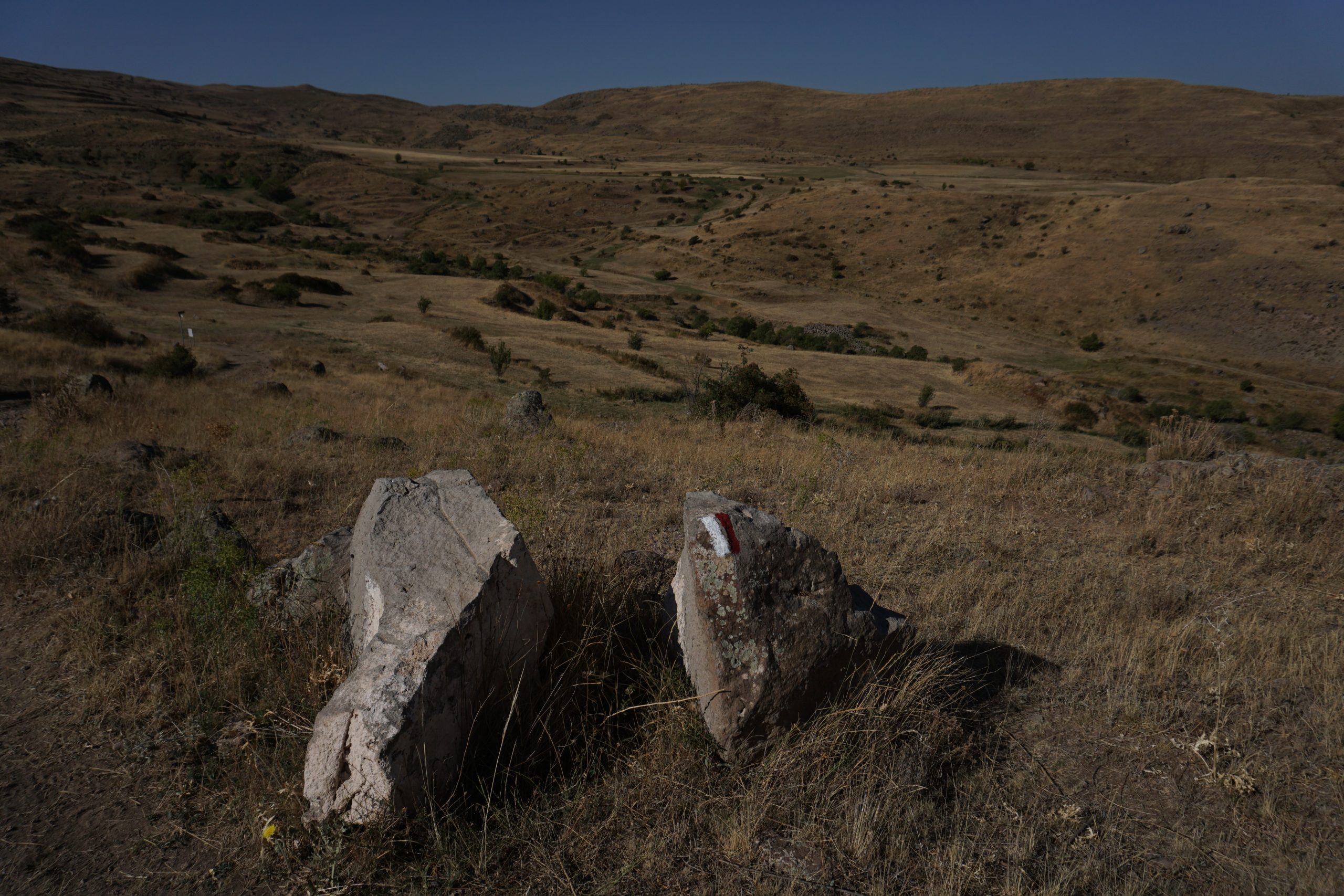 In spring it is much greener, but now the grass and other plants were rather summer withered, but shone ochre instead. I passed Chumov Lake again, but took a different route. I really liked this colour combination of ochre with bright blue lakes and still green trees or bushes. 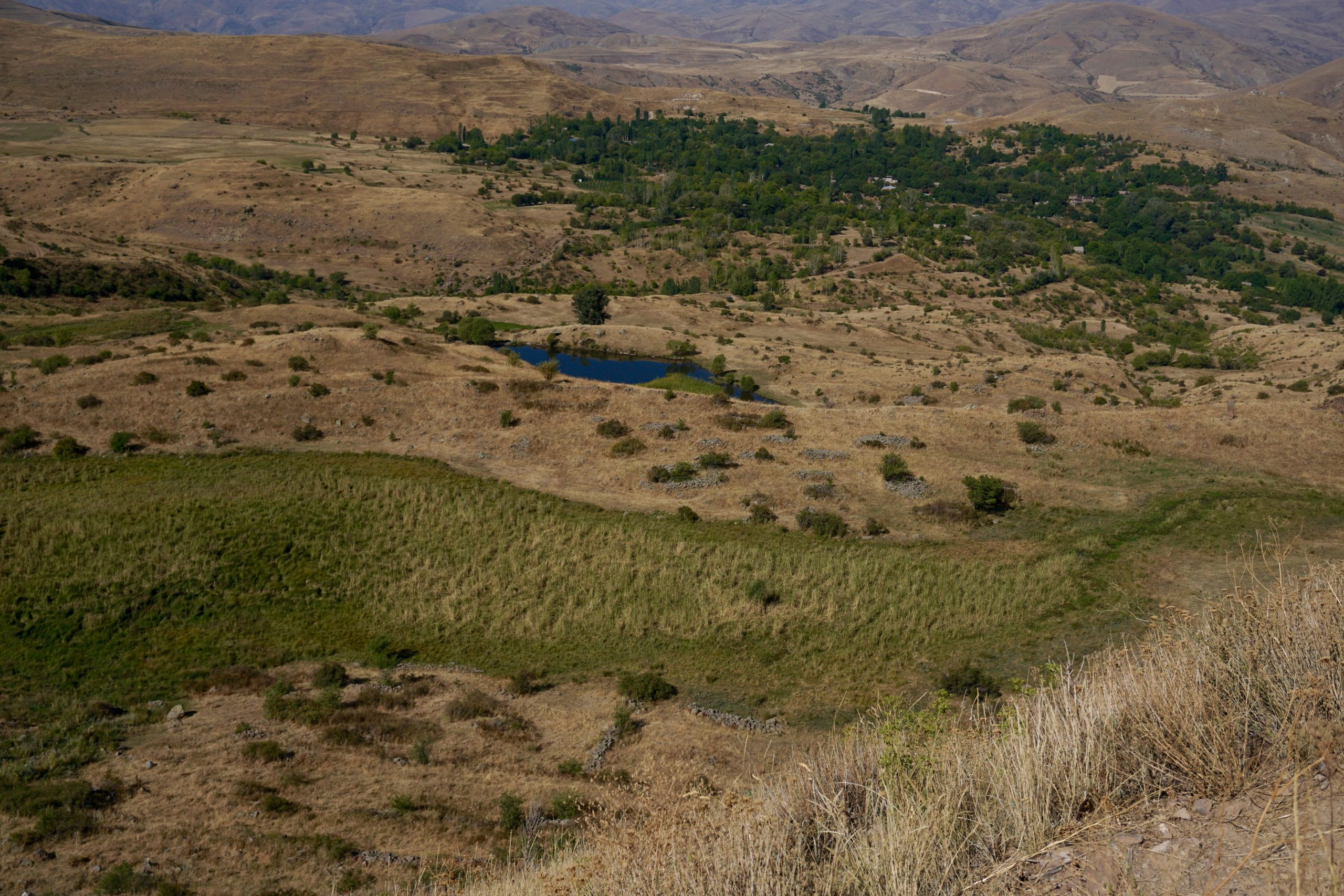 My biggest fear was the Armenian herding dogs (snakes were second and I wasn’t afraid of the rest). Sure enough, I saw a large flock of sheep, dogs running around and about 5 men on horseback right where my hiking trail was supposed to be. Can you make out the little dots? Flock of sheep on the left, horse men further on the right. 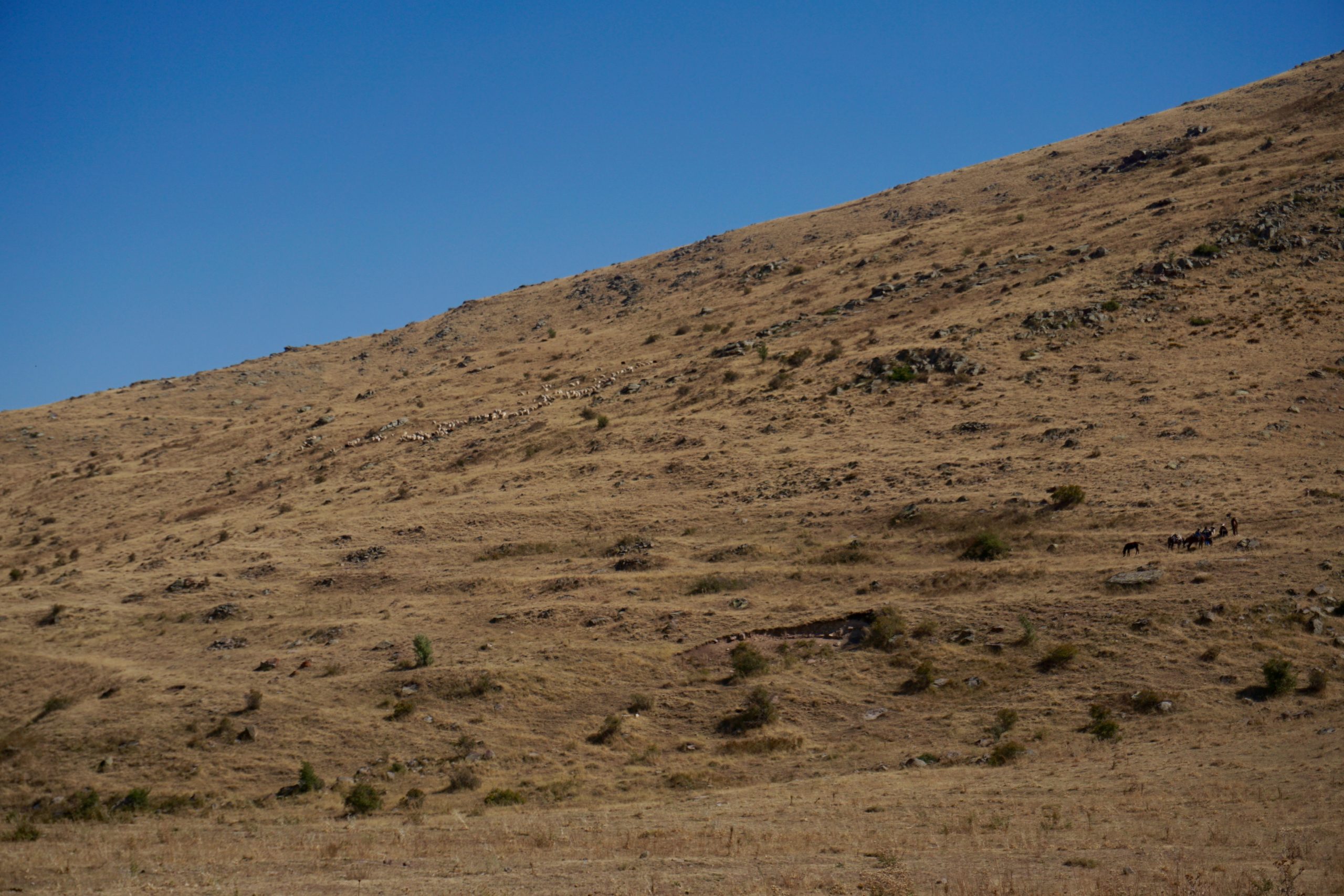 A flock of sheep and a troop of riders are hiding in this picture. Can you spot them?

Strategy: wait and see, they have to move on at some point. I waited and waited and watched – nothing. They stayed where they were. 2nd strategy: run a wide arc. The landscape allowed it and I took off. Then a rider broke away from the troop and trotted towards me. A bold-looking guy with a lot of black beard and a cap. I said where from and where to – and he talked and talked and I couldn’t understand a word. Sometimes he made signs like eating or pointed to his saddle. I shook my head. He kept talking and talking, half circling me with the horse, I tried to go my direction – and then it tipped and I felt very uncomfortable. All alone in this landscape, with only other riders and treacherous Armenian shepherd dogs nearby. He had to notice that I felt so uncomfortable and if he was a nice person, he would just ride away! What would have better consequences: shouting or crying? I did neither, but chattered away and tried to go my way undeterred. And at some point he rode off.

I told HikeArmenia afterwards: People in the countryside never want to do you harm, they rather want to do you good. He didn’t understand that you just wanted to go on alone. Why didn’t you call me???? Aaaahhhh – that’s so stupid, I didn’t even think of the obvious solution, even though I had her number saved. And there was reception everywhere. Sometimes it’s really difficult when you just can’t interpret the situation, when your own background only gives you different explanations than those of the other person!

Anyway, I was relieved when I had the flock of sheep, dogs and riders behind me. 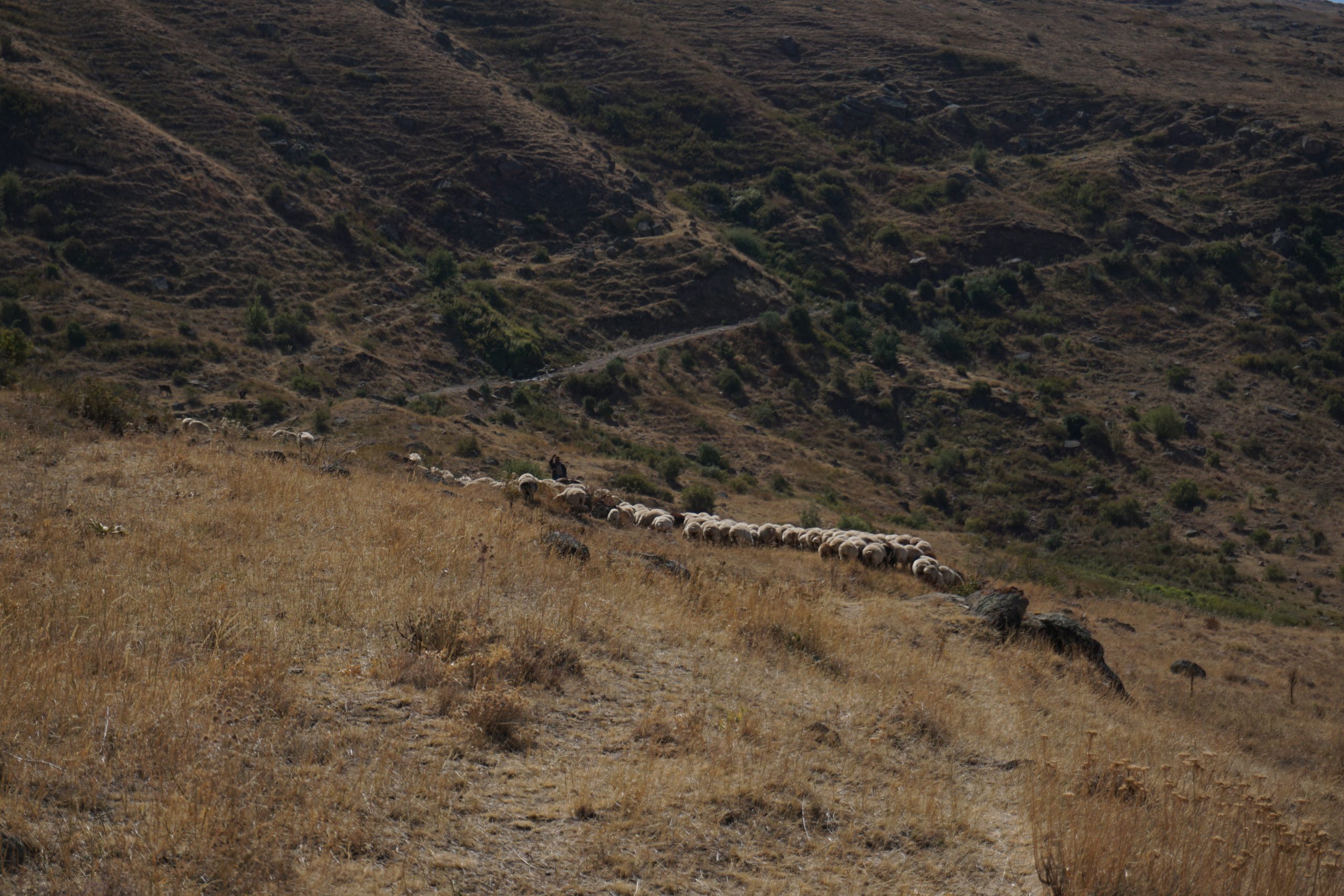 Flock of sheep from behind

Relieved, I continued on my way, enjoying many views. I went far up, but there was still mountain above me. 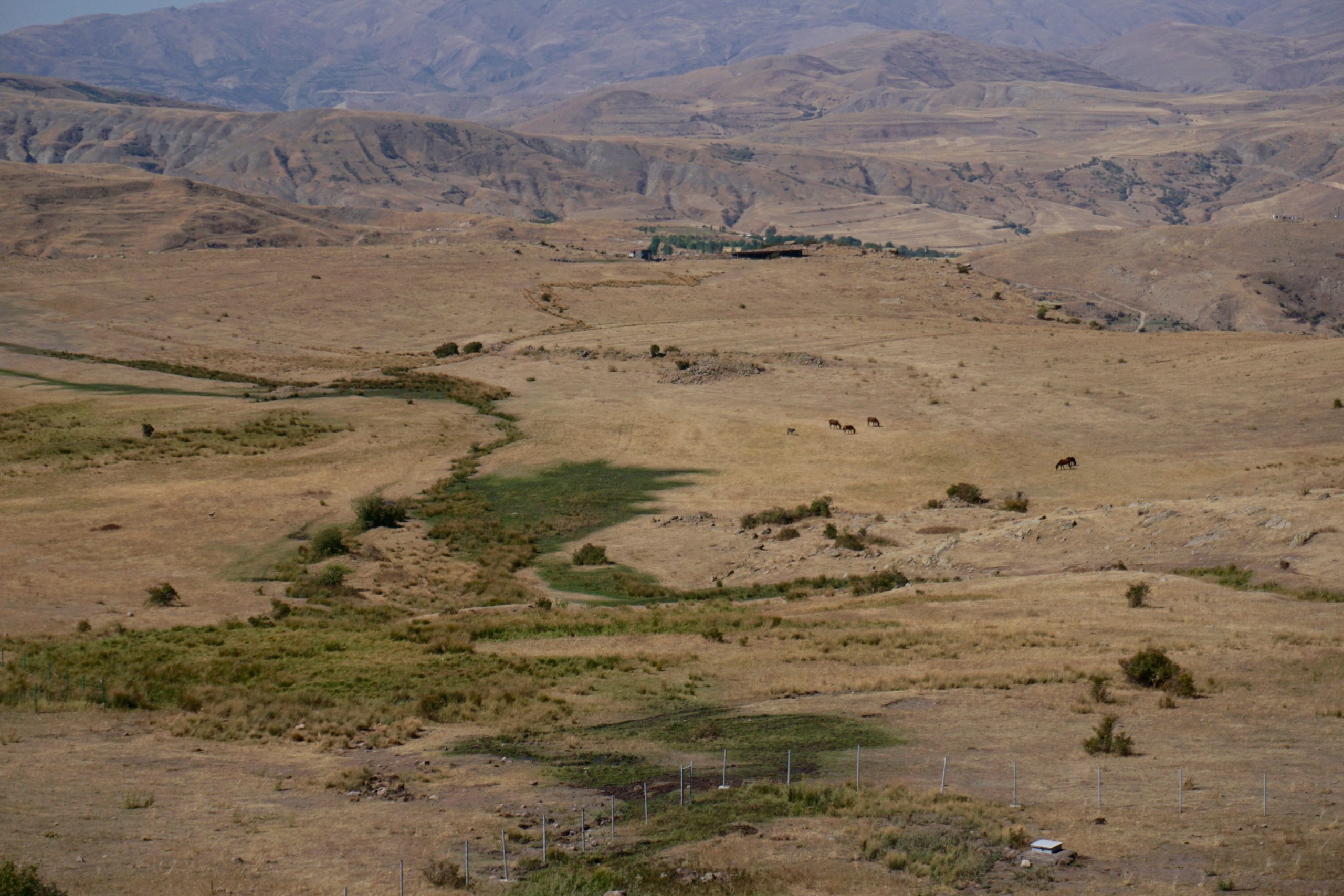 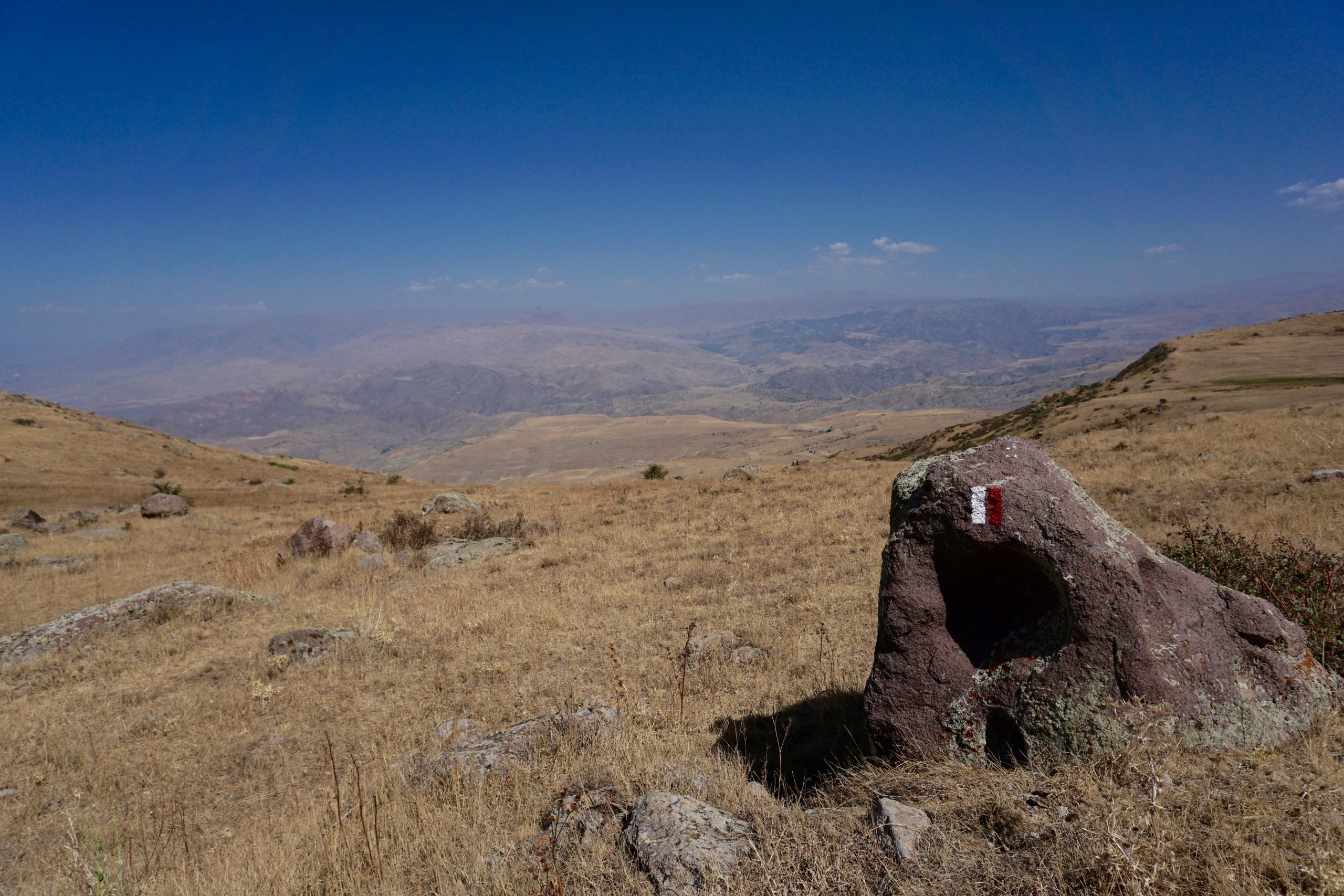 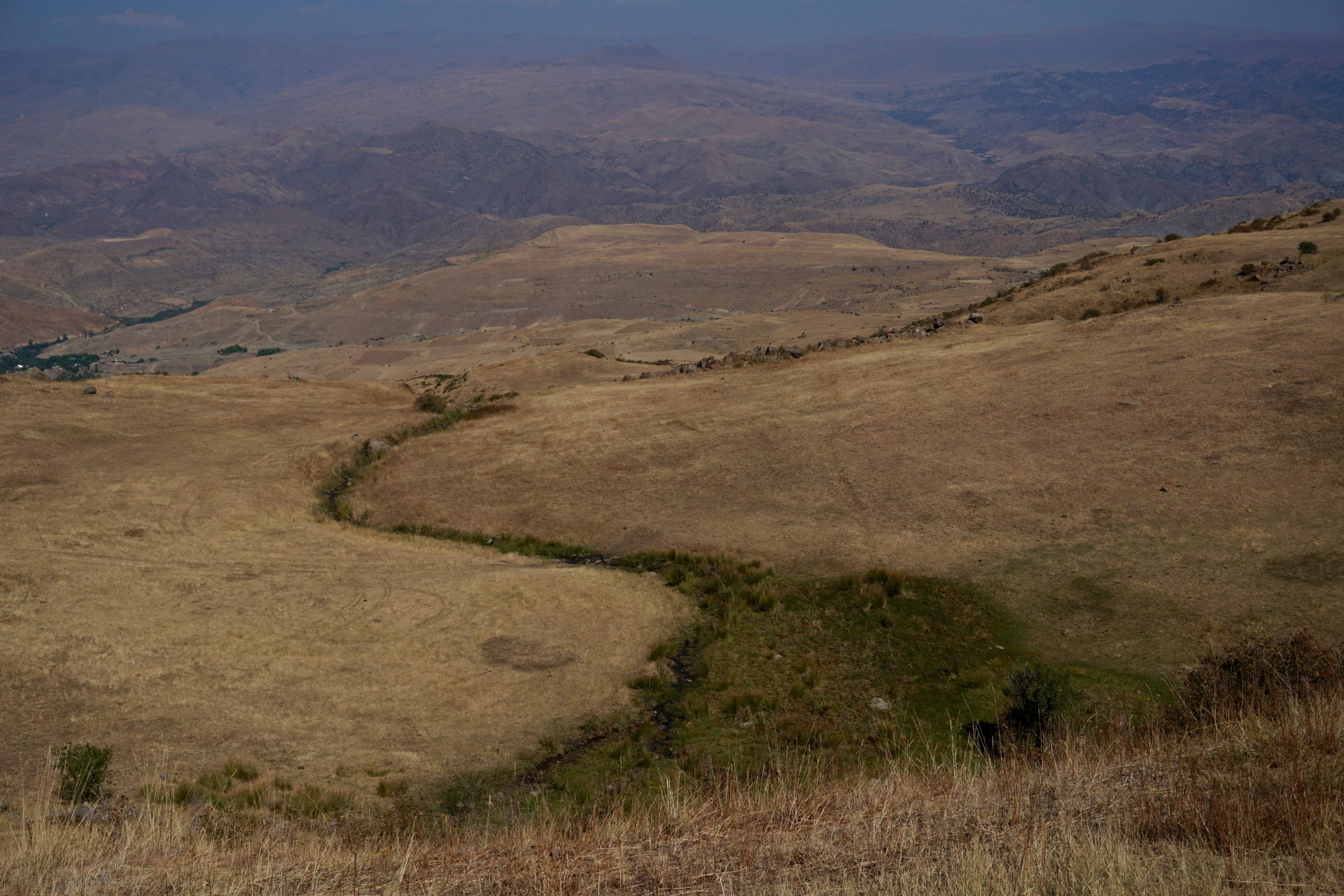 I then came to a cattle watering place: 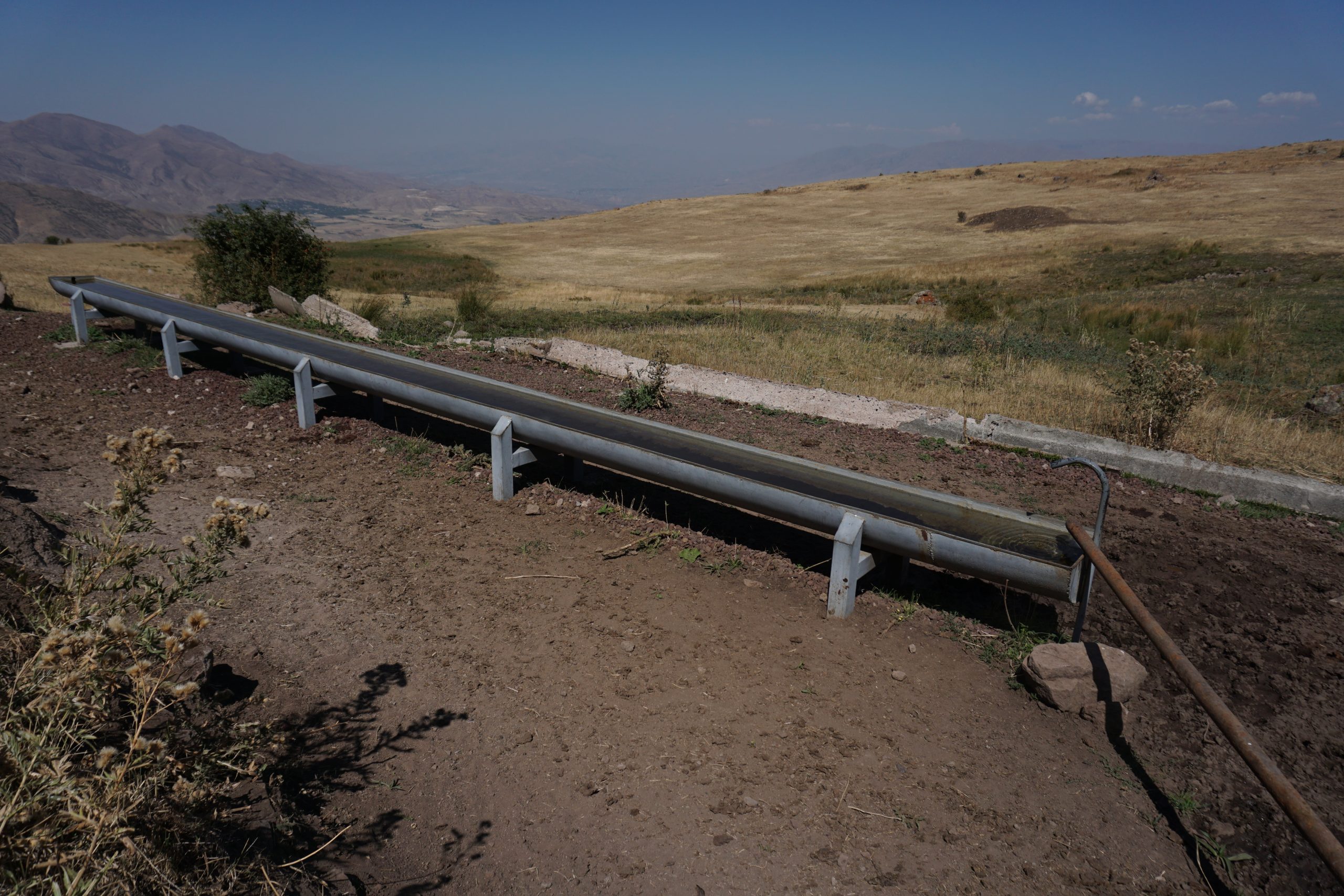 cattle watering trough without cattle, but with great landscape in the background

The water was not only in the watering trough but had also soaked the ground on the hiking trail and instead of walking around it, I thought it was firmer and walked right through or into the mud and was fortunately able to keep on my two feet, but the bottom was well muddy. I didn’t take a photo of it.

I took a break for lunch, the mud dried and I spotted my destination in the beautiful landscape: Gomk. 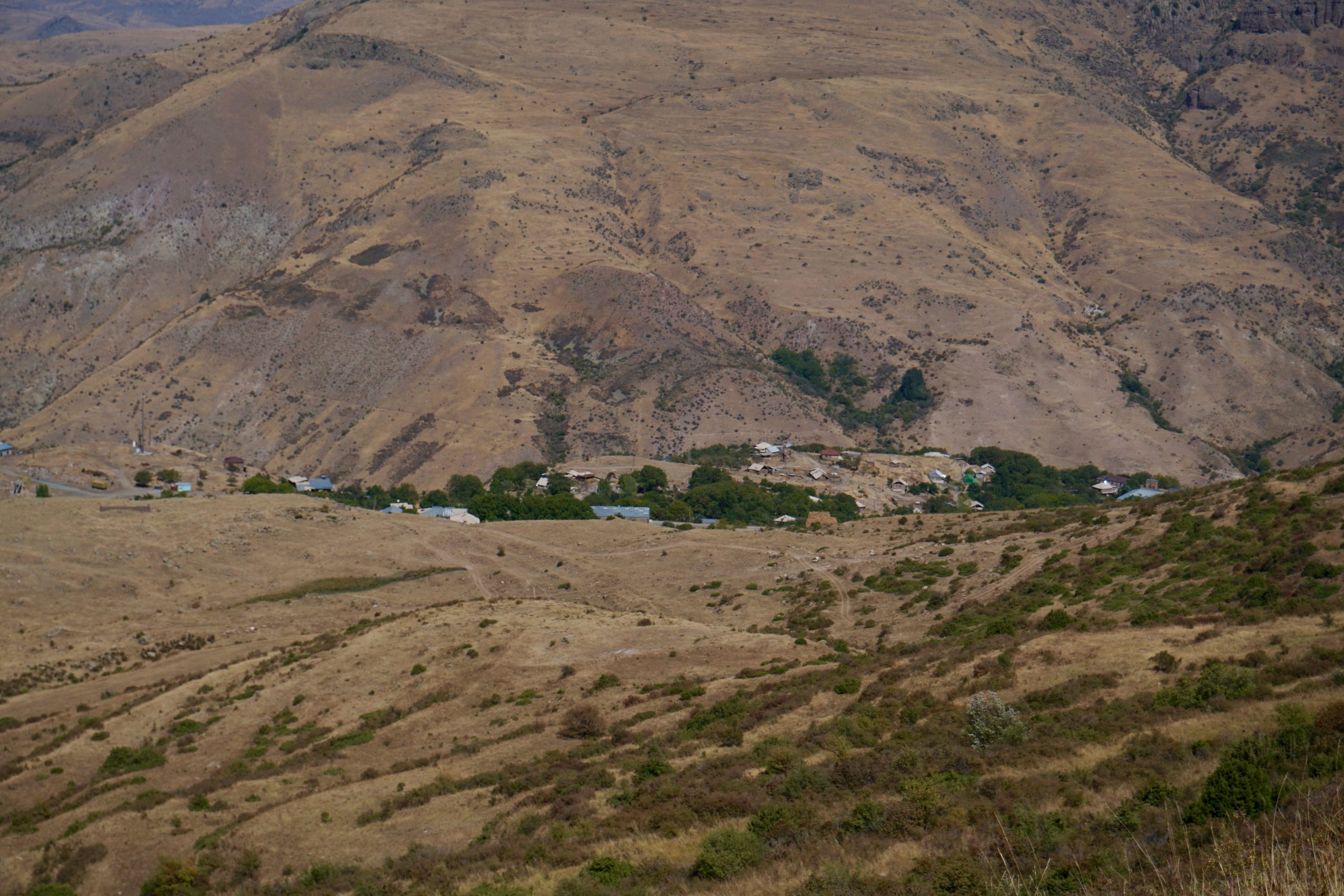 The way down through the great landscape was also fine. In Gomk I had pre-booked accommodation – with the head of the village school. Surely she should speak good English? However, our correspondence in advance was a bit strange, it seemed to me that her translation help had a mind of her own. The route was about 12.5 km long, I had taken my time and arrived at about 16:30. Mrs. Leiterin didn’t speak any English, but she quickly made up the bed and her mum was busy in the kitchen, and suddenly I had a beautiful meal on the balcony with a great view in front of me. Hmmmm, it was still before 6pm – was that supposed to be dinner already? Or would there be something else? Should I eat my fill or leave plenty of room? I decided to take the middle course. Here is the food: 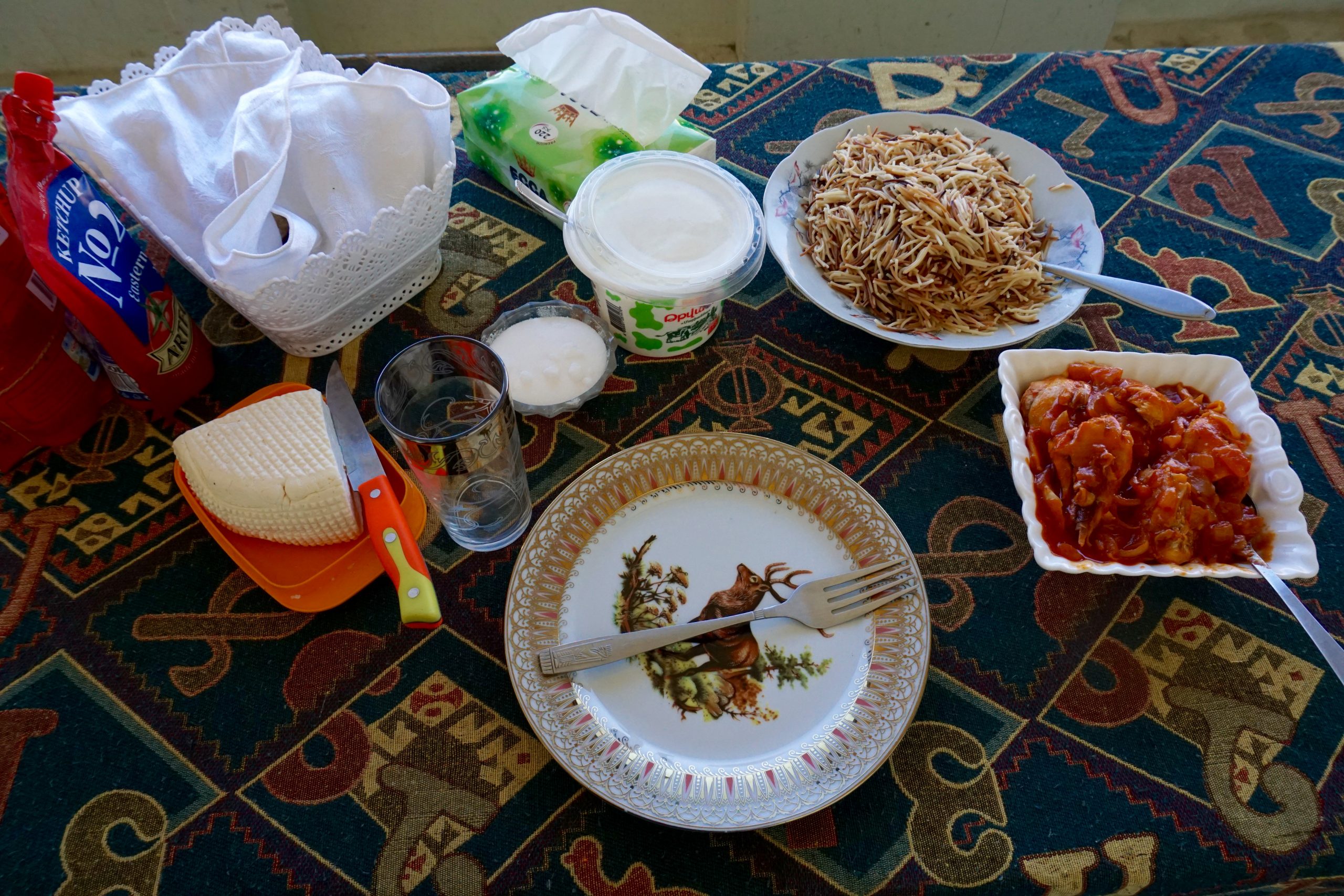 By the way, there was nothing more later. HikeArmenia also enlightened me about this: people think that if you come from hiking or at all, you must be fully famished and then serve you the meal that is closest. So better arrive later if you don’t want to have dinner too early!

The stay here was OK, but not as cordial as the night before. There were also interesting little observations:

Here is a picture of the headmistress with her mother. 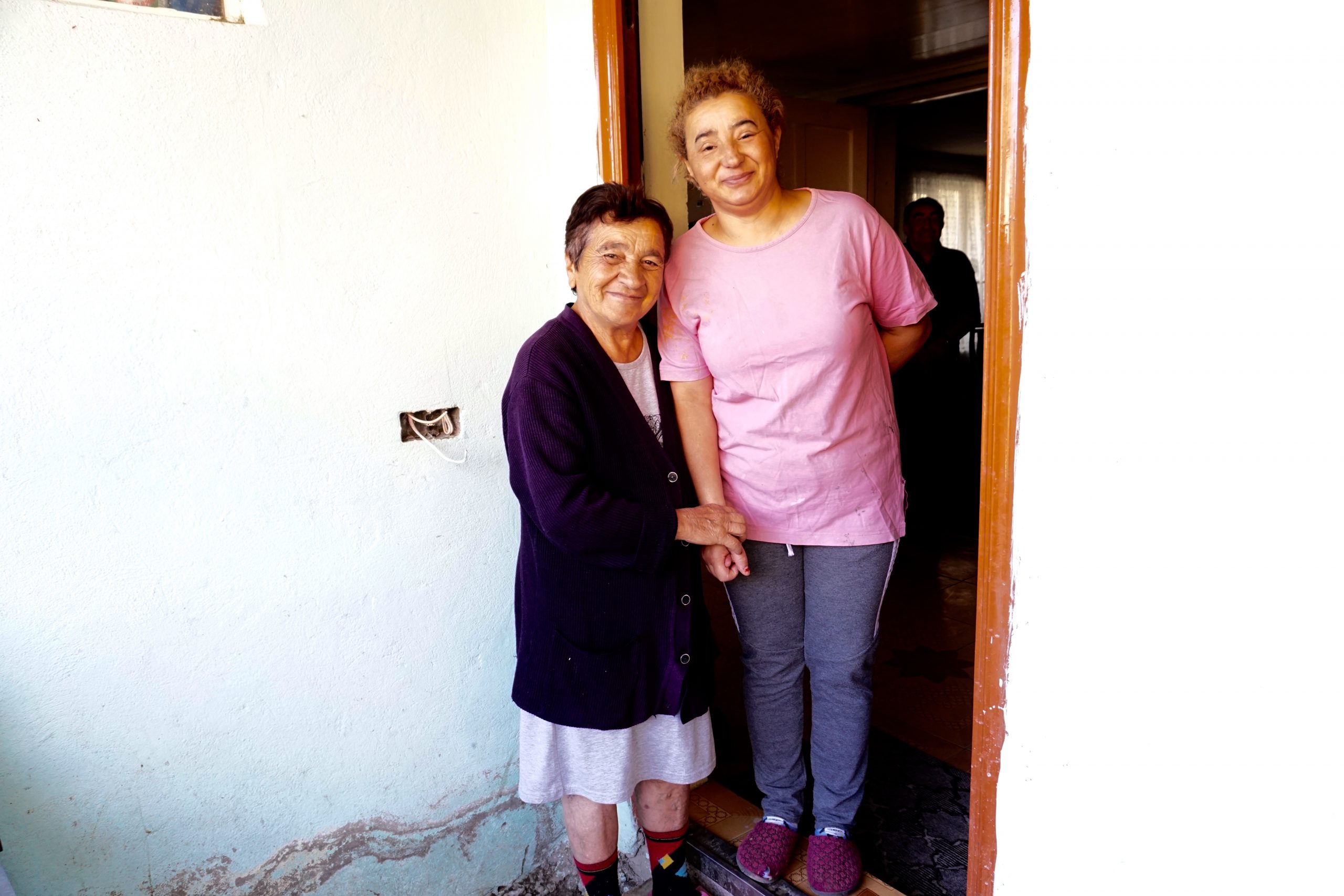 And that was pretty much it for the day.