The minibus, with which I drove back to Yerevan had a german writing 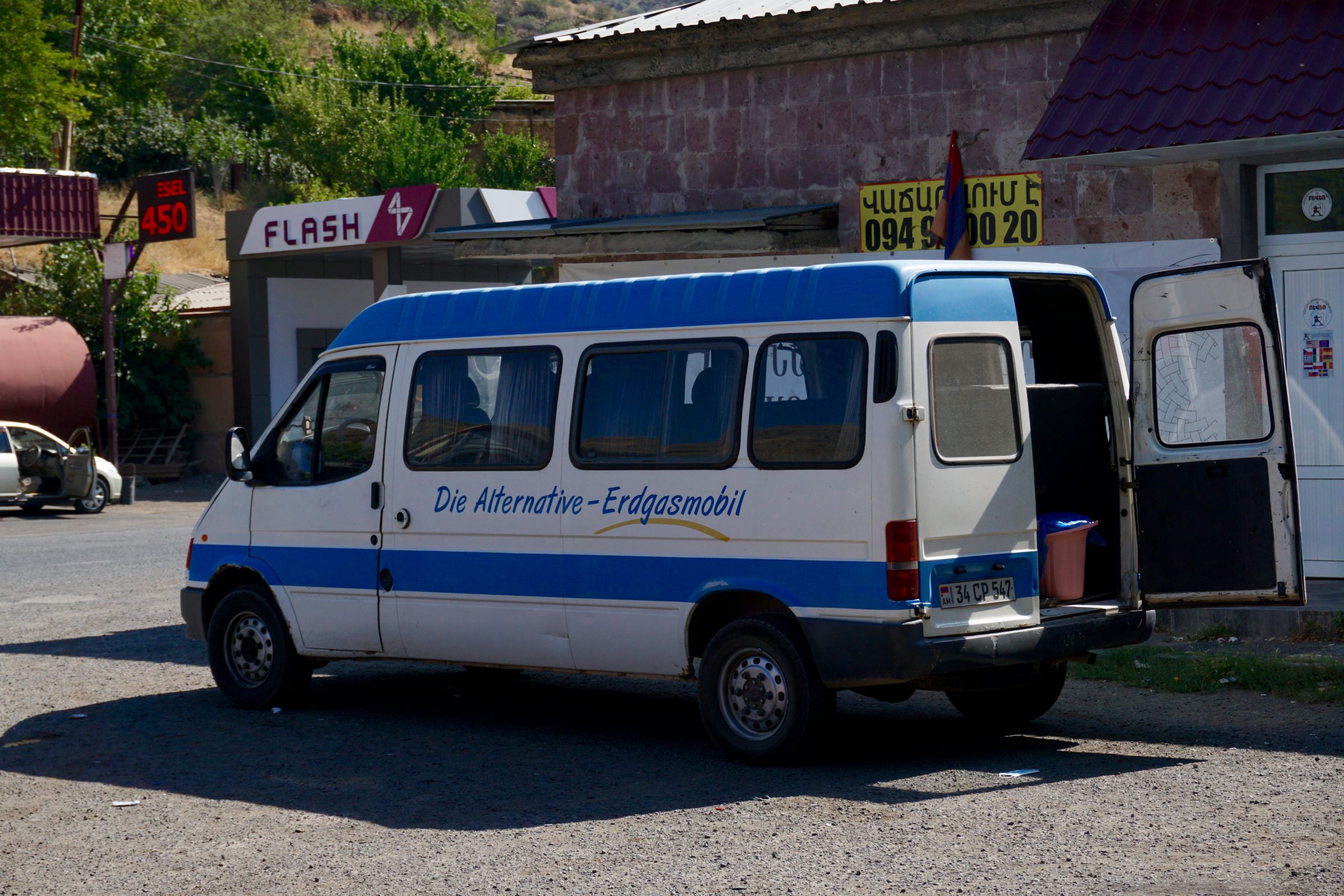 There are quite a few cars here with German lettering, more than with other European languages. I also find this one very beautiful: 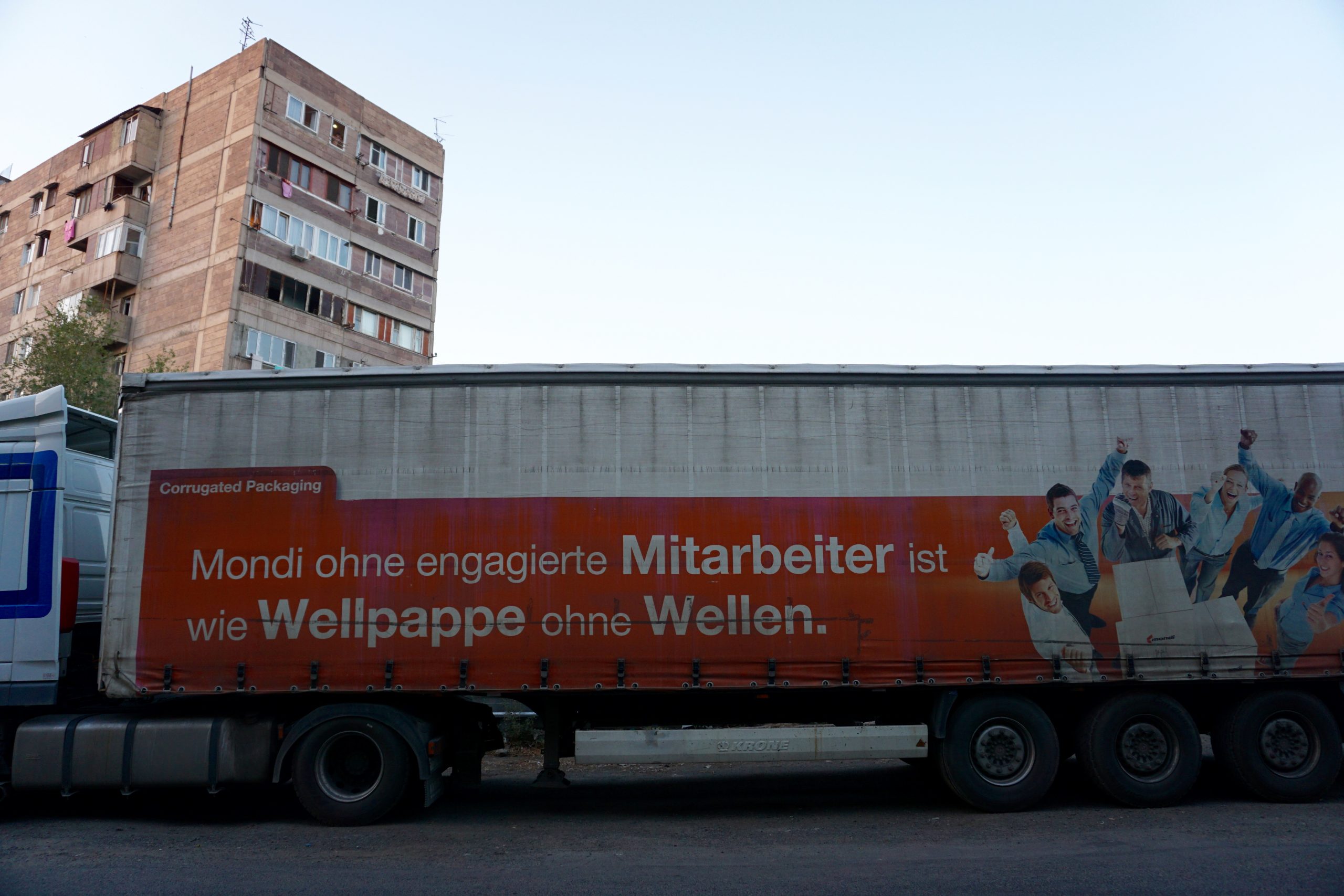 I didn’t see quite as many German companies. My Yerevan hostess has a great washing machine from China. As far as appliances go, Chinese products seem to be very popular. Here is a Bosch after all 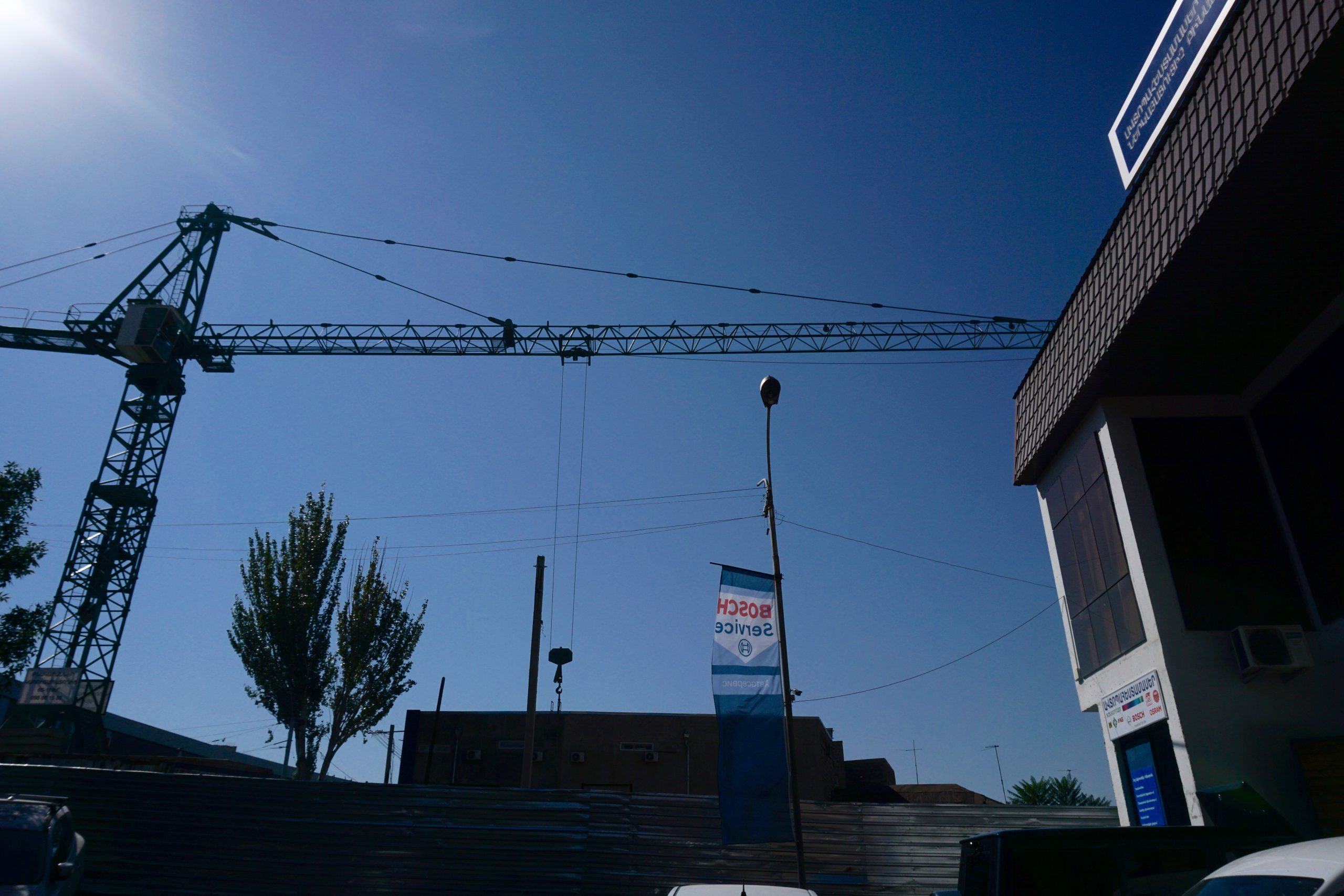 Proclaiming my country usually results in a thumbs-up. The more accurate term “a village in Bavaria” usually draws a grin to broad laughter with a drinking gesture and a “Bier” (or “beer”).

So I spent another day in Yerevan. It was filled with conversations. First I went to Tamara from HikeArmenia to report and plan the next trek. Tamara was born in Armenia, her family moved to Belgium when she was a teenager and she lived there for a long time. She went back to Armenia in 2016 and doesn’t regret it one bit. Her colleague, who wasn’t there at the time, lived in the USA for a long time, but doesn’t want to go back either.

Then I met Liana, the daughter of my hosts in Martiros, with whom I spoke on the phone in German at the time. She studied in Germany, but then decided to come to Armenia. She is now the head of the news department at Radio Yerevan. 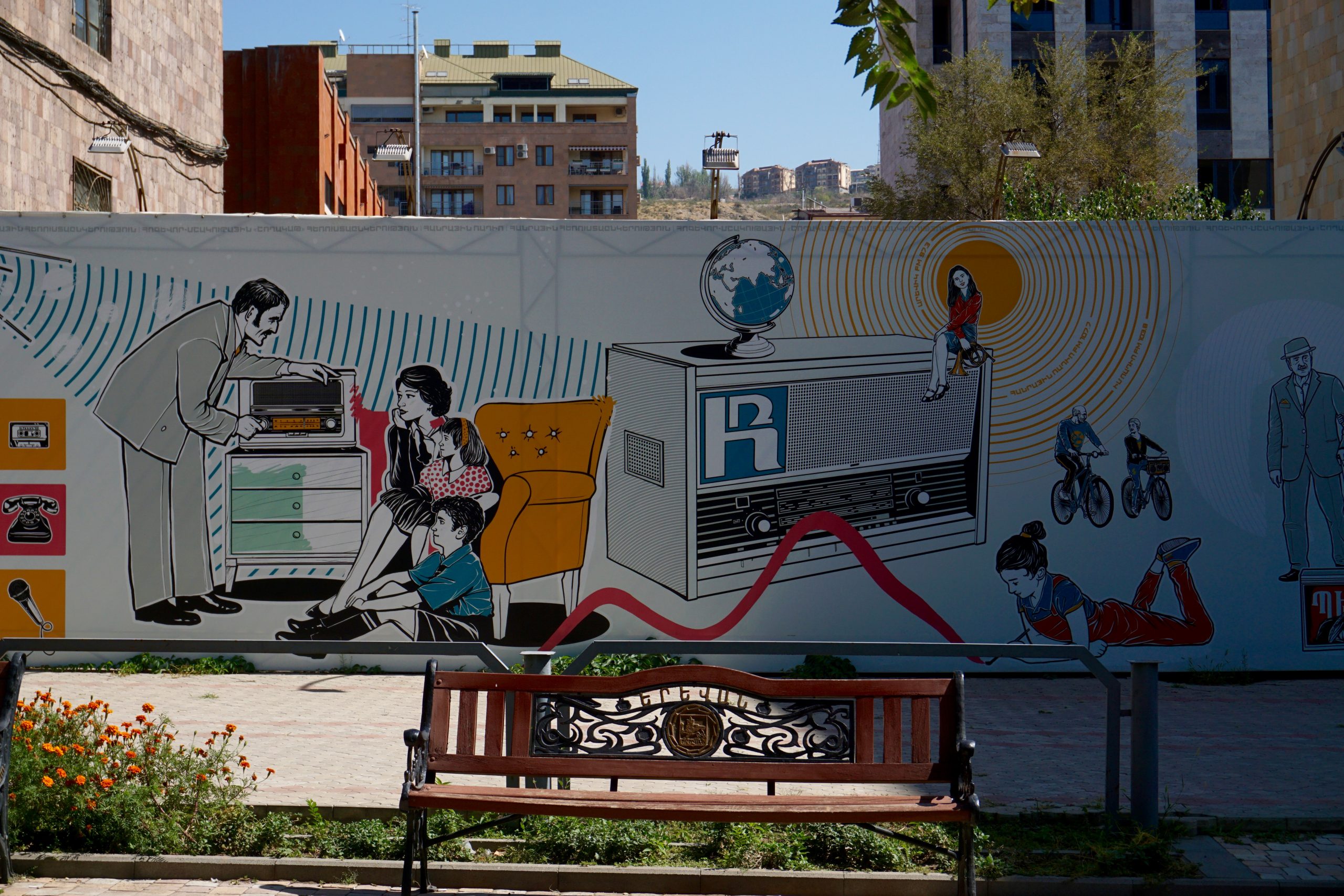 Wall at the entrance of Radio Yerevan

It seems that more and more younger people are very committed to moving Armenia forward. Economically, things are not looking so great, there was a lot of stress with the previous very corrupt government and then the problems with the neighbours Turkey and Azerbaijan. Not exactly what some people want as a homeland. But if out of 10 million Armenians, only 3 million live inside, that number can happily increase, there is room enough. And it sounds as if Armenians are very conscious of their roots. But often they just enjoy the better economic conditions elsewhere.

In the evening, I was back at my hostess Armine’s place. There had also been a young American woman for a few days who was behaving a bit strangely. That evening it escalated and after several loud arguments (I didn’t quite understand what it was all about) she had to leave the house. She complained that she didn’t feel welcome – judging by her demanding and belligerent behaviour, she wasn’t anymore). All the time I didn’t know whether I should get involved (I still don’t), but I let it go. At some point she was gone and Armine and her mother were exhausted. They had never experienced that before. They have only been doing this for 2.5 years with a long break from corona and it is so right in their flat, you share the bathroom and toilet and simply get to see a lot of each other. And when you as a guest are more demanding than grateful that someone lets you so far into your own life, then it crashes. It was also exciting to see how the American not only threatened to give a bad review, but also placed it right away and how much the hostess resented that because she is so dependent on the rating. I actually always look at them before I choose (everything here is actually done via Booking.com – Airbnb and own websites are not so popular).

In between these conversations, I also walked around Yerevan and marvelled at the “Eastern architecture”. They do have a penchant for monumental concrete etc. 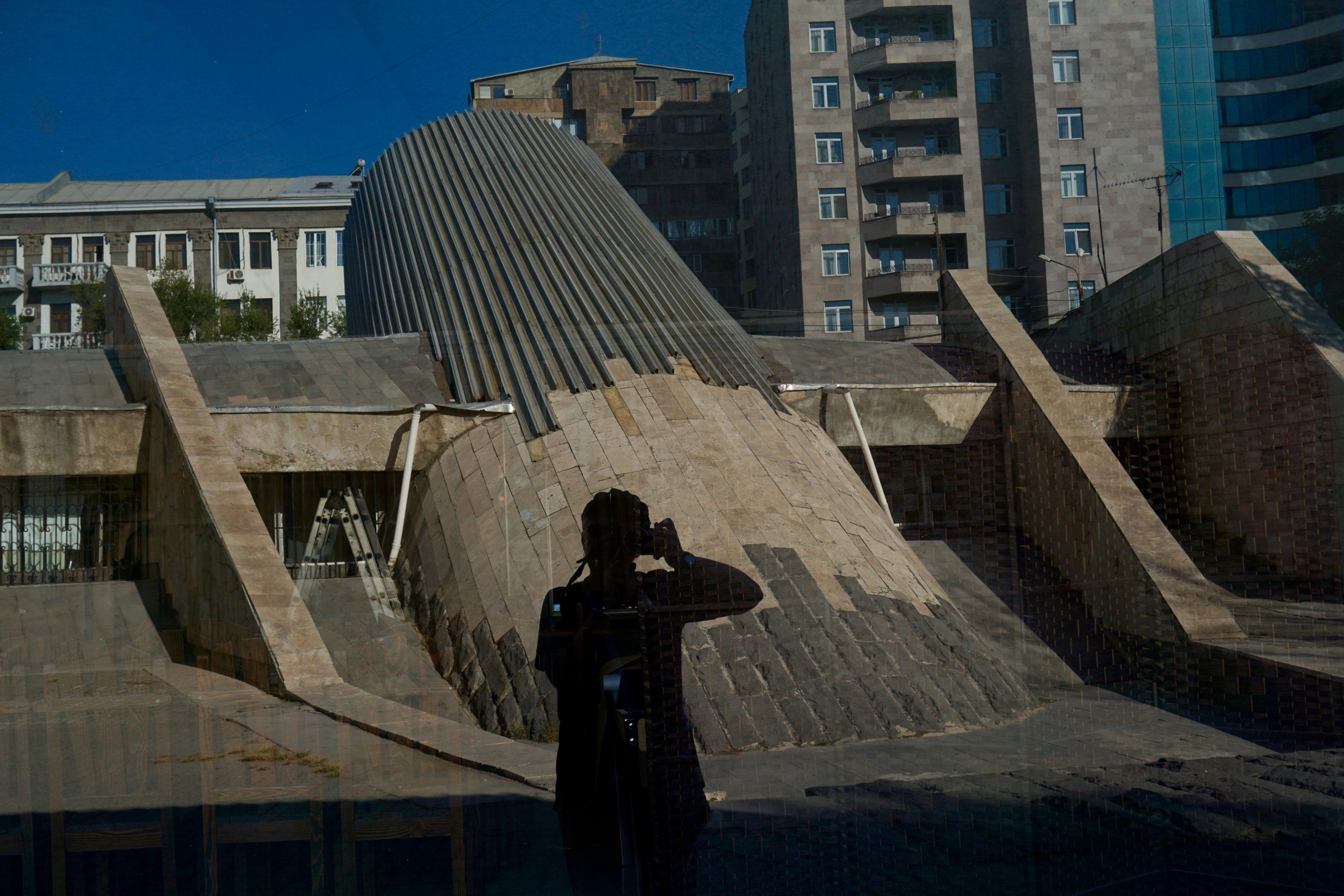 Building and my shadow

A tourist attraction and popular in general are the cascades. A 118 m high staircase complex with 5 platforms with exhibition halls and sculptures. It was first imagined by someone in the 1930s, who envisioned waterfalls, but died in 1936. In the 1960s, someone dug it up again and transformed it with his own ideas. It is a complex system, which is supposed to be a symbol of Armenia’s rich history and culture. It was started in 1971, but before it was almost finished in 1980, there was an earthquake, then the collapse of the Soviet Union, and so on. Only in 2009 was it completely finished.

You can go up and down the escalators inside and from the top you have a great view over the city, including Ararat on a clear day. I was mainly amazed by the “Soviet aesthetics”. At least that’s what I call it. Here are some pictures of it: 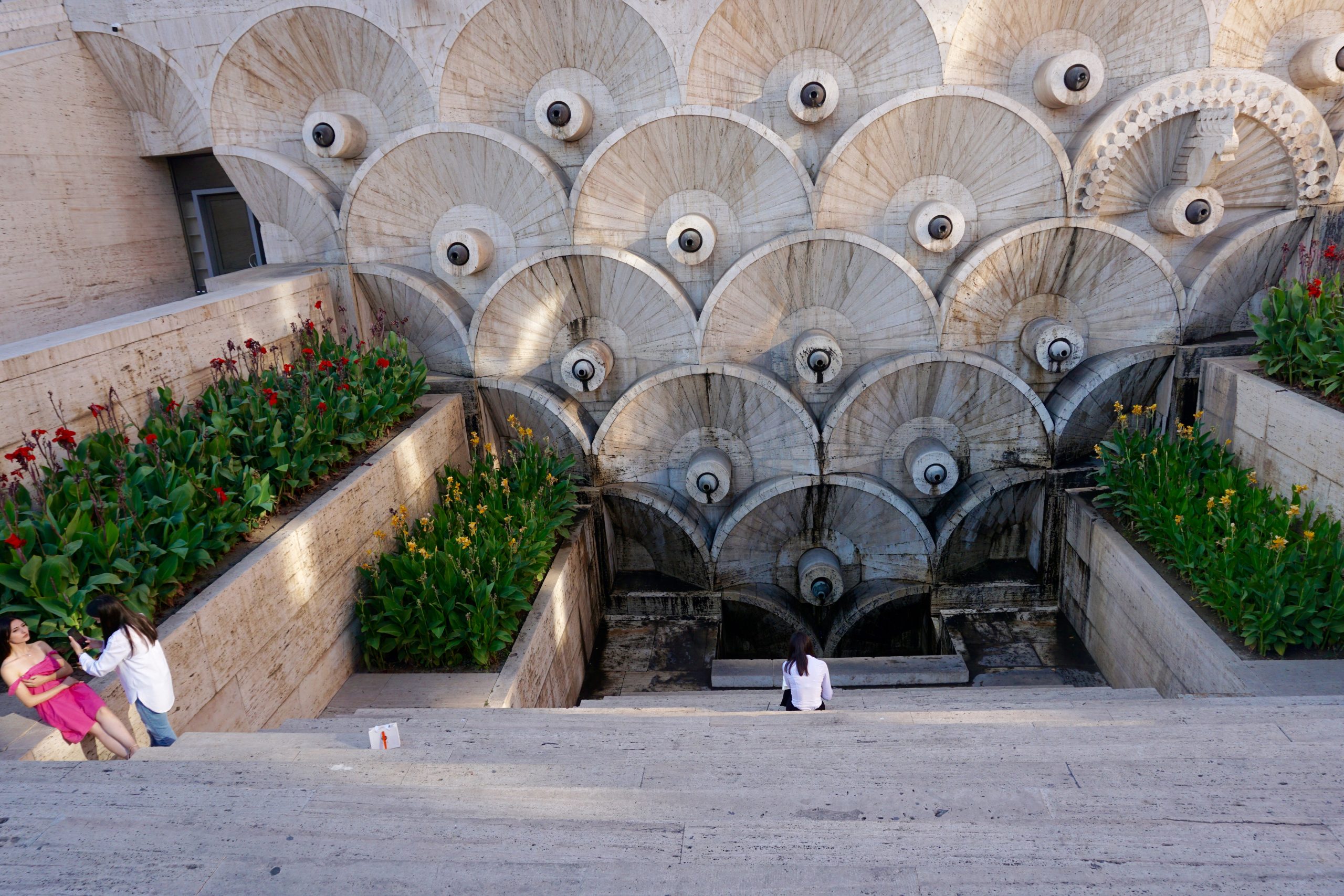 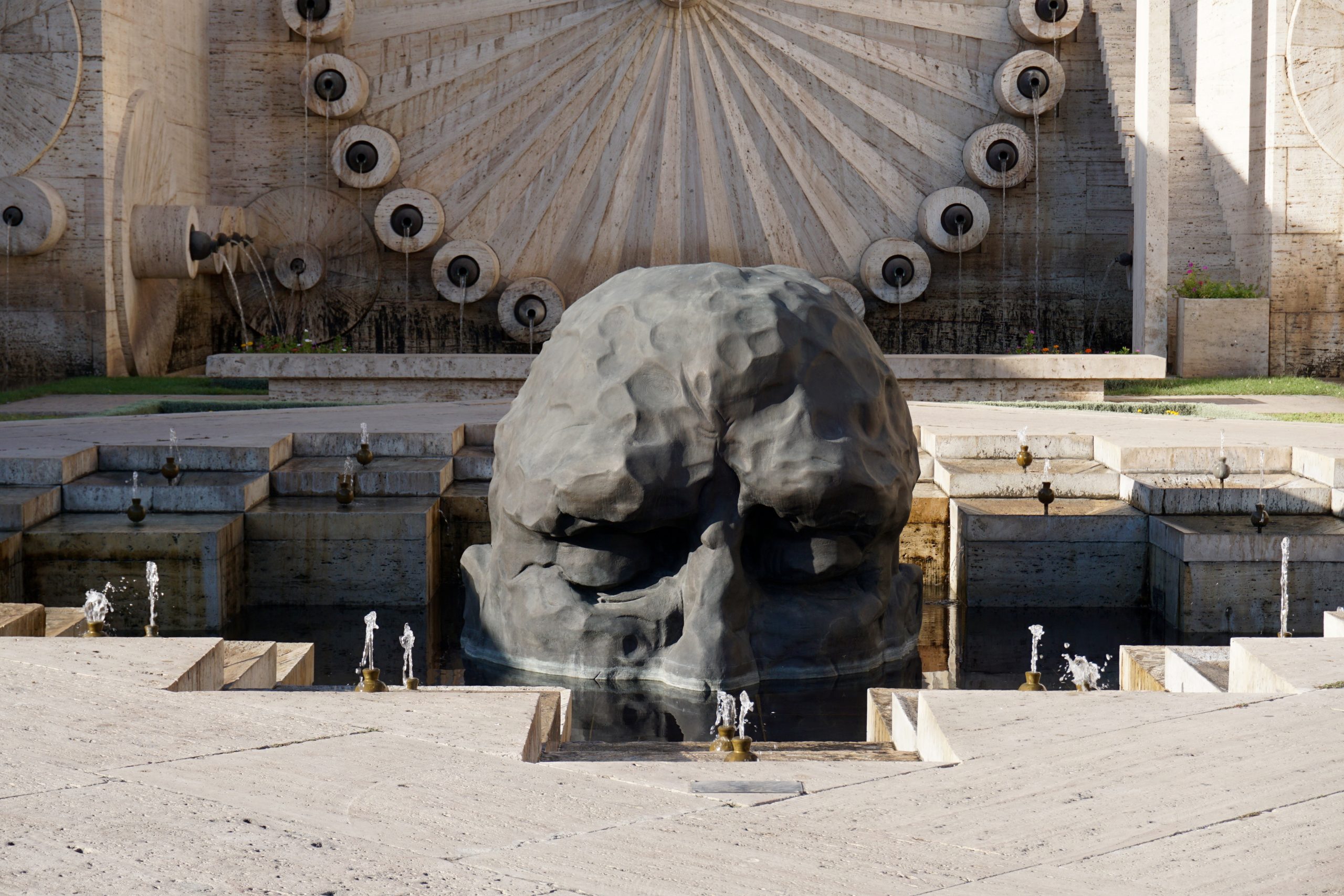 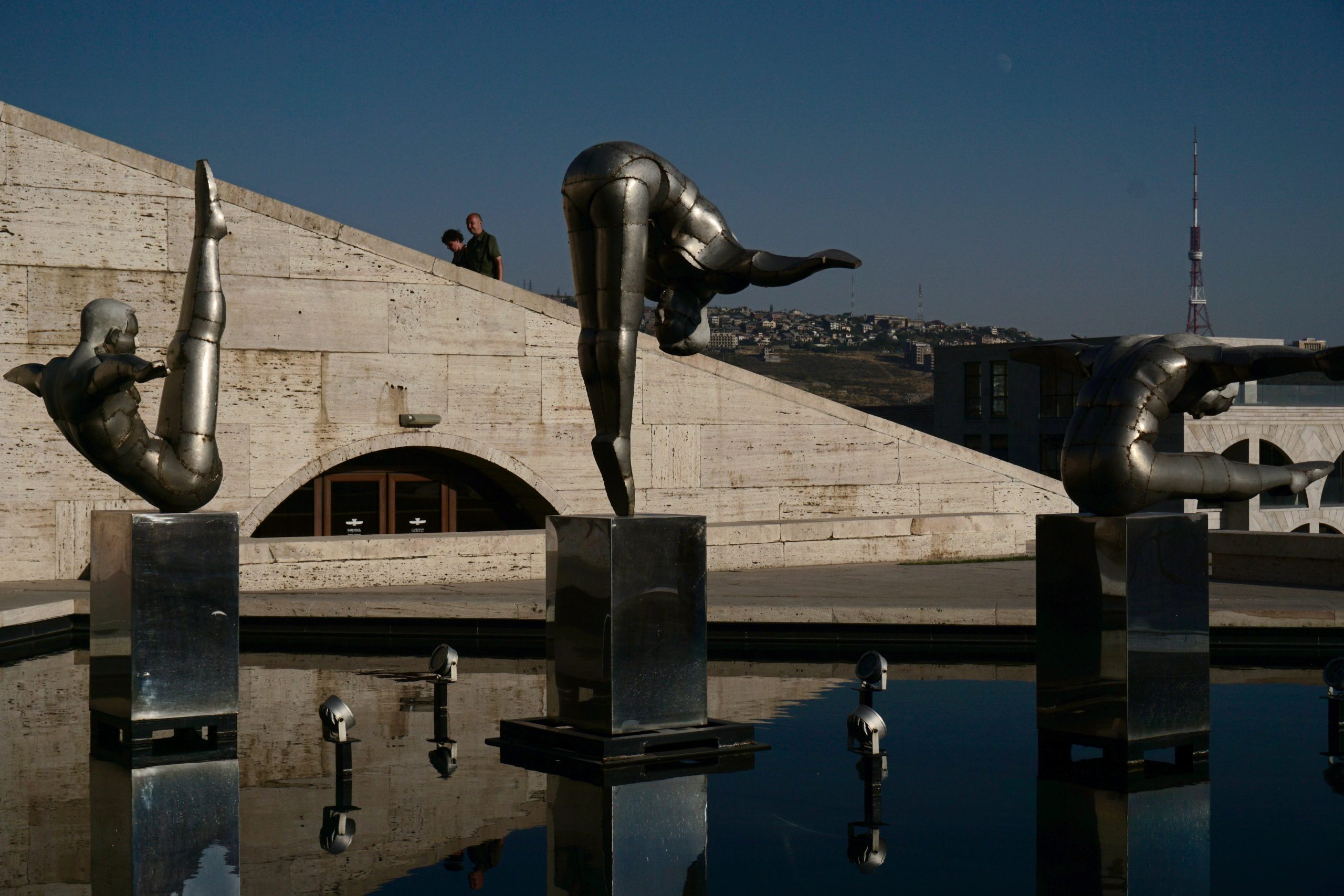 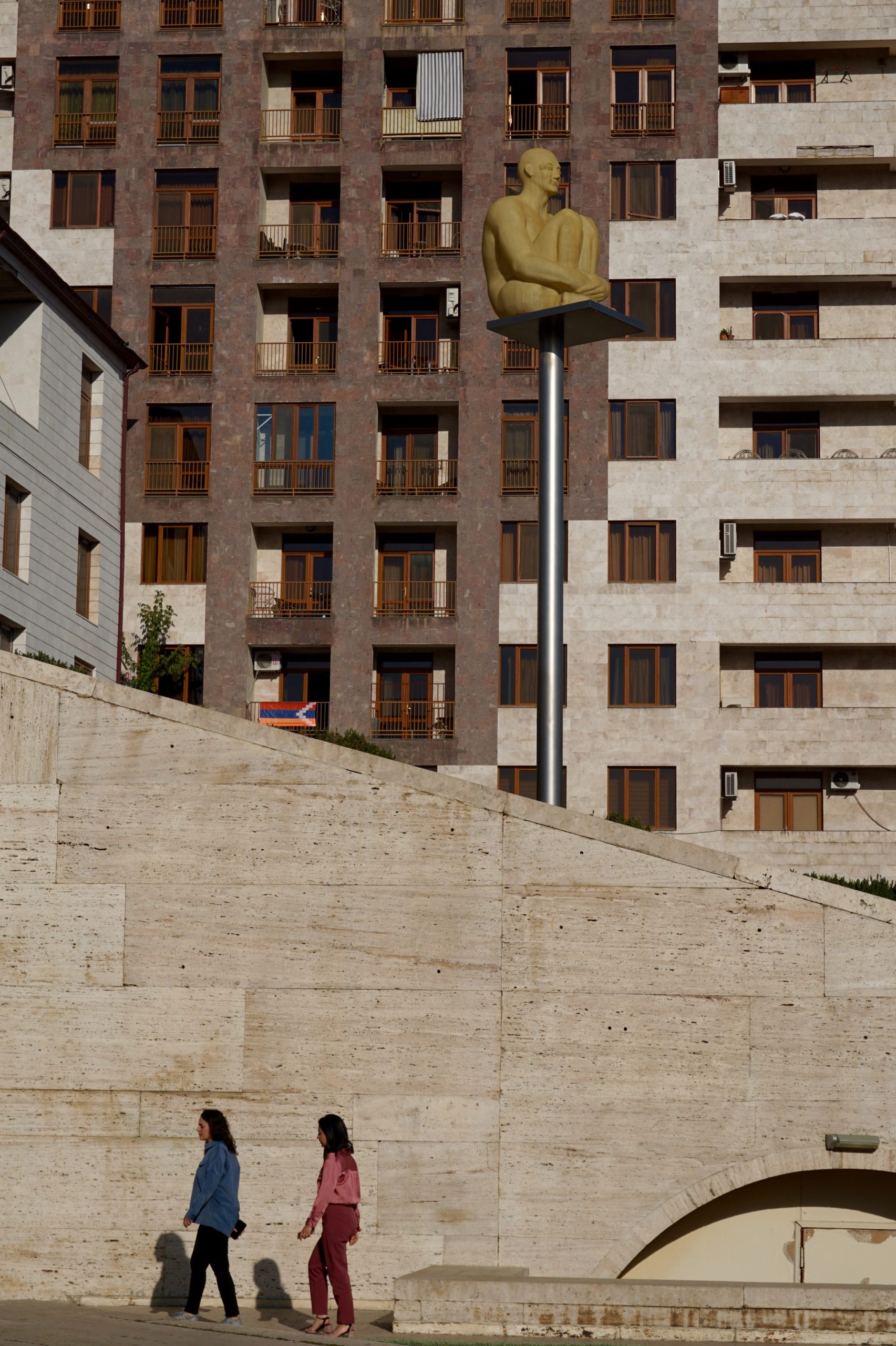 something portrait-size with other buildings 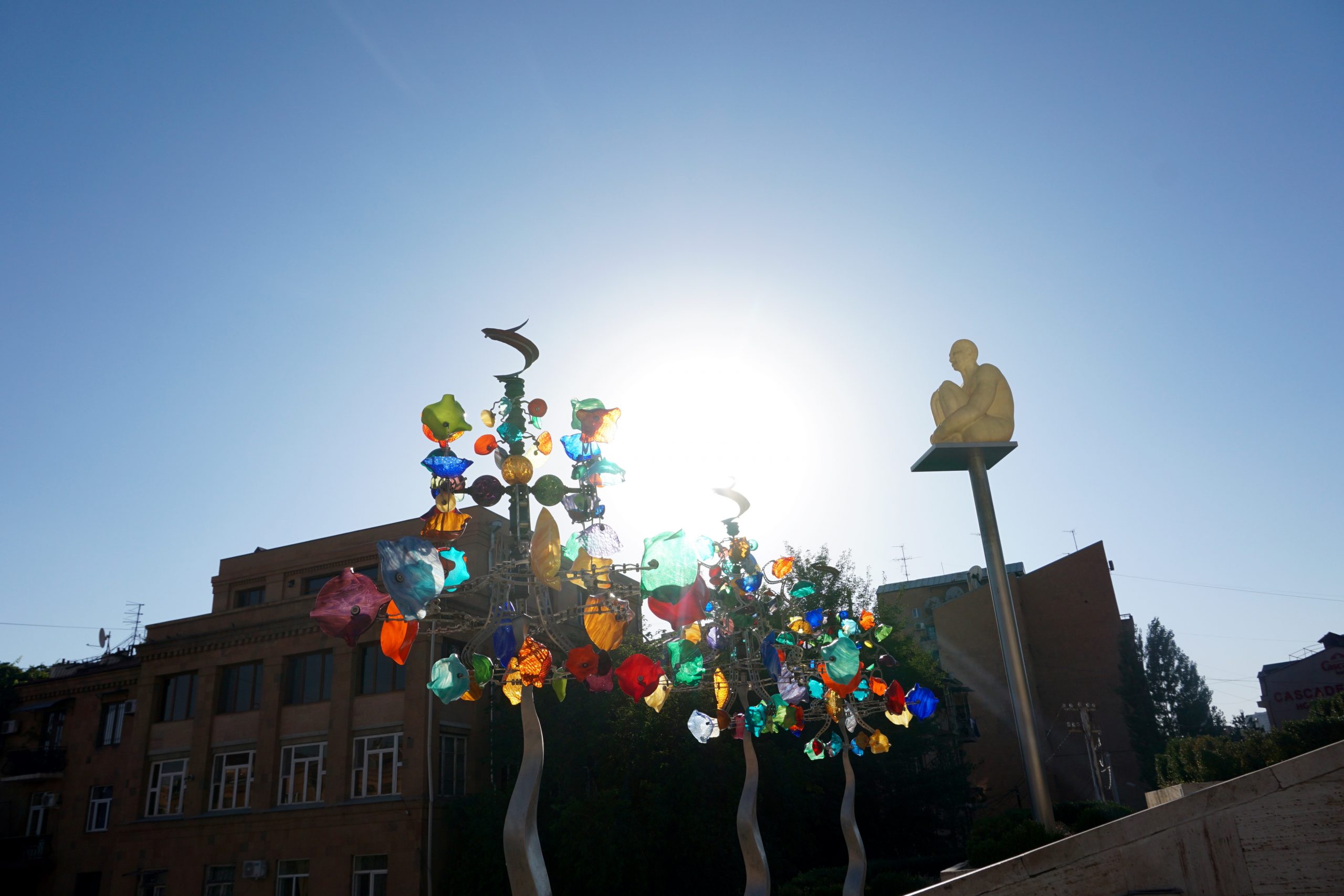 Something beautiful from first platform 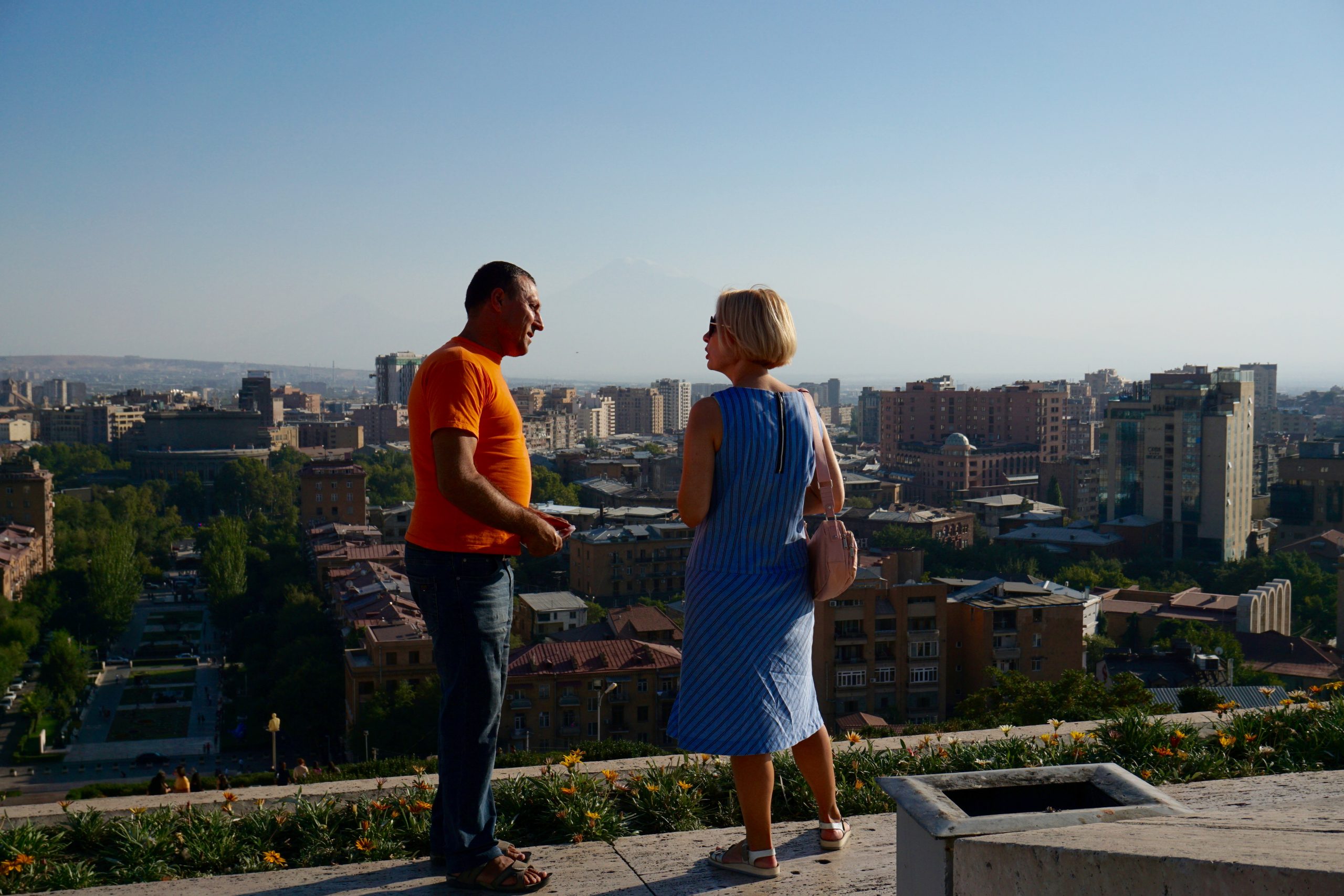 people nearly on top, in the background no Ararat 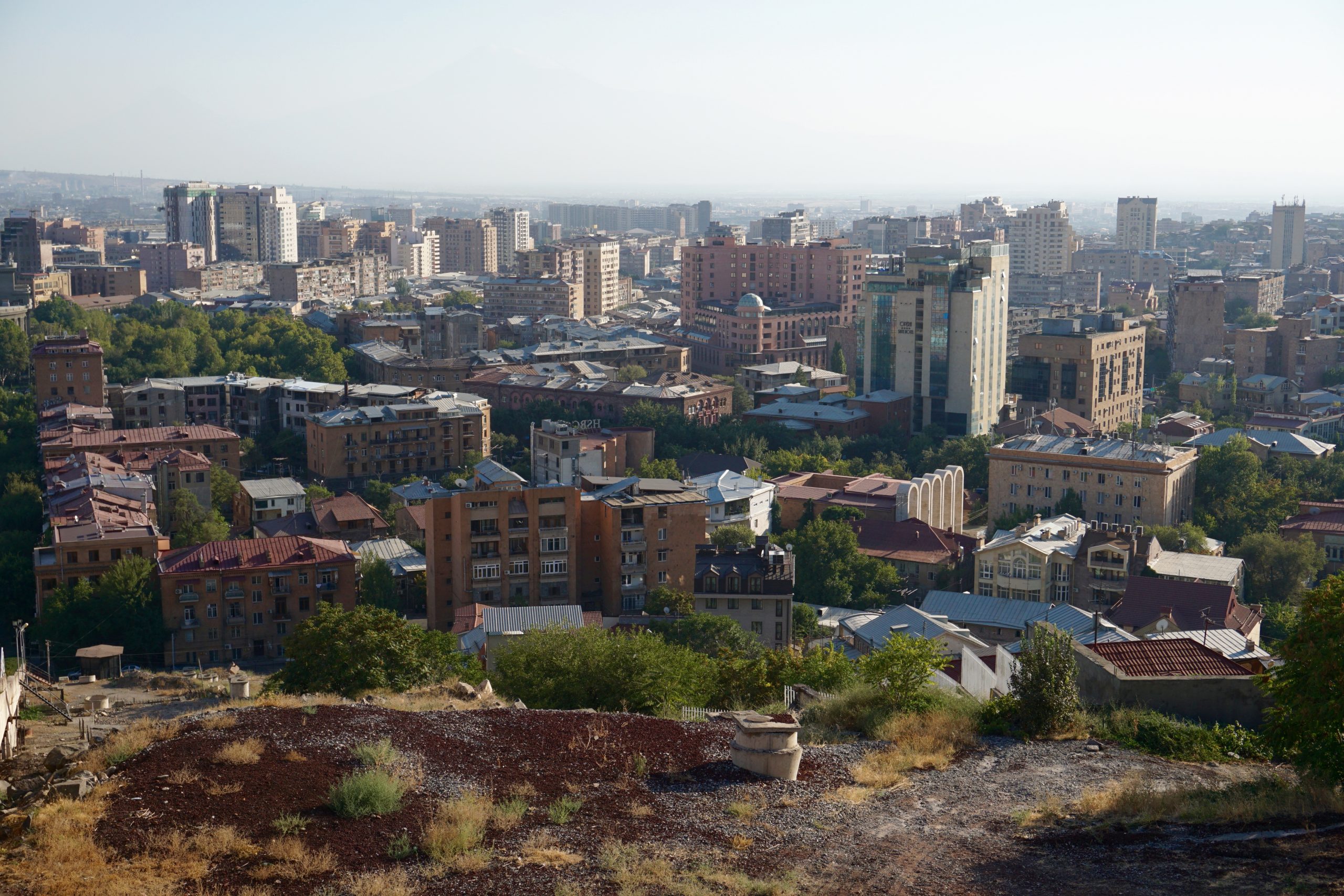 from top without people

And that’s what it was from Yerevan – the next day I headed towards a new trek and don’t plan to come back to the city again.