After the animal market and a last delicious breakfast, I drove to the Marshrutka terminal and there was an immediate departure for Bishkek. My eyes were wide open: only 3 weeks had passed and the city was shining in fresh green! It made a huge difference compared to my first visit. 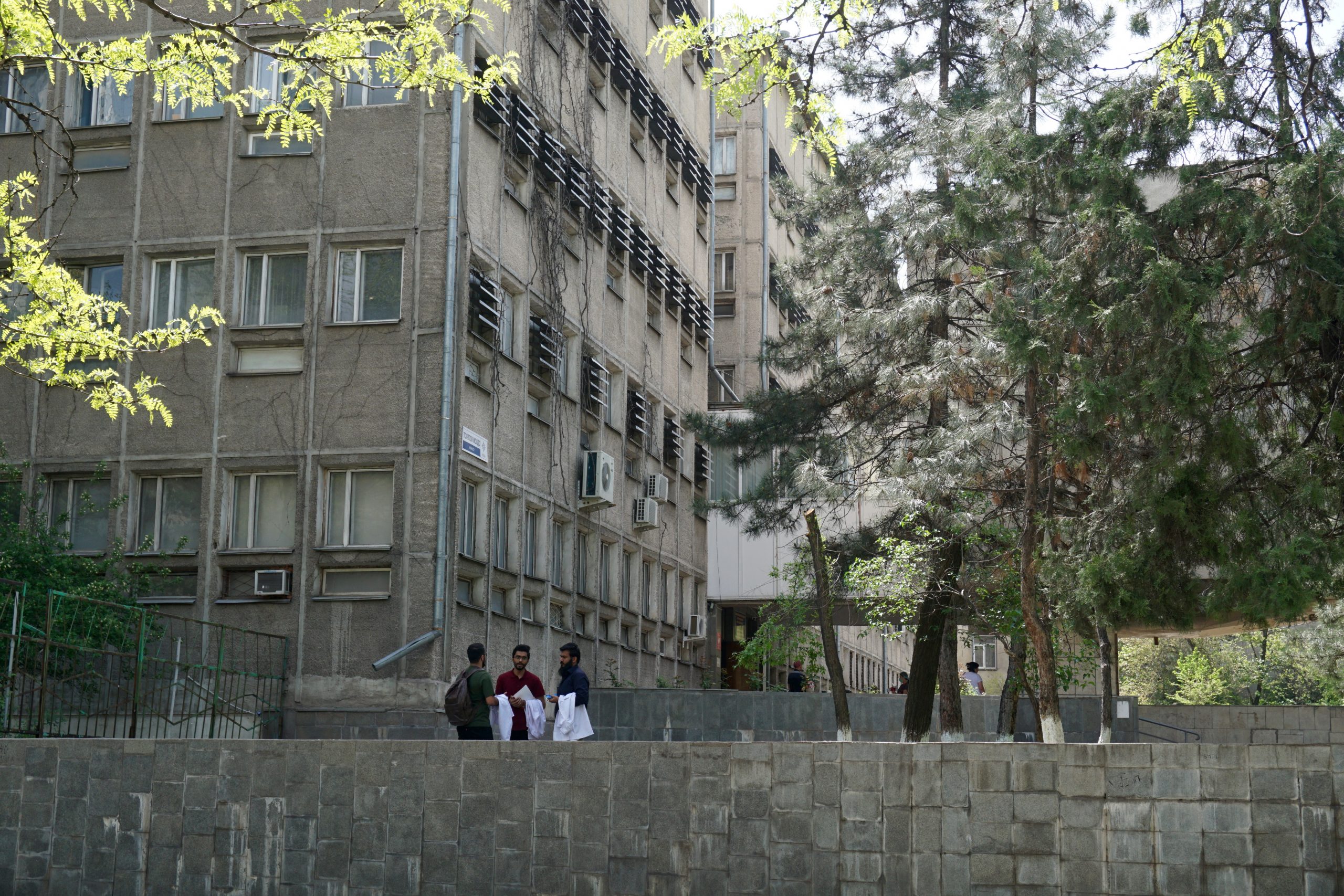 There is actually not much to tell. The priority was a PCR test and to get information about what I would need for the return journey. It was not really clear to me. I found a lab and for 24,- € I was tested and had the result 5 hrs later. Then I started a search for a fabric shop. A friend of mine sews like crazy and my ambition is to bring her fabrics from other countries. My problem is that I don’t really know what the quality is like. There was a fabric shop advertised on the internet, but it was really hard to find and I went back and forth and back and forth until I found it hidden on the first floor of a big house. There were many bales of fabric – and I was helpless in the middle. 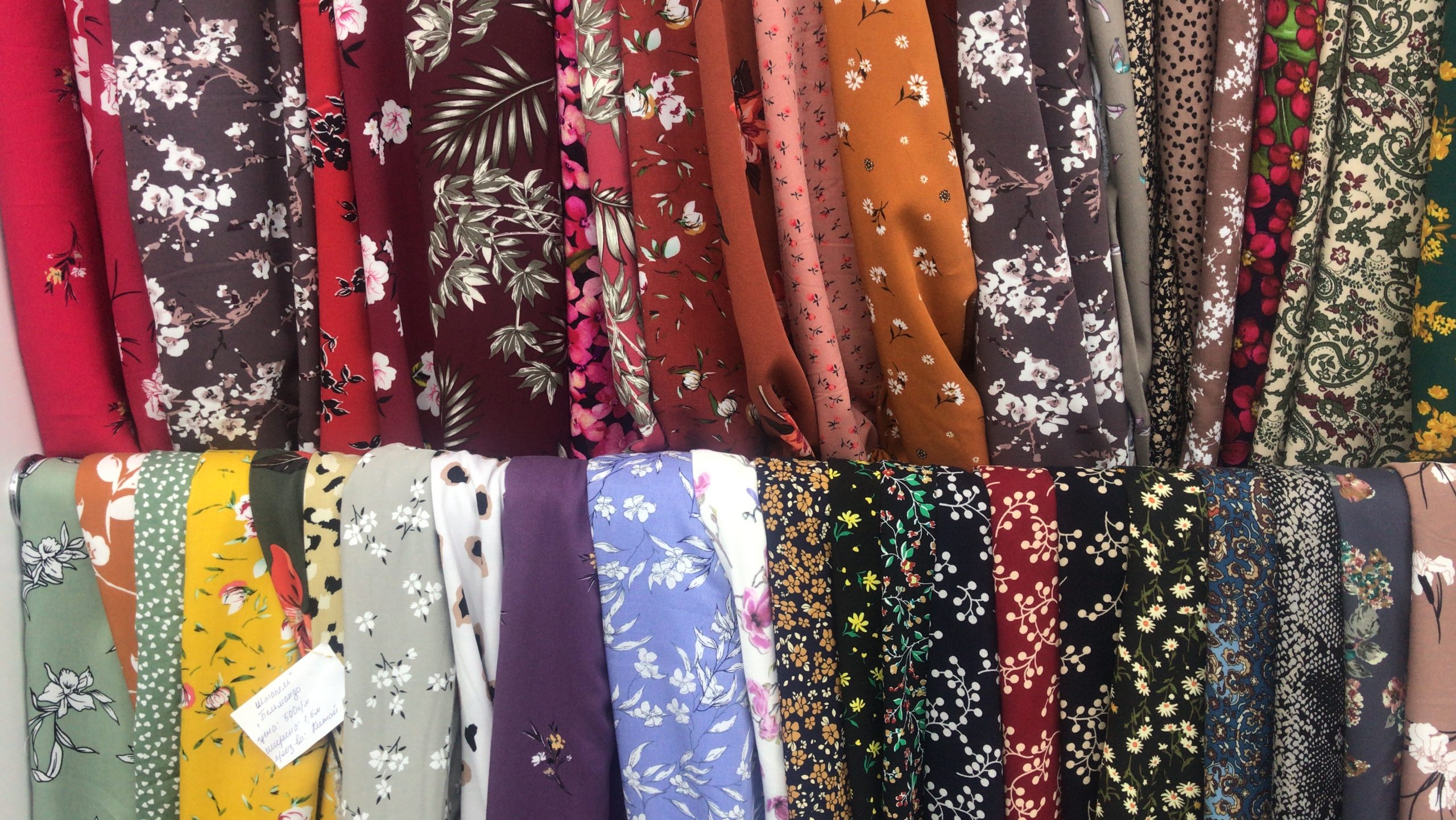 A saleswoman I spoke to didn’t speak English, but wanted to get me a colleague. She came and after a few words in English she asked if I was from Germany. Oh, what luck, she continued in German, she was also learning German at university and had a teacher from Leipzig and not so much opportunity to practise the language. It is be great with me, she understands me very well, you don’t have that with all German speakers. I felt flattered. And then we looked at the fabrics and wondered whether this one or that one. What coincidences there are! To meet a student learning German in a fabric shop! She too expressed the wish to come to Germany.

I was struck by how many (young) people asked me about job opportunities in Germany, about study opportunities in Europe, etc. A large part of Kyrgyz money (25% of GDP) comes from Kyrgyz abroad. The post-Soviet economy does not really get on its feet. Russia (along with China and Kazakhstan) plays a very important role as a trading partner. With the Ukraine war, this has created new complications. The Kumtor gold mine is one of the largest gold deposits in the world, accounting for 8% of GDP. There is also potentially more gold to be found and, as I saw in a documentary, there are indeed still real gold seekers. I was also asked if I might be after Kyrgyz gold. 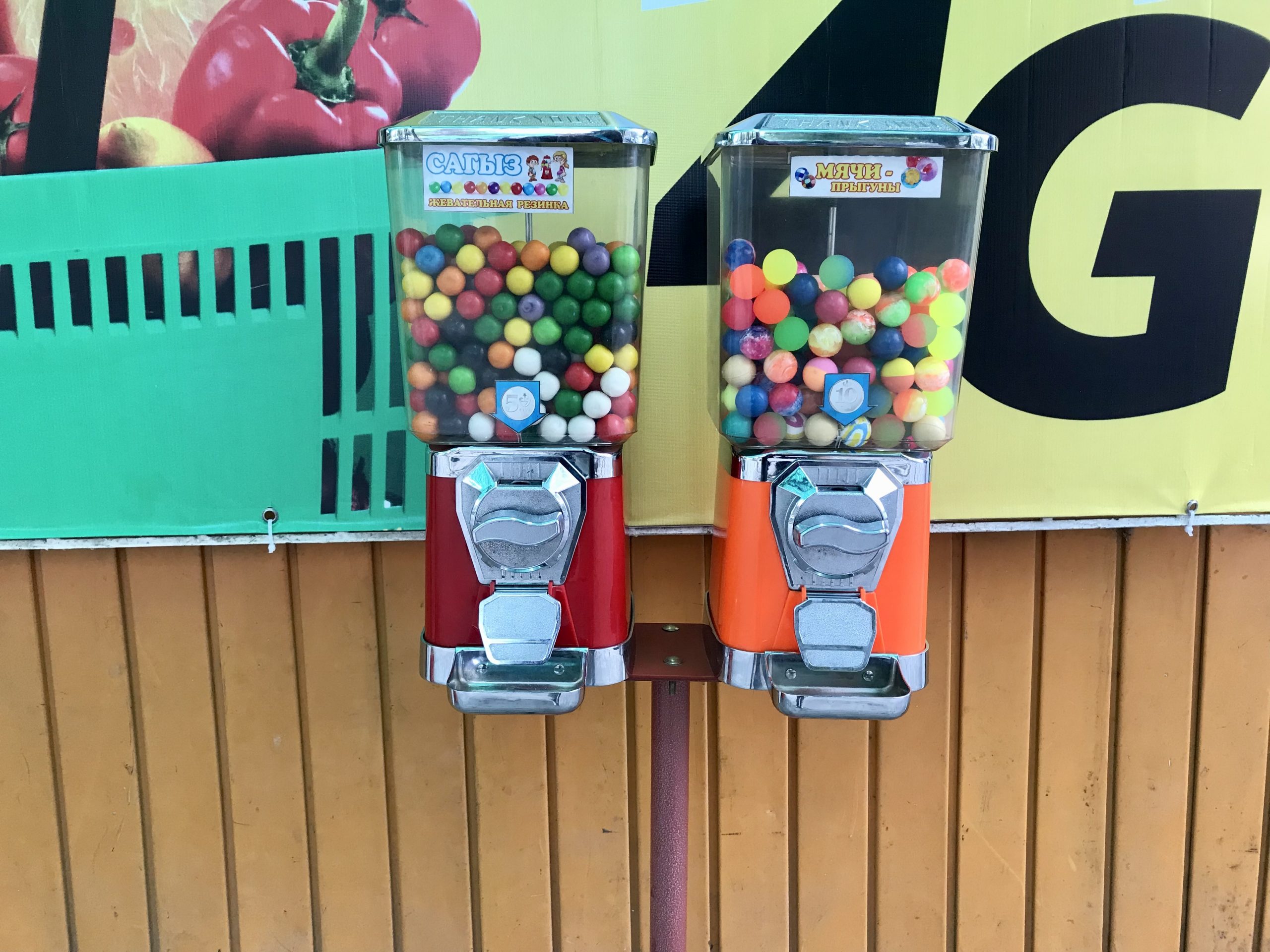 no gold, but childhood memories

Afterwards, I met with Rakhat’s mother, Mina. She is doing Ramadan – and stupidly, my stomach was in my knees because I had delayed lunch due to all the searching for fabric. But she was brave and accompanied me to a restaurant where I ate everything very quickly so that she didn’t have to look so much. 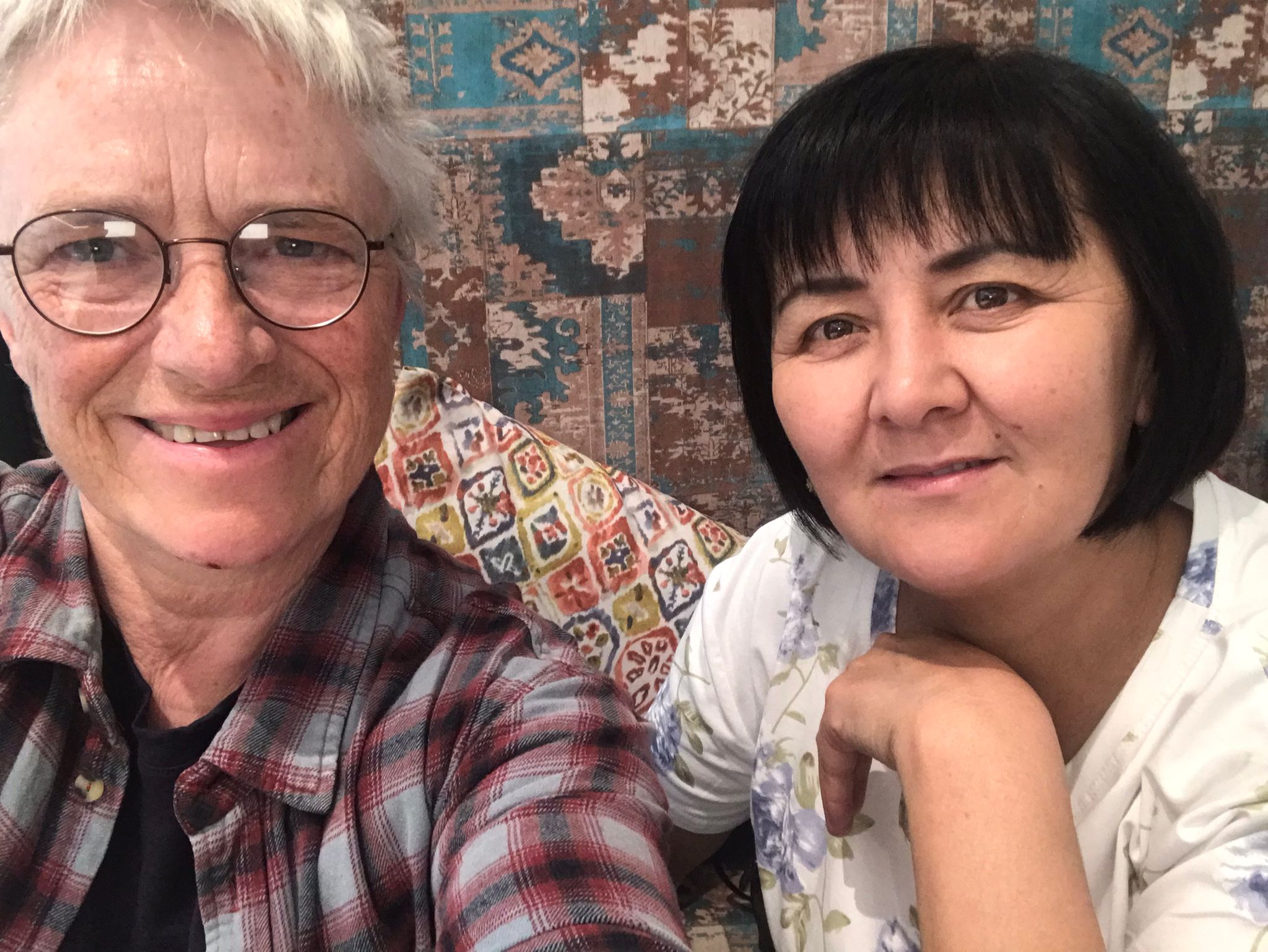 And then it was already evening and I hurried to my accommodation, packed, slept and set off for the airport the next morning. All the drivers, whether taxi, shared taxi or marshrutka, were nice pleasant people, but this one on the long way to the airport was a challenge. He suffered so badly from bad breath that the whole car smelled of it. He also talked like a waterfall to me without me understanding anything, kept making a kind of asthmatic wheezing noise and drove at a snail’s pace. Phew, that was a real challenge! 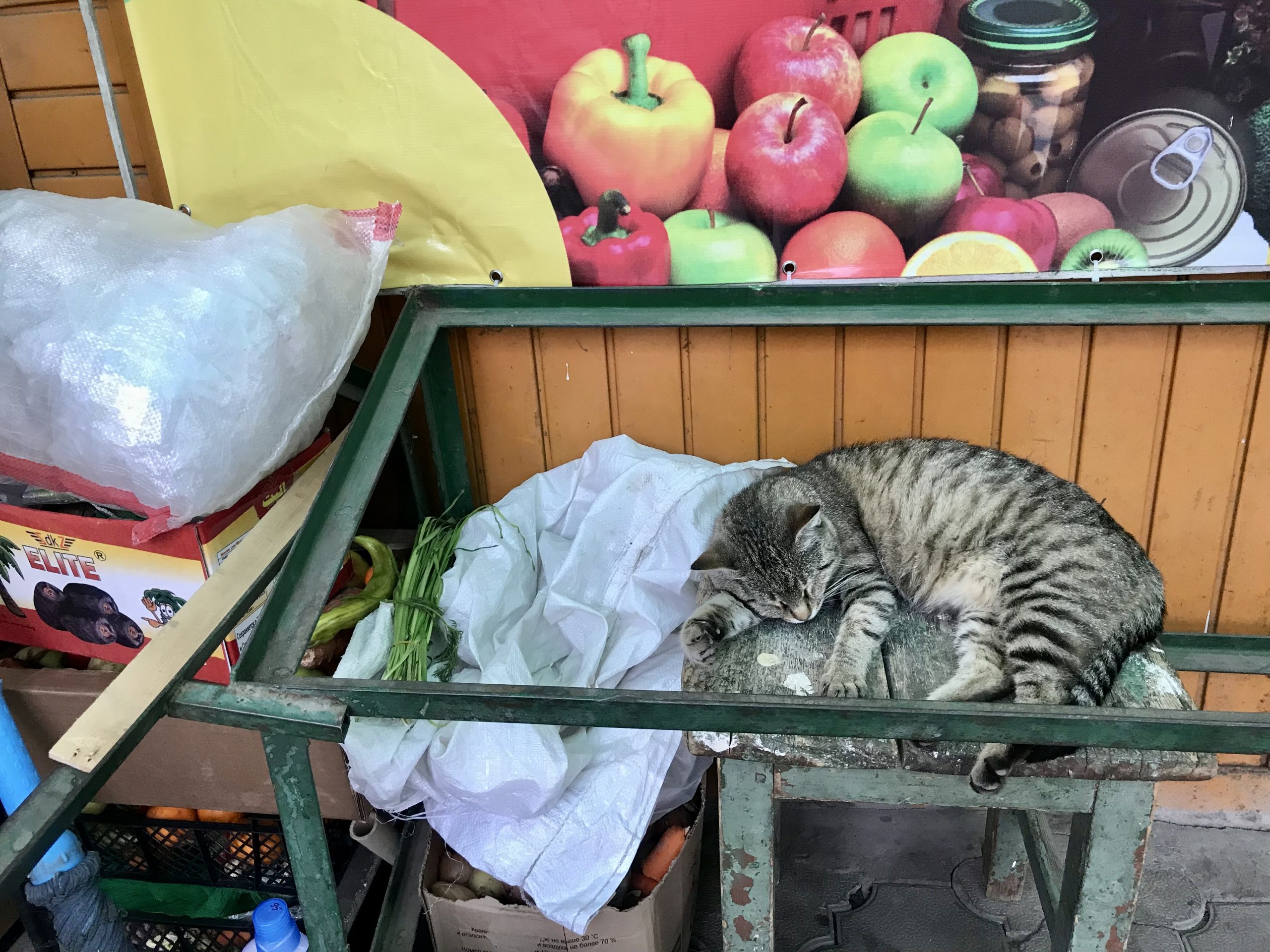 A picture to break up the text

At the airport, my nerves continued to be frayed: there were 4 counters open for check-in and the people wanting to travel were piling up in front of them instead of queuing properly. Finally it was my turn and they didn’t want to see my PCR or proof of vaccination. People were walking around the entire airport building without masks. There is hardly any Corona in Kyrgyzstan. It was only when we boarded the plane that the masks were brought out. I rummaged around and found nothing. I had put a small supply in the back pocket of my backpack! But there was nothing. Luckily I found a shabby-looking mask in a jacket. And at home I discovered the masks in the big backpack. In any case, I found that I could get used to a “non-corona life” extremely well and quickly – and at home I immediately changed again.

At home, the train surprised me with an extremely bad connection to home and at the station my car with an empty battery. And so the qstruggleing started again. On the train, however, I thought anyway: “Was I really away?” It felt like only yesterday I was on another train and the journey in between like a faded dream. I think 3 weeks is too short a time to travel.