Karakol – hinterland, no contacts and no getting through

Directly behind Karakol, on the side facing away from the lake, the mountains rise. This is a bit different from the foothills of the Alps. It was said, that you should climb 700 metres in altitude and then walk across to Ak-Suu (near the great thermal baths) and from there easily back again with a marshrutka. So I packed my backpack and set off. I underestimated how long it took to get to the point where the road was really uphill. I passed a park: 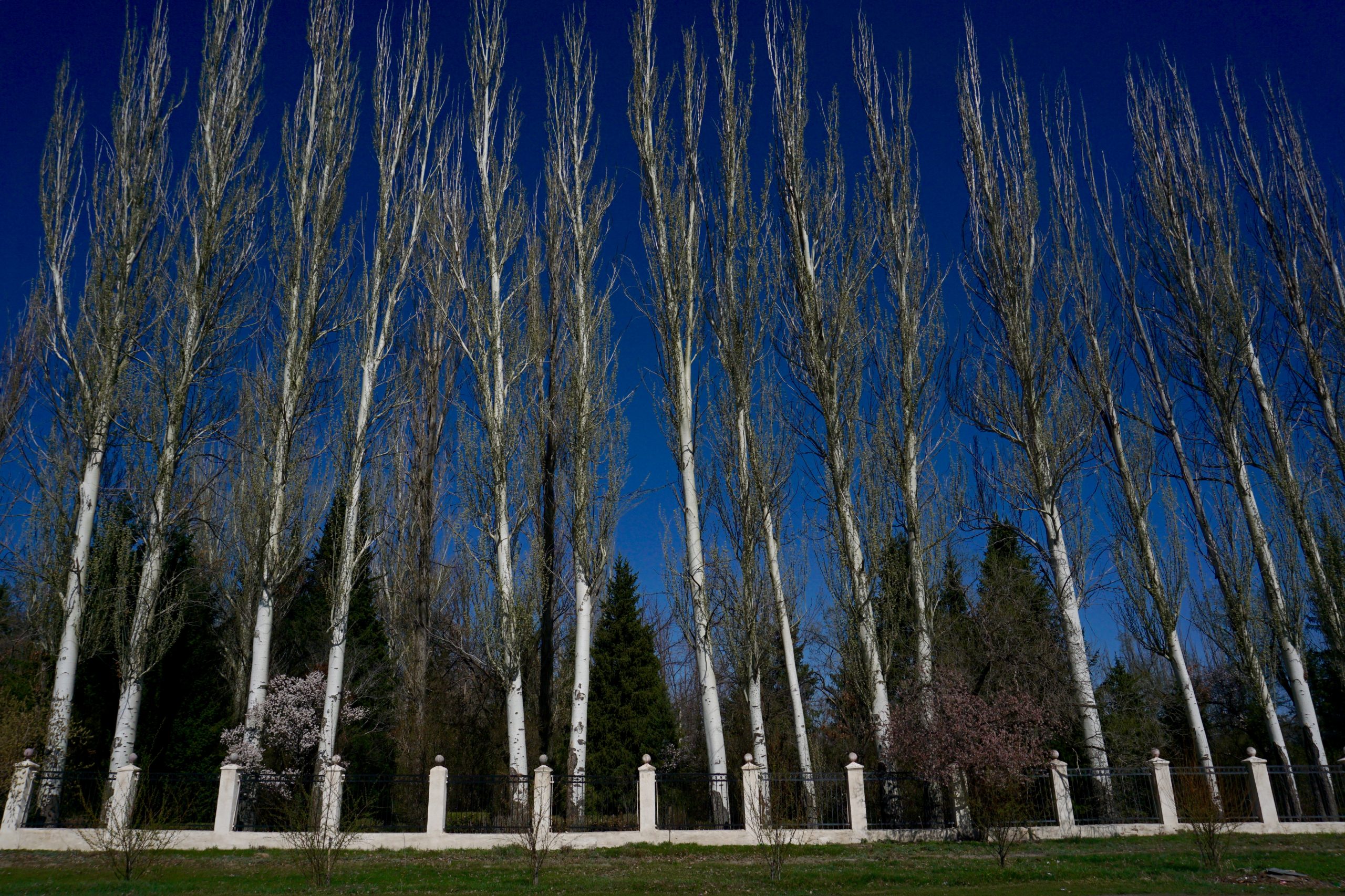 There were a lot of cars parked along a small road. There was something going on! I curiously stalked towards it. A lot of people were standing around and one was talking. Politics? I looked closer: only men. Then two of the crowd ran out and picked up a thick carpet. The crowd parted and I saw what was going on: a funeral! Oops. How fortunate that I wasn’t completely close. But I didn’t want to miss out on a photo. Actually, I would have been more interested in what it’s like with the dead and the rituals – I’ll find out one day! 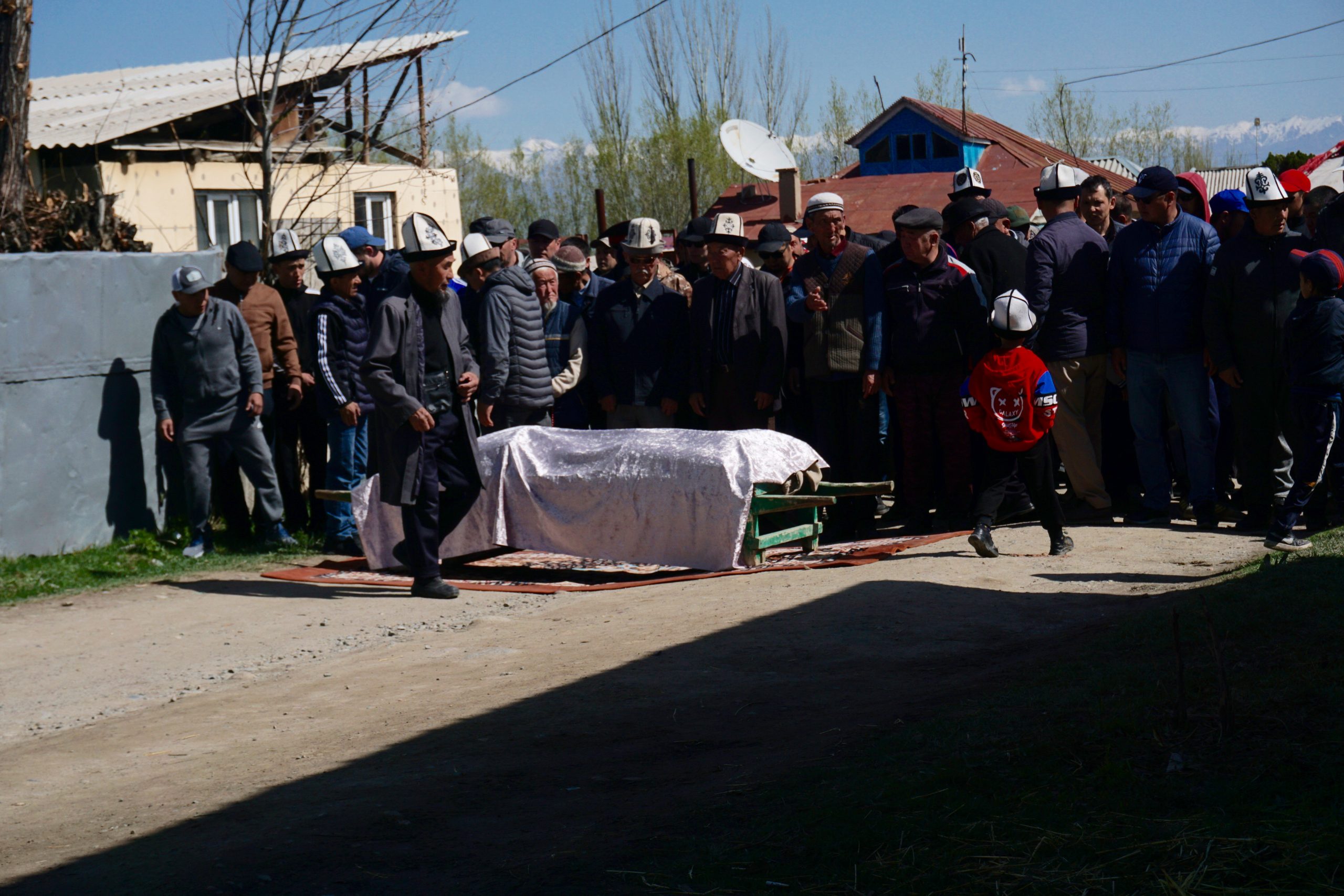 Then I passed by a remote large farm where I was taken with the lighting of its veranda. 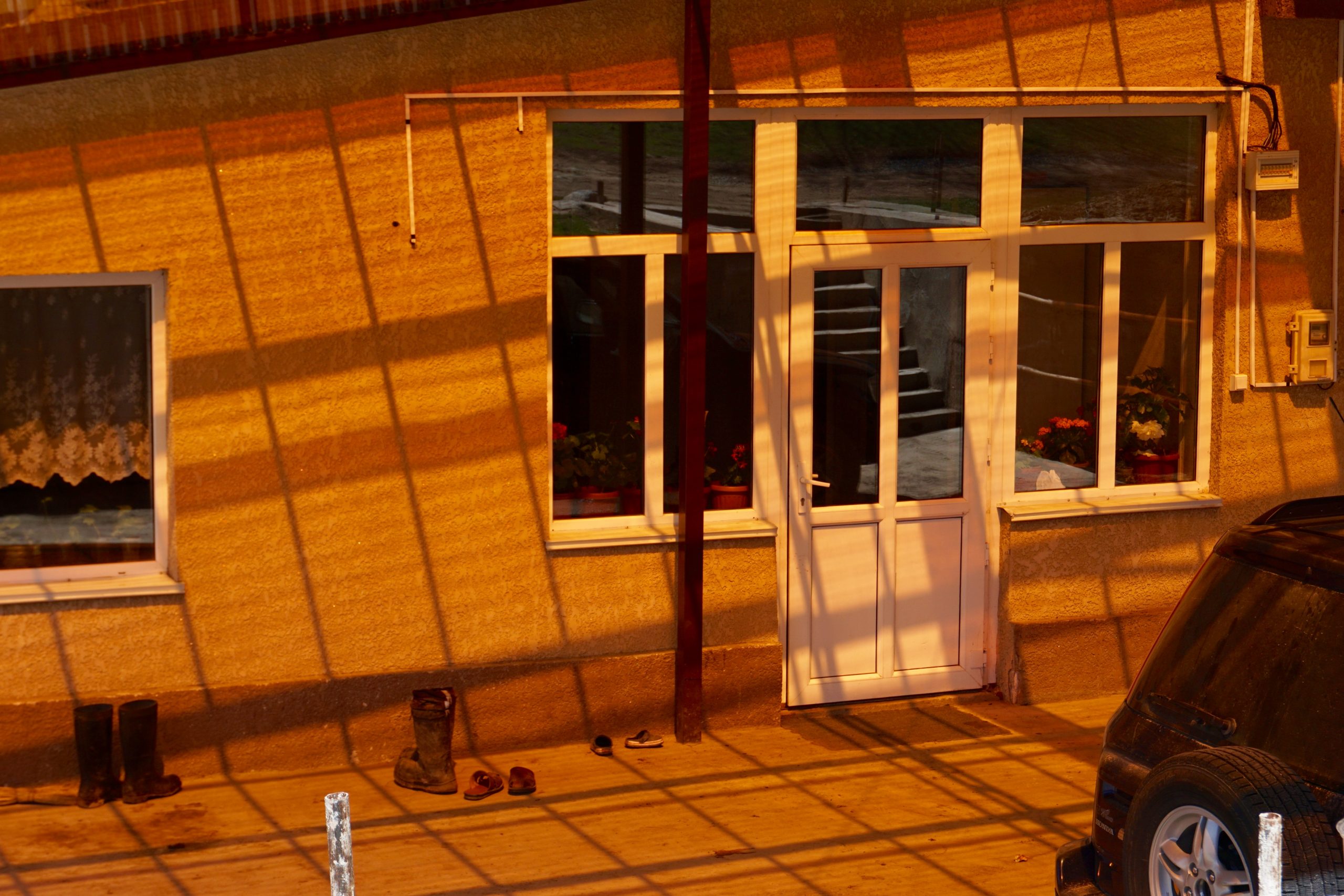 I climbed higher. A dot from the many (animal) dots above detached itself and came towards me. A galloping rider. I was already bracing myself for an encounter – and was quite taken aback when he simply dashed past me at a fast gallop. 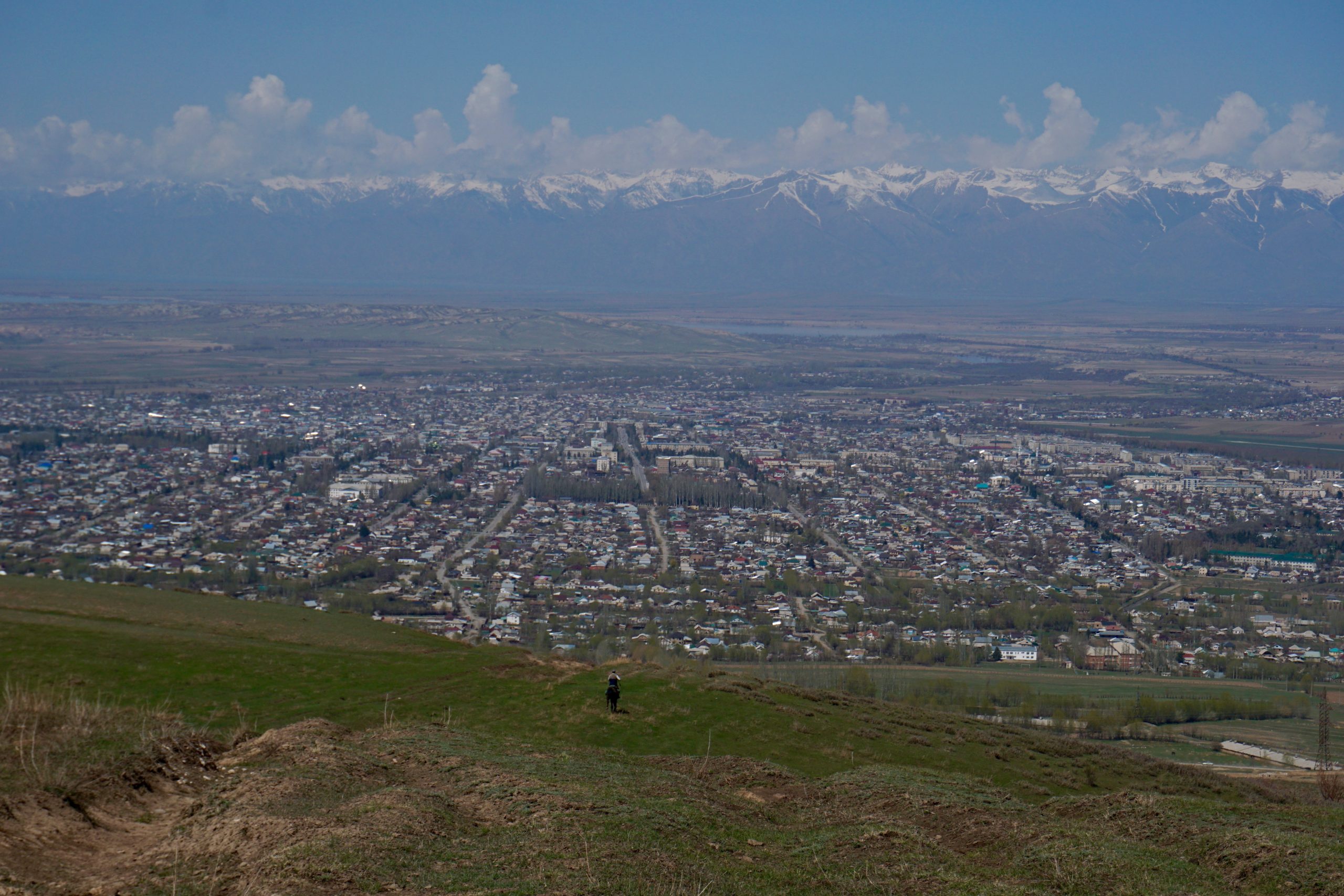 But doesn’t it look kind of gigantic? This little rider, the flat city and then this snow mountain silhouette above it all.

I went on. Always climbing a grassy hill, downhill again, to hike up the next one. It reminded me again of my favourite landscape in the Changthang. 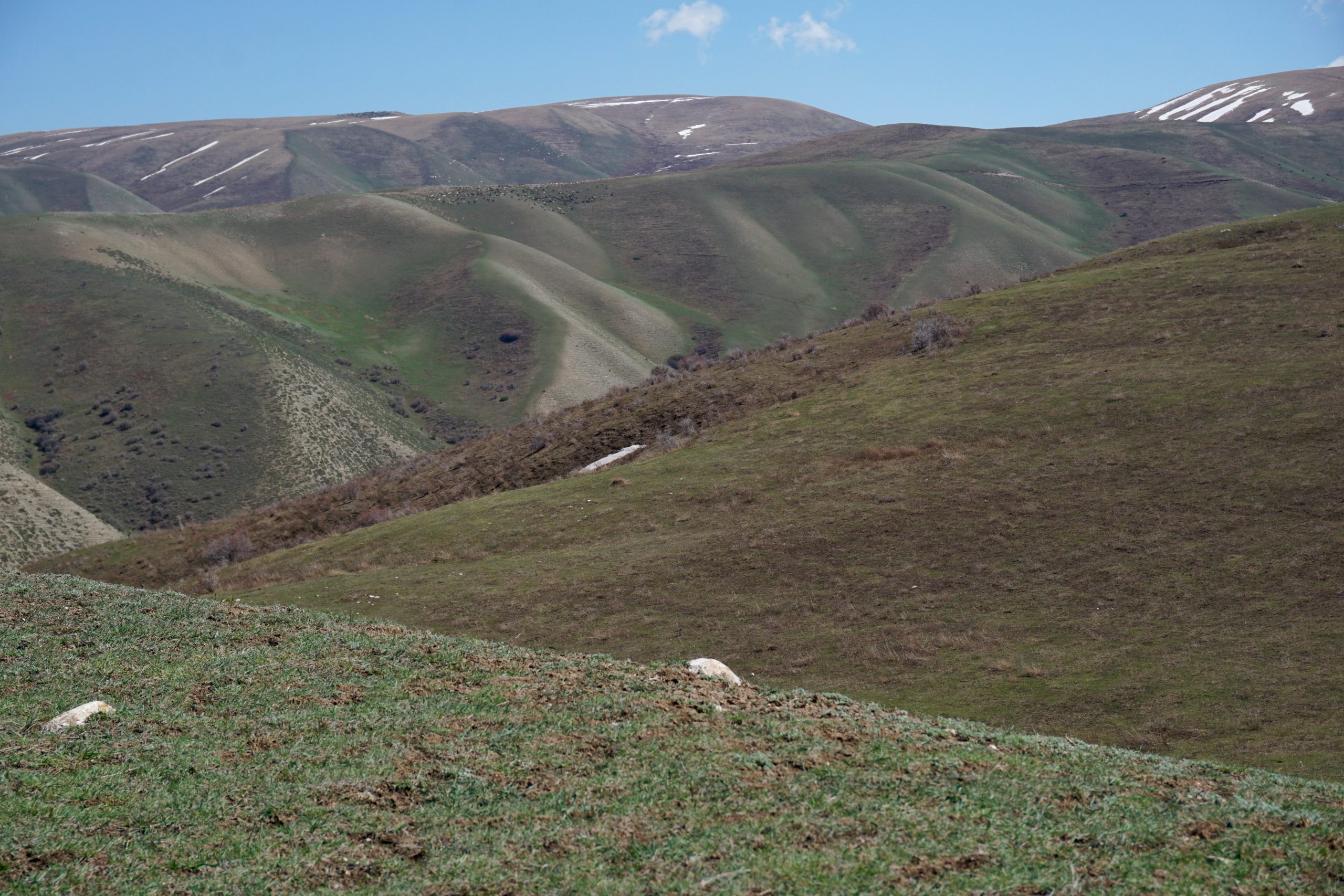 Up there, I was again meeting a man with his dog. The man paid no attention to me at all, the dog eyed me a little. Somehow it’s almost surreal to see yourself in a fairly large area, to be there – but not to make contact. 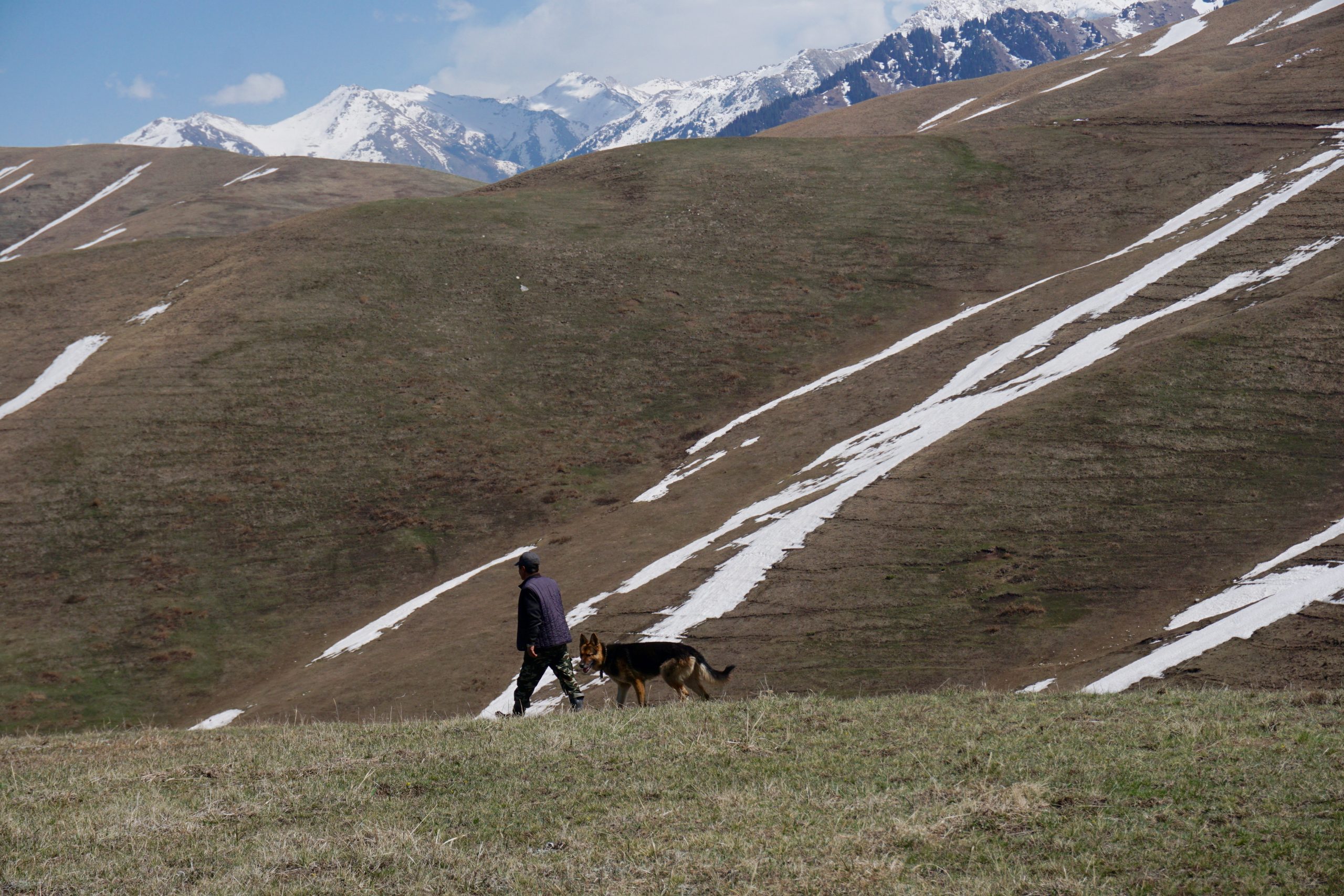 He lives kind of weird – totally close to the city – yet quite lonely in the middle of the wide landscape. Or does he go up every day? Or maybe he rides. 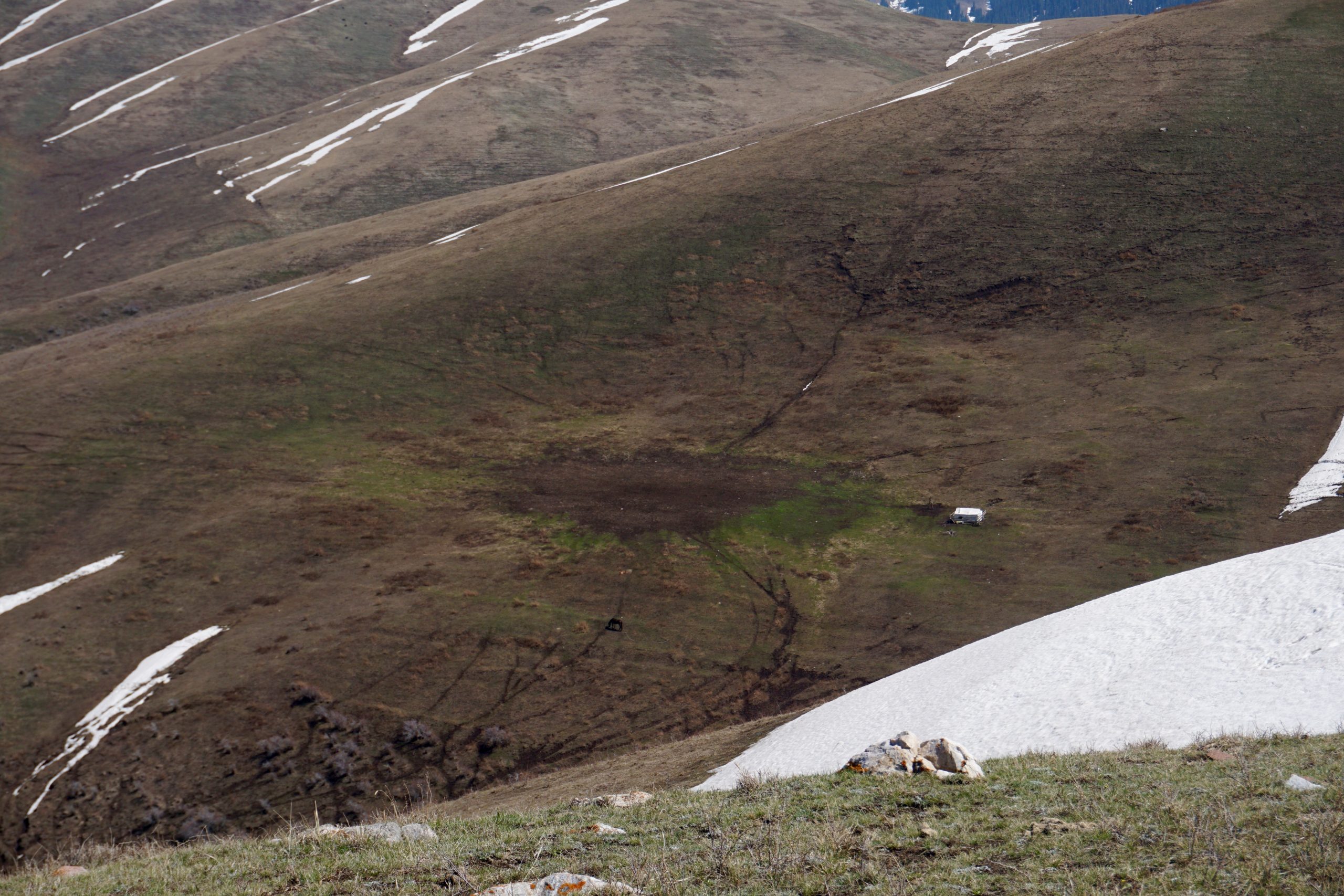 From the tiny hut, however, you can also have a good view of the plain. I am fascinated by this area between the city and the absolute solitude of the mountains, 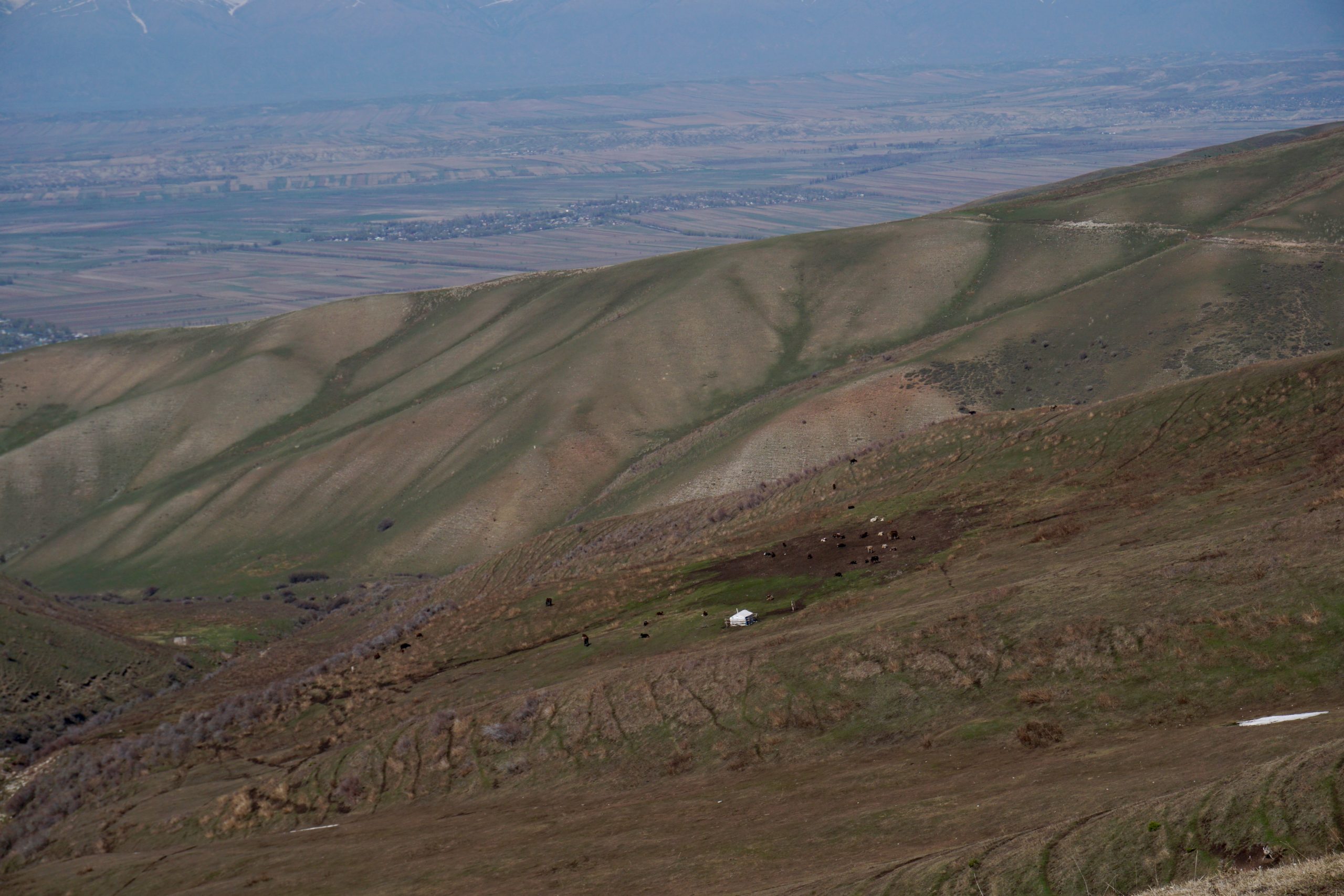 He had to walk around so much because his cows had scattered in all directions. There were a few resting here: 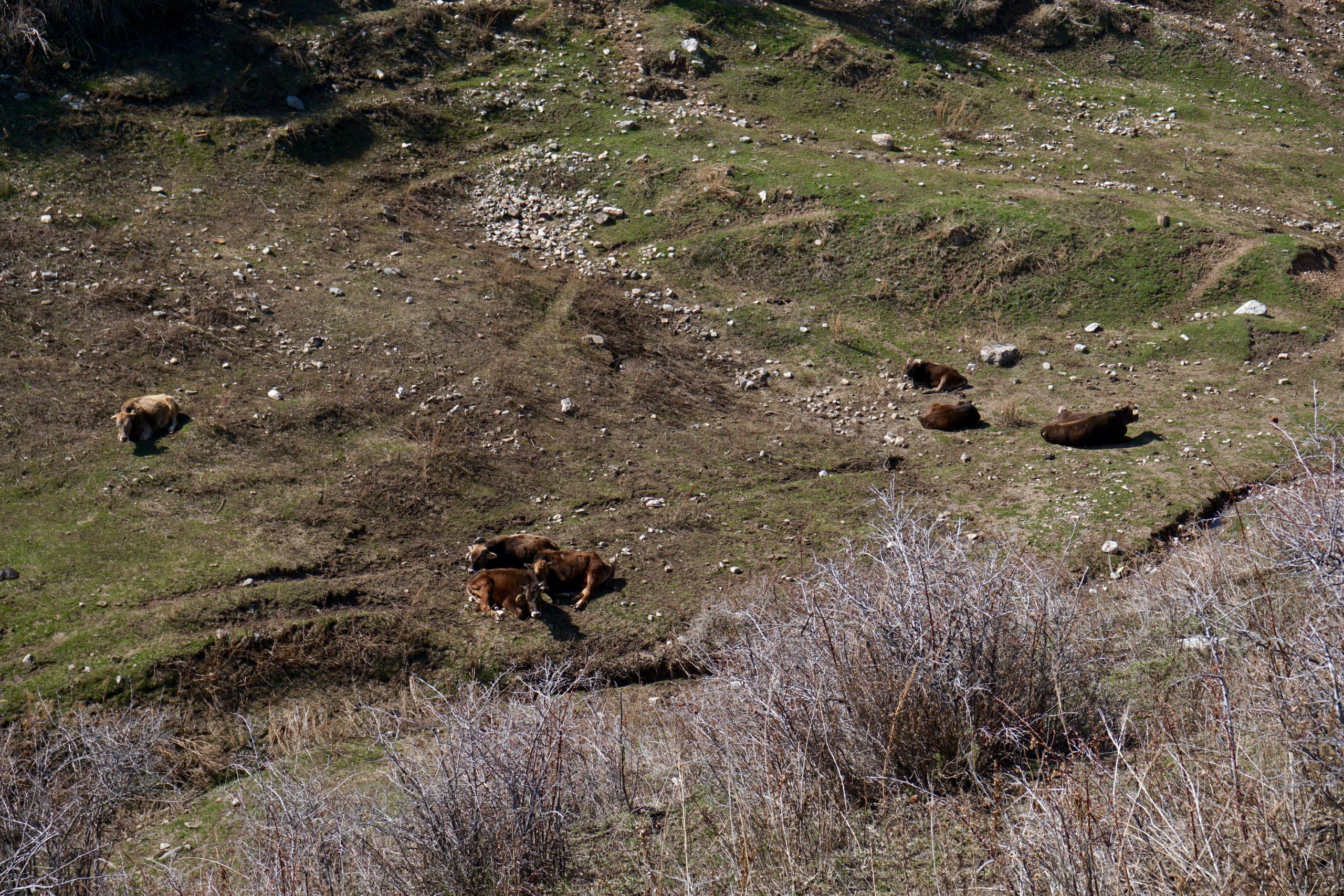 I climbed a little higher and had a lunch break with a beautiful view. It amazes me every time that it works: I climb up, find a place to rest, look down – and am happy. Always! 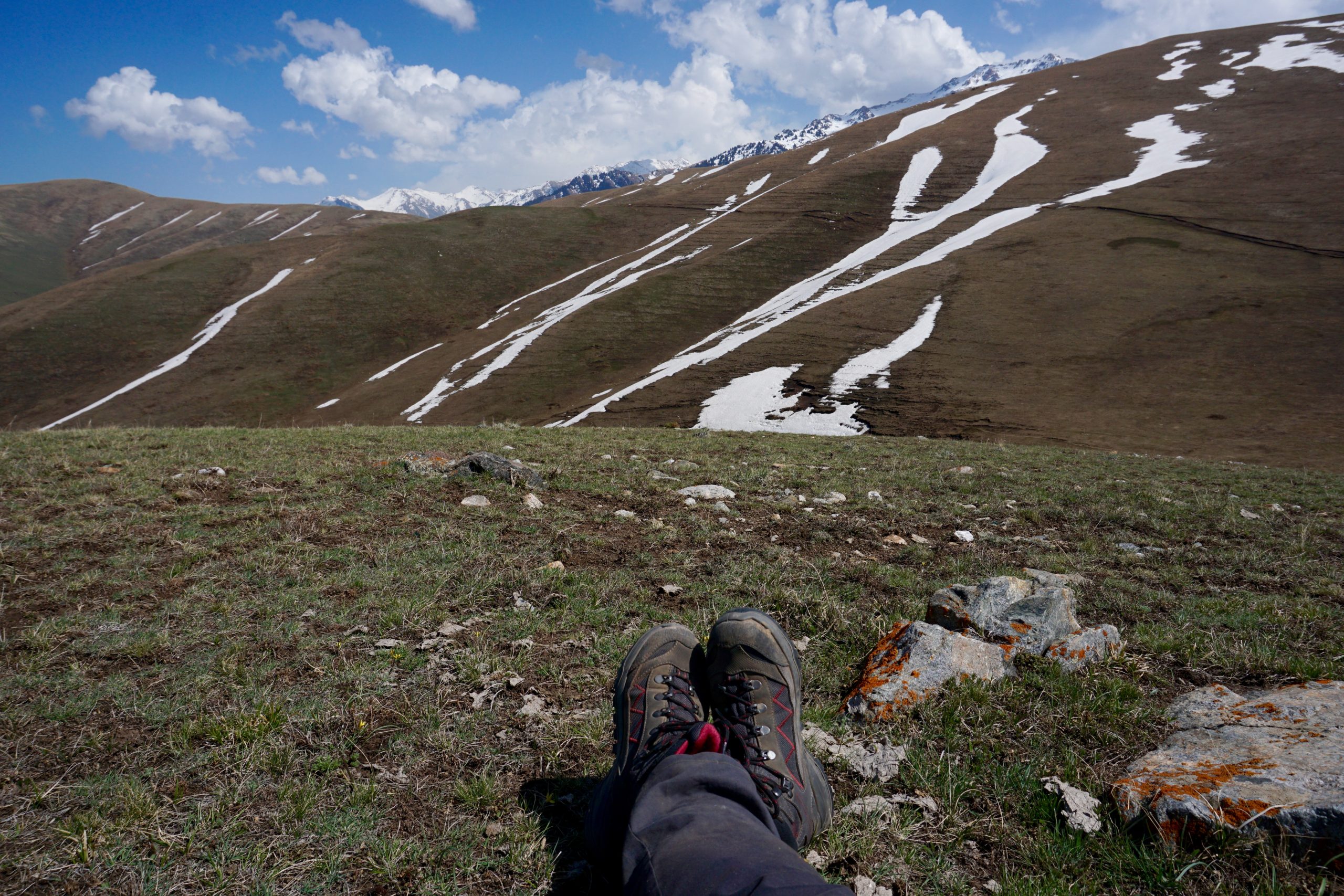 The path should branch off back there and I should simply follow it at the same level. However, I overlooked how deep the snow remnants were. I pretty much sank into the first one. I scrambled around the second one at the top – and then I gave up. I couldn’t see how many snowfields were still waiting for me – and considering the time, I then went down again in a small arc. 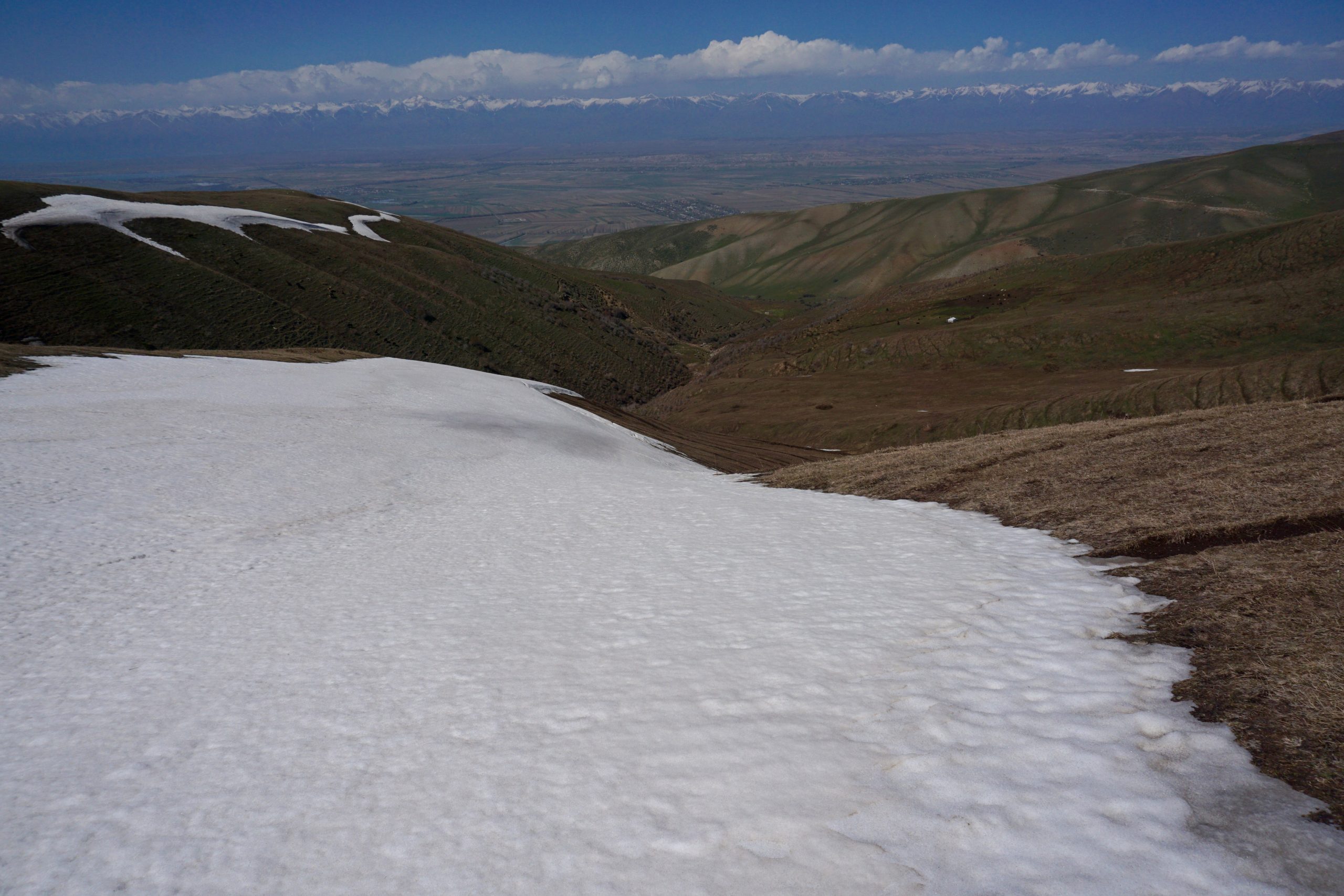 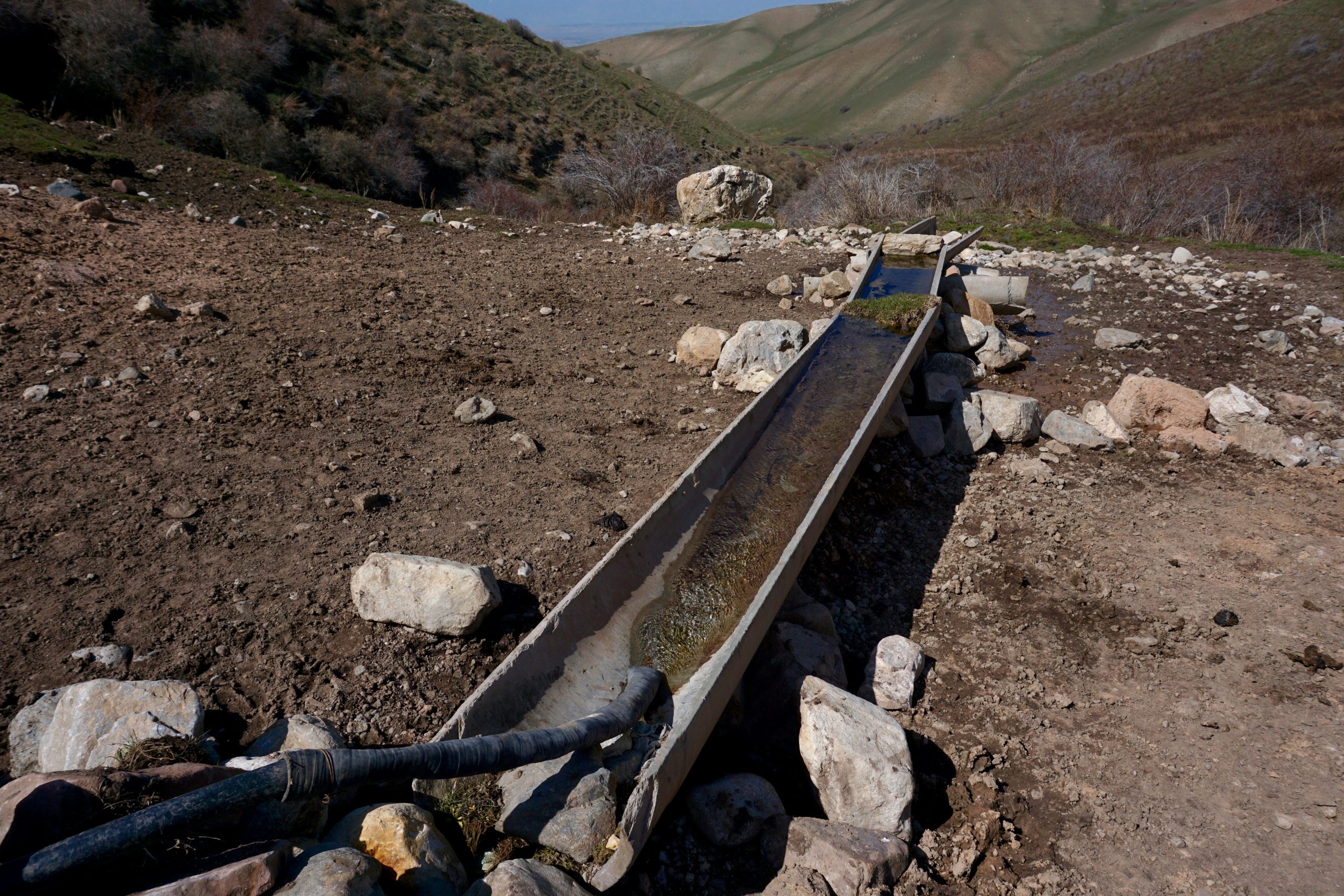 Anyway, the tour was long enough that I was pretty limp afterwards. But I would like to do it again properly. And then squat in the thermal bath!