On Tuesday, I had an appointment in Tbilisi. Last time I met Nicki, a great woman who also speaks perfect German! Her two brothers live with families in Berlin and so there is a lively family exchange. I found Nicki on Facebook and so it was great to reconnect and I guess we were both curious about what had happened in the past years.

We met at the botanical garden. It had thundered late in the evening and in the morning it was still sometimes wet from above. I walked quite a distance to the meeting point and saw some crumbly old town: 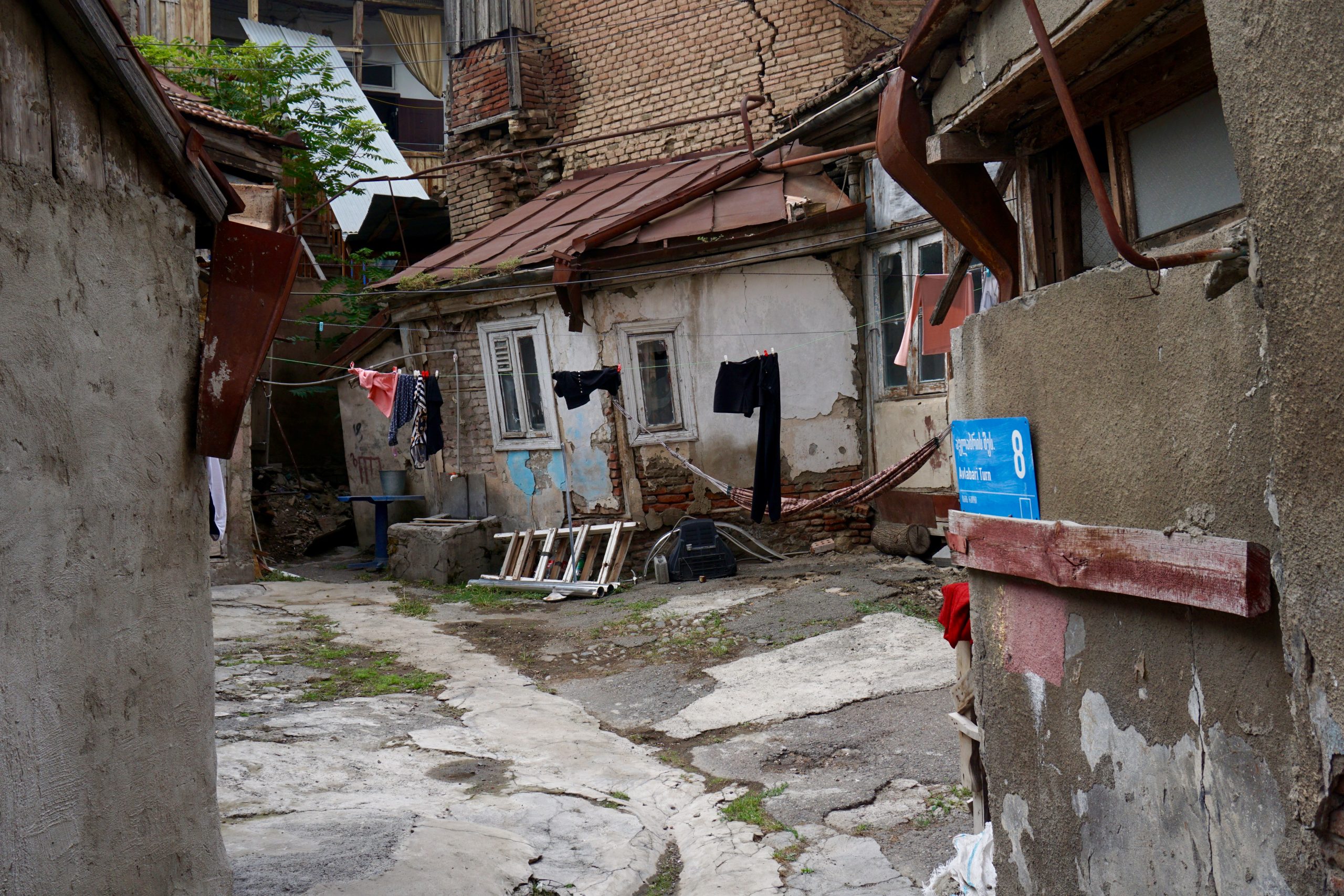 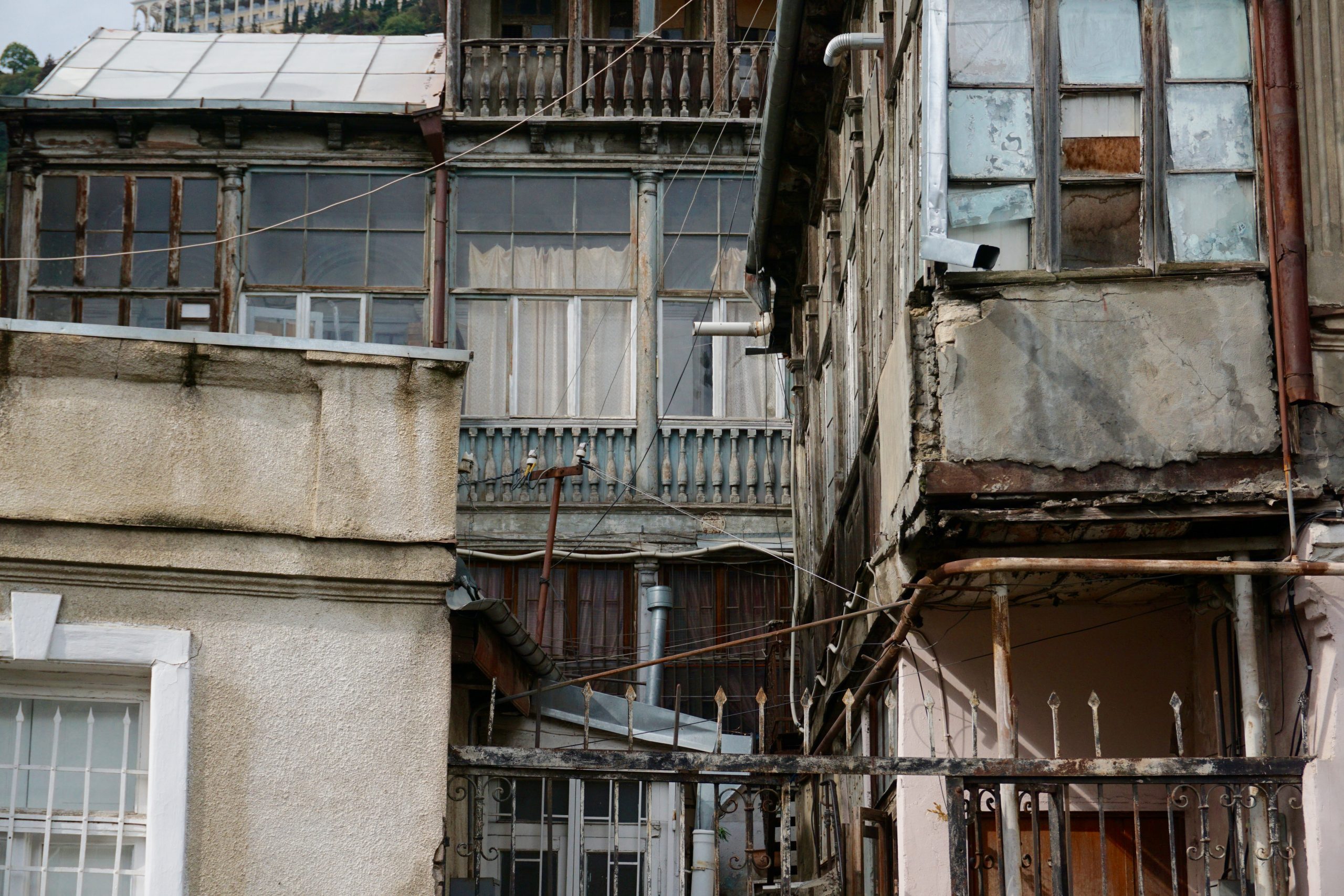 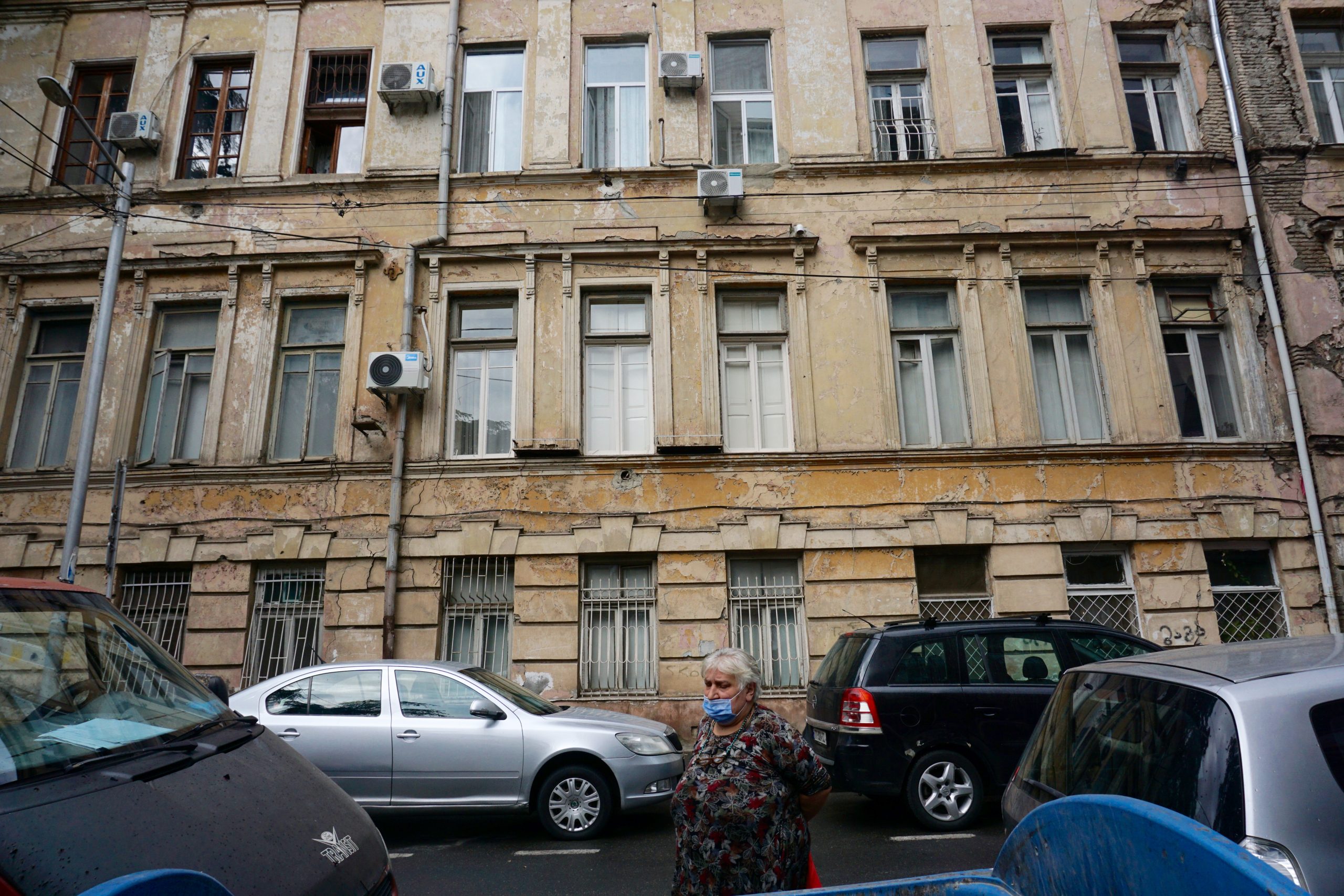 The Georgians in Tbilisi have actually made it very nice for themselves: many flats are grouped around terraces/balconies and so people live well together and yet on their own. In any case, a balcony community has to arrange itself well so that people look forward to meeting each other. 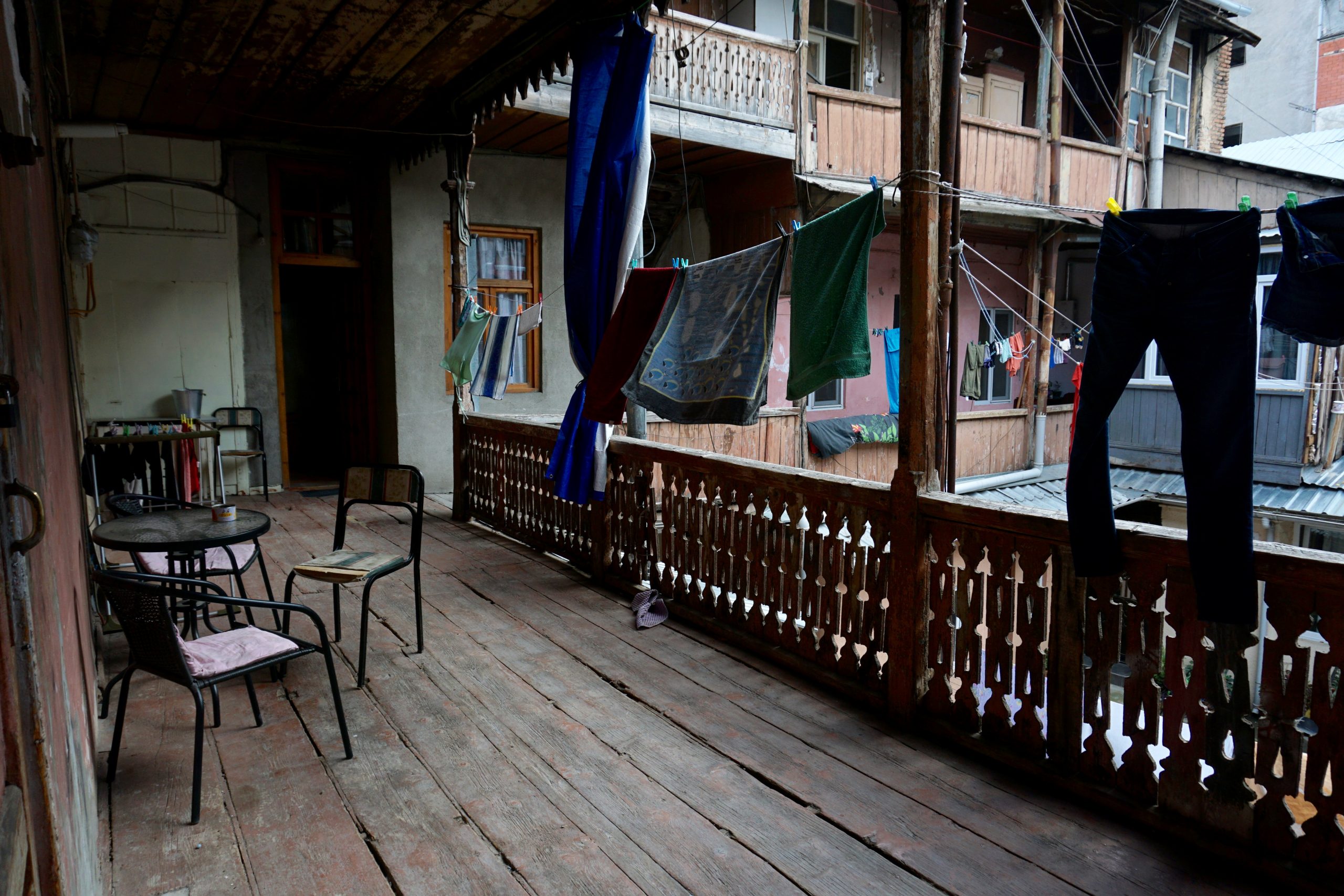 Then I met Nicki and we spent a wonderful time together in the botanical garden with beautiful places, lots of plants etc. Her husband works there, but not many people come to work at the moment. Not in Tbilisi, because the public transport, bus and metro, doesn’t run because of Corona, and many people don’t have a car and can’t afford taxis. But you still get a salary and if you can work from home, all the better. 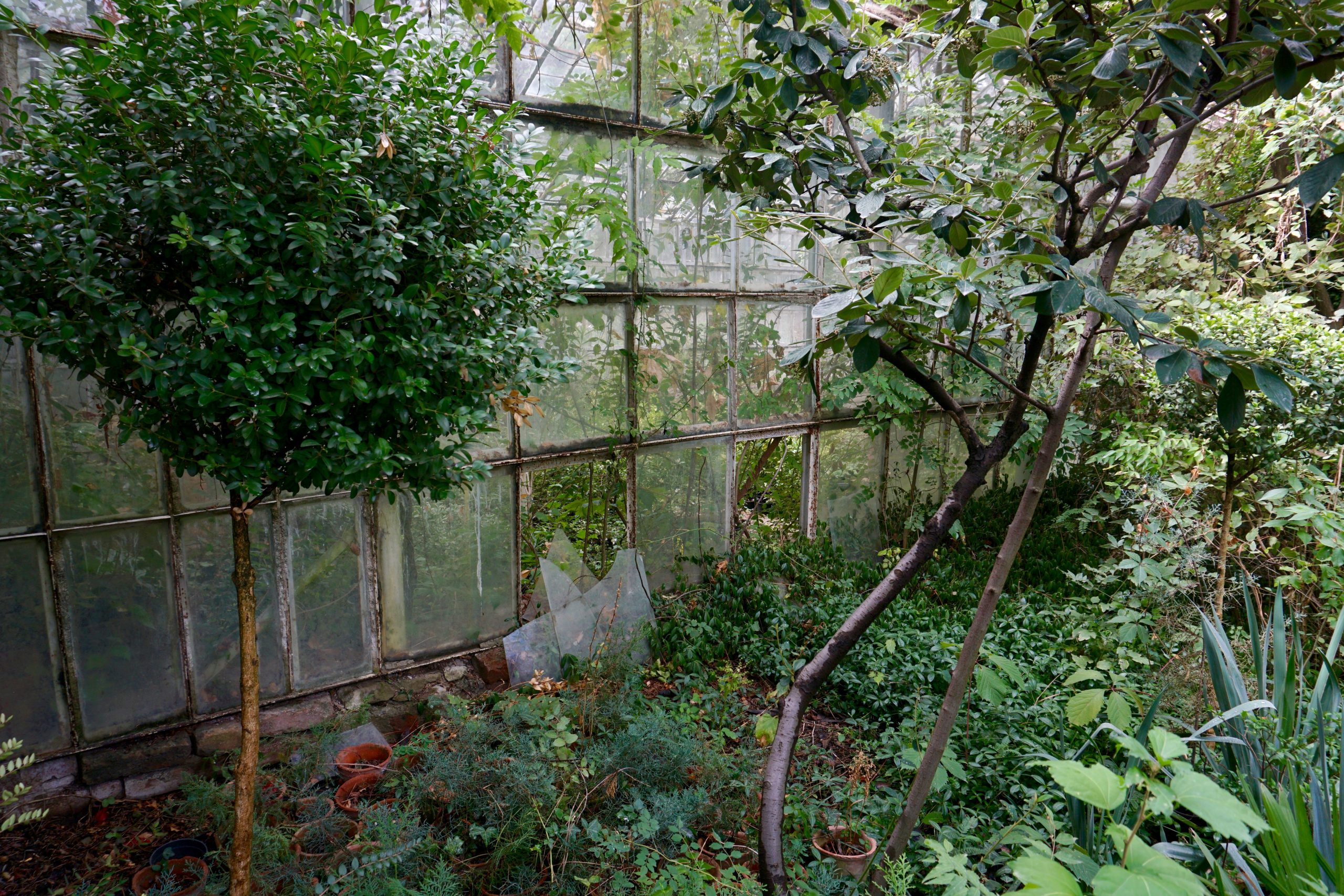 Greenhouse in the Botanical Garden

I hope to see you again before I leave. It’s great how it’s so easy to reconnect after 12.5 years.

Afterwards, I wandered here and there and to a big church: 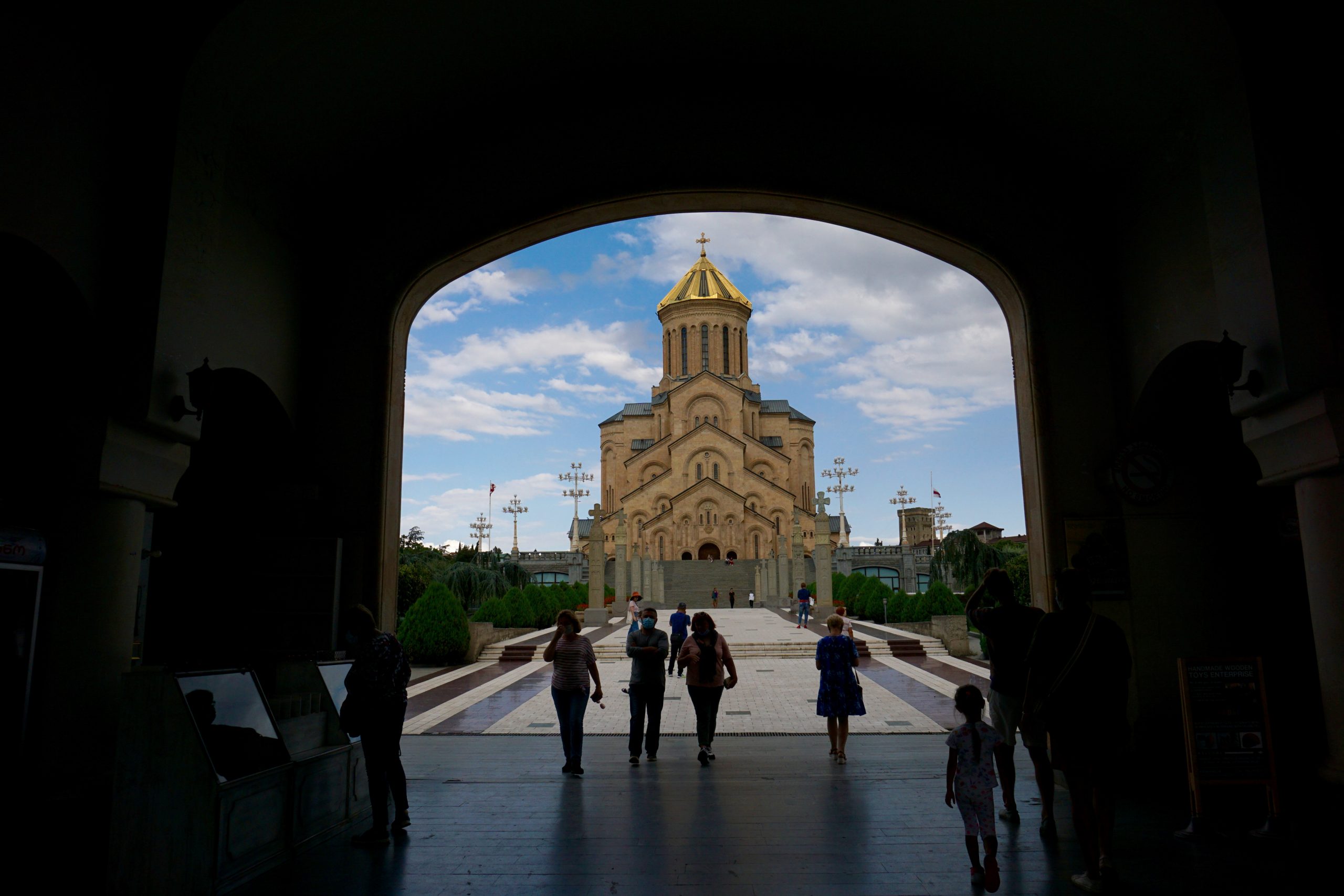 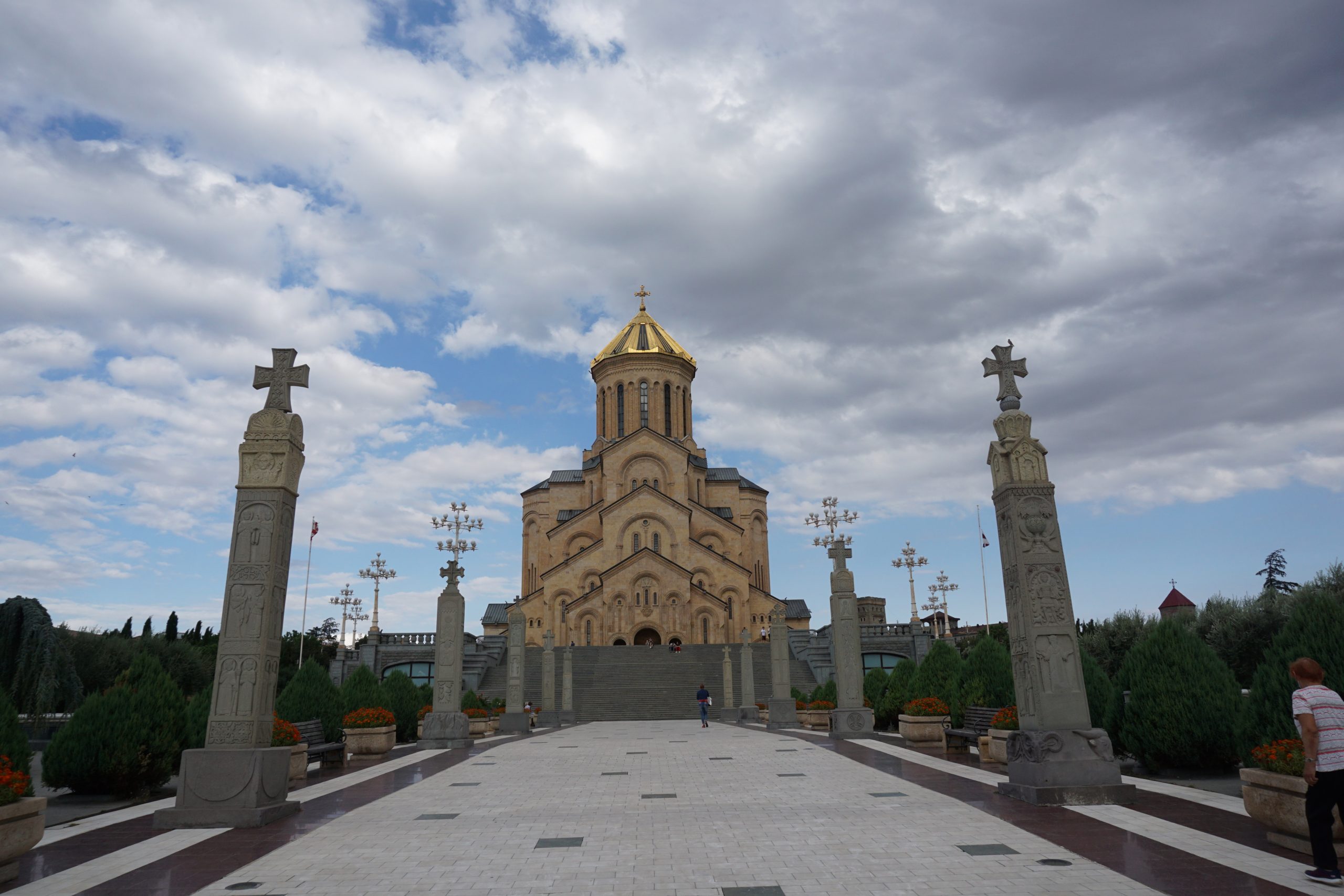 The presentation somehow made me think of India. At the entrance there was a sign with pictograms, including a crossed-out camera with a flash. I thought: oh, like in Ladakhi monasteries, where you’re not supposed to use a flash either. And took a few pictures inside, including this Jesus 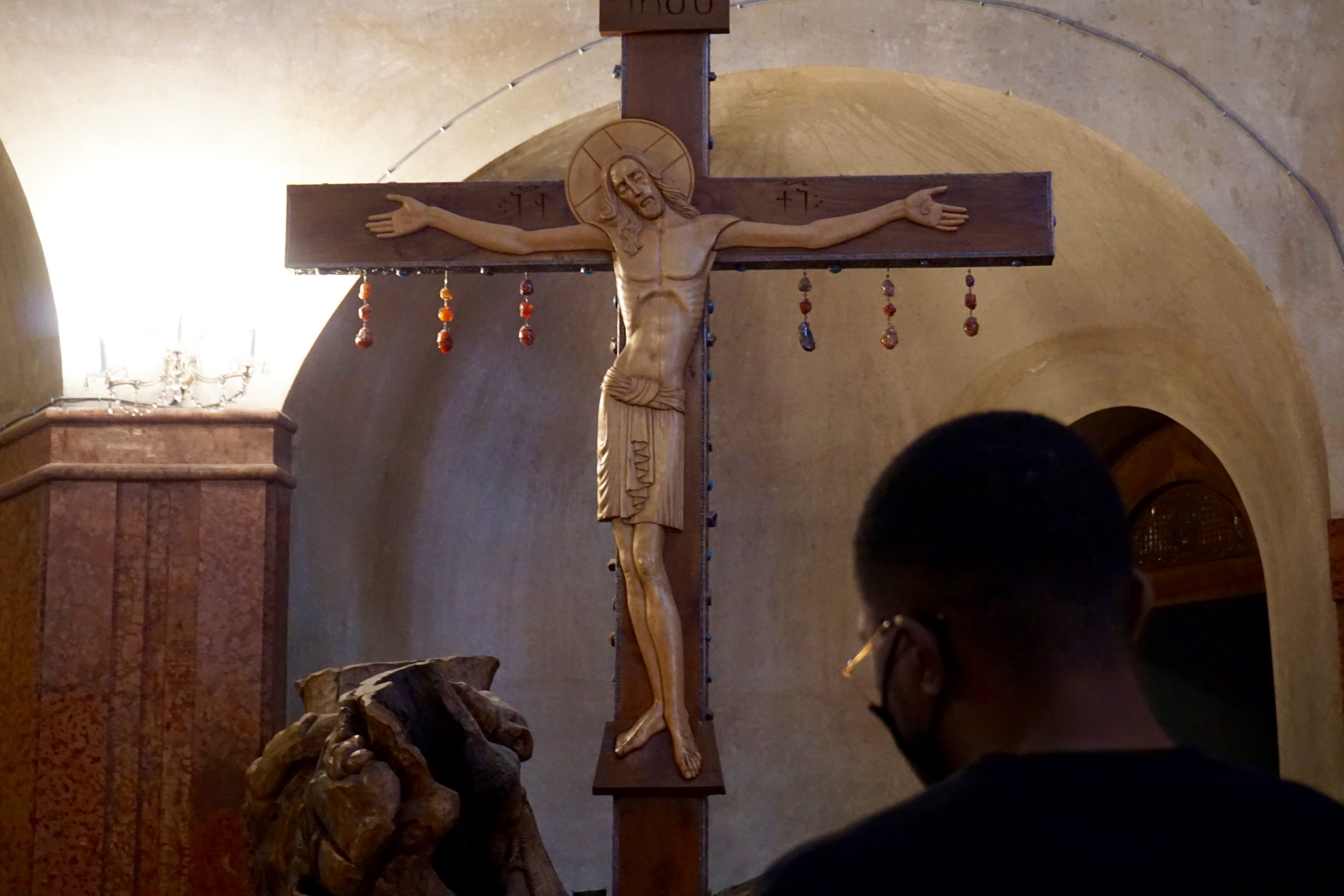 Jesus with elegant pose of legs

A few people looked at me strangely. And on the way out, I thought that I had misinterpreted the pictogram and that I shouldn’t have taken a photo – just like in most other churches. Well then….

I think there was a bit more to observe, but I can’t think of anything at the moment because I’m so exhausted.

In the evening and at night I had the train experience. The train left at 22:45 and arrived in Yerevan at 7:35. Georgia is quite a small country with not so many railway kilometres and so there are hardly any trains. The main railway station is not recognisable as a railway station at first, it is more like a shopping mall with an access ramp like at the airport. You walk through the shopping mall and then find small exits to the tracks. I had already seen this during the day. 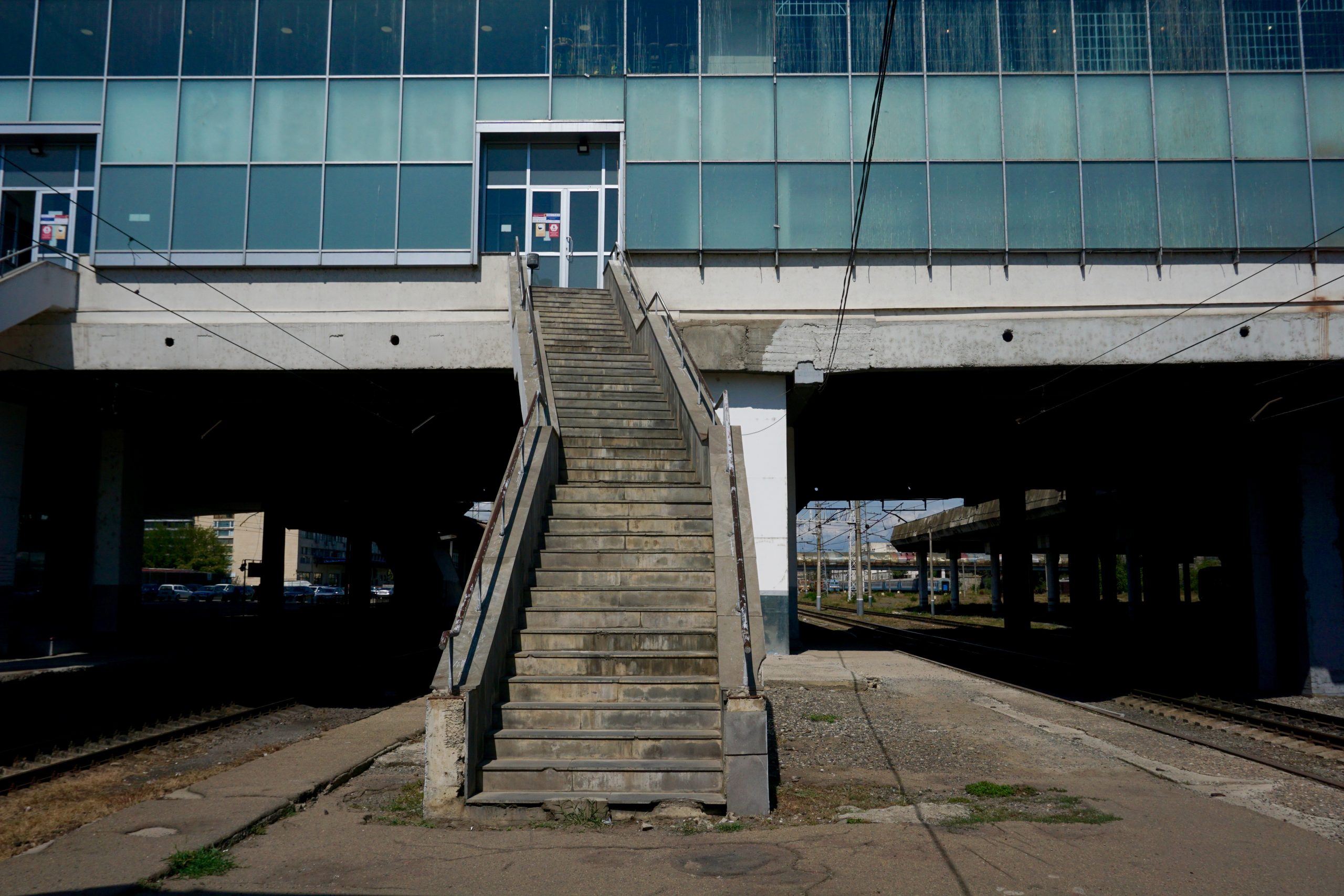 It was like it was deserted. At night, too. I stood alone on the platform until 2 women came – they had 3 huge heavy suitcases with them, filled either with stones or gold bars and also about 10 other pieces of luggage. I helped carry them down and then on the train. Another 1 man and 1 couple came and that was it. The train came from Batumi and there were already people on it, but it was far from full. But the train was very chic and modern and comfortable. I was in third class and had a couchette with sheets, pillow and towel. I also met two nice Armenian men right away, they offered Coke and spirits and came from their holidays with other friends and were very fond of drinking and continued with beer in the morning, but they were really friendly and polite. 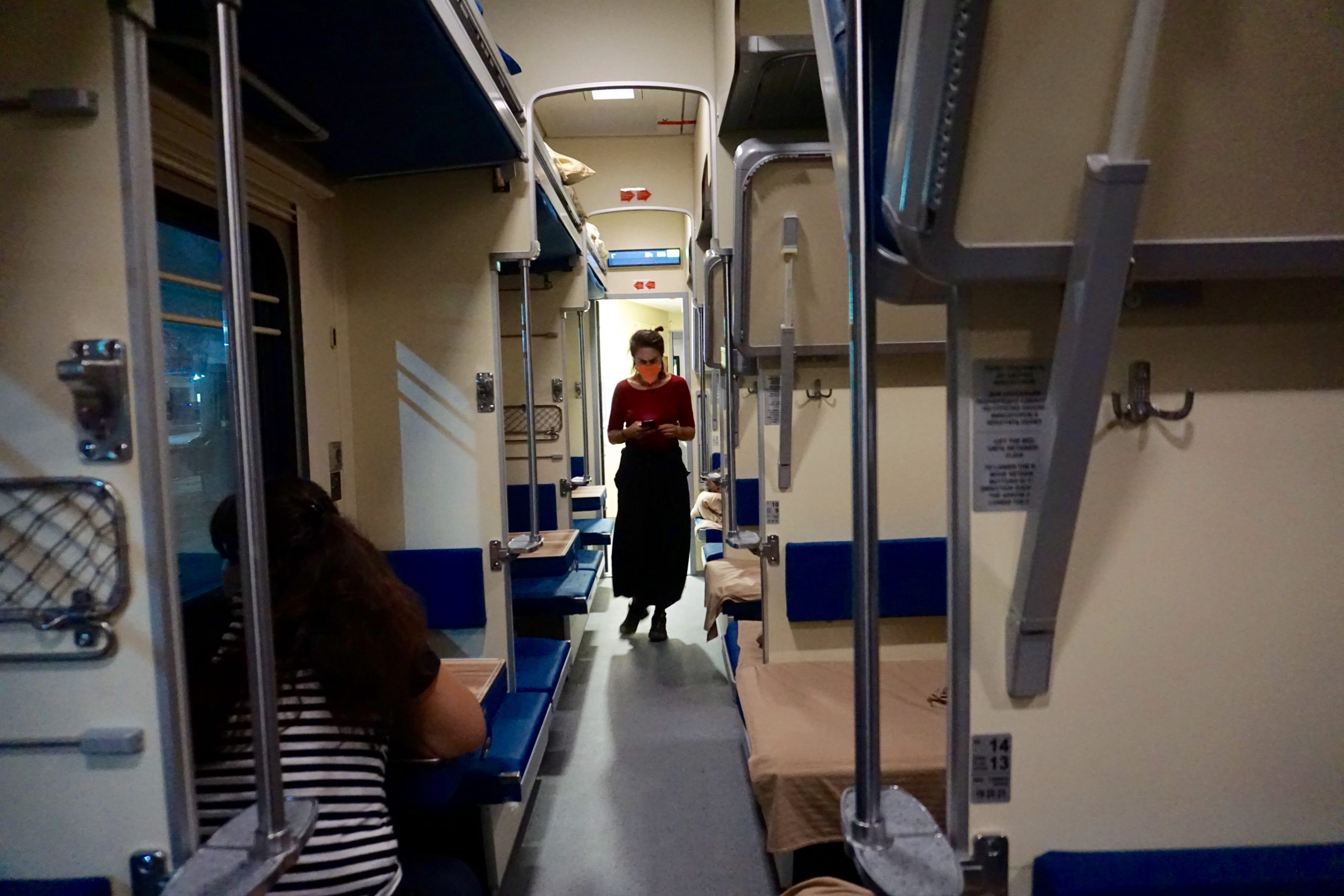 At the border, a long stop with passport and PCR test control. They didn’t want to see my vaccination.

But I remembered something: I had to take the PCR test, which cost 15 Euros. For that you get the double package: throat AND nose. There are test centres all over town. And mine was next to a massage centre. And it occurs to me: at that time I found Georgia full of gambling halls with poker and other offers. I haven’t seen any more of that. Instead, there are lots of massage parlours, preferably Thai. It seems to be better than gambling. 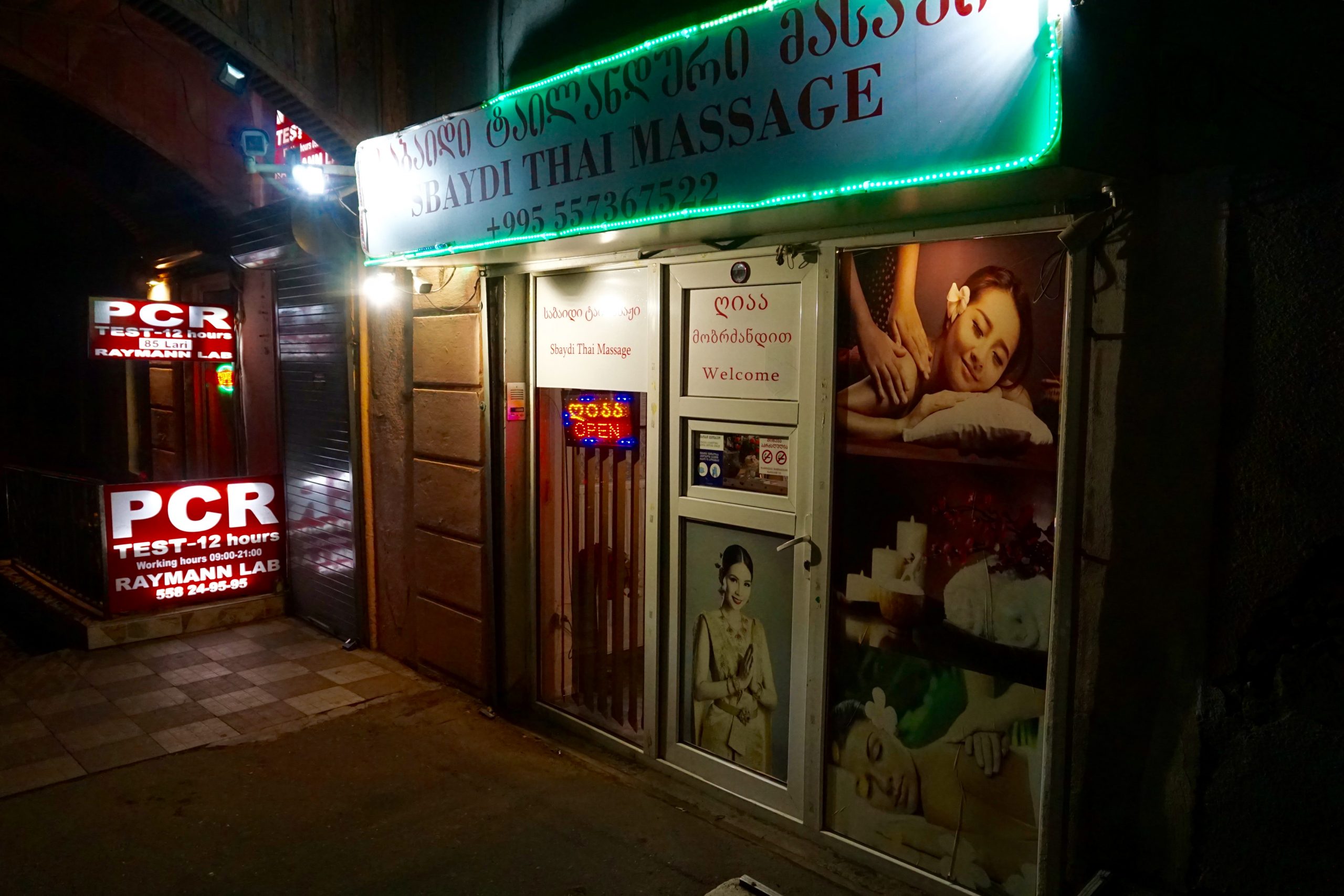 And from the next post there will be observations from Armenia! However, it will take a while, as I’m going trekking tomorrow without the pad.